Let me count: we had the first post about this raintree on the air layering post (check it out hither)
The second post was removing the air layers (tither)
And then the carving, potting and styling post (yon).
So, yes, this is the fourth post.
Its the 2nd wiring and styling post. But the fourth overall post. Got it?
Here is the current state of the deadwood I carved. 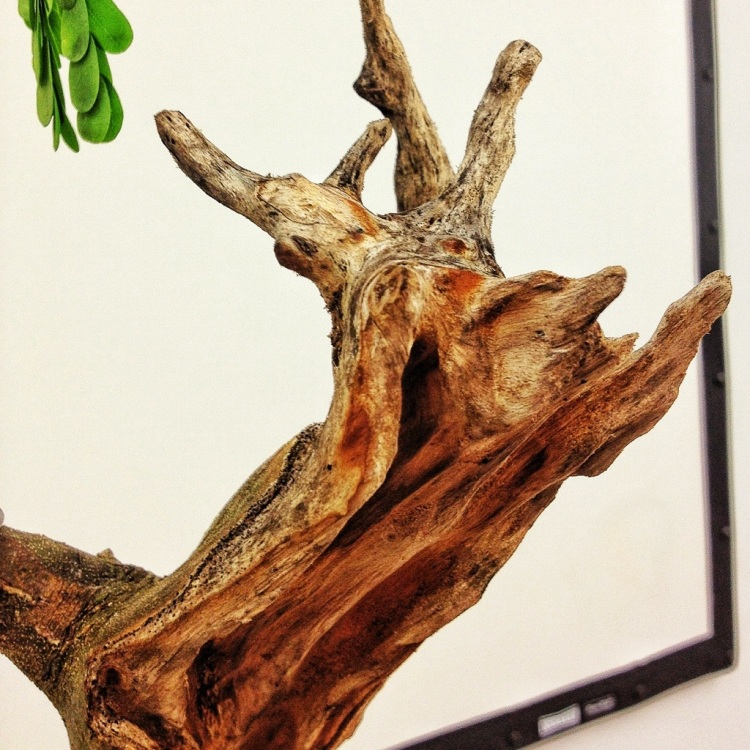 It’s ageing nicely. No cross-detail checking.
This, though, is how we left it last after that first styling.

If you remember from the last post (or if you just read the previous post) I left that tall branch on top to protect from dieback and to keep the trees momentum moving.
It worked. 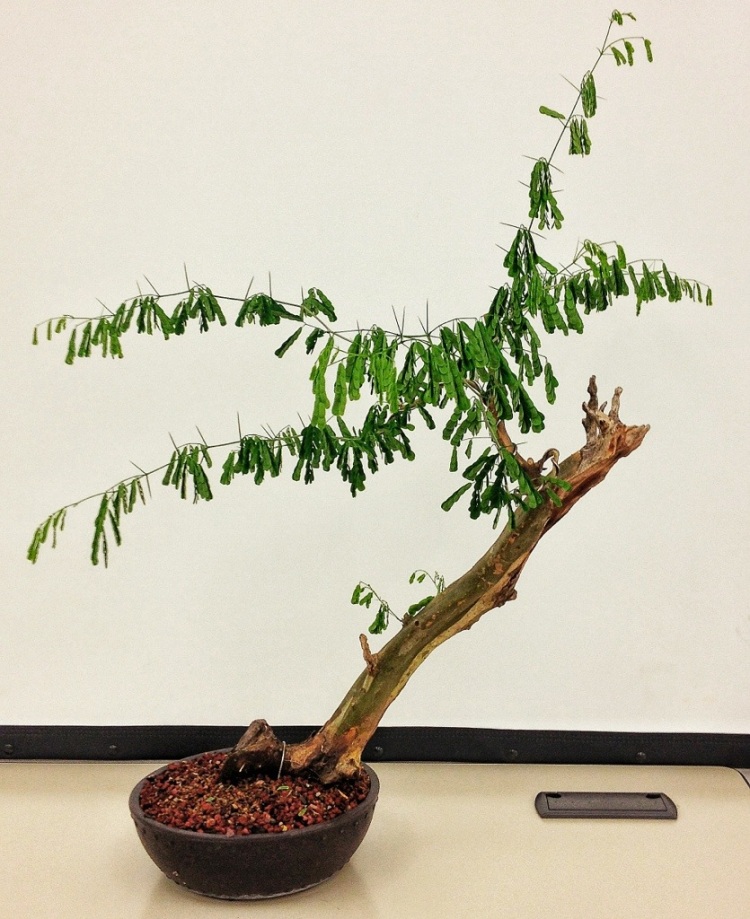 Here is the tree now. I’ve cut off that long top branch mostly, but not completely. I’m still worried about dieback.
Like here 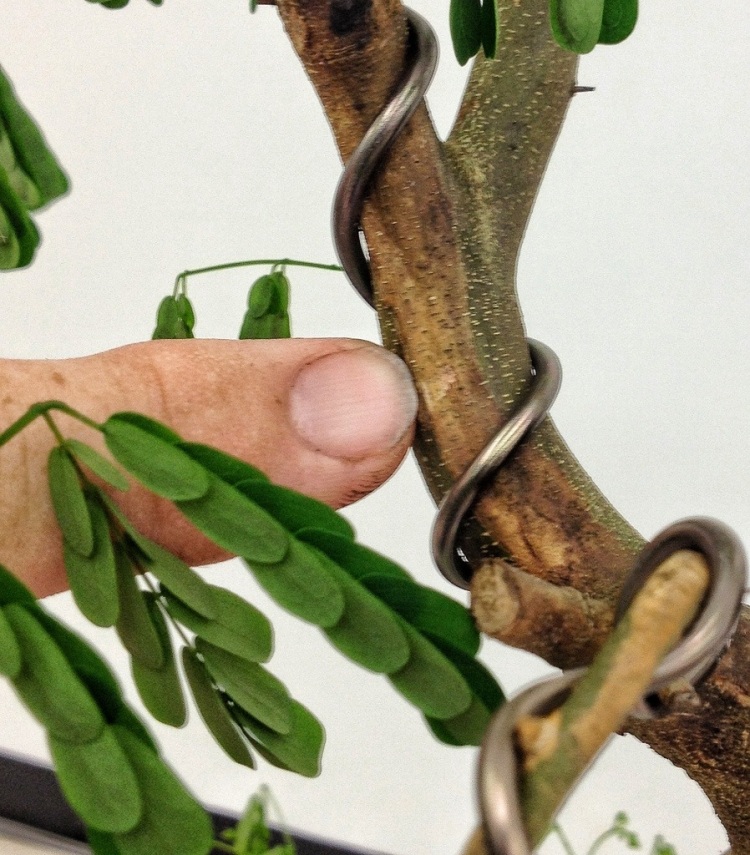 That branch is on the opposite side of the dead section. If I cut it, I could lose the whole thing. Caution and patience, my friends. 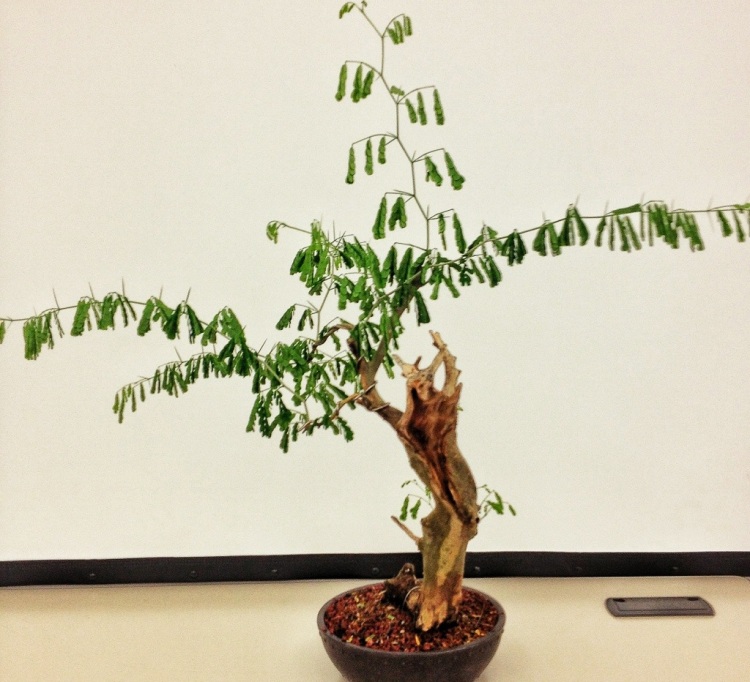 Here are some more views 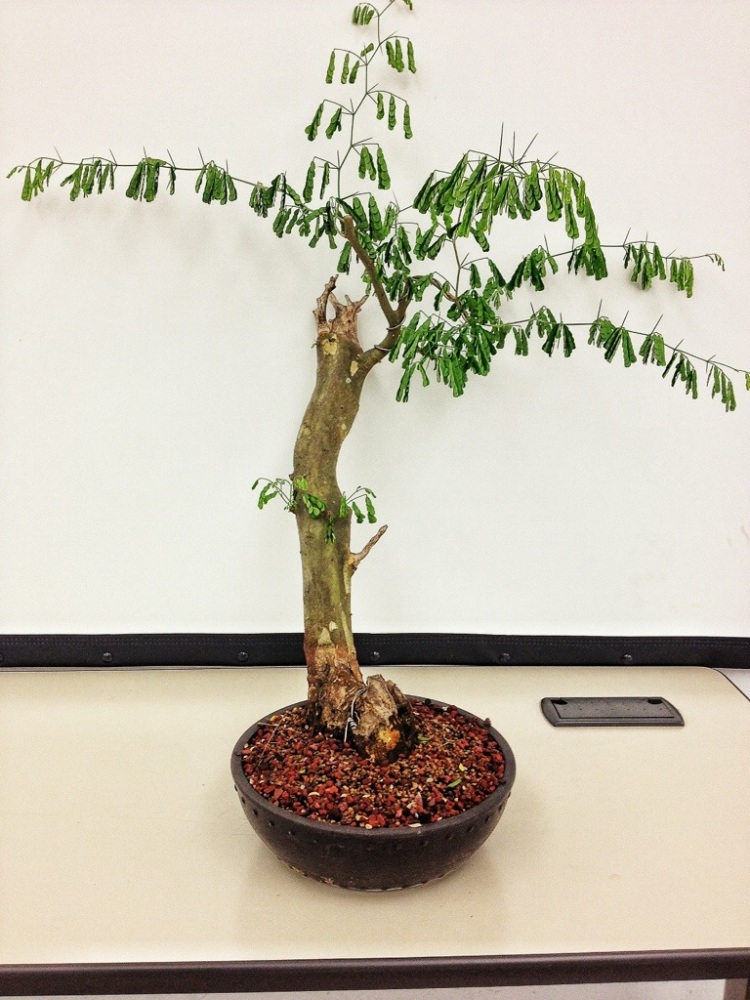 Right side, back and left side.
It’s growing well, I’ve not trimmed it much since last we saw it.
I have tried an interesting technique though. I don’t suggest it with smaller trees as it will increase internode spacing (the distance between the buds).
I put this tree in the shade. Yup! In the shade (I can hear the peanut gallery shouting “blasphemy!”) Why did I do this unimaginable thing? Well…
A tree wants to grow towards light. If it is in full sun it doesn’t have to grow those long branches reaching for the the light. But it still needs surface area of greenery for photosynthesis. Therefore the tree will grow buds faster than the branch can elongate, causing short internodes. The leaves will also be smaller because the more light, the more efficient the photosynthetic process is.
In the shade, on the other hand, the tree will grow the branches longer in search of the light. The leaves will be bigger in an attempt to catch as much light as possible.
Normally, we want short internodes and small leaves (more ramification and the leaf size in proportion to the tree) but this time, I wanted longer, quicker growth (which equates to thicker branching, which is what I need here) so I put the tree in the shade. Controversial but effective; using horticulture to get what we want. Hmmmmm. 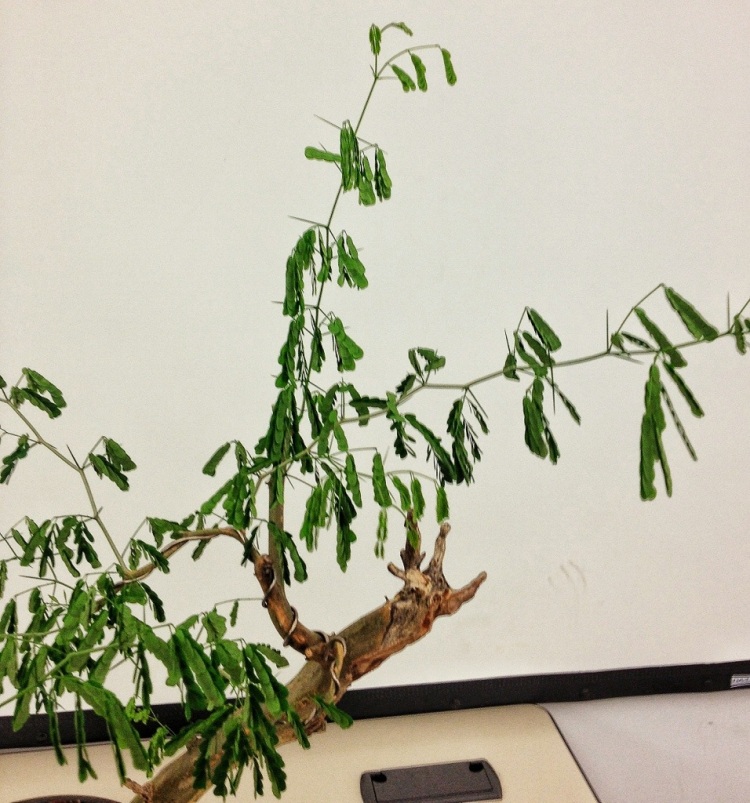 The new growth is long and leggy, but that’s what I wanted

Here is where I cut that long sacrifice branch back to a few weeks ago. I’ll cut it back one more node as I progress.

With the Brazilian raintree we worry so much about dieback that, when this happens, it surprises us. One never can tell where an adventitious bud might be. The raintree does have the ability to heal over a lost branch, and, since the tree has exfoliating bark, totally mask that callous.

This growth is the result of my leaving a ‘nub’ when I pruned it. To discourage this (if it annoys you), use your concave cutter or knob cutter and remove the “branch collar” (where those adventitious buds reside, kinda like stem cells in animals) 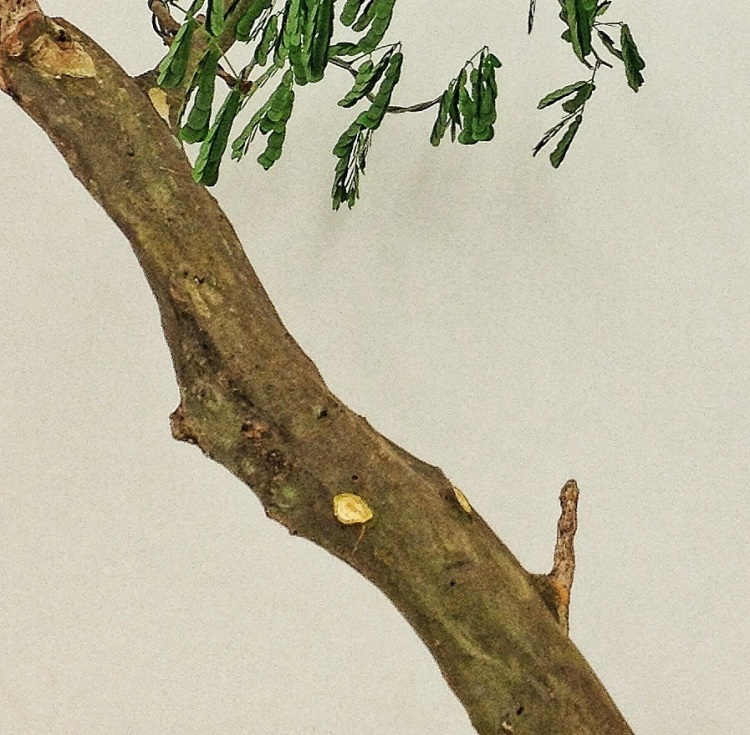 The cut is, as the name of the cutter implies, concave.
I remove the old wire- 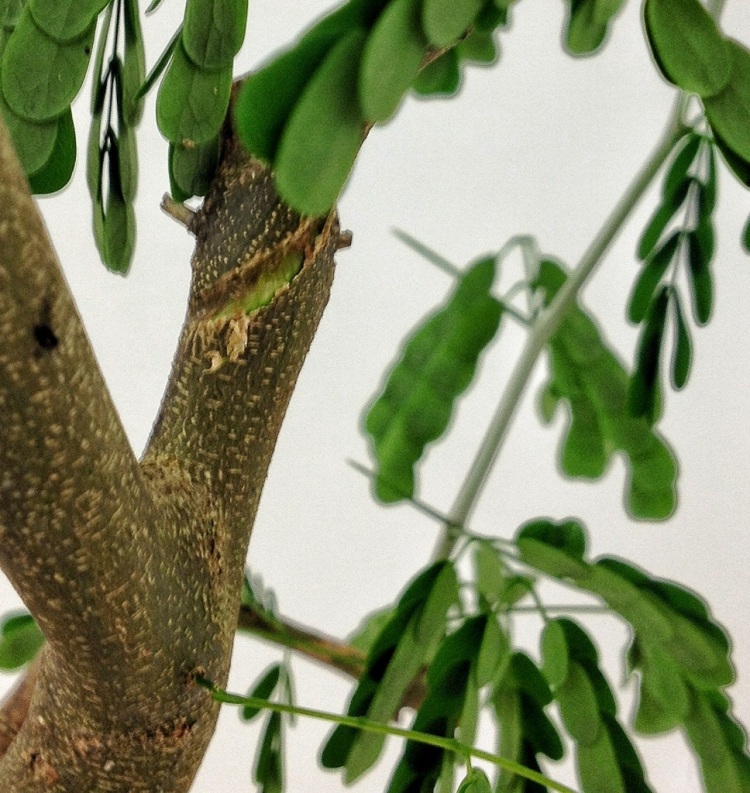 as it is cutting into some places (which we don’t have to worry about too much; remember the exfoliating bark thing) and I will rewire the new branches.

First, we declaw it!

Here’s an example of a “clip n’ grow” success. Ifn’ one had a hankerin’, one could spiral this tree into a spring with nuthin’ but the “clip n’ grow method. 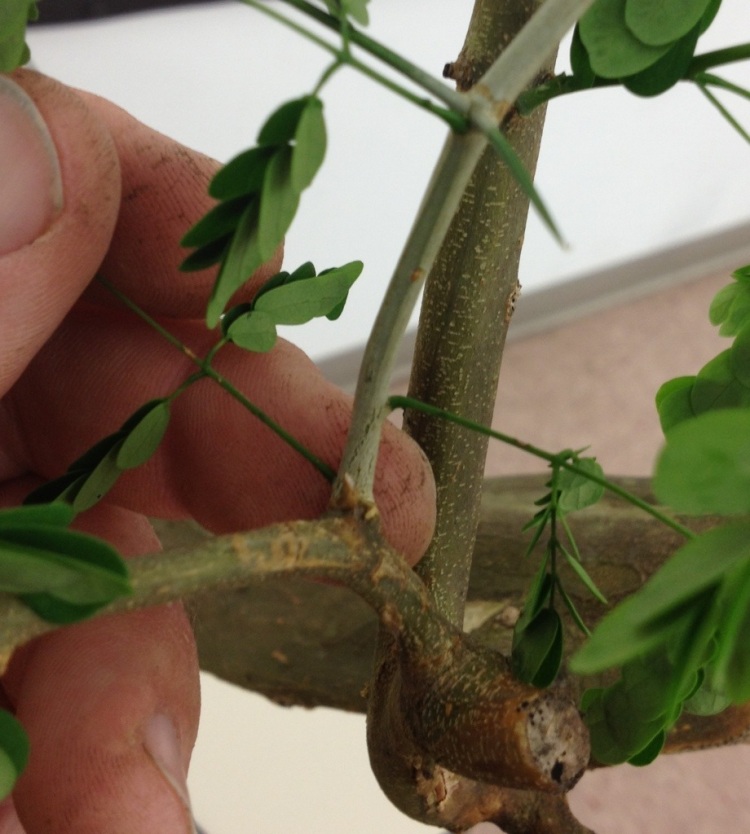 Now for wire. The branches are pretty flexible at this stage. This small gauge wire will hold it.

If you look down at the branches the bending is a bit uniform, though I have followed the principle of bends where branches occur. From the front it’s not though, which is how we look at it anyway (except for me: I’m the guy in the exhibit looking up and around and sideways at the tree. I make security nervous)

It’s a little hard to see.
I normally defoliate a tree like this when I wire so that the branch line is more obvious, but I’m trying to get as much growth as I can before it goes into winter mode. So the leaves stay on.

In order to break up the uniformity of the line I can cut where the arrows are pointing. And I probably will, after the branch has thickened, to induce taper. Just not now yet.

There’s a cool angle.
And a detail 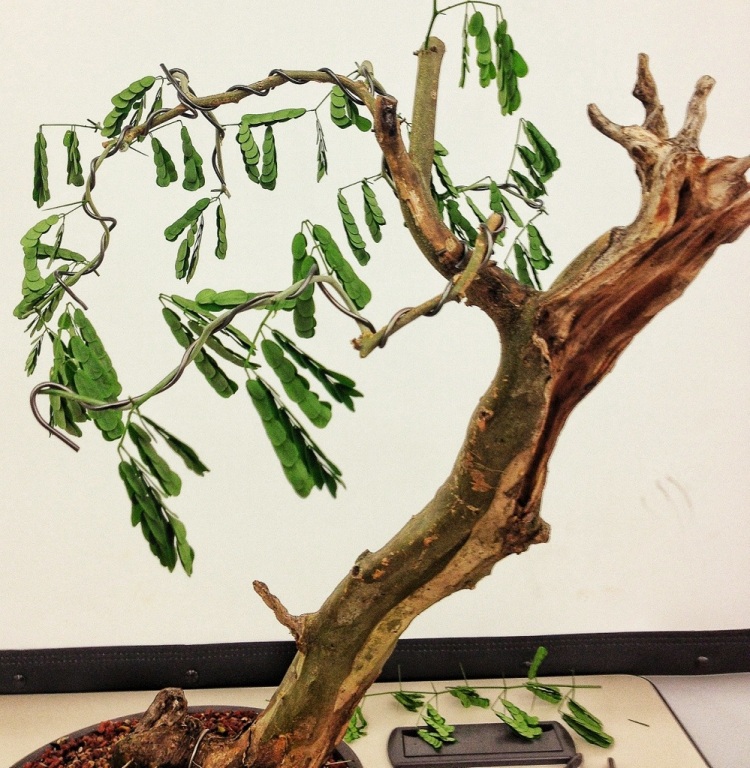 The sacrifice branch does stick out.
Lets play around a bit

There it ain’t.
While we’re at it. I see a spot in the carving I have to fix. 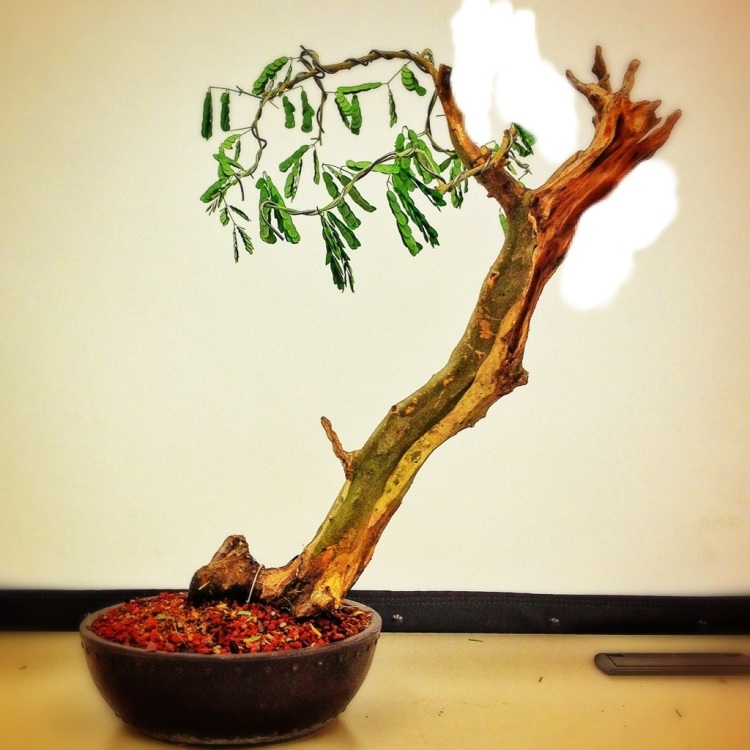 After. I could style a tree completely in photoshop. I hear there are people who do.
I won’t though. I’ll post updates when it grows. Much easier that way.
Here’s a treat 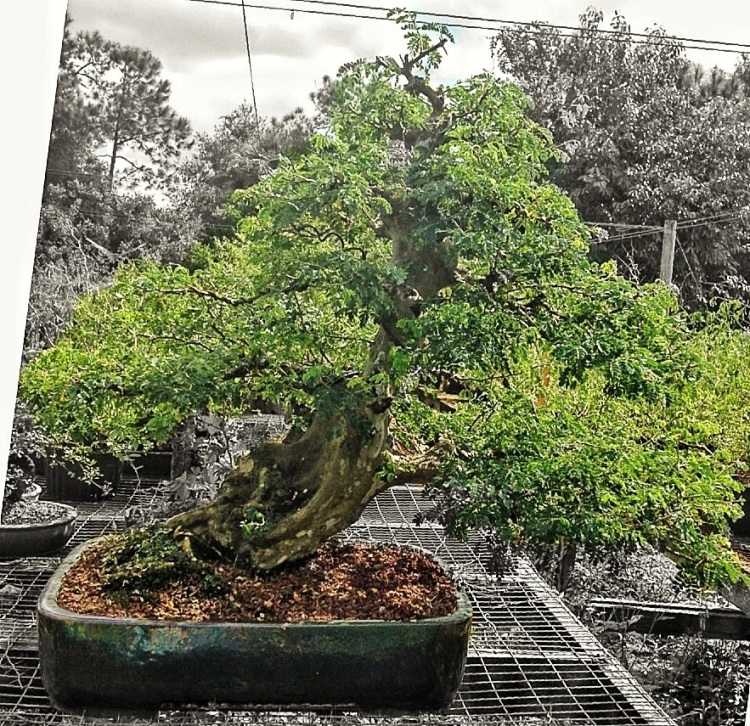 This Raintree is the original one that Jim Moody grew here in Florida. This tree is the one that most of the Raintrees in the U.S. are cloned from (when you take a cutting, you are technically cloning. The tree is genetically identical)
It is now the property of Allen Carver, Jim’s grandson, and it is living at Jupiter Bonsai.
Check this link link for a good article on it.
As usual, I’ll post updates. Look for them next year. I still have pot selection and 4 or 5 more wirings to go. And lime sulfuring.
‘Til next time, dear readers, I bid you adieu and, as we said in my youth-
“See ya’! Wouldn’t wanna be ya’!”