This was Dave’s birthday present last year. Jerry bought it and I styled it.
It was done with the option of being either a cascade or an upright.
Today…..well, actually a week ago… 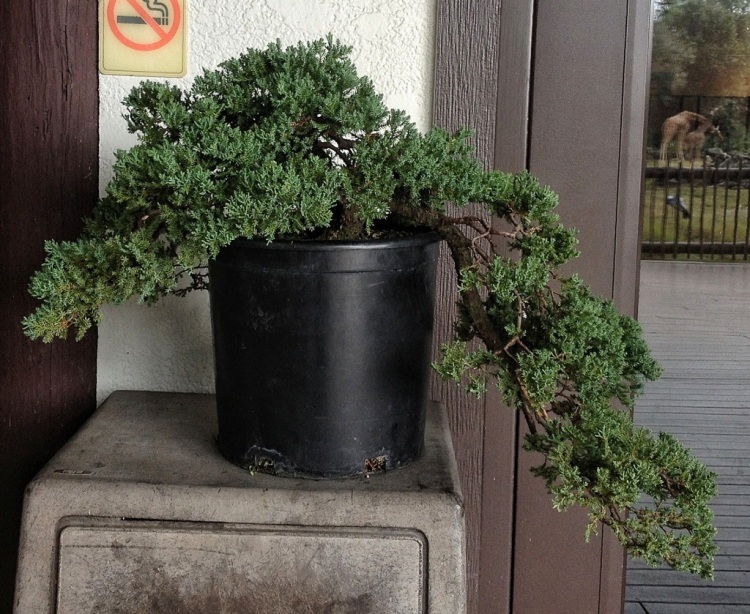 As it is, its like, as Guy Guidry likes to say, a rabbit going down two holes, wait, that’s not right…. Like two dogs chasing a rabbit, nope, uh…. chasing two rabbits at one time? Sorry, I’m not good at folksy homilies.
Anyway, the tree is confuseled, disjointed, and un-hip, like, lacking in style, like a square. It has two masters, and is serving neither well.

The side.
It has grown well in the year. Most of the original wire has been removed.

It has a nice trunk with movement. The species is Juniperus procumbrens “nana”. Though perhaps it could be Juniperus squamata. The man we got it from seemed to think so.
I will say, this has mostly needle-like foliage. Or immature, if it were a procumbrens.
The main problem with the cascade style on this tree-

is the cascading branch. It has no taper. Just as the main trunk on an upright should be thick at the base and taper to the top, the same applies for that cascading branch.
Soooo…no more talk. Snip 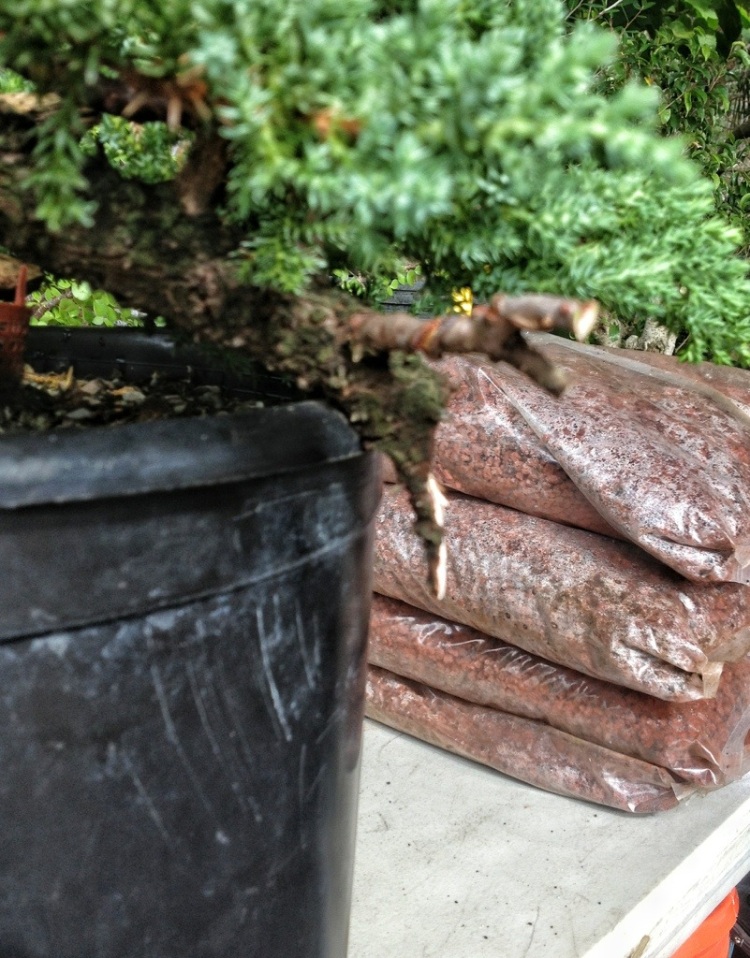 That was easy.
By cutting this off, it gives us an opportunity to introduce more deadwood into the design. And, as they say, ” The difference between western junipers and eastern junipers is the amount of deadwood.”
Out come the Jin pliers 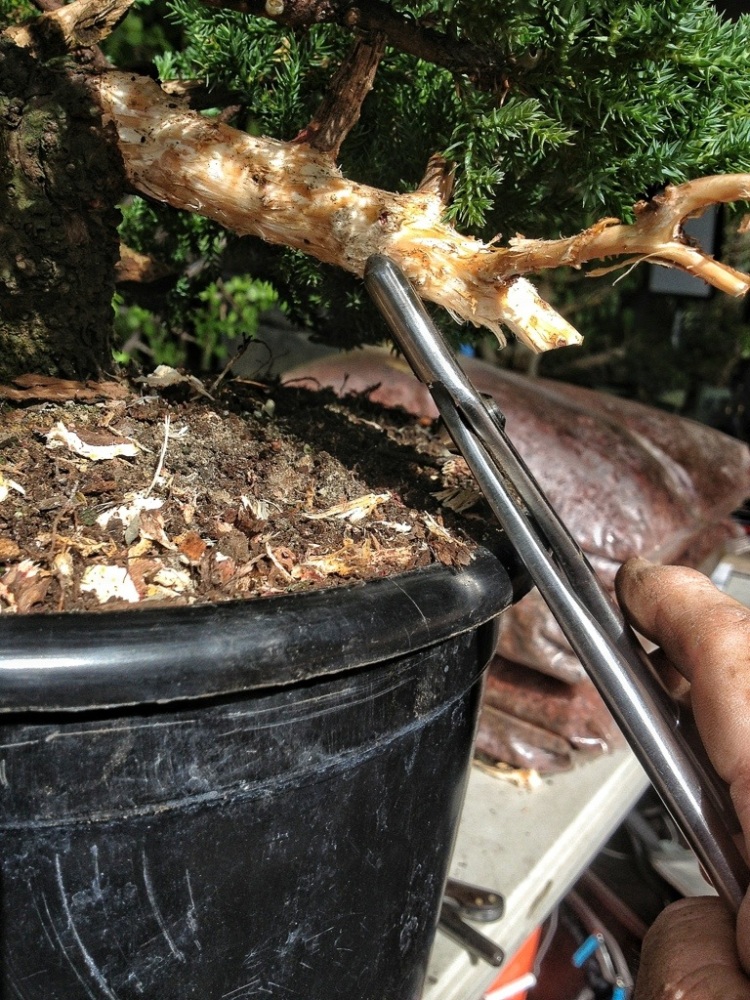 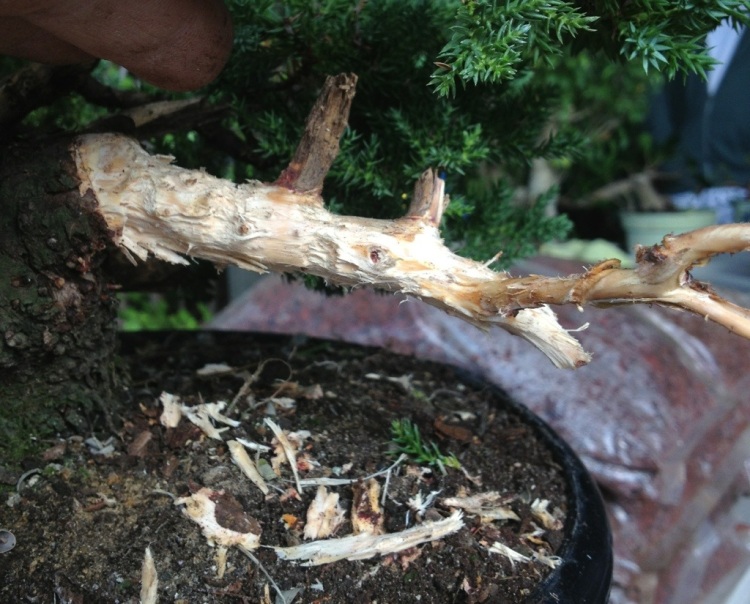 Next, lets look at the other side.

These branches are too long. They actually cascade over the other side.

And they obscure that trunk with all the soon-to-be spectacularized Jin.

Now, to clean out the unneeded buds and browned out foliage. This time of year I get a lot of emails and calls saying ” Oh no! My junipers are turning all brown!”
Not to worry, it’s just old foliage that’s not needed anymore by the tree. As long as the tips are nice and verdant you have nothing to worry about.

Here we are. Front.

And this was the cascade side.
Now for some wire……
(One week later….I don’t usually wait this long but, hey, I’ve been busy.)

That’s Dave wiring the tree. We are at the CFBC anti-Black Friday workshop. 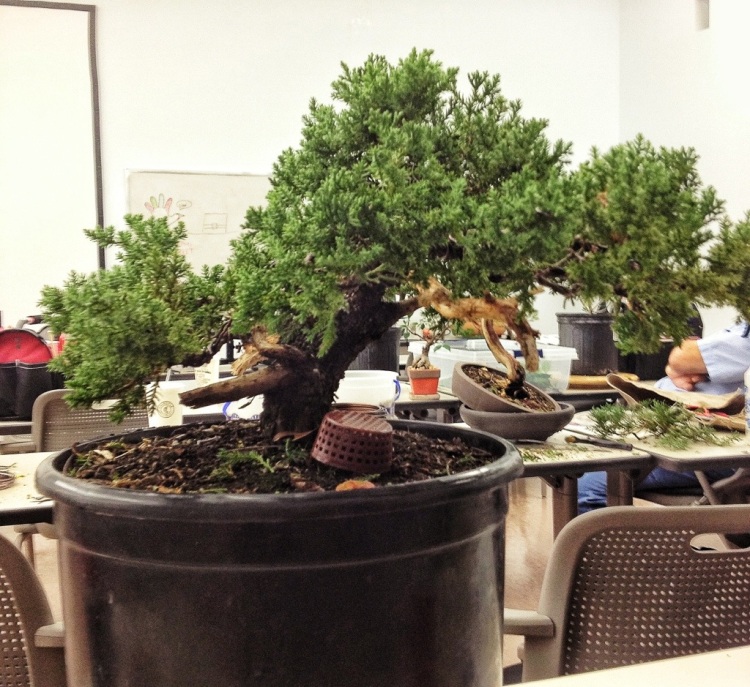 Looking at this tree so much between the pruning and the wiring has given me a different idea.
I do believe I shall change the front. 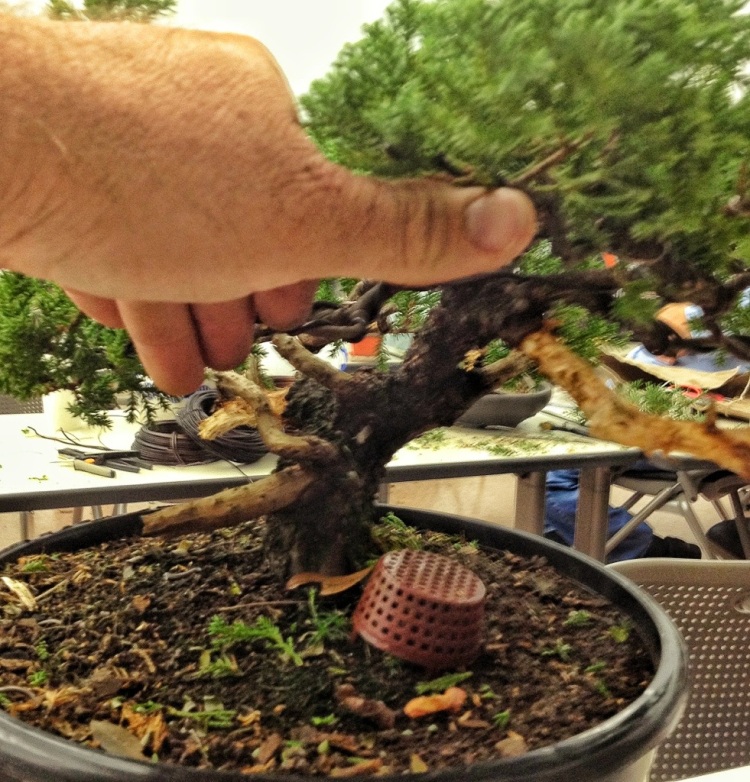 Hmmmn. It’s just a matter of turning it until we can see the movement and Jin to the best vantage and arrange the limbs just right and 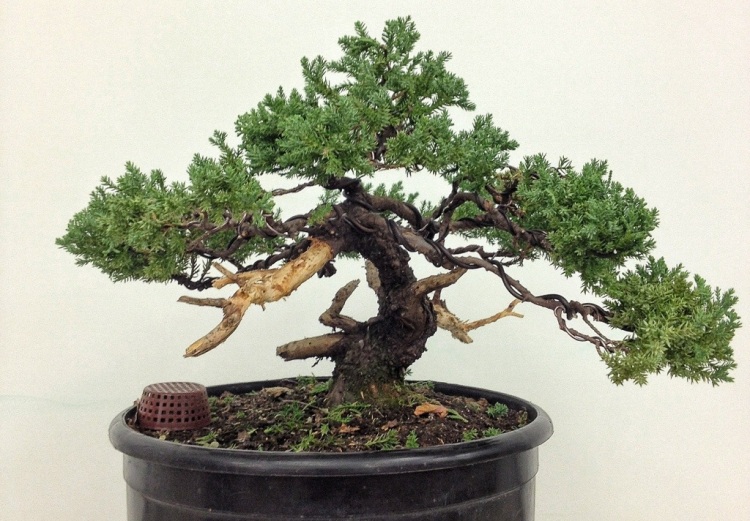 There we go. I think that looks good. 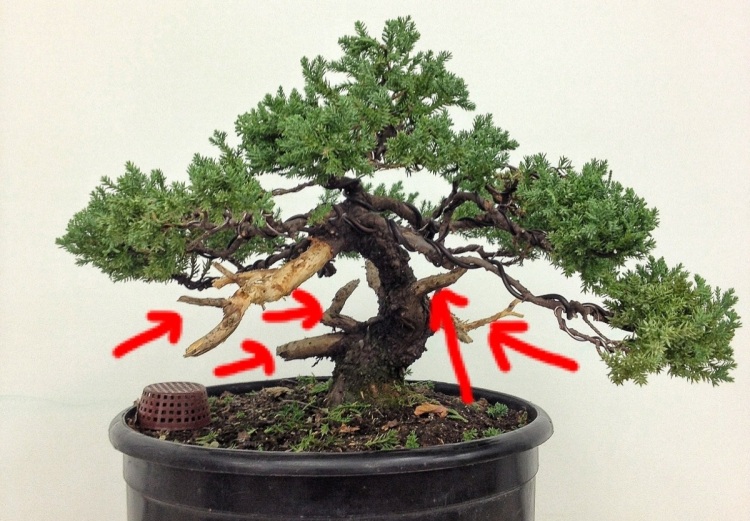 Except for the Jin in the rear the arrows are pointing to them all. Excellent.Nice and visible deadwood. 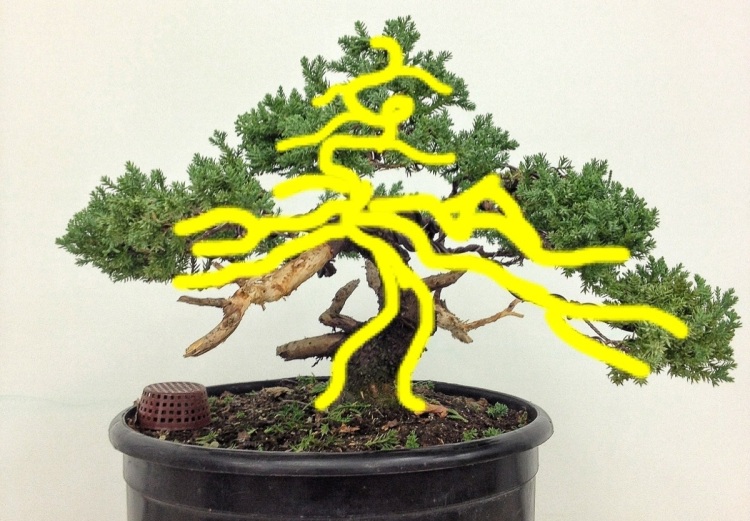 And the yellow lines show the movement. It kinda looks like Peter Warren at the disco.

Well, maybe not. The tree has a little more movement than that.

This is one side.

It has a bald spot here. A little spray on toupee should help.

And the other side.
Here are some detail shots:

The cascade form bonsai is a hard style to pull off. It must have the right angles and proportions or else it looks like you just tipped a tree over because you wanted a cascade.
This tree was not really suited for it because the trunk lines are too good to make them secondary to the cascade. Which should be the main event.
A cascade should appear as though its sprouting from a crack in a cliff, reaching out and up but, because of snow fall and rockslides, keeps getting beaten down and bent.
Just because a tree has a long, dropping branch doesn’t mean it should be a cascade. Therefore it wasn’t all that difficult for me to remove the cascade.

Parting shot. I’ll update you when we will repot it in late January/early February.
Happy birthday Dave!