This weekend we had the reformed (unreformed, just as mean as ever) NoNaMe Bonsai study group’s first meeting after an almost 2 year hiatus. 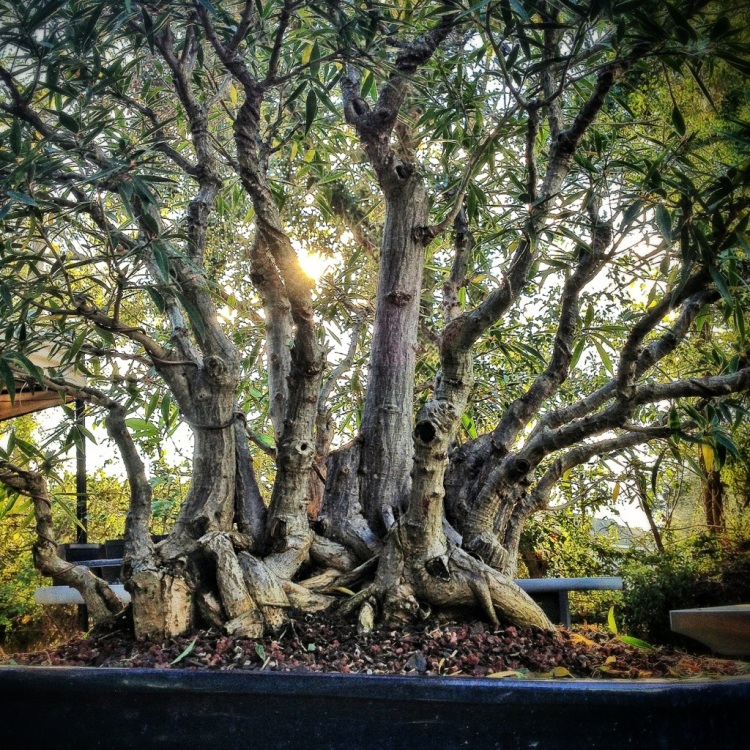 The actors in our merry revival are 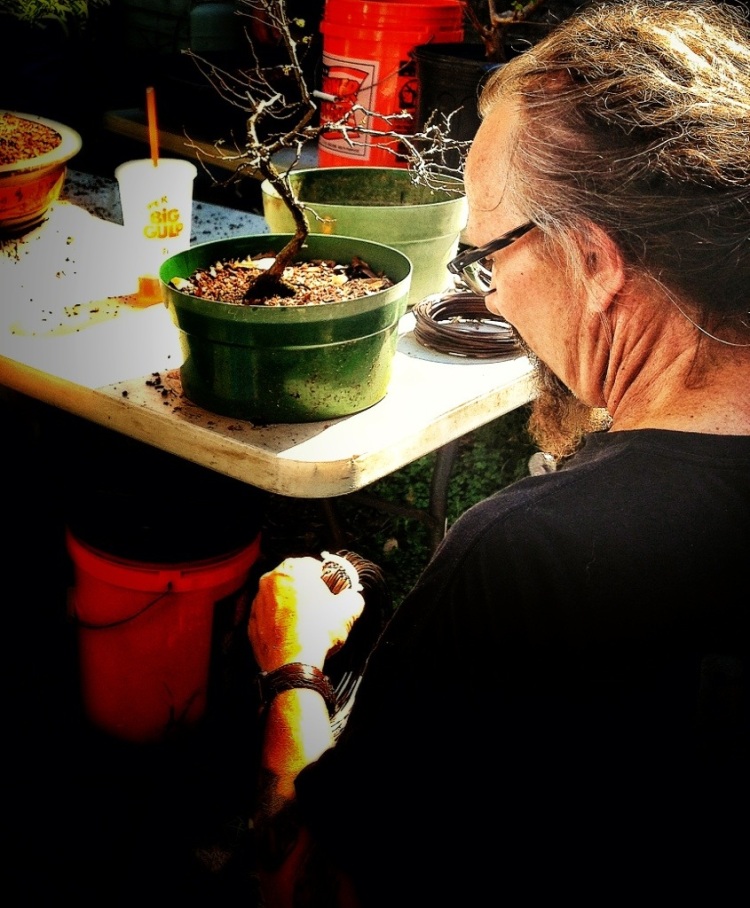 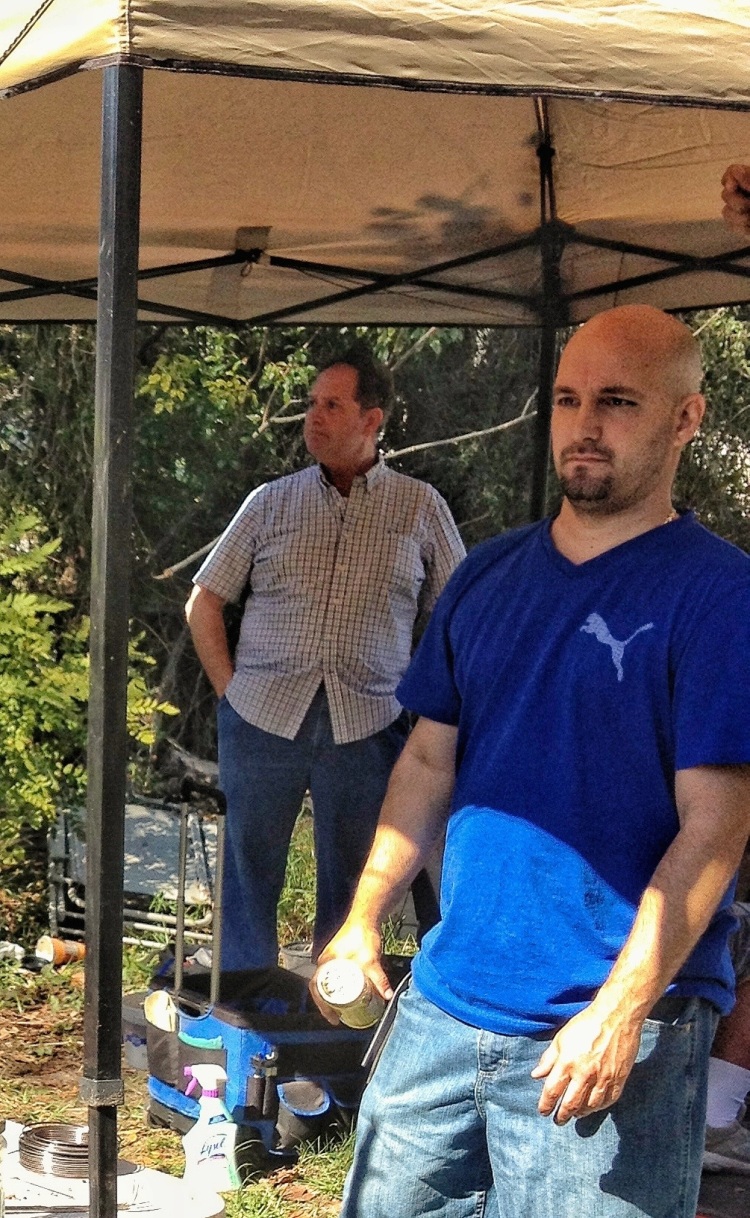 Me, one cool dude.
Actually this is a better portrait of me 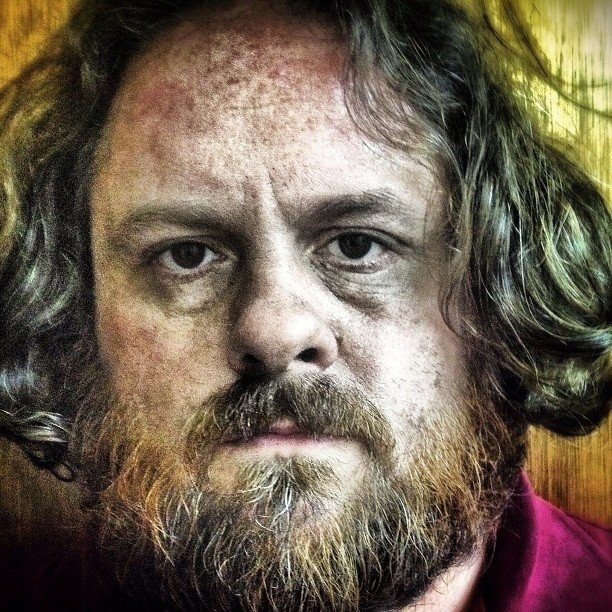 So what, exactly, is a study group?
It is not a club, as most clubs are set up. We don’t have raffles or coffee (copious amounts of beer and tequila though) or elections or outreach (aside from the “Hey man, we have a study group, wanna come”)
We could become official and join the Florida state conference, Bonsai Societies of Florida, but we probably won’t. Too lazy.
A study group is a place to focus on specific techniques instead of generalizations.
Generalizations should be for the club meetings:basic design, horticulture and such, where people from all levels and skill sets can learn.
The study group is for those asshole know-it-alls (like me) to learn new stuff.

But enough bragging.
Should you join a study group? Maybe, maybe not.
If you do you, you should have a thick skin and a quick wit (especially at our study group. It gets thick) All trees in a study group situation are put up for tearing down.
It is an opportunity to see great visiting artists in a critical and intimate situation instead of a club meeting situation.
Next month we have Guy Guidry coming.

(Members, be prepared for him- Legendary are his deeds.)

This tree was an air layer.
Which is hard to do on a trident maple (Scientific name: Acer buergerianum)

I’ve had it long enough to heal this wound. Don just bought it from me (on the condition I was allowed to do this operation)
We gonna do some thread grafting!
First we need a drill and drill bits.
And some whips

There they are.
Why am I using a thread graft and not any other kind? Because I am technically inept and this technique is just about idiot proof.
No, really. 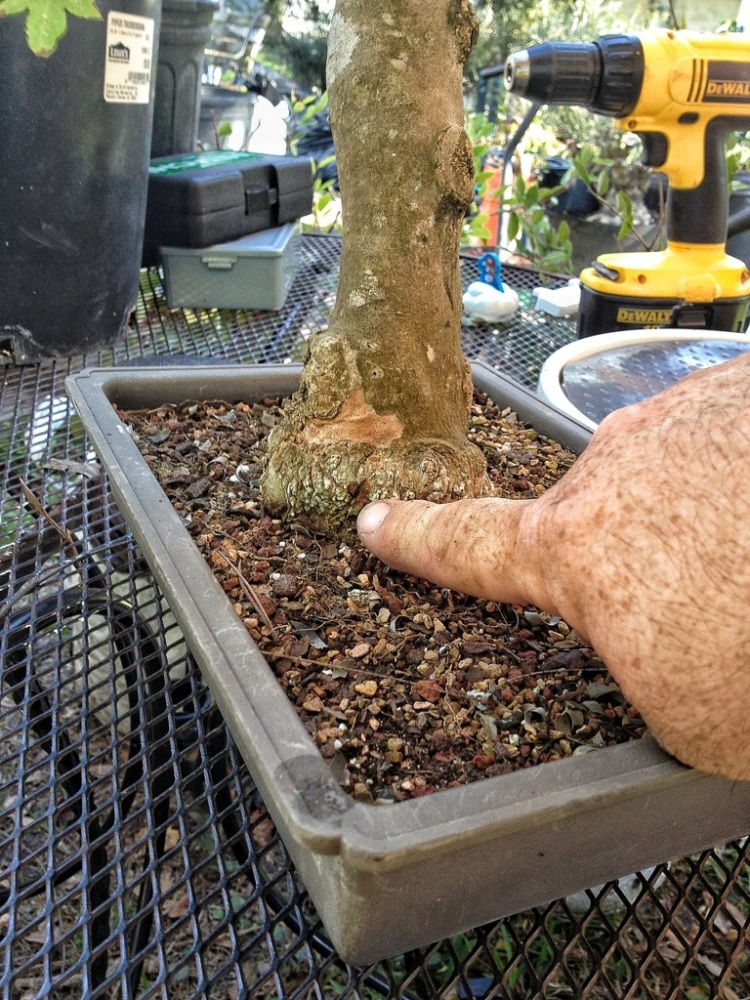 We need a root here.

And a branch here.
Let me show you the roots 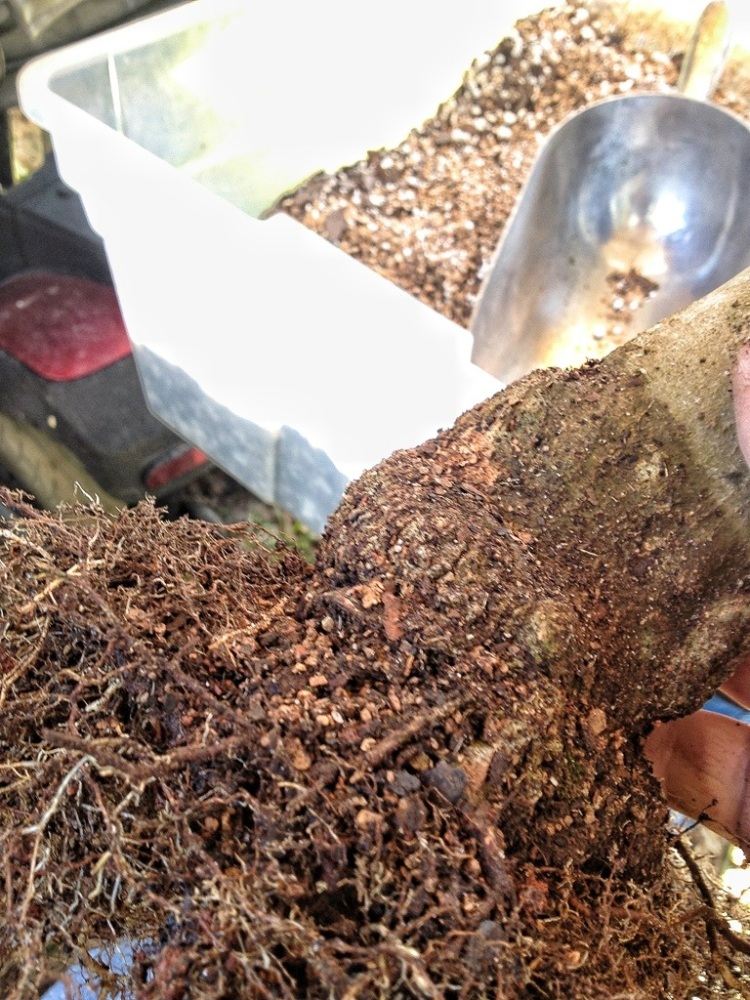 Being an air layer and, as such on a trident,it took a long time to produce roots. The trident is more inclined to heal than not, so, if you try an air layer you need to make the gap bigger than you think on the ring cut. 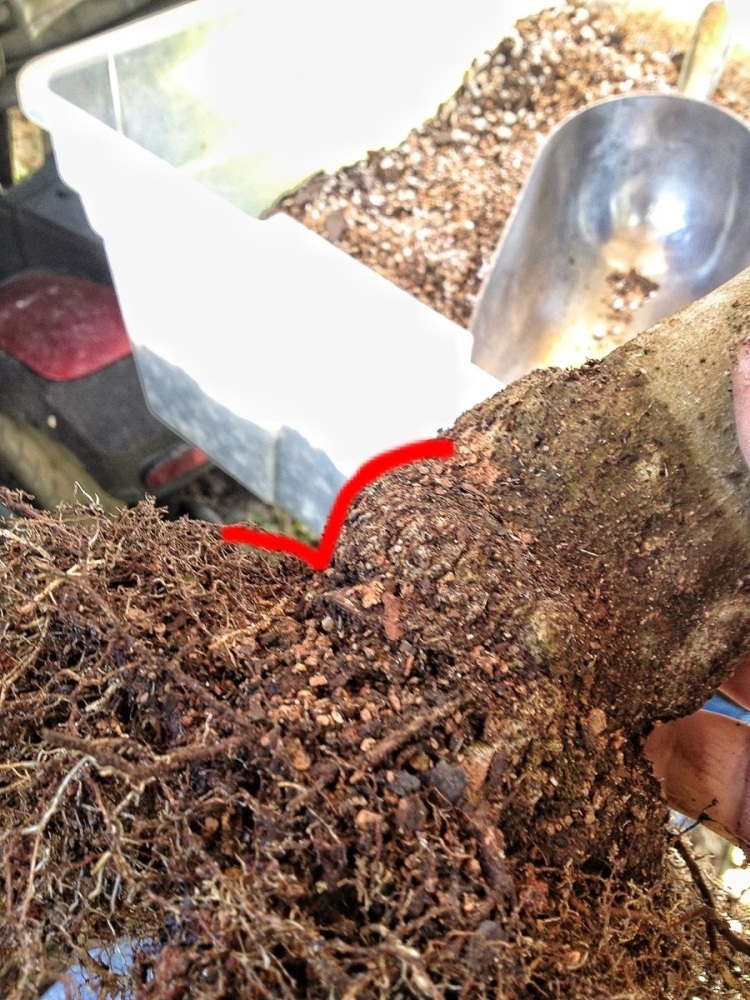 This v doesn’t look good, you want the roots to rise out of the soil in a nice, even arc.

By putting the root here (blue) it should fill in nicely. 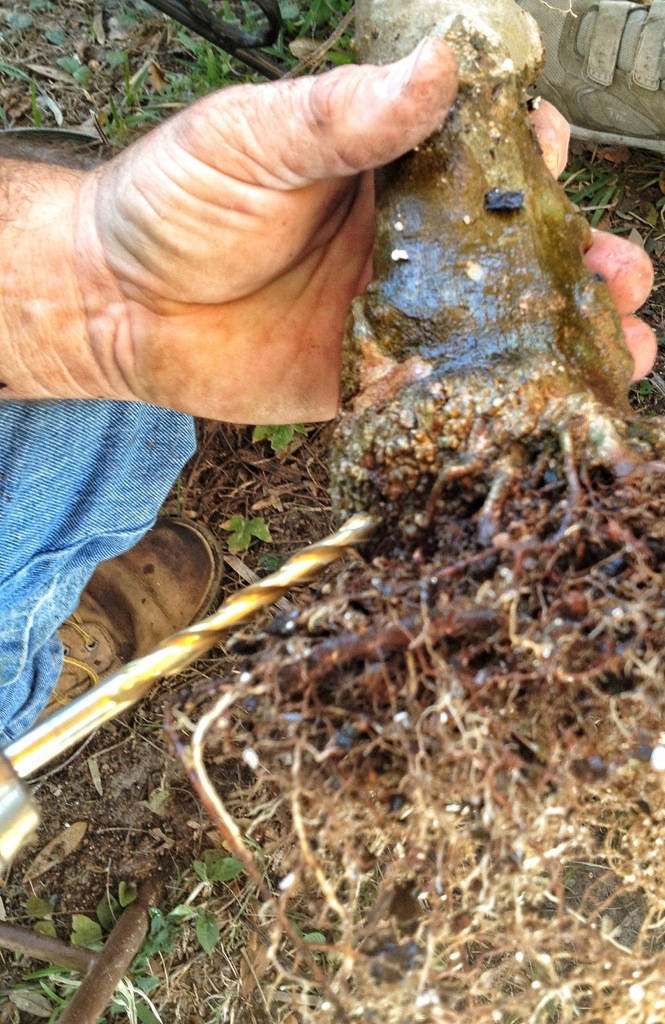 And, since that’s hard to see, I have outlined ( in red) the roots for you (I’m such a gracious blogger).

And the exit wound. This will be cut off when the graft has taken. 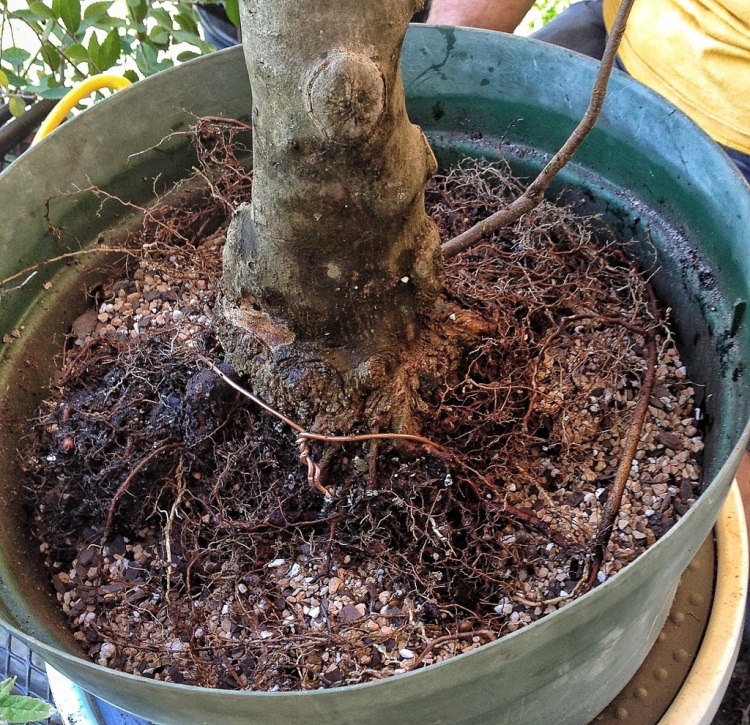 Repot the tree with good soil.

We tied the tree in and put the wire over the graft to secure it.

There.
Now the branch.

The part we shall keep is the branch on the left. 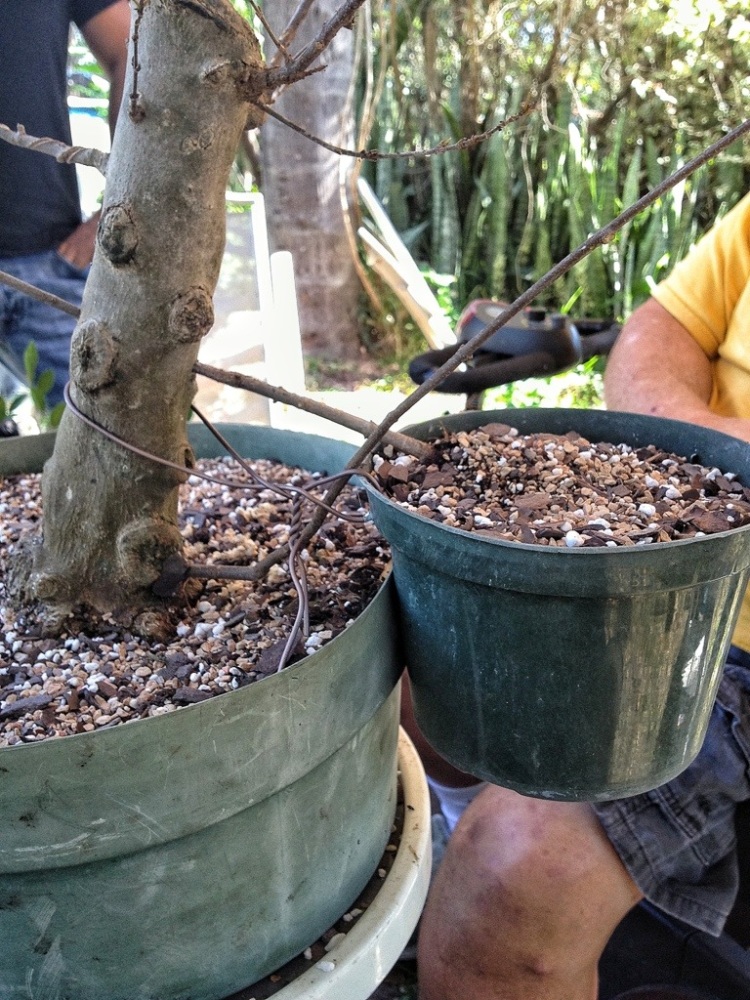 It will get its own pot. We don’t need it’s roots.

The colored lines are the grafts.

I made sure to seal the exit and entry points with cut paste (putty style). 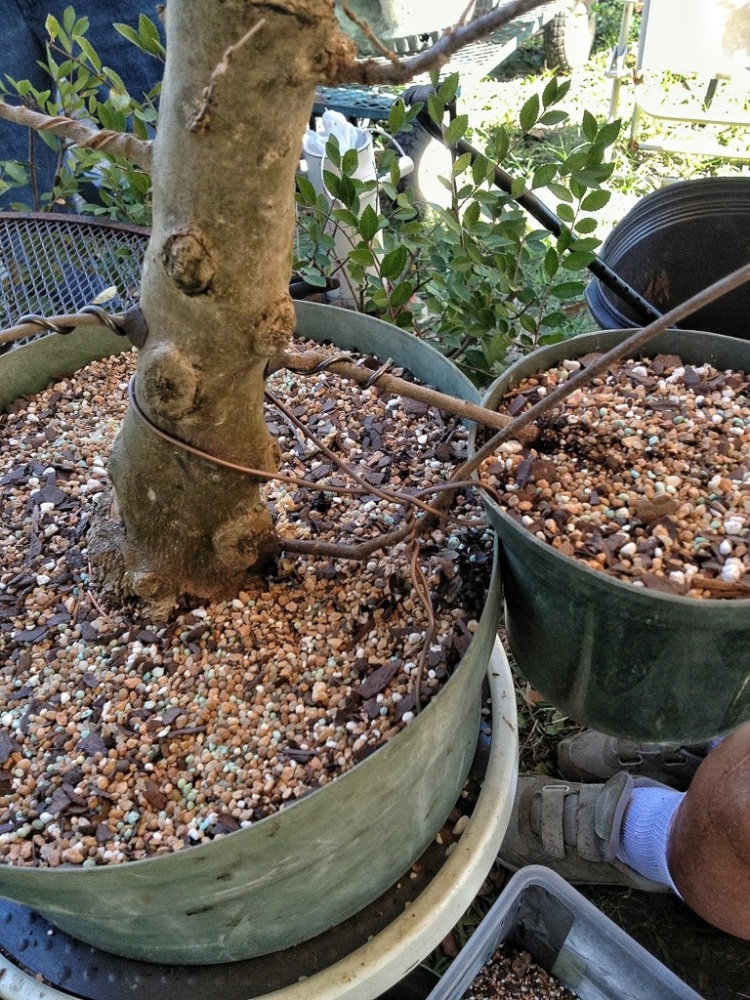 Make sure everything is tied together tight. We even put black tape around it to help immobilize the pots.
Like Don said “That’s slick, I like that”
Here are some more pics from the day 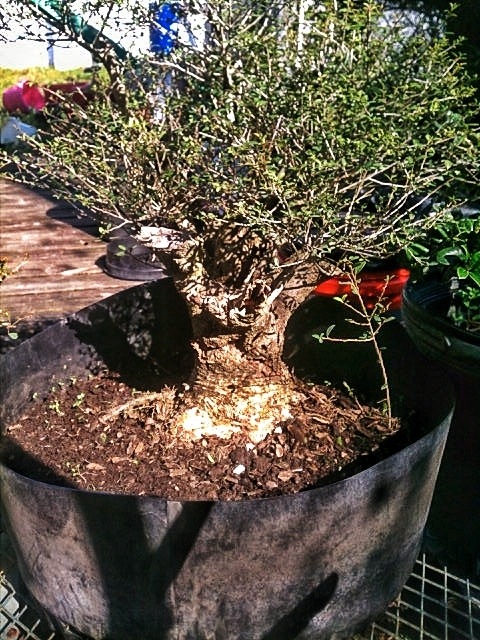 We repotted my Epcot display tree 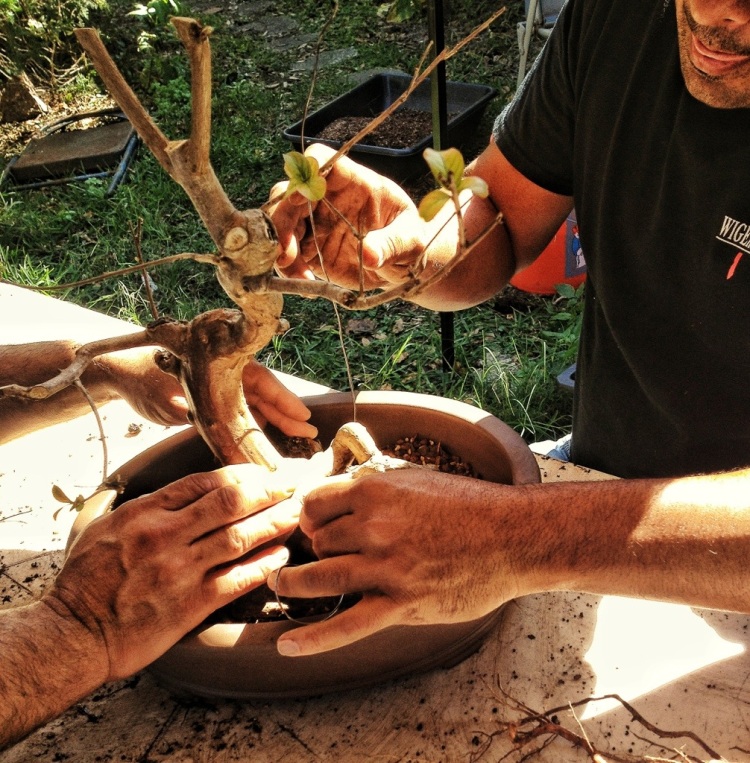 With a pretty impressive root spread.
We missed some people
Walter, where were you man?
Paul, sell that house soon.
Jerry, I know your party was more fun…..no it wasn’t.
Mike L, what happened dude?
Rick? We were lacking in your Old Wise One knowledge. We seemed adrift.
Sandy?
And the rest of you, you know who you are.
See you next month with the Ragin’ Cajun hisself Guy Guidry.
Hide the women…..