These will be quick updates as I did little to them but repot so…….
The first tree is the male ilex vomitoria from this post (clicketh hither)
It was time for a new pot.
If you remember, this is not the dwarf (schillings) but just the male (a holly is dioecious. Meaning there are male and female plants. They both have flowers but only the female can make fruit.
In this case, the male is also smaller in stature than the female.

Next we have the “old ilex” from these posts (part 1, part 2 )
If you recall, I up-potted the tree (slip potted) to increase vigor and increase growth. I recently removed all the wire and added one thin piece back (I think)

The root pad is still like a brick; to remedy this I took some small wedge cuts out of it: 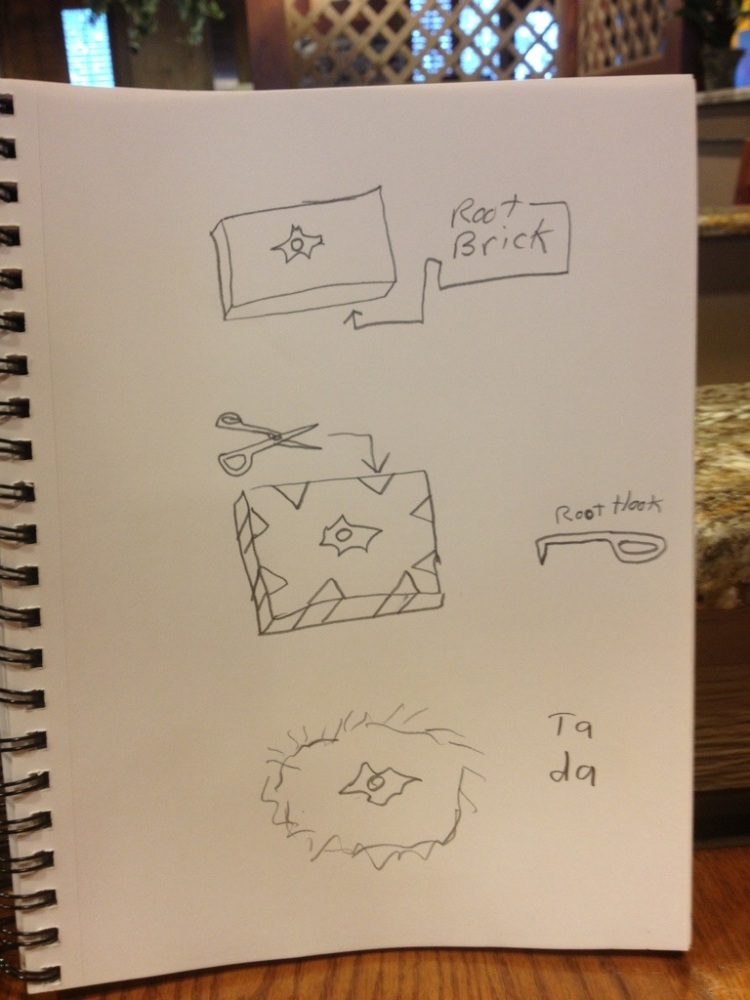 And you end up with this

It’s a mica pot, which used to be cheap but are now more expensive than ceramic. The allure of the mica was the supposed insulating properties, the dark color keeps the roots warmer in the winter and the thick walls keep the roots cooler in the summer. And they don’t break.

The tree is coming along well I think. 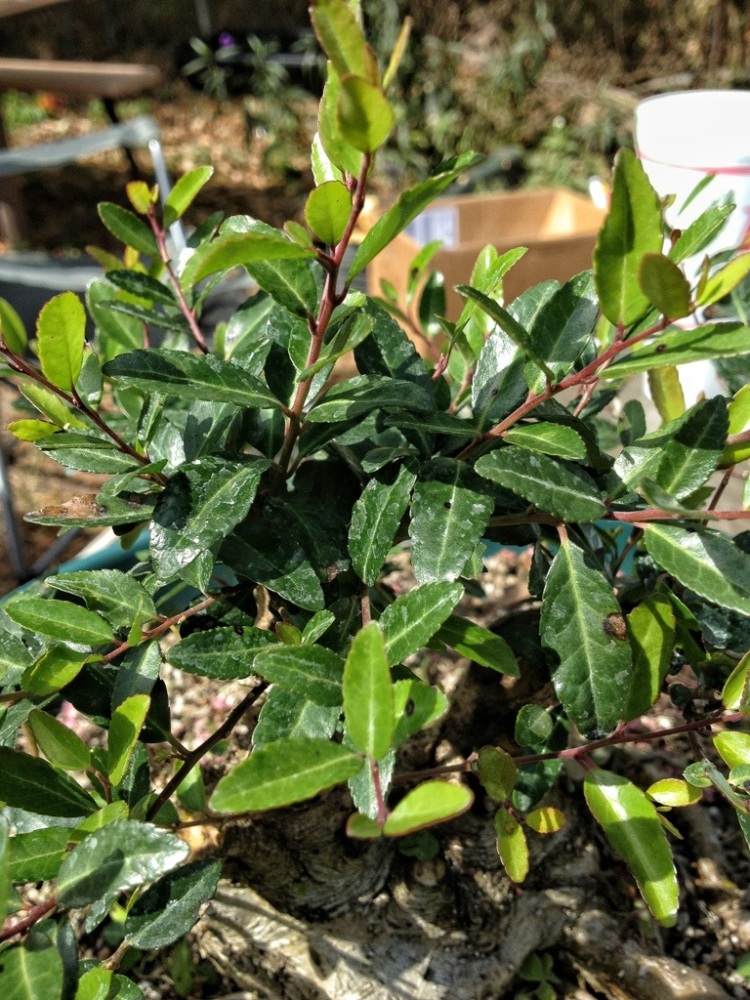 I also have a touch of black spot fungus on it. To control it I use Bayer Advanced Systemic fungicide. 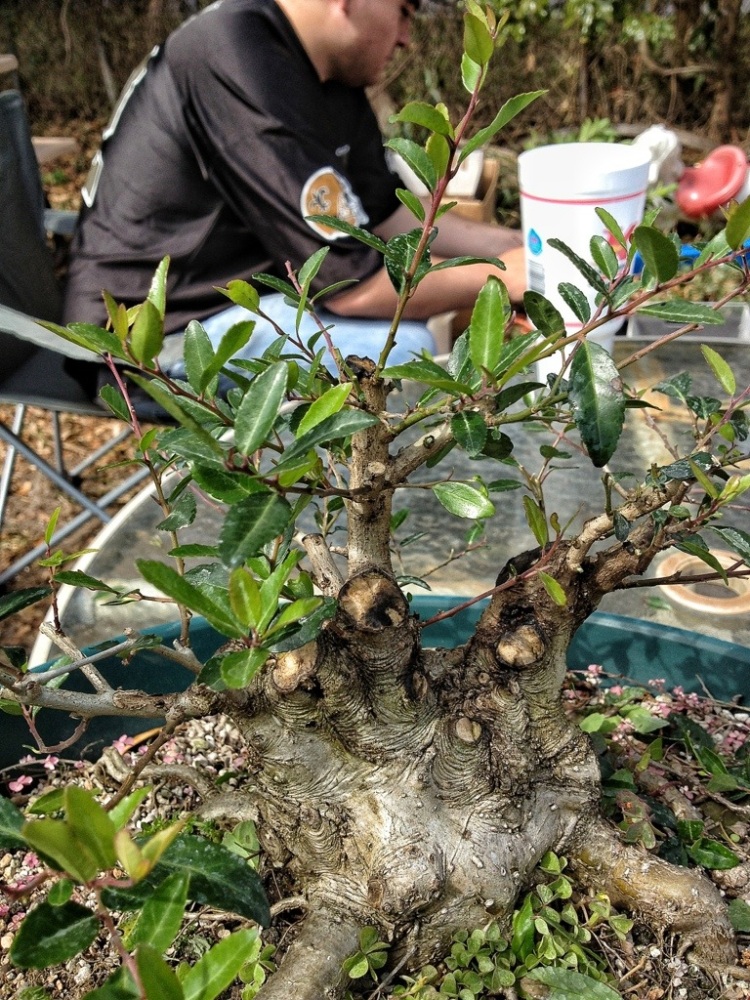 At this stage (and at this time of the year) I am removing the bigger leaves and those close to the branch crotches and bases. This will let the light in to stimulate more branching and it will also let more air in (which should help with the fungus) 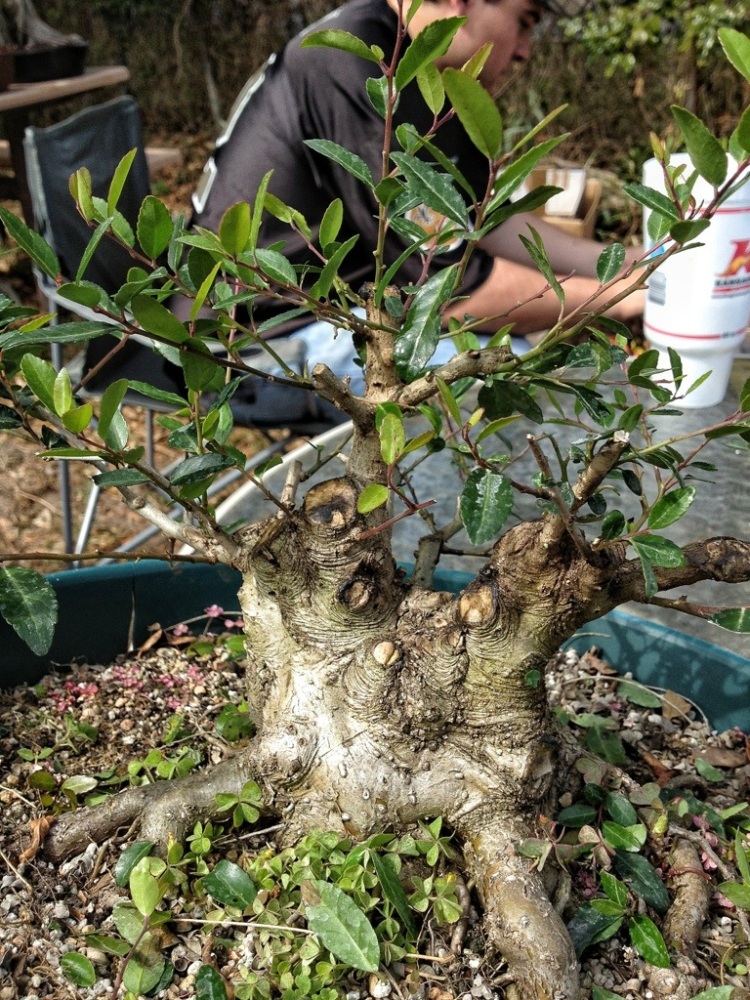 I can wire some branches but most (the red ones) are just too “green” (I know, the red ones are the green ones. I don’t make up the terms.) and wire will just crush them. I can get a few though.
And I must address the soil.

The mix it’s in is heavy on perlite. Which is good for drainage but is ugly as sin (I don’t know how some people like to use pumice. It’s as ugly as perlite) 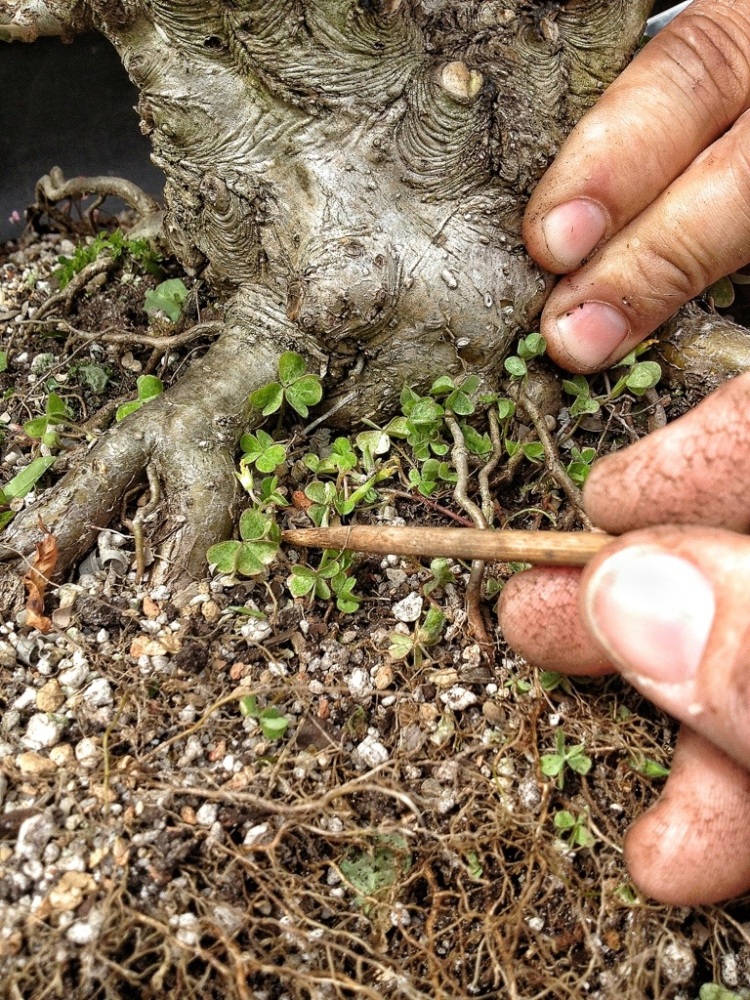 And this oxalis must be eradicated. It’s worse than artillery fern.
This tree was collected out of the landscape and it still has the dirt it was growing in stuck inside the roots.

This must be washed out as it also contributes to the fungus problem. An ilex is a drought tolerant plant and must have very well draining (read that as coarse) soil if it’s in a bonsai pot. It is one of those plants that give off an oil (like pine and juniper) from the fallen foliage that combines with soil particles and makes them aqua phobic. Which means that water and the oily soil particles don’t mix. This increases the oxygen in the root area (scientist think this, at least)

That’s better.
I also recut the big roots to better facilitate putting the tree into the bonsai pot.

I think I got the placement right. Maybe I should have reread the previous post.

I can always change it next year.
You can see the branches I wired. I’ll have to wait a month or so for the rest.
Am I done yet?
No. One more I think…
The story of the wiring,carving and weeding of this one is here. And the stories of two other trees as well. Triple prizes! 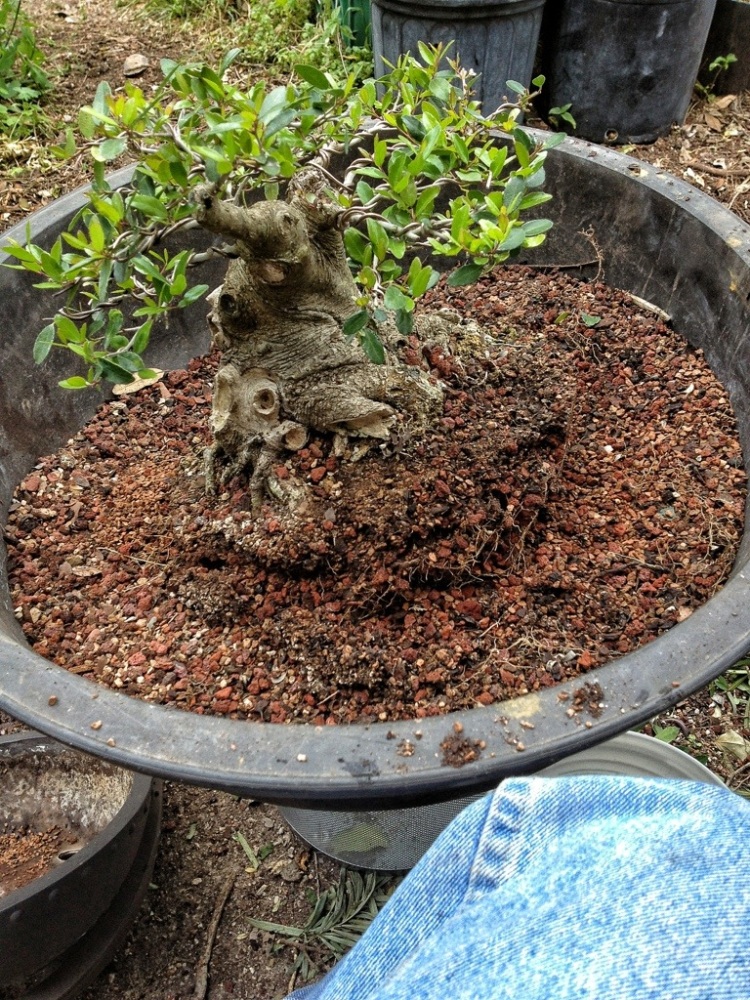 Plunk it into the new pot 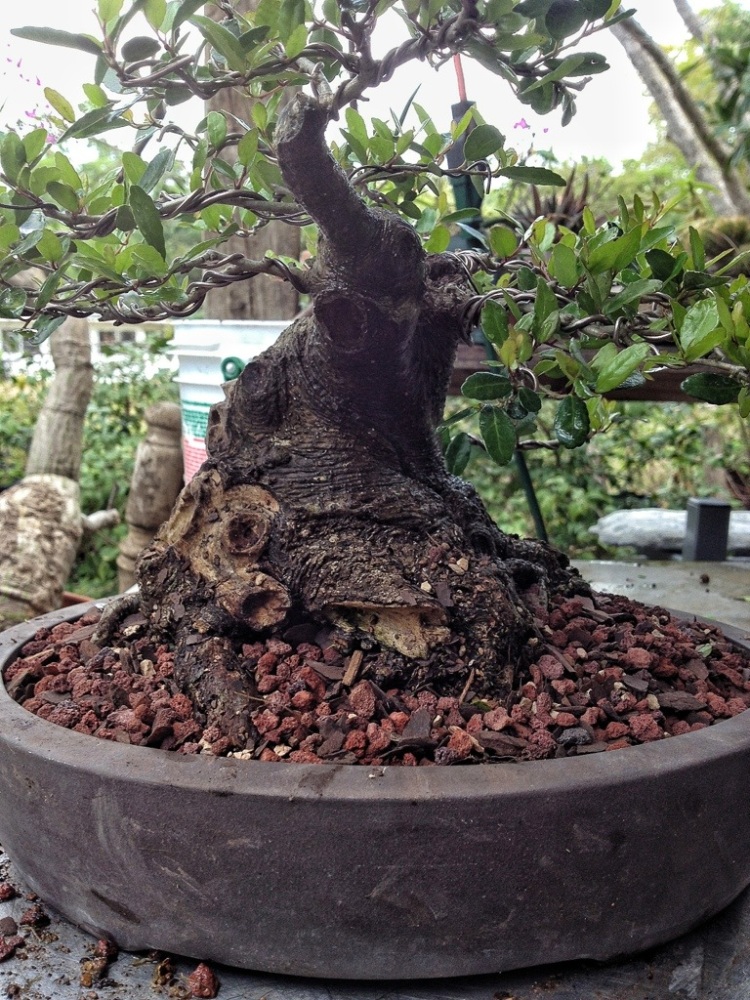 Well, not really plunk. We must have respect for the trees. Place gently and reverently into its new home. Uh huh.
The leaves have filled in well since the trimming and wiring. I may try to enter it in a show.
Still kinda young branching but I have a few months. 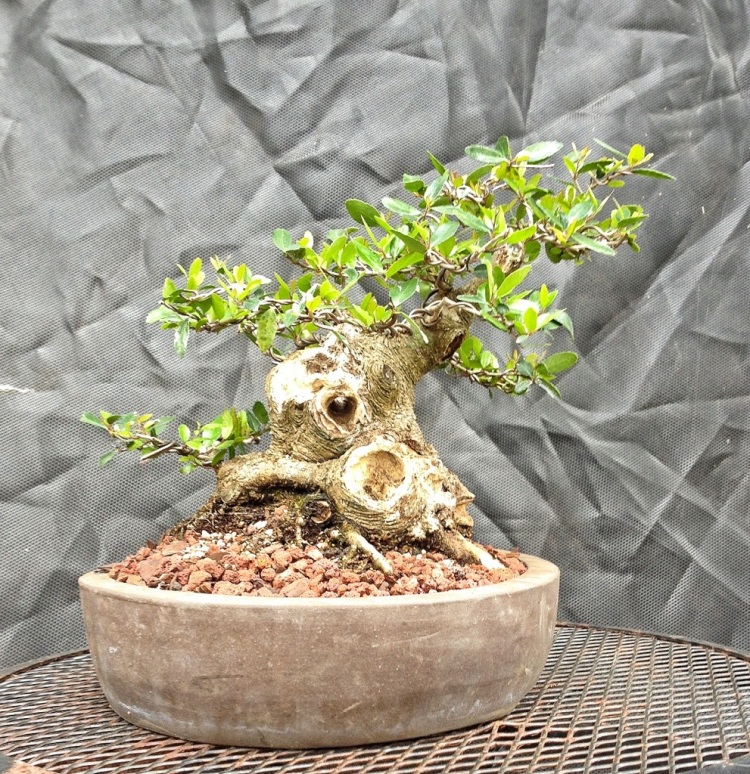 Eagle’s-eye view.
As you might have guessed, I have a fondness for ilex vomitoria. Schillings dwarf in particular.
Most people think they are only good for one style- oak tree- but as you see, all four of these are different.

Wait until you see the cascade, flattop and bunjin I’m working on.