It’s been a long year since you’ve seen this trident (and I know I promised to work on the tree in August but I didn’t get to it, my apologies dear readers) but I’m finally returning to it.
Acer buergerianum, trident maple, a tree that many people covet.
When they’re well done, they are awe inspiring.
When not, well, that’s brings us to our subject today:
Here was how we left the tree last year.

As I have said already, I should just cut it here- 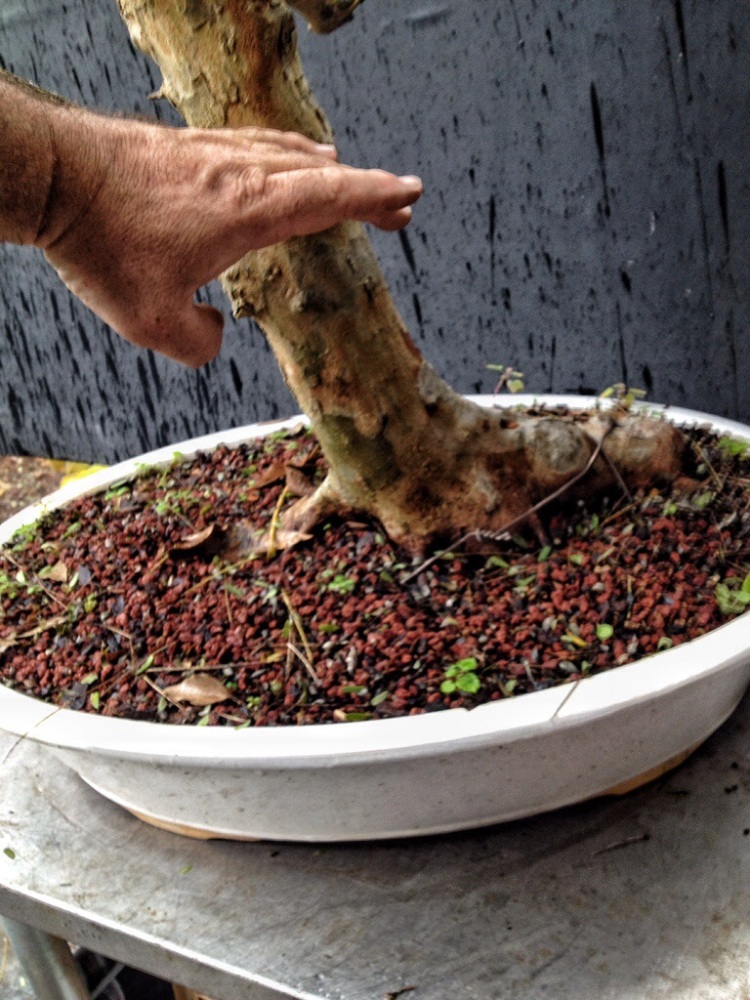 But then I’ll have a tree much like many, many tridents out there already. And I’m not really interested, too much, in duplicating other bonsai and adding to the ubiquitousness of the cookie cutter mentality of many peoples approach to this “art”.
If art it is, which is another post I still have ruminating inside my little brain.
This sketch is my vision for the tree: 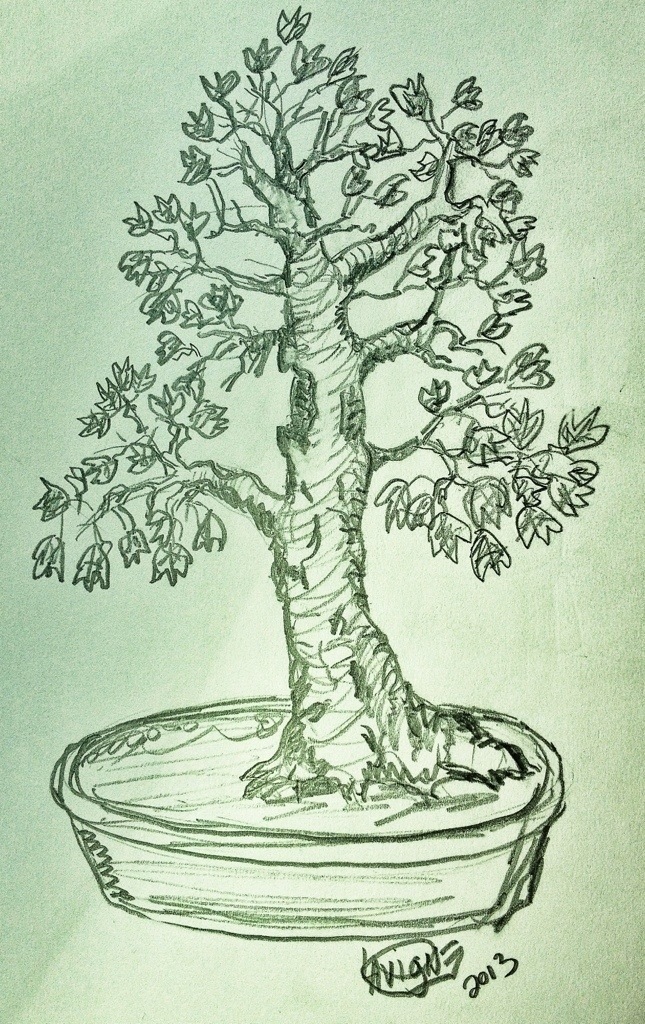 I have a long way to go.
The original post is here (Big Ol’ Trident Maple Project) if you wish to refresh the memory.
To tell the truth, I did no work on this tree all year.
I can give the excuse that I was letting the tree recover from the severe root pruning I gave it (which is valid) or that I was studying it (which I did every day. The tree literally sits to the left of my work bench.).
But those are excuses.
I just couldn’t see what needed doing.
I did need to carve it (that’ll happen in this post) but the branches just didn’t seem to be where I wanted them to be.
Suddenly, though, after looking through my old pics, I came upon the sketch (the one up there ^) and I had that “aha!” moment.
What does that mean for this tree?
This: 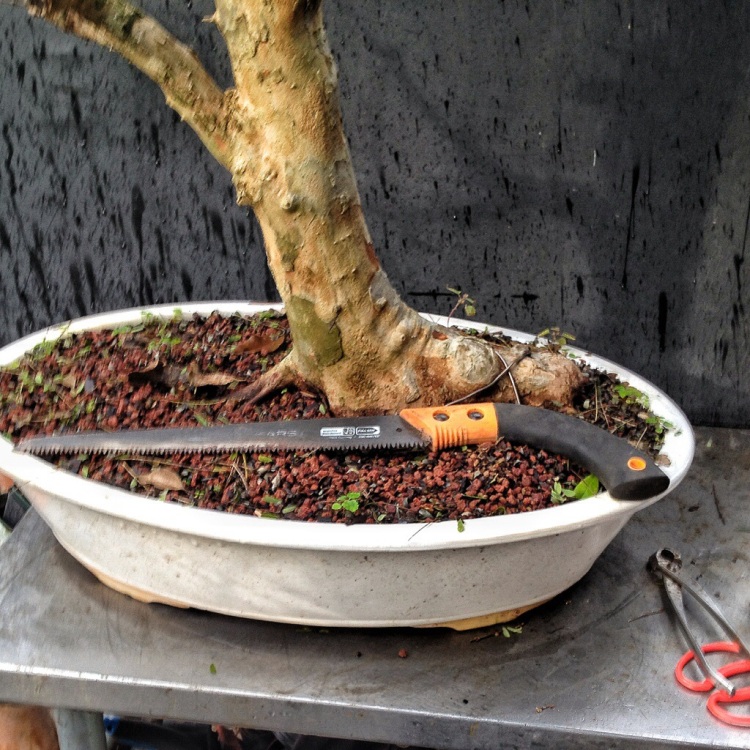 This needs to go: 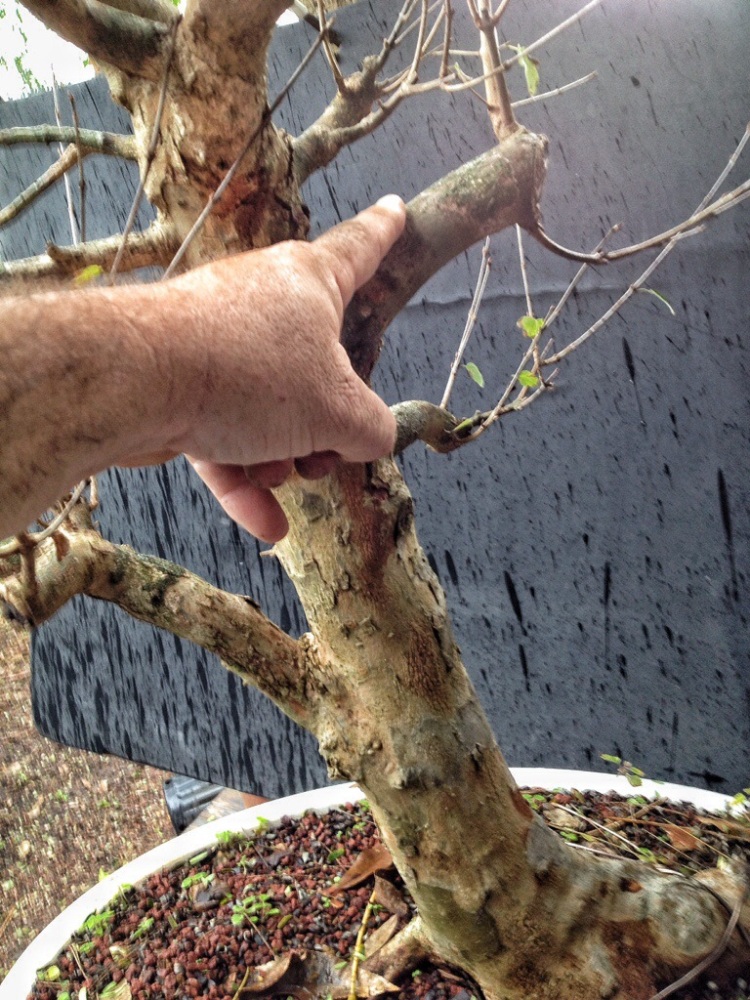 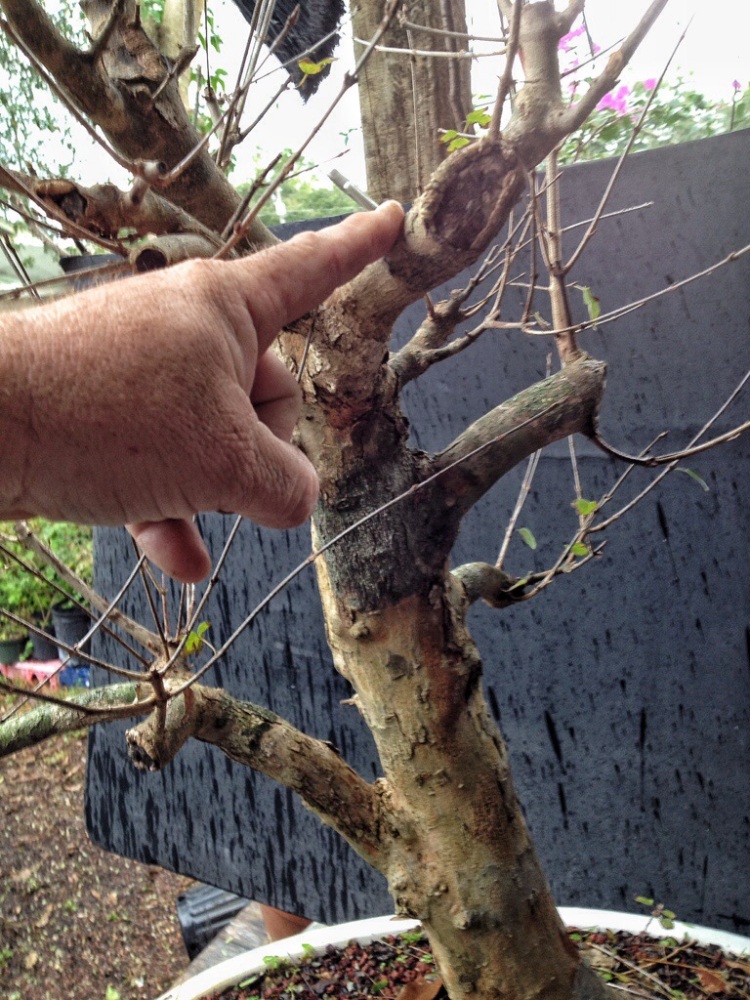 This branch will be shortened:

Let’s get to cutting…’nuff talkin’ 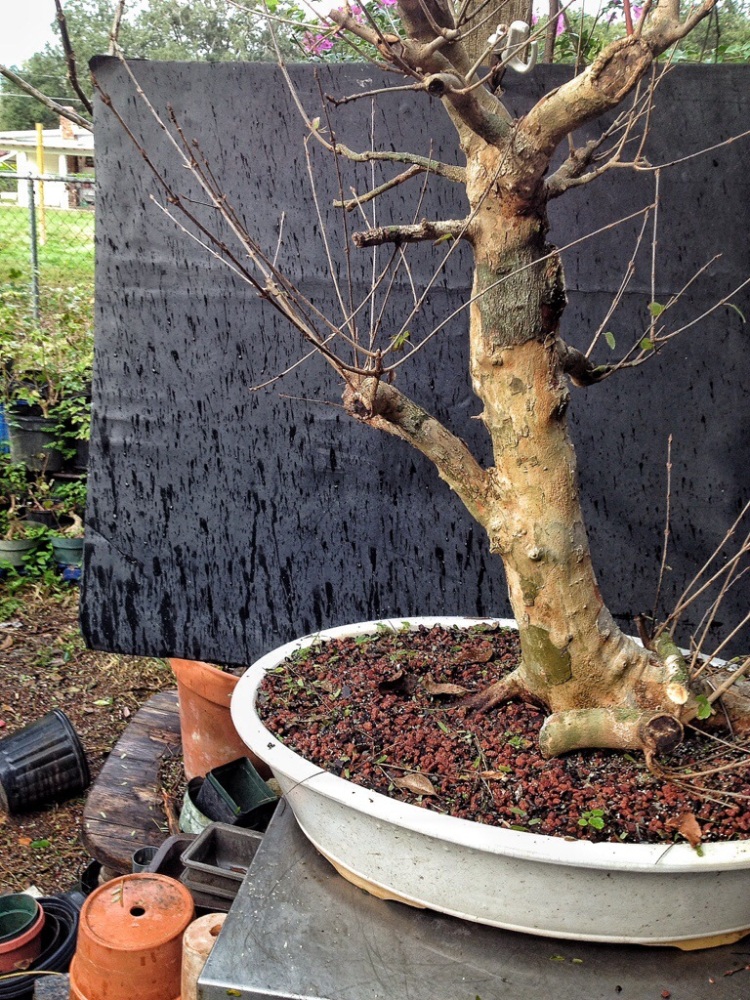 What you’re seeing is me cutting off those heavy branches I had left at the end of the previous post.
But, you ask, what about that one in the back?

I think I still need it.
But I’ll help its look a little (that’s what I’m here for).
It had a bud on top, which wasn’t working.
Fortunately, there are two on each side.

Which I will eventually cut back to.
For the time being, I’ll just give it some taper. 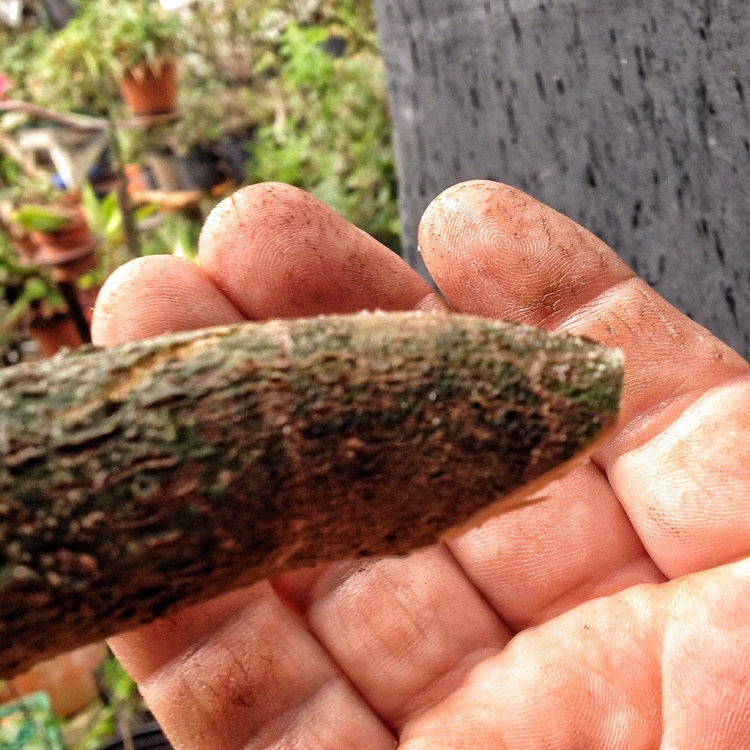 Now I’ll thin out the branches and do some clip and grow style pruning.
This branch-

is at the wrong angle.
It goes away:

As is the case with tridents, there is a bud that’s right at the junction of the branch I just removed-

It will be the new leader.
And I use these fortunately placed buds to guide the pruning as I go: 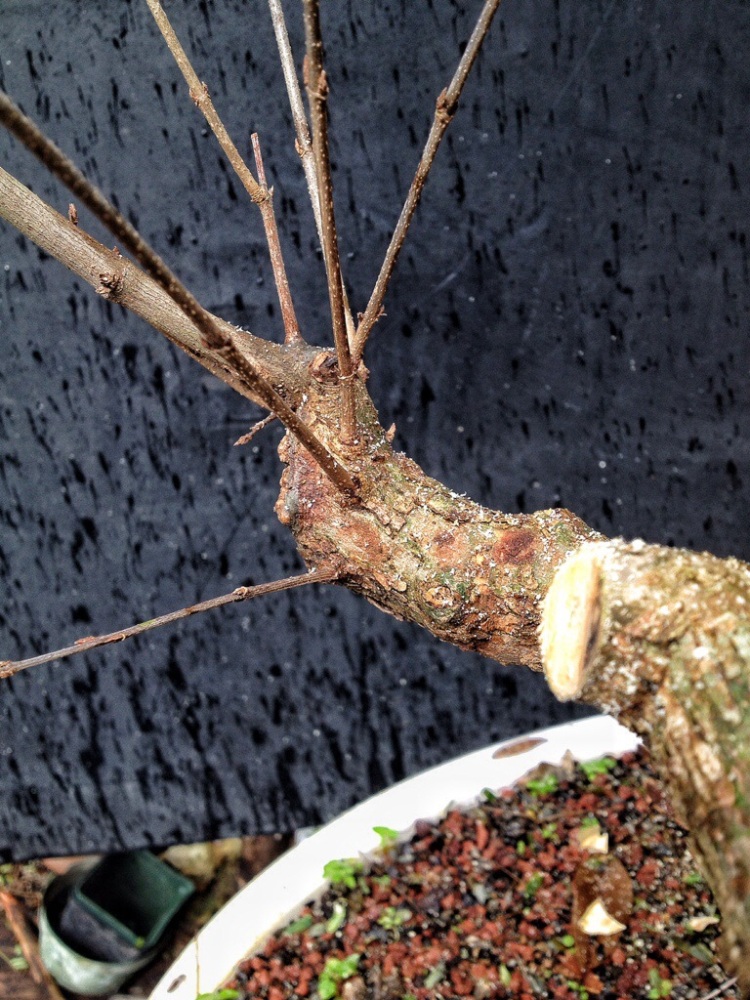 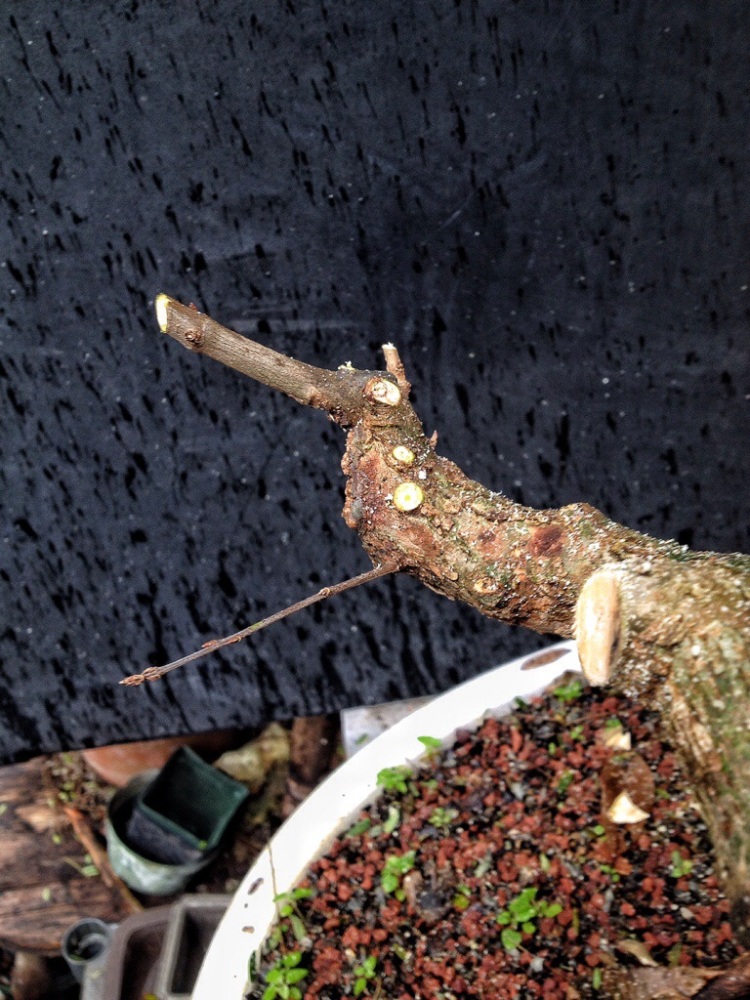 So on and so forth.
Next, it’s time to carve.
This is a somewhat controversial artistic feature I’m using on this tree.
Traditionalists will argue that a deadwood feature has no place on a deciduous tree.
I tend to not enjoy engaging in debate.
So I won’t.
I’m not using Jin on this trident (not saying I wouldn’t on another. I may, but not on this one).
I’m creating what the Japanese call a “uro”.
Basically it’s a hole.
These two areas are the places I’ll subject to my tender ministrations.

Using my trusty die grinder with a rotosaw-

I will say this, if the grinder looks as blurry as that photo when you’re looking at it, you either need your glasses or you’ve emptied too many beer glasses.
That’s my safety tip of the day.
Fortunately for me, I don’t need glasses and, unfortunately, I haven’t had a lick of intoxicating adult refreshment at all today (yet….a couple a’ more bad jokes and I’ll need one) I just took a blurry picture.
At least it looks blurry to me.
The trick of the day:
When carving, cover the soil!
You haven’t spent all that time sifting your soil or all that money buying your soil just to clog it with sawdust.
I recommend using a totally useless rag you might have lying around.
This’ll do:

You will thank me later.
The stub before:

The stub above was from the cut I did last year.
Below is the cut I just did:

And after the carving:

The tree will try to heal over that wound, a trident is kind of known for that. The wood on the inside will probably rot deeper too.
And that’s all ok, it’s the look I’m going for.
I want the viewer to see the hole, a mysterious, dark hole with undulating folds and crevices, that makes you want to poke your finger inside to feel what’s inside, but afraid to because it’s scary and unknown.
The suspense is terrible….I hope it’ll last.
I also carved out the branch ends on some of the big cuts:

Maybe I’ll get the drill bits out…..
One more bit of carving:

This part of the nebari is a little coarse. A slight touch up…

That’s better.
Now we have a slight rain delay before I can get the final image…

Which gives me a moment to talk about turkey bacon.

Here’s my question: Except for the shape of it, it’s not really like bacon at all, so why bother calling it bacon?
I mean, really?
It has some texture similarities to all-you-can-eat buffet line bacon but I don’t even consider that stuff real bacon either.
Here’s an analogy; hot dogs are kind of like knackwurst, but we don’t call them American knackwurst, do we?
Let’s come up with a good name for these savory breakfast strips made from turkey besides turkey bacon.
Can I get a “Holla!” ?
Enough semantics, it seems that it has miraculously stopped raining just as I finished my rant.
The side: 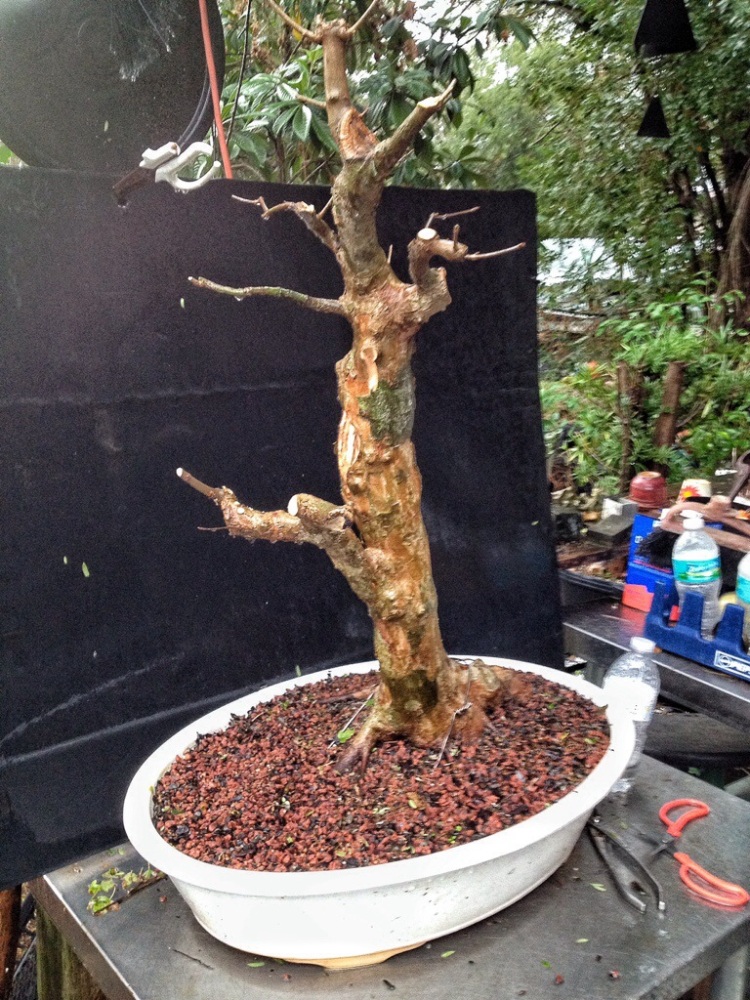 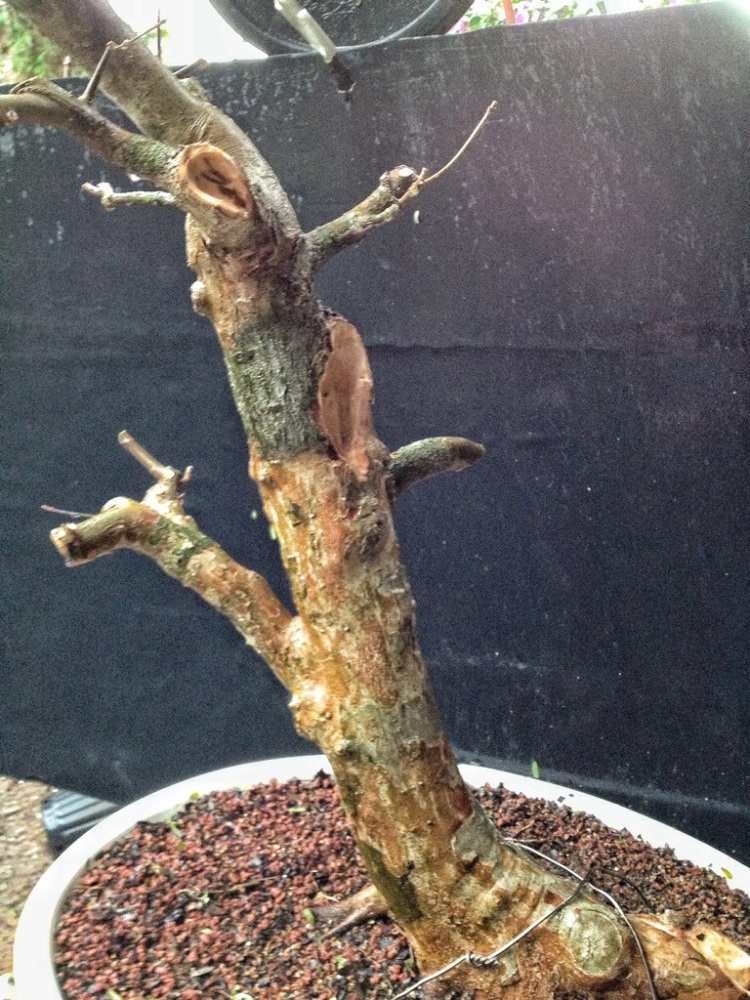 And the end product:

Maybe I need another sketch?
Tridents are not very fast trees.
Definitely not like a ficus. But I should have something to work with by June.
I will be diligent with this trees development in the coming year because, truthfully, I feel better about it now than when I last left it.
Slow and steady.