I’ve lost count of the number of days I’ve been on my tour.
But if it’s Wednesday, it has to be Dayton.
I left the Kittle homestead midday (the next post, Darlene, I promise, will be on that magnificent eight foot tall ficus named Bigfoot) and arrived at my host home for the night, Judy’s house. 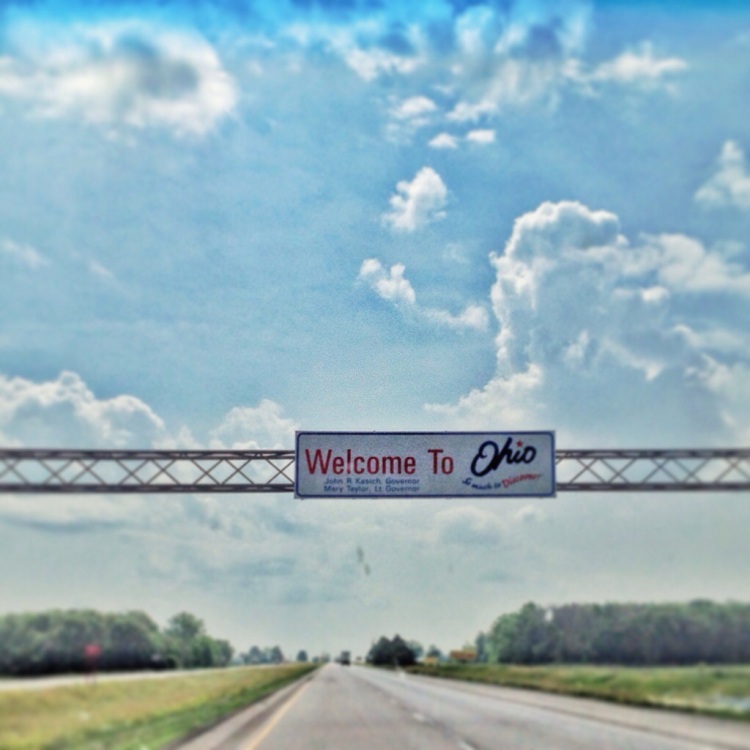 Dayton from the on ramp. 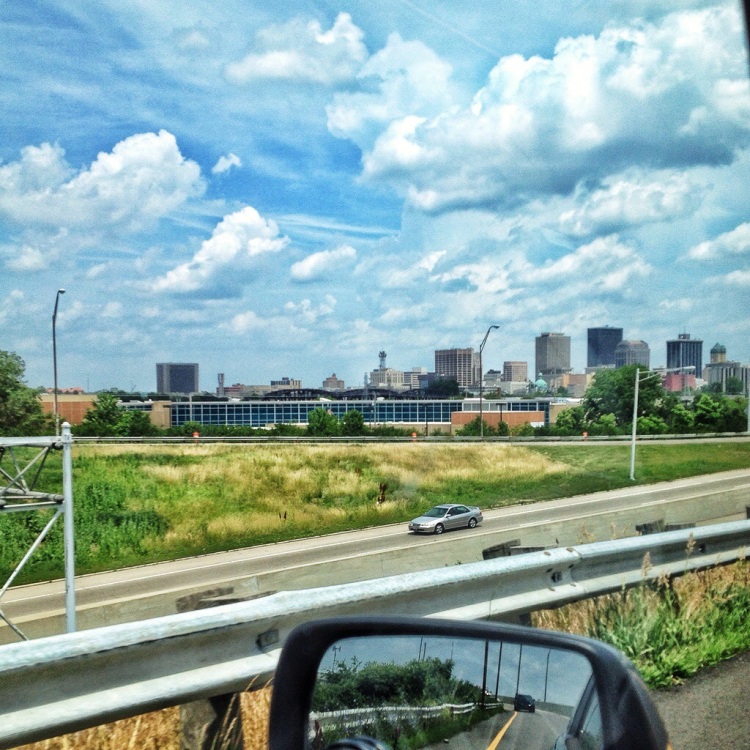 Judy has an amazing collection of conifers and Japanese maples; of which she knows all the names and cultivars and I couldn’t begin to remember them.
I’ll just post some pics, how’s that? 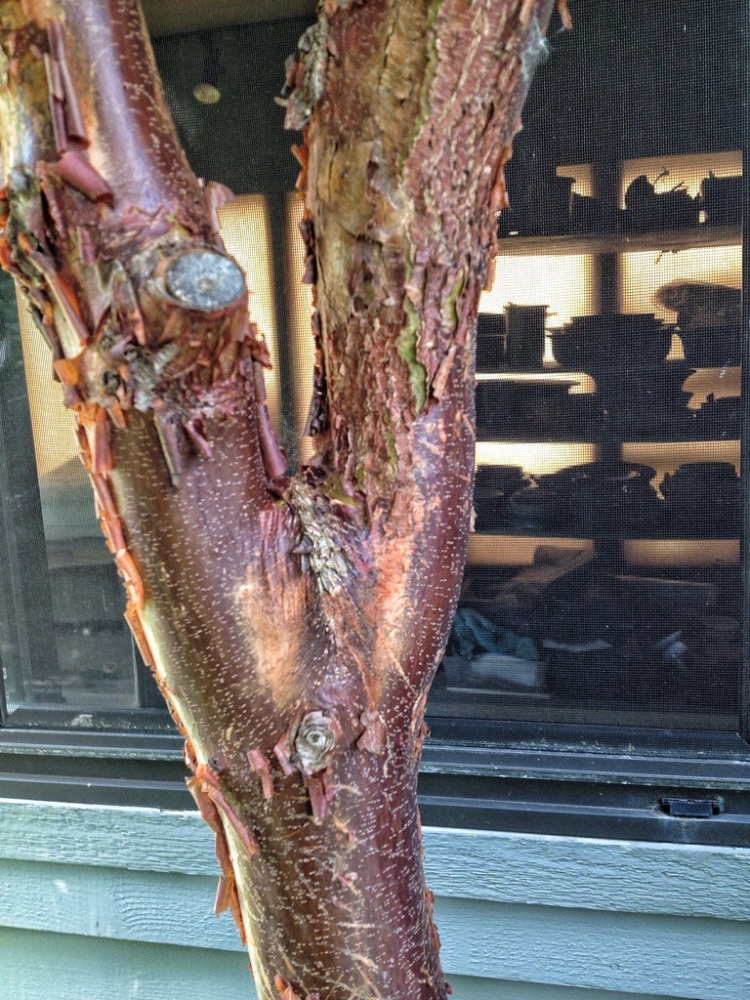 Beautiful garden, isn’t it?
She also grows orchids and even has one named after her. 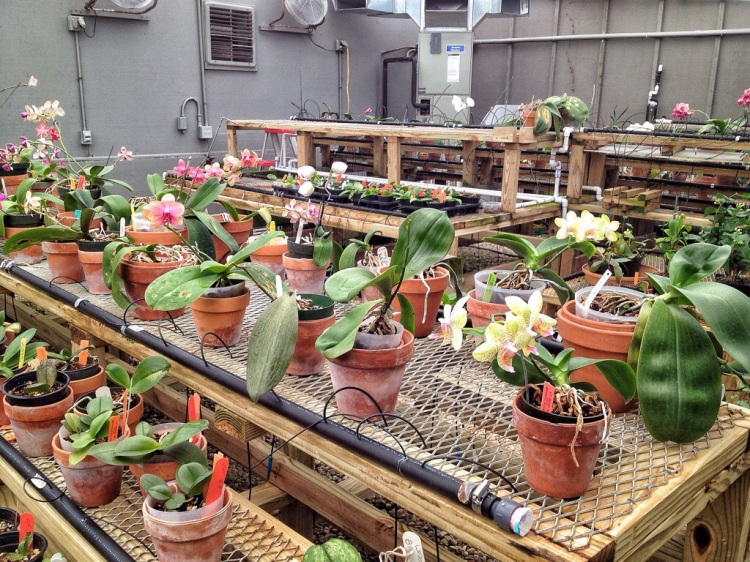 After a whirlwind tour (she had some spectacular bonsai too) we sat down and had a short rest before the Dayton Bonsai Club meeting.

Ahhhh, a little Newcastle to refresh the soul, eh mate?
All good things must end and it’s time to work.
After a short ride to the agricultural extension office (the meeting place for the club) and after the briefest business meeting I’ve ever had to endure (the bane of the visiting artist, this one was over before I had even dozed off. I could’ve really used a nap) it’s finally time to perform.
Up until now I had been doing workshops and when I’m teaching one on one I’m very quiet and intimate.
It is in the demonstration, to some people’s horror or delight, where I really go crazy and shine on like a crazy diamond.
Imagine this blog, live and uncensored, but with a live audience to encourage and cheer me on. 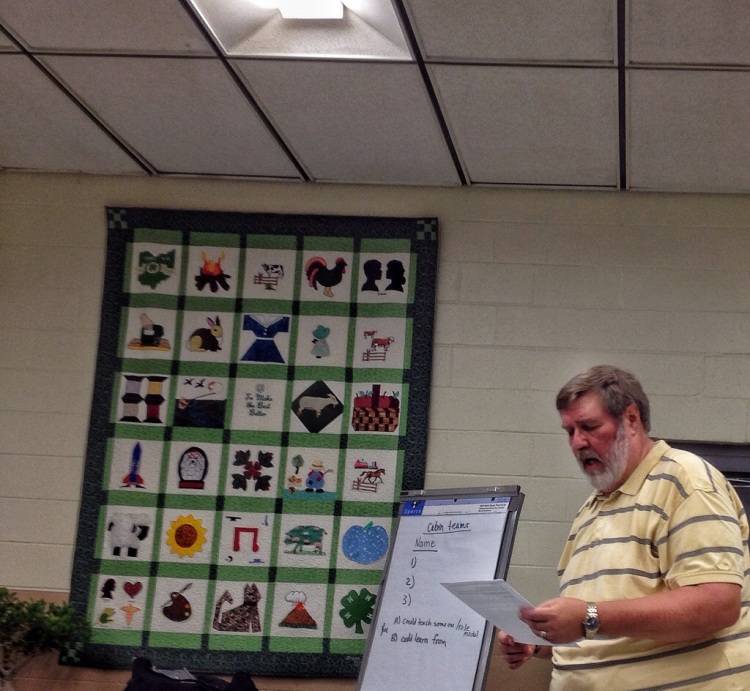 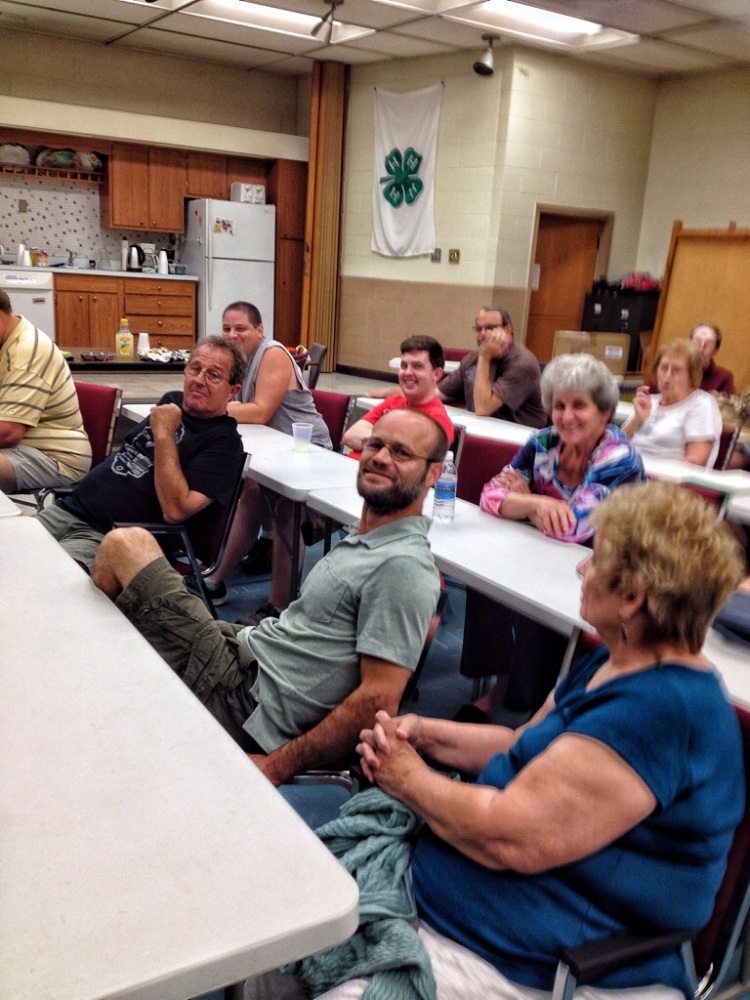 The Dayton club is a nice group, they made me feel at home with their informal meeting style.
Someone was even thoughtful enough to make me feel at home by baking some familiar shaped cookies for me.

The tree I’m working on is an ilex vomitoria schillings.
It’s a dwarf variety of a full size tree; some would call it a bush even.
Here’s a blurry pic of the bush I’m going to trim. I remember a time when all amateur bush photos were blurry. 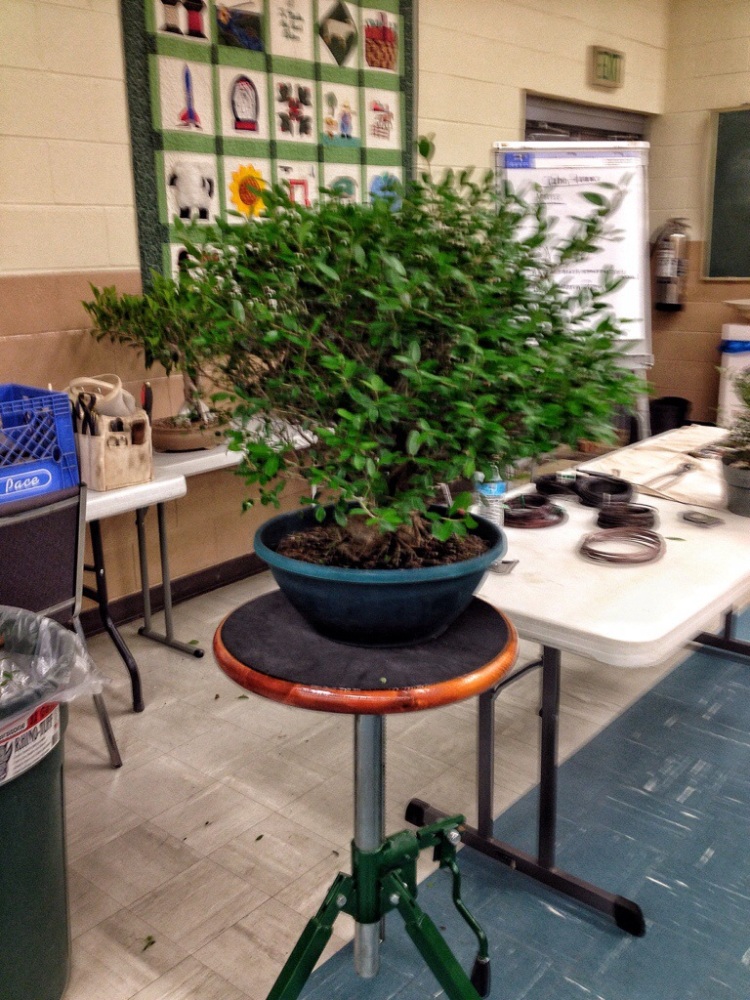 I talk about the species and give the background for the Latin name (vomitoria), the ilex is one of my favorite trees and I have written about it more than any other species.
And I have a lot to say about it too.

Working on a bush like this it’s just a matter of whittling down the branches enough to turn it into a tree.

And, coincidentally, the last bad joke coincides with the end of the styling of the tree.
Almost like I planned it or something.
I say goodbye and promise to write and all that.
One more night at Judy’s home where I can contemplate her husband’s underwater seascapes. 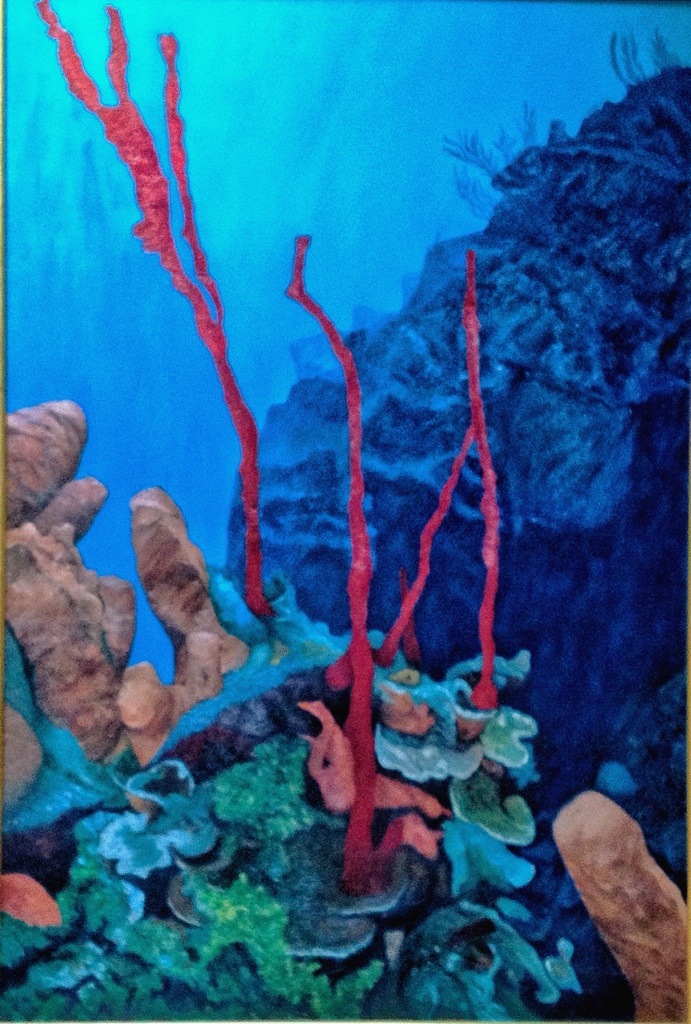 Then it’s up early and some breakfast.

She let me cook my own omelette.
A last look at her landscape and pond. 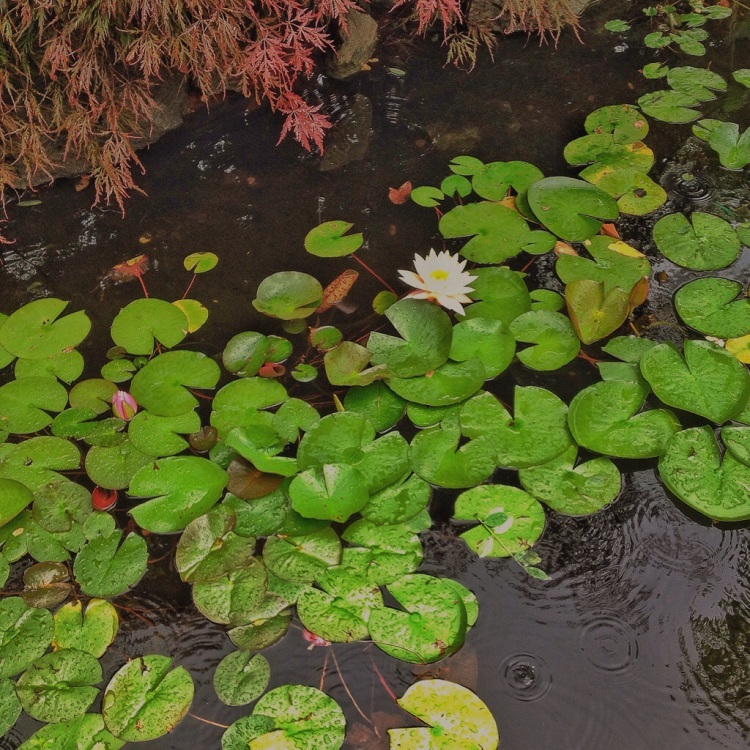 And then it was off to Cincinnati and Evan’s house.
And what was awaiting me there?
Probably the rarest thing I’ll ever get a picture of, in fact, there’s never been photographic evidence of this rarest of occurrences.
Me doing laundry.

I got the clothes and soap in ok but then these controls baffled me.

I could disassemble (or even dissemble) and repair this washing machine but it took me a good five minutes to realize that the lid has to be down for the wash cycle to start.
I guess it’s some kind of safety thing or something.
I contemplated sticking my pocket knife into the contact point just so I could watch the machine work, and just to thumb my nose at the safety nazis, but I had other things to do, like a demo at the Cincy club. 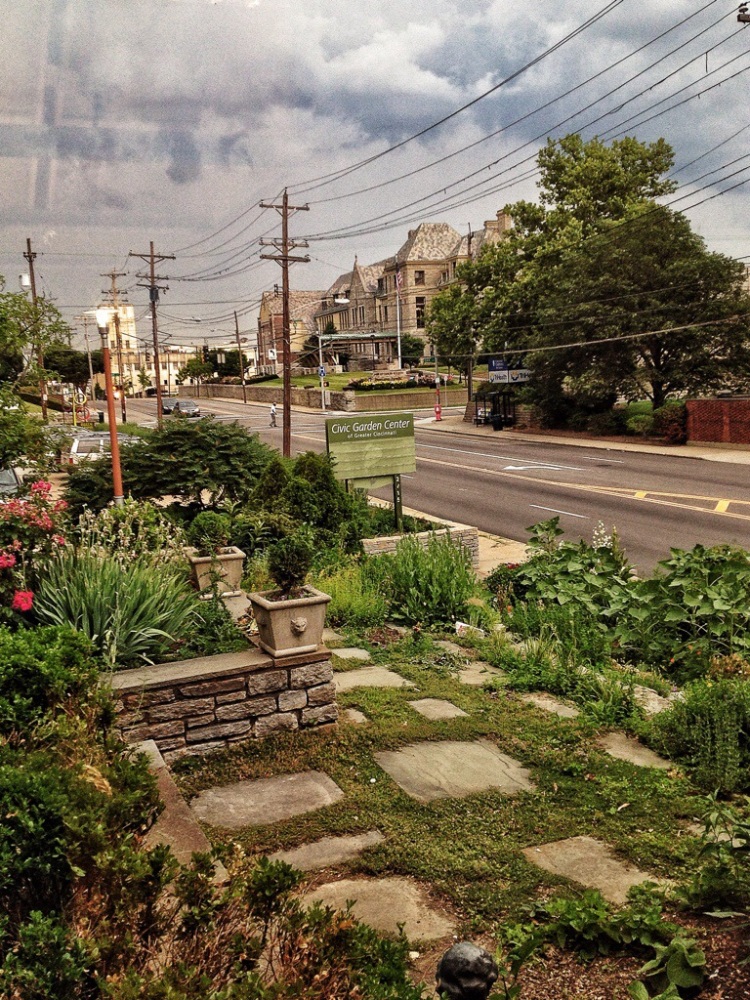 They meet at the Cincinnati Garden Center.
My victim for the night was a bald cypress.
By now I’m sure you’re wondering about the suitability of growing both an ilex and a bald cypress (trees native to Florida) up in the frozen north.
You’d be right about the ilex; it’s only hardy to zone 7, so it will need winter protection, but it’s not a tender tropical either.
The bald cypress, on the other hand, can take the cold.
I saw a thirty year old one in Ft Wayne Indiana that had cones on it (which I’ve read can’t happen up north).
They use them for the same purpose we do down here, they plant them in the medians and in retention ponds and on the sides of highways.
I had to do a double take on my way from Indy to Ohio, I swear that a highway rest stop looked just like a Florida one with a whole stand of cypress in front of it.
The one thing that’s different about the cypresses growing habit though, they weren’t turning into flattops.
Here’s the tree before the work.

I’ve reduced the roots and it’s in bonsai soil, so whoever gets it won’t have too much to worry about transitioning it into a bonsai pot.
Before any work can occur though……the dreaded business meeting.
La la la la la!

Maybe if there were dancing girls in the back? That would definitely make the business part go more quickly.
Or if they dispensed beer.
Yeah….beer.
Some people might have thought perhaps I had been indulging before the demo.
There is actually a video that was shot of this performance and as soon as I get ahold of it I’ll find a way to post it.

As I was saying earlier, the tree I was styling is a bald cypress. 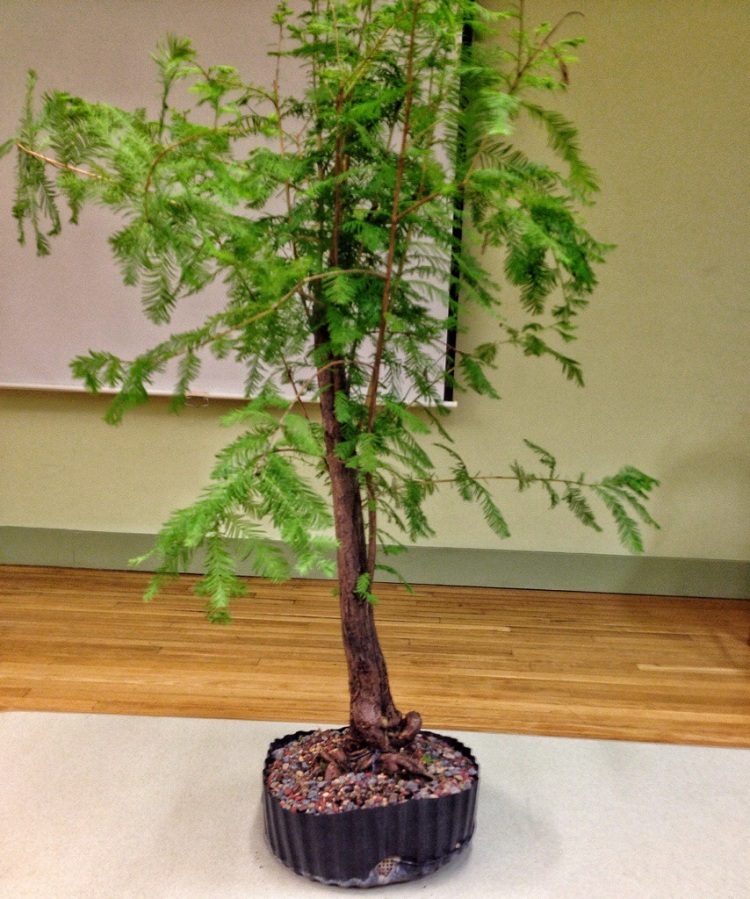 And, as we all know, cypress grow in swamps, and in swamps there be alligators and alligators make good shoes (or good shoes are made of alligators) so I jump up on the table, don my official cypress tree demonstration shoes….

Yes, my friends, there is video evidence of all this.
There was also a betting pool to see when I would actually start styling the tree.
I did eventually cut and wire it.

And I even drew a sketch.

I styled it in a naturalistic Louisiana flattop form.

And this is the sketch. 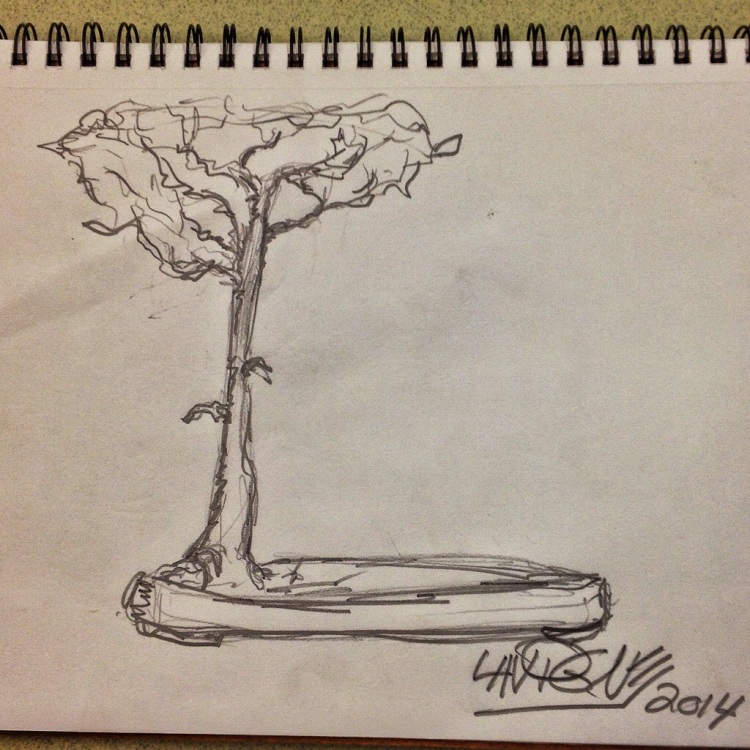 I worked on two Florida trees but I used two different approaches.
The ilex, a stylized, super-forced perspective (or a close up view) sumo tree: 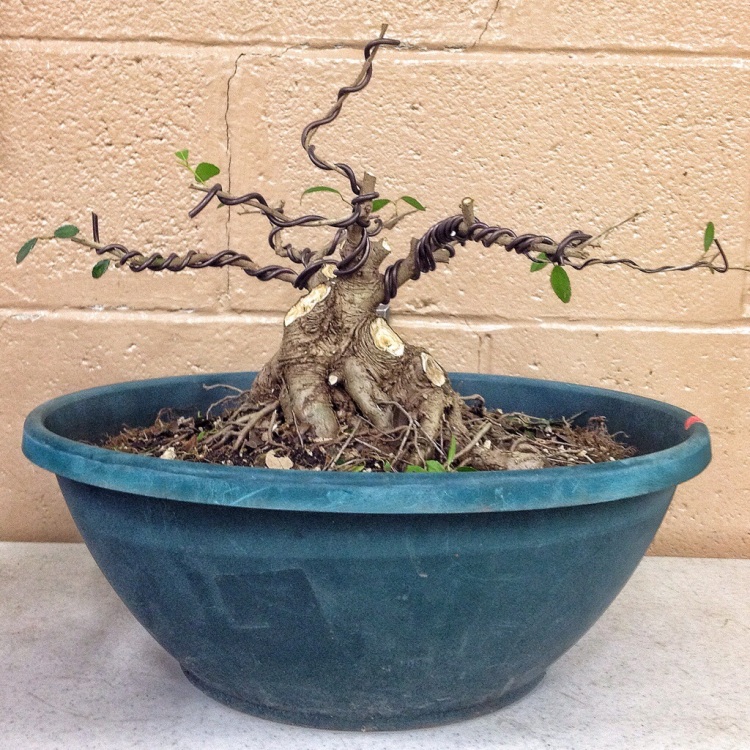 And the cypress, a naturalistic, far-view, flattop swamp tree. 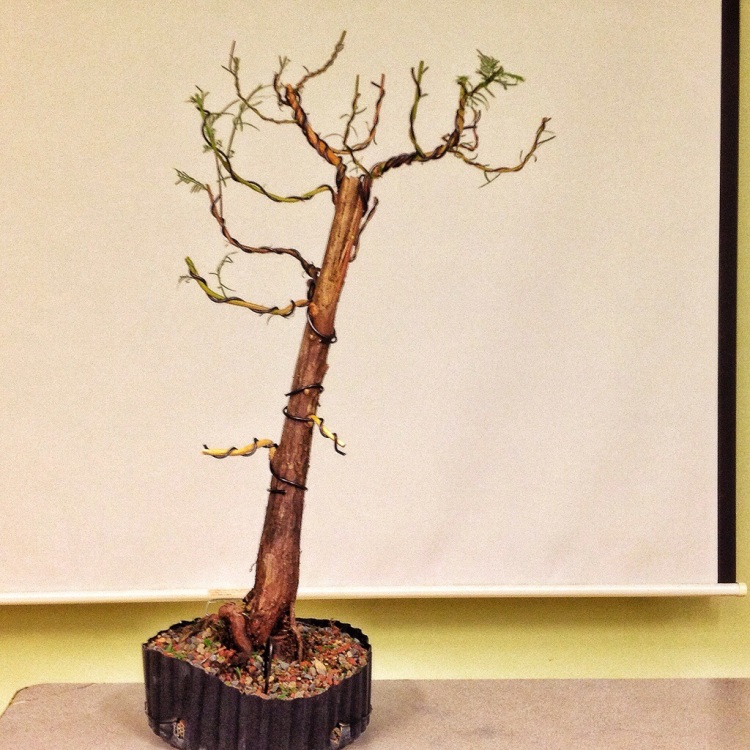 Pheweee!
What a couple of days!
The next post will be on day three and Big Foot.