Here it is, the post you’ve been waiting your whole life for, how to make little trees into big trees!

Let me introduce the players:

The trees are acer buergerianum (trident maple). There are two different growing methods that have been employed here: one was to let them grow slow, so the nodes (the places where leaves and branches emerge from) were close together. The other method, which I’ve shown several times now, is the cd root improvement technique.

What I’m about to do now is something I read in an old bonsai magazine years ago (I can’t find the article, all those mags are print only, I can’t imagine all the knowledge that is stuffed in a box in some closet in Peoria…. which is a shame. Not only is all that info hidden away, it makes people think that the the latest hotshot bonsai artist is a genius when he shows his “new” technique he found in an old mag).  The article was either written by Suthin Sukosolvisit or was just chronicling a technique he was using. Since its been so long since I read the article, and I can’t remember the details, I am improvising the technique (and doing a real ham-handed job of it too). But I do know one thing, trident maples will fuse trunks. I would even suggest they fuse and graft better than any other tree, even ficus.

﻿This tree is one with a cd under it. I chose it because the roots didn’t develop on one side. ﻿

﻿This gives me a spot to shove the 2nd and 3rd trees into place.

I remove the roots on the bottom of the cd. ﻿

﻿And now I’m ready for the other trees. ﻿

﻿The smaller trees were also chosen because they had weaker roots on one side. ﻿ 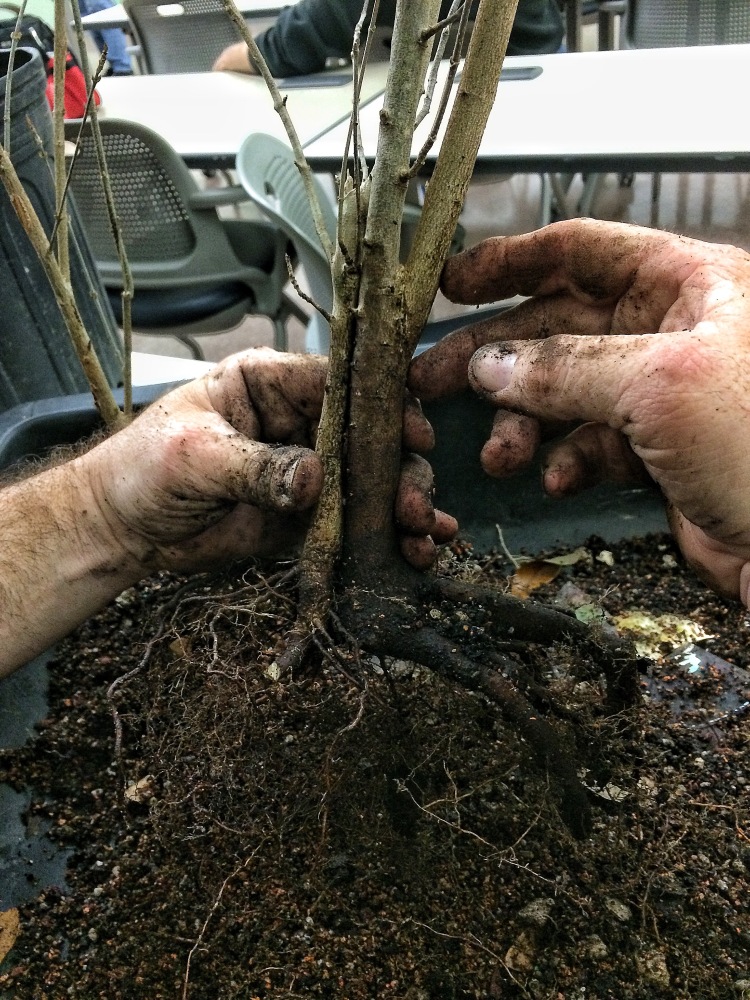 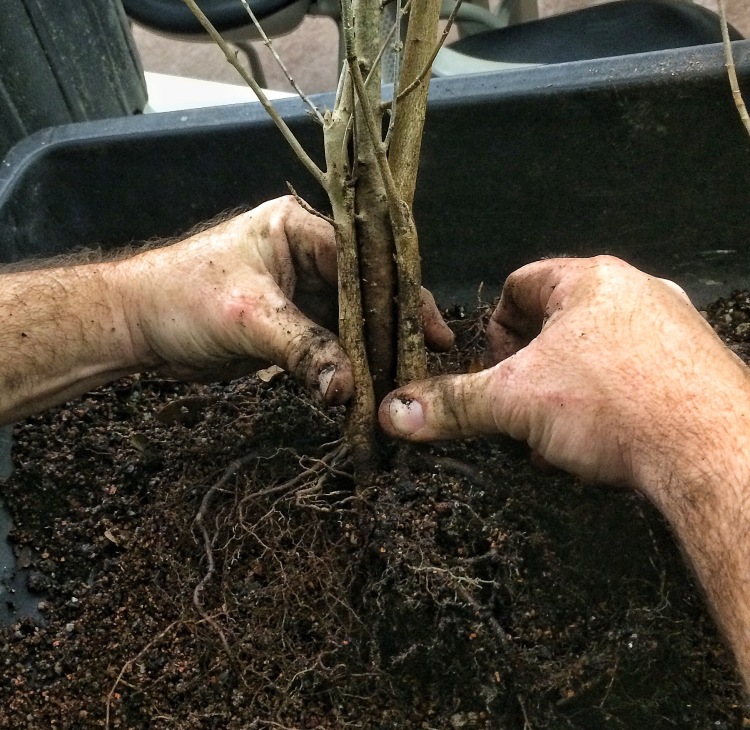 ﻿I also tried to match up the shapes of the trunks. I didn’t do so well with that.  It’s ok, as they grow larger, they’ll meld together. I scored the bark where the trunks are touching so they will grow together quicker. ﻿ 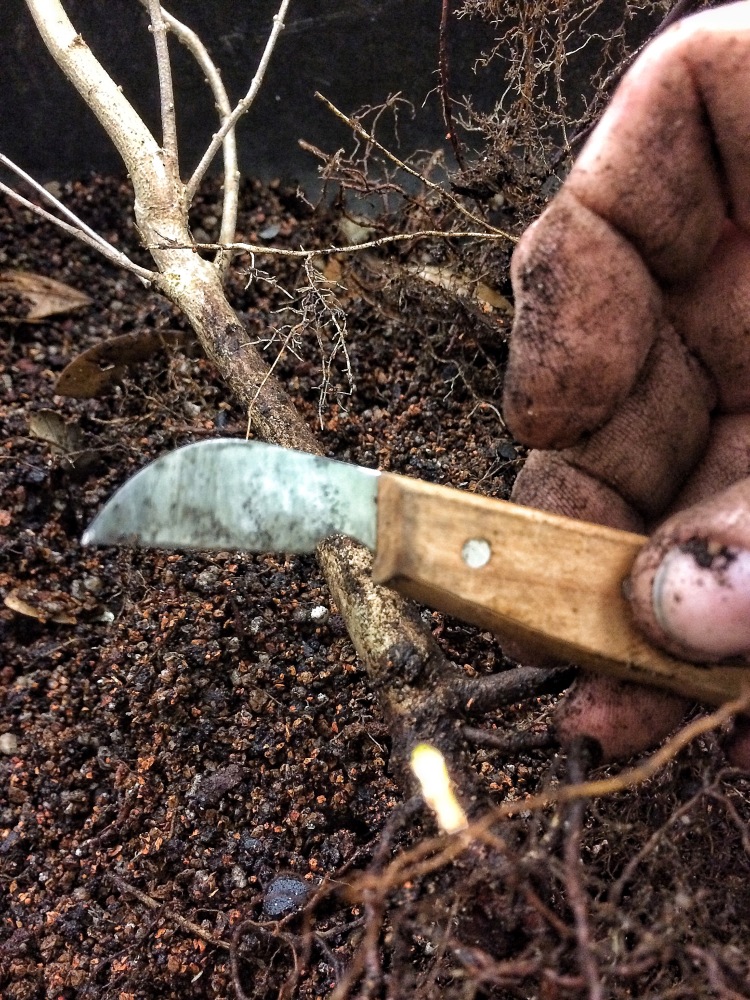 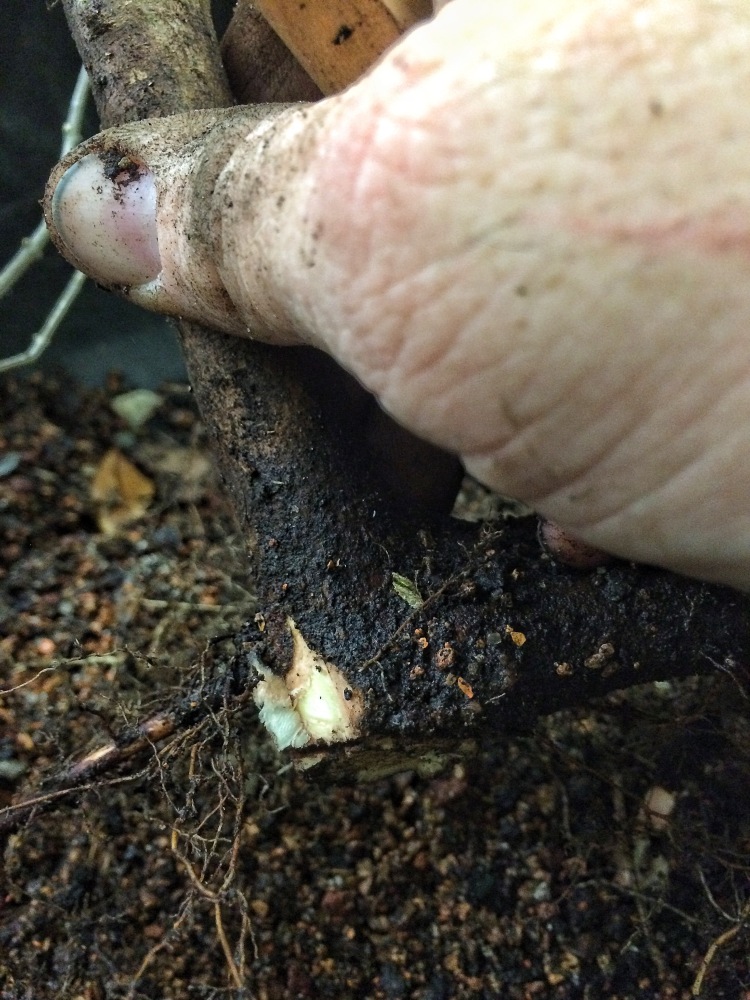 ﻿And the next step is to tape the trees together. There is such a thing as “grafting tape” but, since I’m doing this by the seat of my pants, I don’t have any.

I do, however, have that roll of self-amalgamating tape from the juniper post I did last year (the one with all the crazy trunk bending ﻿where I used it instead of raffia).

Self-amalgamating tape is an electrical tape that only sticks to itself. I think it would be perfect for this. ﻿ 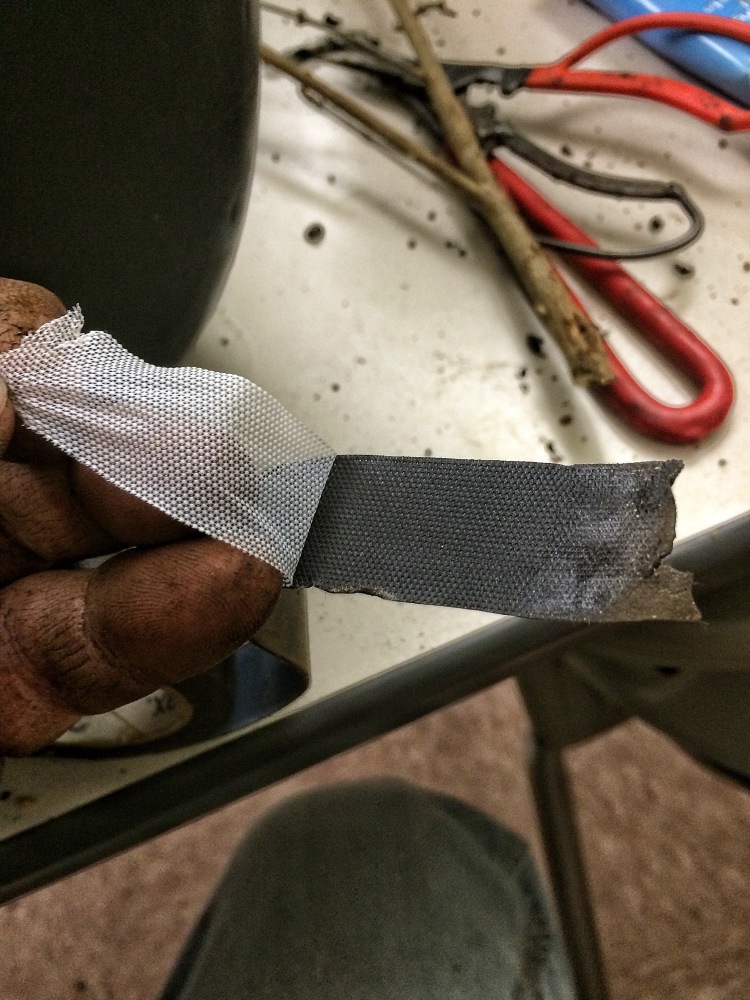 Well, it would be if it still worked. ﻿

﻿I guess there’s an expiry on it. It won’t stick anymore. Dammit.

I do have regular electrical tape, I’ll take any port in a storm, I guess. 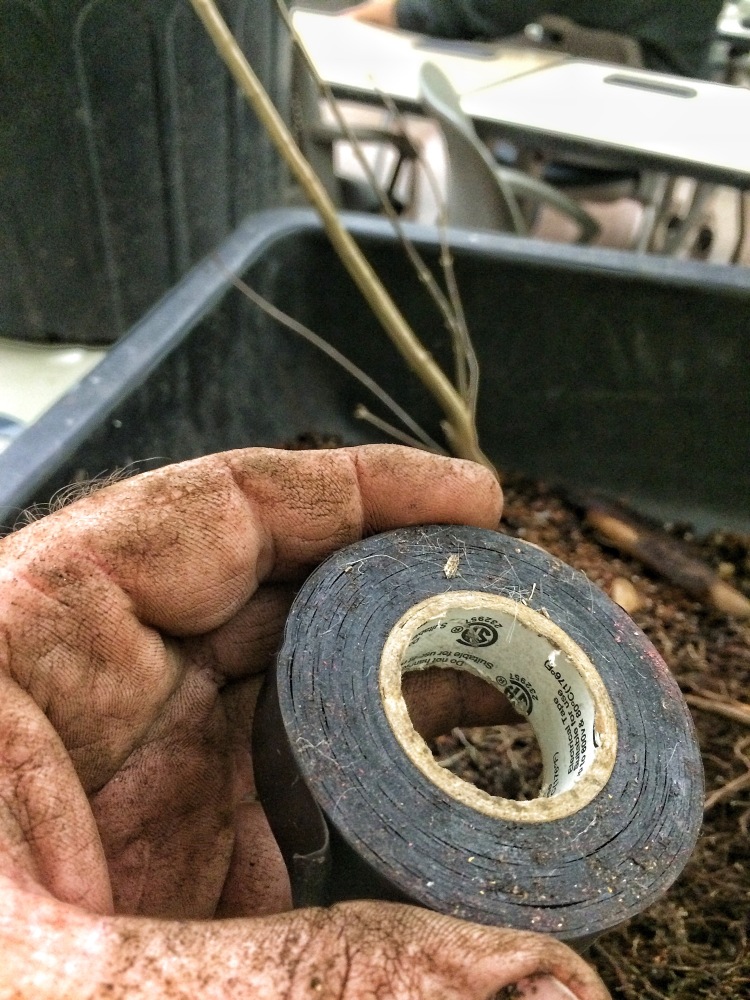 Basically the trees need to be kept in contact until they fuse. Grafting tape is designed to be rigid enough for the job (as is electrical tape, I hope) yet it will give and flex when the trees grow. ﻿

﻿Now, a little cut paste so those cuts don’t dry out. ﻿

Here’s a cool tip: you know how, when you cut down a regular nursery pot…..﻿ 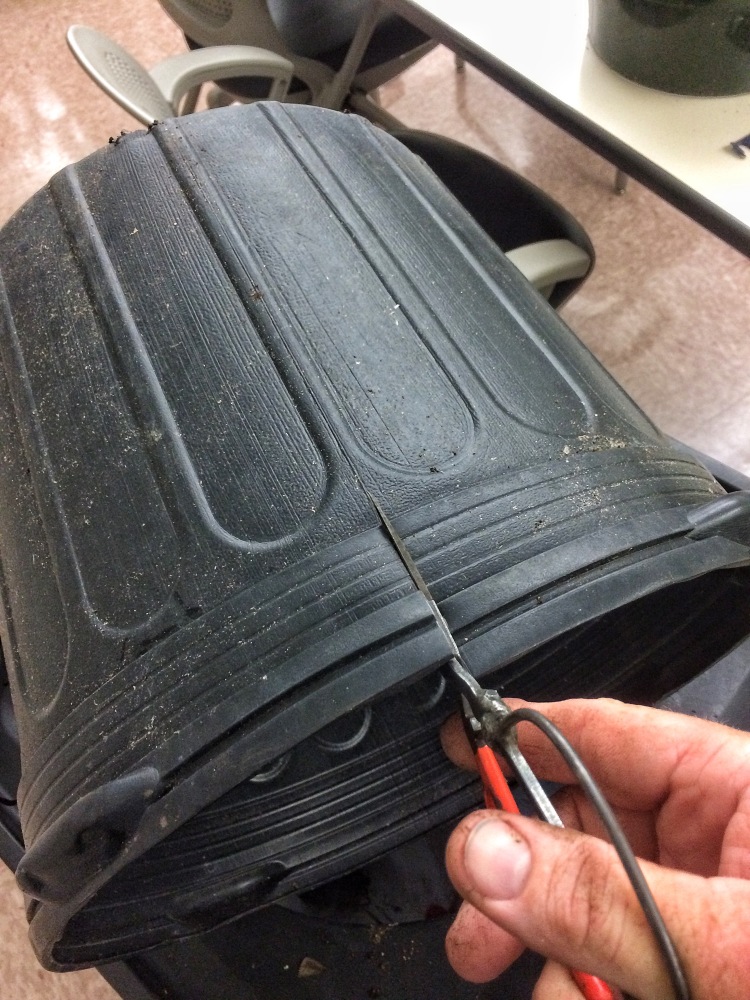 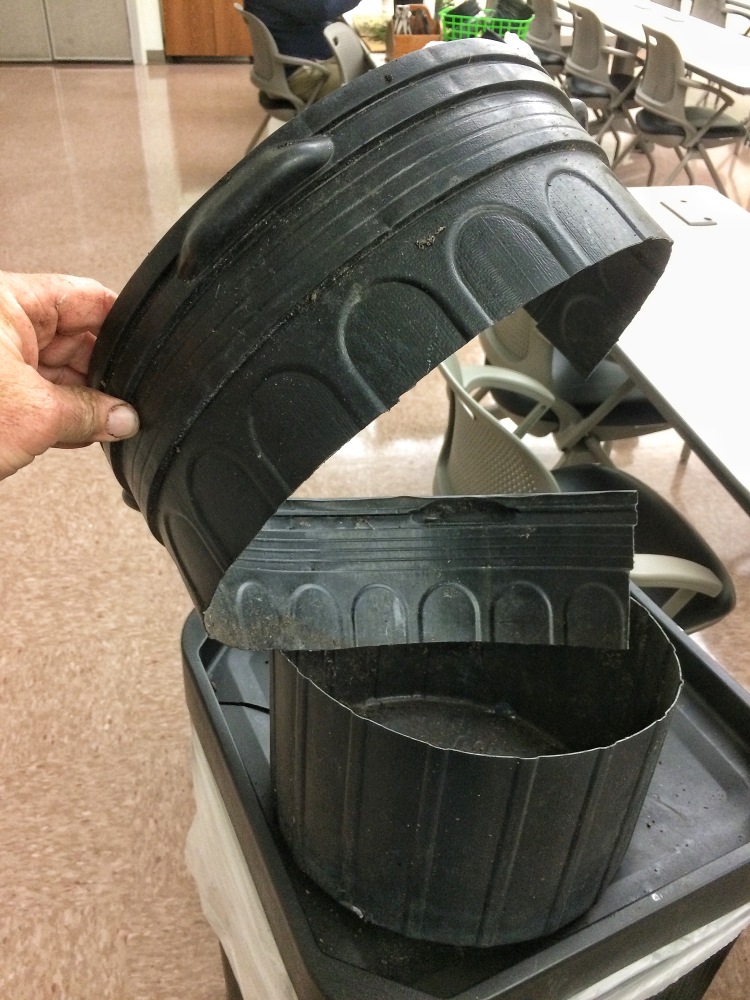 ﻿……you end up with a floppy, hard to pick up pot because the lip (which is structurally important) is now gone? 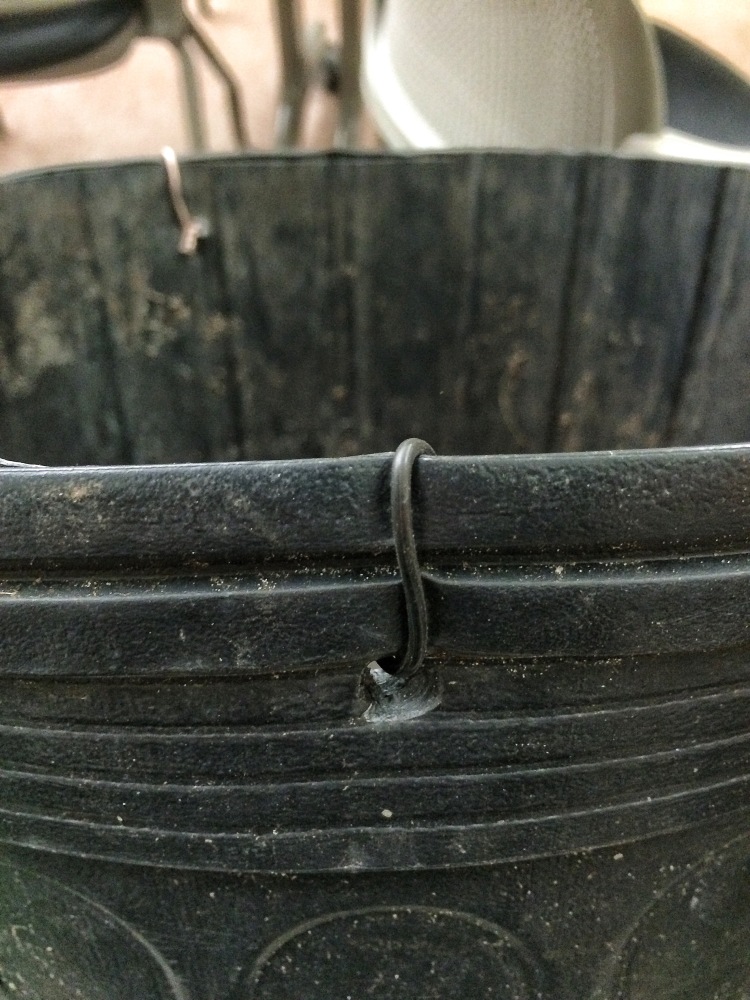 ﻿Take the lip, poke some holes and viola! ﻿

(You know, I’m still waiting for someone to call me out on my use of the word “viola!”)

Nifty, right? As with all good ideas, I stole it (maybe I got it, too, out of an old bonsai mag).

Anyway, I’m using a mix of nursery soil (half perlite, half standard potting soil) and my bonsai mix. And I’m fertilizing heavily; I want the trees to get as tall and to grow as much as it it can. ﻿ 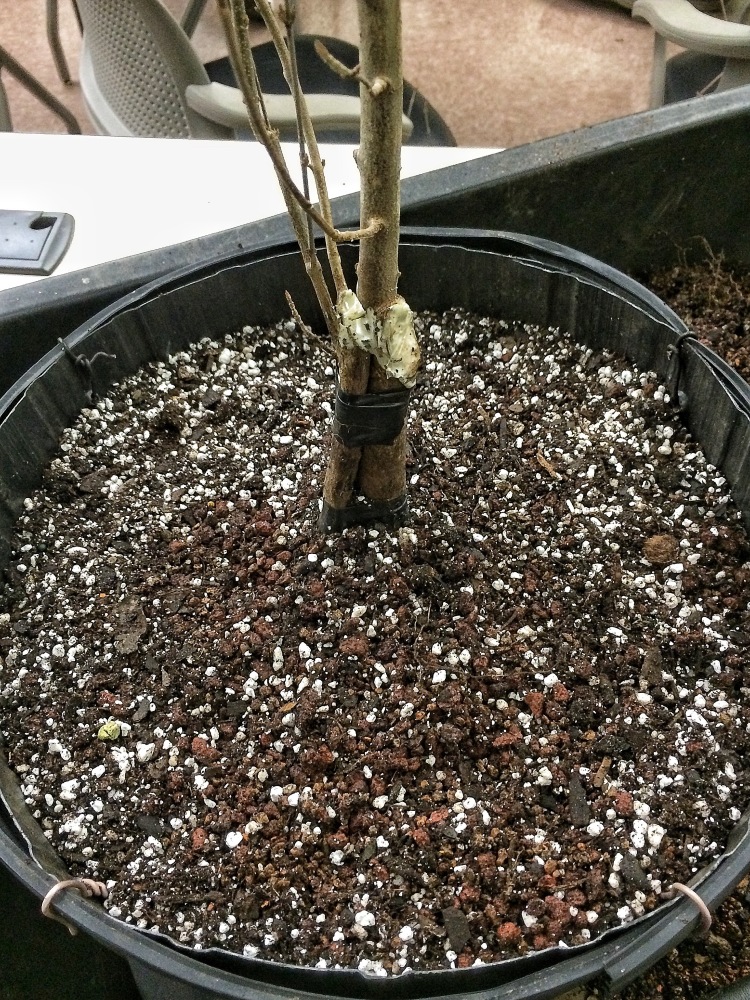 ﻿The yellow stuff, for those who are asking, is a pre-emergent weed preventer (much like Preen, but I use Oh2). It is a fantastic idea to stop weeds before you get them.

I did one more (hopefully) fusion, this time with only two trees.

I achieved better trunk contact with this one. We shall see what happens and I’ll update as needed.

Oh…..to answer the question before it’s asked, why would anyone bother doing this instead of putting the tree in the ground and growing it out? In Florida, I could get the trunk just as fat in a year if I field grew them. I will, by the way, but the reason to do this is to give the trunks more character to begin with. If you grow it out you end up with a straight, smooth, telephone pole. This way there will be fissures and muscling in a shohin sized tree from the beginning of the styling process.

And those roots!  There are lots of roots radially arranged around the trunk now. 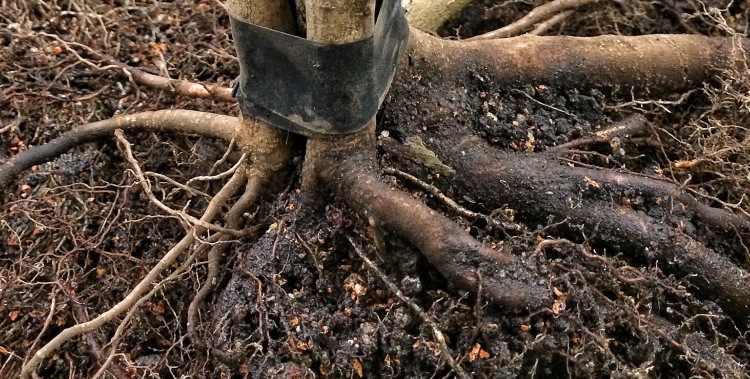