For you bonsai people out there, I know this seems like a big departure, but I started my journey as a fine artist and I felt the need to paint something.

It started with this sketch:

Those who follow me on social media have seen it already. I asked, almost hypothetically, if I should expand the idea into a full work. The response was a yes, so I thought about it and went into the shed to look for a surface to work on. I had decided to use a wood board already, and I just needed to dig one out.

The next step (as it is with most art)  was to stare at the board for a few days and figure out what I needed to do. Comparing the process with bonsai, you could argue that it’s a harder starting with a blank “canvas” as opposed to a physical tree or, quixotically, that it’s easier, because you don’t have an existing structure to get in the way. I’ll let you decide because whatever I say won’t sway you anyhow.

As the idea of the piece took shape in my head, I decided that some of the details in the sketch were either not right for the theme or not as personal/applicable to the subject. And so, after all that, it’s time to begin.  Unleash the Kraken (rum) and Sheldon.

A charcoal sketch to give me some lines to work with.

Blocking in the walls.

I showed the progress pics to a friend and he, “literally” (sorry, he’s a millennial and uses that word often) thought I had built a 3d box. 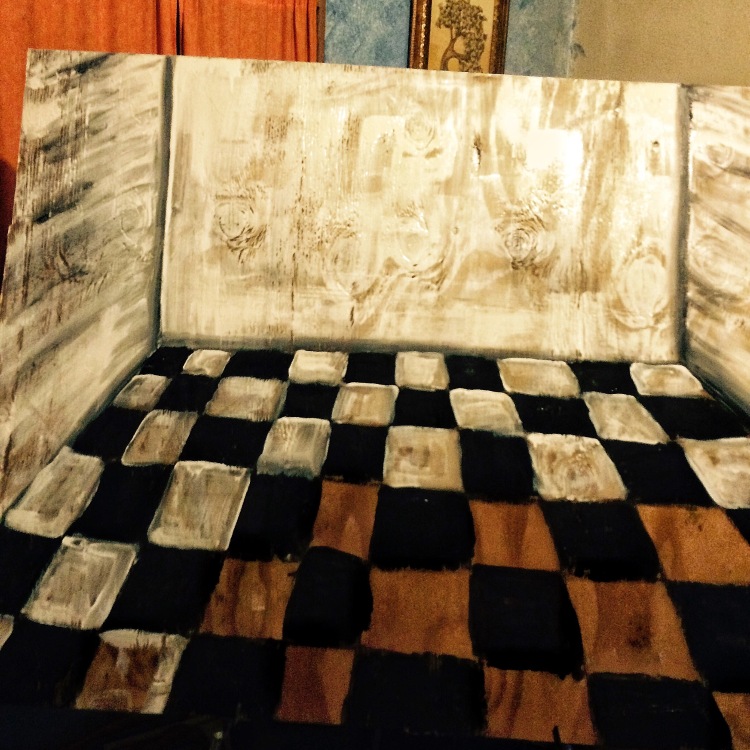 A little distance breaks that illusion.

Next, after several sketches (or studies. Each art form has its own jargon, like nebari or Jin, in bonsai) of the seated figure,  I picked this one.

And photocopied it several times.

I could just put the original sketch on the painting. Or paint the figure in. But the process of replication adds random effects to the image though, and that’s a technique I use often in my works.  This “accidental” idea is prized in bonsai: a unique yamadori, or tree collected in the wild, has more value and artistic challenge than one created in a nursery. I like the image on the left, it has some reproduction errors I like.

You’ll notice that you can still see, if you look closely, the paper that the image is printed on. That’s just technique. I could do a totally realistic rendering where there isn’t that reminder of the piece being a mixed media work. But the jolt of seeing the paper, or whatever other 3d object coming of the flat plane of the board (there will be more…) brings your thought processes to the forefront of the act of viewing, as opposed to just lazily watching a scene. It also involves the viewer in not just the creation but the act of creation (you see the brush strokes, the sketch, the squiggly lines).  It’s a part of the dialogue I have as an artist has with the viewer. I find it important that the viewer has an idea of the workings and perhaps the thoughts behind the inclusion of those images and effects on the finished piece.

Next is the insertion of the “painting” on the wall. In the sketch it’s a landscape but I don’t think it’s quite right. Here are some ideas: 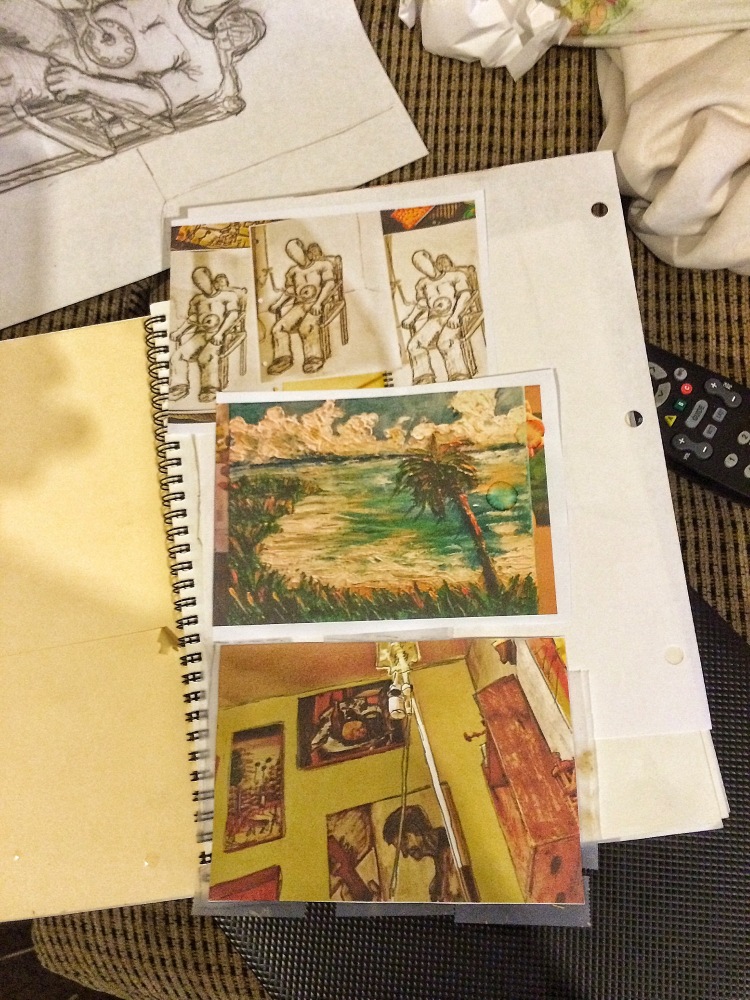 I like them all but I decide to go with a printed pic of the initial sketch.

Framed even. What’s next? How about a guitar and a fan. My biggest fan (my only fan after this post, probably) 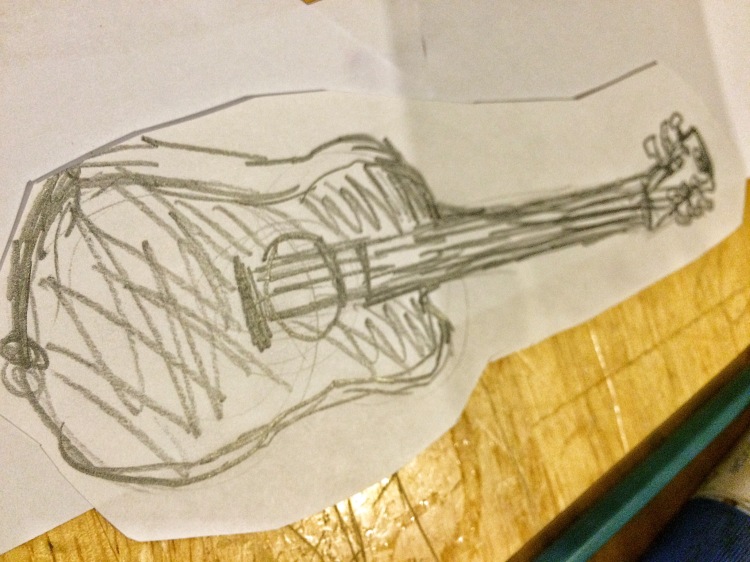 Again, I draw them out on paper and glue them to the board, and add color and paint to include them into the scene. 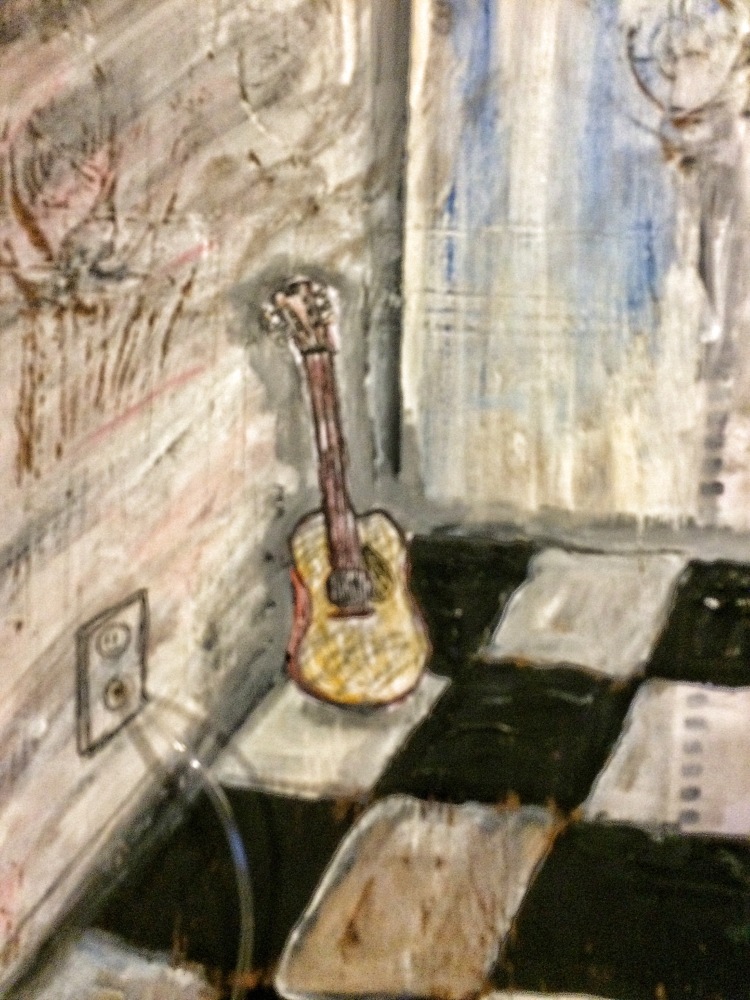 And one last object: an actual I.V. line.

I drilled a hole in the board and inserted the line into the stomach of the figure and the “outlet” on the wall.

I outline a few accents with pen and ink and pencil and added some more details.

And I believe I’m done.

It is easy to overwork a painting so sometimes finishing seems  like an abandonment instead of an ending. It’s emptying. But I’m satisfied with it. It came out the way I saw it in the sketch and in my head.

I’m not going to outright tell you the meaning of the piece (in bonsai it’s usually pretty easy to guess. “Uhhhh, dats a tree!”) but you should be able to figure out some of the themes. It’s not all that obtuse.

Thanks for enduring this brief and wacky departure from bonsai, I know that some of my regular readers may not quite appreciate the style or execution or even the melodramatic theme of the painting (or they are wondering why I didn’t just paint a picture of a guy working on a bonsai….I mean, duh, isn’t that all you need?) but as I said, it’s my blog and I believe I need to fulfill the “Art” section of the “Adam’s Art and Bonsai” title every once in a while.

Anyway, I’m seriously thinking of soup for the next post. Does anyone have a preference as to what recipe? Or maybe that Brazilian Raintree I talked about? Or……..