Flashback to December, 2014. I was in the hospital, full of shit (I’m sure there were beans involved), trying to stay alive. I guess there was a mighty windstorm (or my rambunctious 6 and eight year old boys) and one of my Brazilian Raintrees was blown/knocked off the bench. My brother in law got it cleaned up and fixed as best he could. The pot, surprisingly, didn’t break.

When they finally let me out, after some exploratory slicing and dicing and a bit of plumbing reorganization, I had this waiting.

Yup, that’s a big piece of deadwood, broken off.

Here we are today. 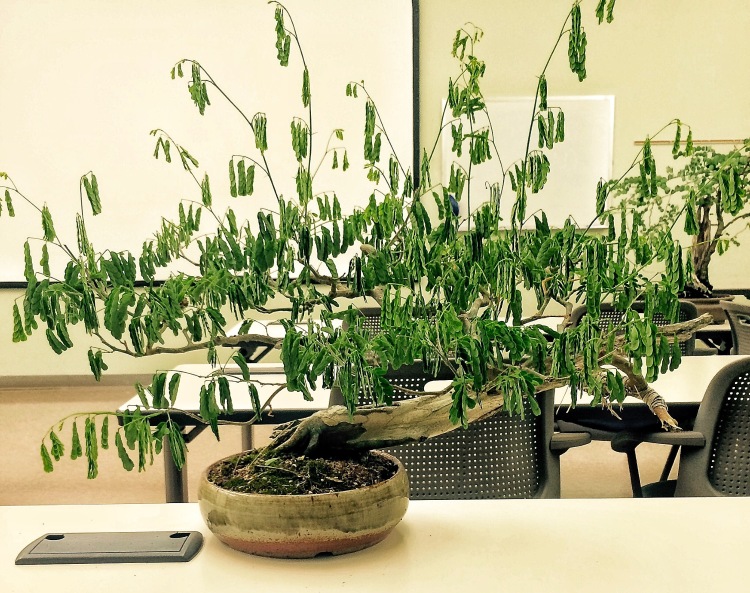 Ok, I know, let me defoliate it so you can have a better idea of what we have left.

The big difference is the missing Jin, of course, that big, beautiful, piece of deadwood that will be mourned like your beloved MeeMaw, she of the marshmallow jello salads and afternoon pink lemonade (real pink lemonade, look it up) that blushes your cheek and makes you smile. 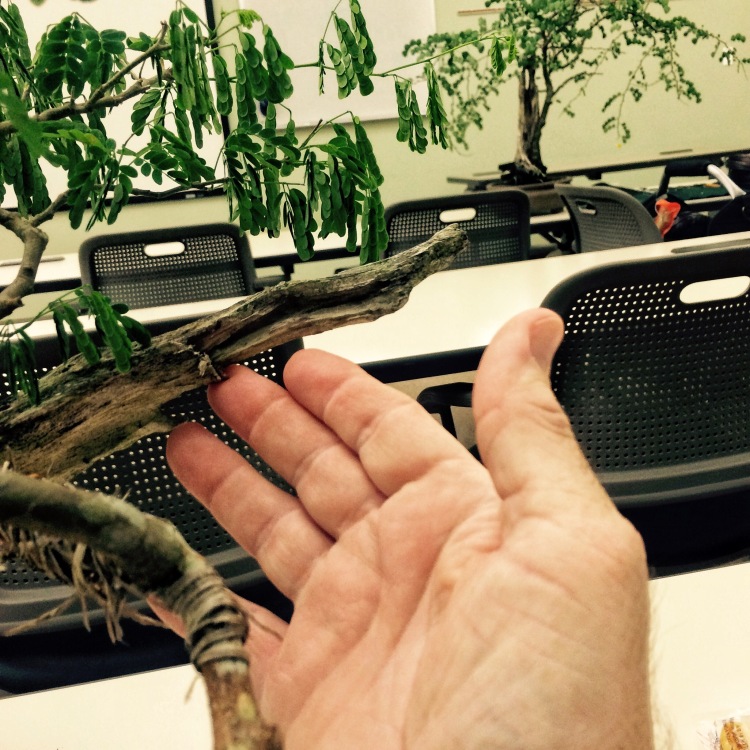 What else broke off was the branch on the right.

The fall also split the next branch up and Steve (bro in law) wrapped raffia around it to try to save it.

It’s a strong tree and it worked.

First, let me explain the wilting leaves you are seeing and worrying so much about….

….it’s because it’s night and the tree is indoors. The BRT’s leaves just do that in response to lowered light or, as you might guess when you think of the name, in the rain.

I need to repot. I haven’t done it in two years, I think.

The tree also wilts when it’s dry. Which it does easily at the moment because it’s so pot bound.
Snip!

Let’s talk about the pot, it’s made by Paul Katich of Bellota Pots.

Beautiful glaze, awesome lines. Really a work of art. And it didn’t break when it fell of the bench.

The roots are pretty healthy….

So healthy I might not need the prop rock anymore.

I mentioned in the title that this was a redesign. After losing that Jin and that branch, the whole tree was bass-ackwards, falling over and just not tree-like.

There are no back branches left if I use the original front either, and the dead wood is hidden. I know! Let’s flip it around.

Yes, and maybe an angle change.

Ok, I might stll need that rock after all. 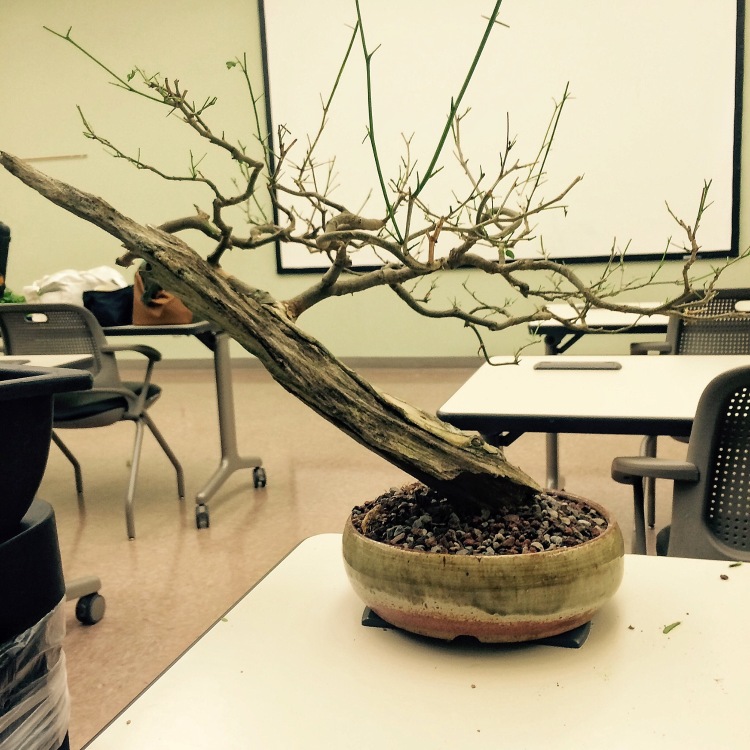 Now, back at The Nook (I’ve been at the CFBC meeting, if you couldn’t recognize the locale) I need to clean and apply lime sulfur to the deadwood.

Lime sulfur for the preservation and color. 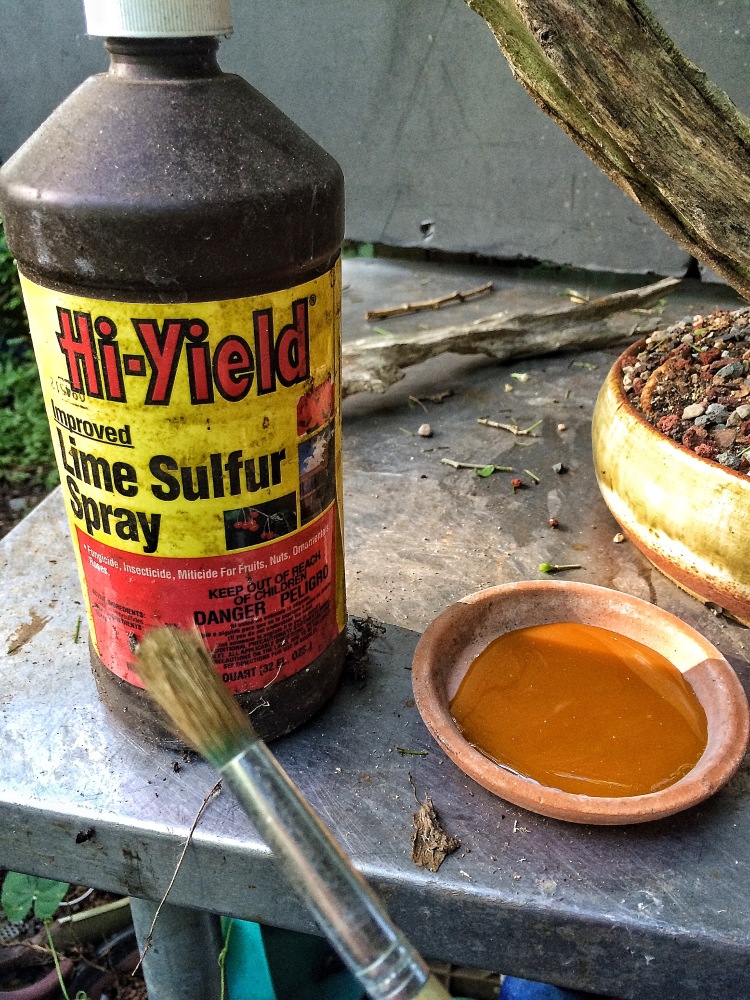 I use lime sulfur full strength, since I will get asked and (at the chagrin of the re-bottlers out there, to whom I apologize to some but not to others) you can find this brand on the Internet, in this giant bottle, for less than buying a tiny bottle that says “for bonsai” on it somewhere. Just be aware that there are several states in the U.S. whose respective regulatory agencies have limited or banned the sale of lime sulfur and you may get a visit from a jack-booted, polo-shirted bureaucrat, trying to justify his continued employment, vampiricly suckling on the public teat.

And then back on the perch from whence it fell to the earth.

A few more pics: a far off establishing shot and then the inevitable glamour shots.

That’s a tall bench to fall from. Like Icarus, with his fancy set of wings made of wax. Perhaps a less lofty perch? Nah.

No blog post is complete without a good shot of a turgid piece of wood. For you Glen and Seth. Bear and Otter.

The live vein is rolling over the deadwood nicely.

Ain’t nobody gonna call this no tanuki in this neighborhood!

And, finally, the front. 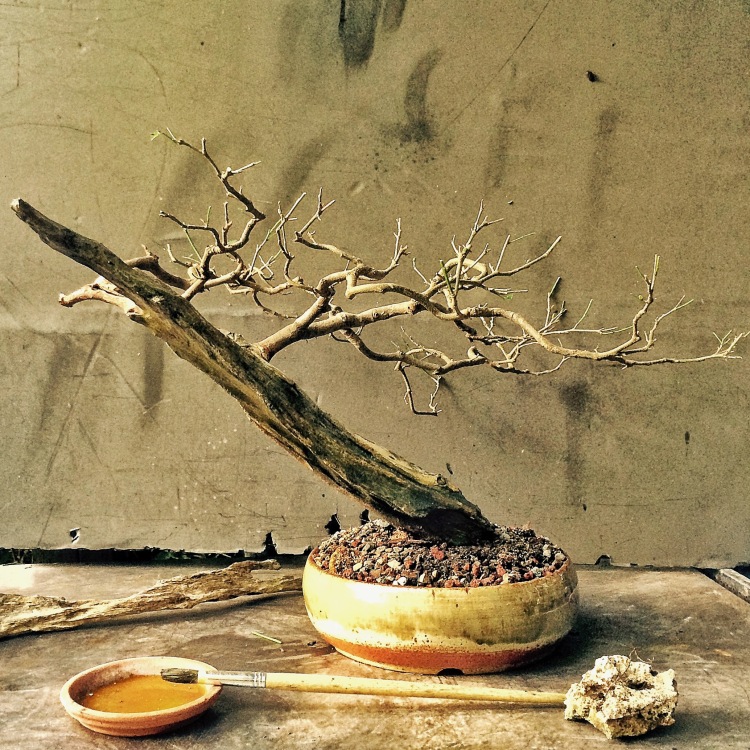 I’ll post some pics on the AAAB Facebook page when the tree is in full leaf in a few weeks, just to prove it’s alive still.

What’s next? P’raps that soup? Maybe some ice sculpture? How about falconry? That might be cool, it’s the sport of princes, they say, and lately I’ve been a royal pain in the ass, just ask my wife.

First, a trip to the Florida Department of Motor Vehicles tomorrow. Wish me the patience of a saint and a disciplined mouth. I’m allergic to bureaucrats.