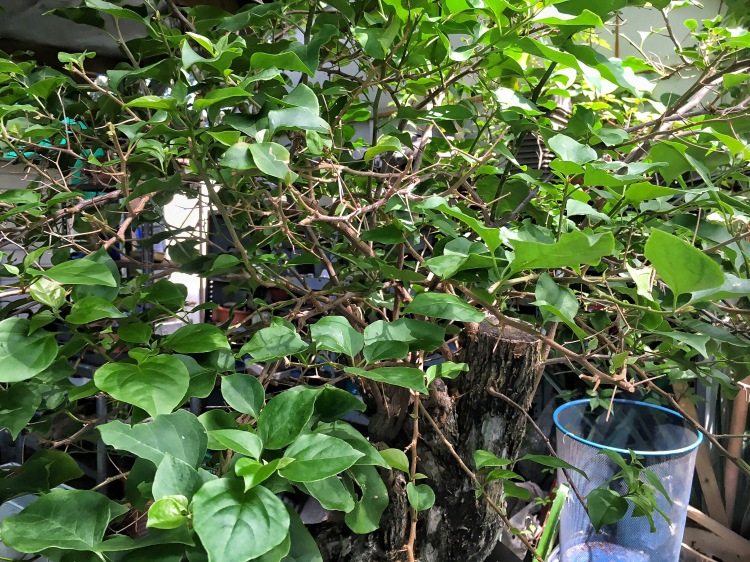 Oh yeah, there’s a tree in there somewhere.

Definitely the back. If you’re on Instagram, here’s a Short Video for your perusement, hey, I just invented a word. Amusement+peruse.  Perusement. Pronounce it pear-uze-meant. Uh huh, I’m just like Shakespeare, fakin’ it until I be makin’ it. Sorry. Bit of megalomania. Must be the hops! 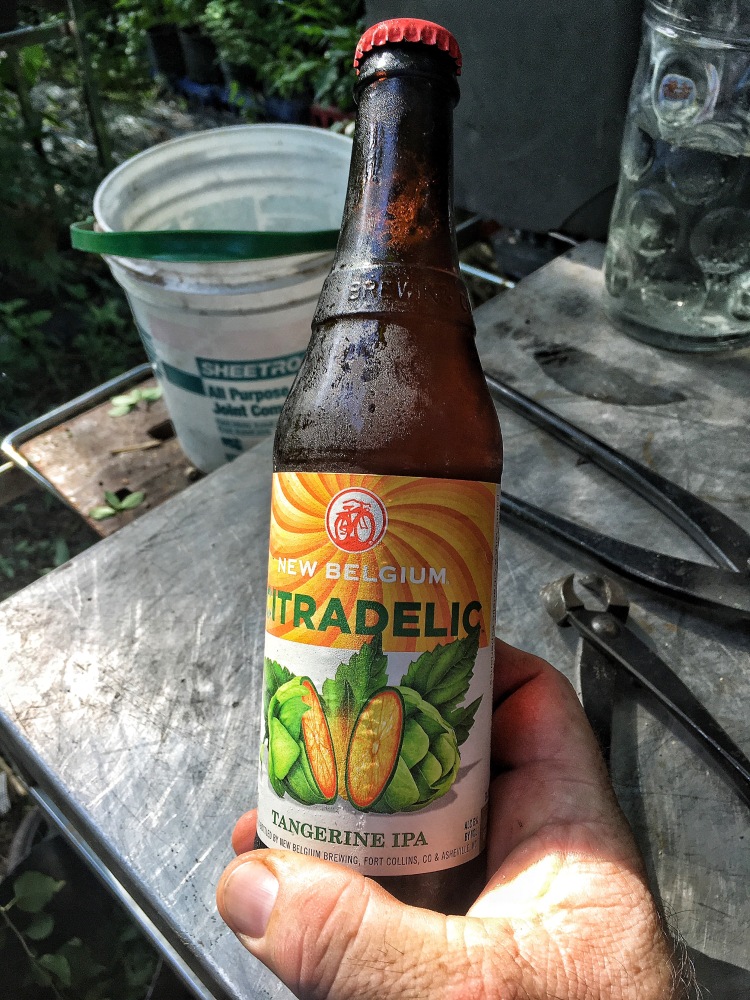 I’m not a hoppy kind of guy. My head is spinning. Seems like a good time to start carving. The tree is a collected Bougainvillea belonging to a client.

All I know is that those are some mean thorns.

I’m going to point at some places that need carving. That seems like the thing to do. 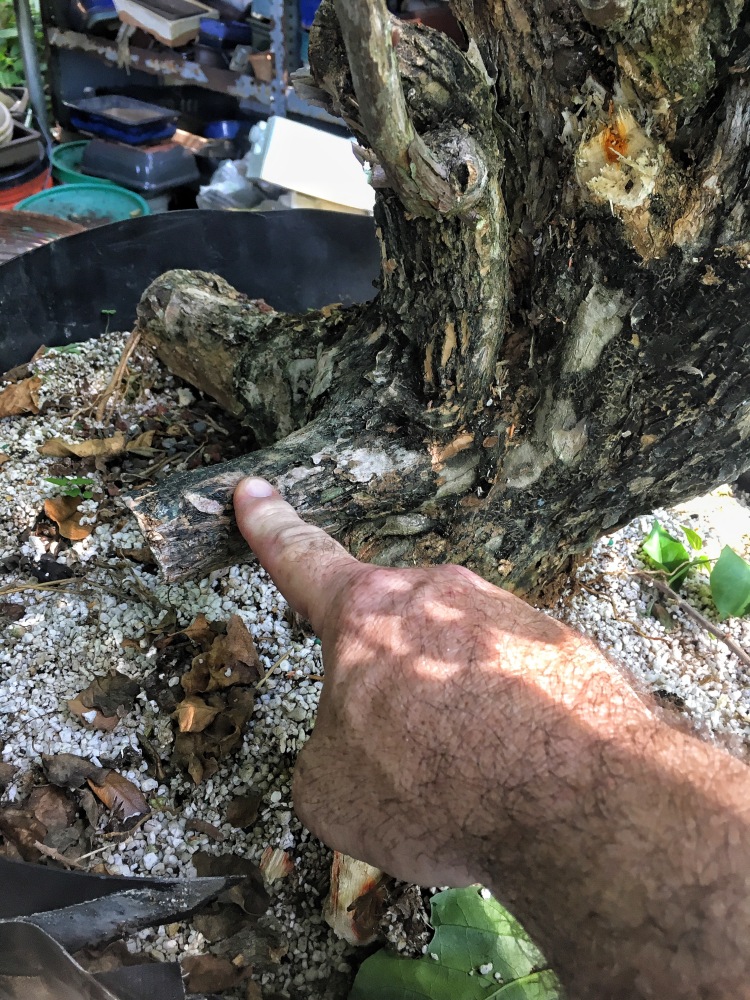 Aw, hell, I’m going to, in the parlance of the trade, carve the shit out of it. 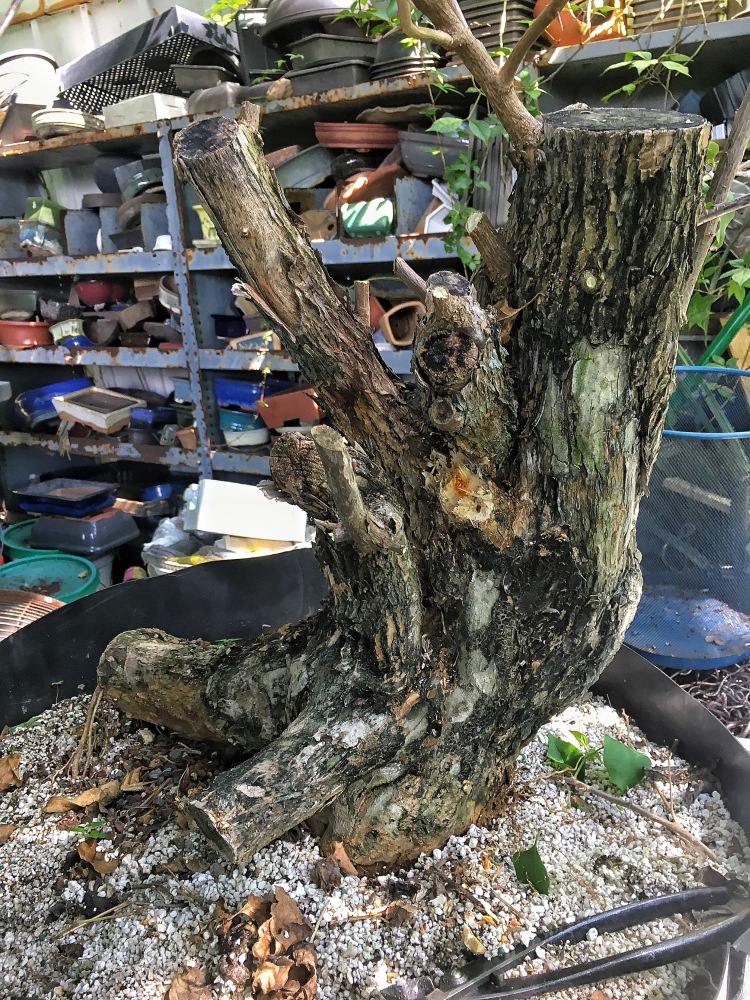 I’ve pruned off all the branches I don’t need.

Before I begin, I bet you’re wondering about the snowy white planting medium the tree is planted in, right?

Here’s a tip from the pros. When collecting a bougie, either put it in bonsai soil, perlite, or pumice, or a mix of the three. The tree will most likely be leafless after collection. Which means no way to use water. Bougies are xeriscape plants.  The coarse structure and fast drainage of those mediums will ensure the best root growth after collection. This is from both mine and Erik Wigert’s experience (and I would posit that Mr. Wigert is the premiere bougainvillea bonsai guy in the world. Me? Well, not so much. Everything I know I learned from him). You’ll get better roots by using a very well draining mix. This bougie is planted in pure perlite.

One more establishing shot and I’ll begin the carving. 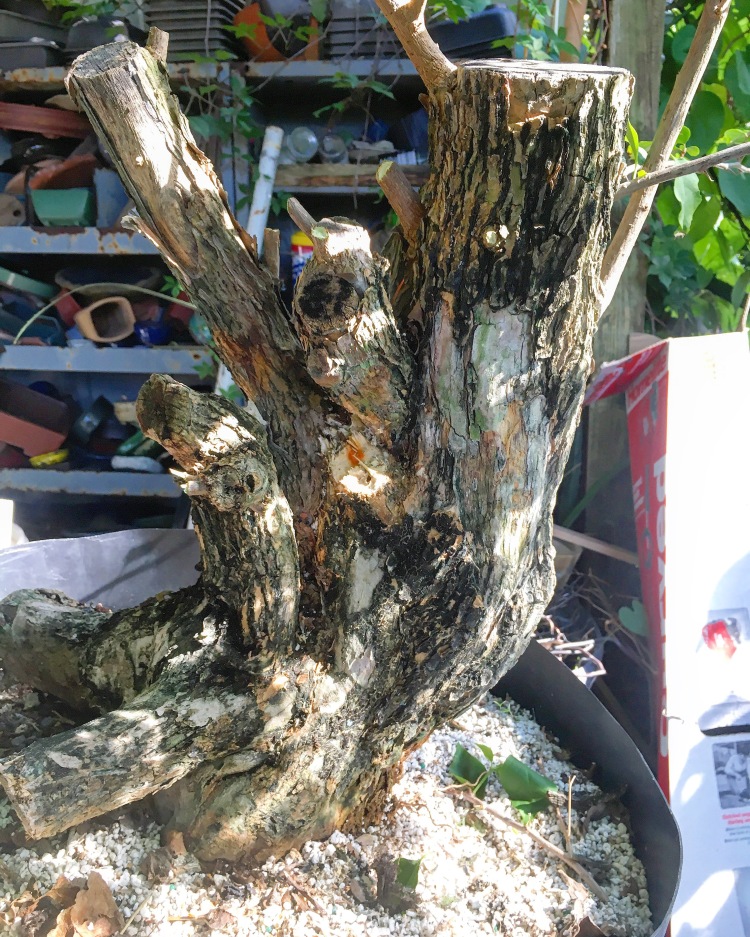 Time for the show.

Here I am pointing again. What’s the point?

Well, it’s all dead there, which makes me feel better about hollowing out the whole front.

My wife insists that I put a few shots of me carving that she took. She’s savvy when it comes to that type of stuff. Next she’ll be having me pose next to the finished tree with a serious expression on my face and the beer hiding outside of the shot. 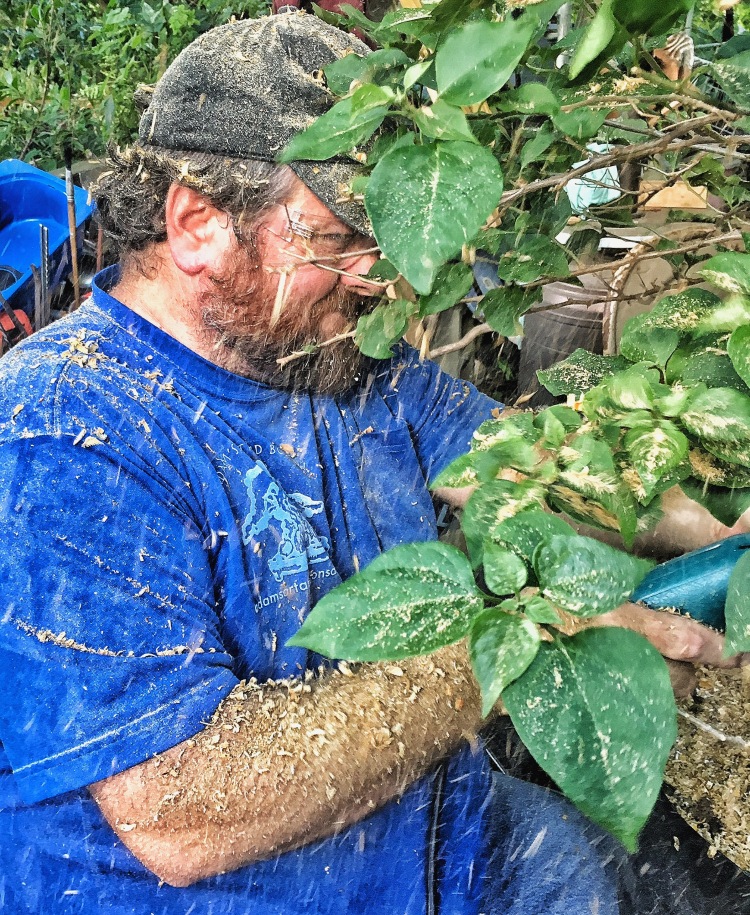 She really got the sawdust flying in the above one. I look like I’m having fun….or trying to pass a meal from Chipotle……

Man I make a mess. I’ve lost two apprentices because they kept having to dust The Nook in 95 degree Fahrenheit weather.
When I teach carving, I always recommend begining with the more aggressive tools first. The ones that make it dangerously easy to remove material. Usually I’ll have an angle grinder with a chainsaw wheel on it but my friend Martha (of Tropical Greensheets fame) gave me some carving bits from Dale Cochoy, a Samurai and this smaller one, called a  Ninja Master. 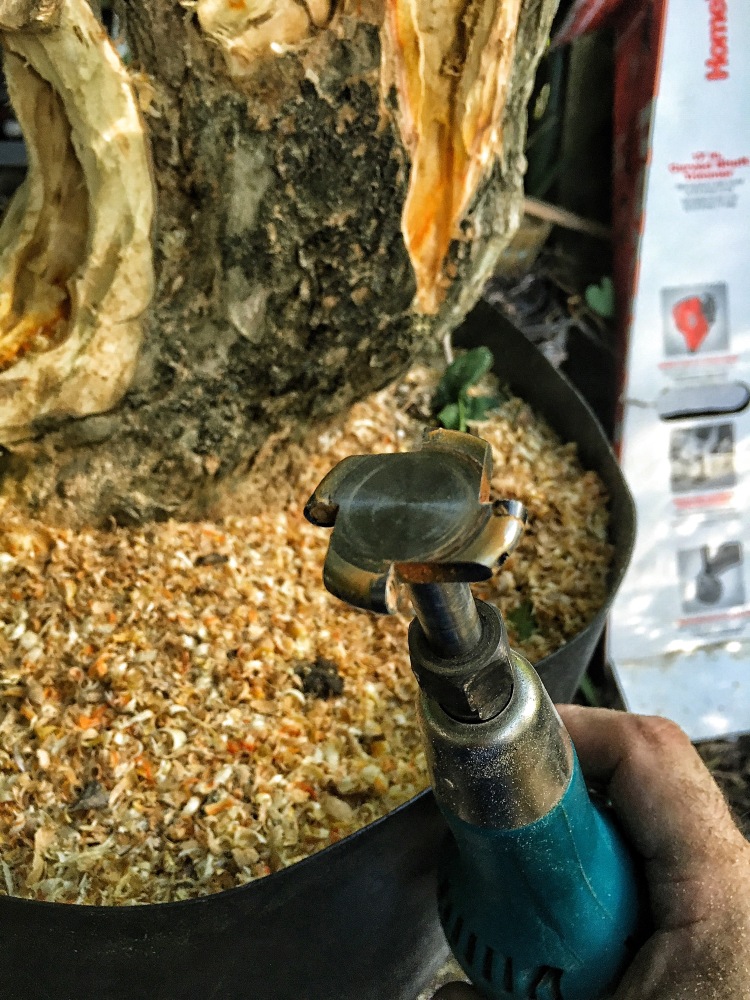 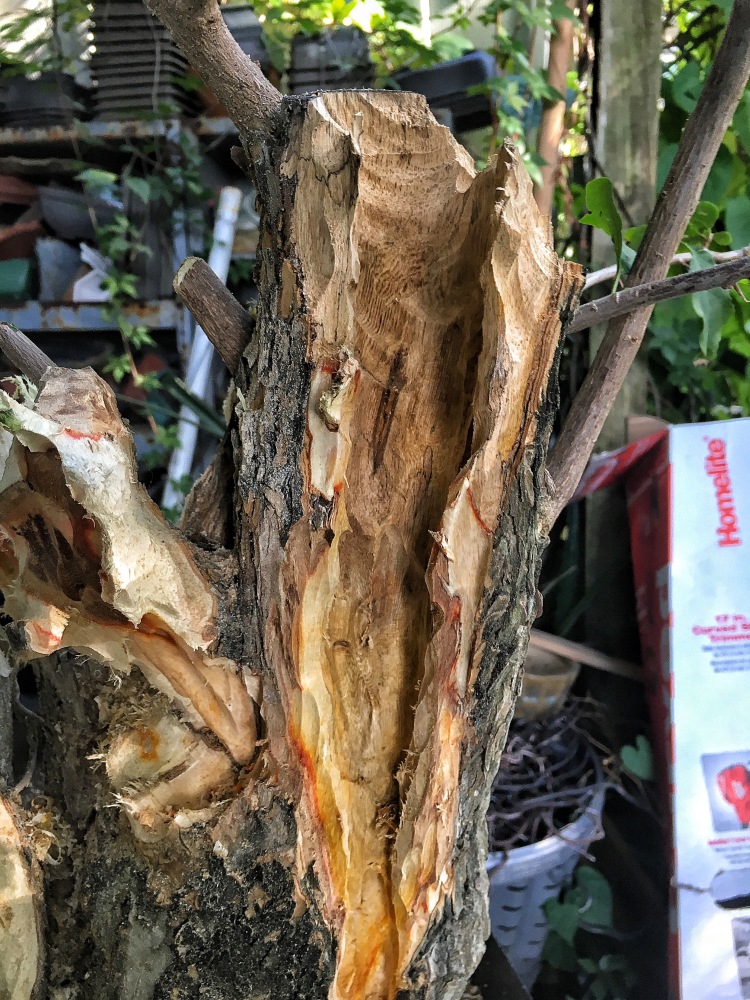 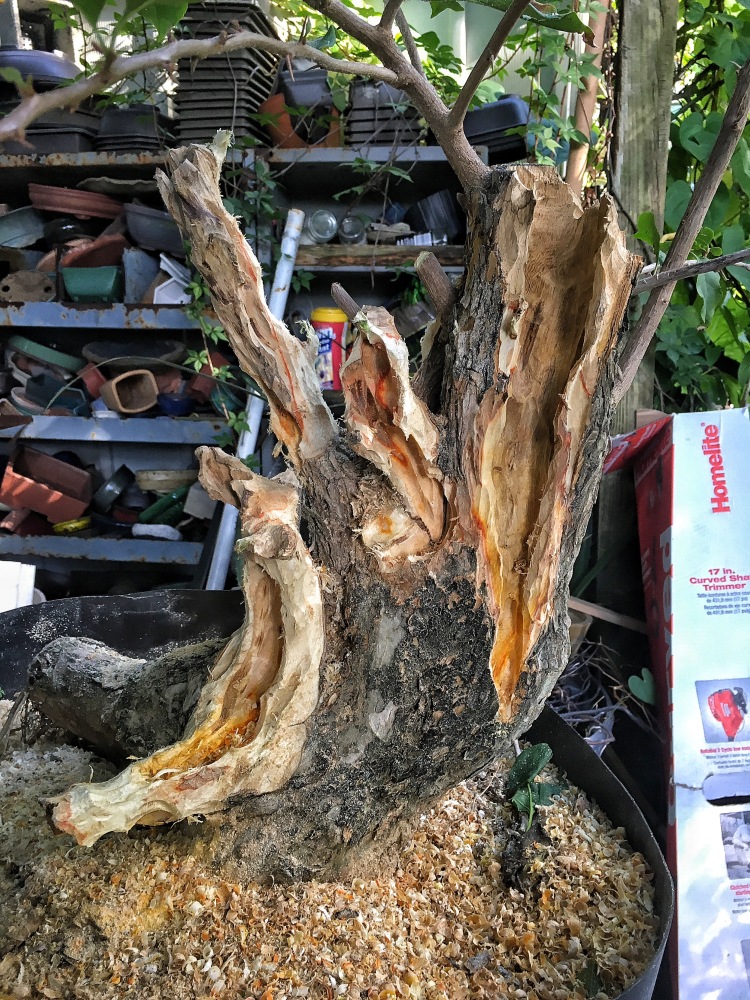 The rough in is done. If you’re interested in Dales carving bits, send him an email (dcochoy@neo.rr.com) or go on his Facebook page Wild Things Bonsai Studio and Yakimono No Kokoro Bonsai Pottery. He’s an accomplished potter as well.

Now I go to my flex-shaft tool with the roto saw bit.

Using it will give an improved  line and texture.  Not to mention control, a die grinder is a brute compared to the flex-shaft tool.  I feel like a dentist when I am using it. Granted, the dentist from Little Shop of Horrors but still a dentist (http://youtu.be/bOtMizMQ6oM) . 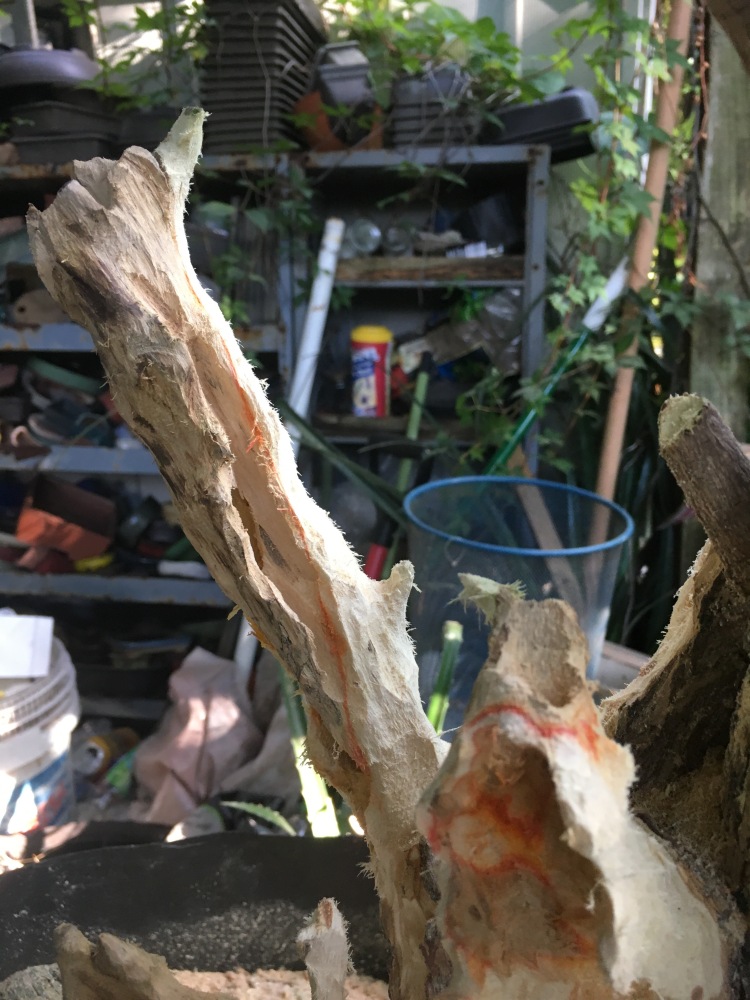 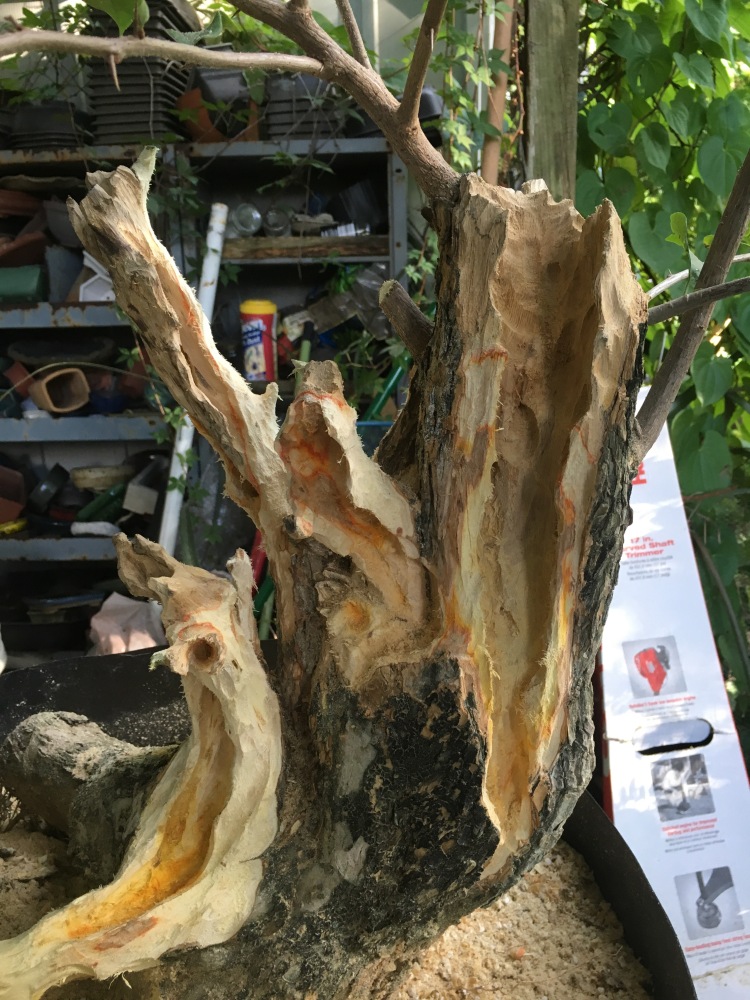 The next step is fire…

……to clean up the fuzzies. 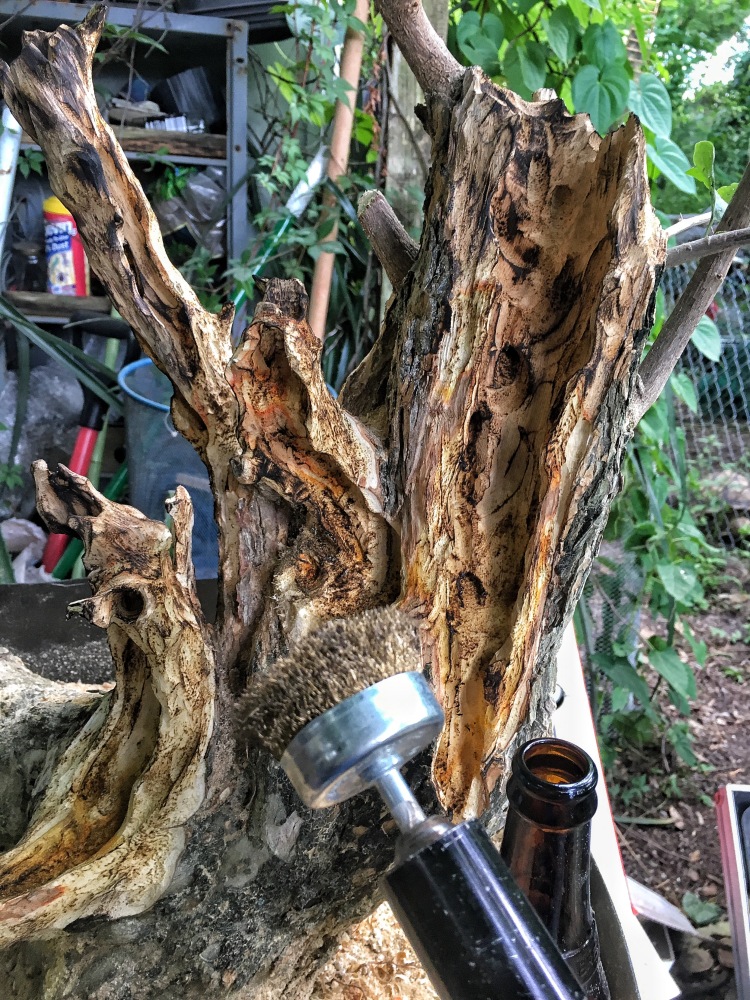 ……to clean the scorch marks and to accentuate the grain. 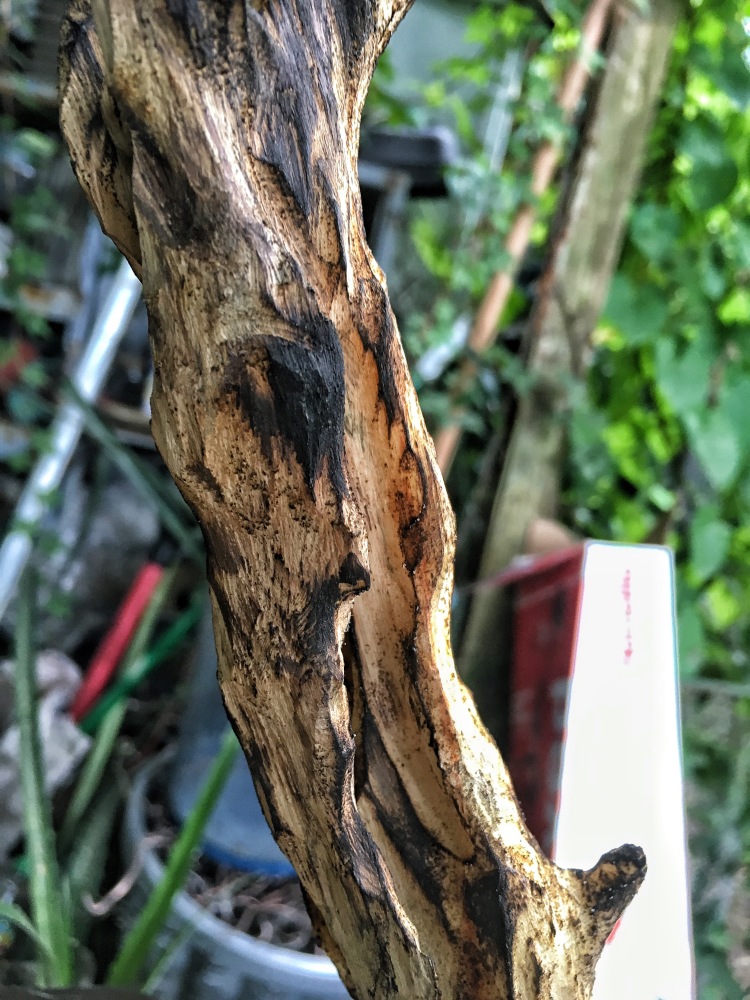 With the carving done it’s time to style.

Here’s a tip for back budding. See, I’m going to cut this branch off.

Although it is bendy enough to wire and position, the angle as it comes off the trunk is not the same angle as the other branches I’m using.

But, if you cut it and leave a stub, it will pop a new bud just under that stub, in case you want a branch there later. Which I think I do. 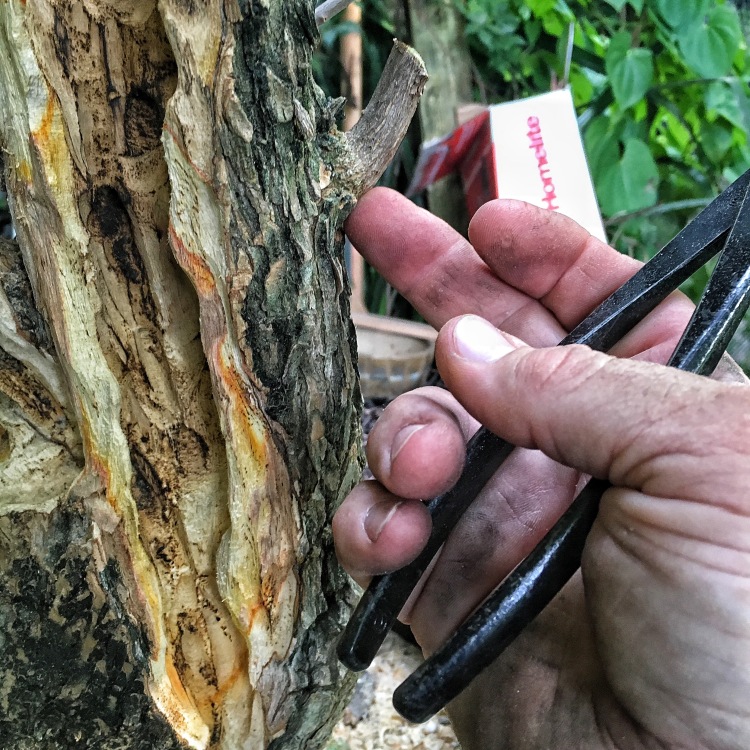 A quick batch of bonsai soil. 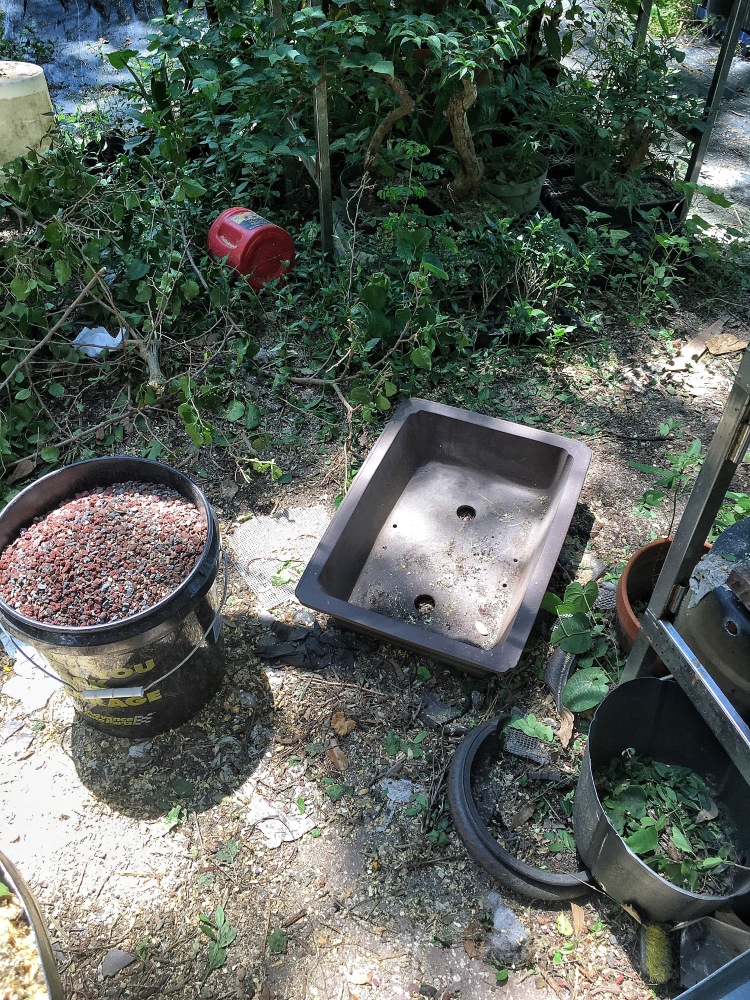 I’ll need to remove this chunk of root.

I could carve it but a knob cutter works. 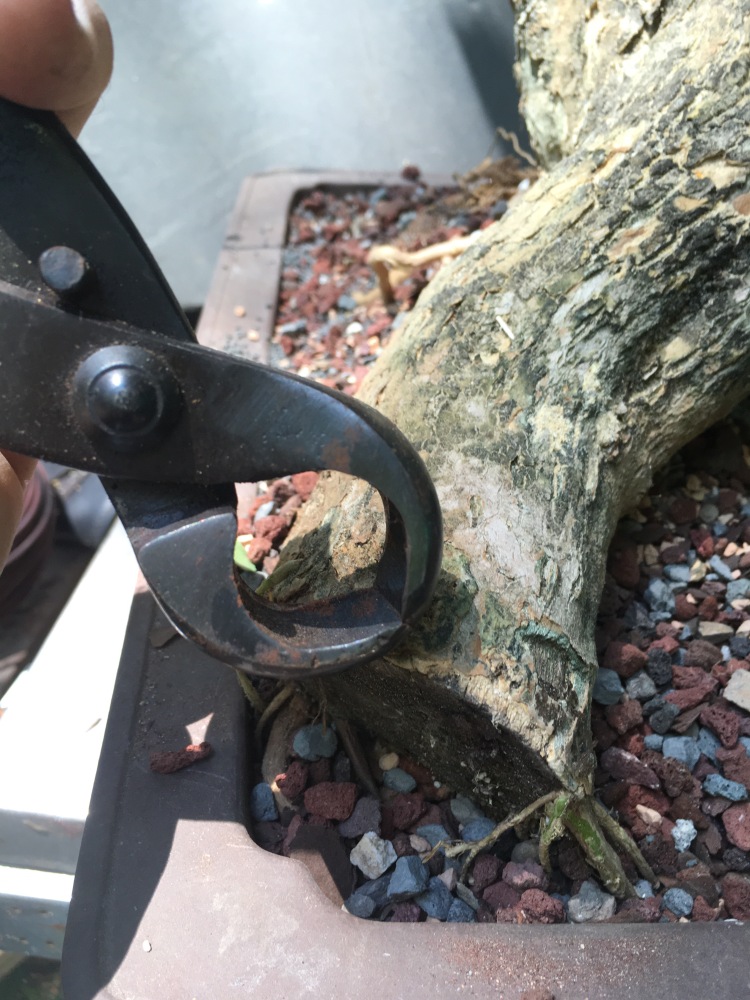 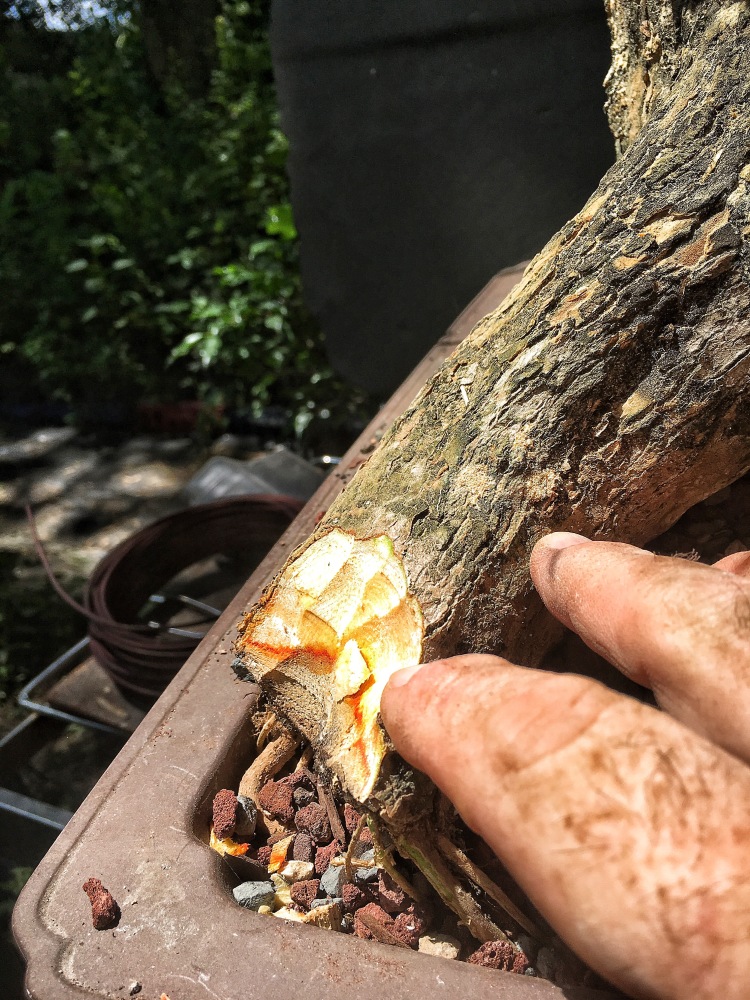 I’ll touch it up later. 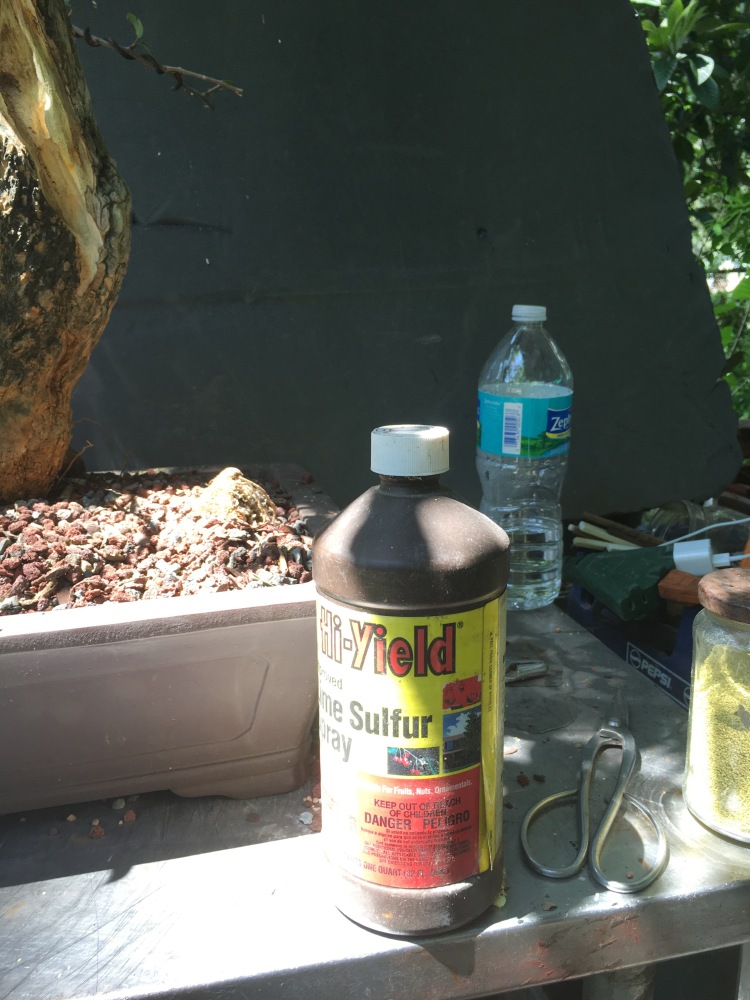 So you’re not surprised, it goes on yellow/orange. 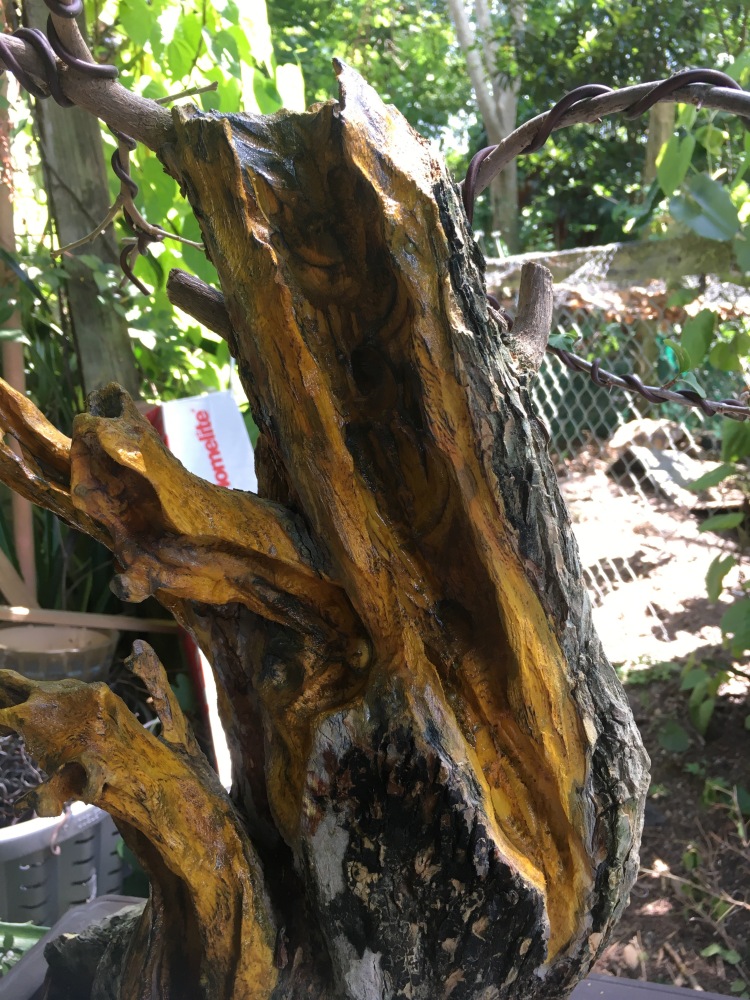 And bleaches to white/grey after a few hours or days. 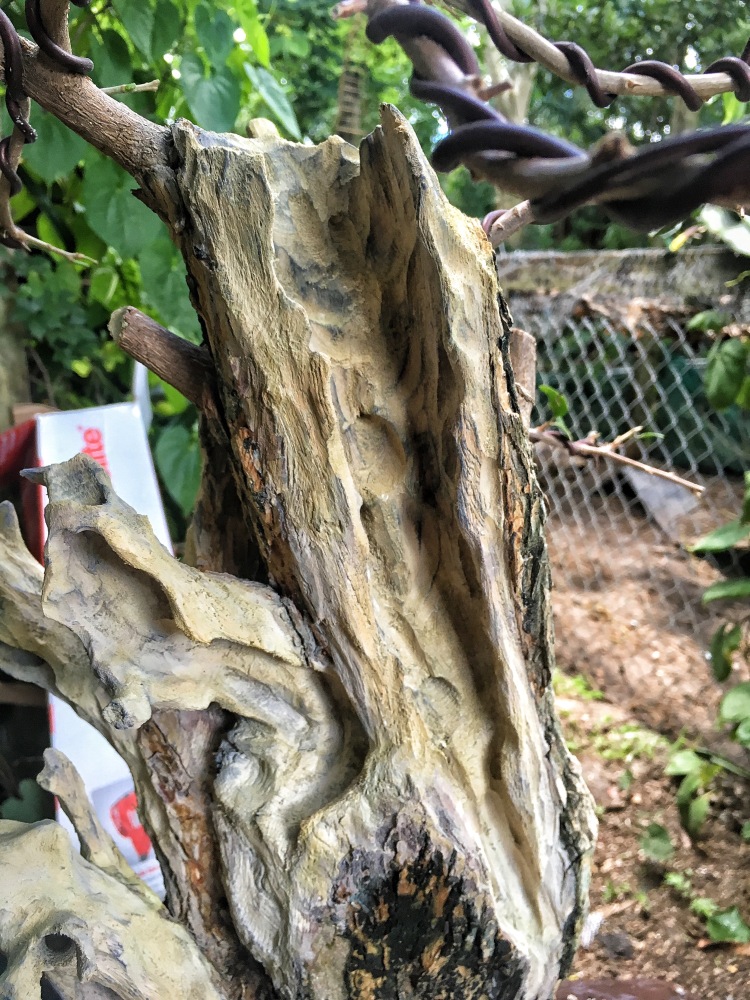 Because of the burnt areas, it takes several coats.

And that’s it. Just needs sunlight and water. 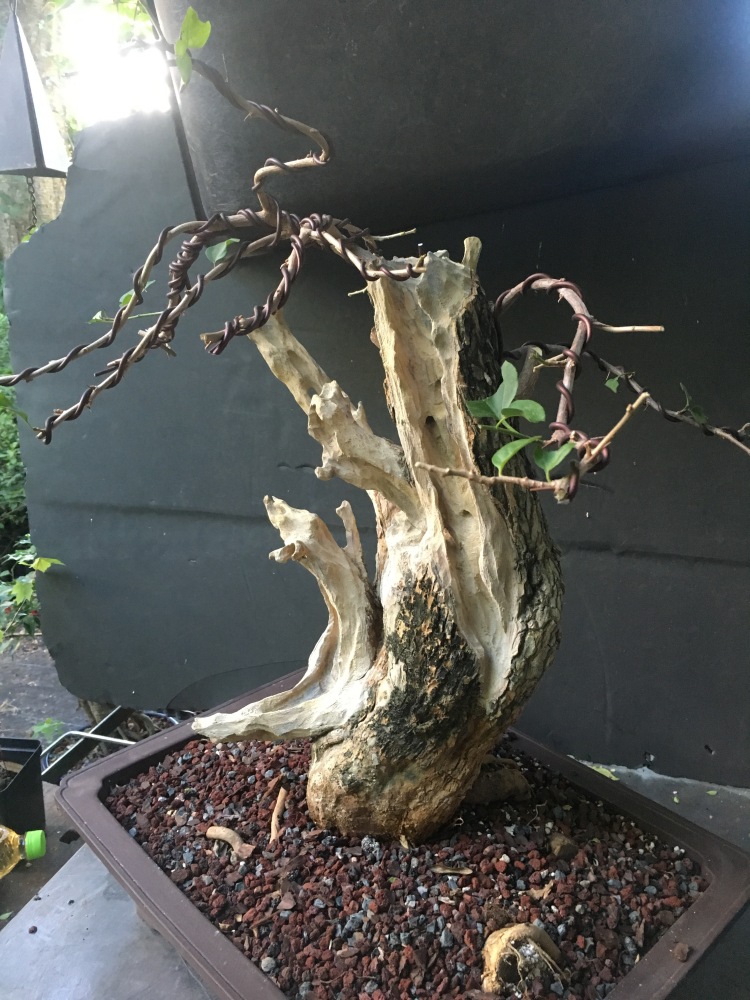 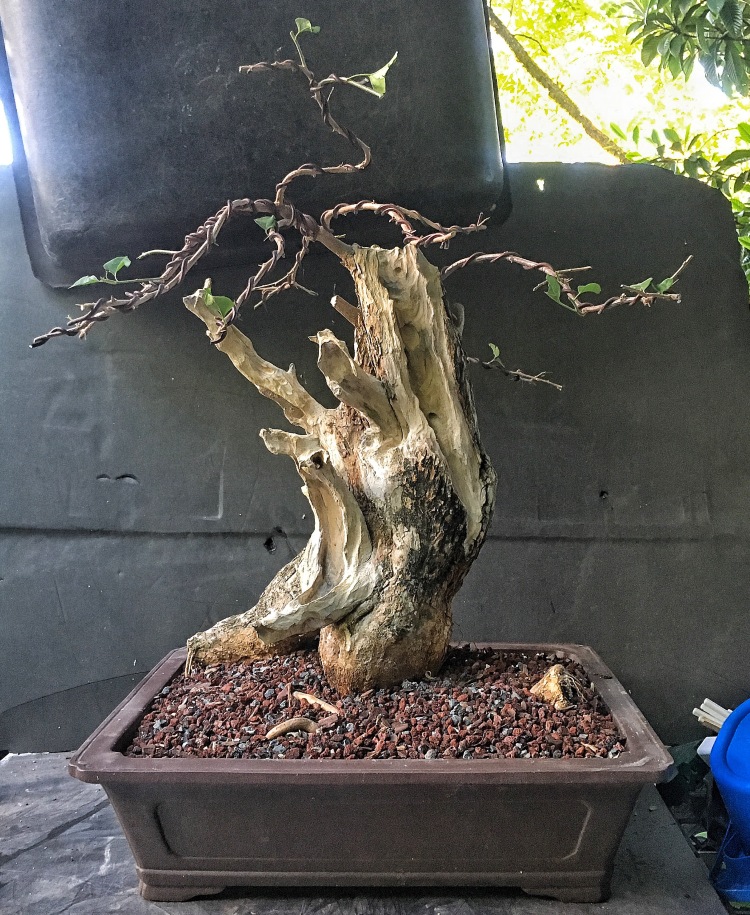 The pot choice was one of those “does it fit?” choices. I think I’d prefer it in an oval. But that’s a few years off. The bonsai soil will really help to increase the root mass and then,  this tree, if let go, would become a bush in a month. The secret to getting ramification on a bougie is to “Topiary Trim” or “Hedge Prune” it for a few months, go in and rewire the new branches, let it grow but keep the canopy in shape with the above technique, go back, unwire, rewire, repeat…….and that’s how it’s done. Keep up the fertilizer regimine, even through the winter. Don’t worry about blooms, that comes later (You want blooms? You can actually time blooms for a show on a bougie. If you defoliate and do a slight repot by just scraping the outer roots a bit, watch the watering, in six or seven weeks you’ll have blooms. It even works in the winter).

As has been usual recently, here’s a short YouTube video showing the tree in all its glory.

It’s been about a week since all the hack job…I mean…ah, the professional styling job. Is the tree still alive? I think we have a winner!

All kinds of growth!

And the nub I left, is it popping where I said it would?

The deadwood has bleached beautifully too. 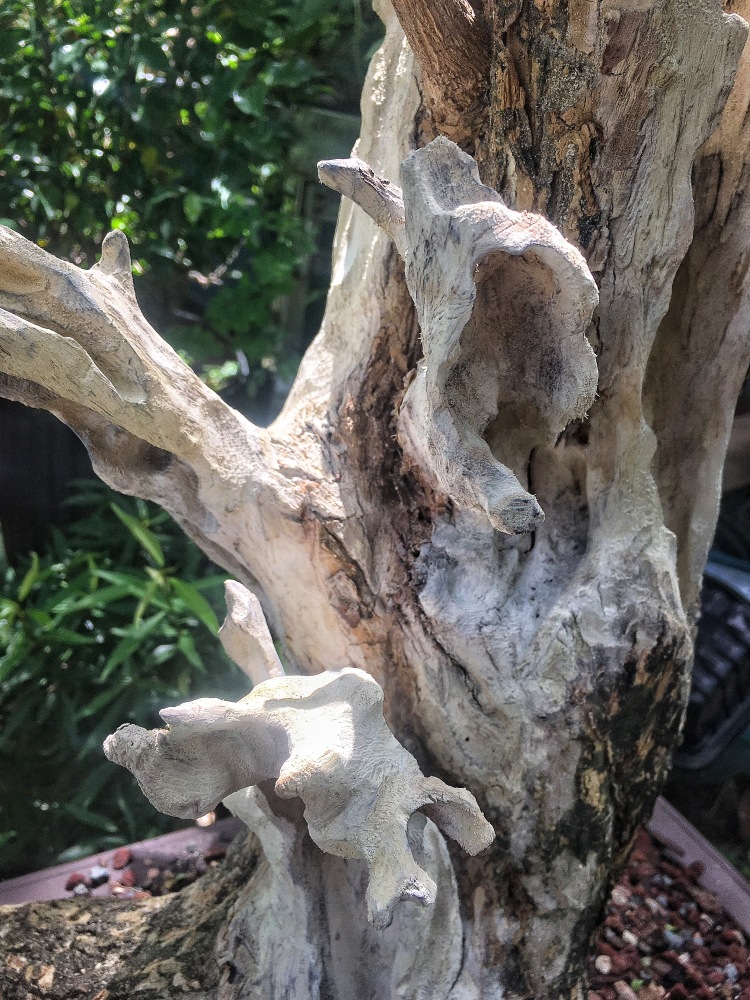 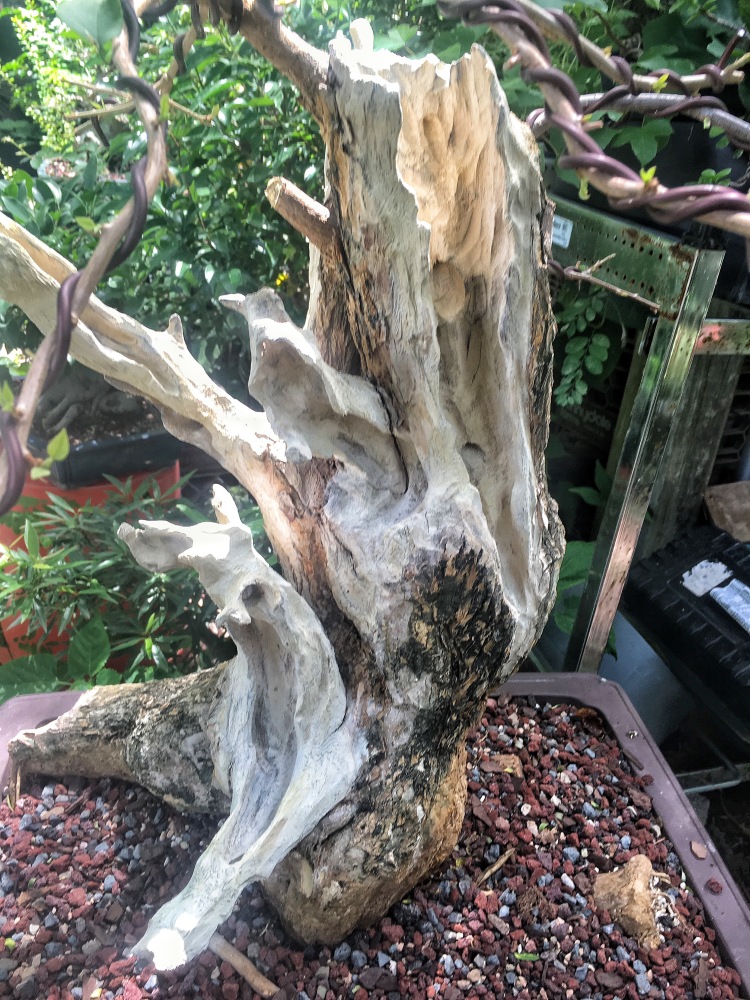 Now, there are those that will say, “Why carve on a bougie? It’ll just rot away anyway! Why waste all that time? Why don’t you clean your room?! You have smelly boots! “. And all that is true, bougies rot. And I have a messy room. And smelly boots. But if you make the wood thin enough, and you protect it with lime sulphur and, ultimately, a wood hardener, it will last. But the real key is making the wood thin enough that, when it gets wet it will dry fast. Fungus likes to be wet. Keep it dry and make the wood inhospitable with lime sulphur and you seriously deter rot.

Next up will be a post on a humble Brazilian raintree. It should be educamationable. Maybe a little irreverent. Possible entertaining. At least for me.