Some of my loyal  and longtime readers know that, for the last one year and eleven months (yes, I am counting)  I’ve been battling a unique health issue with my digestive system  (my colo-rectal surgeon says I am a unique case that her and her colleagues have never seen. My case study was even presented to a symposium of colo-rectal surgeons. I am an oddity and atypical.  Up until her saying that,  it’s only been the psychiatrists who’ve classified me in that way….) I still have several surgeries left in that battle but, in a kind of memorial, I’d like to share a casualty that happened way back in December 2014 because of my struggles. My favorite shohin ilex vomitoria “schillings”.

The tree had many of the qualities we seek in bonsai… 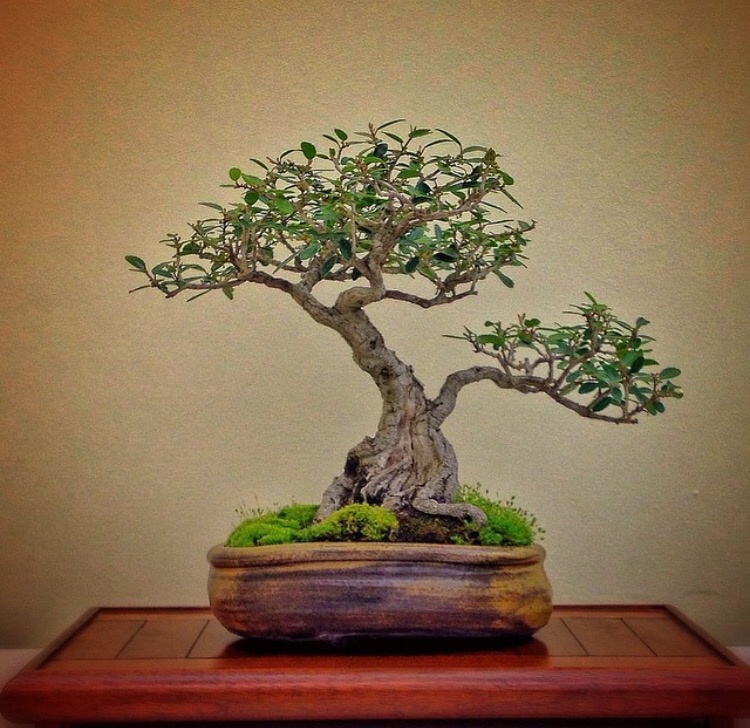 It looked old. I also think it was the best pot/tree combo I’ve ever composed.

Here it is today.

Yeah, it’s dead. It’s sad just thinking about it. It just wasn’t watered for a few days while I was in the hospital.

I’ve been holding on to it just like this since then. 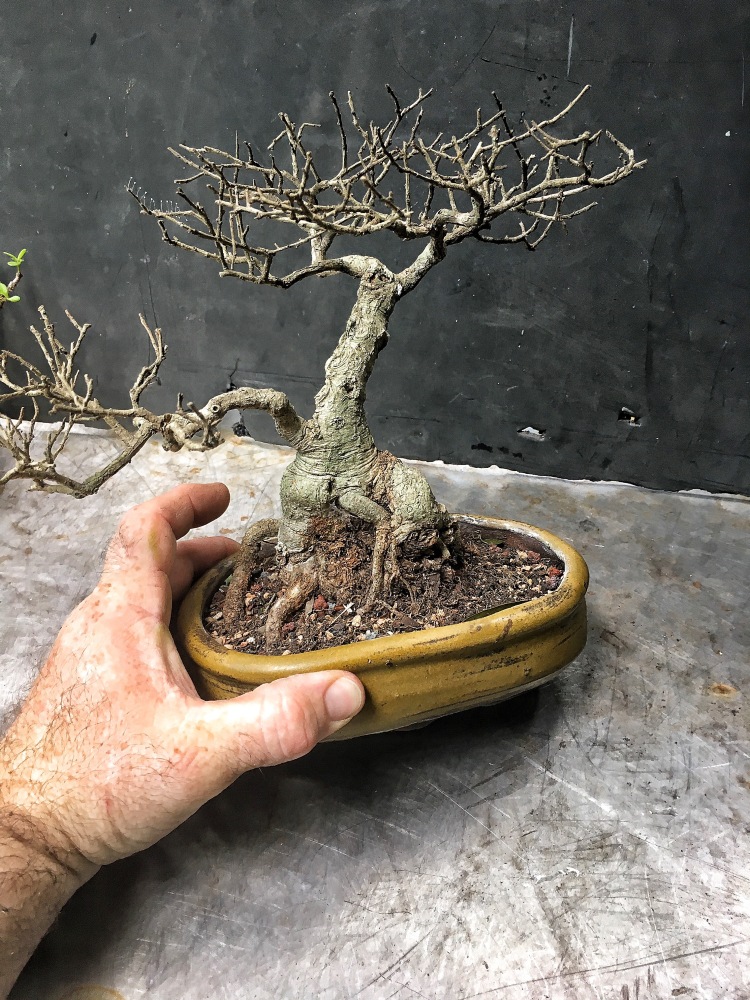 I think it’s time to move on. It might be more healthy for my head that way. 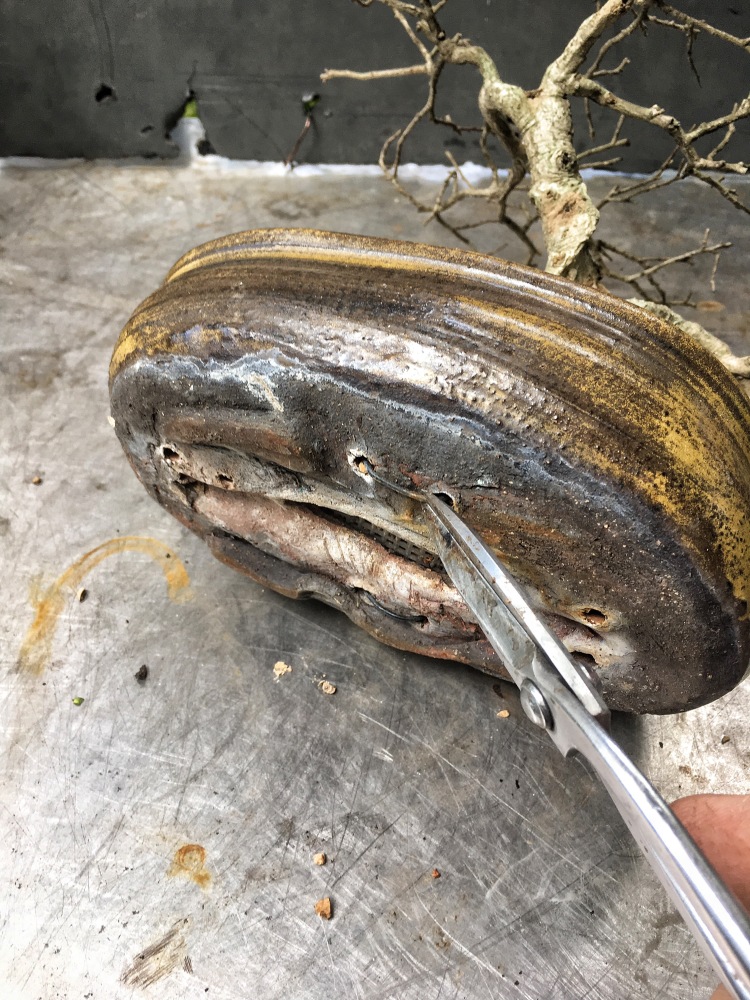 At least I can reuse the soil. And the pot.

But, I need to find a tree for the pot. 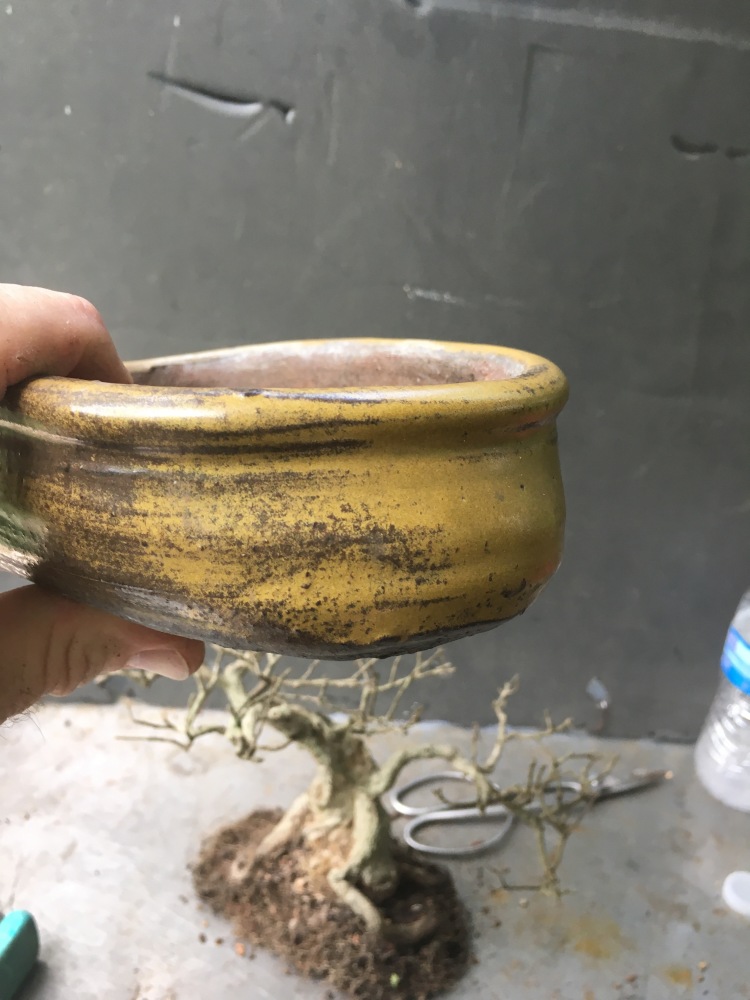 It’s a hand thrown round but then altered into an oval. 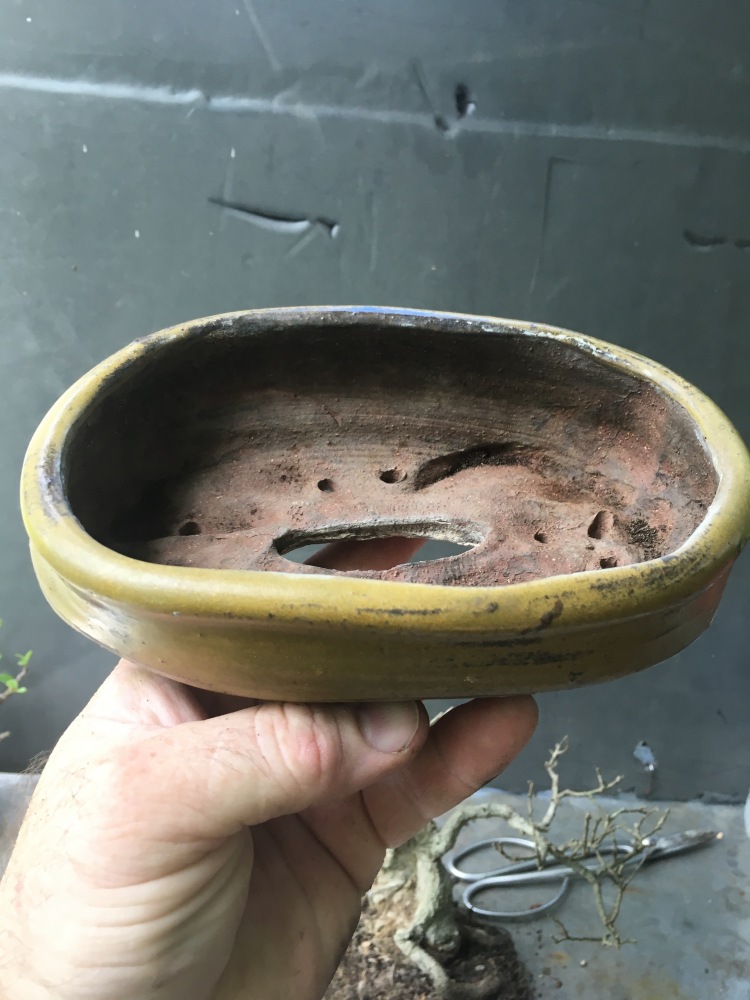 I’m not sure of the potter though. A Floridian, I think.

It’s funny but it’s  usually the opposite procedure, finding a pot for a tree.

Here are several candidates but, unfortunately, they all have good pots.

Maybe I could use another ilex. This one is cool. 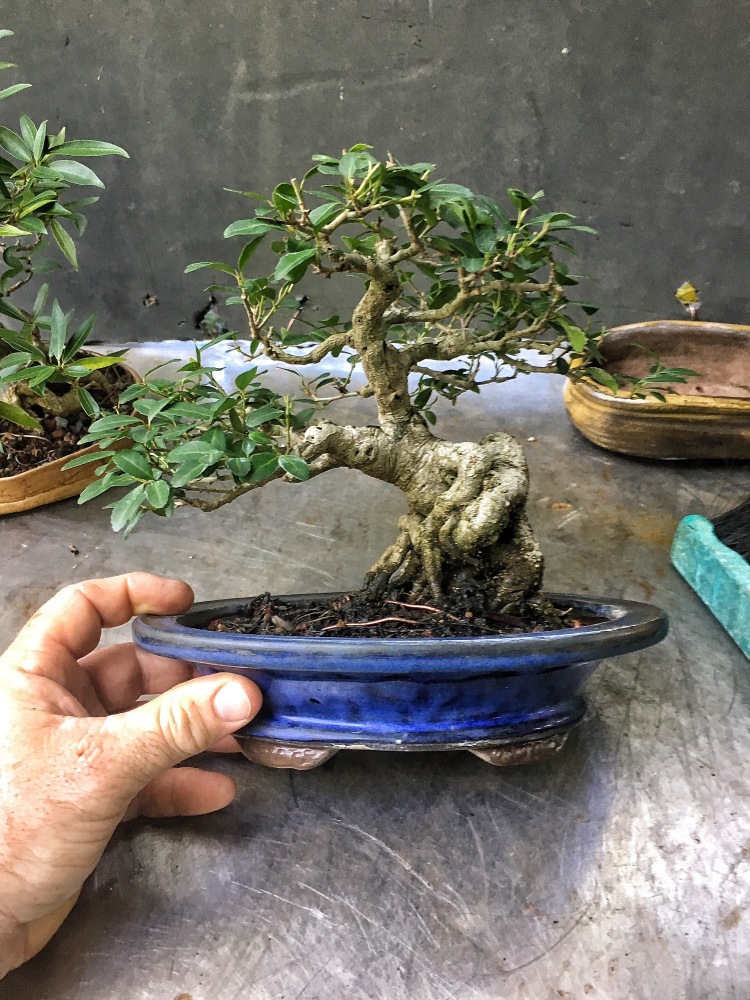 But I like the combo here, a formal pot and an informal, even irreverent tree. ​

I think the ficus will fit….. 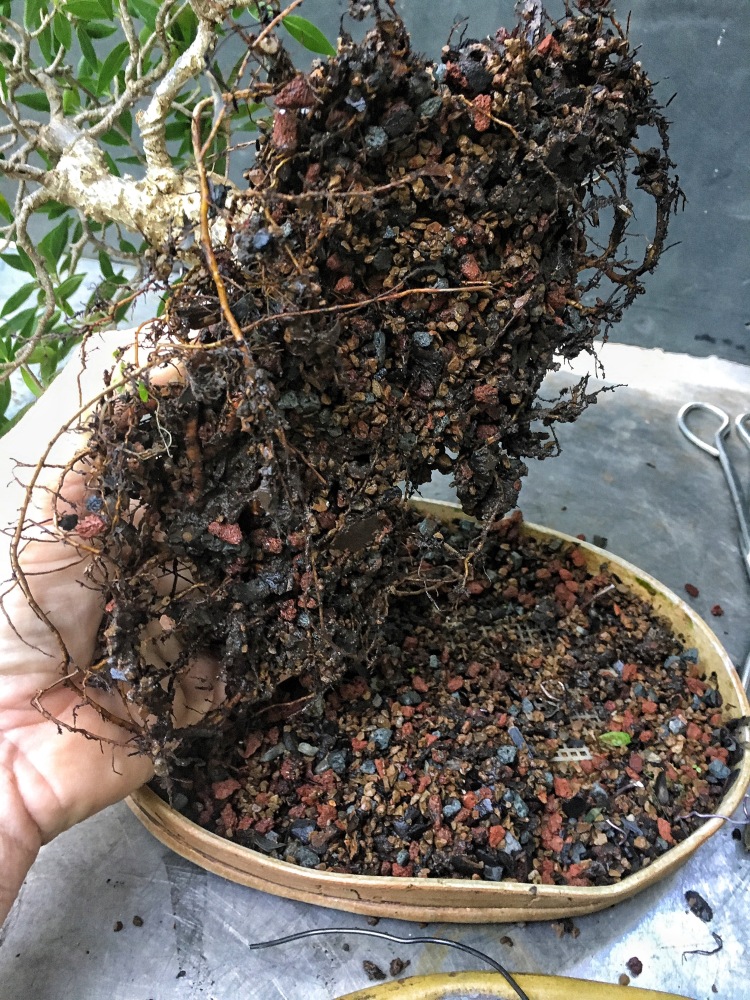 If I shoe-horn it in, it fits. 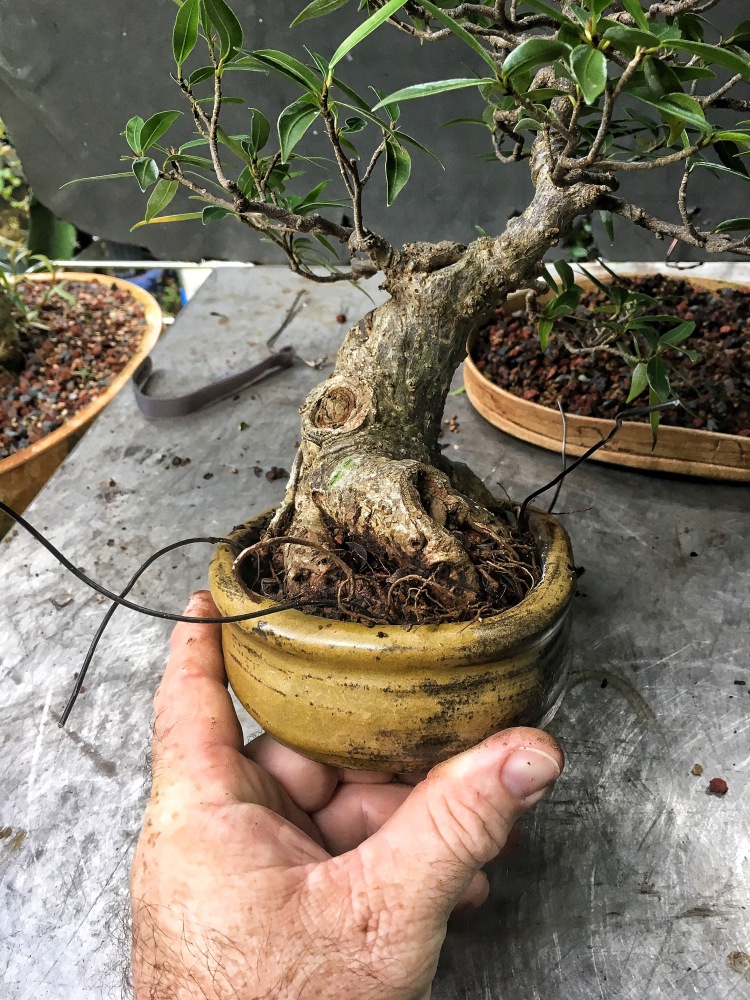 Okay then. Back into the old pot. 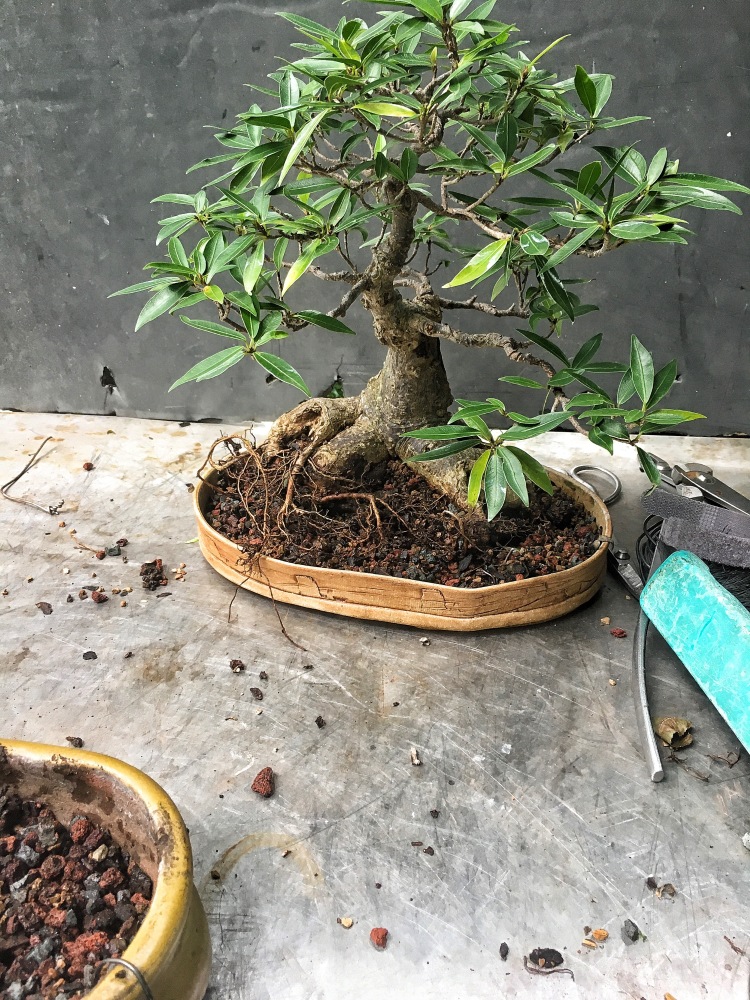 I have two more trees. Another willow leaf. 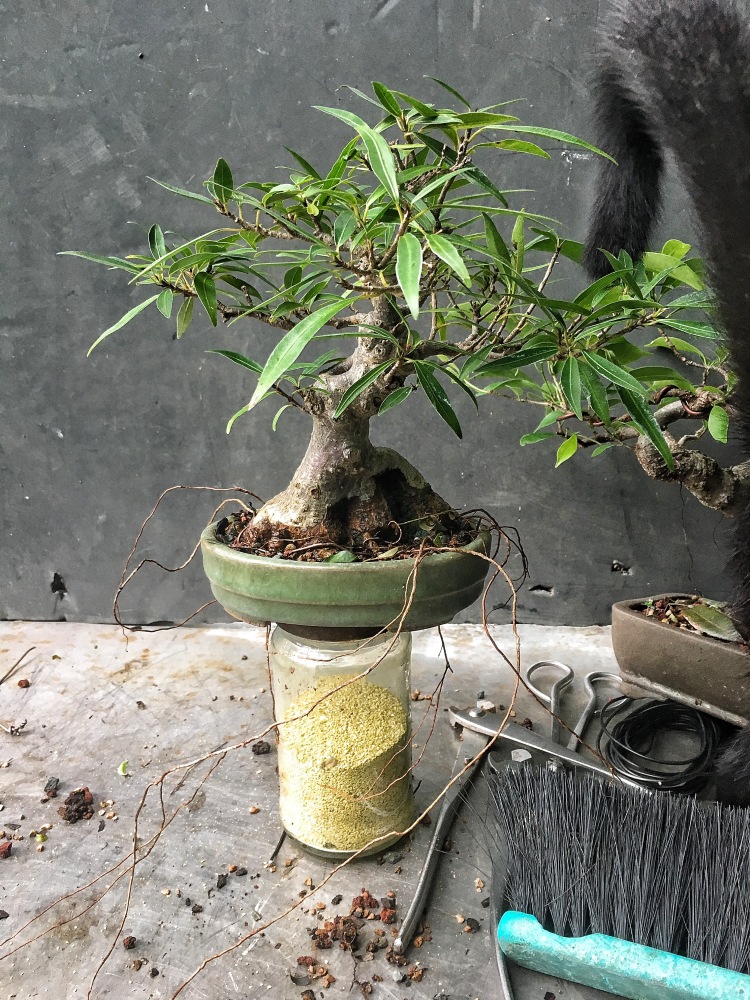 But I think it’s a little too small.

It could use some root work. 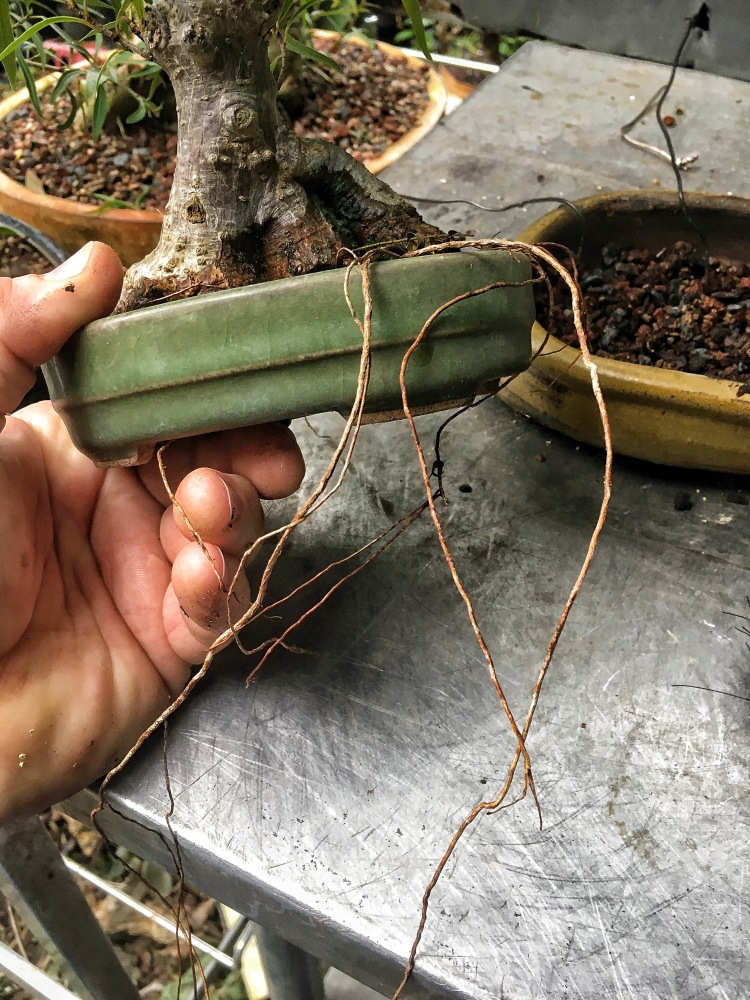 But not this pot. 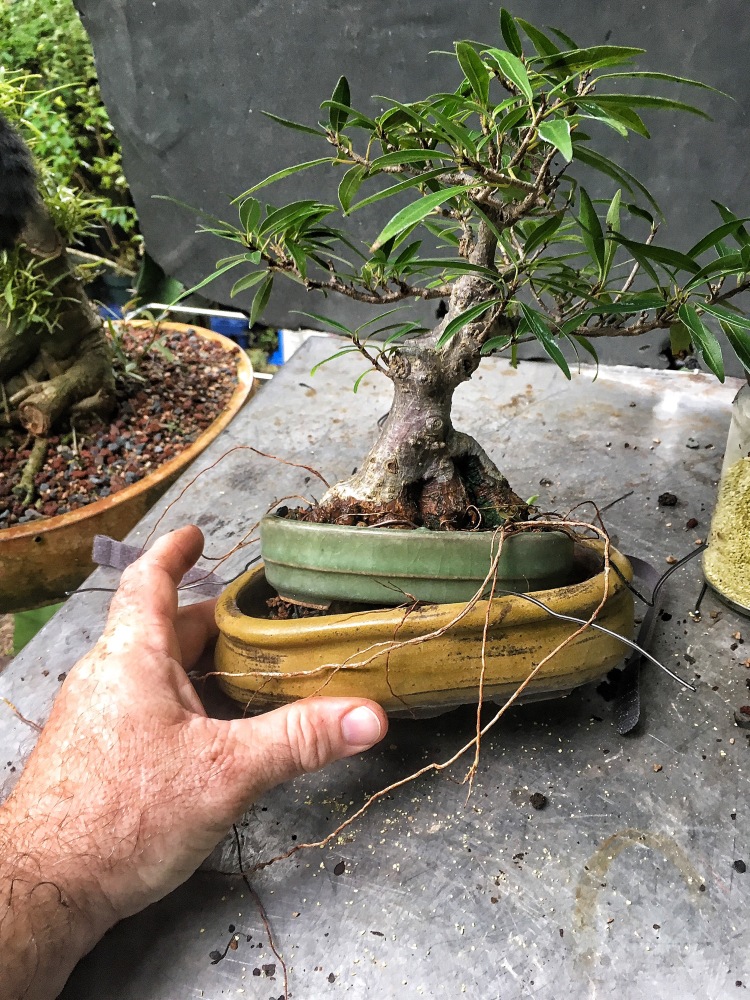 One more tree to try. A ficus microcarpa. And my kitten Salem. He’s supposed to be inside the house, he’s still too small to take care of himself, naughty kitten. 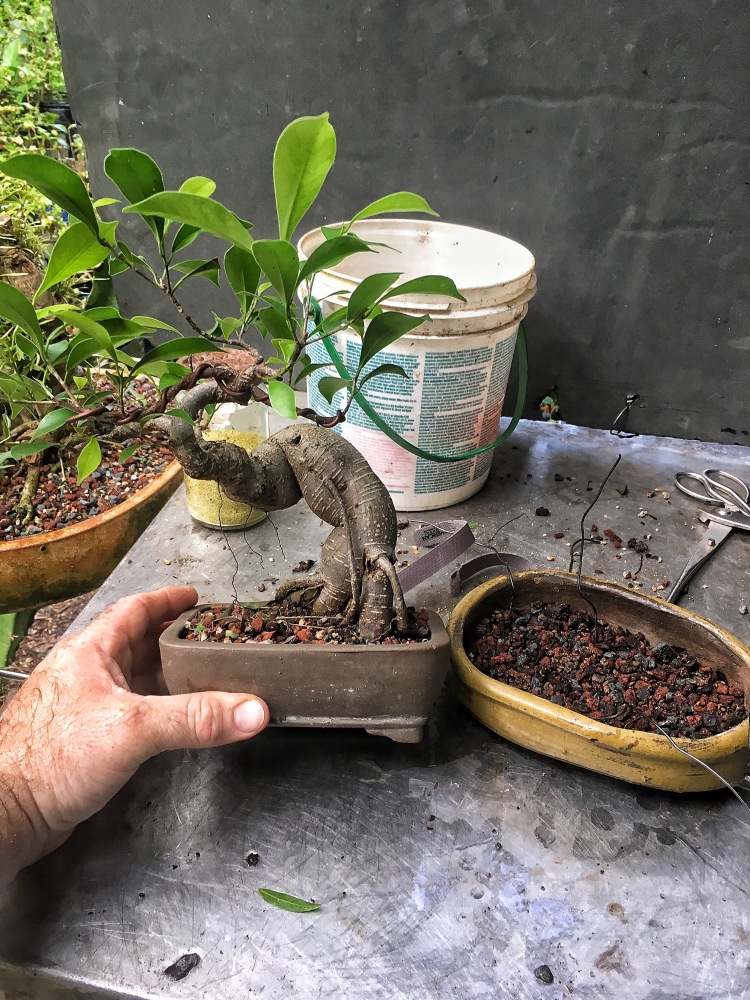 But first, some wiring and developmental pruning.

There’s just one wire that needs to come off.

I’m going to remove the damaged and old, interior leaves. 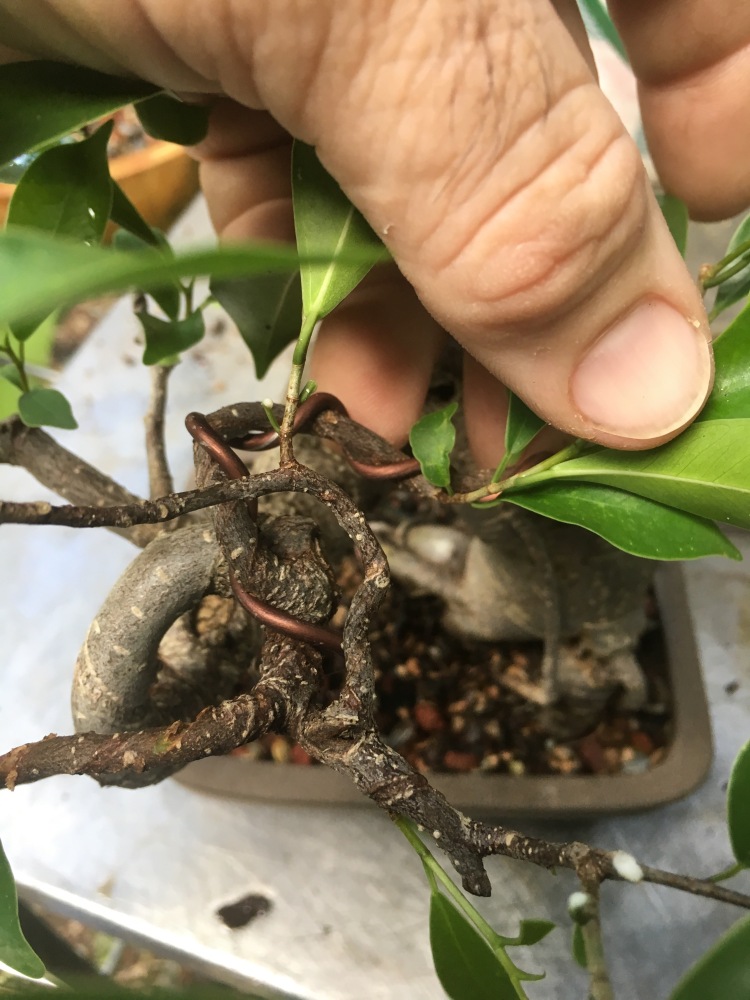 I’m keeping the last leaf and the terminal buds intact. This will channel growth to the tips, to elongate and, therefore, thicken the branches. 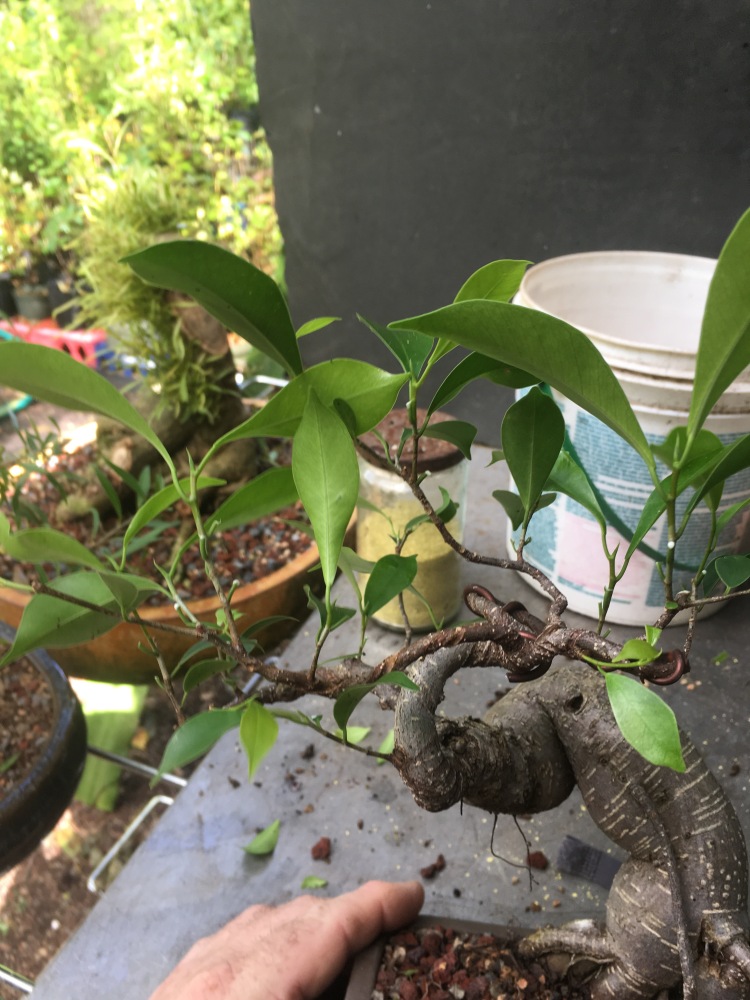 And then some wire.

It looks a little weird and it seems counter intuitive to just leave the end growth intact, but we are using the trees own hormones to direct growth.

Now for the new pot.

I normally wouldn’t do this at this time (it’s late October in Florida) but I’m not touching the roots at all. And it’s a ficus. 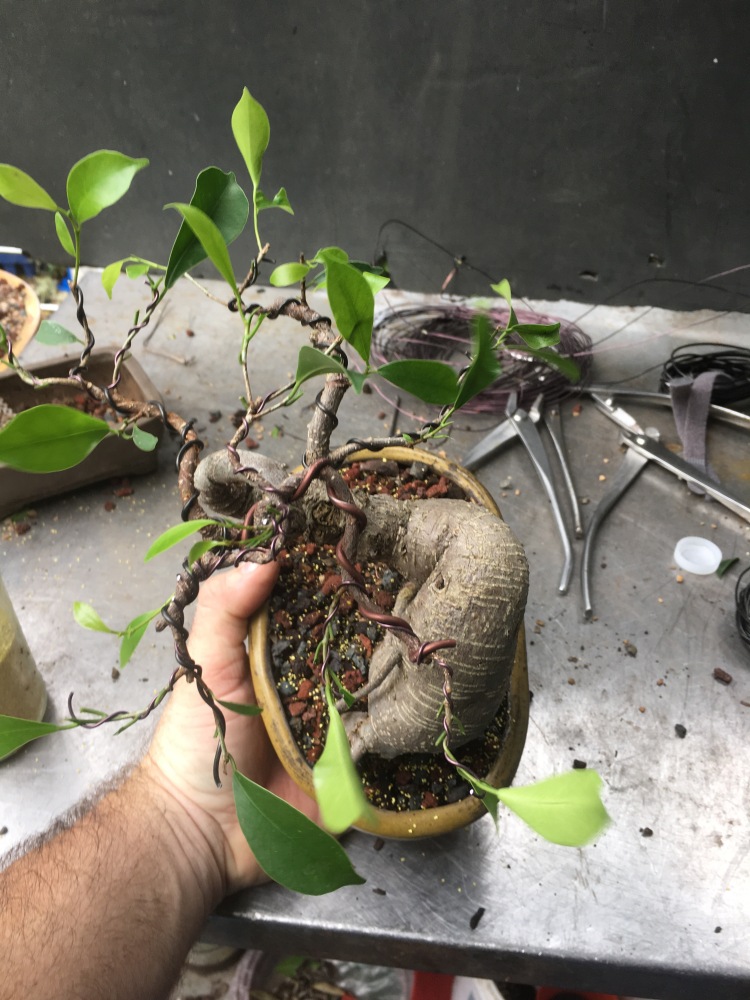 I turned the pot around too. It looks good in there. 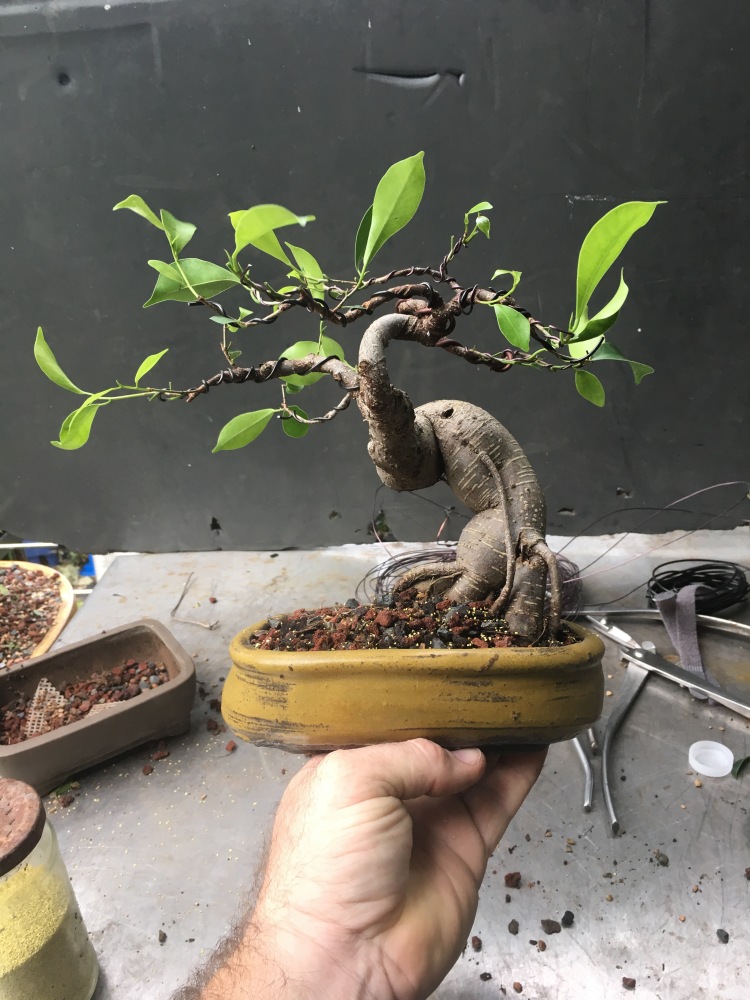 And give a thought to our fallen yaupon holly.

Let’s remember him in his glory. I should have used this display at the convention.