You might remember this tree, its was featured in the epic, groundbreaking and  confirmationally biased blogpost, ” I use some fancy words to justify my defoliation habit, go figure“.

Now, I know what you’re saying, I’ve heard it before. You’re saying “You’ve gone and done it now Wonka!”

“You’ve ruined your watershed!”…… I mean “You’ve let the wire dig into the branch, ruining it!”

Nah! Think about this, that branch will be 2 to 3 times thicker than it is now in a few years. The wire marks will. E long gone before I show the tree in an exhibit.  All I’ve done is caused some gnarliness. Rest easy, keep the emails to a minimum. It’s not the end of the world.  It’ll be okay, my dear friends, it’s a ficus.

The leaf color is something to look at though. There’s a bit of mottling, but I believe the worst looking ones are just last years leaves. Leaves get old and fall off. No worries there.

Though there might be a bit of thrip damage. I have something for that later. Let’s get to the meat of the blog post, developing the tree.

I’ve let the branches grow out since last you saw it:

So now it’s time to cut the tips and encourage back budding (don’t make me repeat myself about those hormones, you know, the auxins and the cytokinins and all that, it’s all in the above linked blogpost).

As I prune, on this fig, the microcarpa, I like to leave at least one or two leaves.

Like here: I’d prefer to prune back to where my middle finger is pointing (yeah, take that!)

But it’s very likely to abort that branch altogether. Not sure why, most of the microcarpa varieties back bud amazingly, but the specie doesn’t. 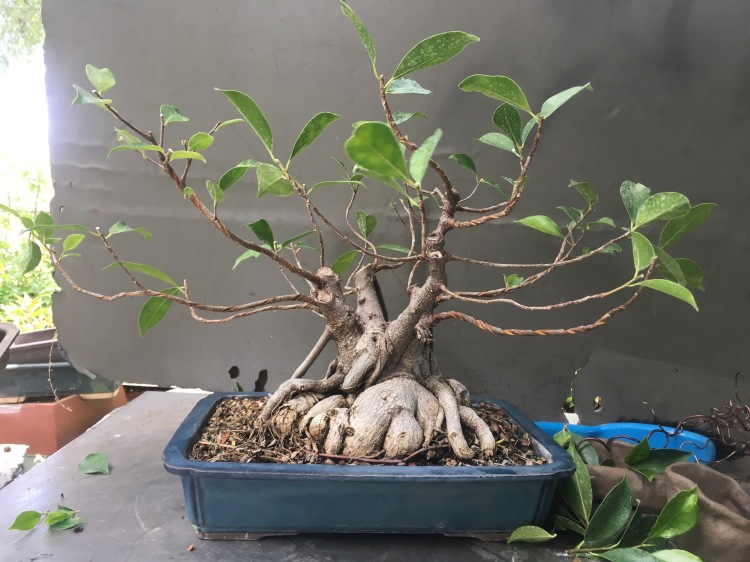 To the pruning, right?

The above branch has been the strongest on the whole tree. In the previous blogpost, it was the only one I cut the growing tips on.

In this case I’m not going to rewire again until maybe June. Which means it’s a good time for some synthetic fertilizer……

I call this radioactive blue. Let’s do a short lesson on fertilizer, ok?

There are two basic forms: granular and liquid. That’s pretty self explanatory. Granular goes on or in the soil and the idea is to provide nutrients every time you water and stays there for several months.

Liquid is applied to the leaves and soil and is absorbed by the tree as you apply it. You might get some residual nutrients if your soil has a decent cation exchange capacity, such as a clay or organic based mix, but mostly it drains out of the bottom of the pot.

Then there are two kinds, organic and synthetic. What’s the difference? It’s easy too, because nitrogen is nitrogen, potassium is potassium etc. The difference is in the action of delivery.

Synthetic fertilizers have all the nutrients available immediately for the plant to use, in a form they can use. They work. Sometimes too well. If I have a tree in a bonsai pot with synthetics, and every branch is wired and I forget about it, I might have really ruined the branches because those wires could possibly be permanently embedded in them. I have some trees like that.

Organic fertilizers have nitrogen and all that too, but it’s usually in a form that needs to be processed, usually by microorganisms like fungus or bacteria, and then the nutrients become available to the plant through some form of symbiosis. This means slower and, sometimes, healthier growth.

All my trees with wire and in bonsai pots get organic fertilizers. I just can’t keep up with the growth when using synthetics. But there is a place for both. Say you need to get some winter growth on a ficus. Use a liquid synthetic foliar spray and you’ll be golden (er…green). Or if a plant is struggling in the summer, use an organic, cake style fertilizer like SumoCakes, with some microorganisms included in the cake itself, and the tree will respond slower but stronger.

But enough on that for now, I’ll be writing a more in depth article on ferts soon, delving into ph, uptake, action and reaction etc. I can’t wait……..it’ll be as fun writing that as my first soil post.

I’m also putting down a granular systemic imidacloprid treatment for that thrip control.

I prefer granular because spraying is unhealthy for me and other things, like lady bugs or bees. The first time I used a spray I remember being all shaky and trembly, but not in a good way. Not a good time (it could be said that if one remembers a good time it really wasn’t a good time…..)

I chopstick it all into the soil because, really,  who wants to look at all those radioactive blue granules? They look like Nerds candy.

The chopsticking also helps to aerate the soil if it’s compacted at all.

Tell me now, between the two of us, you gotta admit it. You like that fat bottom, don’t you. 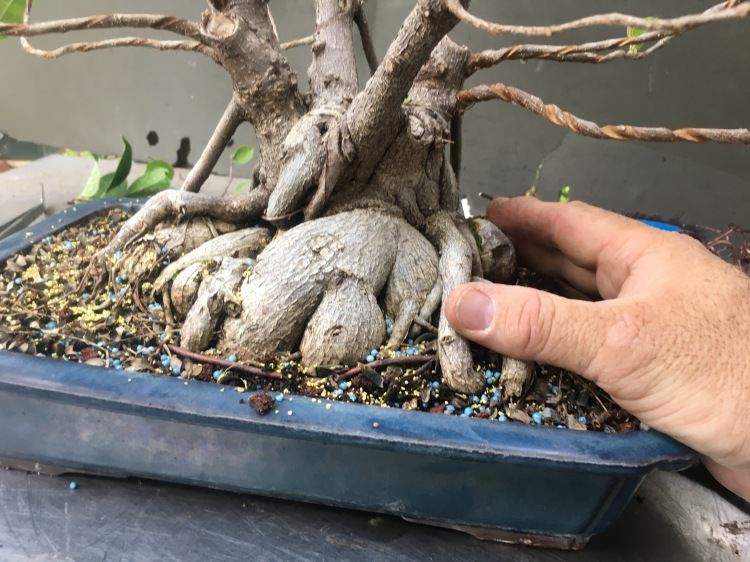 Makes you want to touch it…… 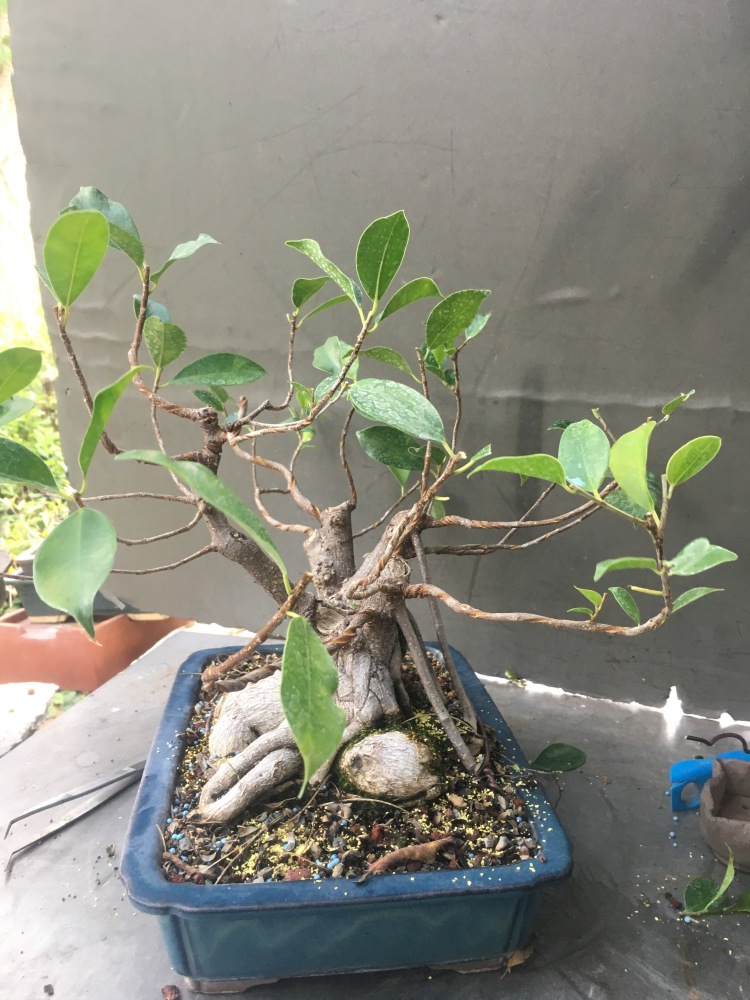 No wire, but lots of water, sun.

I will update you in about a month, after I get back from Louisiana probably. 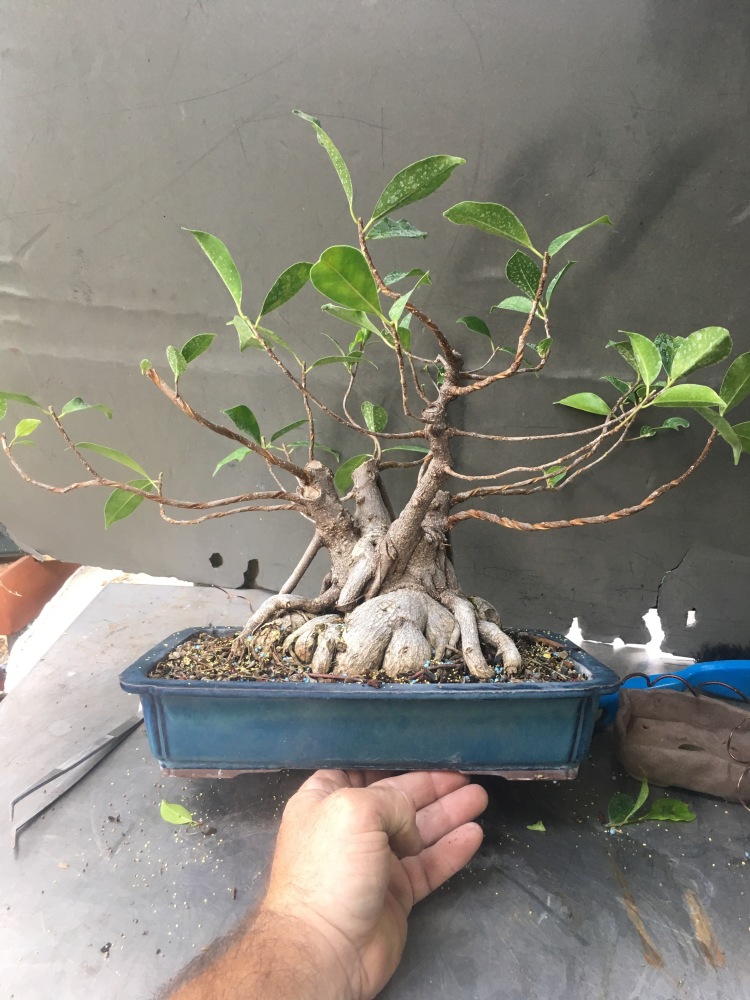 I’ll be in Lake Charles for the Louisiana Day of Bonsai on June 24. Should be a blast, come out and see me, I’ll be the one dressed in black. I’m also doing private sessions for those who are between Orlando and Lake Charles Louisiana.