Here I sit again, in the back of my PT Loser, waiting on my spawn.

And, of course, I have a tree to play with. This time, it’s a ficus microcarpa “green island”.

You missed the good parts though, I’ve cut some leaves, some grow tips. I’ve removed the wire too.

It needed it, it’s in a development stage, after all.

Contrary to common teaching, these scars are necessary and they will grow out. Well, they’re not, per se, needed but the branch generally will pop back up after wire removal, if they don’t scar, on a ficus, as scarring is the result of the branch growing and the purpose of wiring is to make the branch stay were we place it, and that happens when the branch…grows new material. Those that say otherwise are either not long enough into growing ficus or are trained in non tropical species and think that they can apply that knowledge to figs.

Speaking of fig knowledge, let me share, free of charge, some techniques that’ll get you through the day.

Or at least some bonsai tree workshops.

First, let’s talk about the concept of balancing energy in a tree. It’s very popular now to talk about it. When we say energy, we really are talking about sugars and carbohydrates that the tree creates through photosynthesis. This is how a tree feeds itself. No amount of fertilizer “feeds” a tree, regardless of what those advertisements and some bonsai-ists all say. A tree feeds itself through a chemical reaction between sunlight, carbon dioxide, and water (ok, those nutrients in fertilizer do have a role, but it’s only in the facilitation of the processes). This where the “energy” is catalyzed.

The energy (as carbohydrate) is stored in the living xylem (the living wood in the trunk, branches and roots). Therefore, the energy is present in the entire tree, not segregated in roots or growing tips, as has been posited recently. Any branch, root, and trunk pruning diminishes the amount of stored energy available for a tree.

This is where it gets tricky, you see, the idea of “balancing” is valid, but it’s not energy we are balancing, but the hormones that regulate growth. We have auxins, cytokinins, gibberilins, and ethylene gas. Those are the more known ones, with auxin being the most dominant. But, when we prune, it’s not enough to say “by cutting this, hormone X does that”. It’s more correct to say “by cutting this, the absence of hormone X causes this hormone Y to become dominant….”

Like I said, it’s tricky. Let’s use the a juniper as an example. It is correct information to say that we shouldn’t be pinching all the growing tips because it weakens the juniper. We should be proactively cutting back some grow tips while preserving those lower on the branch: See this link, Mike revolutionized the treatment and care of junipers with that article (so much so that there are those who are jealous and try to knock him down. Really. Michaels blog is one of the ones I subscribe to and when I was at an event recently, listening to some guys trying to discredit him, I was annoyed. I just don’t understand the bonsai scene sometimes). And he is correct in the technique, and even the energy production. But it’s the distribution of hormones that is the real reason behind the technique working (also, it takes energy to make auxin and move it to the grow tips, and junipers are not as strong as a ficus when it comes to excessive pruning, but they live in different climes).

Anyway, let’s get back to the Green island fig.

Firstly, on some branches, I’m cutting to a side branch. This is, first, to create taper (going from thick to thin), and second, to cause backbudding. 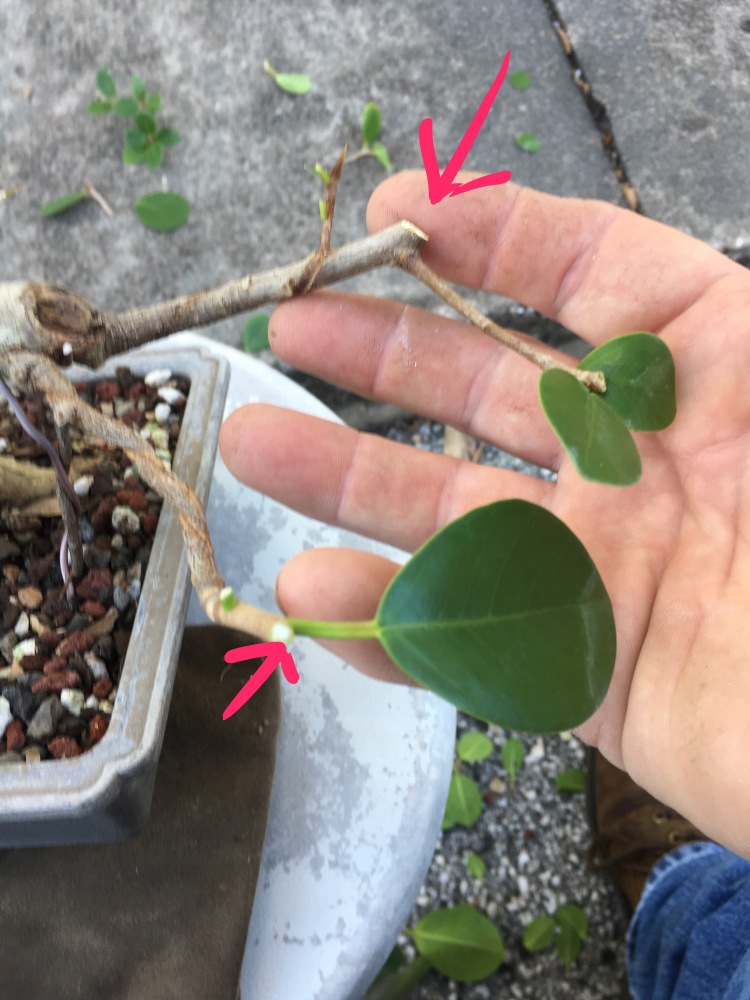 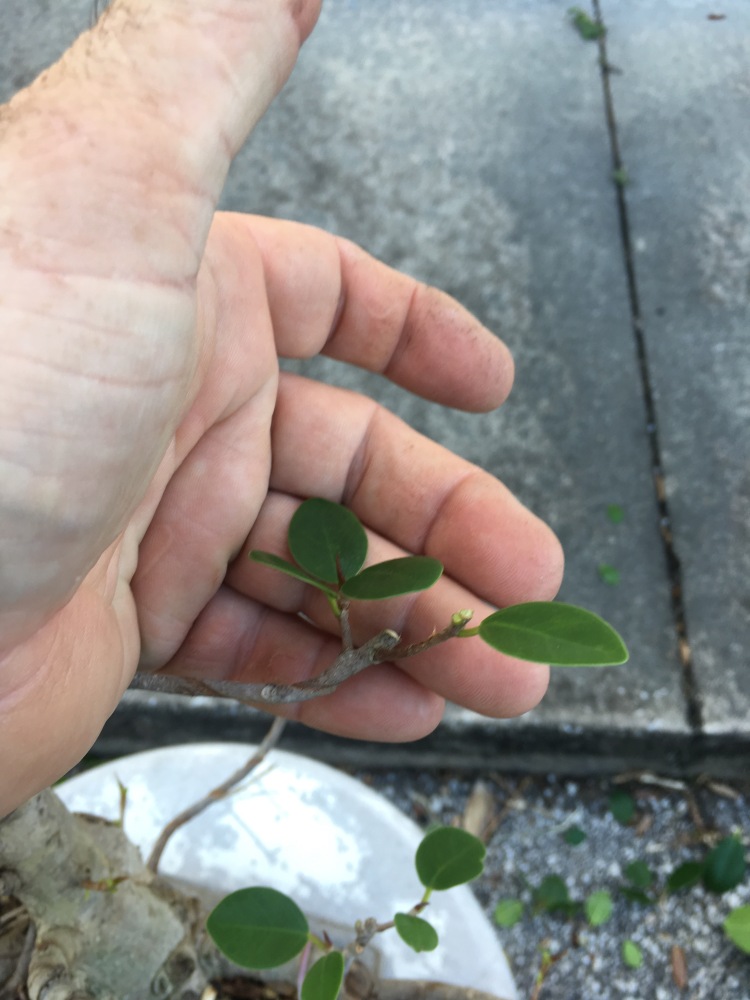 You’ll notice that I leave a leaf (great band name) on those branches where I cut back for taper or backbudding. The reason is that the green island ficus microcarpa (as well as the green mound variety) are not very apically dominant. What that means is that they are more bush like and not tree like (this could explain why most junipers need to be treated the same way, they’re bushes, not trees….hmmmmmnnn) they want to grow sideways, not up. By leaving green, we are giving the branch indication that it is still viable and alive (the cells have within them two genes that are turned on or off, by hormones, so that they will either grow one way or another. Like if it’s cold, it won’t grow or if it’s arid the cell won’t divide. The same cell, but differing actions. Cool, and we just learned of it this year too. It pays to read and continue to learn, ain’t it?).

What I’m trying to say is that, with this type of ficus, if conditions aren’t favorable, the tree will abort the branch and activate the dormant buds at the branch base. No matter how much stored energy it has. A tropical would rather grow all new branches than try to fix old ones. The same with leaves, which is why a ficus dropping leaves is normal (and predictable) and how we can get away with defoliation so often.

Next, on some smaller branches, I defoliated and left the stipule (the growing tip) intact. This concentrates the auxin (the hormone that is responsible for elongation of the branch) at the tip and causes it to grow longer, thicker, faster (sounds like a great movie). 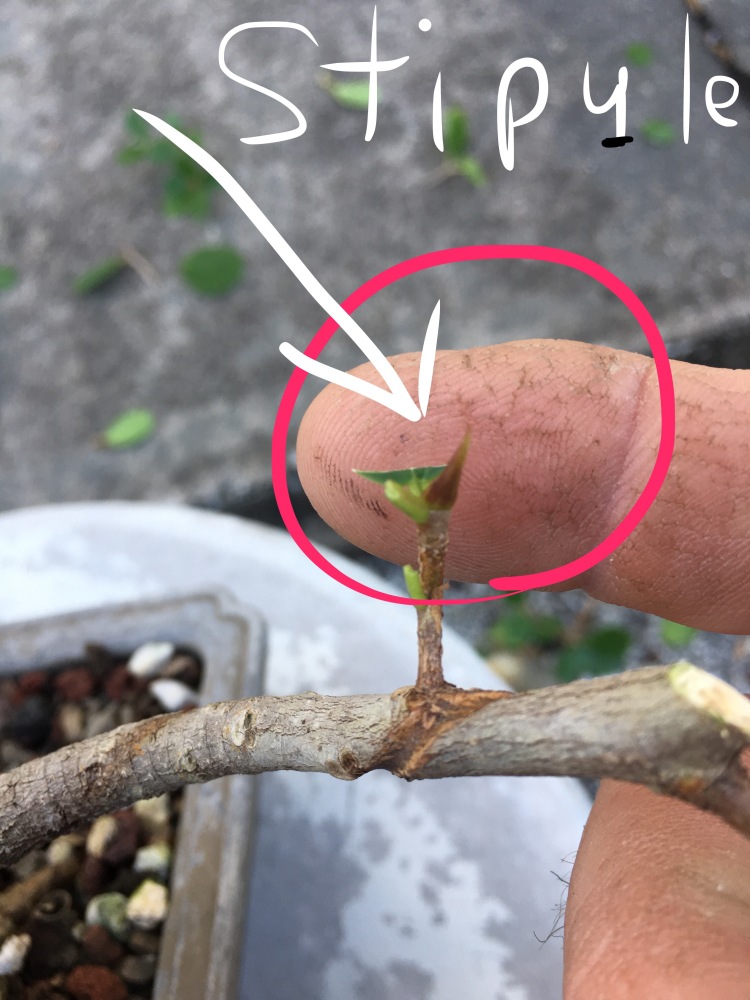 There are a few I did this to.

Well, more than a few.

The defoliated leaves are circled in yellow. I made a mess.

Now, to go back to the earlier statement about green islands being more bush like: for that reason, at this time (November in Florida) I am leaving the top alone.

I want all the growth I can, and the top acts as a siphon, pulling that energy up, on the orders of auxin. I know to leave the top alone because I have killed off the top too many times on a green island by chopping it prematurely (this same thing happens with azaleas, which is why, as I’ve pointed out before, you see many “Bozo the Clown” style azaleas with dead tops and full foliage around the sides). I suppose I could defoliate the top except for the stipules, but it’s not necessary at this time.

And there we have it. One ficus green island-

Ready for some winter growth in sunny Florida.

A little pushing here, some redirection there, free growth on top but regulated growth down bottom. 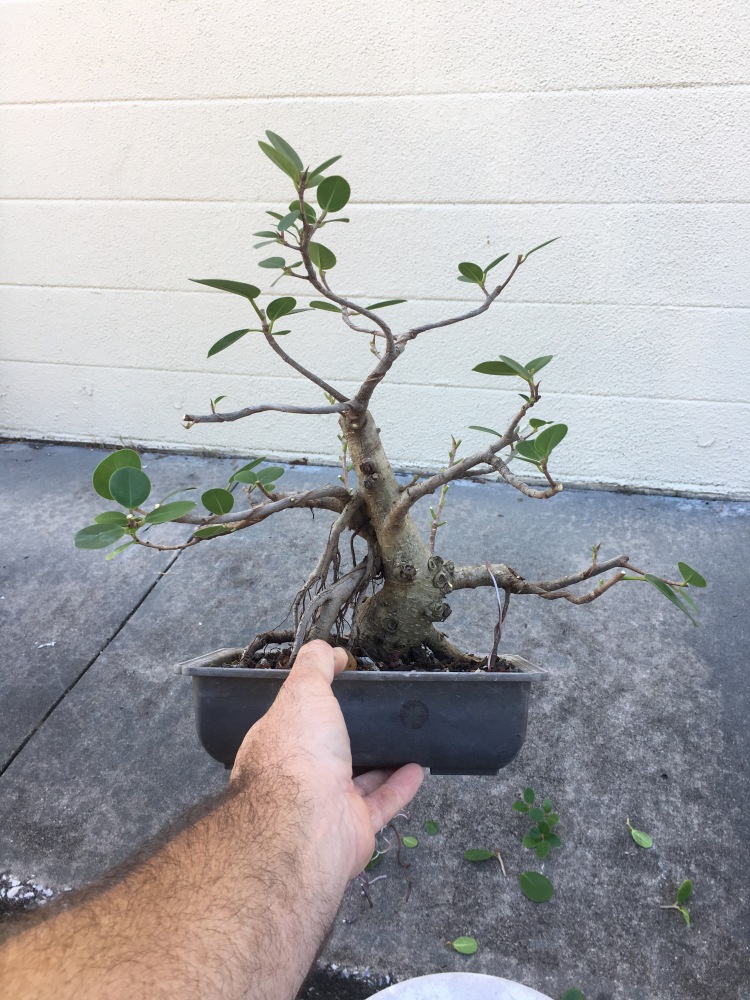 I can’t wait until next year, this will be a cool tree to play with some more.

Before I go, I have entered into a partnership with The Bonsai Supply, and they are offering an exclusive, adamaskwhy.com 20% discount for Black Friday, Shop Small Saturday, and Cyber Monday, on their pots, soil, tools, etc., to my blog readers, Instagram followers and Facebook friends. The code is valid from November 24-27th. To take advantage of it, go here https://thebonsaisupply.com/discount/ADAM20

The next post, we will play with another green island, and I’ll show you the difference between it and the green mound. 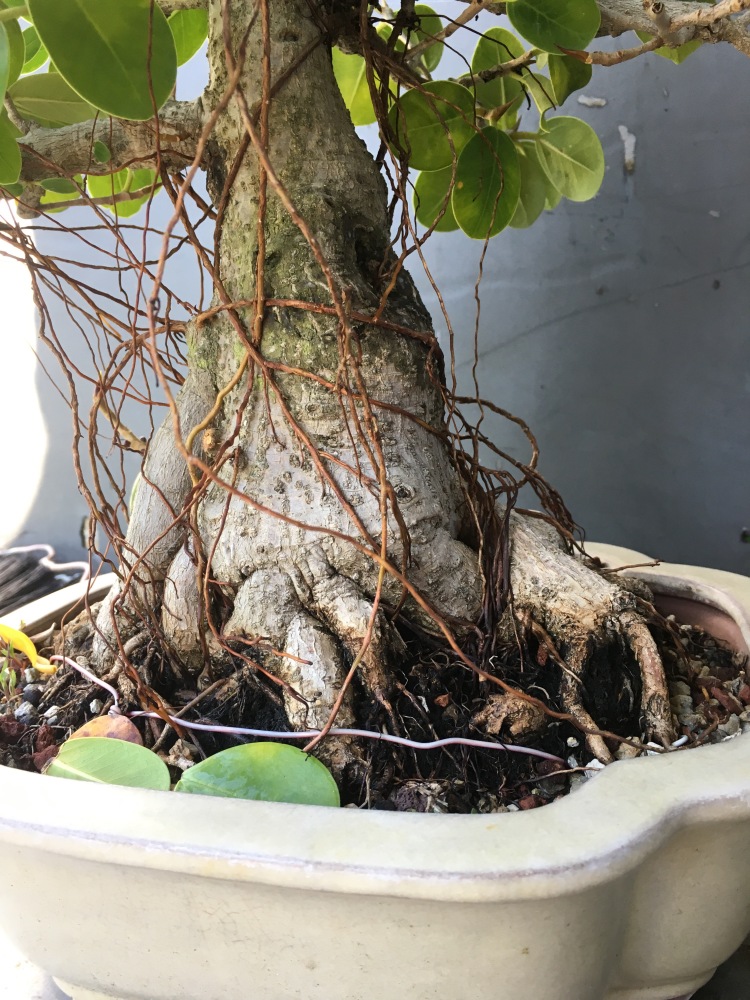