The first styling of a potential bonsai is, to me, one of the most exciting times in a tree’s life. The future is still foggy, but the path has been chosen. Let’s wax philosophic as we chop up this poor bougainvillea.

The tree came from the Central Florida Bonsai Club’s raffle table at the last Holiday Party. I think it was donated by one of my favorite people, Cosette.

Let me tell you a story:

I’m sure you are all aware of the Great Renaissance artist, Michelangelo. His full name was Michelangelo di Lodovico Buonarroti Simoni, but his skill and fame as an artist has made history remember him by just his first name.

He is considered to be the penultimate “Renaissance Man”, meaning he could do everything; draw, paint, compose poetry. He was an architect as well, with his work on St. Peter’s Basilica, the largest Catholic Church in the world and generally regarded as the best example of Renaissance architecture. He is the artist of the second most recognizable painting (the Mona Lisa being the first) in the western world, this part of the Sistine Chapel called “The Creation of Adam”

But he considered himself a sculptor first. His work “David” is, arguably, the most famous sculpture from the Renaissance.

A famous quote from Michelangelo, in regards to sculpting,

Every block of stone has a statue inside it and it is the task of the sculptor to discover it.

This quote is important because the block of marble that David was sculpted out of was chosen, but then discarded, by two other sculptors, who considered the block to be flawed.

Michelangelo also considered sculpture to be the pinnacle of the arts, even thinking painting was common and beneath him (surprisingly, considering his Sistine Chapel work).

I have said that bonsai is the ultimate Art. But I’m no Michelangelo, even though I believe that every tree has a good bonsai in it, and it’s our job as bonsai artists to free it.

Bringing us back to our tree.

It’s kinda ugly. You may think it has an interesting trunk, but you’ll see in a minute, why most bonsai artists would dismiss it. 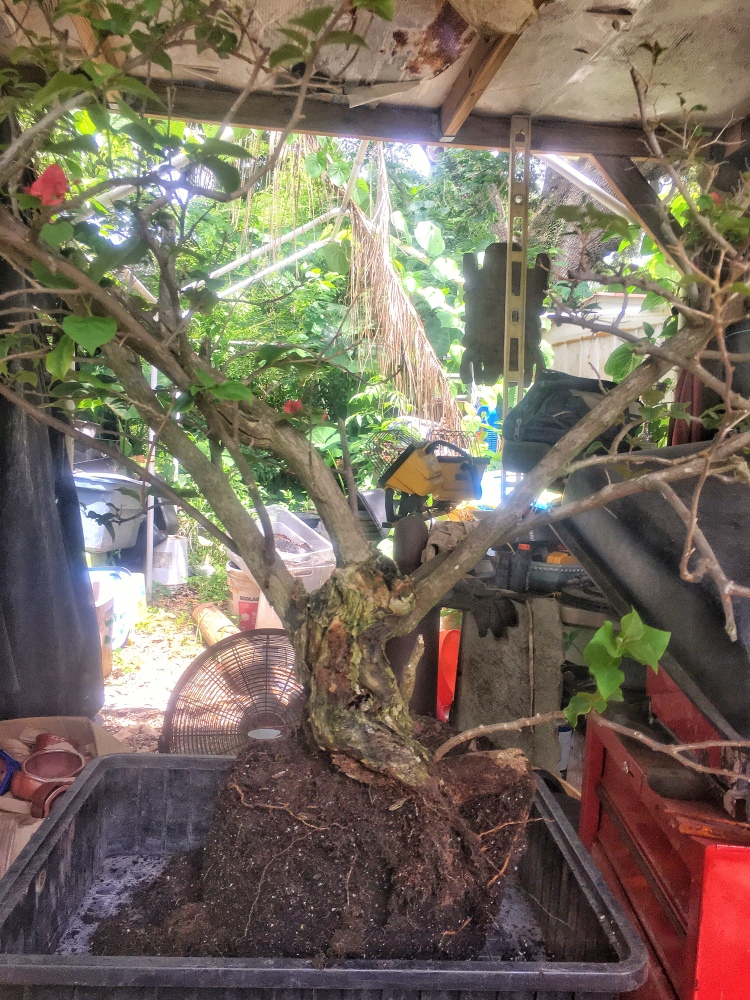 It has amazingly straight branches, with no taper as well. One could readily fabricate a broom out of this one, to sweep up The Nook. 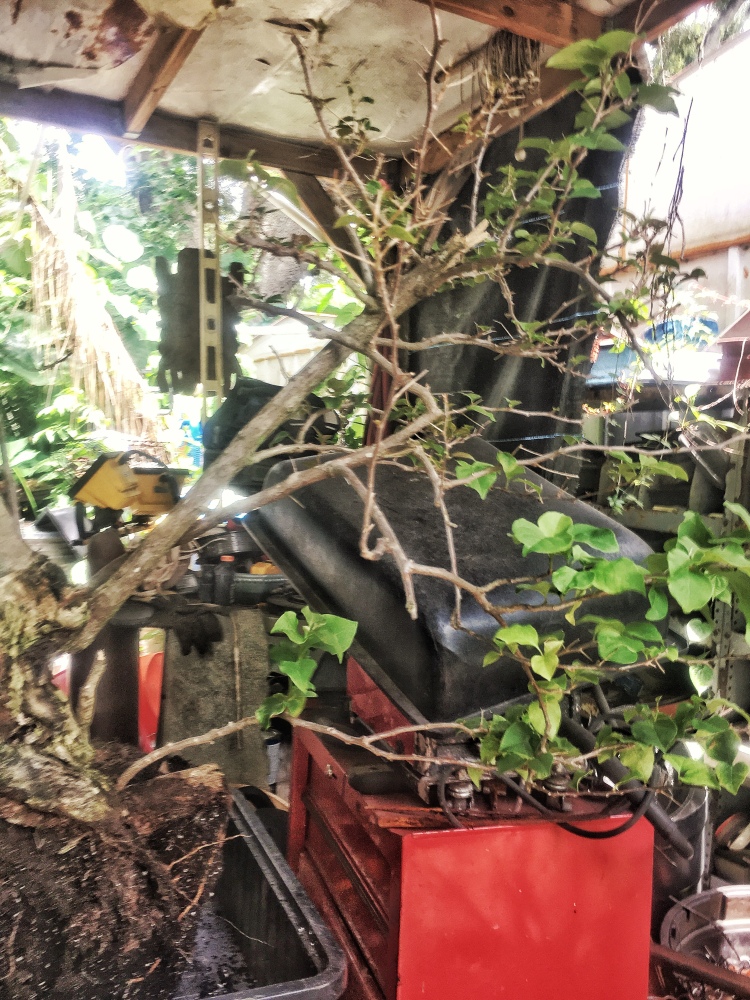 The roots are not bad. Not too good either. You need to dig to see them though.

Though they are hardly “even and radiating from the trunk” as is dogma. They are, however, gnarly. That makes up for something.

What is the one fatal flaw that most bonsai artists will use to dismiss the tree? 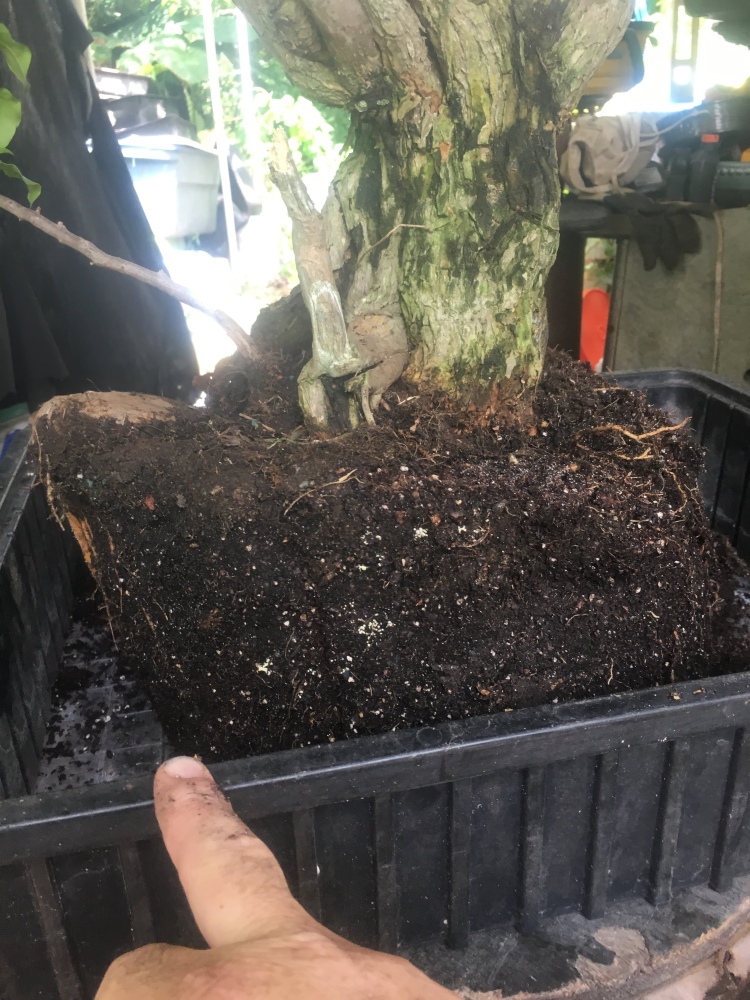 And on this bougie, the whole front is dead.

Of course, if you’ve been paying attention, you can probably guess that I’m not one of those who think that a rotten trunk is a flaw.

I, being a carver and familiar with Dan Robinson’s creed that “all trees deserve deadwood” believe that this is the best feature of the tree. 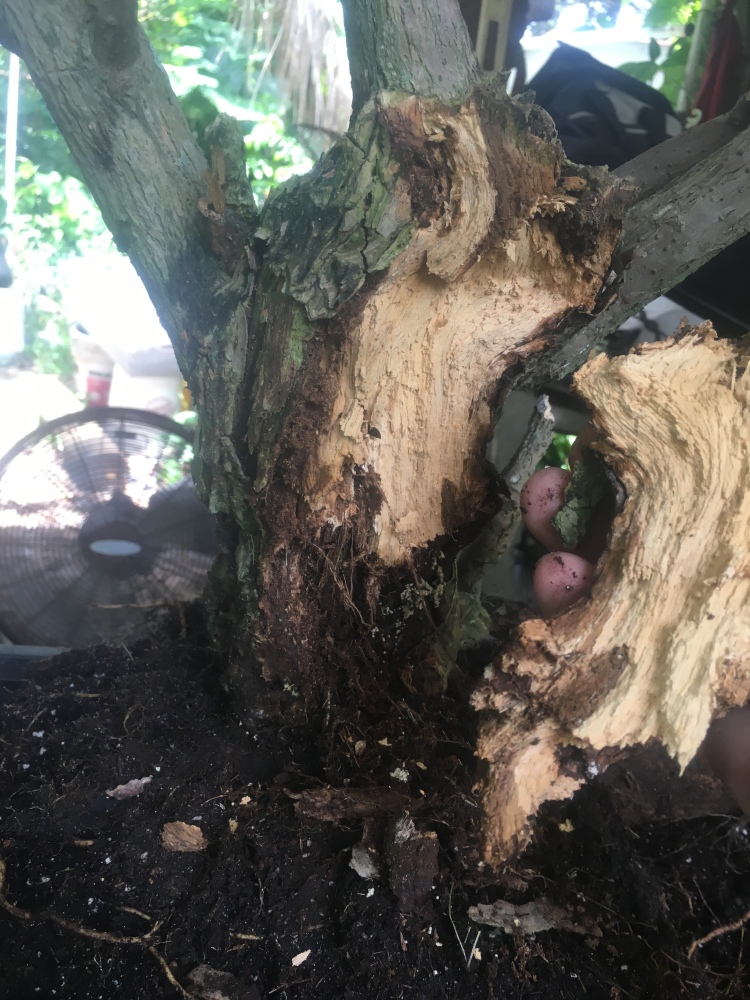 At this point y’all are thinking it’s time for my die grinder, or maybe the Dremel, but no, my go to tool, at least in the beginning, is my trusty ol’ pocket knife.

For a rotten trunk like this, I use it to remove most of the big chunks. 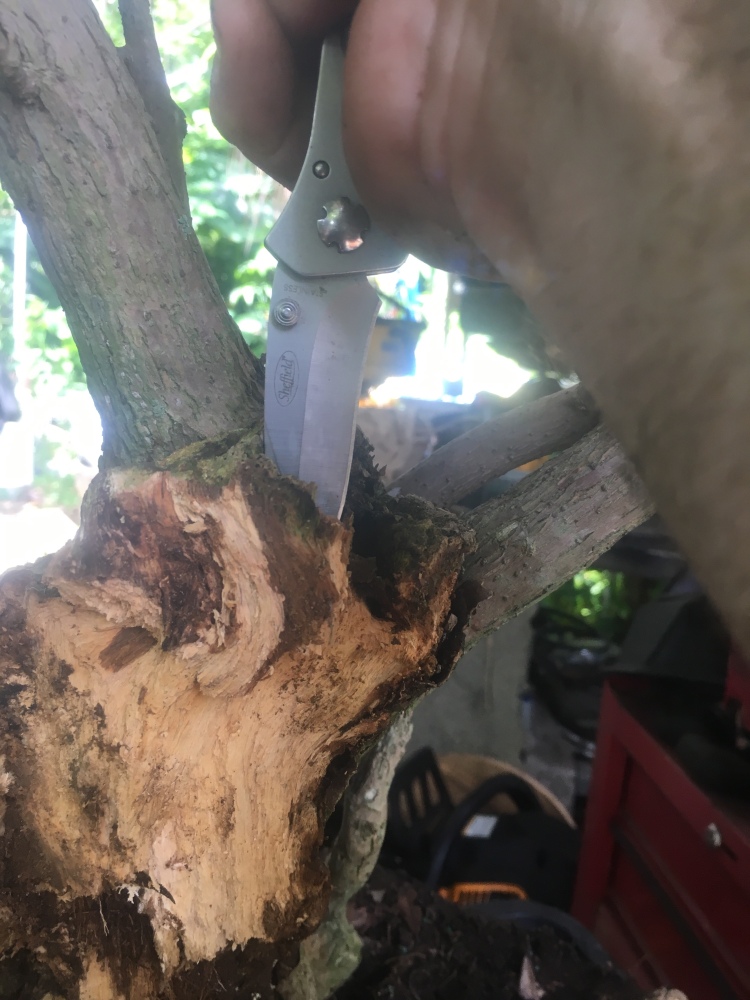 And I use it to define the live vein as well……and to stab, furiously and wantonly, any ants or termites I find.

First rule of sculpture: remove what you don’t need.

The second rule of sculpture, carve shapes, not lines. 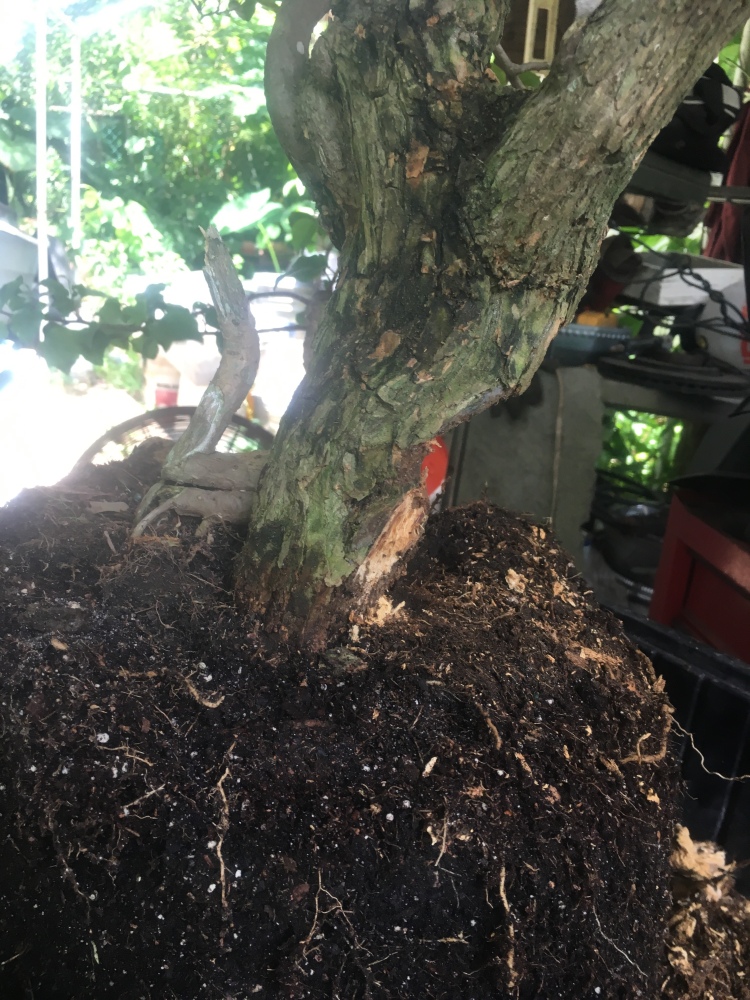 Third rule of sculpture, safety glasses should be the first rule…..

Let’s get rid of the old dirt, shall we? 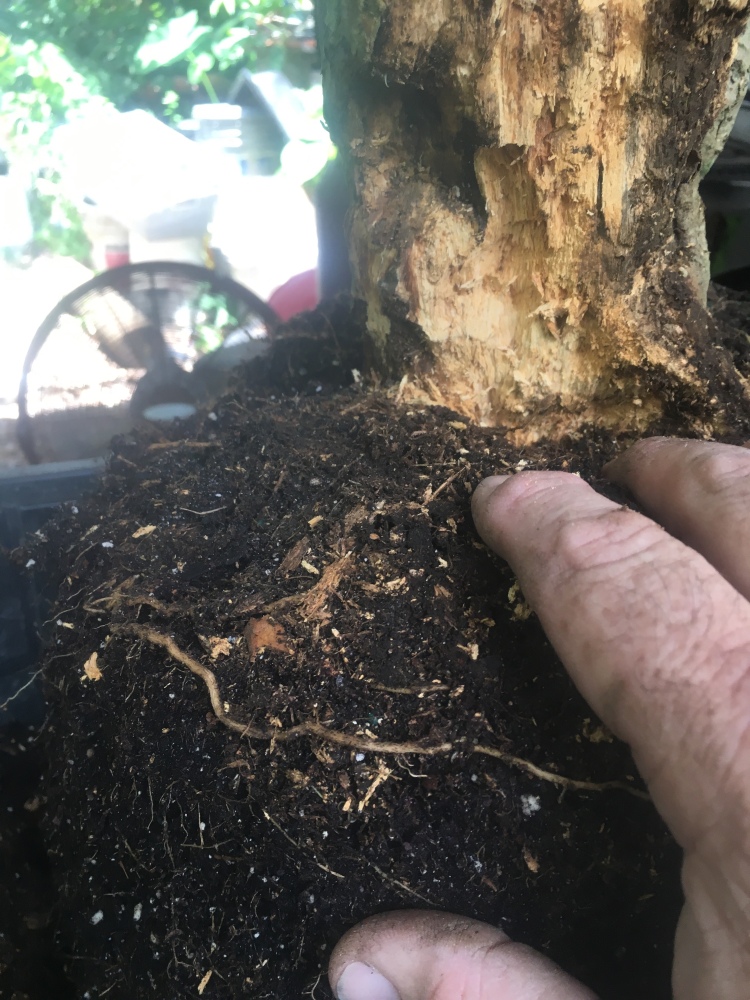 These are surprisingly good roots (for the soil it’s in) for a bougainvillea.

I see the rot does go into the soil line.

I’ll need to clean it all out but first, I need to be able to maneuver the damn thing. 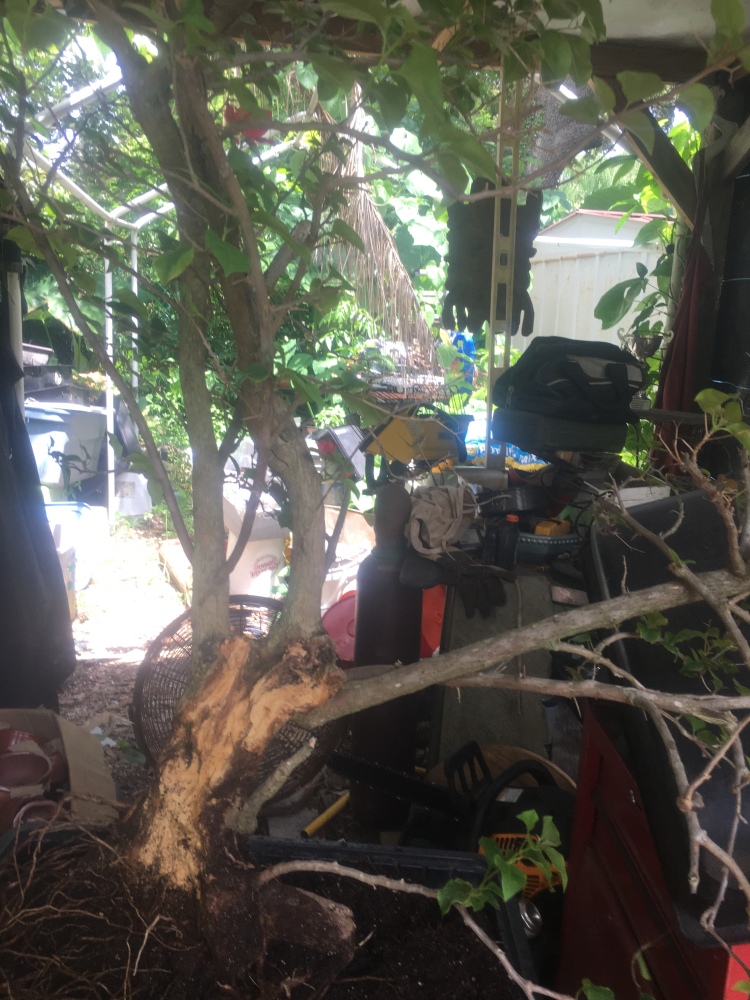 The right tool for the job.

There we go. Almost like I just clipped it’s wings… 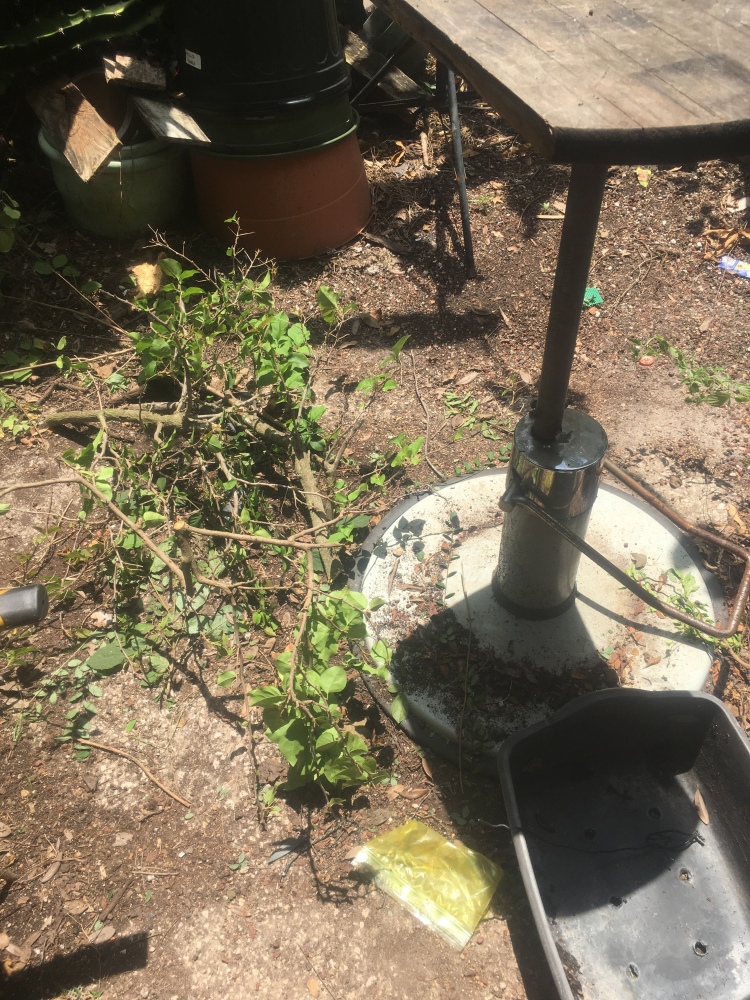 And, as I value my an intact epidermis, the thorns must go away. It doesn’t hurt bougie, or most thorny trees, to de thorn them. 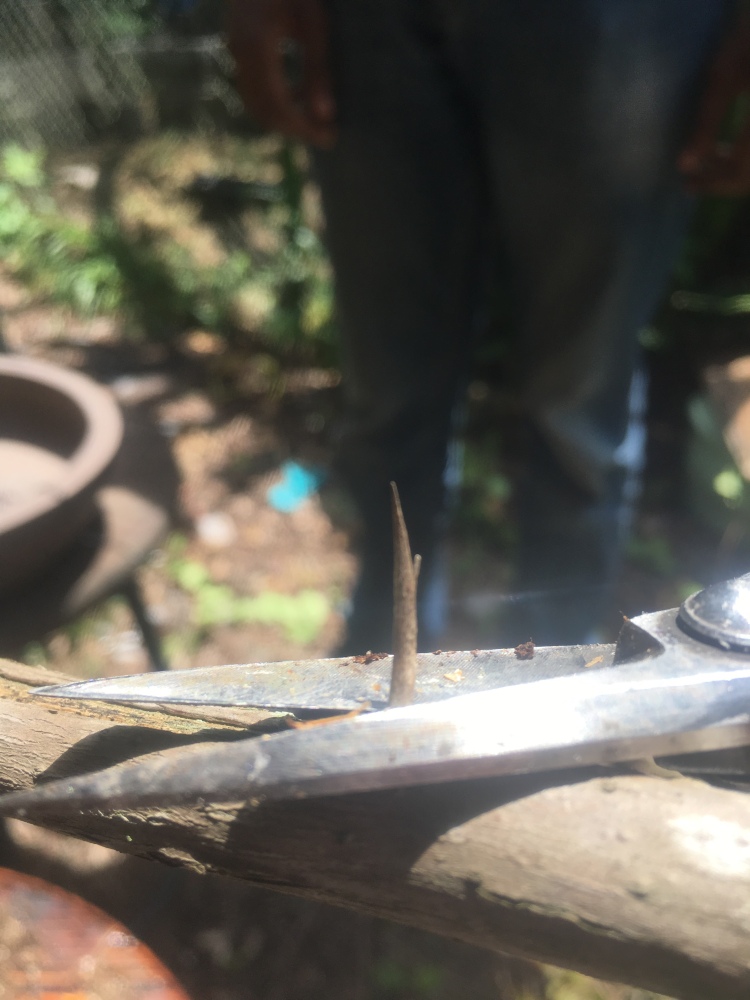 This is a healthy root system on a bougie. Lots of spaghetti roots.

They don’t really make fine roots, the same way say a maple might, so this is what you can expect. I called them spaghetti roots, they are a bit like al dente pasta, flexible but still wanting to snap easily. Much like the buttonwood I worked on recently.

You can cut back the long roots. …. 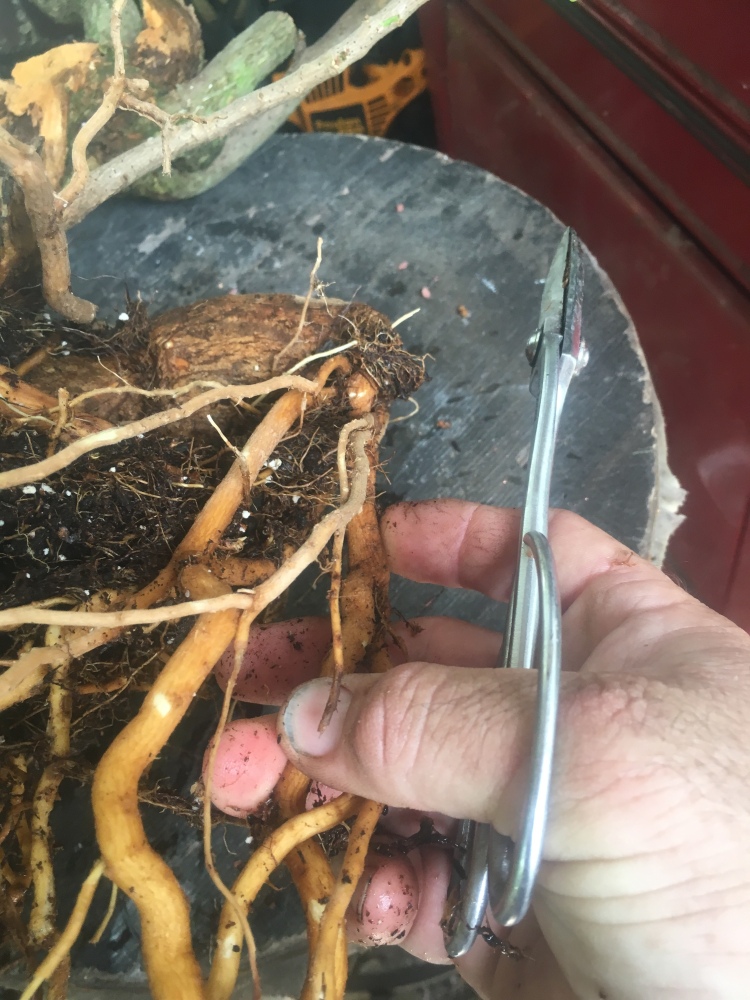 …and they’ll grow new roots from the cut tips. 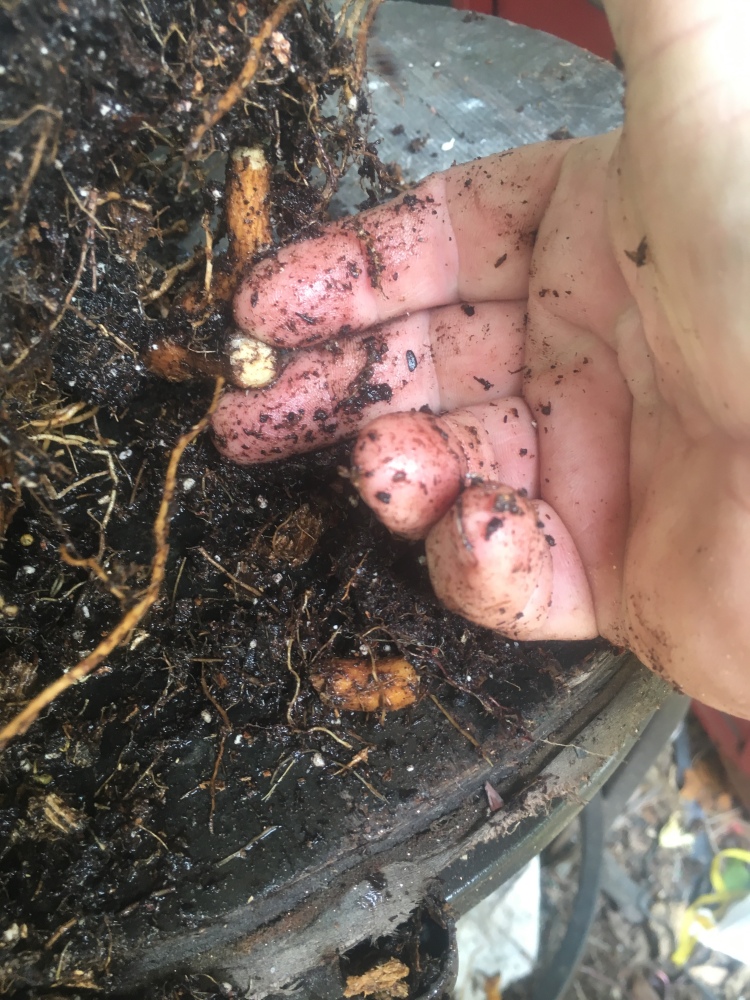 I don’t like to bareroot trees much, but a bougie, in a bonsai pot, needs good draining soil. So I will wash out as much of that old, broken down soil as possible. 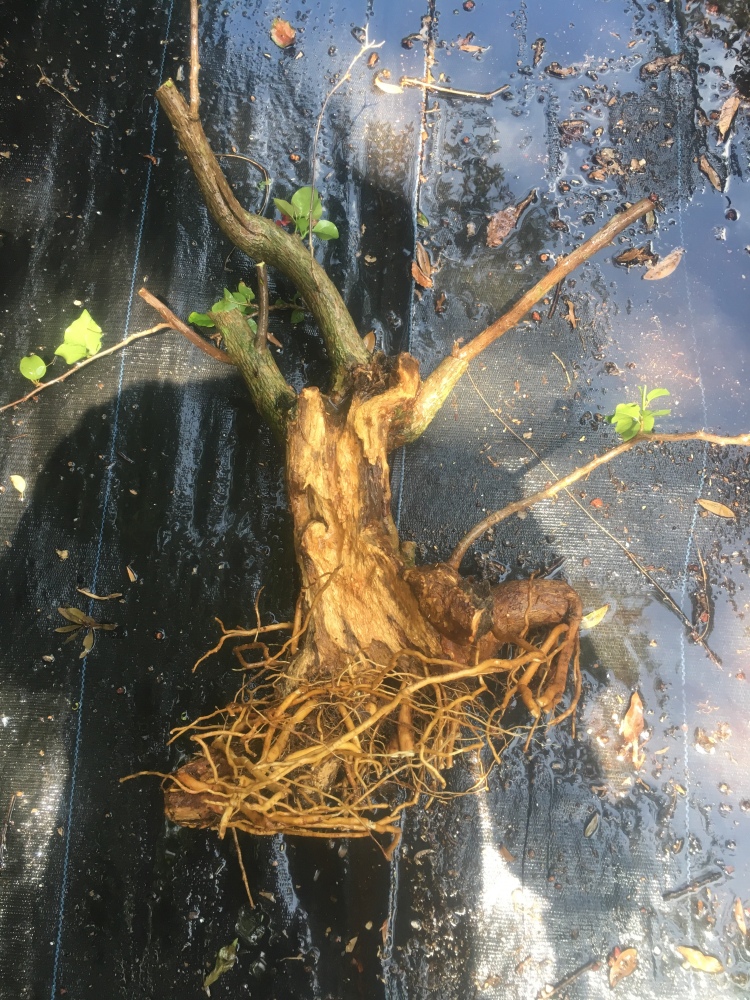 This is the training pot. Good size and most importantly…. 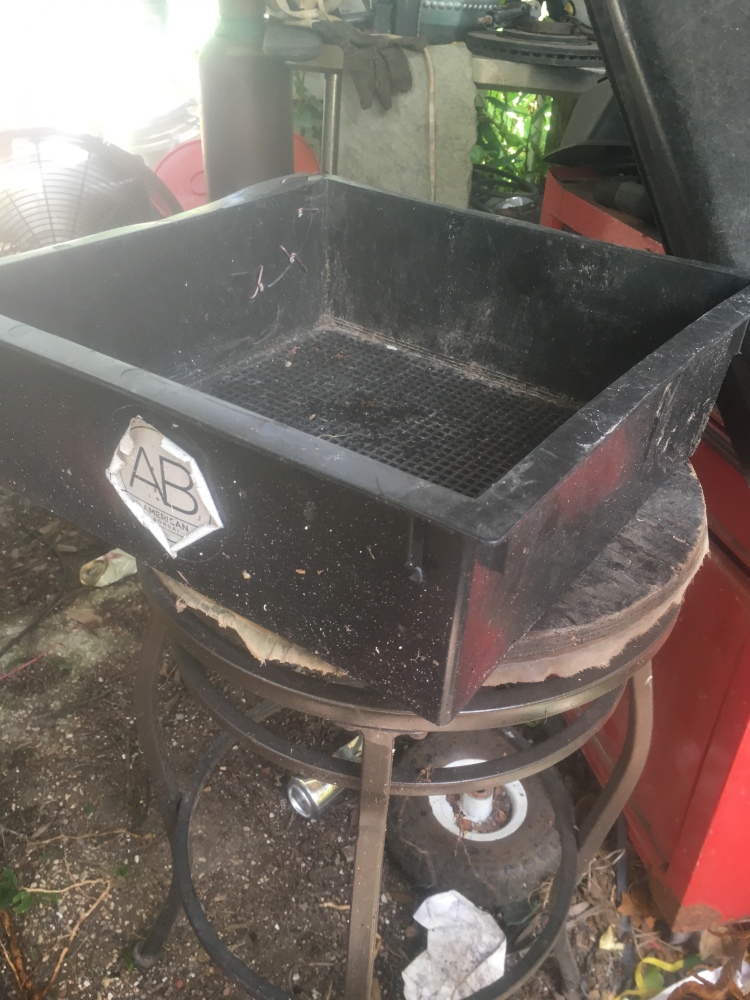 …….the drainage is superior. The whole bottom is holes (funny thought: an object can’t be whole if it has holes……)

All those holes means I can place the tie down wires anywhere to support the tree.

All potted up in my exclusive and trademarked Adamaskwhy SuperMix™️ soil mixture.

The next step is to let it grow. Let’s see what happens now. It’s the trees turn to fly….

Michelangelo called sculpture the “..pinnacle..” of artistic expression. I think he said this because it took a certain skill to not ruin a piece of stone with an errant blow with the hammer and chisel. Very much unlike a painting, which can be endlessly painted over and over, until you get it correct. Further, a sculptor also has to look at the raw material and follow the grain and flow of the material, how it was formed or grown, and be able to pull a form out of the formless. To quote the man himself:

I say that bonsai is the ultimate Art. The trunk is your block of stone, you need to determine its potential. And if you are growing it, that’s what it means to carve. The branches are the canvas to paint, it may take time, but you can regrow them endlessly. Like repainting a nose or a hand so it doesn’t look like a lobster claw.

But all that is dependent on how well you’ve studied the species, it’s growth habit, and be able to predict what’s going to happen.

It’s almost a performance. A dance. You are in a complex slow motion waltz with a tree, a living organism, and if you make a misstep, the tree may die. Many real artists don’t believe that bonsai is “Art” (There are some bonsai practitioners that don’t either, for that matter). They think a tree just grows and that’s not art. But I’ve done it all, pencil, charcoal, wood and stone sculpture, watercolor, oil, acrylic painting, on paper, board, glass, canvas, what have you. I’ve painted portraits, landscapes, abstract, collage. I can draw a portrait, a still life, Spider-Man, Snoopy. All that takes is practice, and applied interest. But you can erase, paint over, start over.

But bonsai, as an art, adds the difficulty of a subject that is ever changing, transient…..fragile. It’s not bonsai if it’s a dead tree, after all. And that’s what makes it the ultimate art, it’s difficulty, it’s transience, and the give and take necessary to making it. You have to surrender the ego to create a bonsai.

Michelangelo used that discarded block of marble the only way he could. The stance, the arms and legs, the direction of David’s gaze, were all dictated by the stone. It was a collaboration between the artist and the marble. He saw David, standing in the field of battle, pensive, a little unsure, just before the clash with Goliath. You can feel the calculation, the trepidation, the tension.

I recently asked, on my social media accounts, what rules the statue of David broke, as a work of art. There were many answers (and way too many comments on his penis….). Many brought up the proportions being wrong (head and hands too big) and those could be considered broken rules. The funniest one was “reverse taper”. But Michelangelo sculpted the piece to be viewed from below, and forced the perspective accordingly. therefore, too large a head (the average human is 5-1/2 heads tall, for reference) is not a broken rule.

The question was a loaded question. You see, there’s this amazingly simple philosophy artists follow: Art doesn’t have rules. There are principles and proportions and concepts and techniques that artists use to convey ideas (a simple example: yellow and blue make green. A more difficult one: the theory of the vanishing point), but the only real rule is this: convey the idea you wish to convey. If the idea is “blue”, make sure your audience understands that your art kinda describes something that makes them think “blue”. If I want to exaggerate a focal point (David’s right hand is actually larger than his left) that is my prerogative as an artist (in David’s right hand is the rock that was the missile, flung from his sling, used to kill Goliath. A deliberate exaggeration to bring notice to the rock).

In bonsai, we are making “….small, young trees look like big, old trees…”, so, therefore, it should, kinda, look like a tree. We exaggerate certain proportions to make a little tree look bigger. A tree in nature has a trunk width to tree height ratio of 12:1. In bonsai, we exaggerate this by using the ratio of 6:1. This makes the trunk look bigger. The more you squash that ratio, the bigger the trunk looks. A sumo style tree, with a 1:1 ratio, looks like a big old fat tree.

For my bougainvillea, the focal point, exaggeration, and “flaw” is the rotten, hollow trunk. 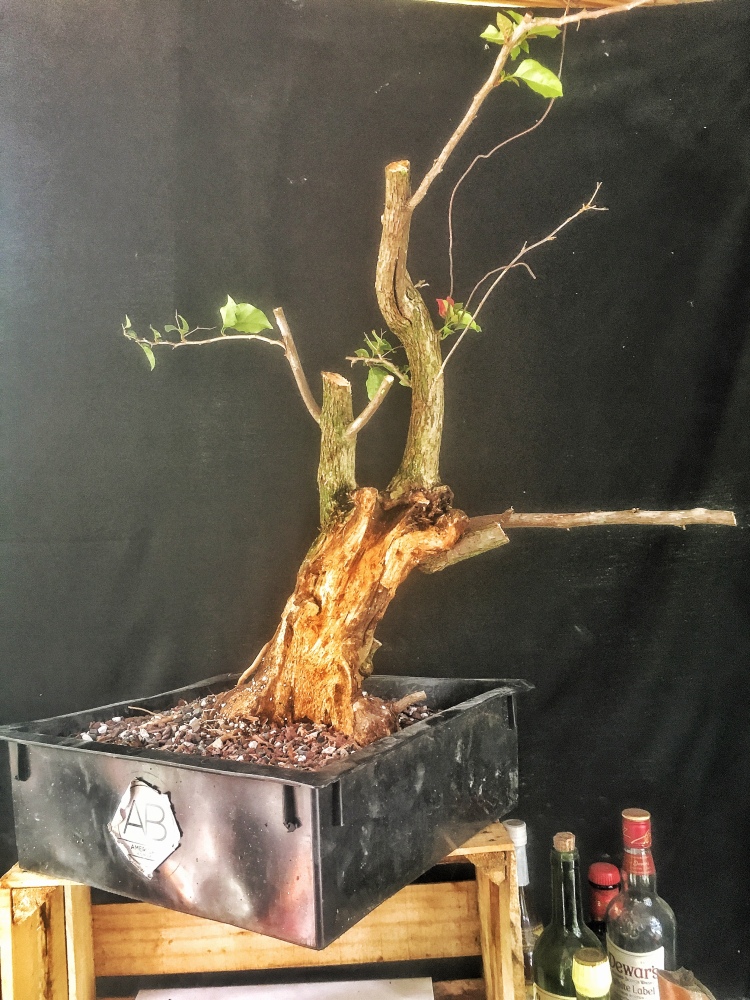 All the rest, the branches, the leaves, the flowers etc, will be in support of that (no one has said anything about David’s kneecap, because it’s perfectly normal. It’s just a kneecap). When you see the tree you’ll say “wow, look at that trunk” or “too bad about the trunk” or “how can a tree still be alive with that trunk” (like I said, people will love the “flaw”, understanding it, or hate it, denouncing it).

What does this all mean?

Embrace the tree you have.

Make the flaws work, and create something new.