Look what I just picked up! It was on the bumper and I reached down and grabbed it and now I’m holding it…….sorry, the jokes don’t get much better today…. 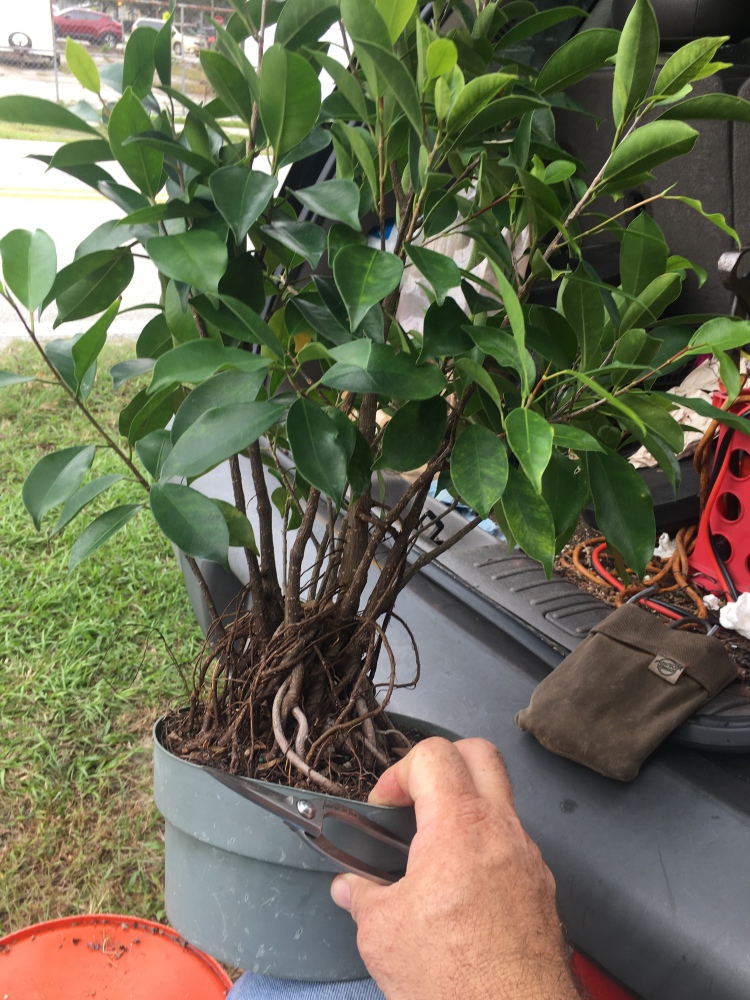 Anyway, it’s a ficus microcarpa (some call it a Cuban laurel fig, which is odd because it’s a Chinese species. Some call it, erroneously, a ficus retusa, which is another ficus altogether that I’ve never seen used in bonsai culture). It was originally sold as a “ginseng ficus”, which is just a marketing name, not a true variety or cultivar. It’s really just a seed grown ficus microcarpa.

The guy I got it from just let it grow. Oh boy did it grow. It almost looks like it grew a fur coat for winter. 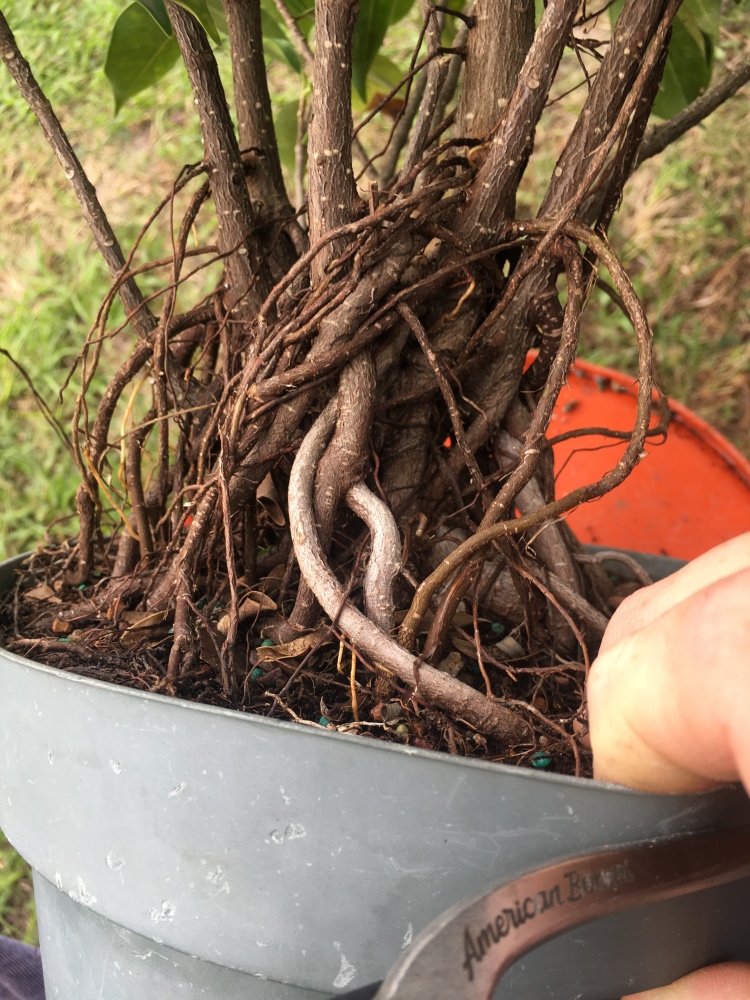 You can just see, right in front of my fingers, what’s left of those bulbous, tuber-like roots that describe a F. microcarpa as a ginseng.

I say “describe” because a “ginseng fig” is not a real thing. It’s a seedling grown ficus microcarpa and that tuber-like trunk is just the raised root system. Much like a caudiciform plant (adeniums, some euphorbia, erythrina) a ficus’ roots are able to swell up to store water and sugars for times of drought and hardship.

This also allows the tree to grow as “stranglers”. Where the seed might have been deposited by a bird or a monkey, way up high in the structure of a tree, and it germinated, starts growing, and throws roots down to the ground. In time, the ficus will throw so many roots down it suffocated the host tree. 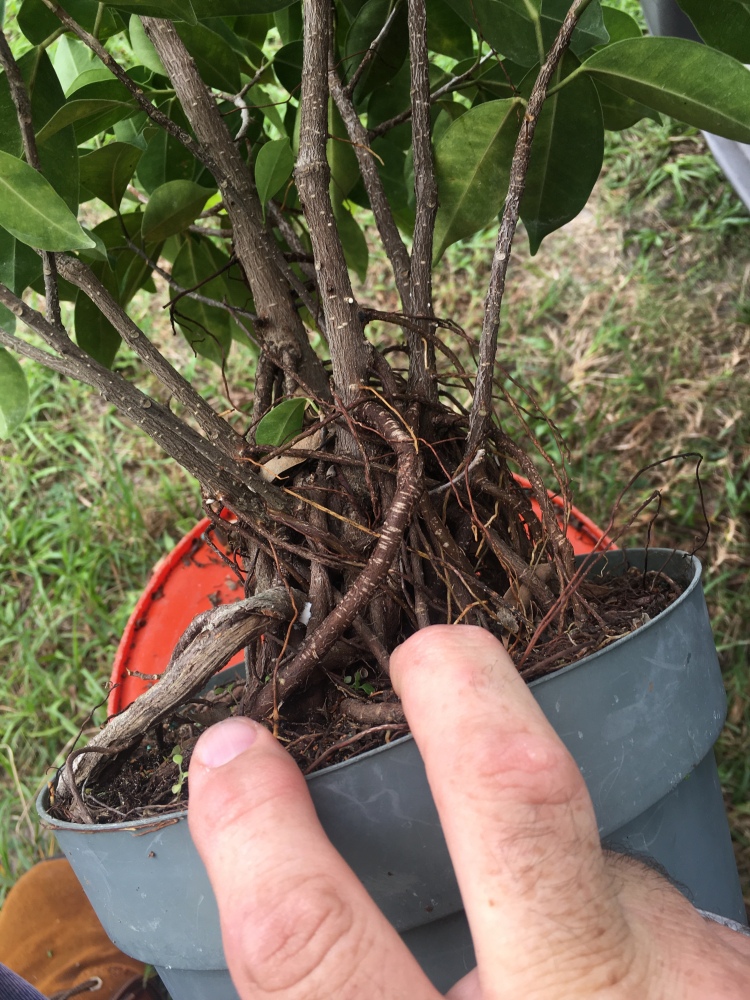 It’s pretty cool to find one of those strangled trees in the wild. Usually it’s on a scrub palm tree but occasionally you’ll see them on oaks or maples. It’s like you’re trekking through the rough on a manicured golf course and suddenly, like a dream, you’re transported to some lost, steamy jungle, decadent with the gripping roots and dreadlock like aerials, the air rife with decaying, moulding vegetation, with exotic birds cawing in the trees and terrible, sharp toothed lizards lurking behind the bushes, ready to take a bite out of your butt.

This here is the best way to identify a ficus microcarpa species. The leaf is larger, but thinner, than most varieties or cultivars.

Tiger bark and kinmen have very similar leaves to each other, except the new growth on kinmen has a more reddish hue to it. I was told, by Jim Smith, who got it from some Chinese bonsai practitioners while visiting his nursery, that kinmen (or kenman or kingsman or kemang) means a man with red hair.

But this isn’t either of those. But you may find some “ginseng” with different foliage grafted onto the trunk, because the leaf is so big. You can reduce them but it’s an intensive process.

You’re probably wondering why I’m working on this tree now, right? Well, it’s an Adamaskwhy axiom that the “best time to work a tree is when it’s growing”, and it’s growing.

Let me try to tell you the thought process as it flows through my brain.

Ready? I warn you, it’ll be a bit “stream of consciousness”

……Hmnh, that’s the thicker upright, that’ll be the leader… 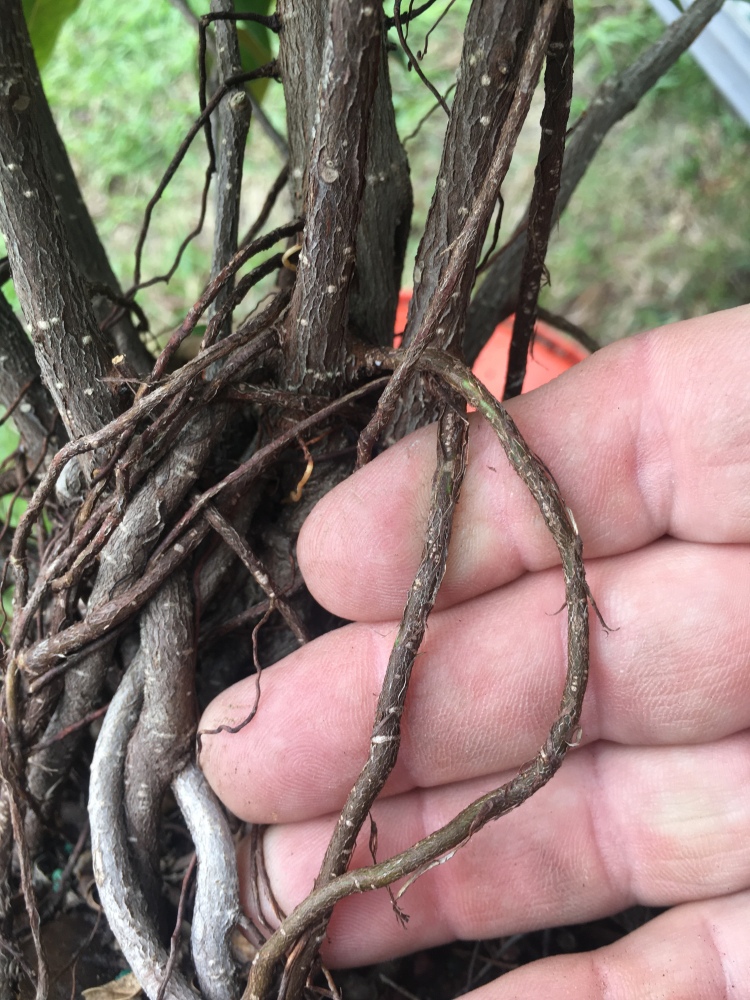 ….this is the front, just need to whittle it down….. 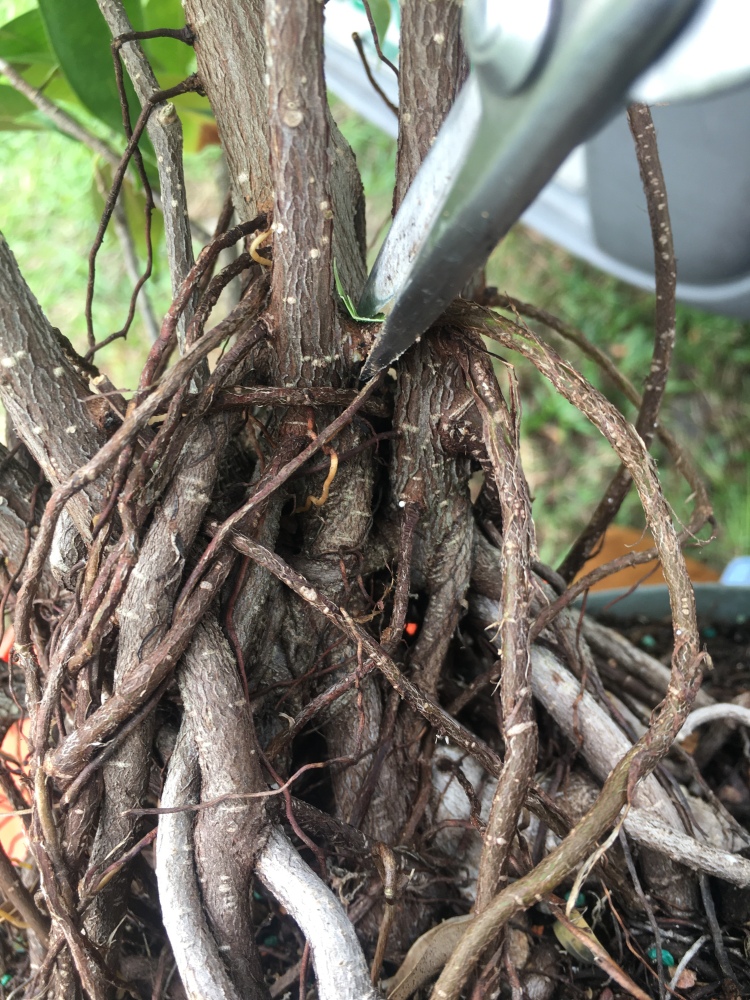 I think you get the idea. It’s a tough job explaining the thought processes as I look at a tree. Especially if I’m giving a live demo at a club or convention. I’m in the moment, as they say.

I’ve immersed myself so much in the horticulture, the morphology, and the cultural aspects of trees that I have internalized much of what I “know” that, at times, I can’t explain why I do what I do.

Many would call it instinct, but it’s really just training.

There’s a show this weekend in North Carolina, called The Winter Silhouette. It’s a cool show with little restrictions on the displays. Very artistic and free. You can be as “traditional” or as “artistic” as you’d like (I put those in quotations because it’s all Art, but the tradition is only about a hundred years old, display-wise, that is. Here’s a link to the show’s website).

Let me start rearranging and removing some roots. Tame the monster, so to say.

That’s a good description of what we do with bonsai styling. Taming the monster, bringing order from chaos. Even the “naturalistic” styles are stylized versions of wild growth. I remember talking to Dan Robinson about a tree he was getting ready for the Valavanis National show in Rochester and the exhibit tree Dan was getting ready. It was a larger tree but, even though Dan is considered to have a naturalistic style, he still had more than a thousand pruning cuts on it, even though it was “naturalistic”. And he wires extensively in a tree’s development. It takes a lot of training to make a tree look natural.

And to make the roots look wild and decadent, it’ll take some training too.

Now for the top. 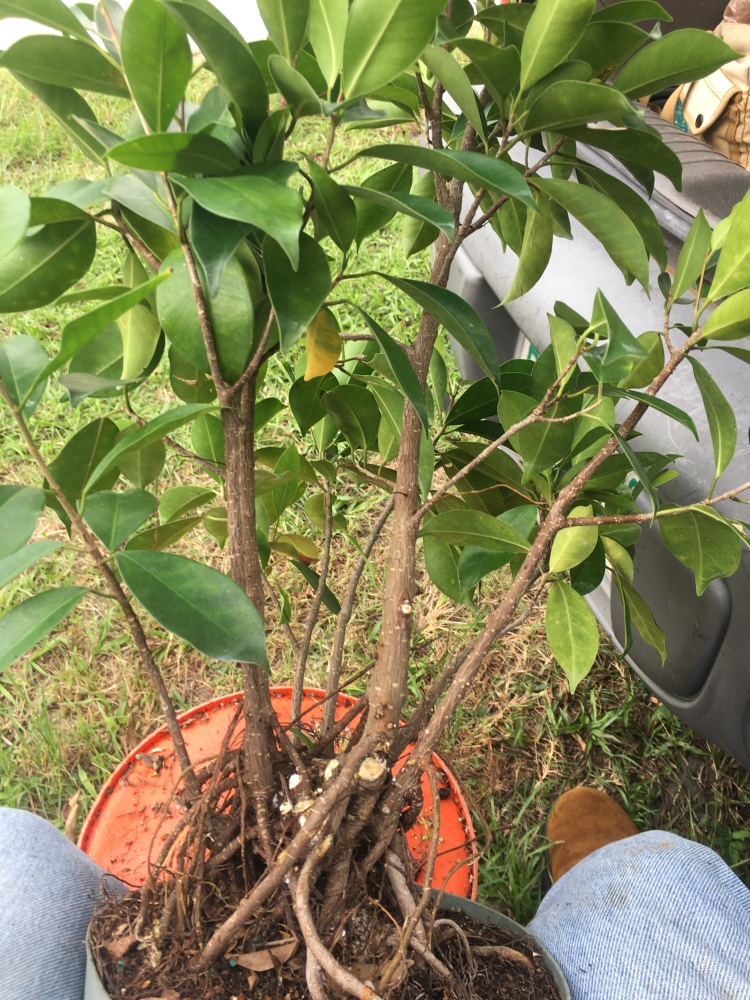 Some wire, some chopping. 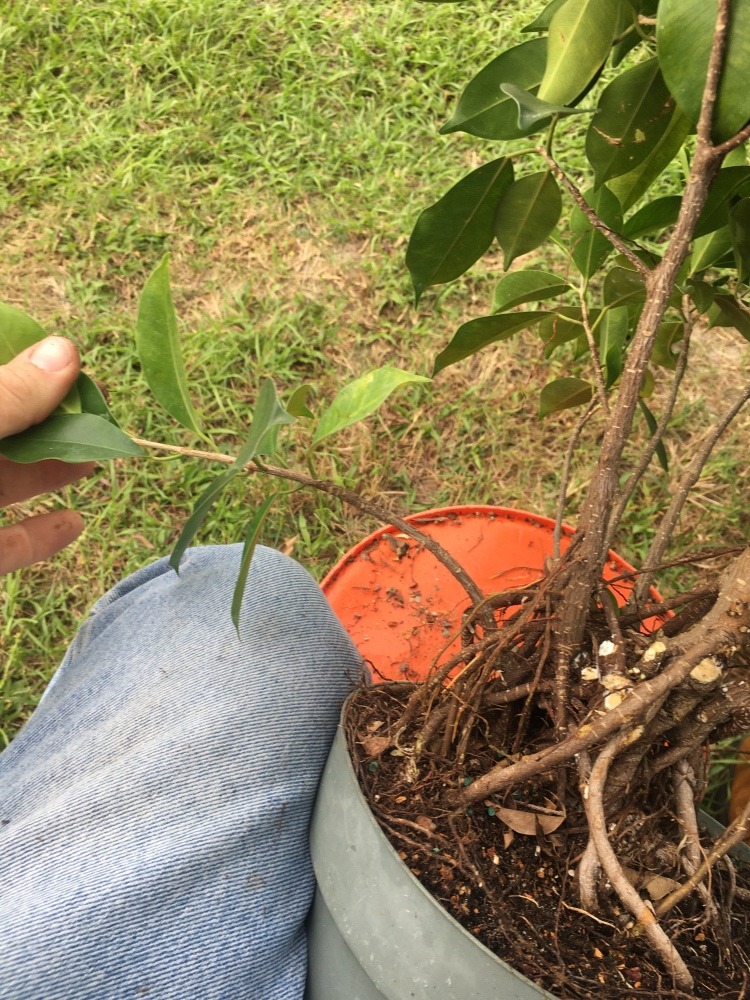 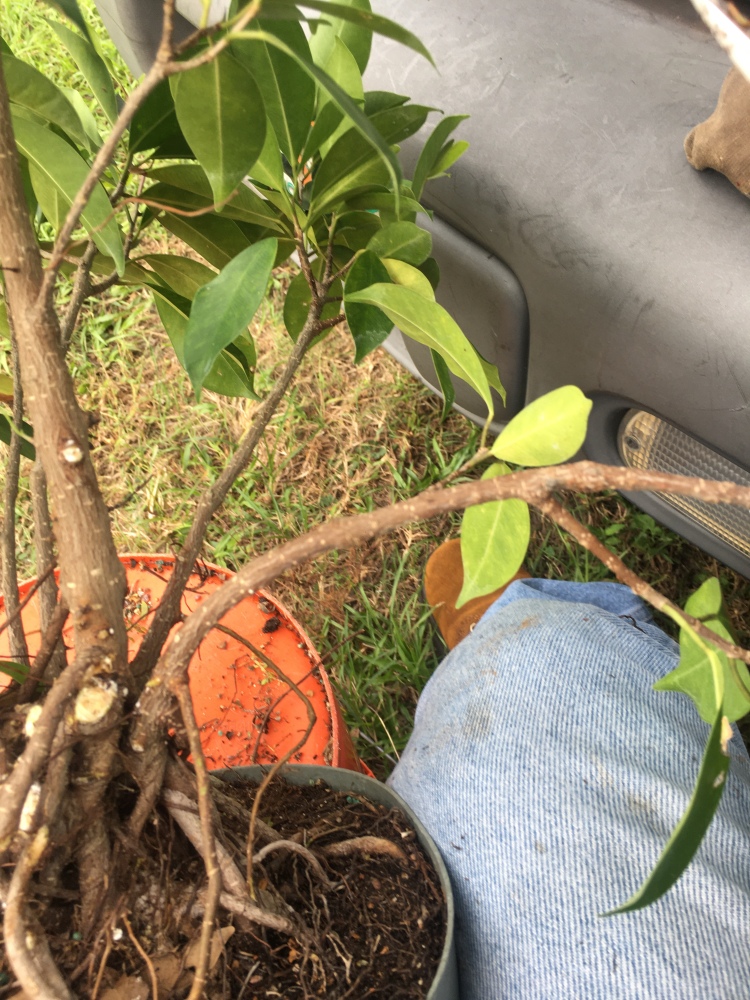 The goal is to simplify the branches so we have just one or two branches in place to fill in the spaces. 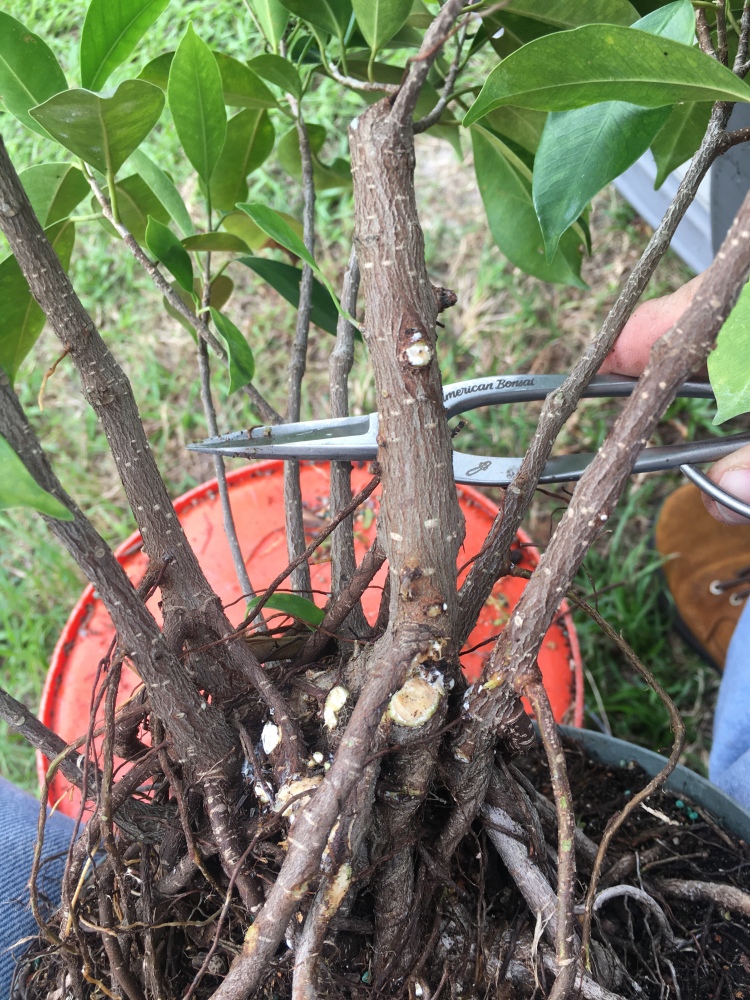 Like here….there are three branches in the same spot. 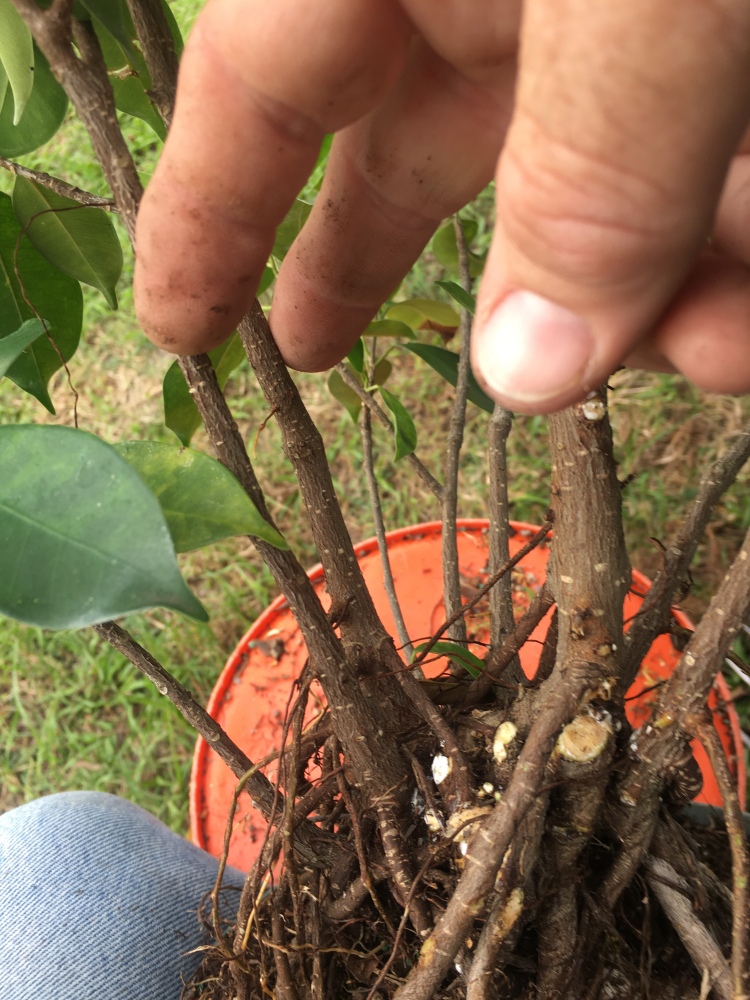 Which is not very bendy (that’s important)

I also have roots I can propagate with.

That’s am assured cutting success. Even in winter.

This will be one of the “tops”. 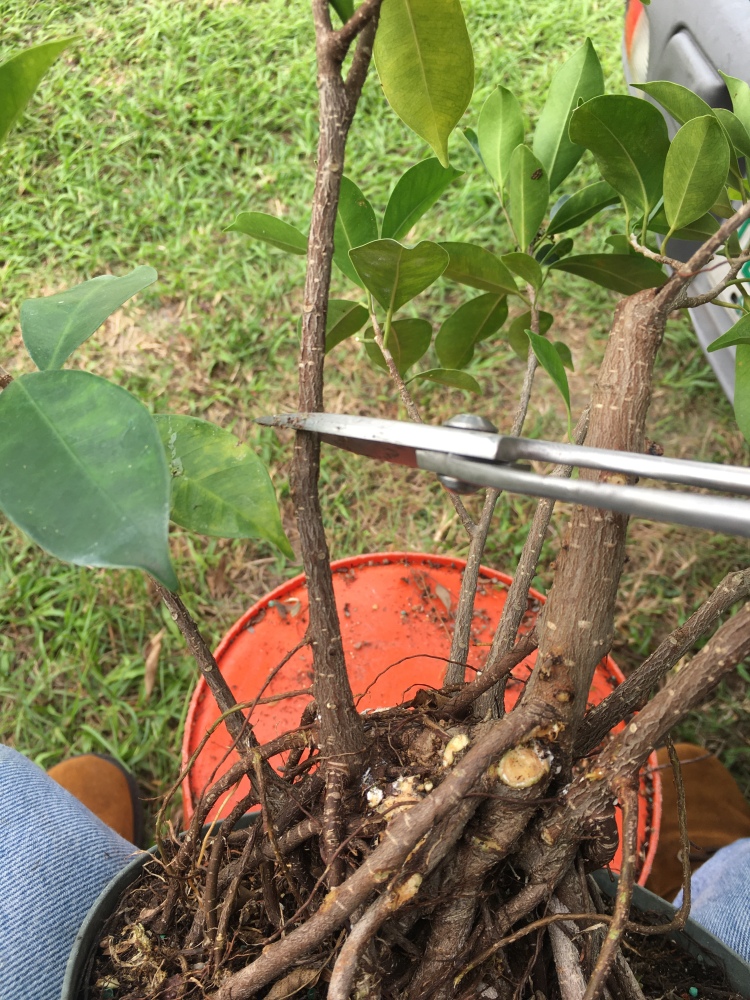 That’s a good back branch.

I’m not gonna bend the main trunk, but the side branch will move.

But I want that aerial root moved as well.

Yank it out of the dirt….bend the branch. 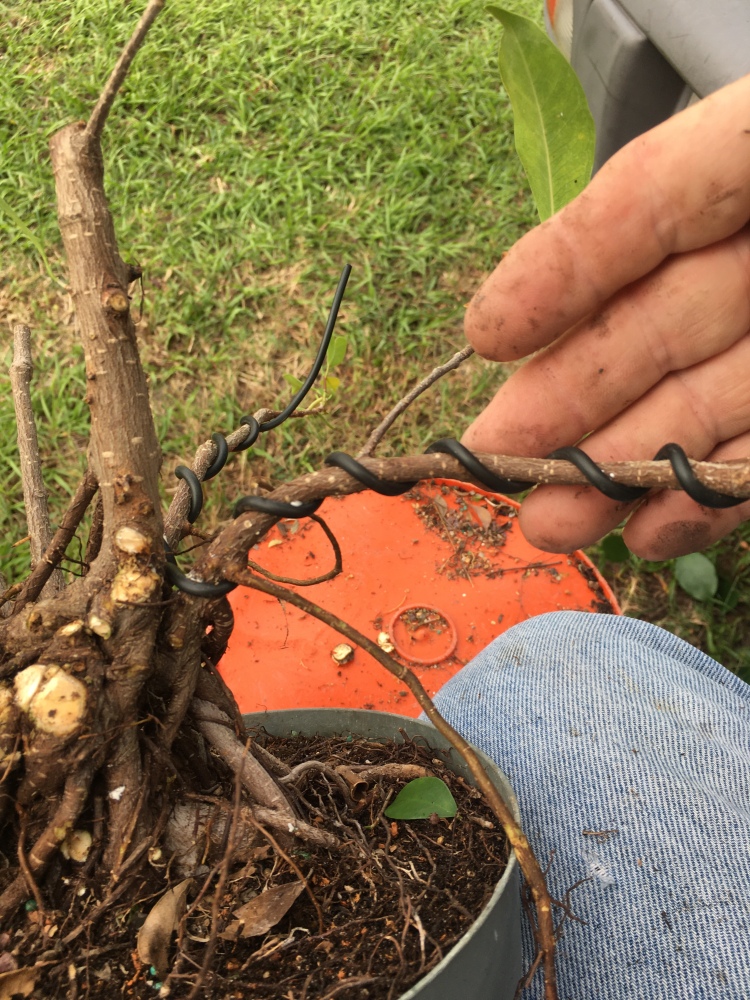 And stick it back into the pot. 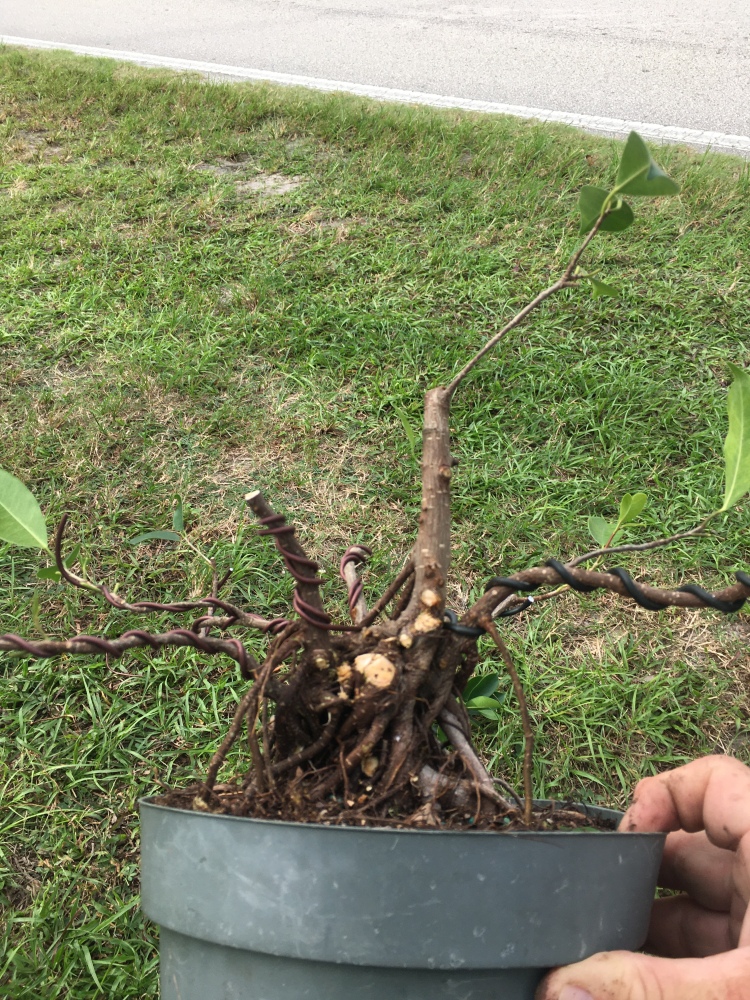 And back in The Nook, I hit the tree with an organic fertilizer.

And now we wait for spring. 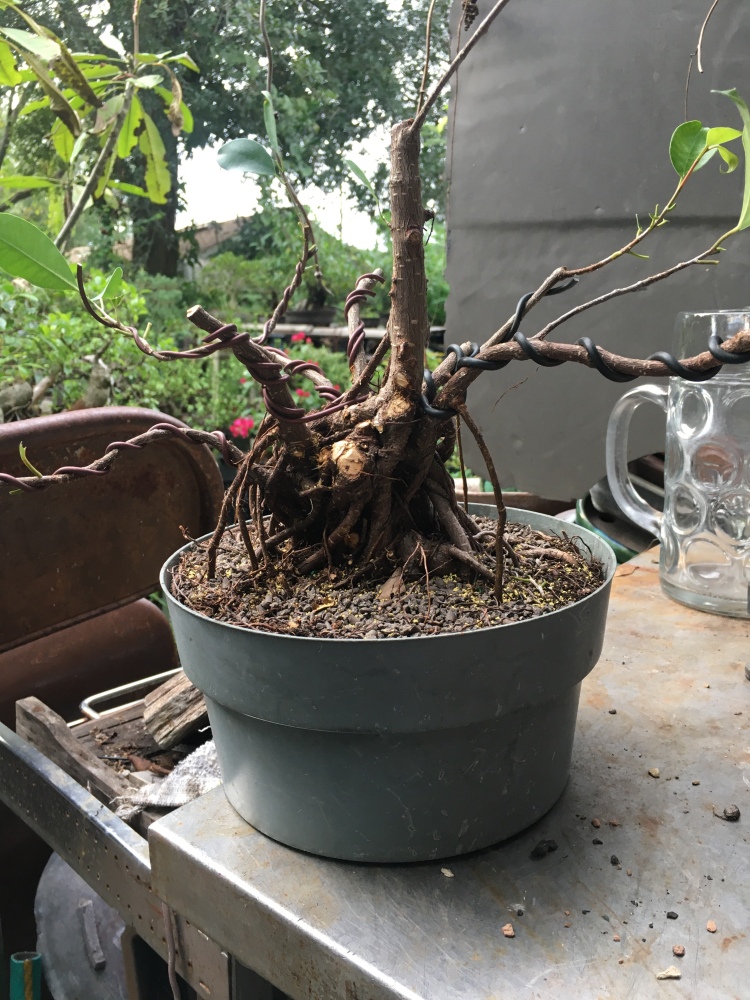 There are those who would advise against a hard prune like this in the fall and winter months. And, generally, on all plants, you don’t want to do it (except for in the colder areas, a good time to prune deciduous trees in the ground, and to even plant them, is in the winter).

On hardy trees (and hardy has a specific meaning, it’s cold tolerant, like conifers, or broadleaf evergreens), it’s not a good idea to prune after the end of summer (in many places. In Florida it’s after October) because any new growth will be tender and not hardy (this is why they call growth that’s matured “hardened off”) and will get damaged from the cold. It is from this wisdom, don’t prune plants too late in the season, where we get the admonition to not prune ficus, nor even fertilize, too late.

But on tropicals, which we would be protecting from the cold anyway, and can, and will, and most often want to, grow, why not take advantage of that character and get some development out of them.

To give some credence to my argument, honestly, I did this work a few weeks ago, before we had a cold ….cool snap. And here’s the growth since then:

I was worried about the hard chops but they backbudded like crazy. 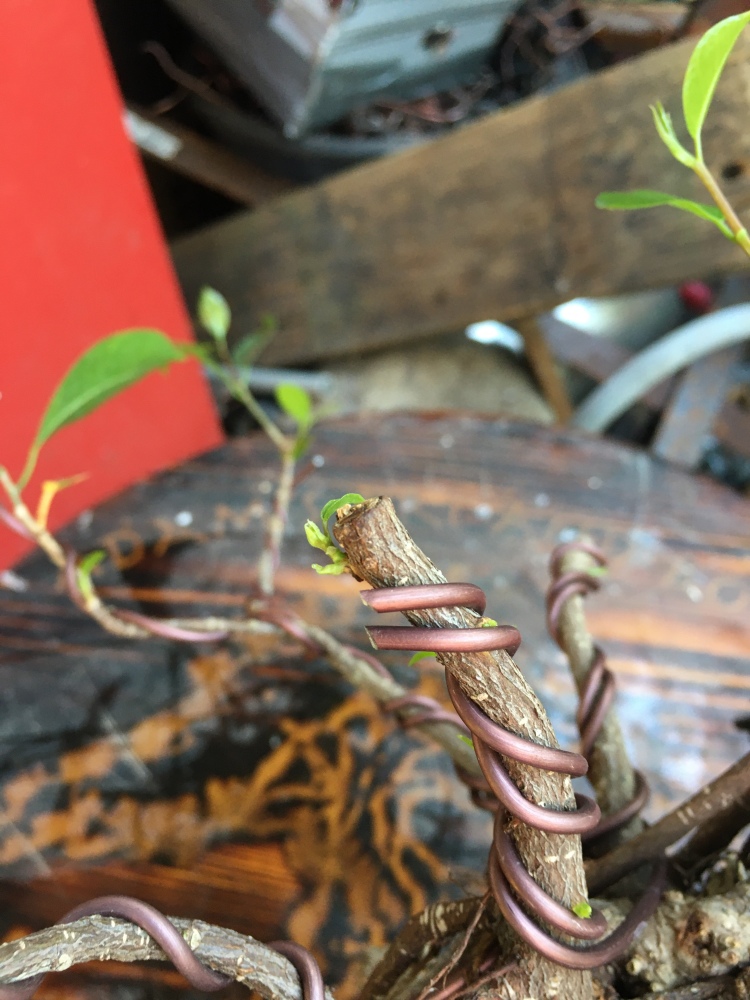 It almost looks like the wire is even cutting in.

Now, my own experience is not a scientific validation. It’s anecdote, but these last few posts, and my nigh-on-twenty years of experience do count for something.

Not a lot, but something.