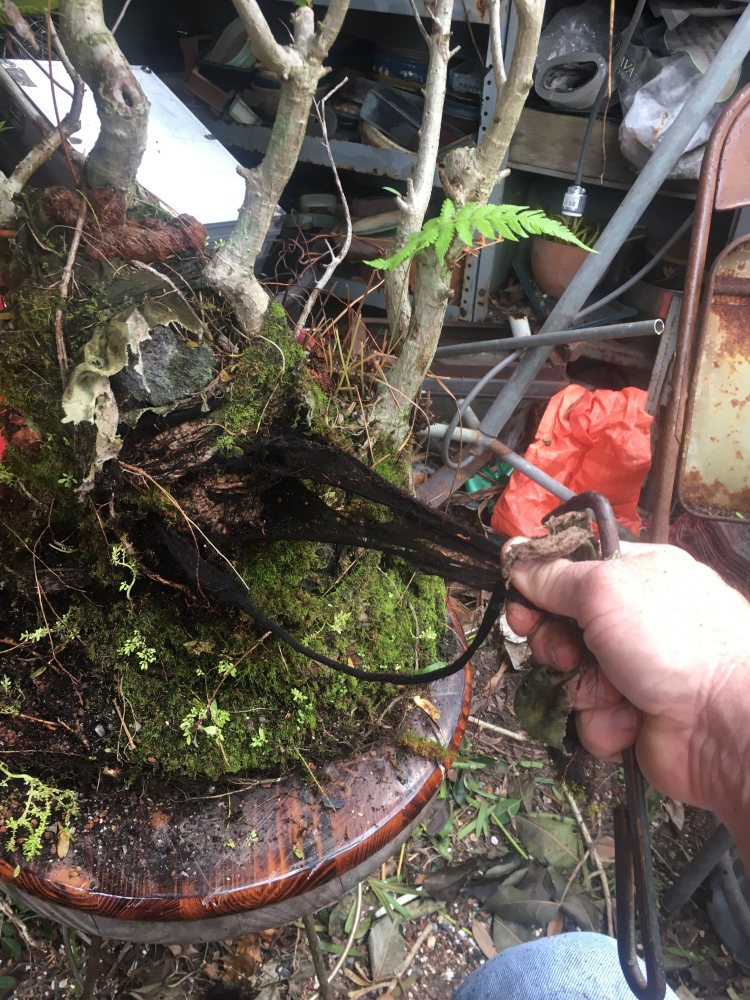 Whatever you call them, I hate ’em. 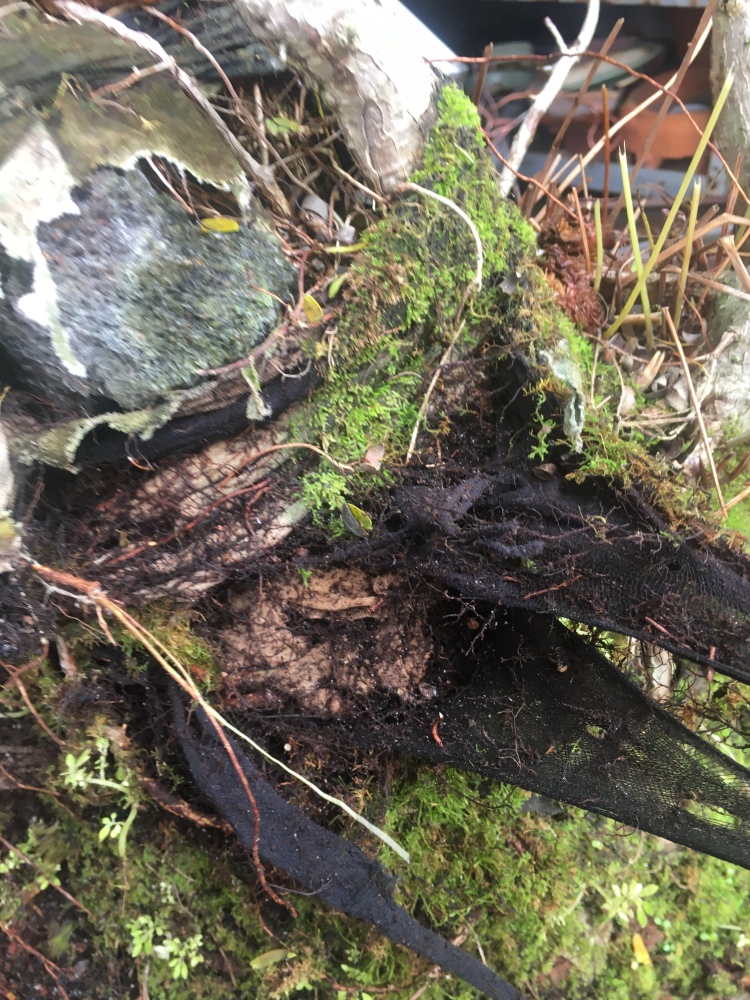 Warning: if you are ever signed up for a “root-over-rock” ficus project, and the instructor suggests using panty hose as the material to wrap the trees around the rock, just get up and walk away.

Don’t even worry about a refund. Pack up your tools, put your turntable in the trunk.

Just make sure you put your hosiery back on, especially if it’s before Labor Day. You don’t want to be unfashionable with bare legs.

You’ll also notice some fern leaves, or whatever they’re called. Don’t put ferns on your trees. You’ll see why in a second. 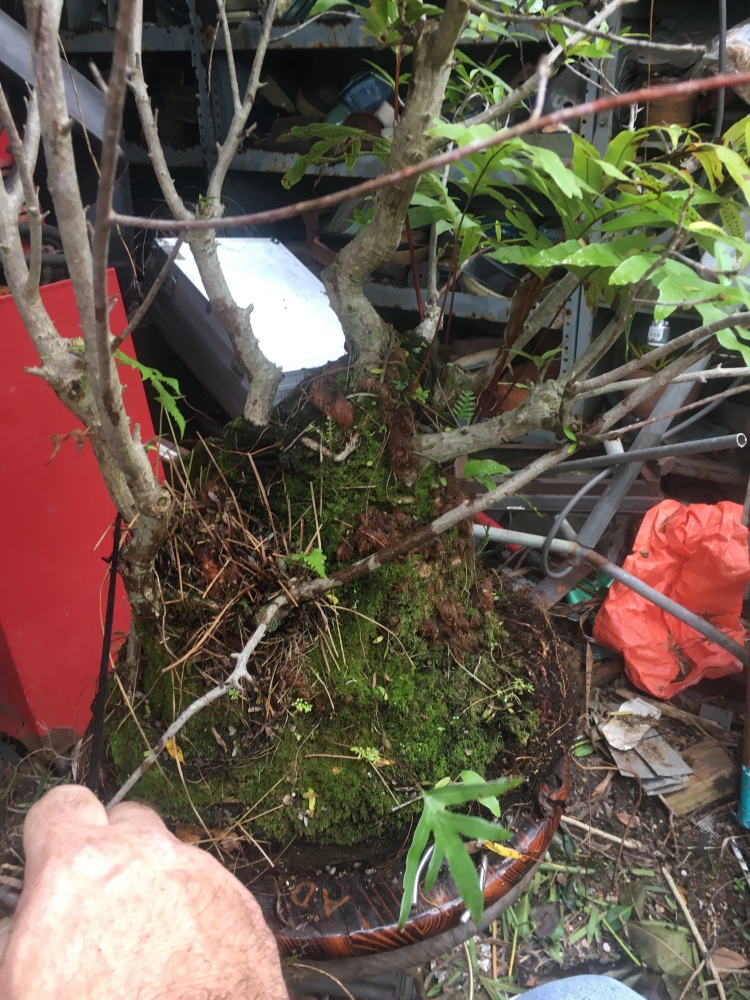 I’ve had this willow leaf ficus for about a half a year now (I got it in the purchase of a collection) and I’ve been dreading this work.

After about a half hour, cleaning the moss and ferns and some of the nylon off…… 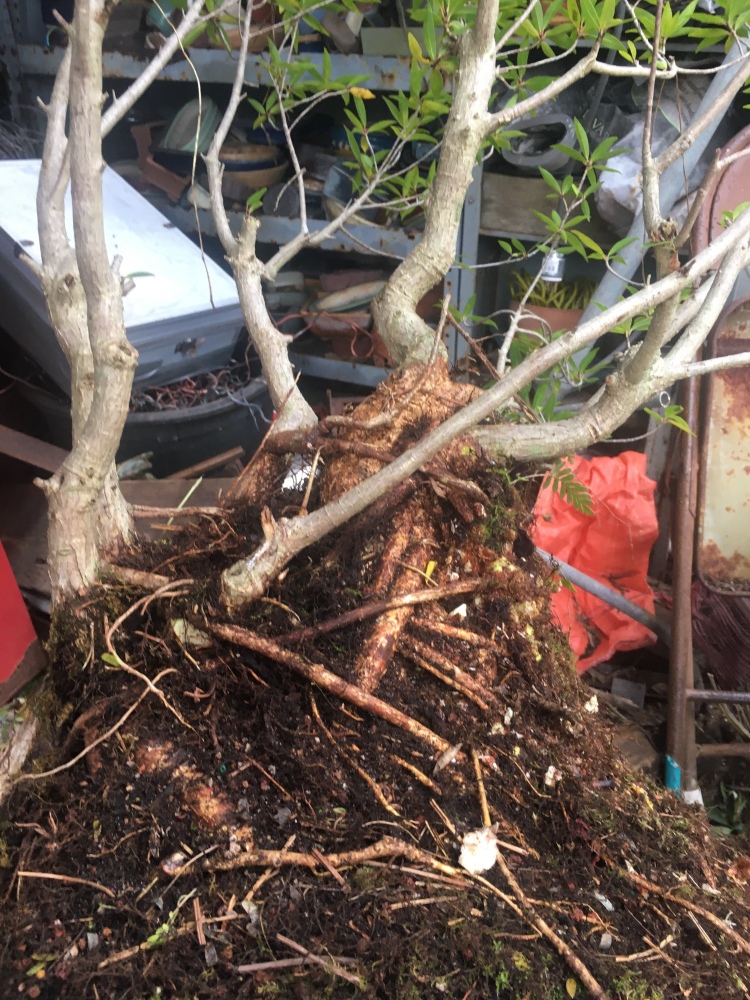 ….you can begin to see a glimpse of the trees structure. 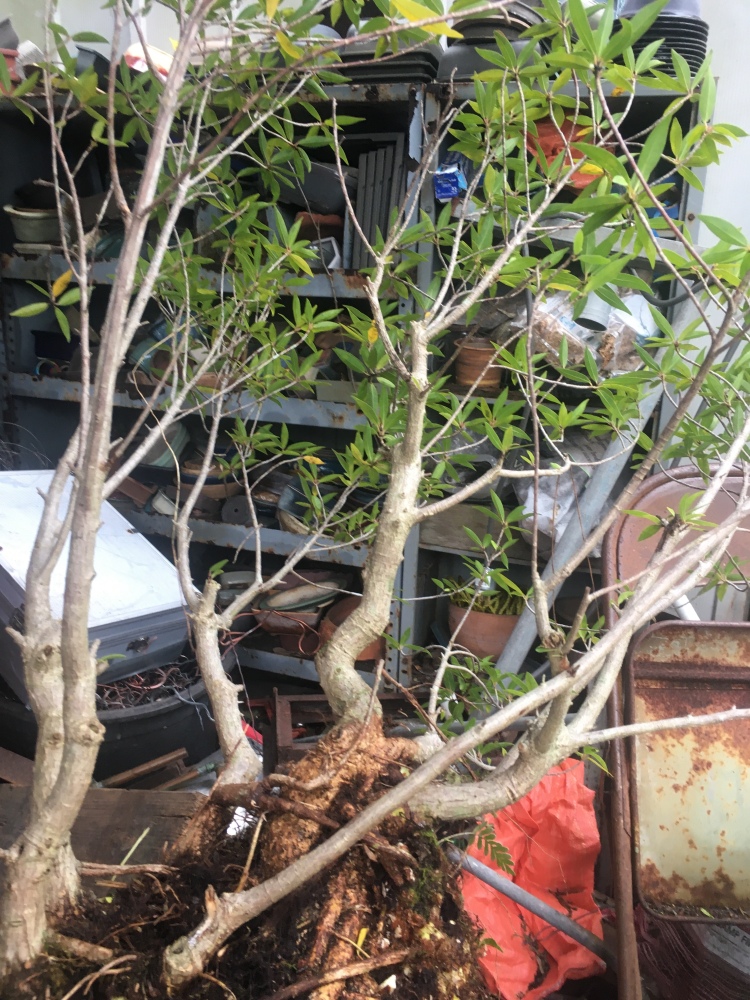 I’m not really sure how long it’s been wrapped but the roots are very well grown and established. 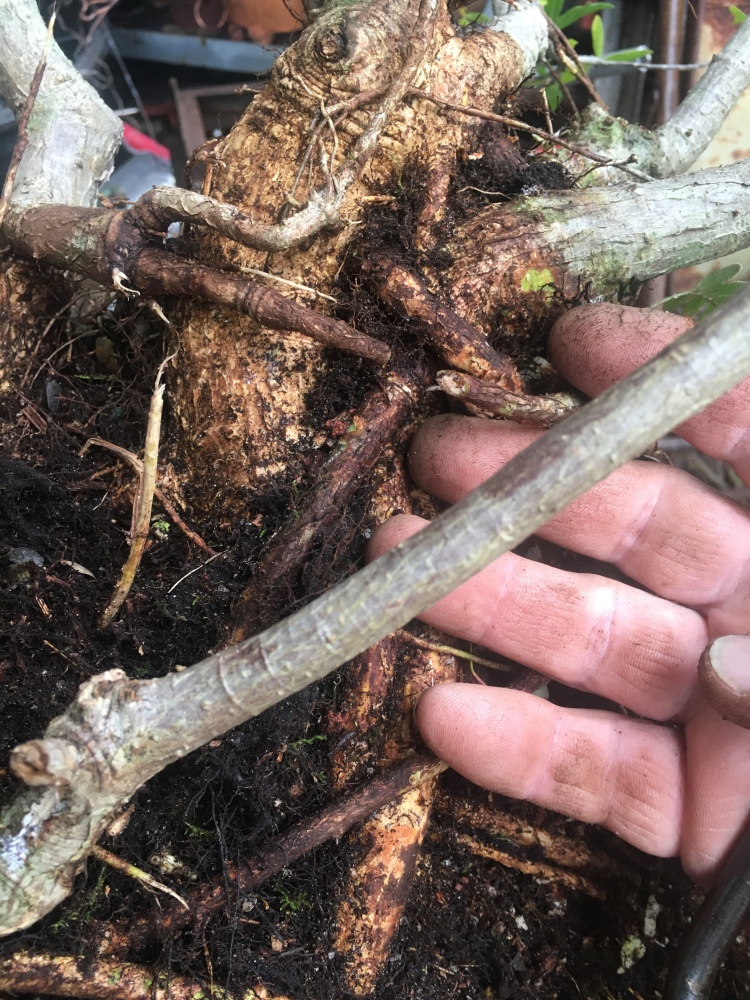 When I got the tree from the collection purchase, I knew what I had. Wrapping a ficus and then forgetting about it is a good idea. And no, I don’t have a better suggestion as a replacement for using a material that is stretchy (which is what you need for a root-over-rock build), that isn’t also synthetic and not easily removed once the roots grow into it.

My implements of destruction. 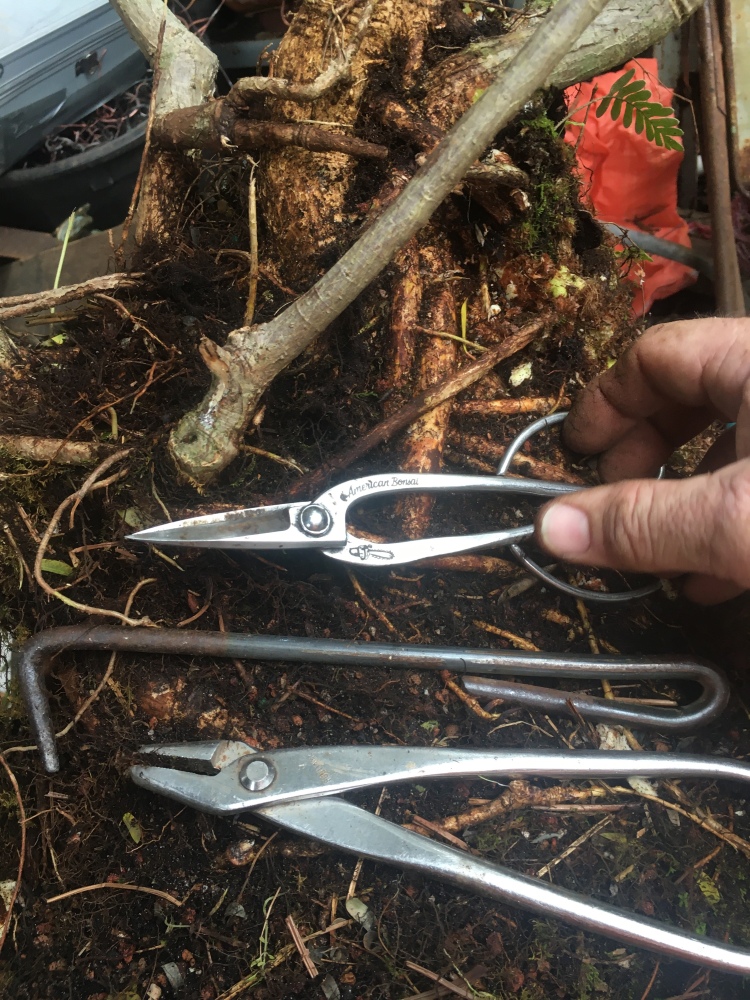 Remember the fern? (I think this is the actual species in that book, “Where the Red Fern Grows” that made my generation all cry at the end…).

It’s making me cry now too. 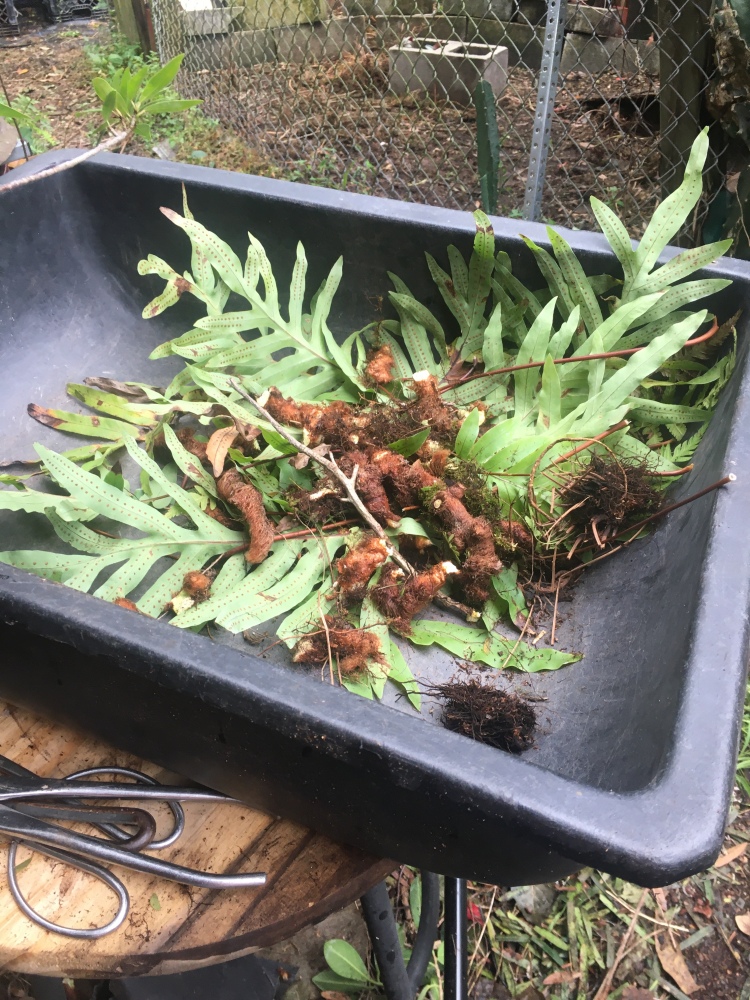 Those stems are rough to remove.

But enough bitching. You know I love the work…..

This is the rock it’s attached to. Some type of volcanic scoria, what the trade calls “feather rock” as it looks like a boulder but it’s as light as a, well, feather.

Not the best rock. It’s a bit crumbly, not very sturdy, but it’ll work for a while. 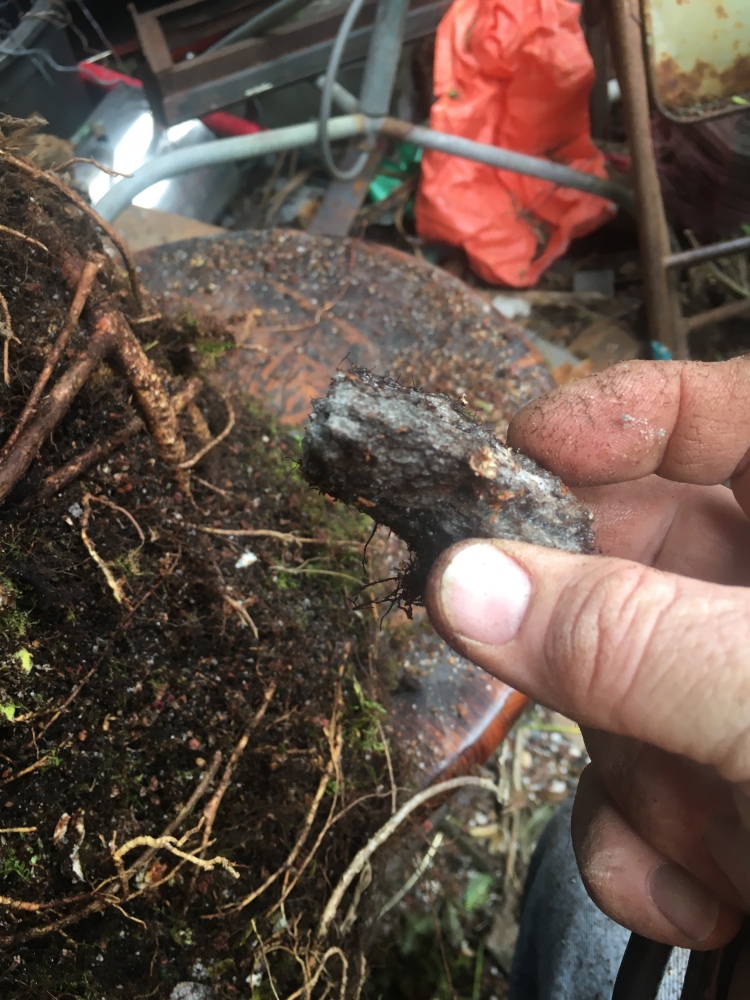 This little root puff below is from that damned fern. Its roots are all throughout the tree. I just hope it doesn’t grow back from the roots; there’s no way I can get rid of it all…….well, save fire, and though I like to play with fire, I don’t think my ficus would appreciate it much. 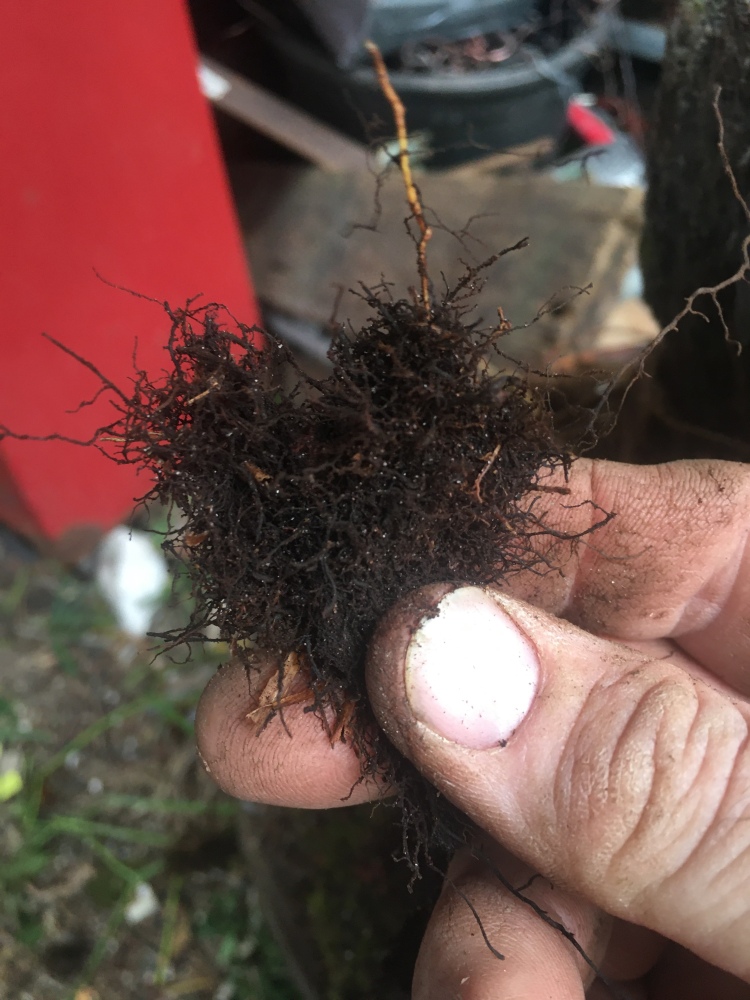 For comparison, these are the ficus’ roots (ficus salicaria). 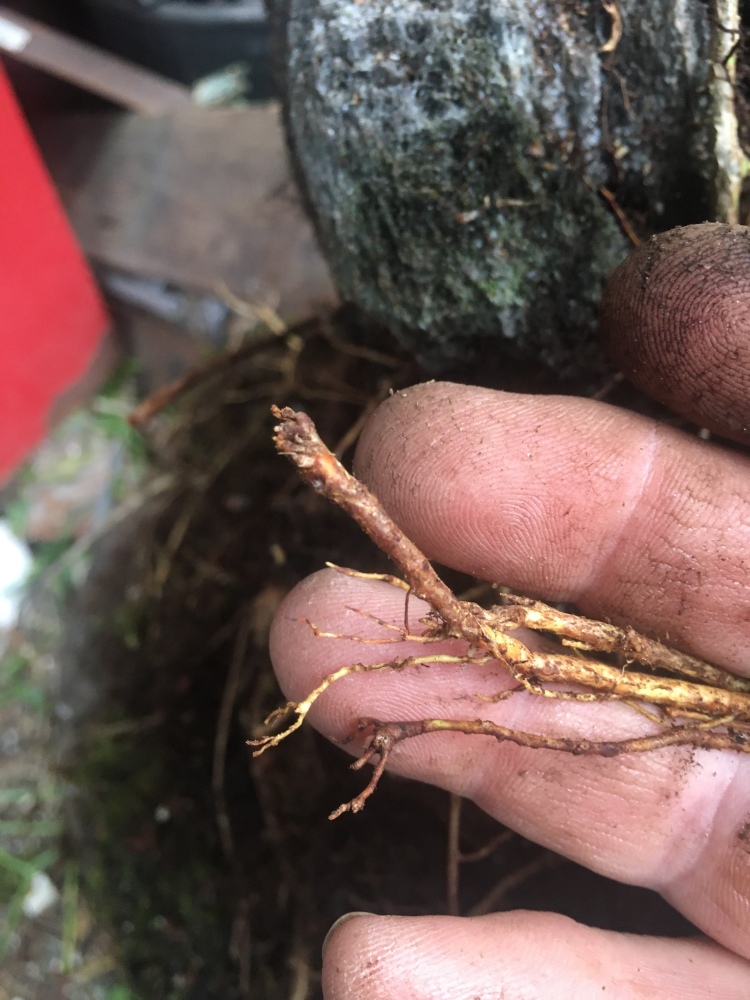 They grow aerial roots, and invasive roots in the ground that can tear up septic drain fields or displace house foundations. But as for fine roots, say like you’d see on a maple or pine, or even a juniper, they just don’t do it. If you can get them to make a good spongy root mass, your soil and watering game is spot on, but it’s rare. They just don’t seem to need a fine root system. They’re survivors: they store all kinds of energy in the trunks, and in specialized root masses (that resemble tubers), they can go extended periods of drought and drop all their leaves, and they’re very efficient at photosynthesis, able to live inside the house with only old “The Price is Right” reruns as a light source (Come on down! You’re the next contestant!)

For example, amazingly, I had this tree sitting for that whole half year without a pot. 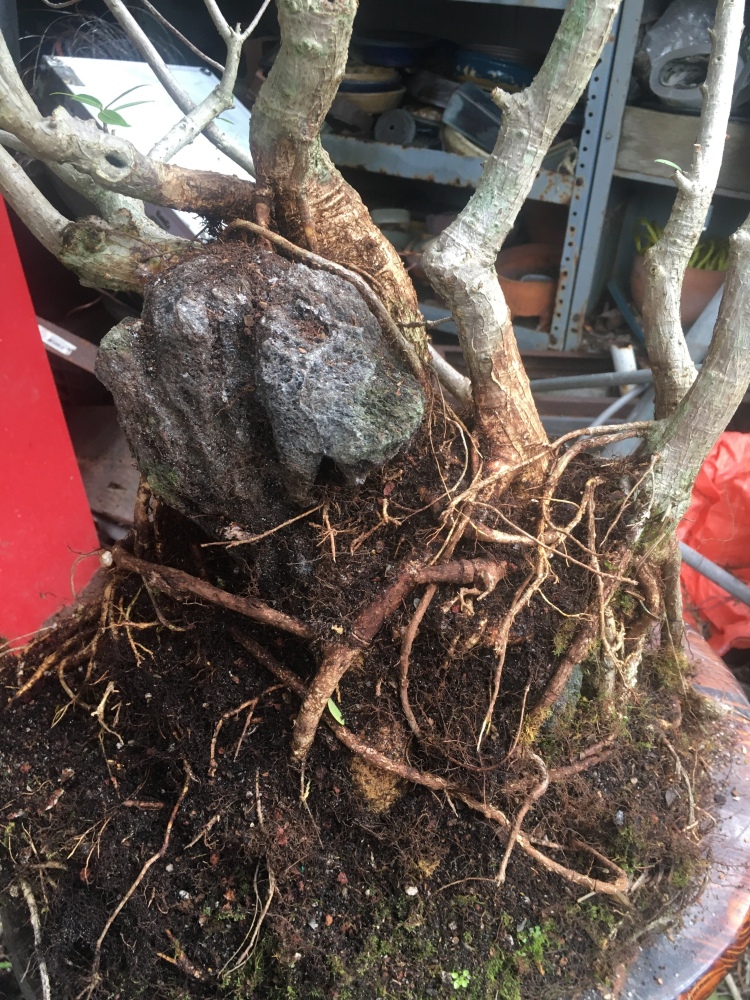 (I have a friend who’d lose his brain going half a year without no pot….)

It sat on the bench, not the ground, just as it’s sitting on the turntable below. 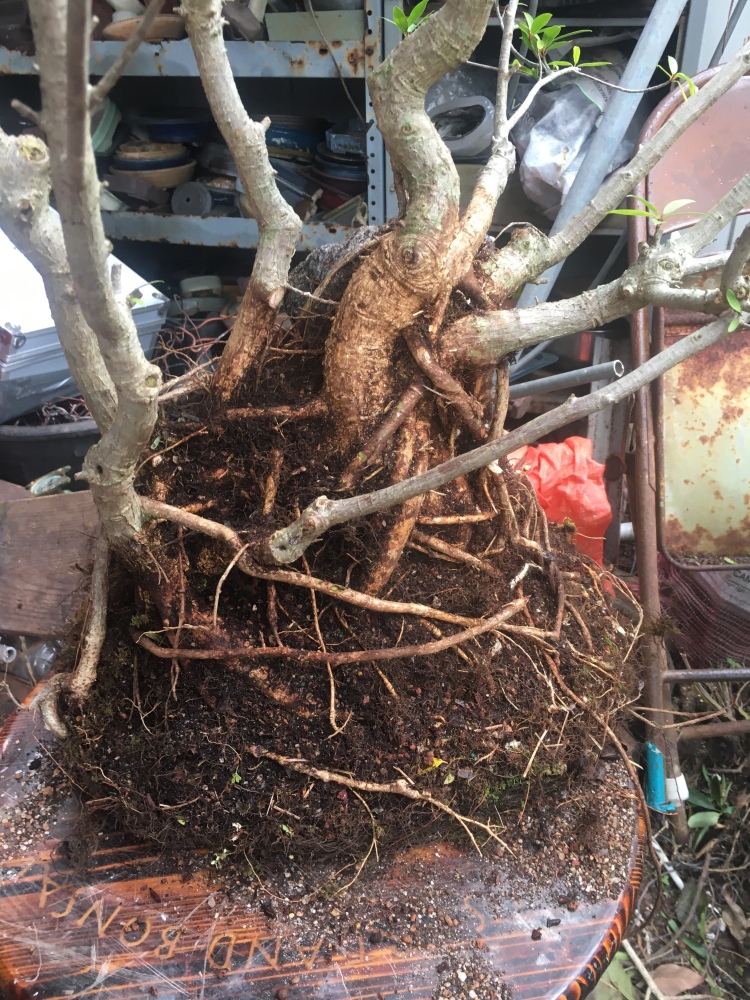 Don’t you worry though, (and I know there are a few worriers out there shaking your heads and muttering “poor ficus”) it’s gonna be potted up today.

Or tonight, as soon as I go to Bed Bath and Beyond and get some lotion for my poor hands (hey now, a man like me needs premium lotion for these valuable fingers. I’m an official hand model for American Bonsai Tools and Corona beer…..and it’s the Semi-annual, end-of-the-year, BOGO, “let’s try to make a profit” sale at the mall) 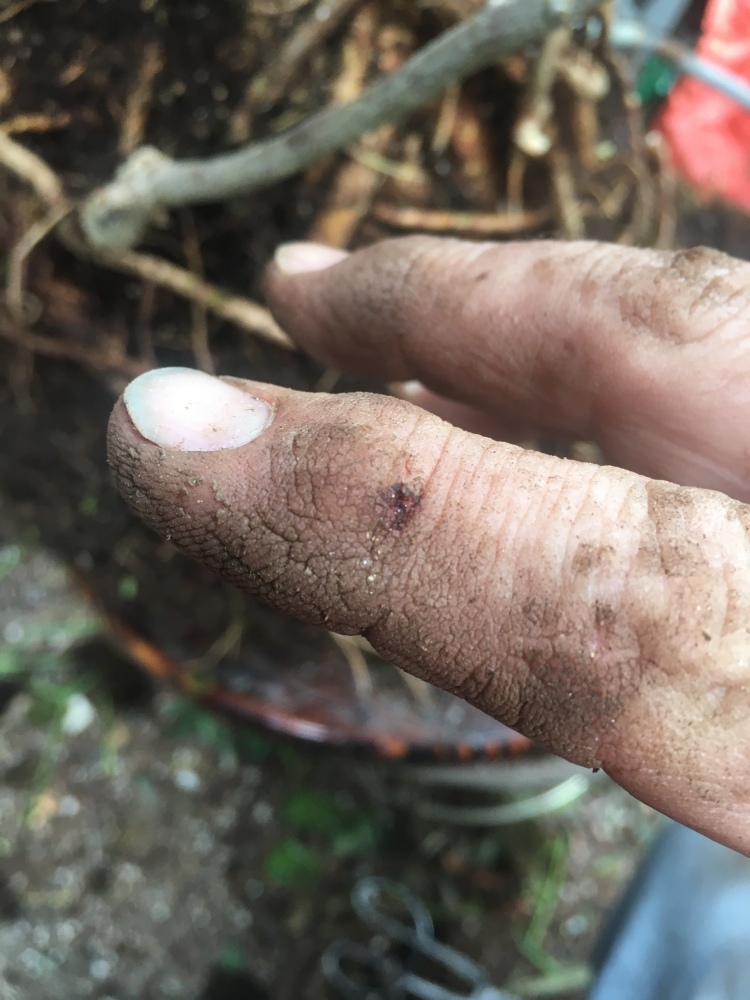 It’s funny, I’ve seen all types of photos with bonsai artists wearing gloves while working on their trees lately. 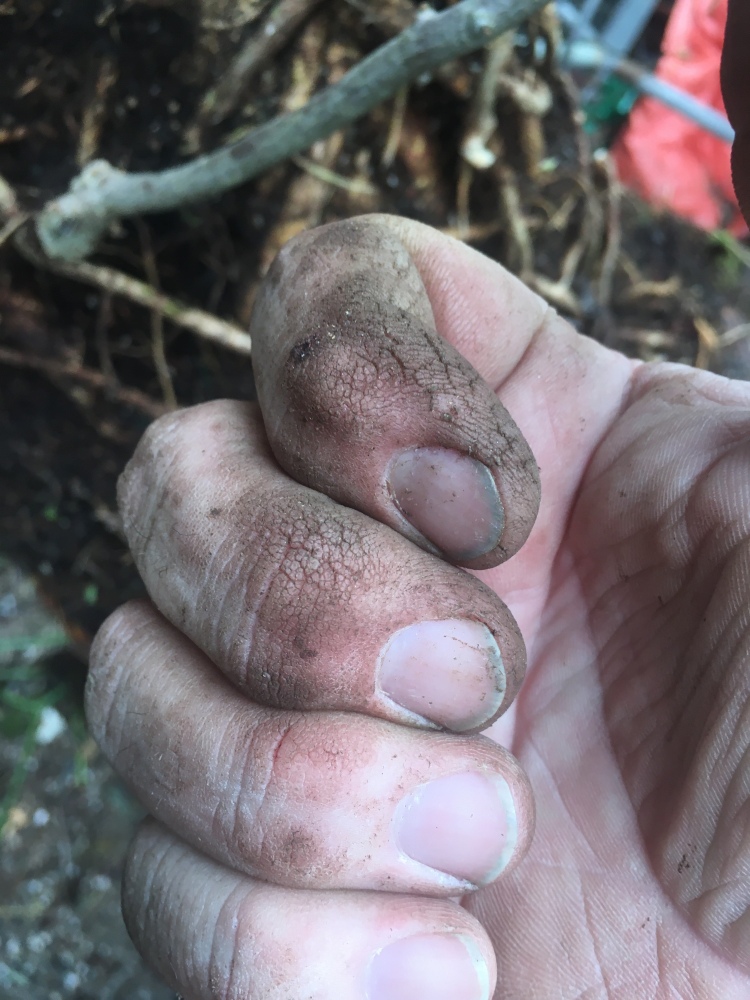 Rubber gloves, gardeners gloves, Mechanic’s gloves, all kinds, so to, you know, to protect their soft, girly hands. But it’s always guys though. There’re no self respecting female bonsai artists that I know of who wear gloves.

And definitely not Mary Madison, Florida buttonwood Queen, for sure. 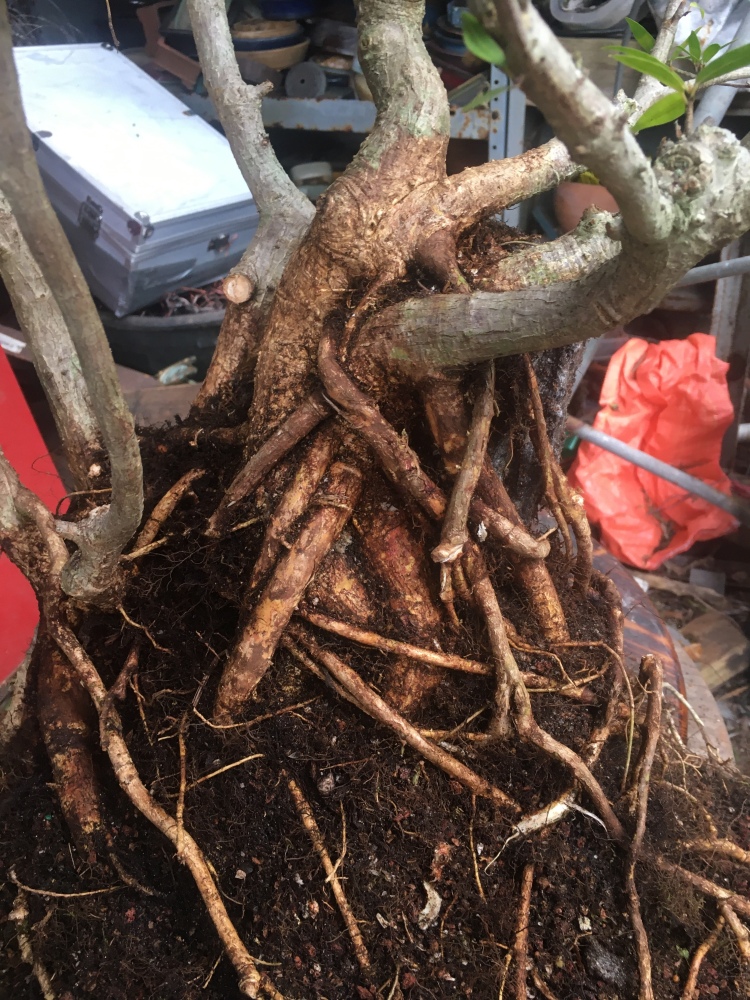 Stella the Cat doesn’t mind my rough hands. She’s purring with just a stroke of my fingers. There’s a joke there, not an original one, but a joke nevertheless. 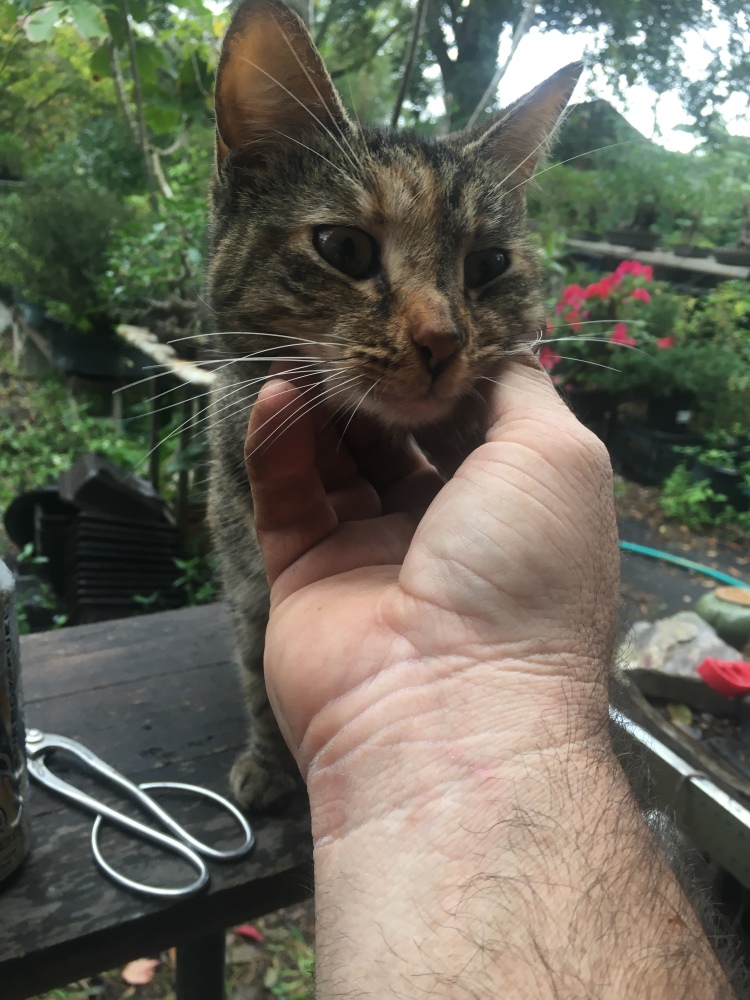 Now that I have 99.98% of the panty hose off, I can wash off some of that nasty dirt, and you’ll really see what I see. 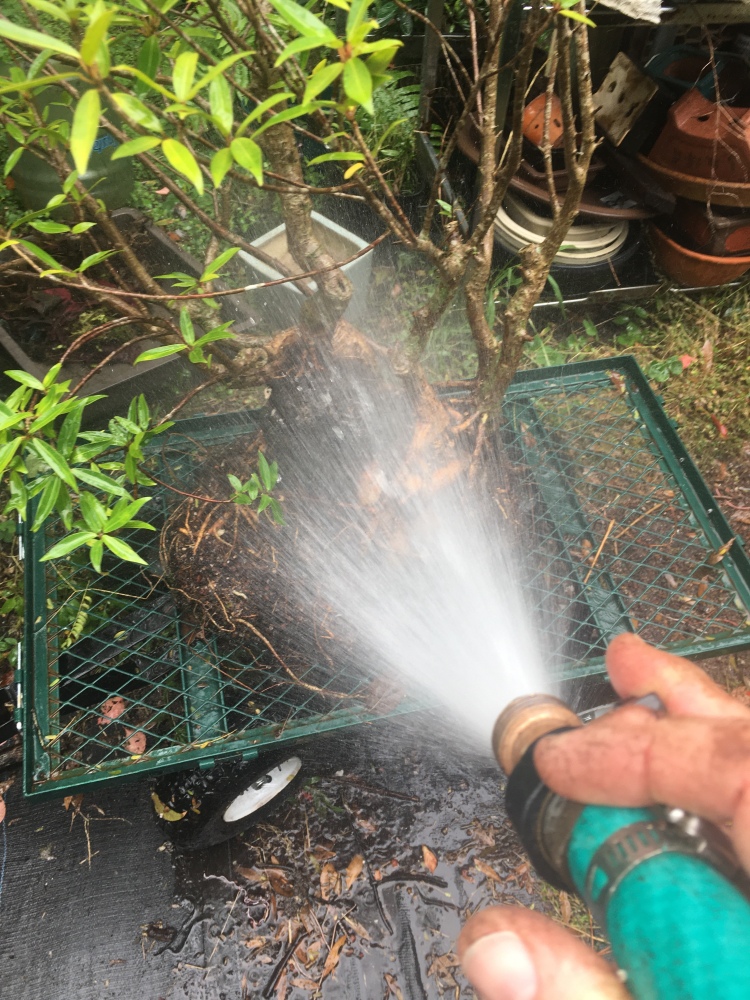 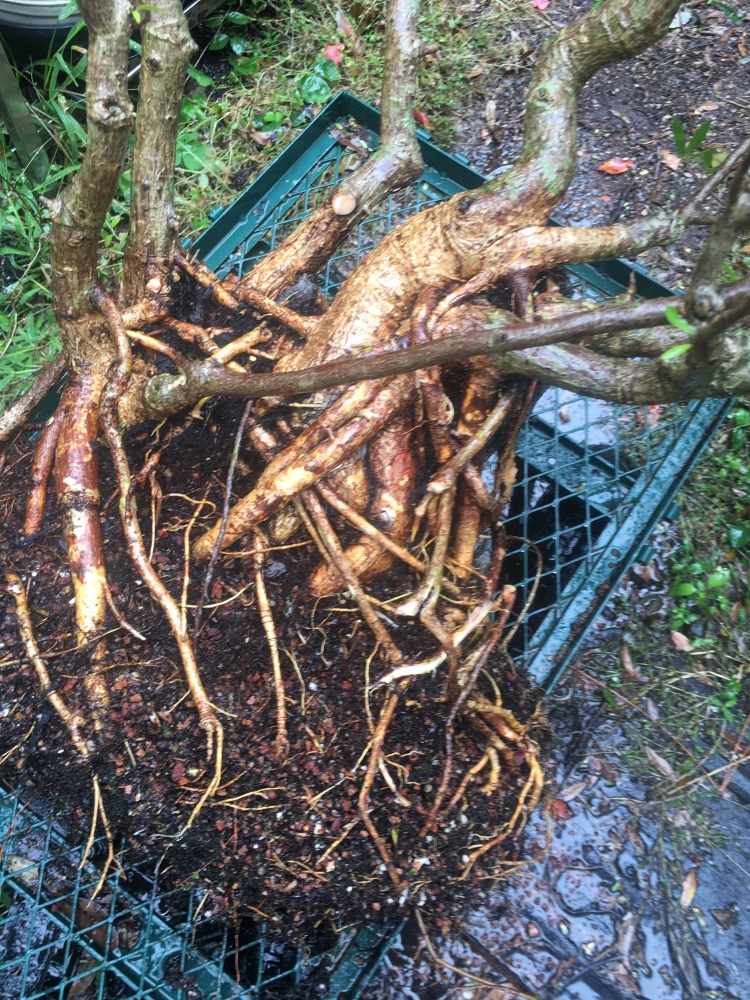 I knew this was gonna be cool. 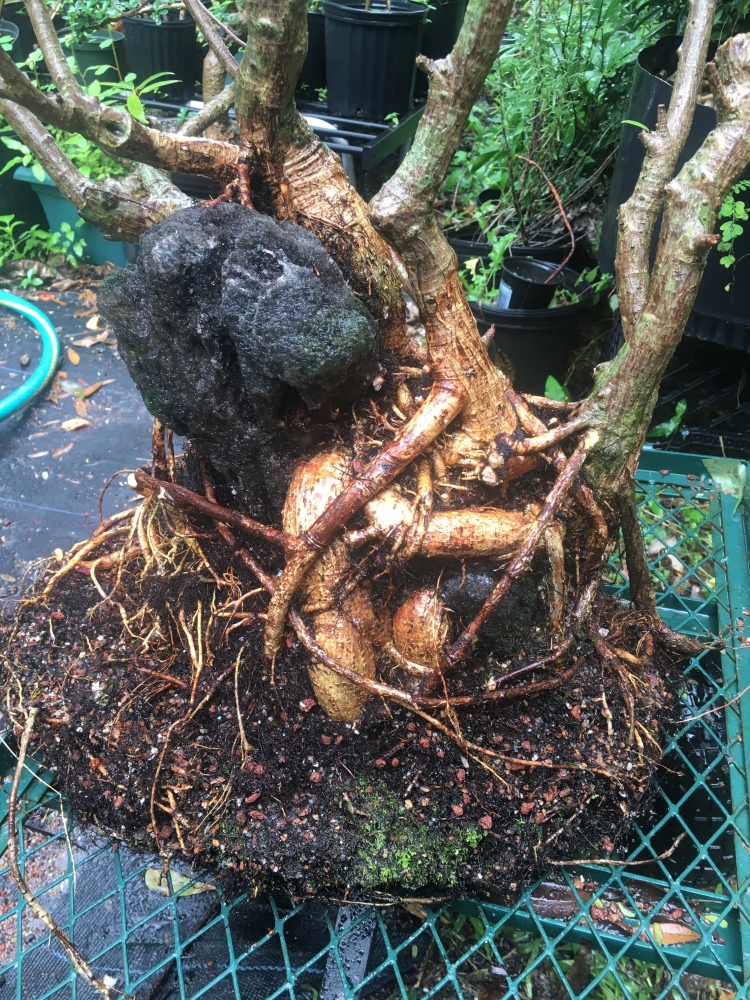 I got the tree from a lady who was moving into an assisted living facility. She was once president of BSF, Miriam Berninger. 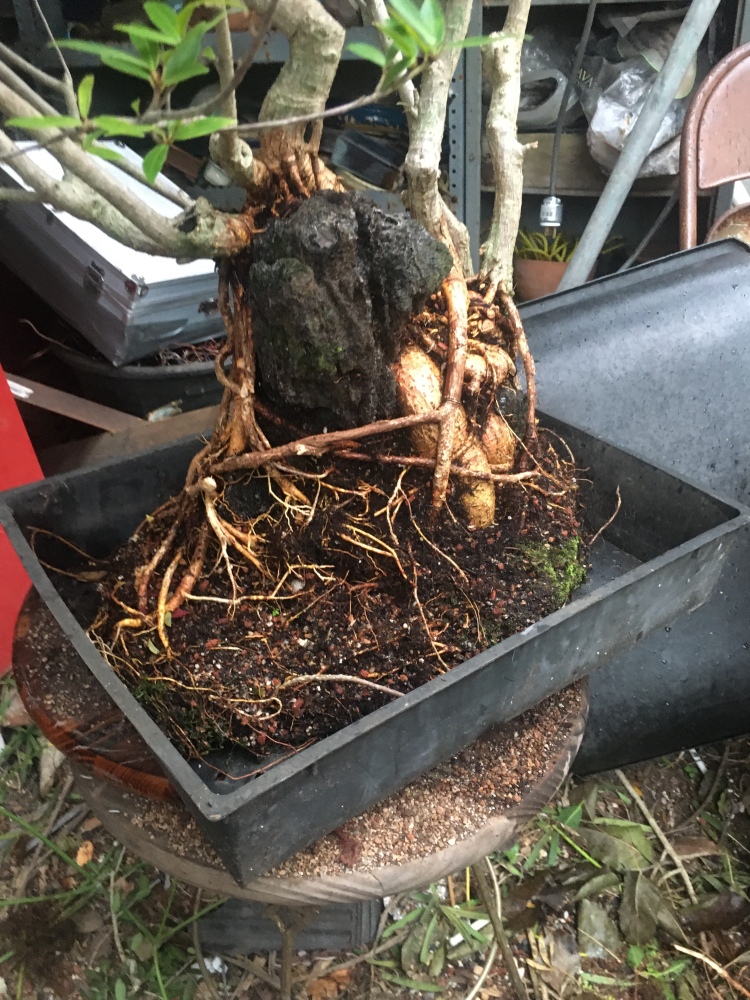 Sadly, I just learned that she passed away. 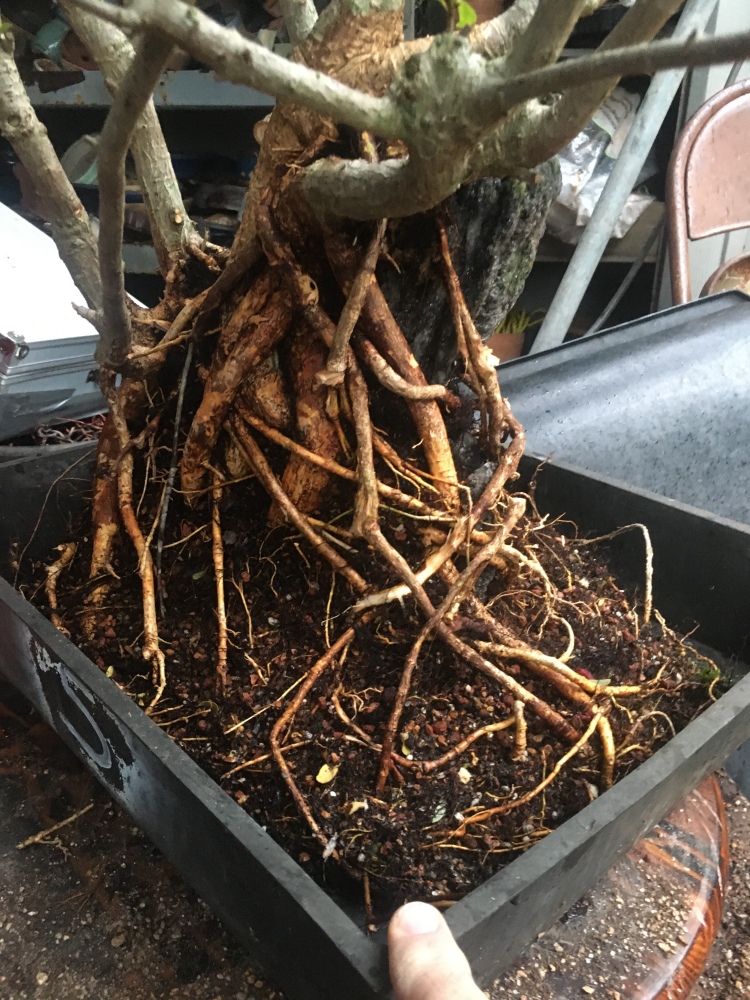 Which makes this a tree that won’t leave my nursery. 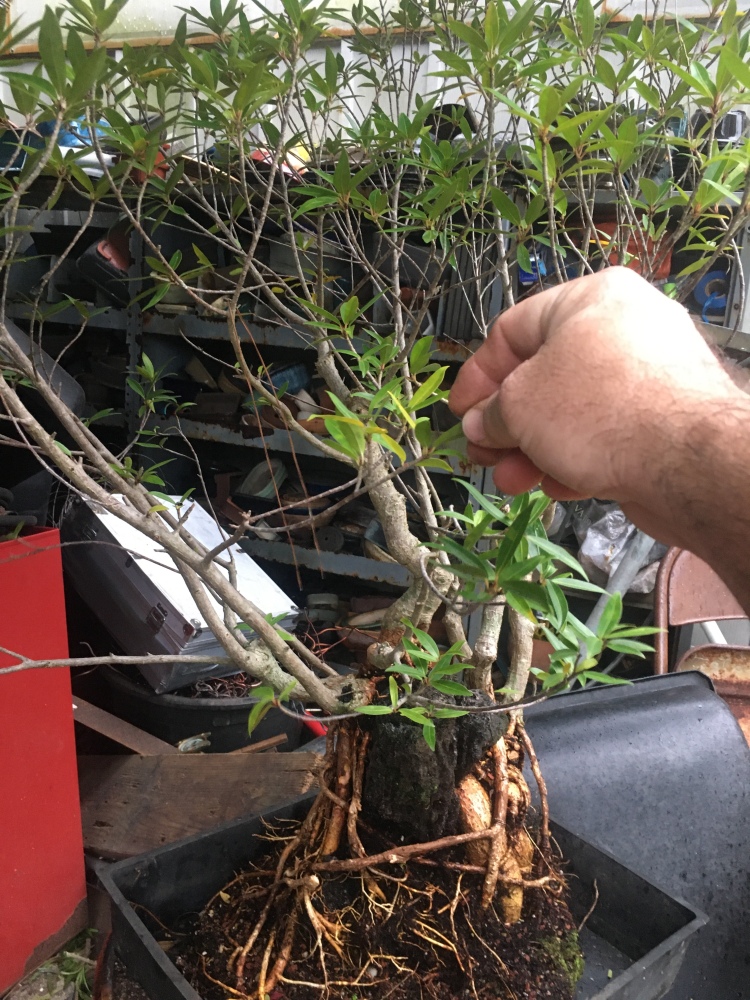 I’ll develop it as best I can, and I can imagine an amazing future for it. It was set up and started in the best way, for the future.

But the story of the tree will be just as important as the tree itself.

That’s what bonsai is about.

I need to mix up some soil to get the tree into a training pot. 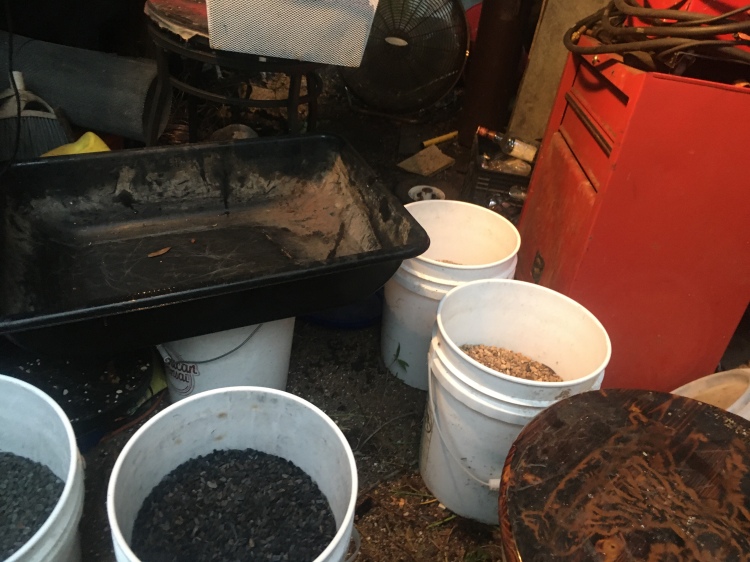 I have a new component. It’s the tan colored particle, a good sized diatomaceous earth. It’s in My Mix from American Bonsai tools, or, if you’re in town, from me at the nursery. 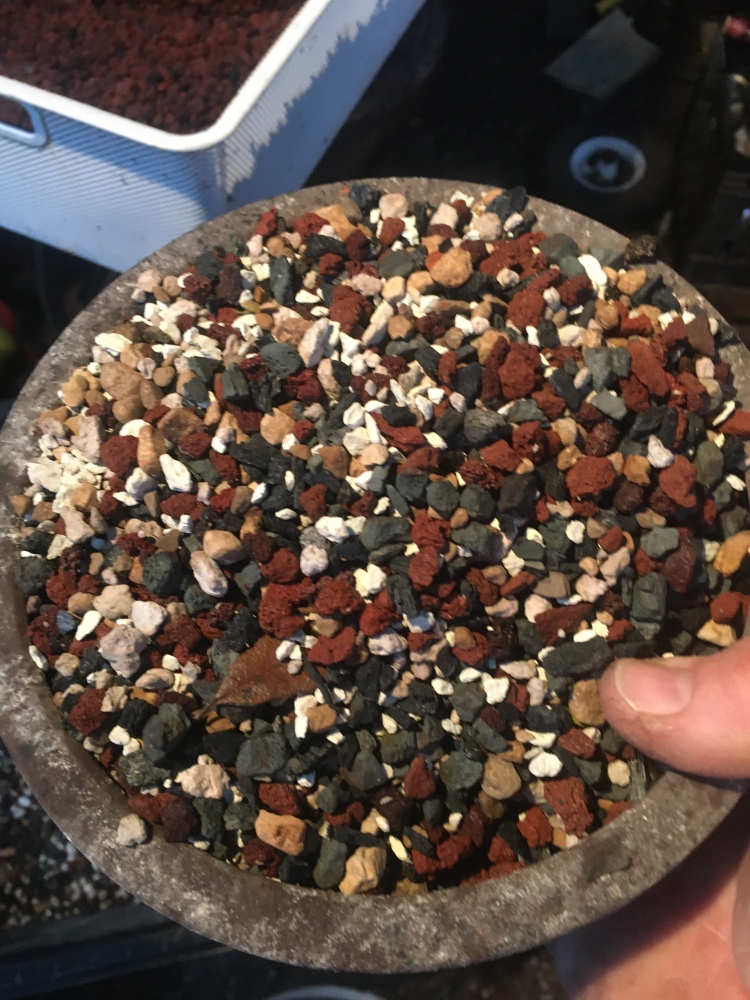 Its called the Adamaskwhy SuperMix™️ 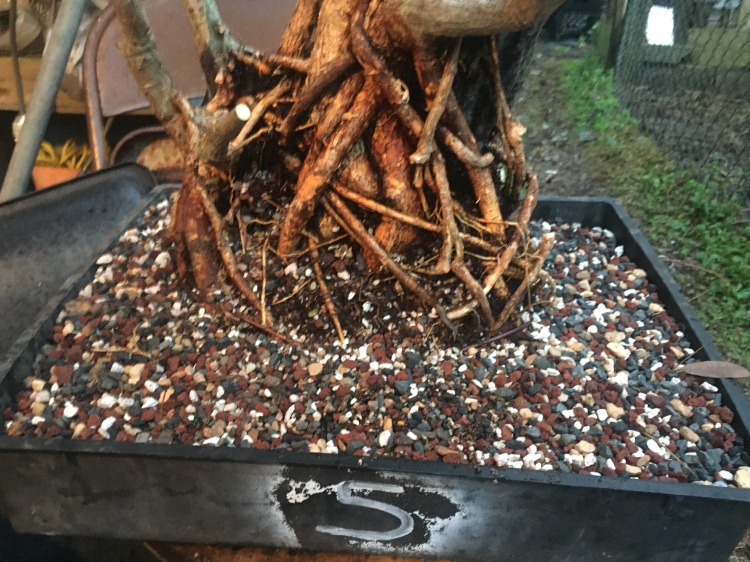 Now to tame some of those roots.

My aim is to keep the wildness, but still add some harmony. (Happiness and Harmony, that’s what a tree needs) 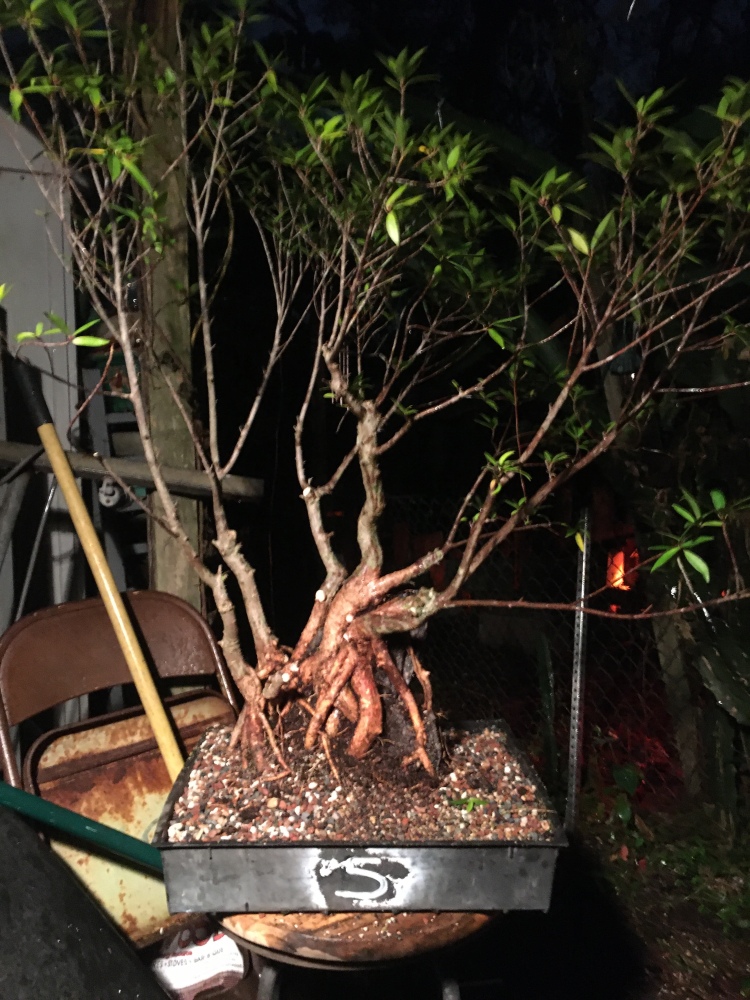 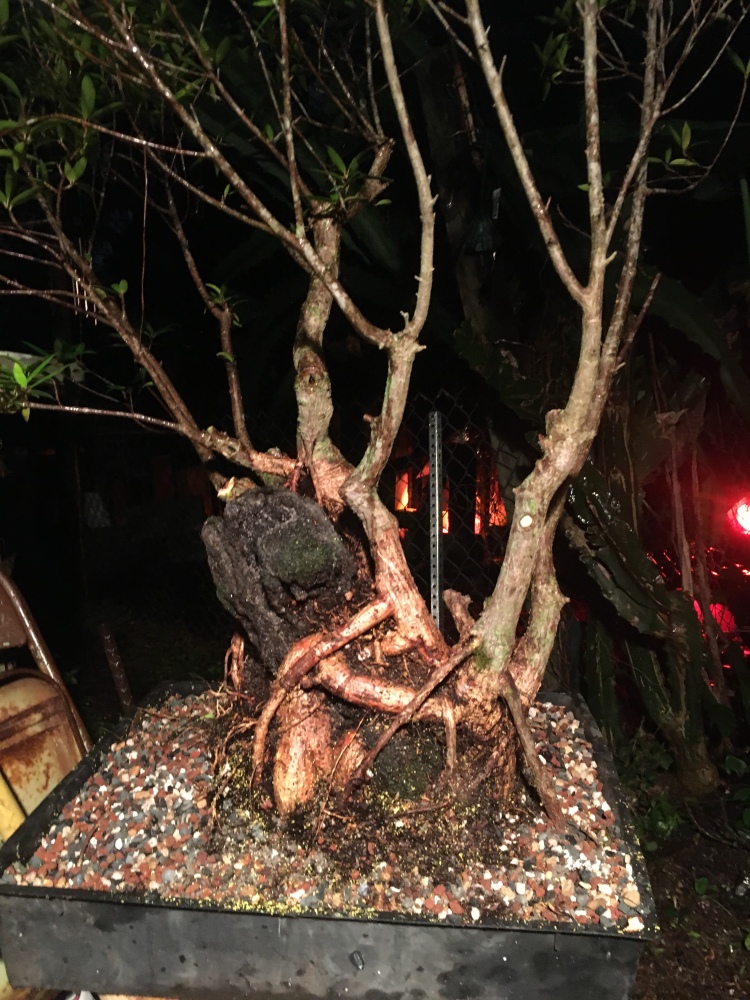 I’m beginning to like this as a front. But I’m sure the tree will change, as they always do, and the side with the rock more prominent, might become the front. 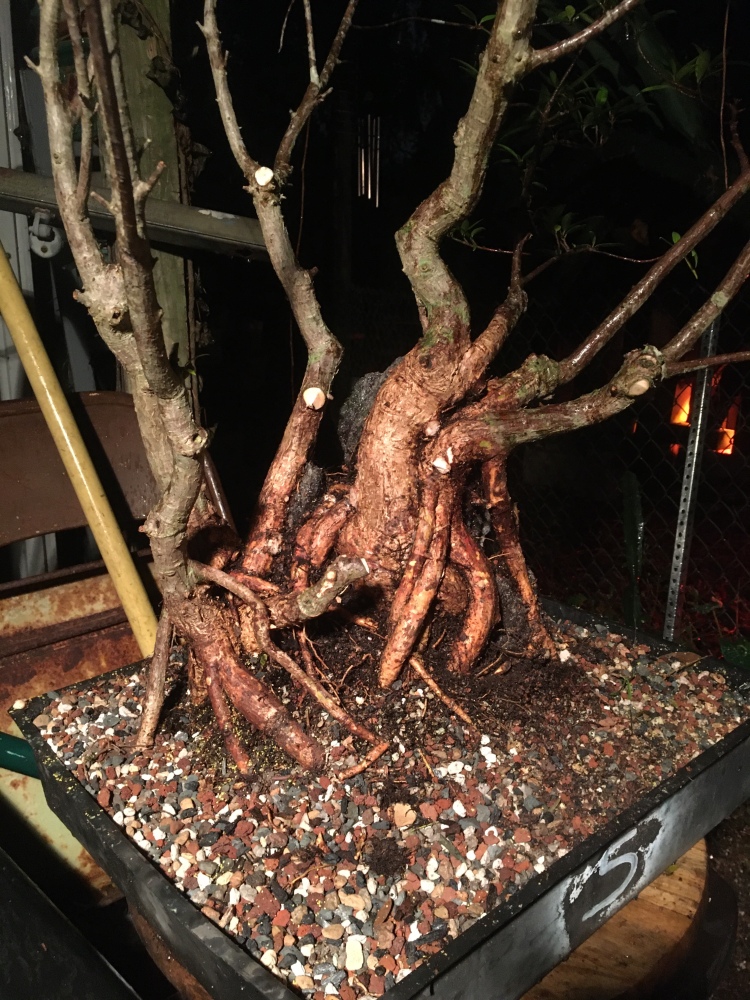 Here’s a virtual of a possible future. 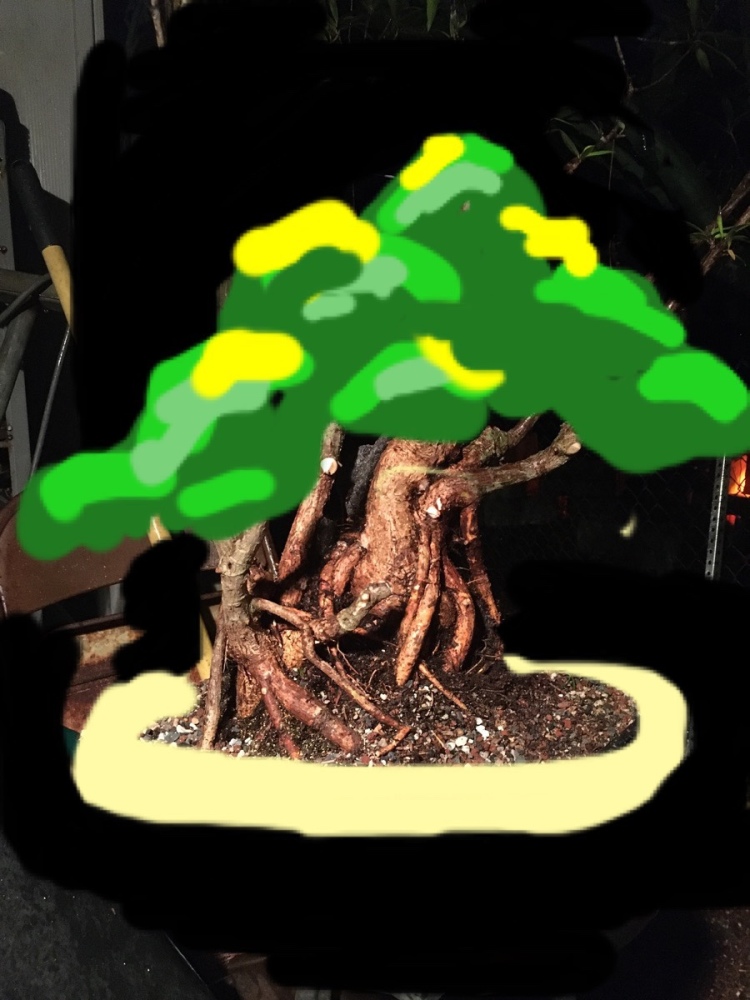 I’ll be shortening all the branches, of course, creating taper and movement, etc. but that’ll have to wait for the spring.