I just recently picked up an ilex schillings from a friend. His current situation is forcing him to cut back on his bonsai collection and I helped him out.

Here is the before from the front.
It has a good trunk and base that is
coming up from the soil line naturally. 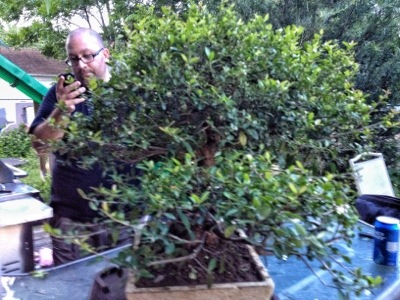 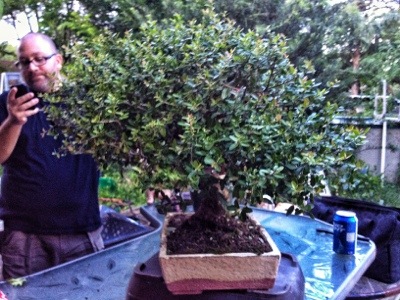 Right side. “Damn phone, why won’t you download the pics” 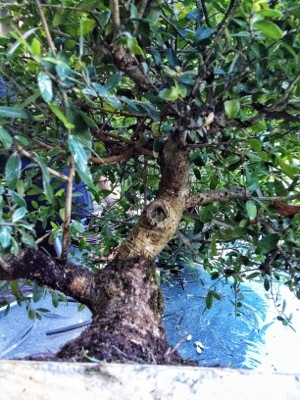 View up the trunk
My job now is to prune out what doesn’t need to be there and refine the tree. Now it is just a bush.
There are also some severe wire cuts on the upper branches 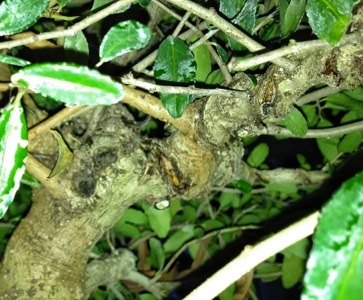 With the wire imbedded in the bark. 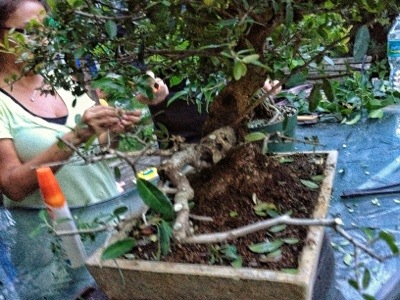 This is the bottom branch pruned. Yes. I will be that severe. Oh! Hi Wendy. 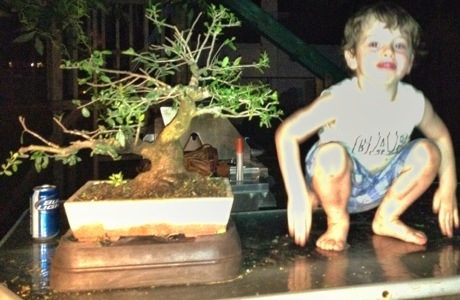 There it is all cut back. That’s my son Mathew to show scale. He’s getting ready to jump. It’s amazing how fearless he is, how fearless all children are. JUMP! 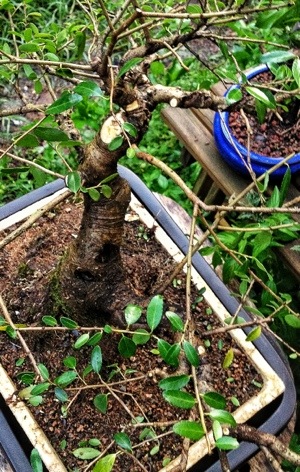 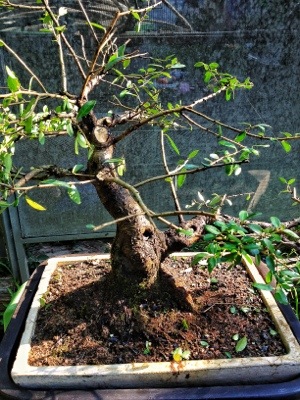 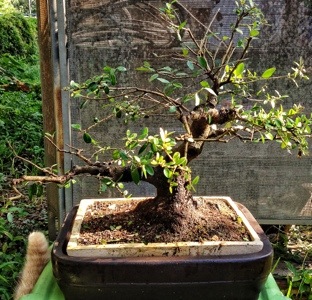 Front view. Notice on the top view where I pruned the upper branches out. 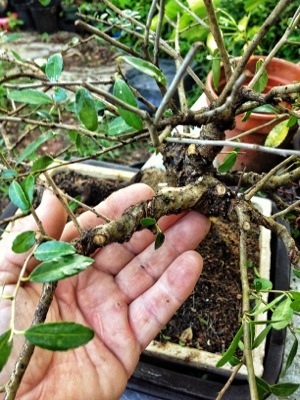 This is a front branch high up the tree. It is too thick so it will go. Plus it’s so wire scarred I don’t think it will grow out of it. 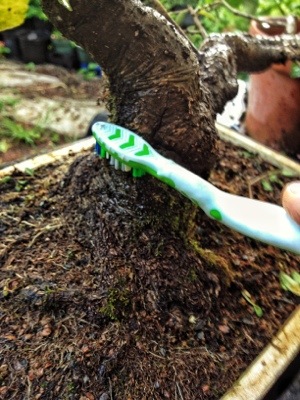 Next we clean the black algae and moss off of the trunk so the sunlight on the branches will stimulate new buds.
An old toothbrush ( or your wife’s brand new one, sorry dear) works well. 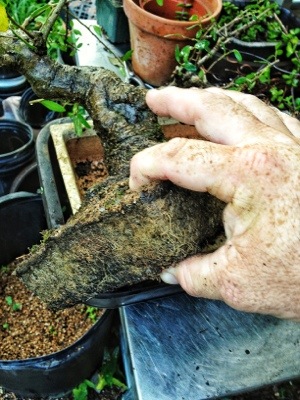 This is where I will deviate from the normal routine a bit. Most people will wire it and then pot it.
But, my experience with ilex tells me to trim the roots first. Then wire.
The reason: an ilex has amazingly brittle branches. This is why some people don’t use them in bonsai.
I have learned that if you trim the roots, then wire, it will allow you to bend the branches more easily. My theory is that this releases the hydraulic pressure, thus making the branches more limber. Just my theory. But it works. 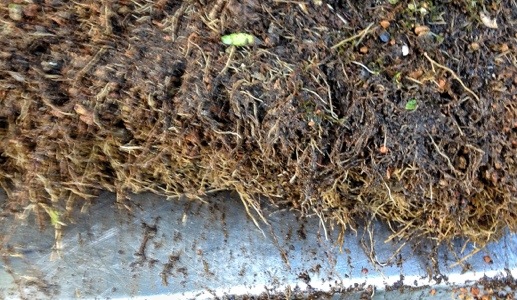 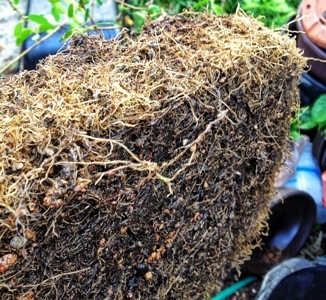 Being that it is June, I do not feel comfortable doing a severe root pruning so basically I will just be “planting” the tree in a slightly bigger pot for one year until it has recovered a bit. 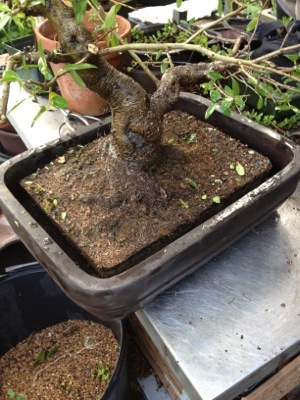 Like so. The pot is a Mica pot from Korea. Which are not available in the US anymore. They are superb horticulturally here in Florida. Big drain holes, well insulated and not that bad to look at. The pot it was in is a Taiko Earth pot, one of Rob Addonizio’s early works. 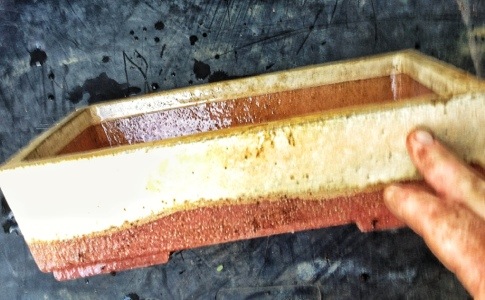 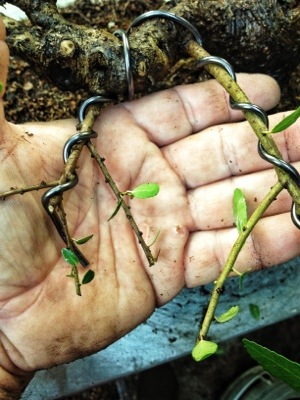 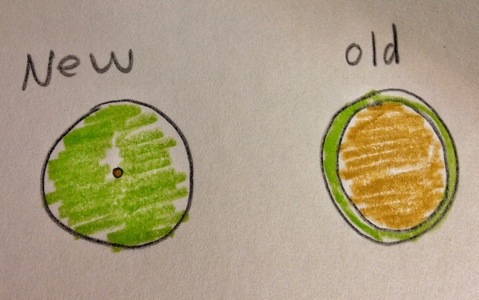 This is a cross section of new and old branches. The green represents the fluid capacity for transporting water and nutrients etc. The tan is the “woody” part. This is why new branches are easier to bend. This is also why branches die. As they get older they are not able to transport that fluid as well with this less capacity. This is why we prune out old branches periodically and use new ones.(There isn’t such a thing as a finished bonsai). It is our job to understand the horticultural mechanics of a particular tree we are working so as to continue its life. This principle also applies to other trees as well. 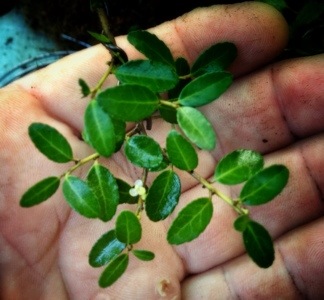 Ilex schillings do get flowers but, being male, they will not make berries. But ain’t they just do darn cute? 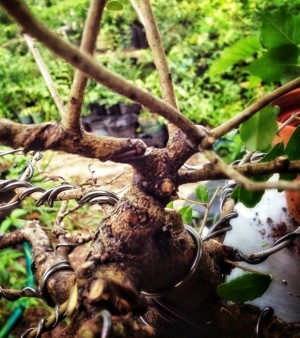 Until I eventually cut off the top this tree it will be a cyborg;the wire is embedded. Too bad the wire is not thick enough to hold it. I’d love to not have to wire over that. 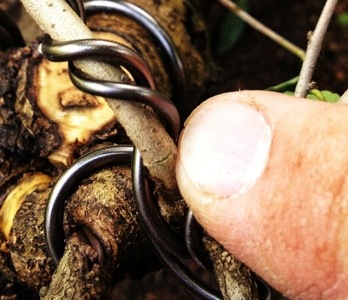 This pic illustrates several principles:
First, if you are observant when you bend you will see when the stress is just enough. An ilex will tolerate this crack.
Second, if I had looped the wire on the bend site the pressure of the wire will have prevented the crack to begin with.
Third, you can see how bad the old wire is embedded in the branch. This will not strangle the branch as you might think. The tree will self- graft and as soon as it meets it will heal over. 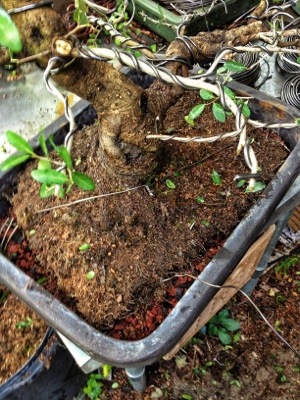 I rotated the tree by about 60 degrees clockwise. 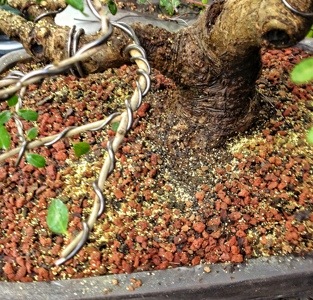 Then filled it in with a coarse, well draining soil. Mostly red lava rock. This coarseness will facilitate quicker growth. I also fertilized with my favorite fertilizer (milorganite) and put a pre- emergent weed blocker ( the yellow granules) on it. This is a handy thing when you live in Florida. 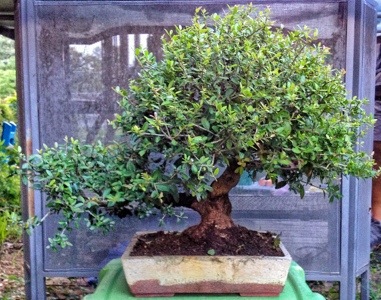 So here is the before 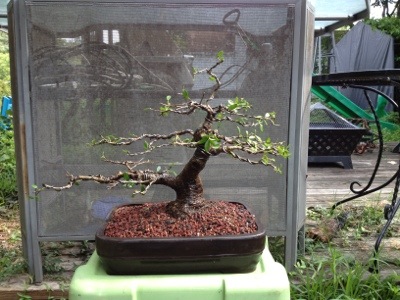 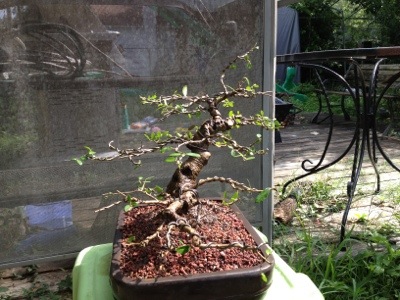 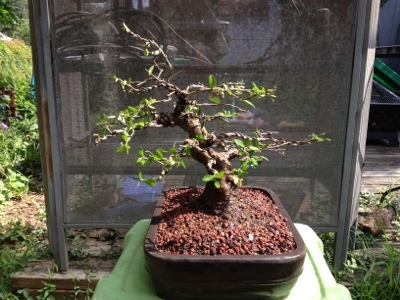 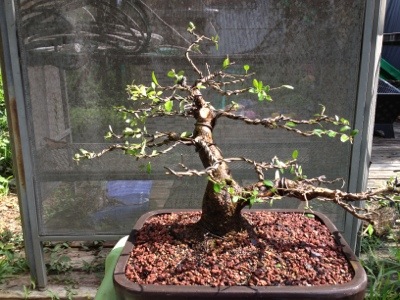 Back
I think it has some good bones. I’m glad I got it from my friend. Thank you, you know who you are.

I will post some updates in a couple of months and next year.