Why, pray tell, do I, a classic non-joiner, a rugged individualist, even (and I have been called this to my face!) an iconoclast, belong to a club? A bonsai club even? And I’m the President.
Go figure.
I will aim to, in my rambling way, present what the pros and cons are to joining a club and why I belong to one.
When I first began bonsai I had little need or desire for anyone to tell me how to do art. My attitude was, “I am trained in art , I studied painting and drawing extensively in school. I taught myself how to sculpt(Found object metal work and wood carving). I found all I needed to learn these mediums in books and by looking at photos.
I also “knew” about plants. I was (and am) an avid gardener. I collect cacti and succulents. I listened both Saturday and Sunday to the local AM radio garden shows. I was the shit!
As they say, though “Pride goeth before the fall”
My first tree was a juniper. Juniperus procumbrens “nana”. Which is most people’s first tree I’d wager. It’s been nicknamed often as a “mall-sai” or a cookie cutter tree. I’ve even told people, when they say ” I had one of those, it died”, that it was probably dead already.
I got mine at Sam’s club and I am proud to say that it survived for 2-3 years. I would trim it and fertilize and water properly. It died from never being repotted.
I do, being the excellent propagator I am, have a cutting I grew from it, though. 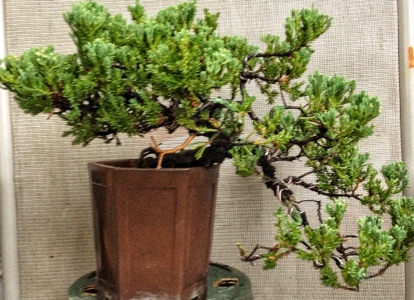 Needs a trim and some wiring. I’ve let it grow a bit to gather strength.
Anywho, it was that death that prompted me to seek out help.
There was a backyard nursery in Windermere called Bonsai World run by Ray Aldridge (I’m sure there are some of you who remember him). He is a cantankerous man(if he doesn’t know or like you), but was willing to allow me to observe him when he worked. He never gave lessons but he did comment often and answer my questions.
He was a member of the Central Florida Bonsai Club but he never attended the meetings. He said that he had attended all the meetings he needed to when he was working. He was 75 when I first met him.
To his credit he always pointed people in the direction of joining the club. I think he knew that he didn’t know it all. And he didn’t really have the time to teach( he never bought green bananas) He’s a good man. One day he just quit doing bonsai and it’s been 5 or 6 yrs since then.
I followed his example but not his advice. It took me 2 yrs of knowing him to finally join the club.
2 years of killing trees. I was book learnt you see.
The problem is, the books out there are either too old, too general, or too climate specific to be of use. If you want to see good pictures or learn how to grow from seed they are great. But I have learned (in my slow way) that each climate is different when it comes to bonsai culture.
Florida especially. This is true of gardening in general too. There’s only one gardening magazine I recommend. It’s Florida Gardening.
Being the shy person I am, it took several months to go to my first meeting after deciding to go. I remember it distinctly. I get there way too early and sit and wait. The first couple of people show up and I wander in. I look around trepidatiously for a place to sit.I have good hearing and vision so I tend to sit in the back,so I can see everyone (and to make a hasty retreat should I need to). I decide to sit next to a long haired, dreadlocked, hippy looking dude. My kinda people.

Hiya Stevie!
Anyway, the first half of the meeting consisted of “business”. The club was, under the leadership of Dan, updating it’s bylaws. I’ll tell you boy, it was exciting! Finally the artist (an artist from Canada. I’ll not name him) who was on a tour of Florida sponsored by BSF, steps up for his presentation. Wasn’t pretty. It was a “bring your own tree” workshop and this man was not knowledgeable about tropical species. Or growing habits of trees here.
There was a point when he totally dismissed this poor dudes tree (a schefflera) as not being a “true” bonsai. I believe it was that man’s first meeting too. He never came back
Why did I come back you ask?
Irregardless (regardless or irregardless; any thoughts as to which is correct? Don’t they mean the same thing?) of all these negative things I did come back.
Because of Steve,
and these people

After that meeting the club went into a summer schedule where there were only workshops instead of formal meetings. It was here that many of the good things about a club come out.
People had suggestions and knowledge to share. Trees for sale. Places to go and see trees.
I met Mike Rogers 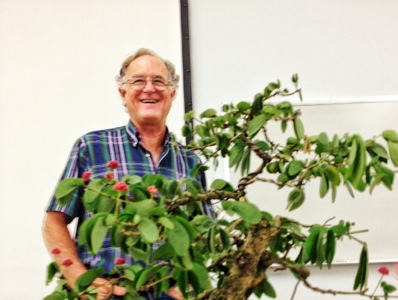 And he became an early mentor and still is.
From the club I learned about different shows and conventions that happen around my area. And learned about the various nurseries as well.
The most important things I learned were horticultural. When and why we do this, to what extent and to what extreme.
It was these things that are not in books. It is within clubs that this knowledge is kept.
A club also has the (hopefully) financial capacity to bring in good artists 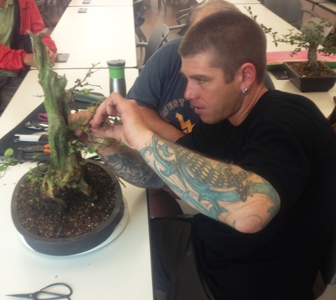 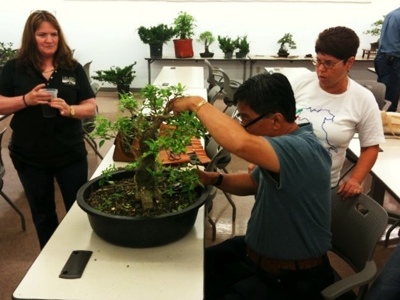 Suthin Sukolsolvisit (I hope I spelled that right).
Sometimes they bring in bad artists too. It’s often the case one learns more from them than the good artists.

We’ve even had clubs within clubs 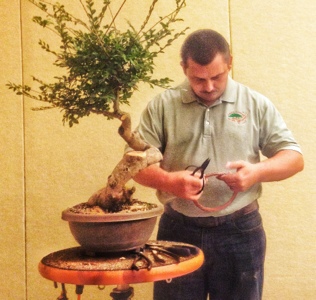 Or just be around people who share this odd passion for little trees.

There is room in a club for beginners, hobbyists, nurserymen or people who just like Sigrid’s sweet potato casserole. (yummy!)
In my club we have oldies (sorry Rick) and children

We even have room for rockstars

A club needs a pool of knowledge to share with whoever comes. But it needs good people to keep the newbies coming back.
This is why I am president. I feel that it’s my job to welcome the timid into the club when they first show up. I remember my first day. I actually had a wild notion that it was a swingers group hidden behind the guise of a bonsai club. (It may still be but I’ve never been invited to any parties.)
I try to be open and not pushy with new people. (I did say try).

I would like to thank those who have become good friends since I’ve joined. You guys know who you are. 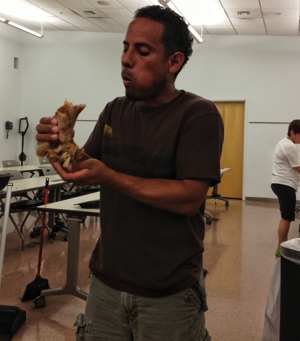 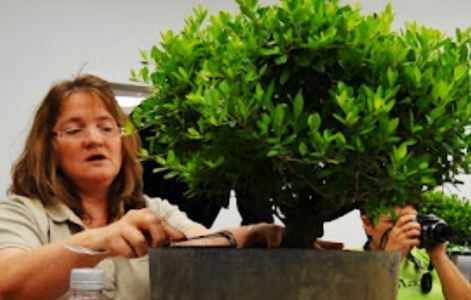 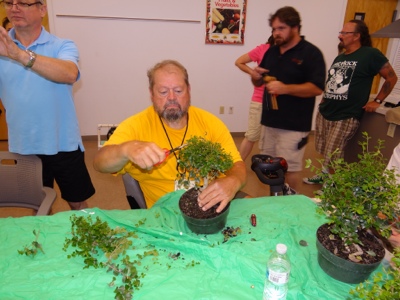 I’m still shy. I’m still,more often than not, likely to go my own way. But I will continue to be a member of the club and try to share the mistakes I’ve made. If there is one thing I’ve come to realize about life; it is easier (on the wallet) to learn from the mistakes of others than from your own.
I’ve also learned that knowledge goes against the laws of physics; it increases as you give it away.
A true teacher learns more than the student with each lesson given.
And with that I will end.

So, to reiterate what I’m trying to say (cuz I do tend to ramble on).
Without the club I would not have grown as I have. I was not “the shit”.
One of the most important lessons I learned was “You have to SEE good bonsai in order to make good bonsai”
Which means to physically be in their presence. I learned that from Paul Pikel. (It was actually his blog that inspired me the most before I even joined the club.) It is at the clubs where you see the best trees. And the best people (sometimes not, I’ll admit. I know many people who dislike me). But that ledger book is in the black.

And with that, I will end.