My friend Erik calls me a sushi snob. Maybe I am. Maybe not. I know what I like though. 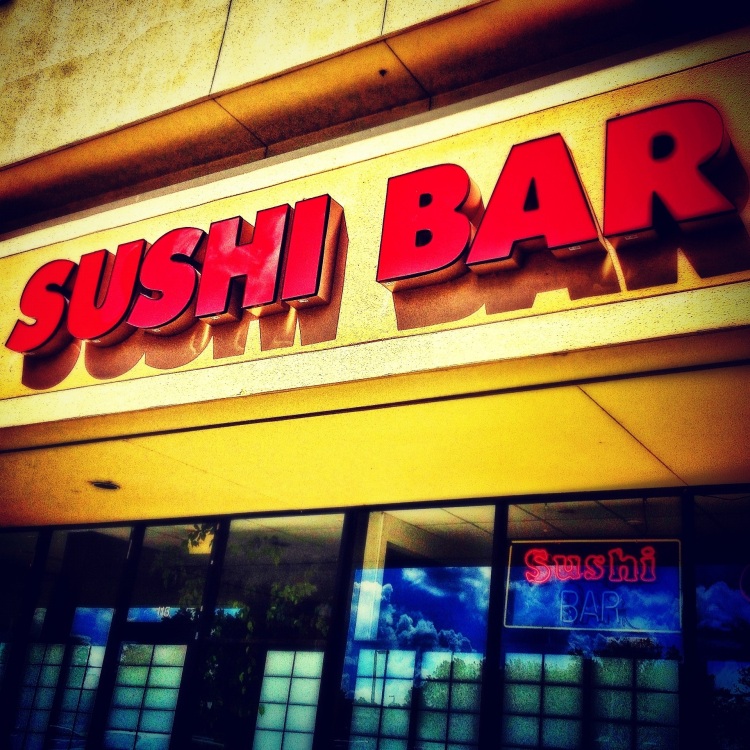 This is where I go. I am loathe to tell its location as it might ruin my little hole in the wall sushi bar.
When you sit, (always sit at the sushi bar. The chef won’t care about you otherwise. Or most won’t. My chef is nice) the waiter (you should have both a waiter and a chef. The chef can take orders but its the waiter who should be handling the paperwork and drinks etc) brings the order form and a complimentary appetizer

It is house made kimchee and sweet pickles. It is awesome together. The hot and sweet, the fresh and pungent; the essence of wabi sabi.

This is my order. 2 pieces of maguro nigiri. A tekkamaki roll and an uramaki roll. In english that’s 2 pieces of tuna sushi, a tuna roll and a roll the chef calls a “dynamite roll”; it has tuna and yellowfin tuna in a wasabi mayo, cucumber and is rolled “inside out”.
First I get some miso soup.
Traditionally, this should come last. But most places bring it first. So I’ve gotten used to eating it then.

Most miso is instant and they add water to it. Even in Japan. The brand they use here is decent. I’ve had better and worse.
First, a lesson on etiquette 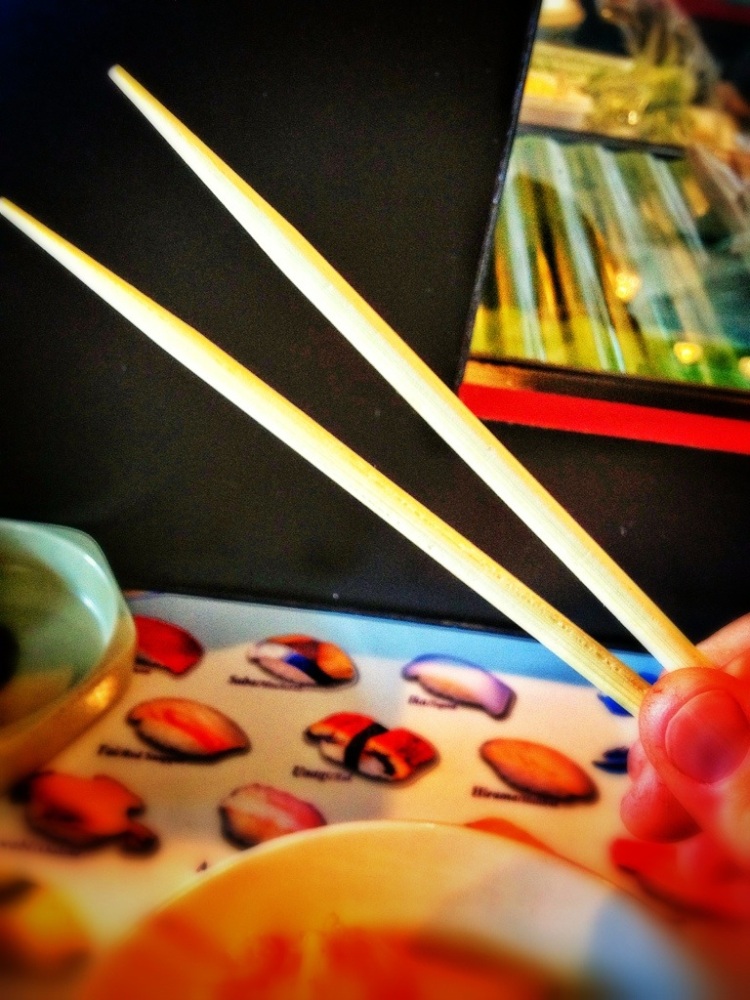 Even though you’ve seen people do it, don’t rub your chopsticks together like you’re trying to start a fire (the fish may be raw but it’s supposed to be that way). It is insulting to the chef. If you have splinters on them, get another pair (I don’t frequent Asian restaurants that offer cheap chopsticks). Don’t look like an ignorant gaijin.

I order à la carte.
My recommendation is to eat the maki rolls first. The reason: the “seaweed” (an algae that is grown and harvested in an advanced method. It’s the same stuff the English call “laver”) is dried and toasted. Crispy, even.

If you let it sit, it gets soggy (one reason to not buy supermarket maki rolls).
When you eat it, it should have a snap to it. Kinda like Nathan’s hot dogs.
My chef (his name is Ping) makes his tekkamaki in the traditional or Tokyo style.
Which means it has tuna, the rice, sesame seeds and wasabi included in the roll. This (even though Erik and his wife Andrea say I’m boring because of it) is my favorite roll. It tastes like the best steak you’ve ever had. Only at Ping’s place. Other places it’s just boring. Order it traditional style. If they look at you funny, get the hibachi instead.
Trust me.
By the way, I recommend this book

Lightly dip your sushi into some soy sauce. Lightly. Don’t drown your food, dude.
(Another digression, when you mix your wad of wasabi into your soy sauce, you’re just advertising to those of us who know [wasabi’s strength is diminished when its added to soy sauce] that you’re a wuss. If you use wasabi, put it on each piece separately. Like a man! Or a,uh,.. woman….)
Ok, tekkamaki all gone ;(
Maguro nigiri 🙂
How to eat that odd slice of fish slapped on top of an oval of rice:
First, grasp with your index finger on top to hold the fish, and your thumb and middle finger gently cradling the rice.

Like so
And put the whole piece into your mouth. Chew. Swallow.
If your chef has followed the recipe, he (it is thought that a woman sushi chef will (because their hands are warmer) raise the temperature of the fish and,as you know, change the flavor profile. Or something like that) has already placed a dollop of wasabi under the fish. Like the liquid center of a candy, the wasabi will encompass your mouth and add to the taste explosion. This is an integral part of that 5th taste sensation: Umami. Combining the sweet/sour sushi rice, the protein rich fish, the soy sauce and wasabi are essential in the experience. And it should be consumed in the right order too. The rice hits the tongue first, then the wasabi, then the meaty taste of fish and then the salty soy sauce cleanses the mouth. Bam!
Magnificent!
Next is my uramaki roll. This roll is called “inside out” because the nori is on the inside.
The sushi roll was the first “fast food”. It was meant to be eaten using your fingers and quickly. The dry outside Keeps your fingers clean. I won’t go into the whole evolution of sushi (read that book!) but when sushi was introduced into the west, the public thought the “seaweed” flavor was too strong. So they hid it inside. The rolls used to be all rolled by hand. One can’t do that with sticky rice on the outside. The man who invented the California roll used a bamboo window shade, covered in plastic wrap, to assist him in the process of rolling. Cool, huh?

So far, you’ve seen me eating with my fingers. Y’all are saying ” What an uncouth lout!” Aren’t you?
I’m merely following custom.
With the “inside out” roll though, the rice is just too sticky. Chopsticks are acceptable here. I won’t glare at you.
(According to Miss Manners, it is acceptable to eat fried chicken with your fingers and to spit out watermelon seeds. Bet you didn’t know that)
But please don’t drown the sushi piece in soy sauce. 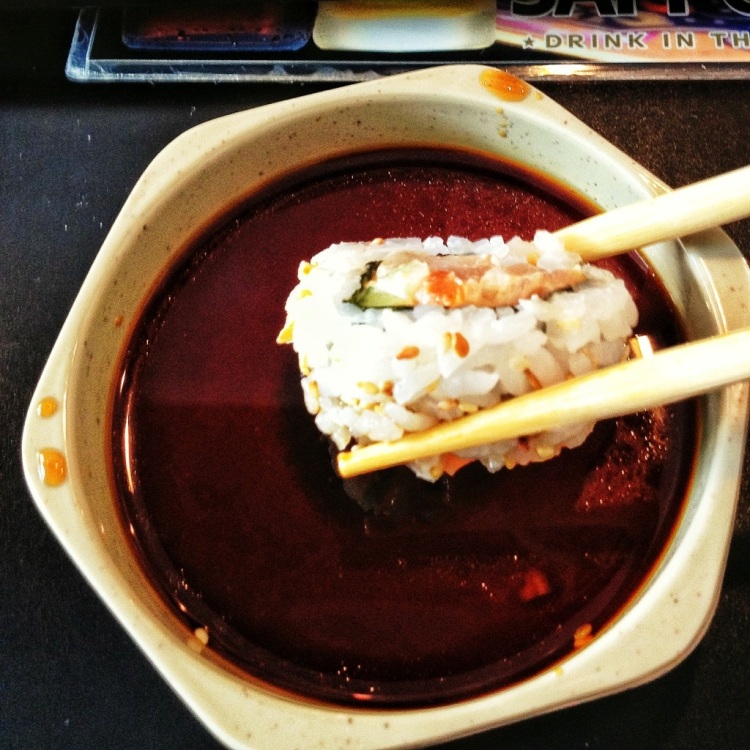 Just a dip. Trust your chef. Most of these rolls are a special recipe with just the right amount of everything in it to give you a complete taste experience. With a touch of soy sauce when you are about to plop it into your mouth. Timing is everything. Too much soy too early just turns the roll to salty mush. If that’s what you want, go get your sushi at 7-11.
Fast, fresh and perfect. That is how sushi should be.

Two lessons with this picture:
If you don’t want to use your fingers, it is acceptable to use a toothpick.
And second, if you wish alcohol, have a beer. Sake is made from rice. Sushi is made from rice. They don’t contrast well. The beer (Asahi is a good, dry beer made specifically to pair with food) contrasts nicely with sushi. Try it.
It’s the same principle of red wine with red meat or peanut butter with chocolate. Or Budweiser with chocolate cake.

This is tuna. If, in the course of your meal, you don’t see your chef cutting fresh pieces off of a slab like this, your chef is mishandling his fish.
When you cut a piece of fish, the air immediately begins to oxidize it. This changes the flavor. All the fish in the case should also be wrapped tightly with plastic wrap (the plastic touching the surface of the fish) for this same reason.
Pings fish always tastes fresh. Fresher than anyplace I’ve been, even the most expensive sushi bars. There is no comparison. 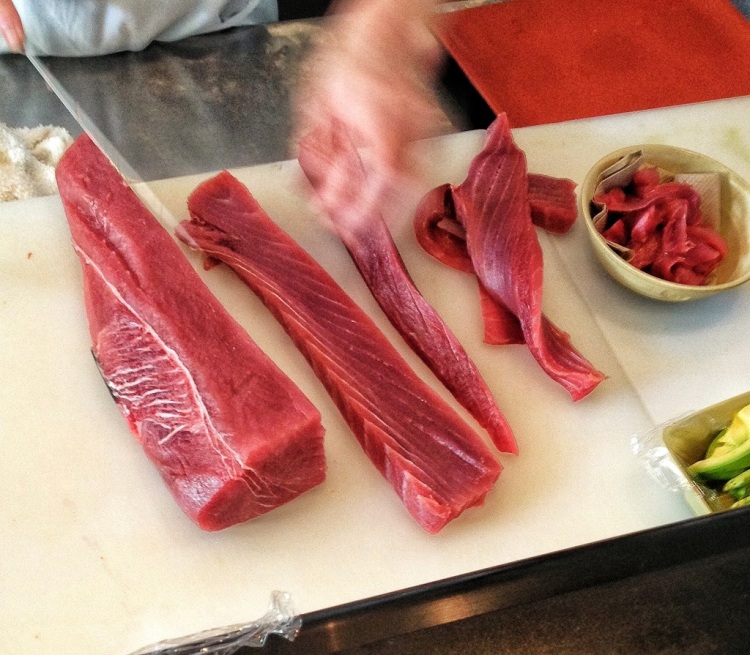 There are different cuts on this slab and Ping knows how to separate them. Some for spicy tuna, some for nigiri, sashimi etc. The chef should be doing this quickly too. Air is bad.
So, my avid audience, what is the name of this establishment? Should I tell you?

There it is. I should add, I am not getting any gain from this post at all.
Ping actually makes sushi for many of the high end hotels in the area who then pass it off as their own.
Hence the delivery truck.
Also, if you go for the Chinese buffet, it is adequate. His real specialty is sushi.
Although the Chinese takeout is better than average.
So, does all this make me a sushi snob? Maybe. I know there are a lot of people out there saying “ewww…you eat raw fish!” And others who think I know absolutely nothing about sushi.
Next time you’re in town, though, give me a call. If you buy me a beer, we’ll go get our sushi fix on. And then you can pass judgement.