I warned ya’ll that I had a flattop ilex in the works. Here’s how it came to be:

In the beginning, we had some small yamadori that needed collecting.
T’were growing amidst the roots of a mighty live oak and friend Nick called me hither and said
“do ya wanna get ’em?”
I did.
Growing in the roots of the oak, the ilex’s own roots were not very good (greedy oak). I didn’t actually expect the ilex to live. I was subsequently loathe to cut them back too much. We collected maybe 5 or 6 I think. He kept the better ones and I got what was left.
Here we are now. 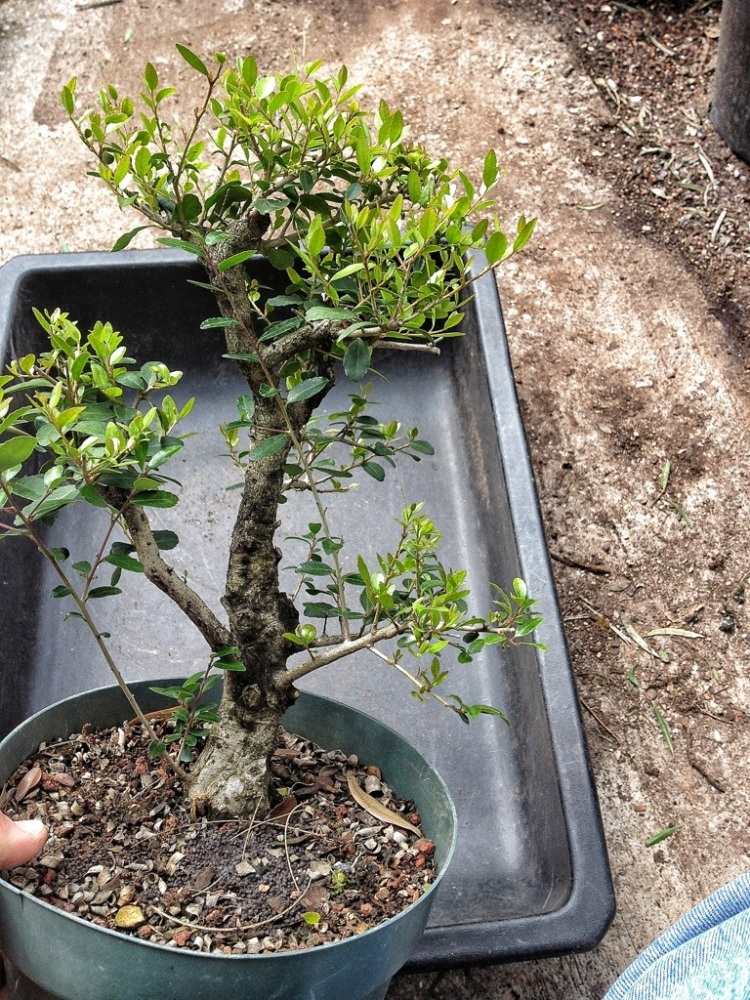 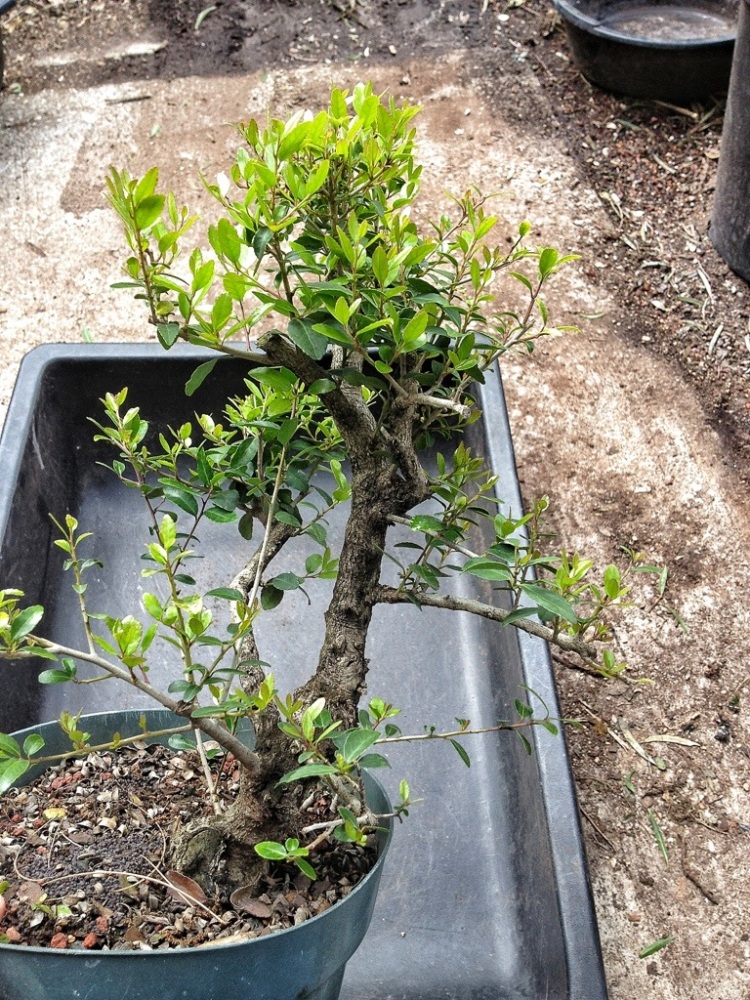 Kinda unremarkable.
My original plan was to let it grow and then stub it back to make a little pig (that’s a true bonsai style…look it up)
But….after looking at it for a year or so, I have a plan….
Which you might know already if you paid attention and read the title, I guess.
Anyway, I’m glad I did not cut it back to a nub.
I like this branch: 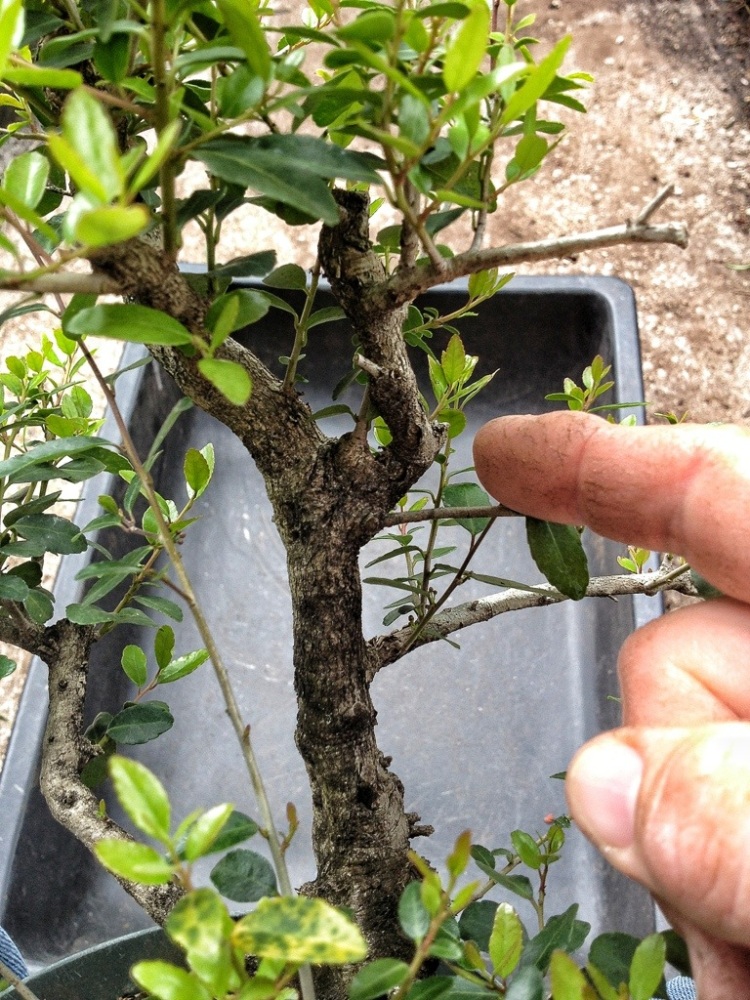 And this bend in the trunk is cool too.

And the base (not much of a spreading nebari like a maple but this is a collected tree) is decent: 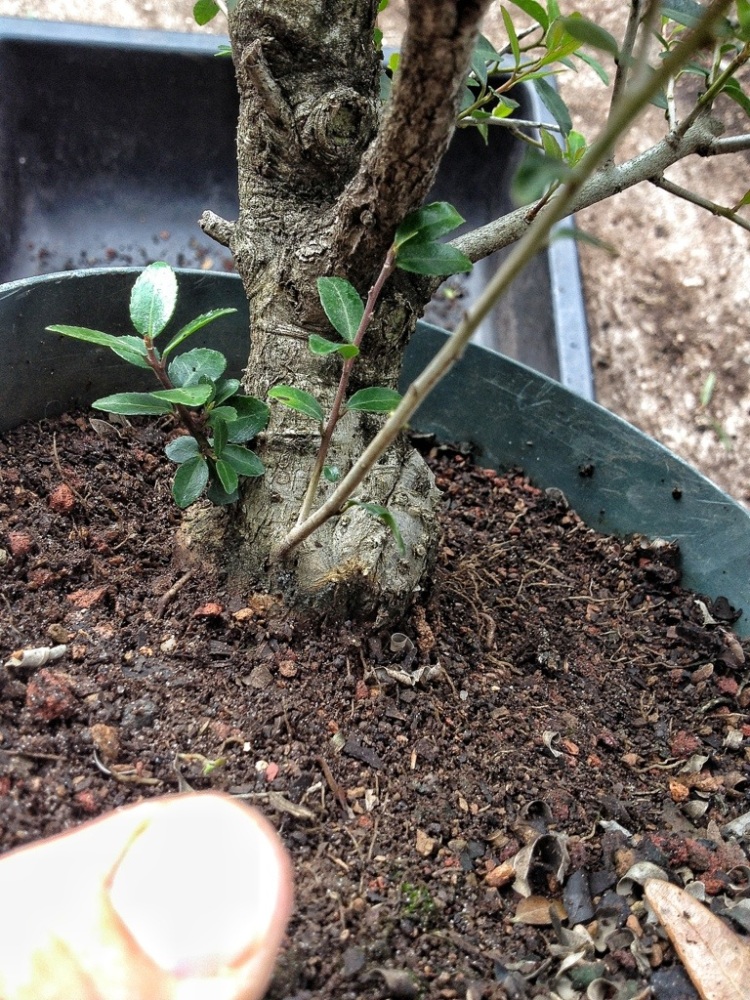 Since this will be a flat top I’m going to remove the bottom branches.

It has subtle and graceful line. It’s sweet and refreshing, almost like a spring rain.
A little wire..

And before I get the emails about how loose the wire is, I did that on purpose. Look up Mary Miller (www.bonsaimary.com) and “air wiring”.
Anyway,continuing on.. 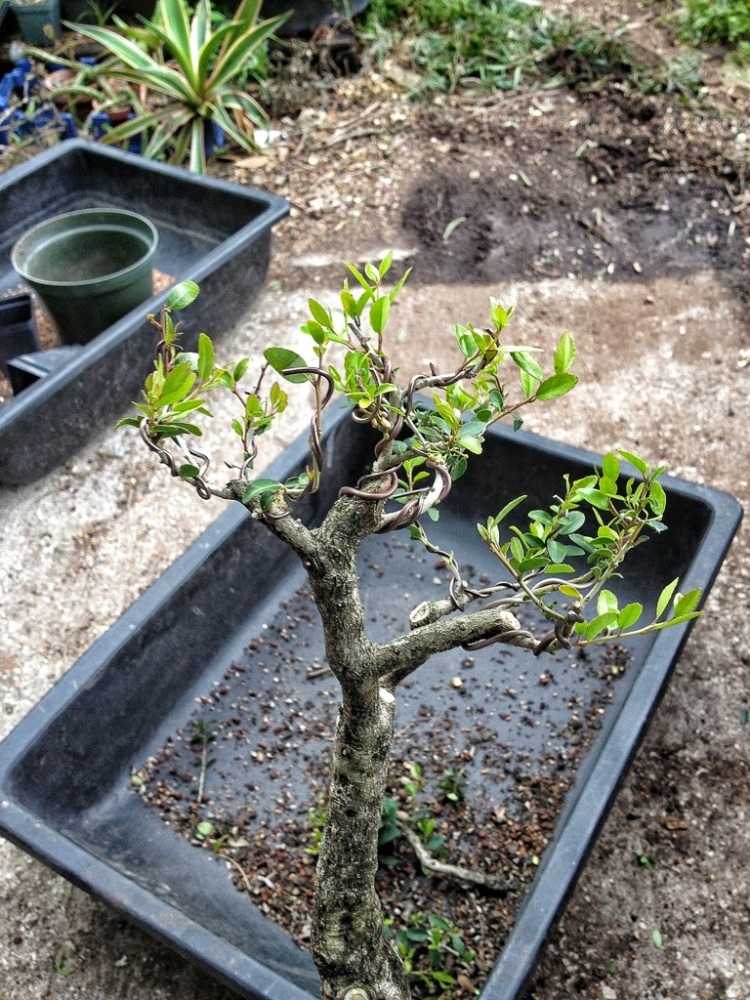 The characteristics we look for with a flat top are: a series of V’s and U’s that grow up and create a, uh, flat foliage pad at the…a..top. 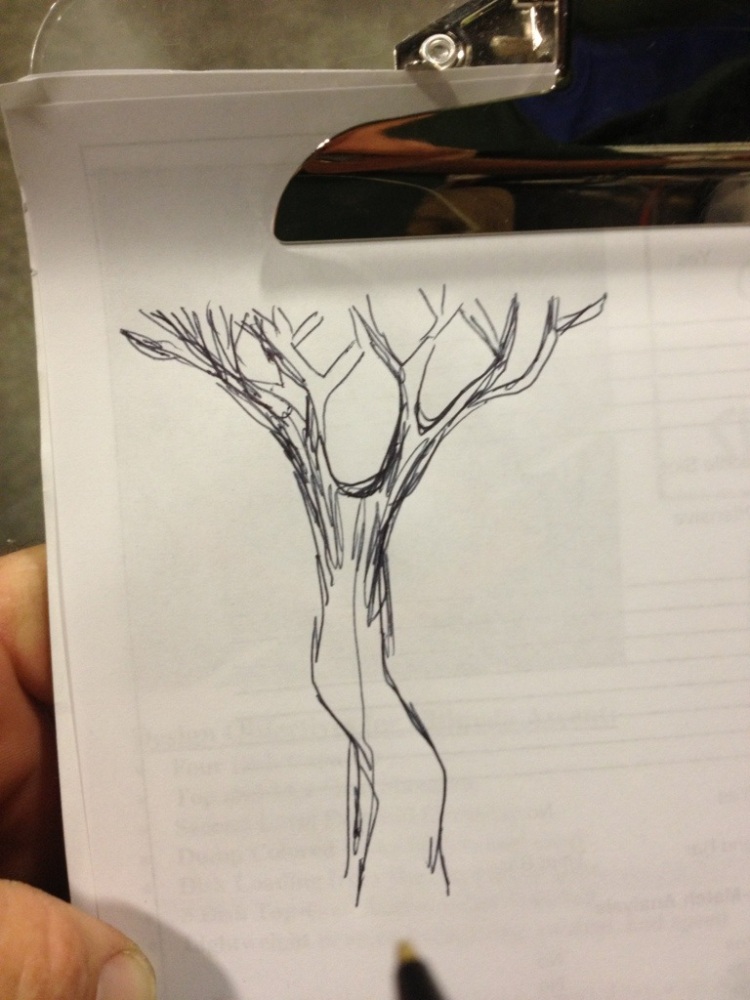 Cypress trees are good examples in nature to look at.
The flattop differs from the pierneef style exemplified by African savannah trees

Which could be described as an open-umbrella style. It would have a rounded top.
I could go either way with this tree

Let’s out it into a pot and see how well the roots have developed. 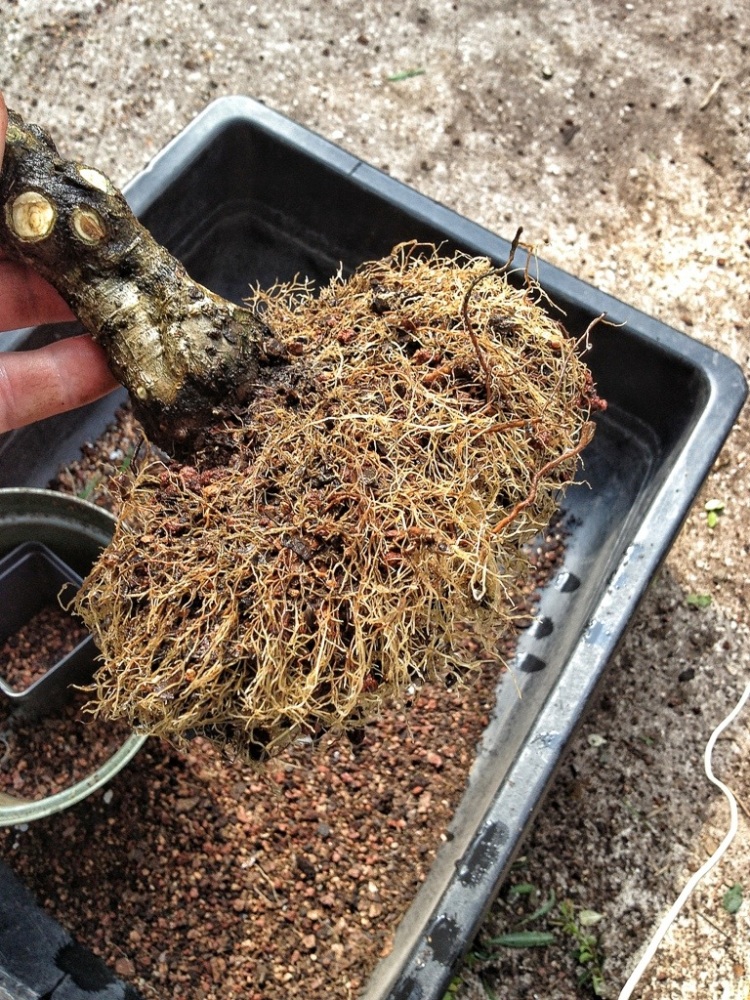 Well, that’s a surprise!
A little wash and trim

And we’re ready for a pot.
Those roots are very well developed. When I collected it, I used a bonsai soil based mix with a little more pine bark than usual; I guess that did the trick. I am terrifically tickled with these roots. Really. 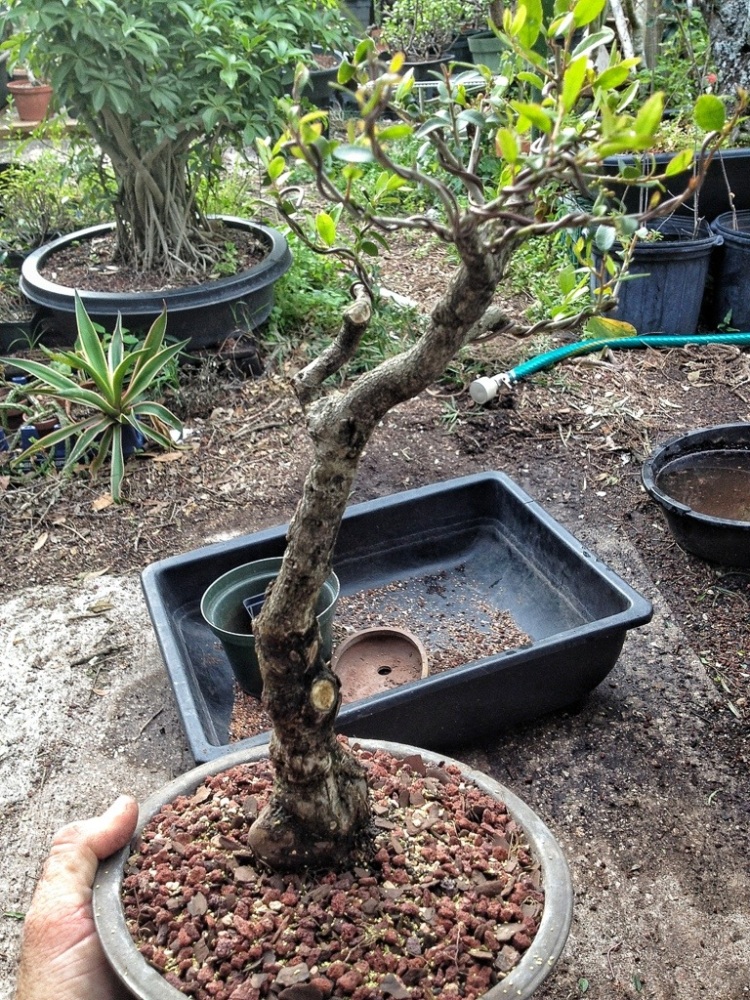 One more picture of that amazingly natural branch

And now some views. This kind of tree will have many possible fronts and I’ve wired the branches to facilitate this. 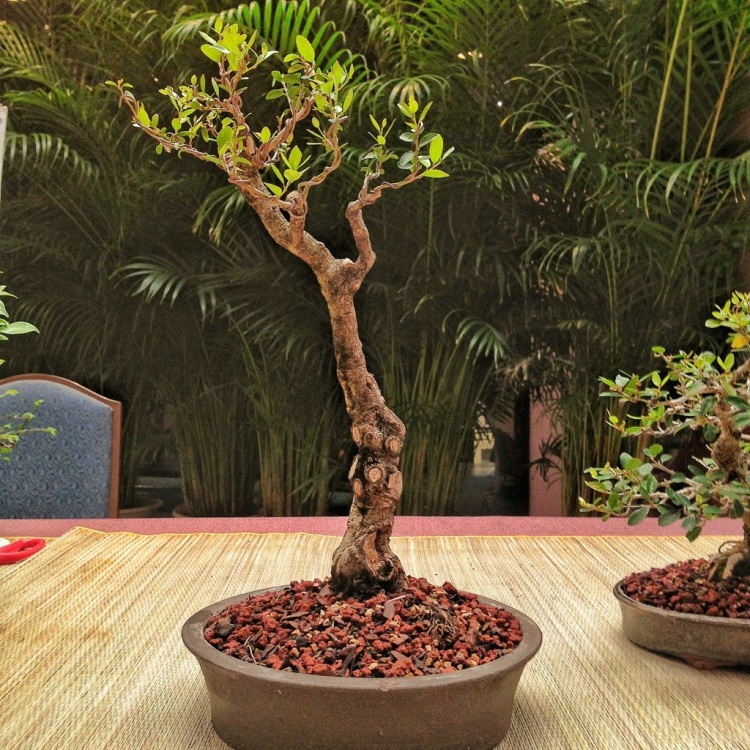 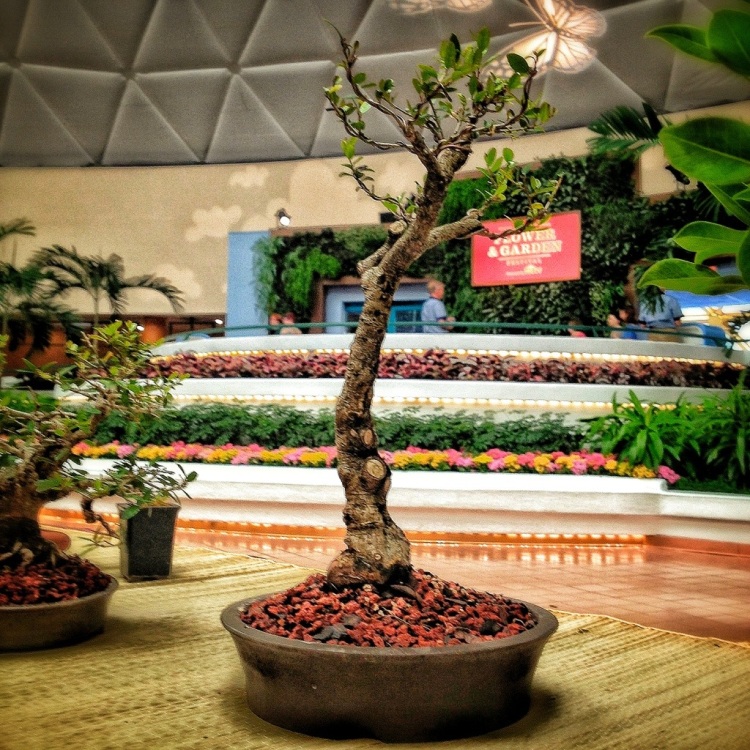 A couple of sketches for you too 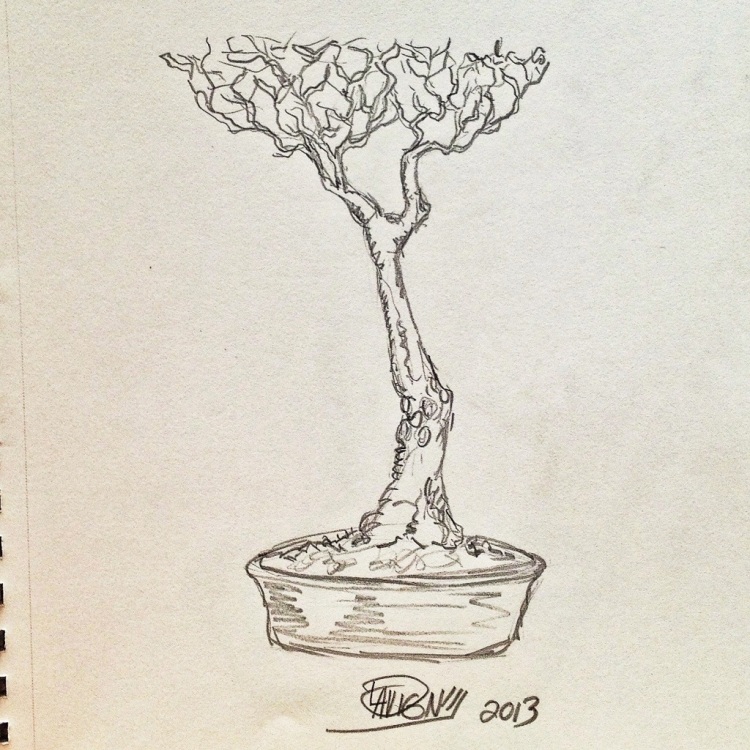 This has gone from a so-so tree to one of my new favorites.