Look at them.
They’re tempting, aren’t they?
This is the tree that seems to be supplanting the juniper as the official “mallsai”
We call it the “ginseng” ficus, although
it really has nothing to do with ginseng. I believe it’s just a seedling ficus microcarpa that has been treated, horticulturally, to look as it does.

Why do I believe this? I’ve grown one out and it’s developed a standard, ficus-ish trunk

See?
So how did I get there?
First, watch this music video I made so there’s a sound track running through your head.
Got it? Good.
My discovery was somewhat accidental, actually.
I picked up two of these ficus at The Walmart about 3-4 years ago. I got them for $1 apiece (believe it, or not) on the clearance shelf.
They were in 4 inch pots. One I put into a shallow red clay pot and put it up high.
Here it is today:

Quite a difference between the two.
The other I put into a black plastic, 3 gallon nursery can and set it on the ground.
And this is it today

Why did one grow so much better than the other?
Oho, boyo….you’ll have to read on to find out.

Back at the big box store I pick out the best of the bunch.
Which is not this one 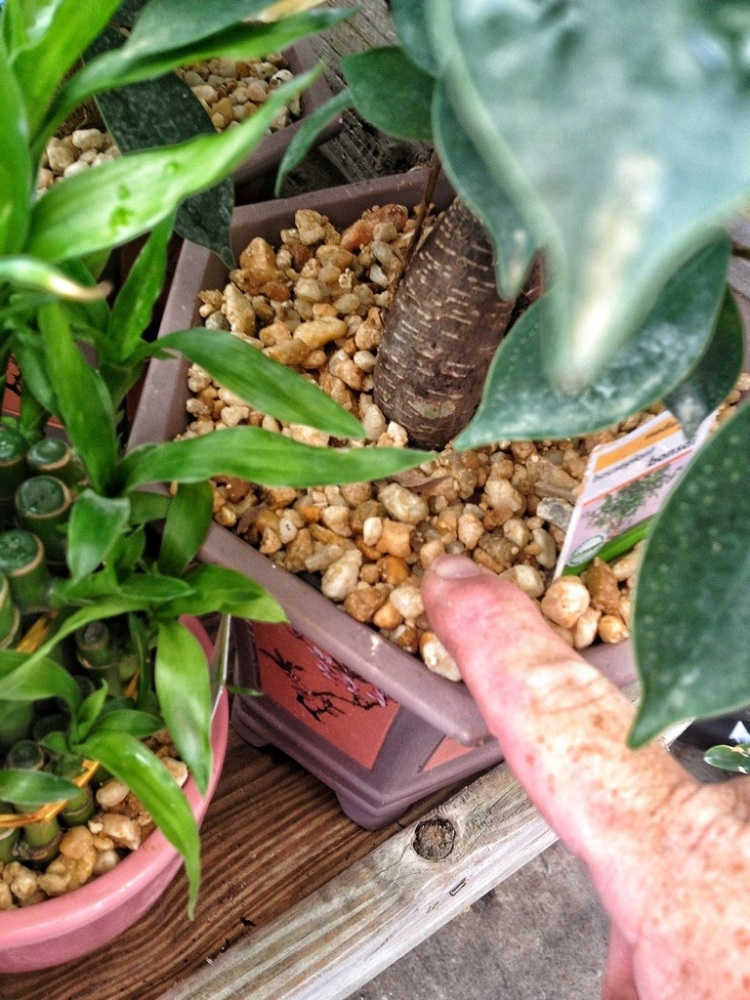 This one looks good but

I’ll get this one 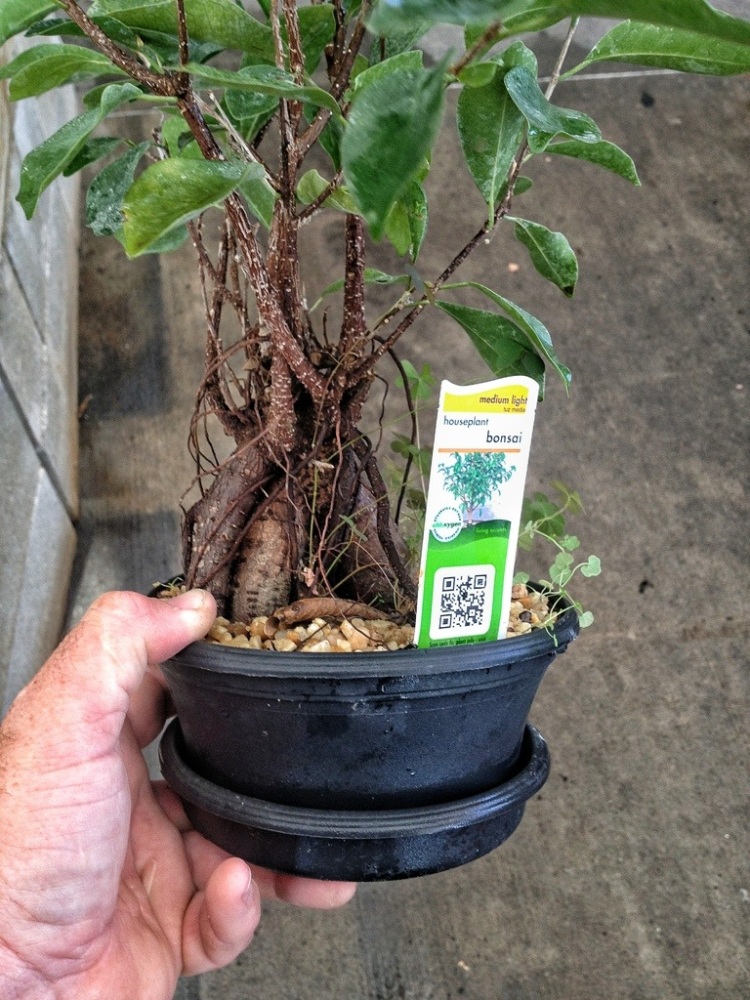 What criteria did I use in choosing which one I wanted?
The aerial roots. As they thicken they will fuse with the trunk and speed us on our way to trunk-ed-ness.
Let’s get back to the studio nursery and begin:

First, take it out of the pot.

The funny thing is, the pots probably cost more for the importer than the tree

I paid $10 for this one retail.
First I’ll remove the glued on rocks

The textures a bit off though.
Next, I rake out the roots 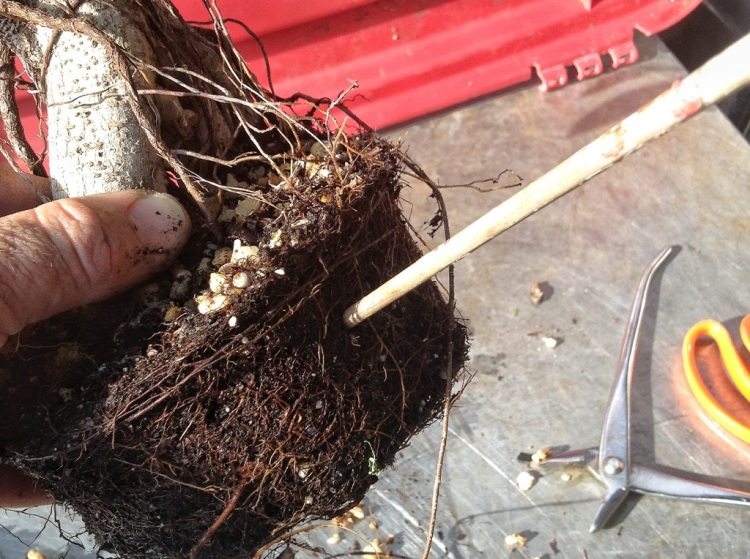 But I’m not going to cut them.
Why? You’ll see soon enough dear friends.
Next, I take these tangled roots 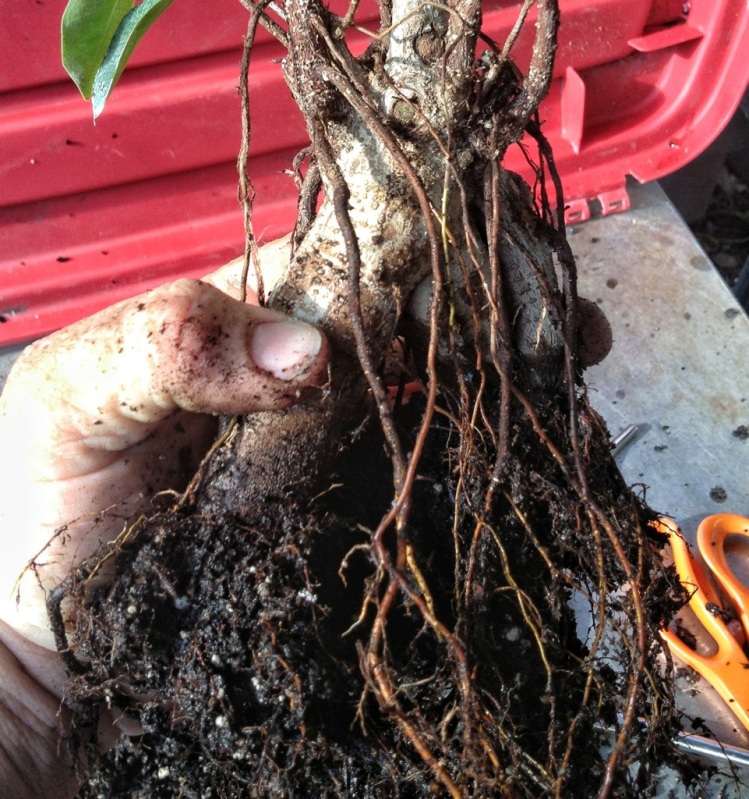 Clean up the top.
When the grower grows these trees the main shoot is allowed to grow.

Then they make one cut 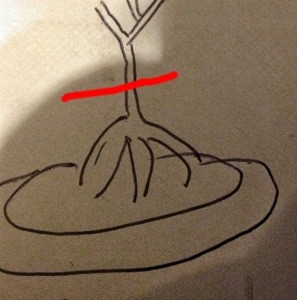 And allow the tree to grow out again

With this variety of microcarpa though, dieback tends to happen.
This was the original trunk that was cut back

It is just about all dead.
So it goes away 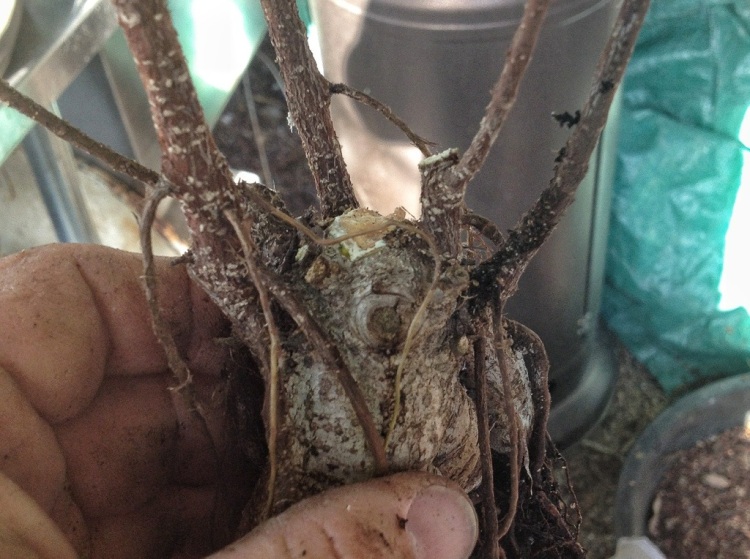 The next step is planting it in a wider, deeper pot. And now you will see what I do with those long roots..any guesses? 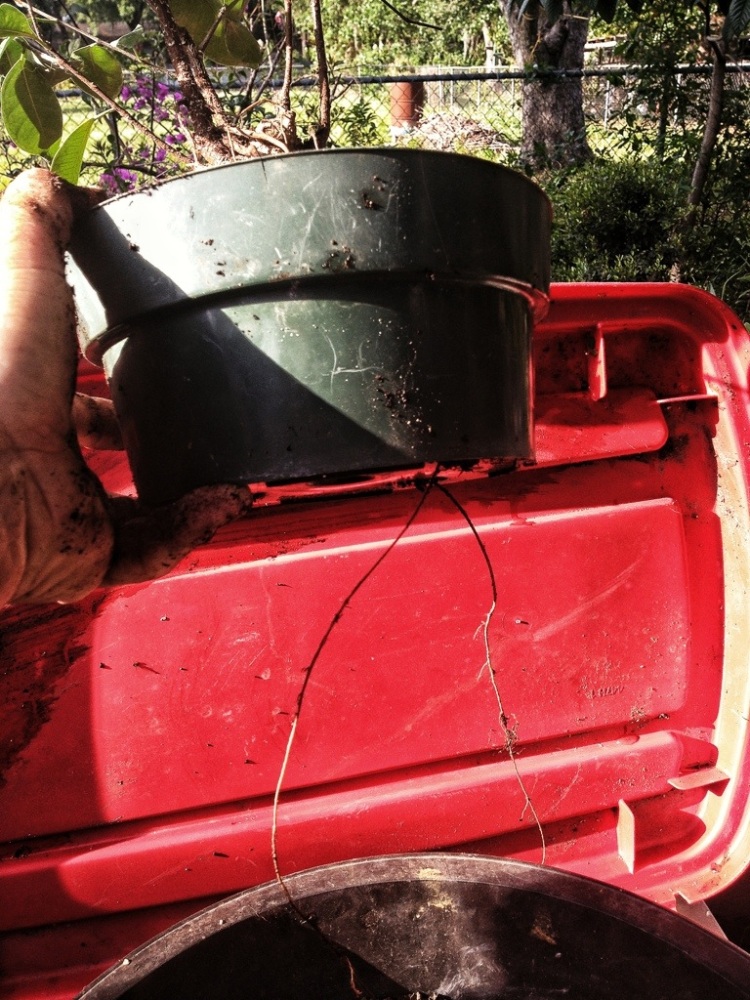 I threaded them out through the drain holes and I’ll try to reproduce what caused the accelerated growth.
It was the roots growing into the ground.
A little rearranging of the aerials 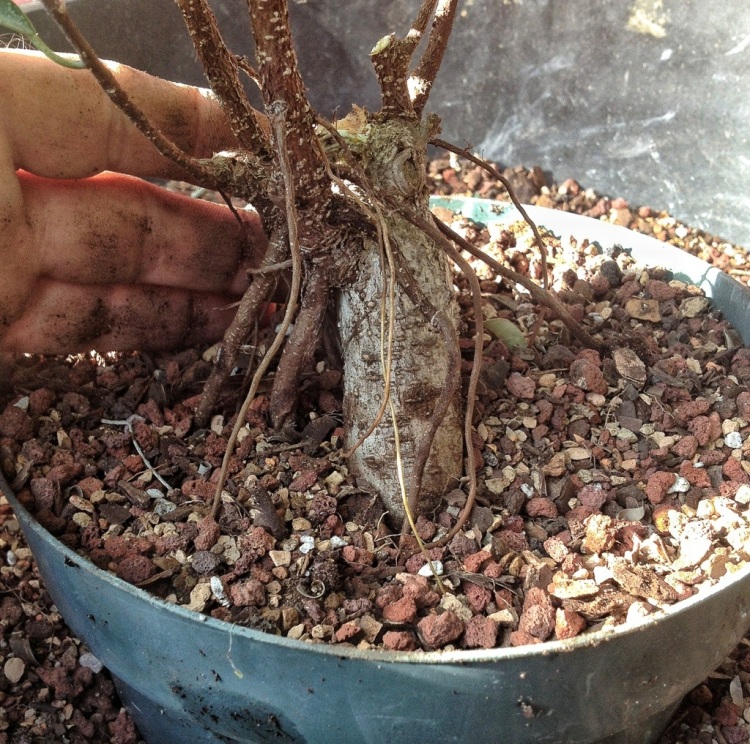 And, normally, all my plants are off the ground but this one will just sit there, roots tucked under it, like a supplicant, or a seer. 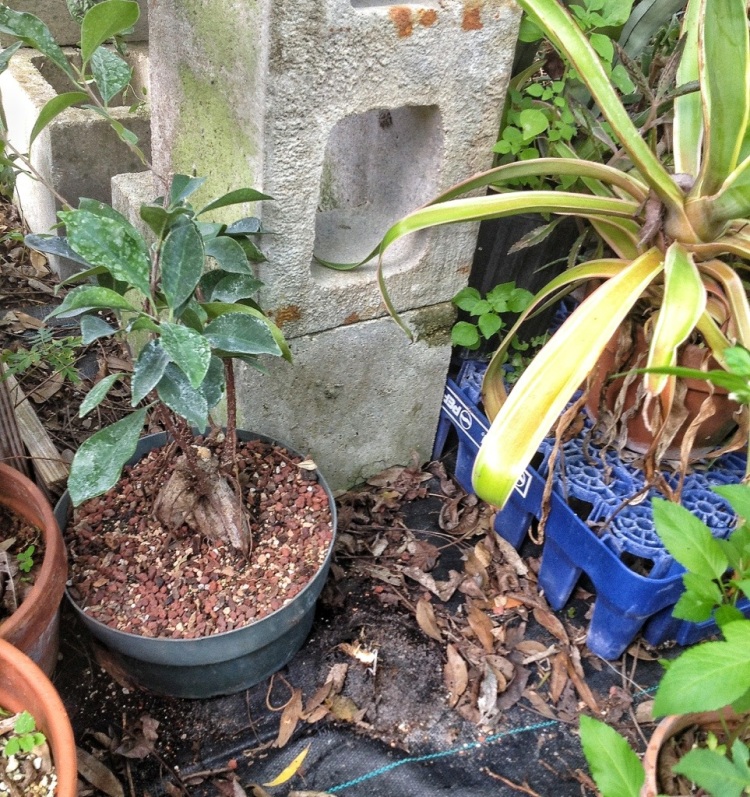 And now we will wait……

This ficus was given to me.
It’s grown out some (not in the ground so you don’t necessarily need that step)

So the trick is just unchecked growth and you’ll eventually get a tree-ish form.

Back to the big one.
Now, five years later, we will begin to develop this plant into a bonsai. 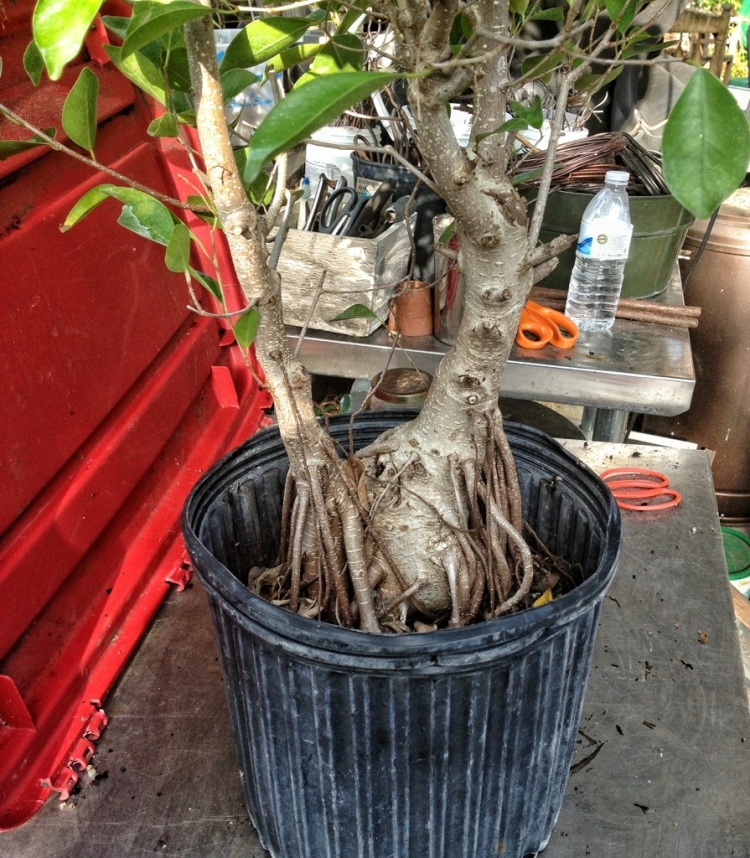 Since its had mostly unchecked growth (I do chop all my ficus back to a line in the summertime) for so long it has no branching that is usable. What do we do?
Say it with me loud! I want to hear from you up in the balcony and way back in the nosebleed section!

TRUNK CHOP!
First though, we will chop the roots.

I have heard so many times I can’t count that its not “correct” to chop the top and the bottom of a tree at the same time.
This is true of many kinds of plants. But a ficus is not one of them. It actually stimulates growth. The mistake people in the temperate parts of the world make is they believe they should repot a ficus in the winter. This tree should not be repotted unless the nighttime temps are above 60 (allowing that you are growing it outdoors) and/or the tree is actively growing.
And how can this be? For he is the Kwisatz Haderach! Sorry. Channeling the Dune movie.
There’s been a lot of talk from the Japanese trained apprentices saying that the “strength” of a tree is in certain parts of a plant; i.e the growing tips of a juniper.
I think the strength of a ficus is in the trunk.
I’ve seen Jim Smith chop a ficus (that would sell as is for $500 in the rest of the nation) to the trunk (because the branching was all wrong) and saw off the bottom and think nothing of it.
Shit, I’ve done it.
I have yet to kill one.

Back to the roots
A little untangling

And some root raking

Although it could go right into this pot 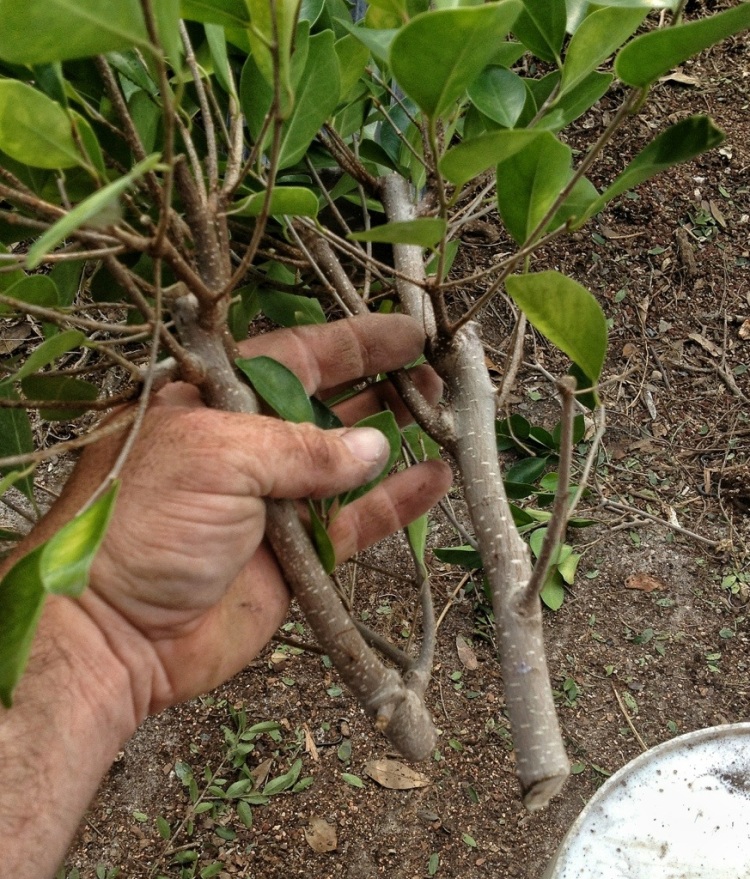 These are too big to throw away, lets make some cuttings. Here’s a trick:
Take said cutting and split the base

Take a twig off the same plant

Insert it into said split

Stick into your favorite rooting medium and, as the roots are thrown off the bottom, you will have the start of a nebari already.
Back to our tree-
Into the training pot with good bonsai soil

(In fact, in honor of one of Reddits redditors, small_trunks, who gave me the idea for this post, I will use a soil that incorporates diatomaceous earth as one of its components) 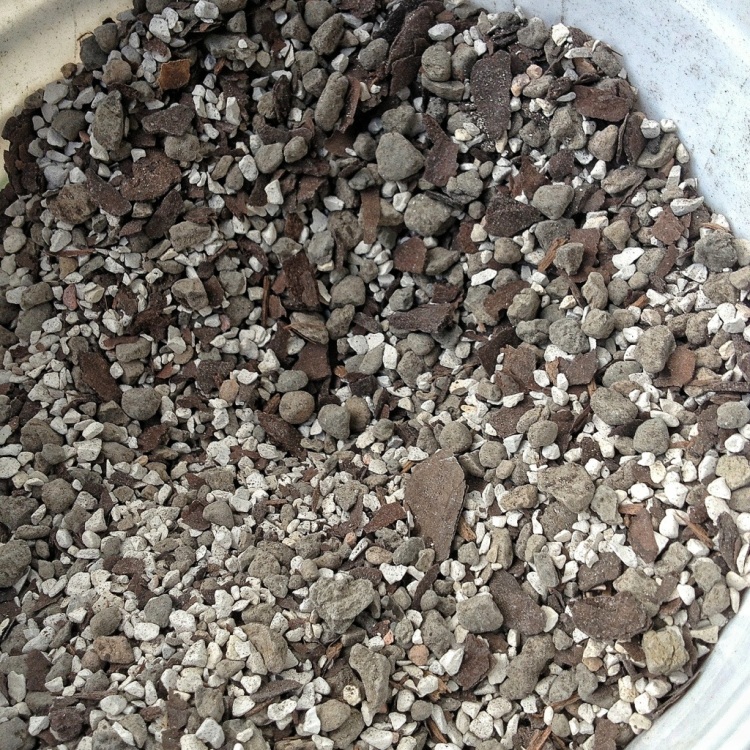 And this tree will be put away to grow too 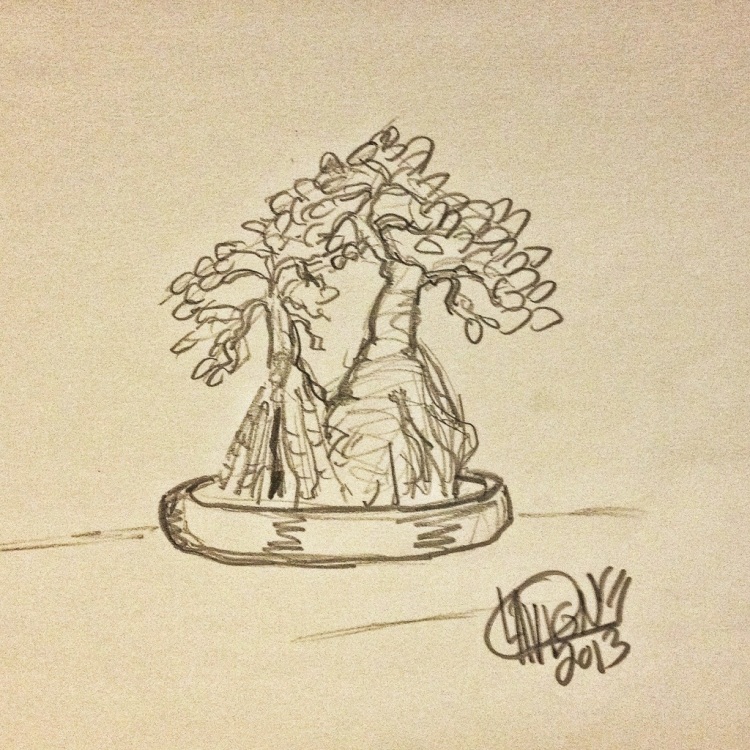 “Wait!” You say?
“The trunks in the drawing are way smaller than the actual trunks you left”
They are.
Do you remember, on the box store tree, that this plant is prone to die back?
I left some trunk in case that does happen 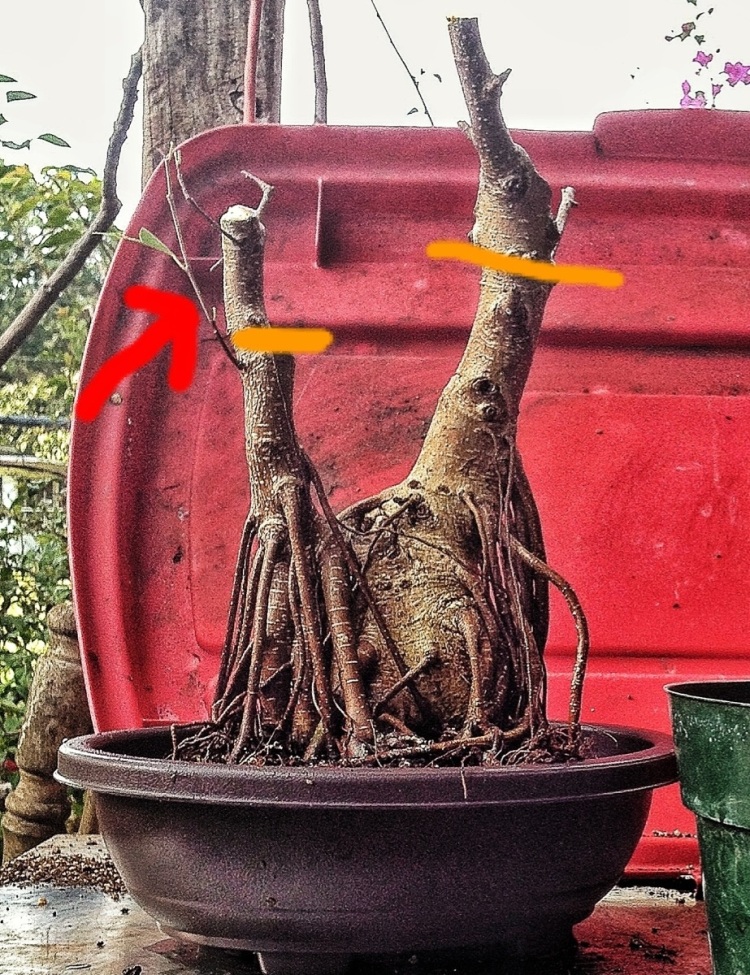 The red arrow points to the apex on the smaller trunk and the orange lines show where I want the final chop to be.
Now we wait.

And in case you skipped the video I linked to earlier, here it is again (ginseng ficus shanty)
Enjoy, comment, share!
And most of all, don’t take this Art too seriously.
Laugh, smile, have fun.
You could be digging a ditch somewhere.