Previously known as pithecellobium tortum, chloroluceun tortum, the Brazilian Raintree, was once called (by Ben Oki) “no good for bonsai”.
I am quite sure that there are some out there who say this today.
Erik Wigert, Nacho Marin, Allen Carver and many others have proven them wrong.
I have some humble ones to work on today and to share.
This is my oldest one (when I refer to age I am always referring to how long I’ve had it and how long I’ve worked on it) 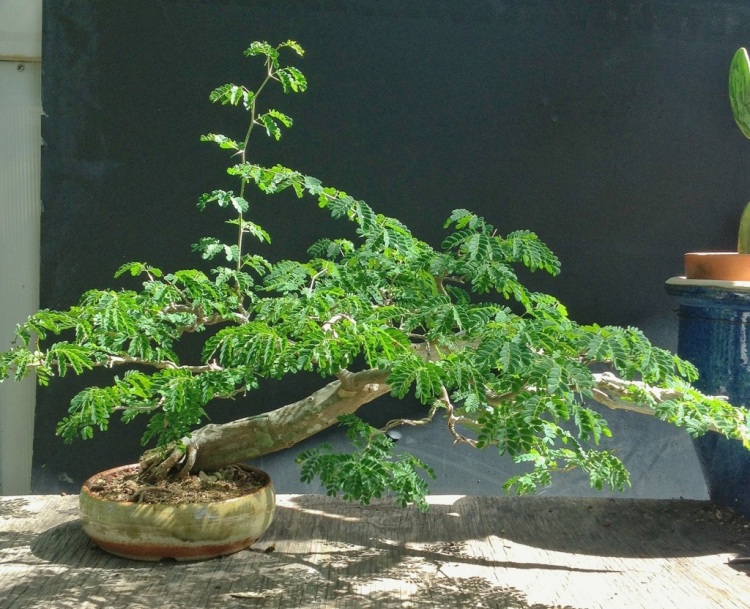 It was a branch cutting that I bought from Mike Cartrett. (I blogged about it here)
As well as this one:

And the last was from Erik Wigert

As I’ll always let you know, it is the beginning of June in Florida. What I do here you may not be able to do where you are.
All of these trees have had their first flush of growth and it has hardened off. If we look at the base of the leaf’s petiole we can see the new bud. This is a good time to defoliate, rewire and repot. We (the generalized we, not the royal we) in Florida do the major work on the Brazilian starting late spring through mid summer. When they are growing, basically. If the tree is not growing well or is unhealthy, don’t do this. 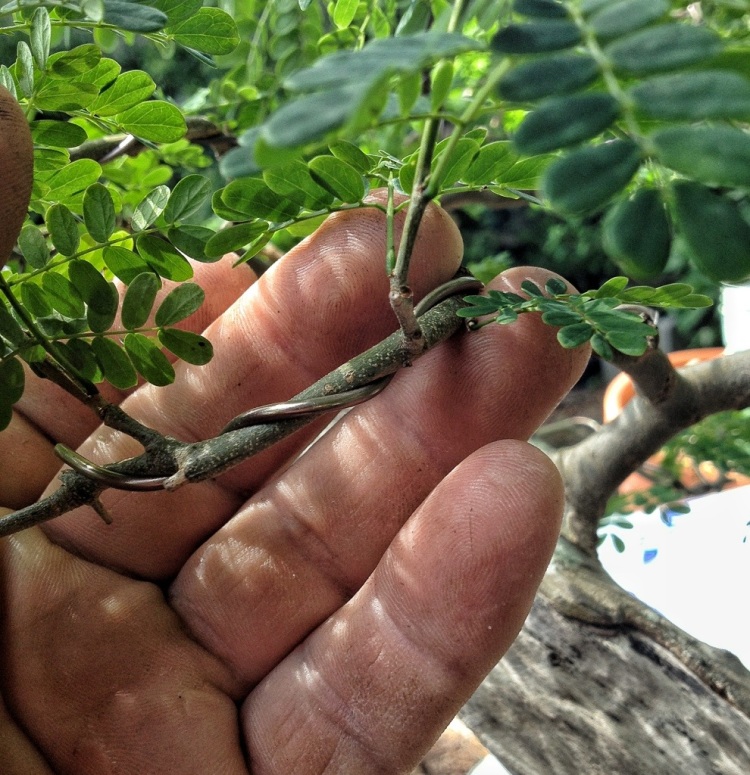 As you see here

The branches are beginning to grow again and the wire is starting to cut in.
The first thing I will do, though, is cut off the thorns (I know Javier and Juan. I’m a wimp)

I’ll just have a fight with him.
I suggest you de-thorn your BRT’s too.
I’ll also be defoliating these trees to stimulate more growth and more back budding.
The leaf on the BRT is a compound leaf (it is in the legume family), which means that the whole leaf looks like a branch itself

The little leaf looking thingies are, not surprisingly, called leaflets.
Here is the tree number one (red arrows showing new growth from this year)

I have to address the wiring, the deadwood 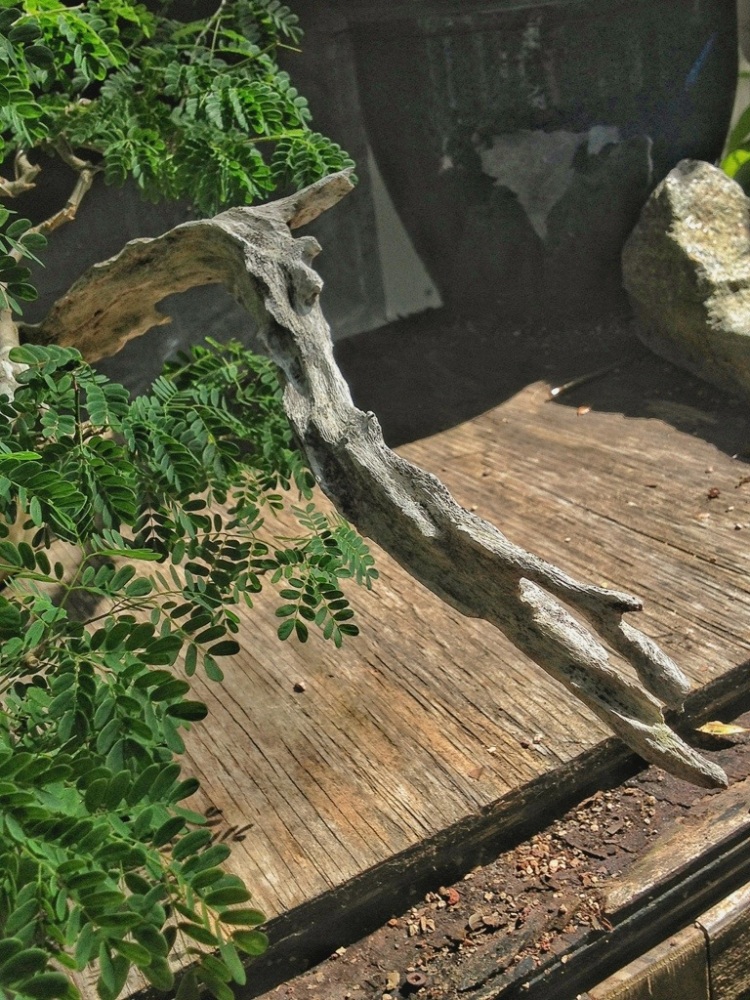 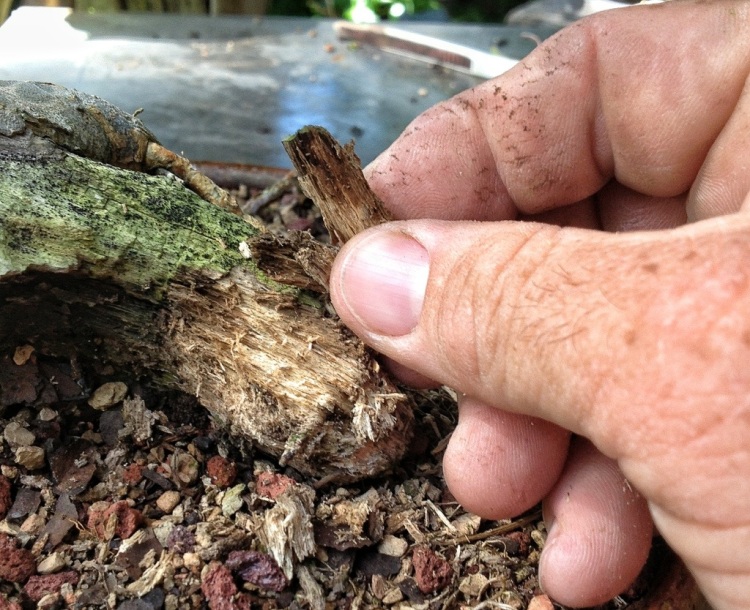 That’s the base and that’s where it rots the most.
Break out the wire brush mi amigos!

It’s the best tool for this job.
After the scrub and the defoliating

I’ll be using the same pot 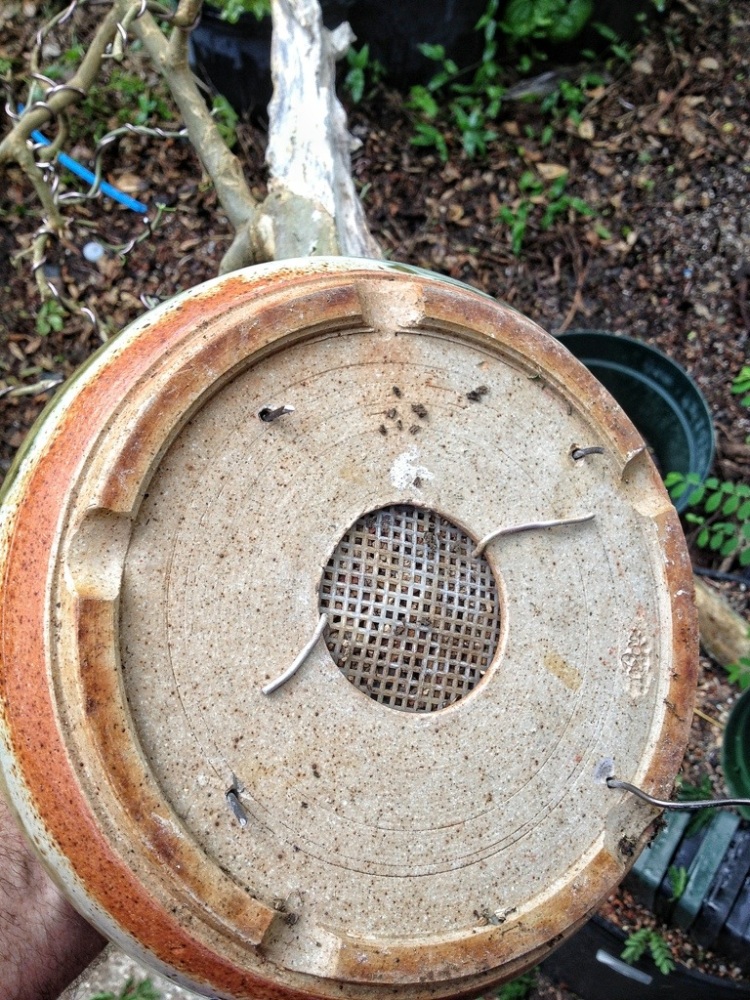 A sweet round pot from Bellota.
I would say its time to repot

And on to the next tree……sorry, you’ll have to read to the bottom to see the finished trees

This tree only needs to be rewired. I repotted it into a big container last year and the roots aren’t bad yet.
The main focus of this tree is this carved top

I let it grow out and it’s kinda hidden at the moment.
Needs a haircut

As I was expecting to happen, there was more dieback on the trunk near where I carved 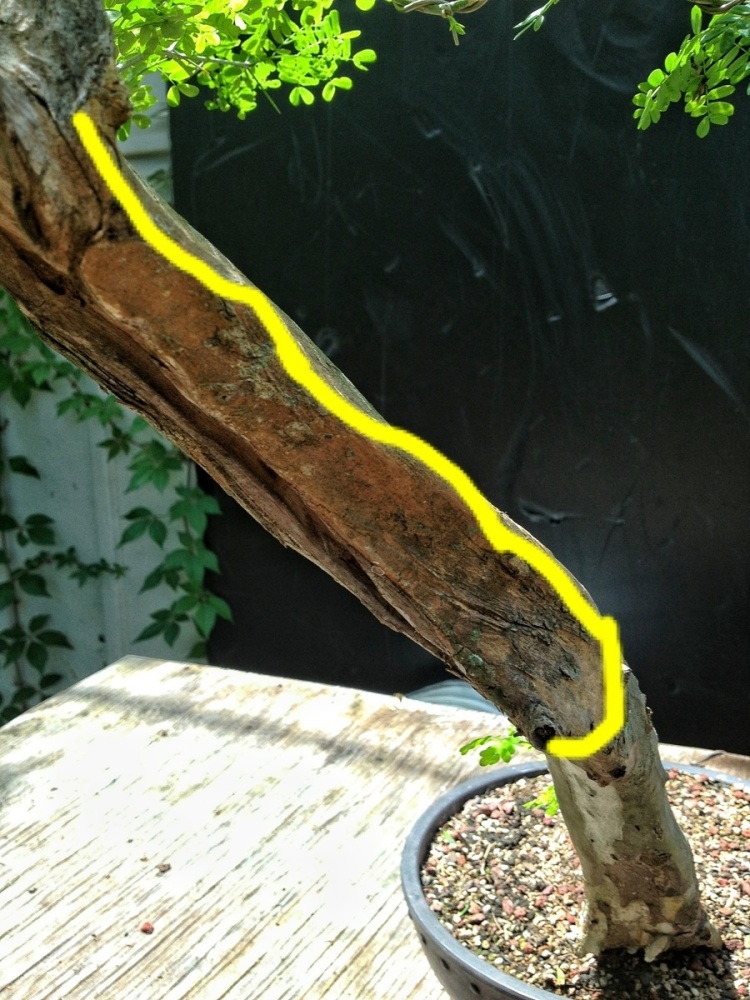 The section to the left of the yellow line was alive. It didn’t need to be but, as often happens, the bark will die back.
The strategy now is to let the tree grow and stabilize; let it find its own line. I’m not worried as I had allowed for it.

Some trimming down low 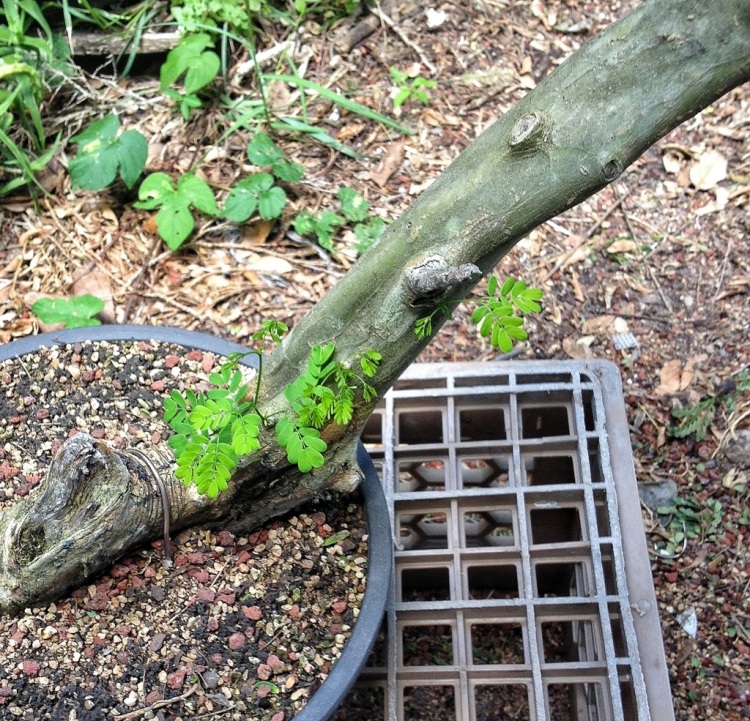 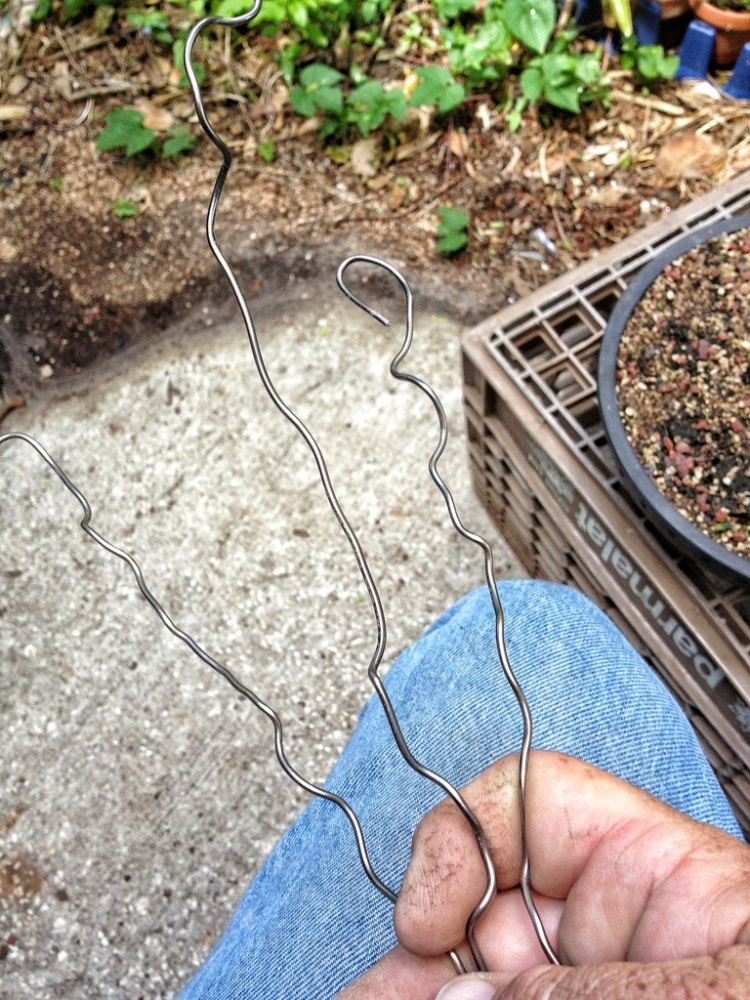 Only three wires!
Most of the straight growth is new 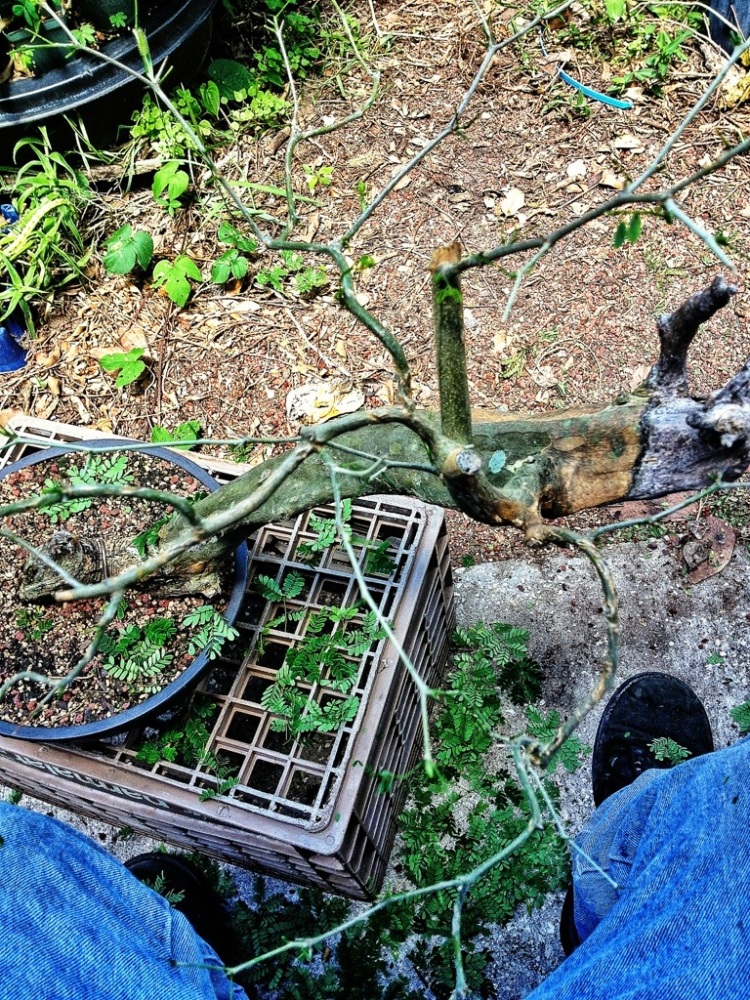 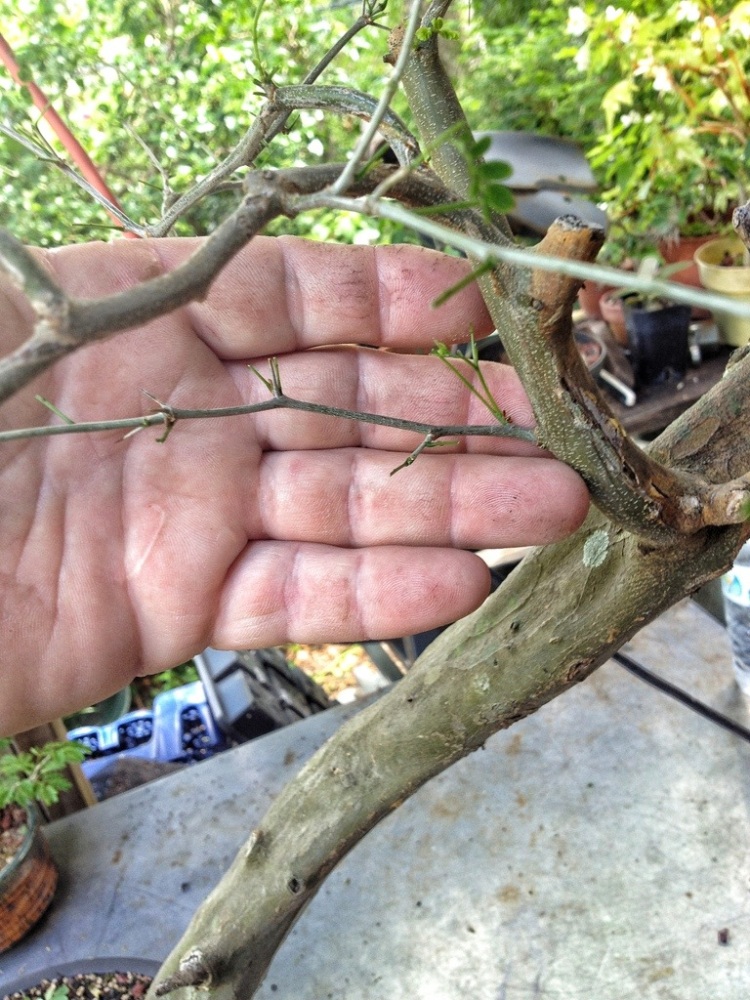 Some wire……and….
Sorry. You’ll have to wait again for the finished tree.
Next tree

This is a nice little tree. The leaves are really small on it too. It’s not something I tried hard at, those small leaves,just the same maintenance I’m doing now.

It has a nice deadwood feature as well

This one needs wiring, repotting and some lime sulfur.
The roots are extremely evident on the soil surface.

If you’d agree, say thankee. As I repot this, if you look closely, you will see little whitish round objects: 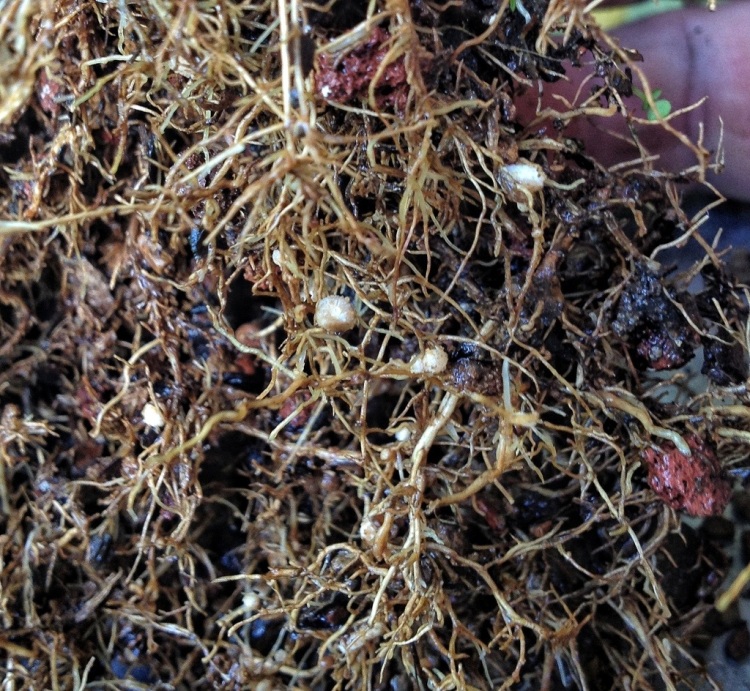 These are called “nitrogen fixing nodules”.
They are good

The intermediate or even some advanced bonsai practitioners may see these and react with horror. They see these nodules and think “oh no! Nematodes!”
They are merely the result of a symbiotic (beneficial) relationship with certain legume species (the BRT being one) and a bacteria.
As the name implies, they fix nitrogen from the air, convert it to ammonia (which is the form in which a plant uses nitrogen) and in return, the plant provides sugars and starches to these bacteria.
The plant needs to be healthy and have well aerated soil (bonsai soil is good).
Not to say that nematode a cannot infect a Brazilian Raintree. They can.
But that is the subject of an upcoming post and deals with seafood. Really.

With the deadwood cleaned, the leaves defoliated

Yes, it is orange but it does bleach the wood white. It even goes on orange.
Wired and sulfured 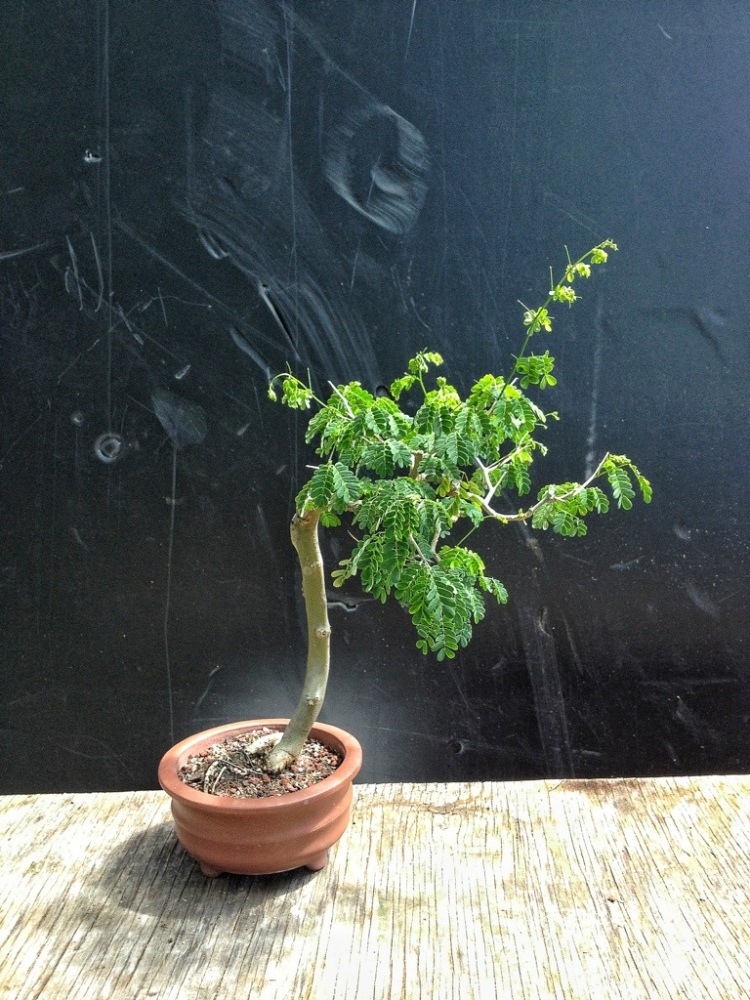 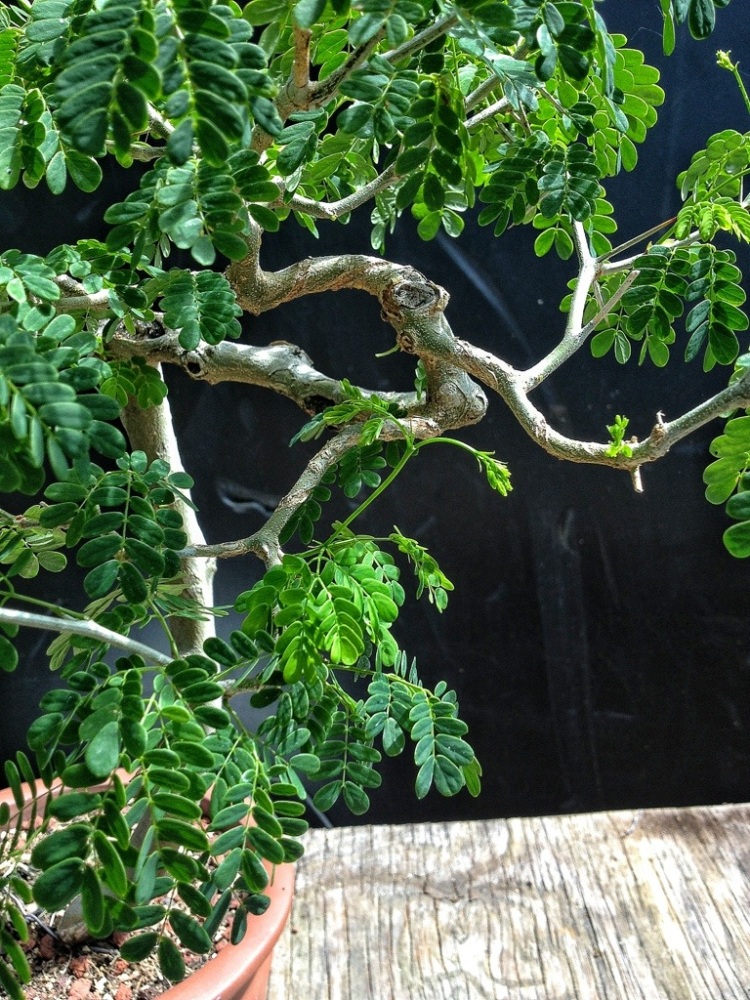 Which you can’t see at all.
I started here

And the arrows indicate where I cut it.
Here are where those cuts occurred on the tree 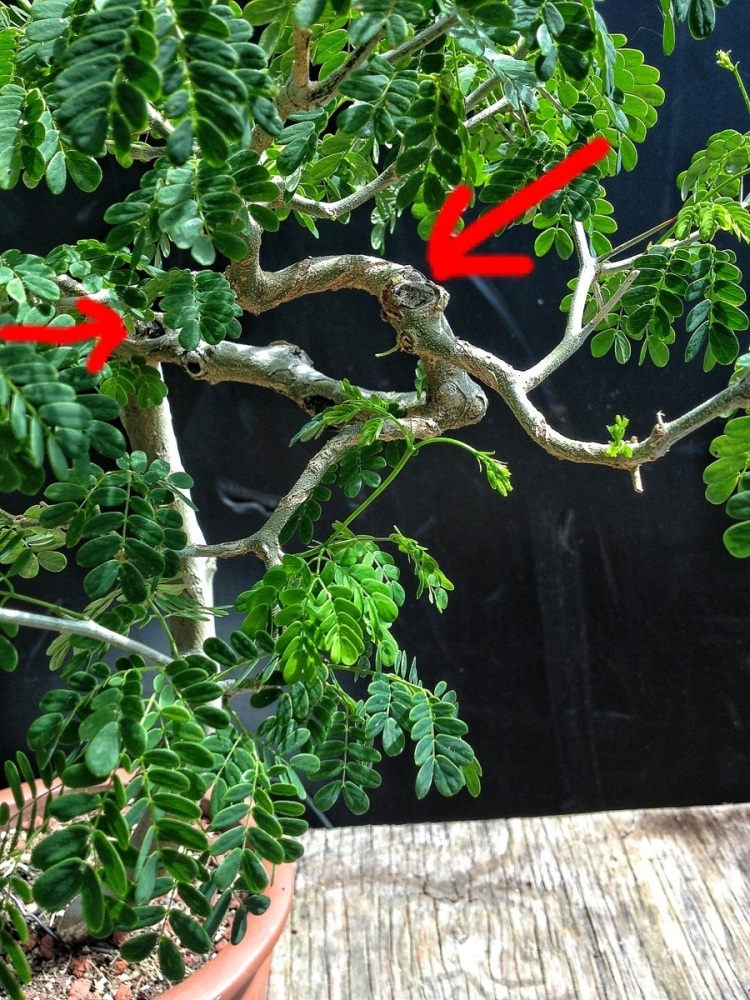 You can see the line of the tree after defoliation 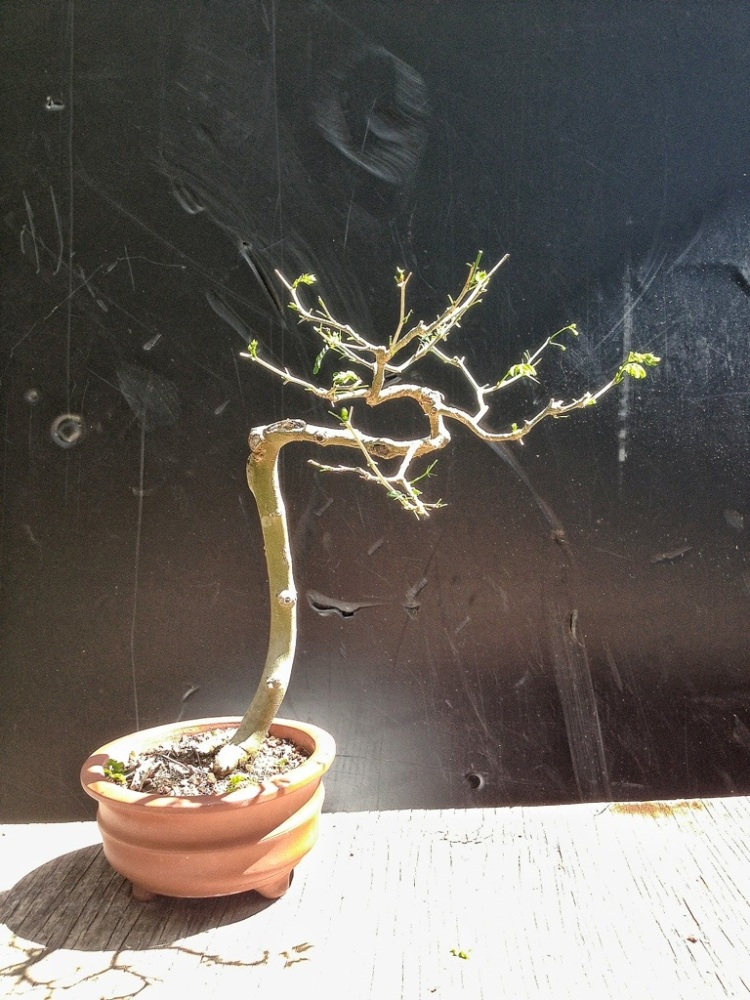 But I think I shall change the angle

Drama drama drama.
A good design rule: try to not make anything on the tree parallel to the ground (the pot lip). In your mind’s eye, a horizontal line that is parallel to the horizon (the back of the pot) acts as a stop or barrier from seeing anything above or below it. You might see the neato keen pot and your eye goes up the trunk and stops at that limb. Or you see that majestic, spreading and verdant canopy only to ignore the rest of the tree.
Do ya’ ken it?
Speaking of neato keen pots, 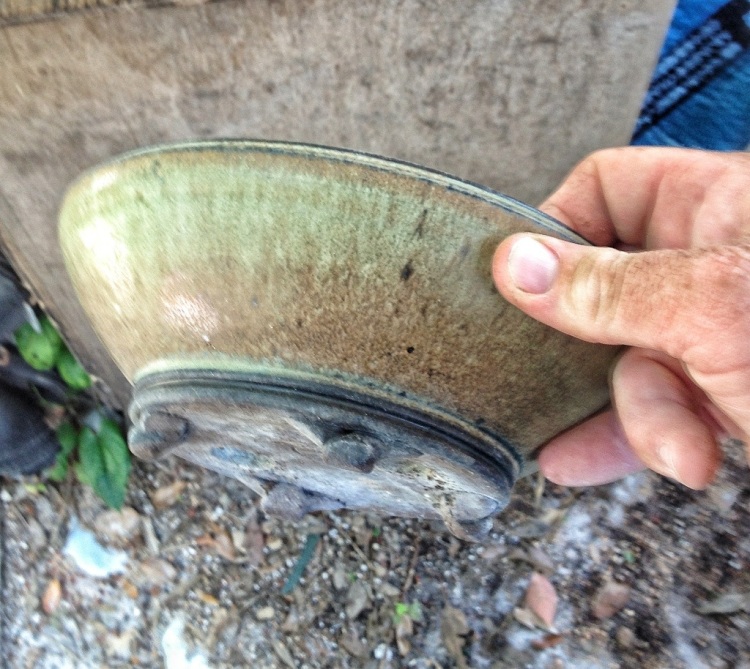 this is the new pot, a Sarah Raynor, I’m putting it in.
Truly in need of a repot.

I add some wire, and some dramatic lighting, an artsy angle 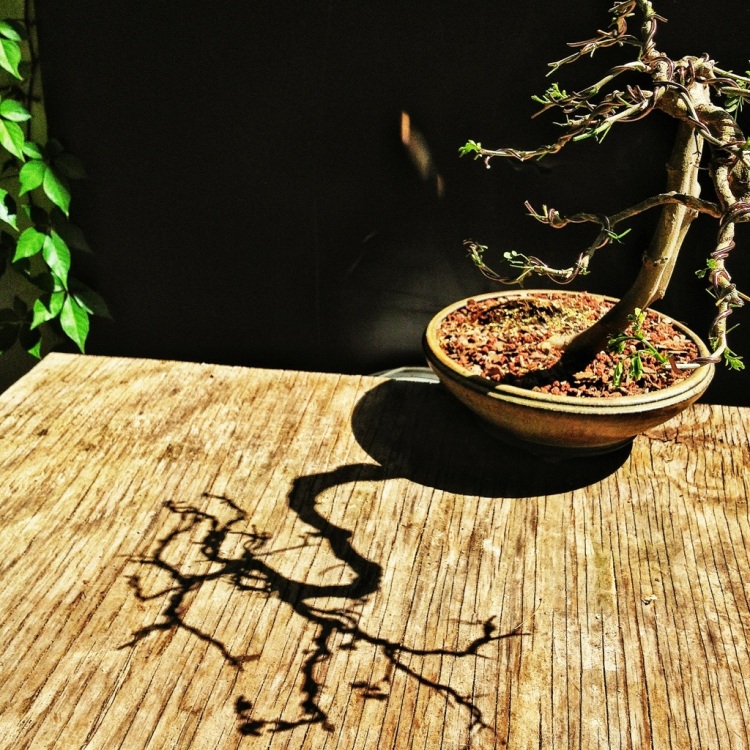 I’d like to be maudlin a bit. The history of this tree makes me a bit sad.
When we first started our study group, NoNaMe, we had a lot of members who I thought would be with me for a long while on my bonsai journey.
Ed and Ryan don’t come because of church activities conflict.
Paul, Sandy, Rick and Mike are still good friends but life has been happening and they haven’t been able to attend because of it. I still have hopes to see them soon.
Then there are the ones who don’t come because I’m a jerk, I guess.
I apologize because I am.
We had a workshop with Erik using these trees (it was to be a group thing that we were to progress together as a true study group. We did the same thing with some dwarf crepe myrtles. I still have both in hopes that we can regroup.) and every time I look at this tree I have a small, sad moment.
Here are some dirty words;
Politics
Pride
Jealousy
Personality worship
I try not to practice any of these things anymore, I’ve renounced them.
Clean slate.
It’s just about the trees now.
I am also glad of all the new members of the study group. I couldn’t ask for a better bunch of people.
We laugh, bullshit, and keep ourselves humble.
And we work on trees.
Sorry for that bit of soul sharing, back to the trees.
Do you want to see them? In all their technicolor glory?
Well, here you go then:
In reverse order

Look for the post soon on the “root knot nematode” and how it affects the BRT.