This past week we had Nacho Marin, a very talented bonsai artist from Venezuela, in to do a demo for the Central Florida Bonsai Club.
I had the honor of telling him that his submission to the World Bonsai Federation’s photo contest 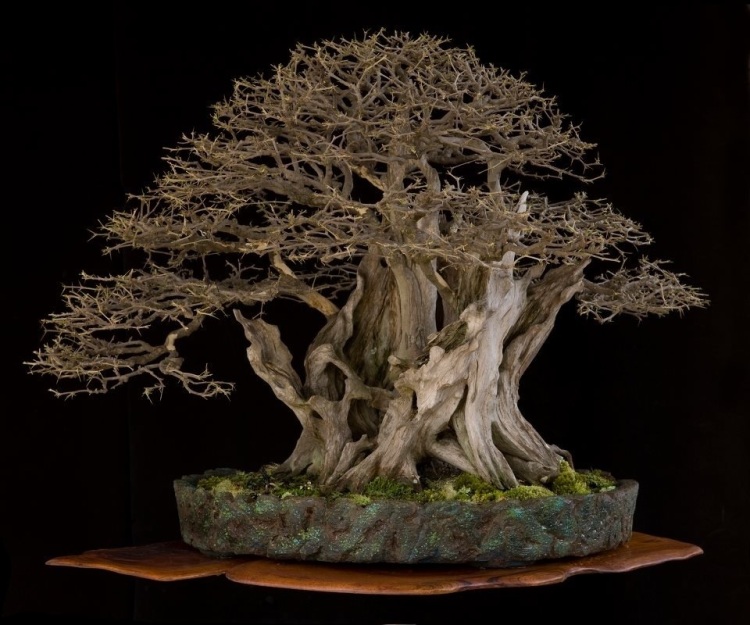 was chosen as one of the best 36 bonsai in the world. 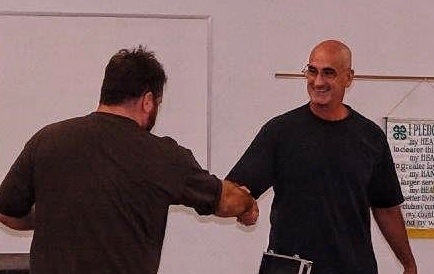 We presented Nacho with three trees and asked him to pick one.
He hemmed and hawed and asked if he could do all three.
You can’t say no to Nacho.
There were two buttonwoods (mangle buton as they say en español) and a Campeche (Haematoxylum campechianum as they say in Rome)
This will be the Campeche’s story
The two buttonwoods are here 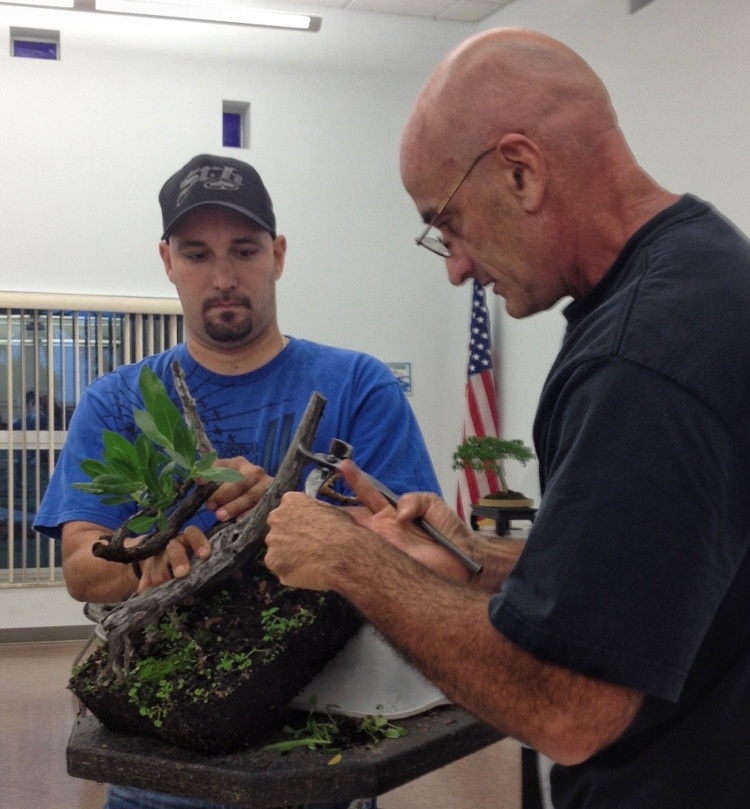 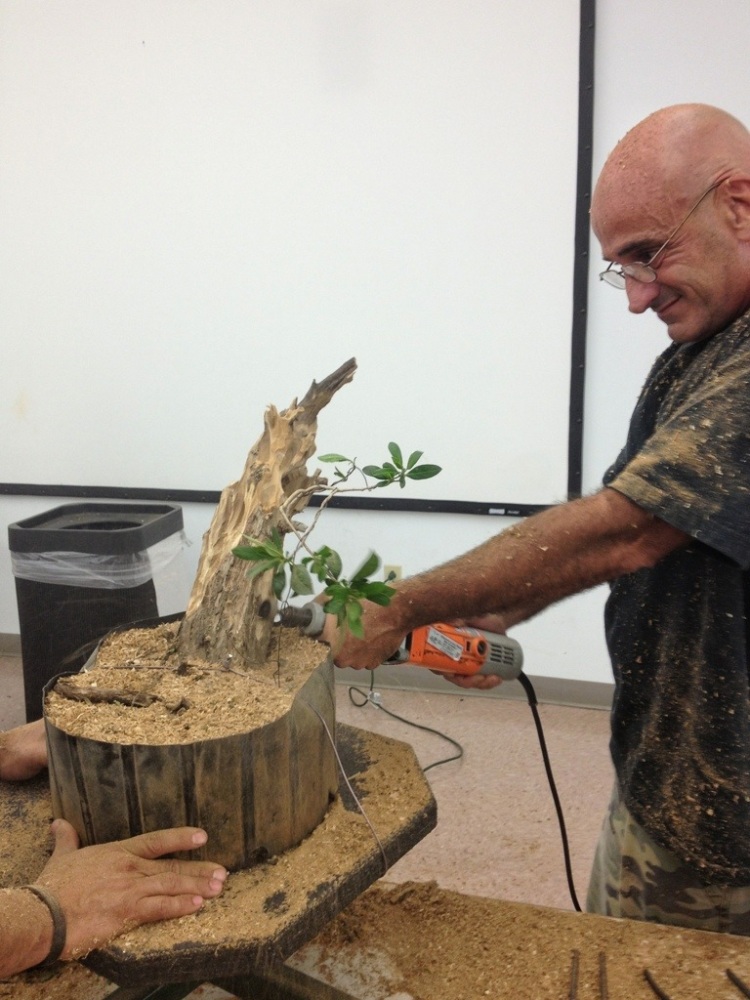 He thought each one had a bit of difficulty that would help in his teaching.
He began by talking about how tropical trees are built (or grown) and a curious thing he said (which confused everyone) was that you had only two kinds of trees:conifers and deciduous. Even though a tropical tree doesn’t act like a deciduous tree at all.
Bonsai people are weird when they talk about things, aren’t they?
If you enter a contest and use a ficus or even a bougie your tree will be lumped into the elm and maple category. It’s like the bonsai world is in denial that a third category should exist.
Anyway, here’s the tree 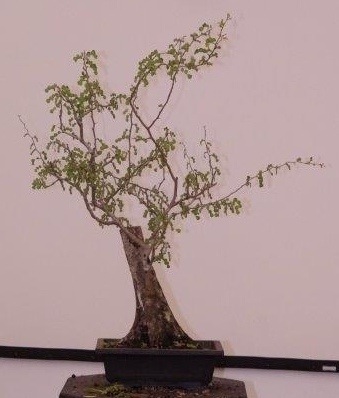 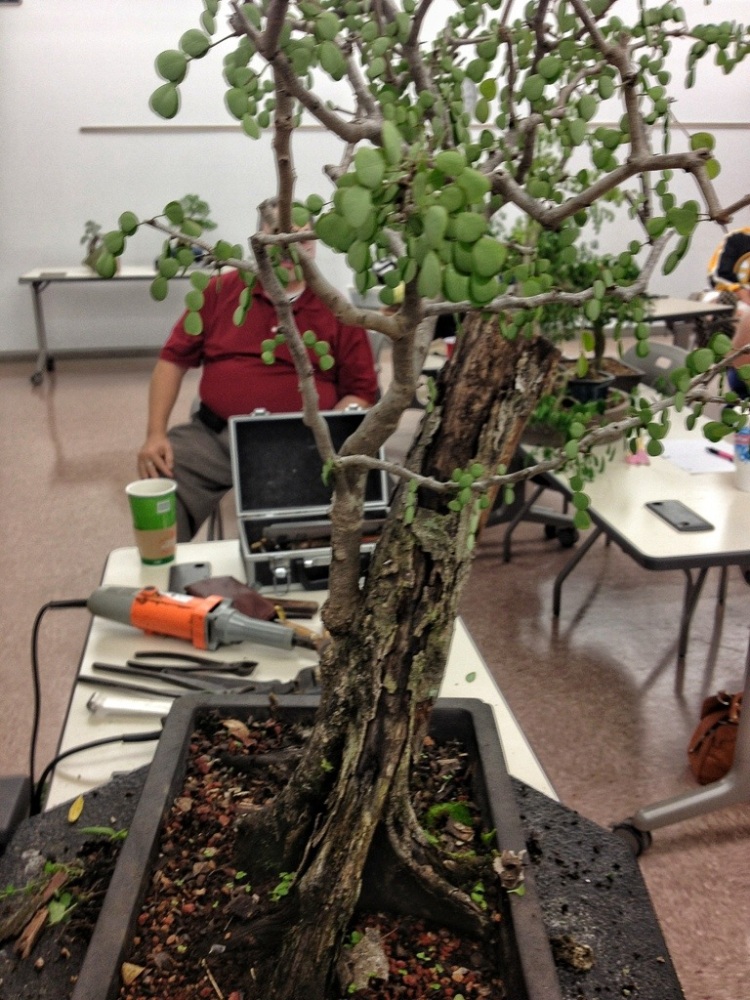 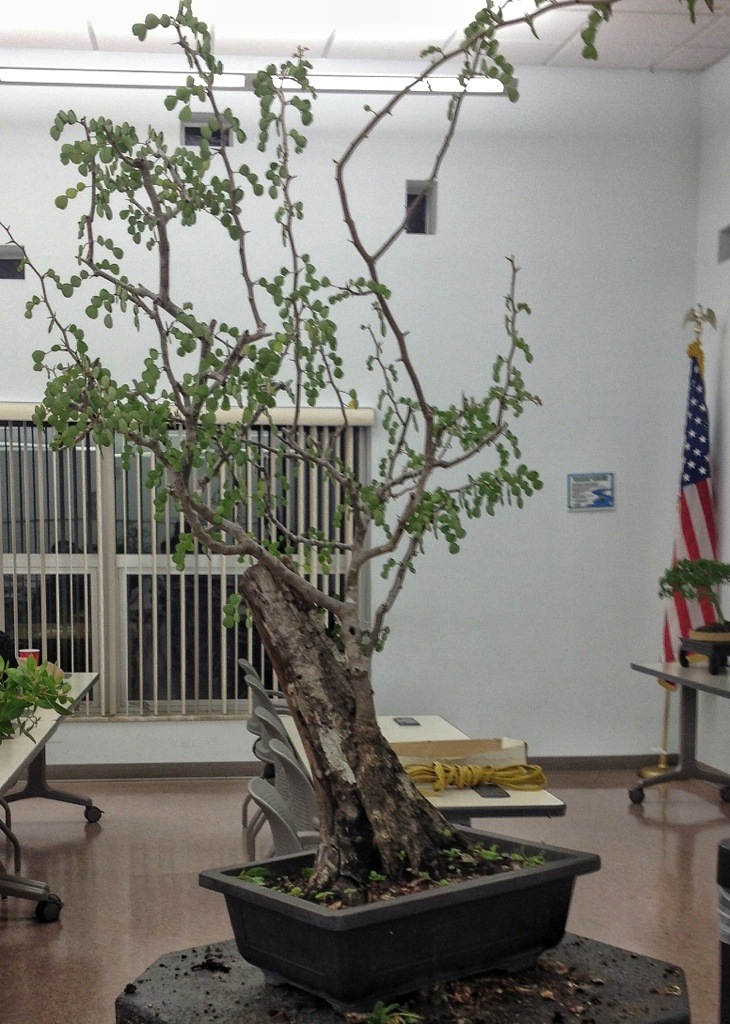 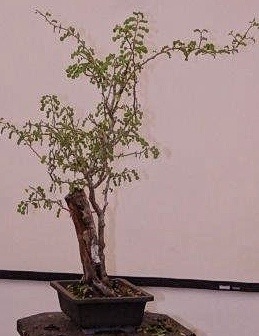 The challenge he found in this tree was the main trunk was dead.
The dead trunk, bracketed in red 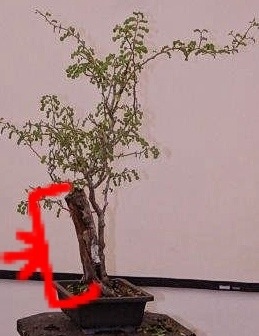 There were some people who thought that the club should’ve purchased some super-duper, wickedly awesome piece of material for him to work on.
The truth of it was he was pleased with the material.
He said that he could insist on such great trees (like so many bonsai artists do) but he preferred to work on these “difficult” trees. They are great for teaching.
Those artists that work on super-duper trees do a real disservice to the novices and students by making bonsai look like its a quick art. That all a tree needs is for some “rock star” to come in, shears blazing, and create a masterpiece.
Nacho commenced to make a mess; breaking out the carving tools 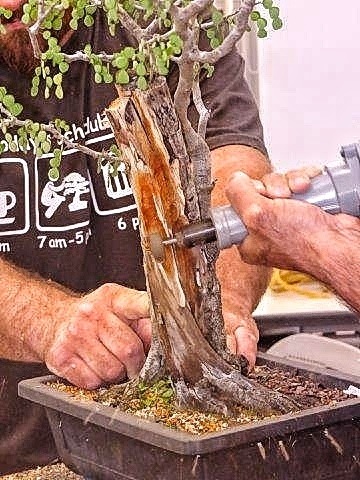 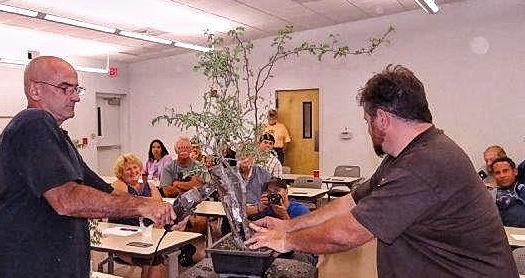 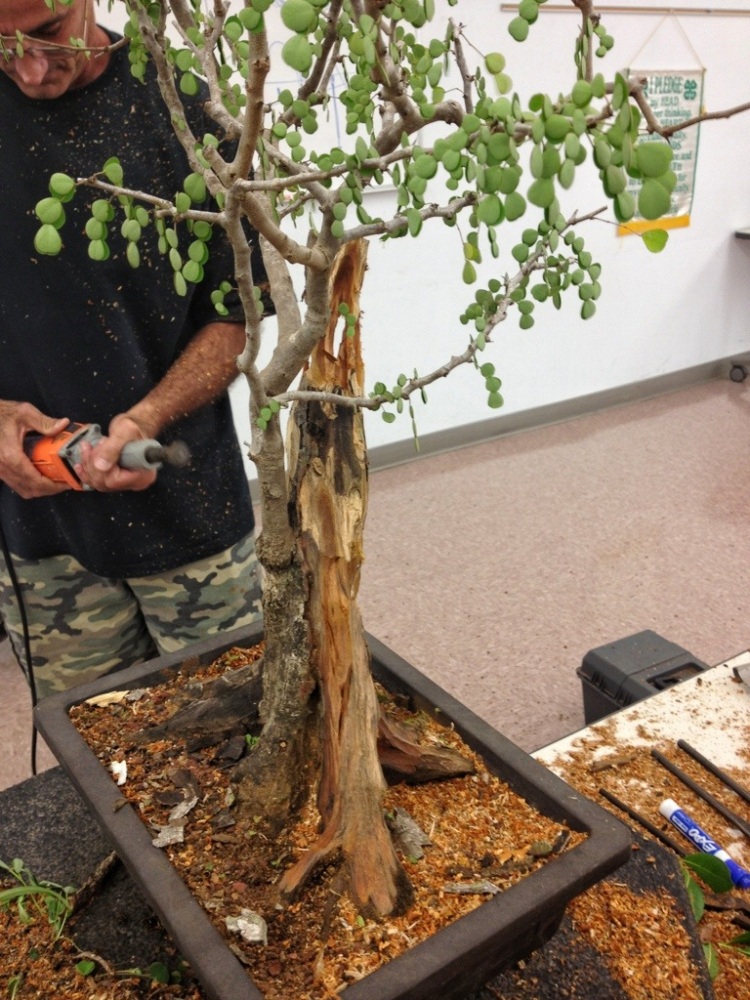 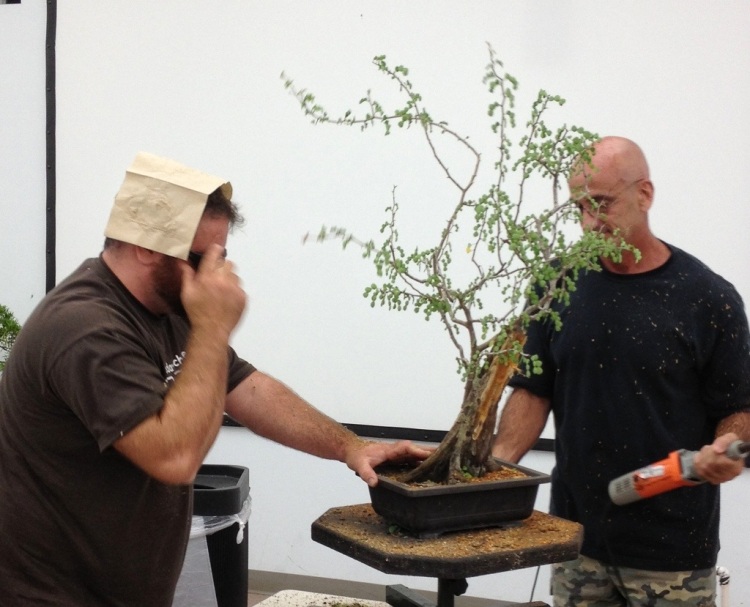 I was quite ashamed.
As you see.
I will say, Nacho had a knack for aiming the wood chips at my face. 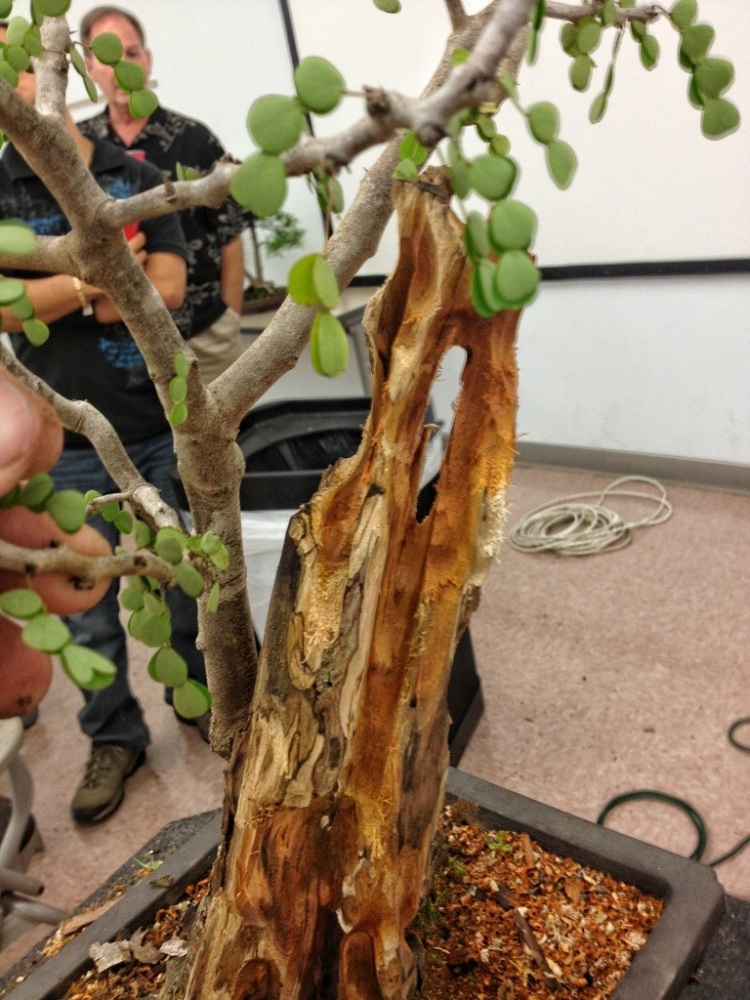 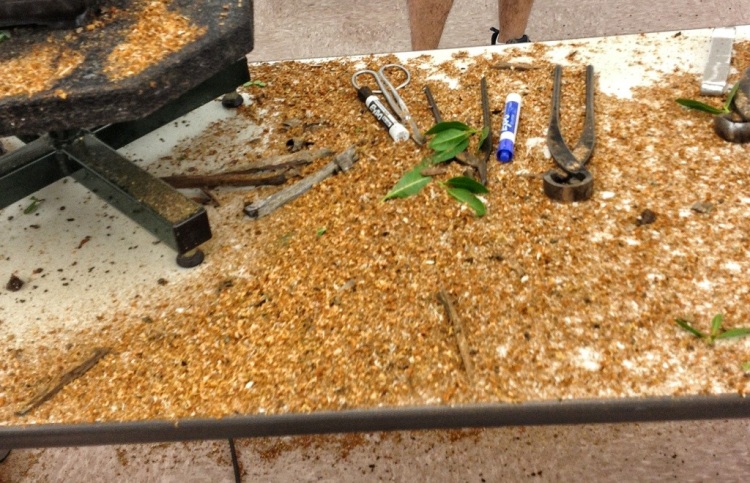 And the carving is done 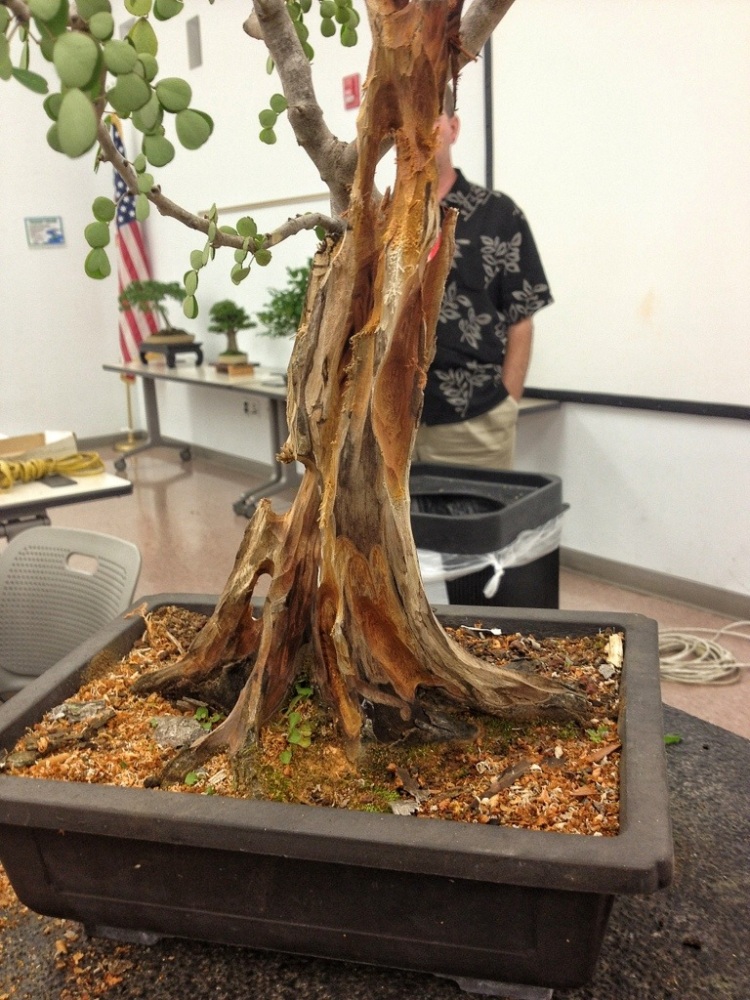 And, as usual, the best carving is in the back.
Now he tells us to wire it.
Every branch. 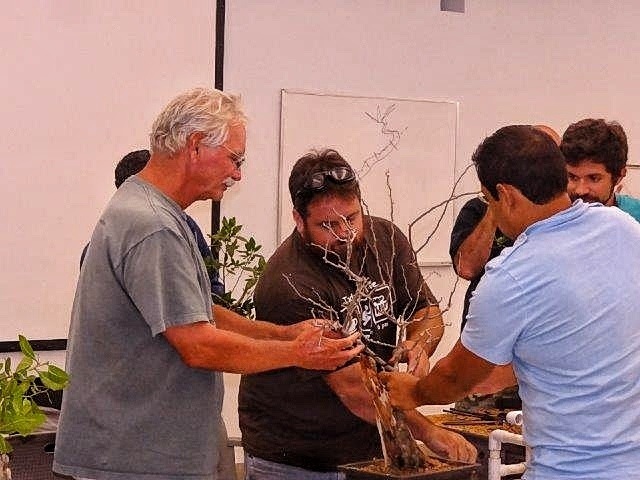 To the tips.
He changes the angle slightly 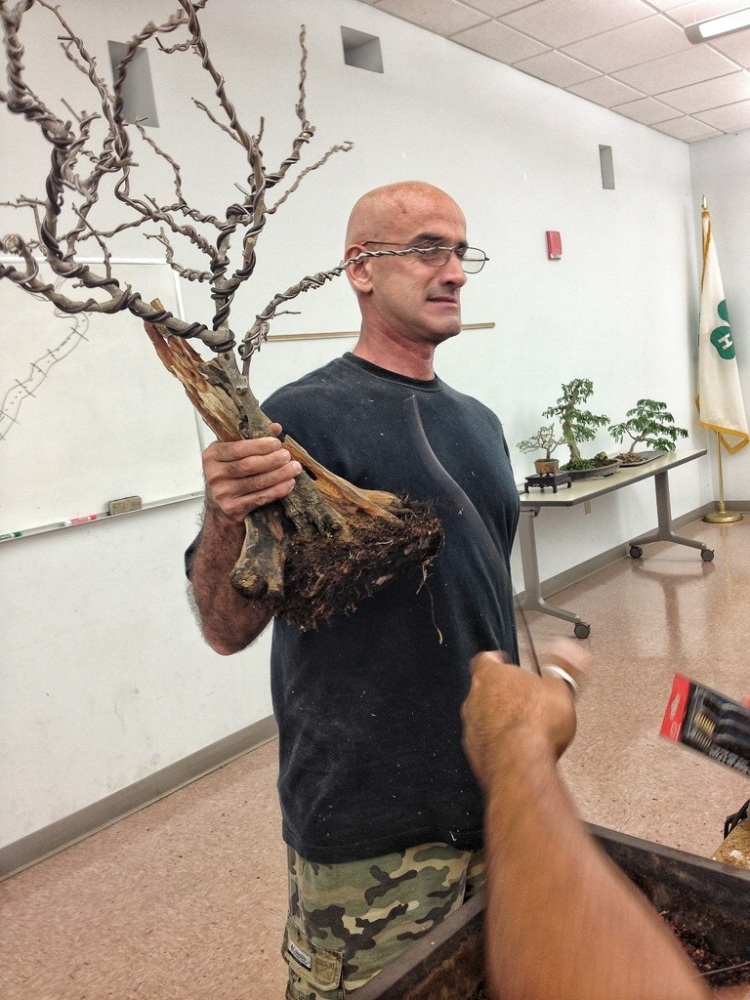 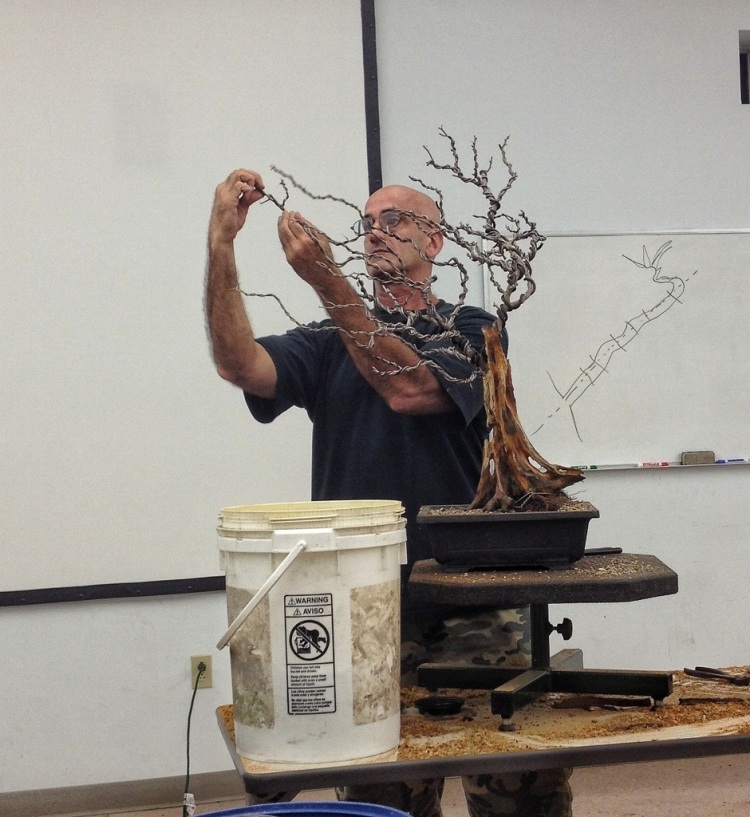 And here it is after he is done 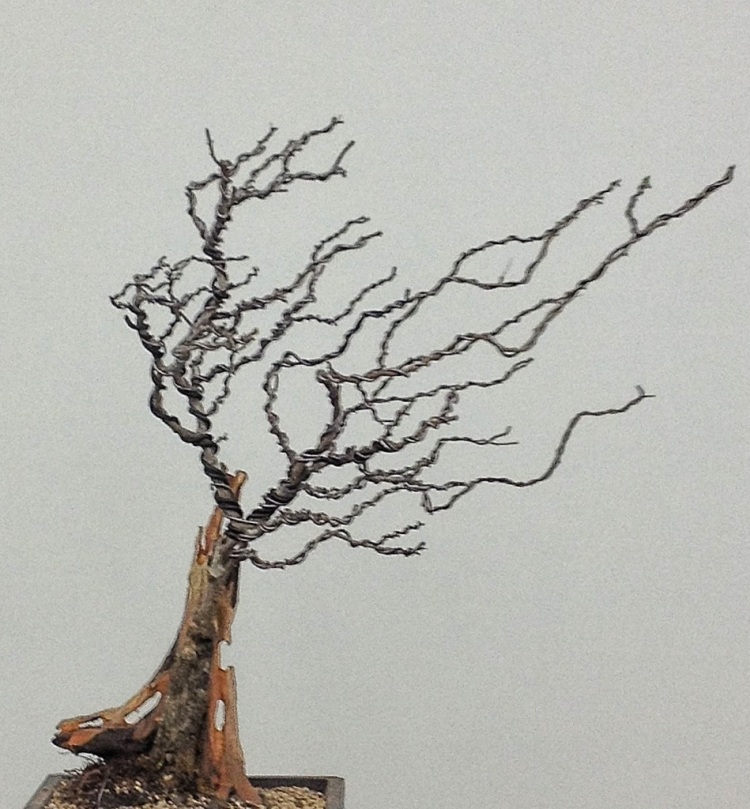 It will be auctioned off at our summer picnic (go to www.centralfloridabonsaiclub.com for the date, time and location) along with the other two trees. 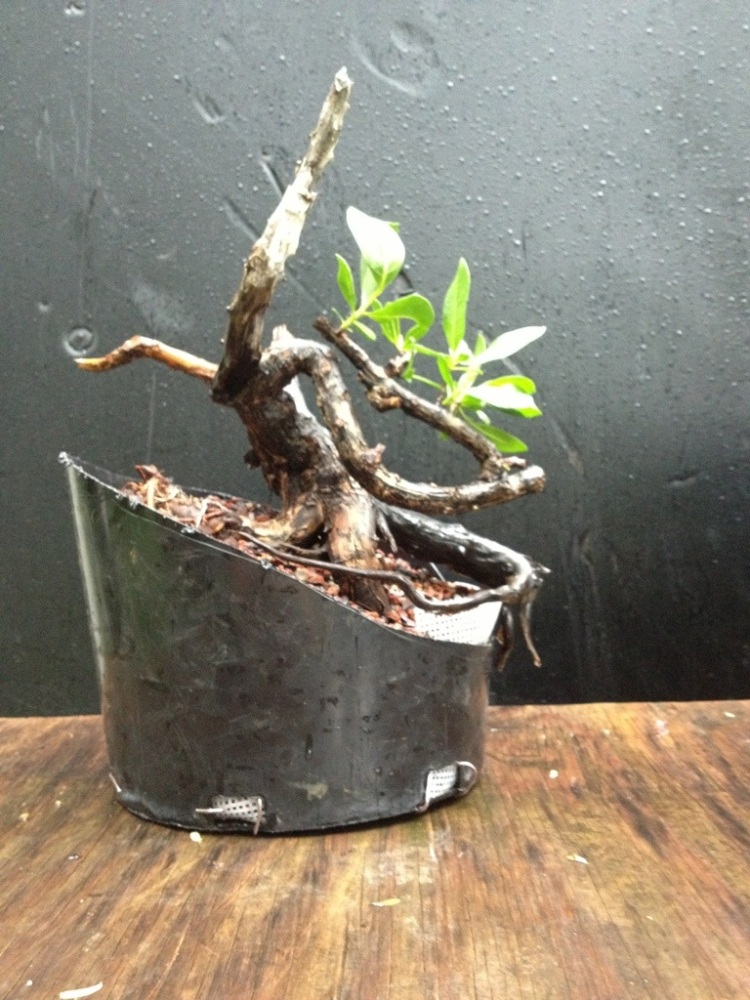 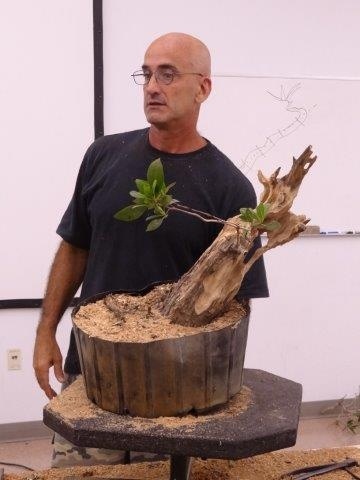 I repotted the Campeche into a nice ceramic pot 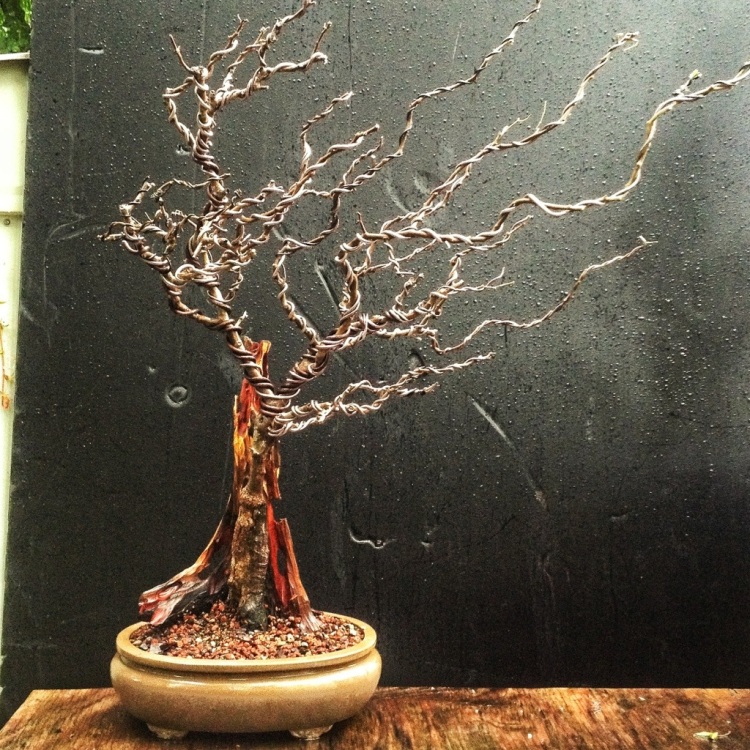 Here are some nice detail shots for you to drool over. 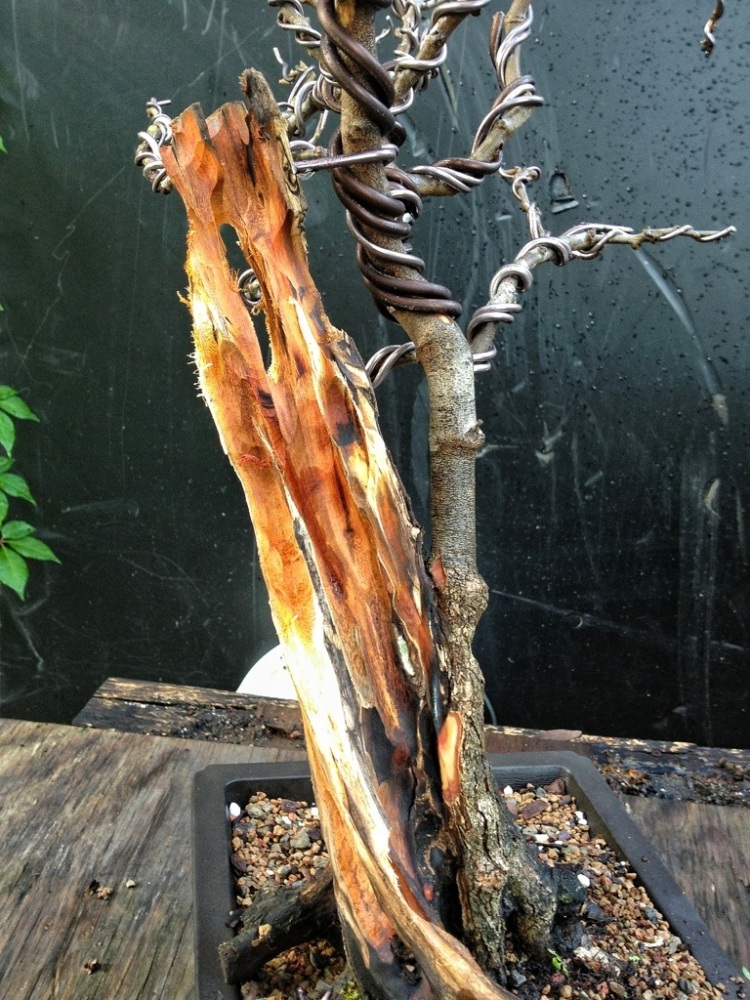 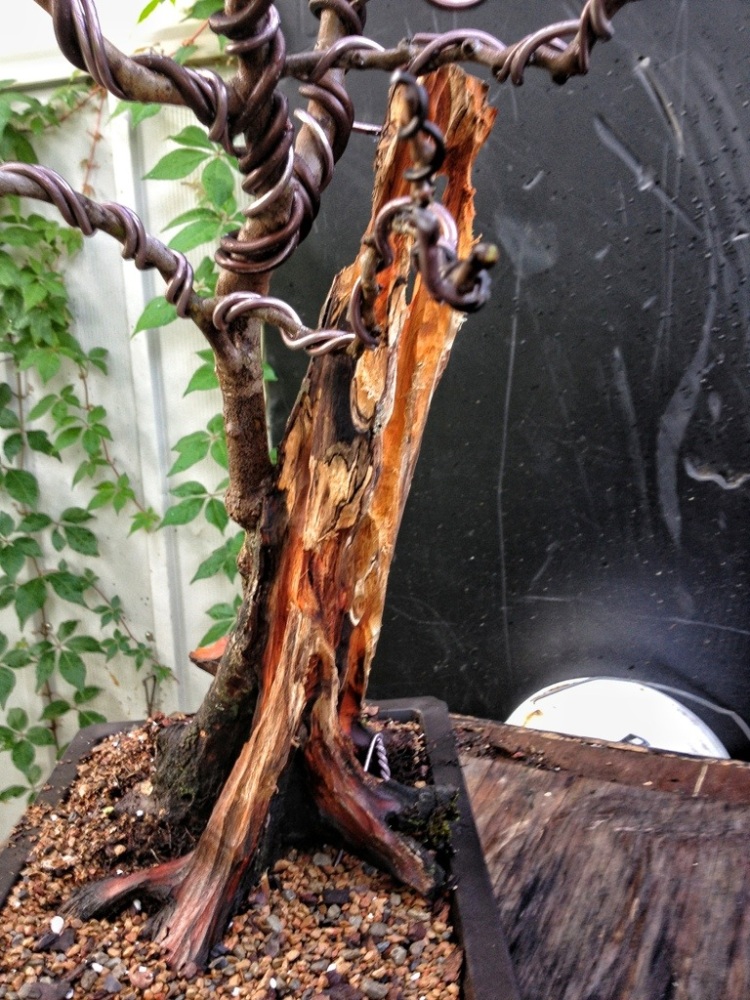 To see more of Nacho’s masterpiece trees go to Nacho’s gallery on his website (www.nachomarin.com). It is a flash website so it takes a while to load. Or he is also on Facebook. (As I am, if you want to connect) 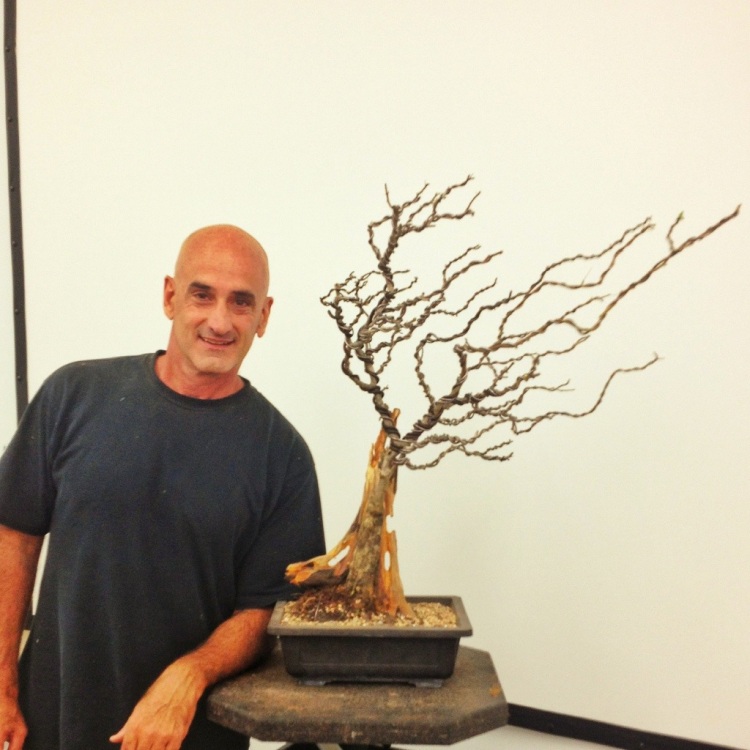 If you get the chance, I recommend going to see him. Great guy, funny, and a great artist.
Photo credits go to me, Juan Dominguez and Nacho.