Lime prickly ash.
Funny name for a tree right?
It sounds like you have a, uh..inflamed dermis on the posterior.
The Latin name is weird too, and unpronounceable “zanthoxylum fagara” 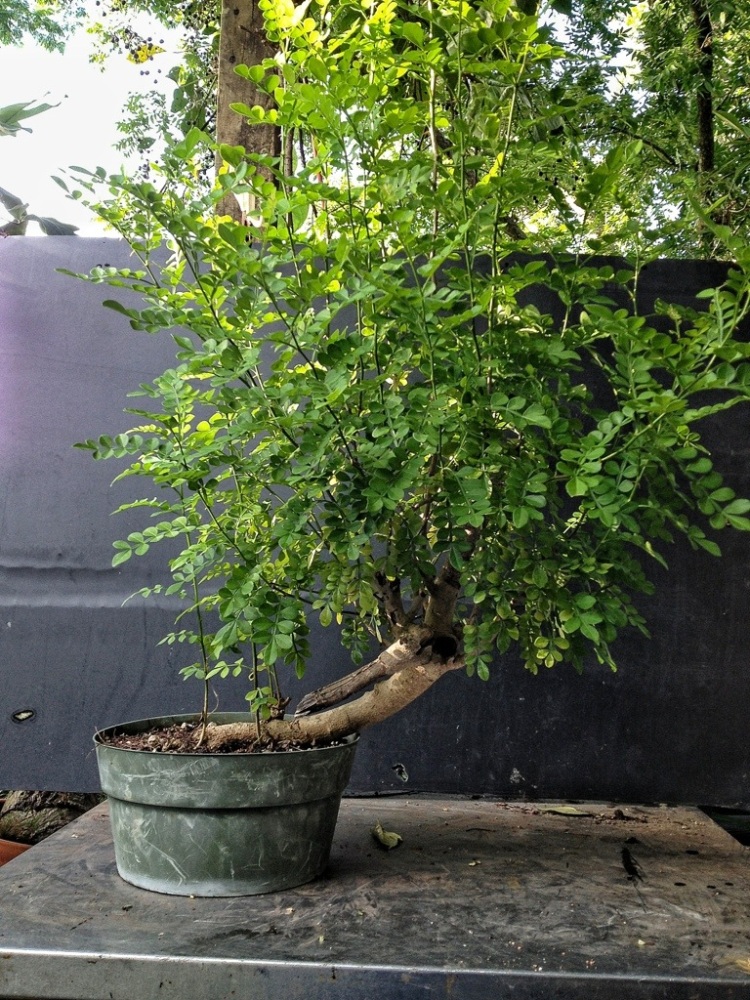 It is in the citrus family somehow and it is also related to the Chinese pepper tree (zanthoxylum piperitum), a regular bonsai favorite (and culinary herb, Szechuan seasoning comes from it).
The leaf on the lime prickly ash and the Chinese pepper are similar:
Lpa-

Definitely a family resemblance.
In doing my research I discovered that zanthoxylum species are distributed very widely throughout the world.
I mean, it seems that every country and region has its own special prickly ashes.
It would even be appropriate to say that prickly ashes are ubiquitous and endemic.
Some countries have spineless prickly ashes and some have really mean prickly ashes, with inch long thorns. Some places have big ashes, some, the ashes are small.
Some have no ash at all.
I think I’ve gone as far with that joke as I can go, so….. back to the tree.
This tree was collected by Erik Wigert several years ago. 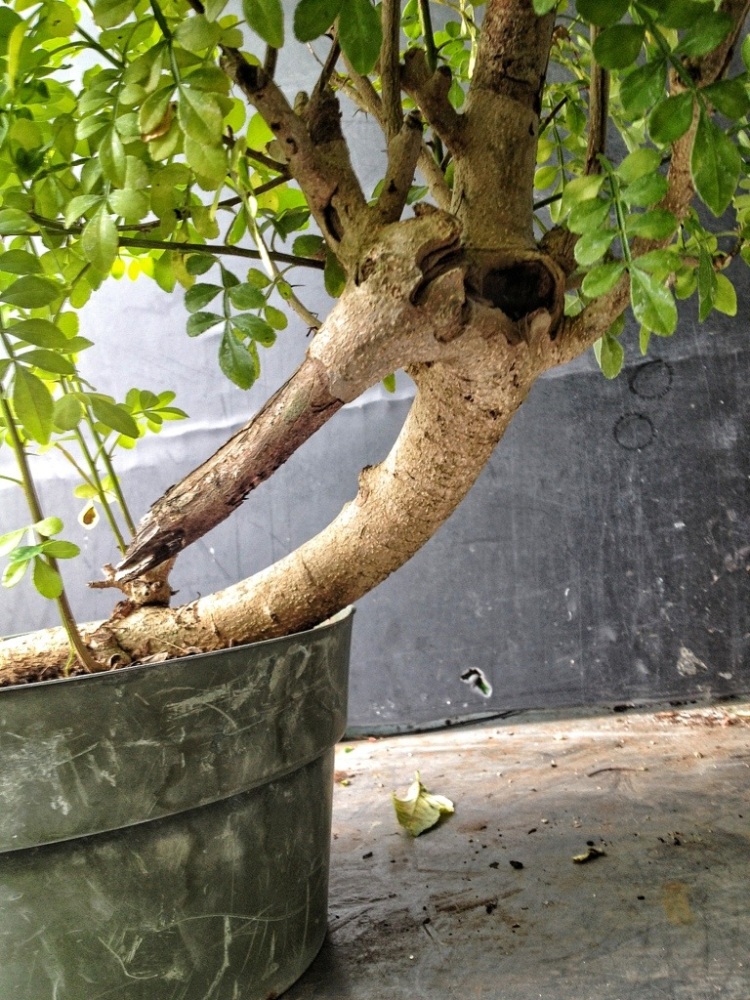 The trunk is very unique. It looks like it was a green stick break that healed itself. 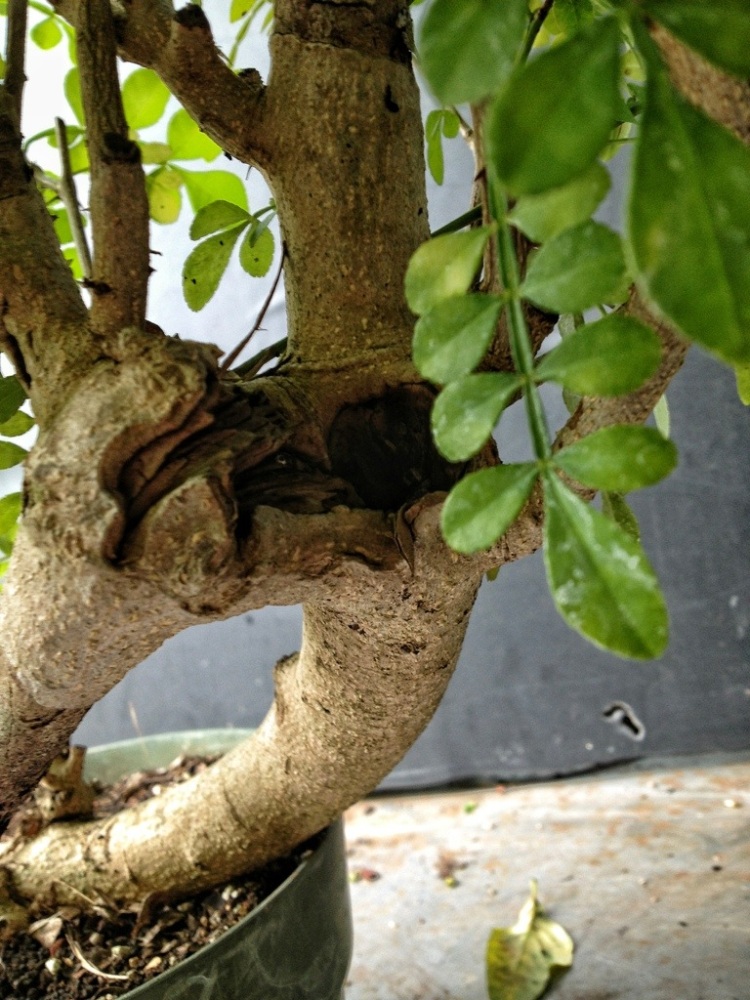 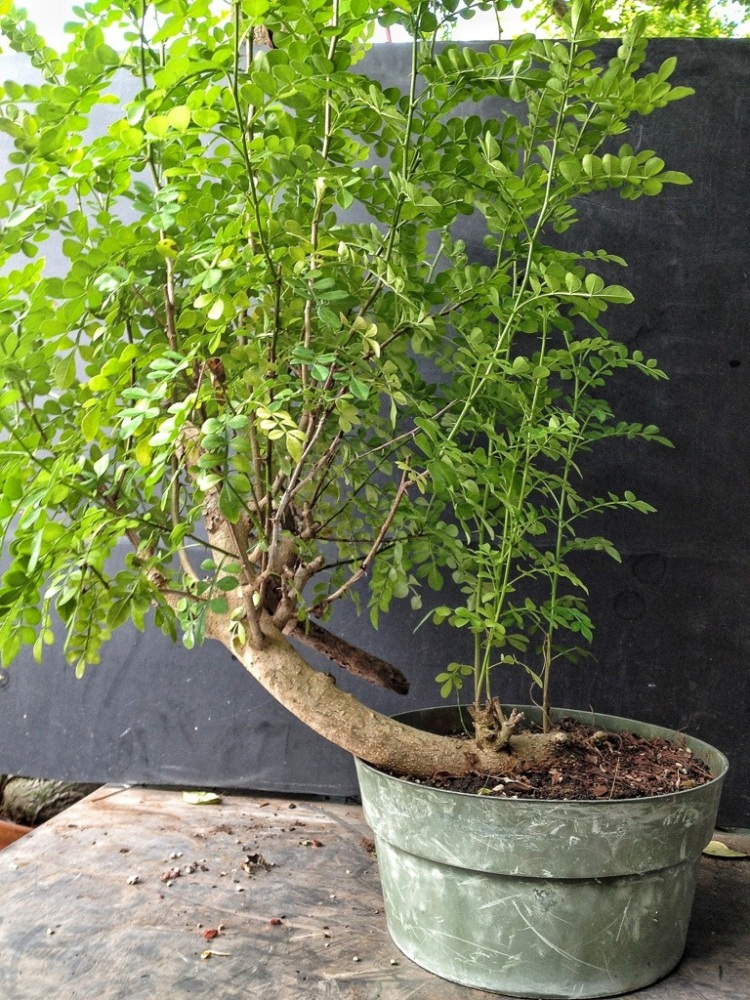 It’s a heavy feeder and grows pretty fast.
This tree is definitely a challenge.
I love it! 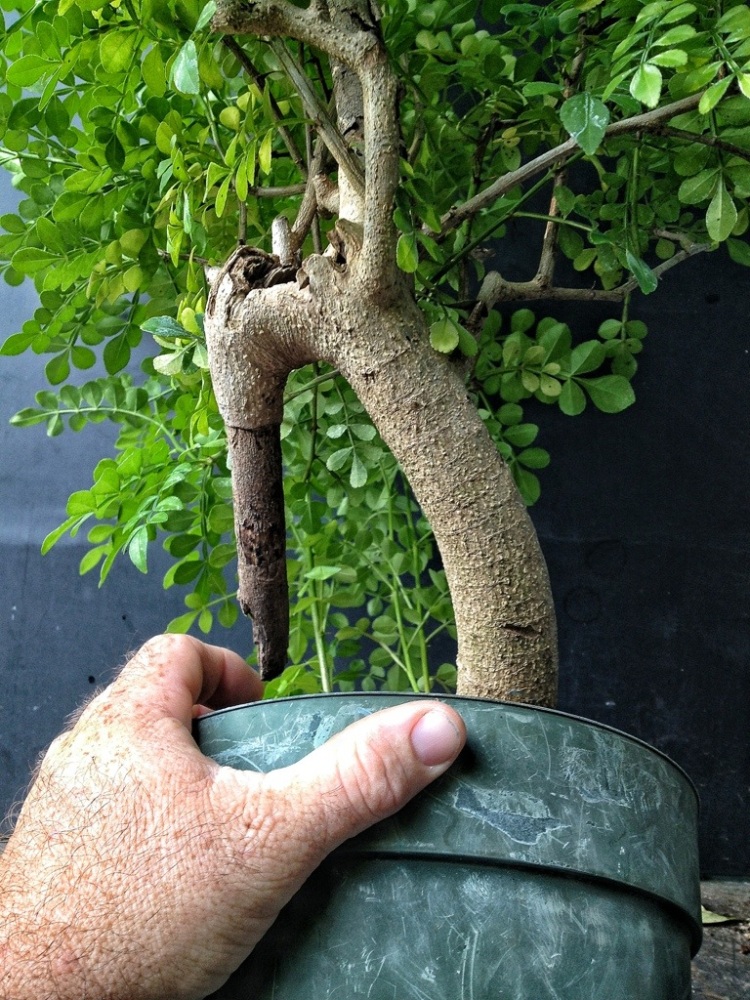 I think the best angle is this one 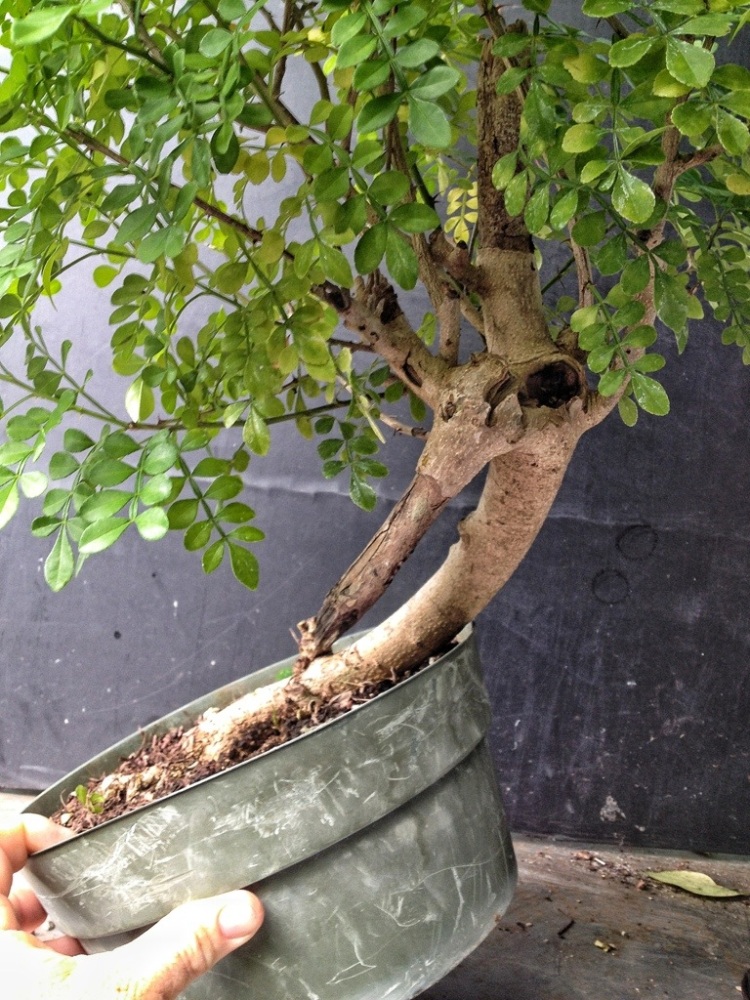 If you look closely you’ll notice they point inwards. Which doesn’t make too much sense unless they developed to trap animals within the canopy and the decaying carcasses are meant to feed the tree.
I’m serious, you can squeeze your way into the branch structure with nary a scratch but try to pull yourself out and your stuck.
I have had a hard time keeping this green, maybe if i try some bone meal, or…..there is that neighbor’s yappy dog…..
Sorry.
Anyway, getting back to the tree, the wood on it is persistent and will last.
There will be a carving on this bad boy in the future. 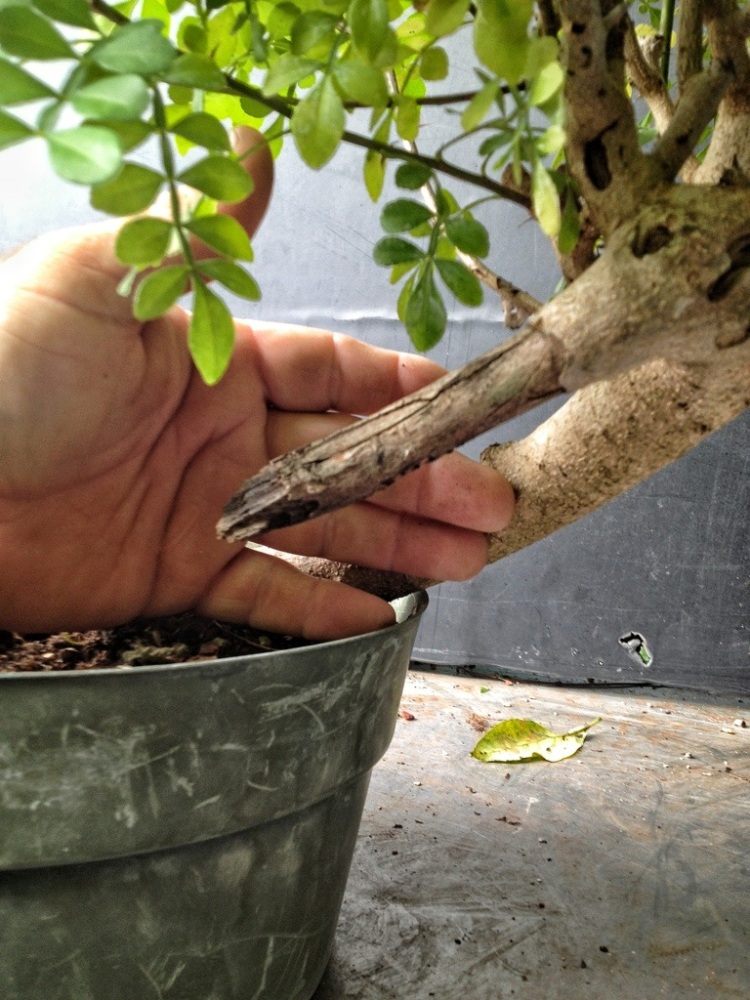 But not now. I will create some smaller jins on it with some pruning though.
The criteria I’m employing when choosing which branches to use for Jin or not is this

First, is it large enough.

Second, does it bend, if it bends it might be a branch.

Lastly, does it need to be there

Of the branches in the three pics above, the first branch doesn’t need to be there.
The second is not big enough but very bendable (branch candidate) and the third is as stiff as a Gump, but it is Jin-able material.
This branch 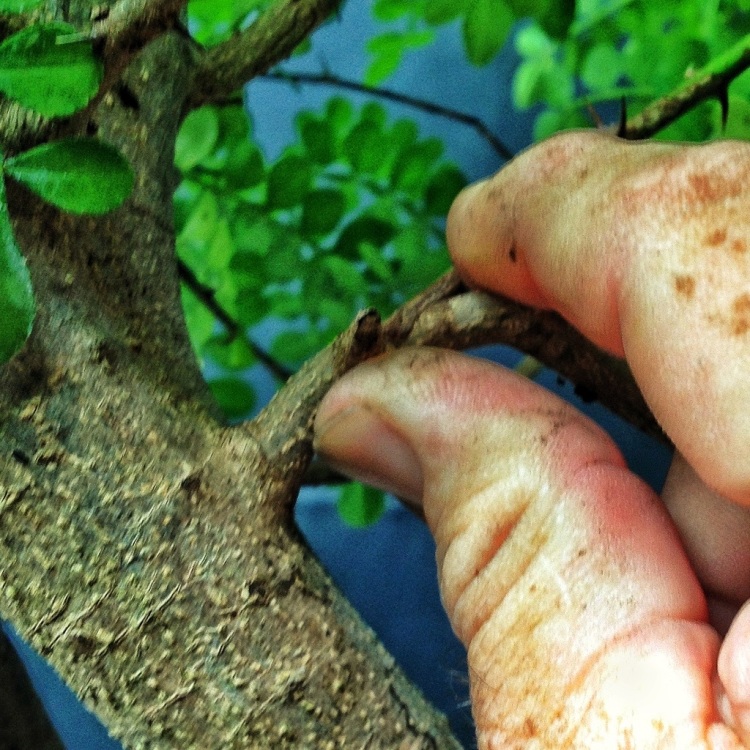 Good.
This whole branch structure will be jinned

Cut the branches down and leave a stub

(Making absolute sure that the photo is terribly out of focus)
Score around the base of the stub you wish to Jin, and crush the bark (not too hard that you crush the wood underneath) 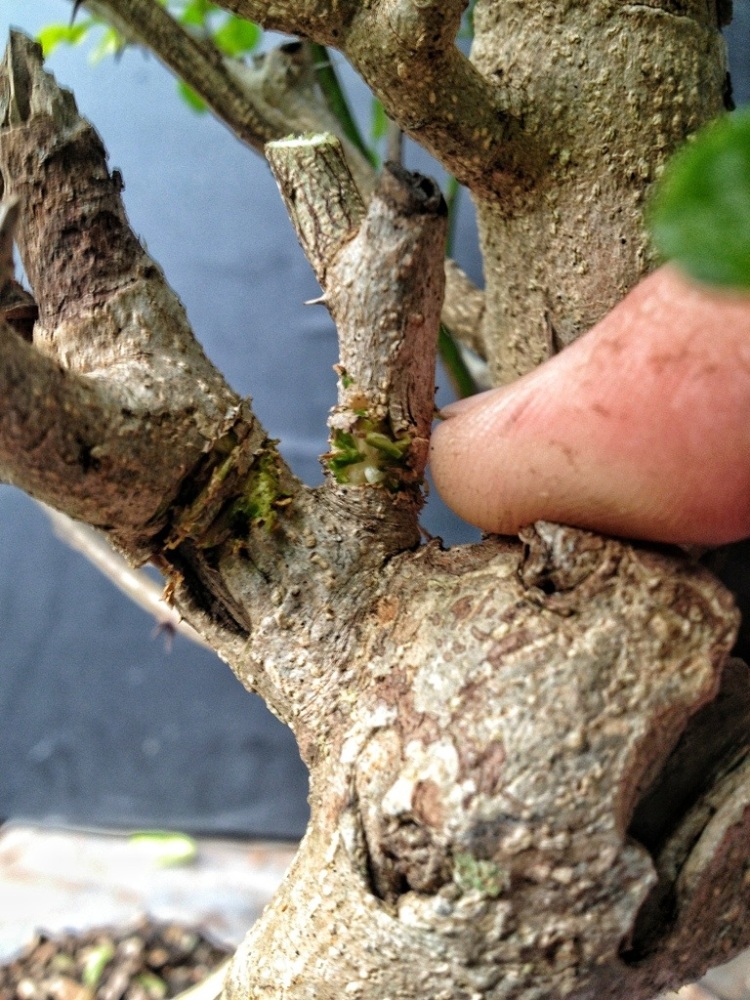 It’s easier to use Jin pliers but needle-nose pliers work too. I didn’t feel like getting up to get my pair.
If you do it right the bark will come off like a sleeve

It takes a little practice.
And here’s the result 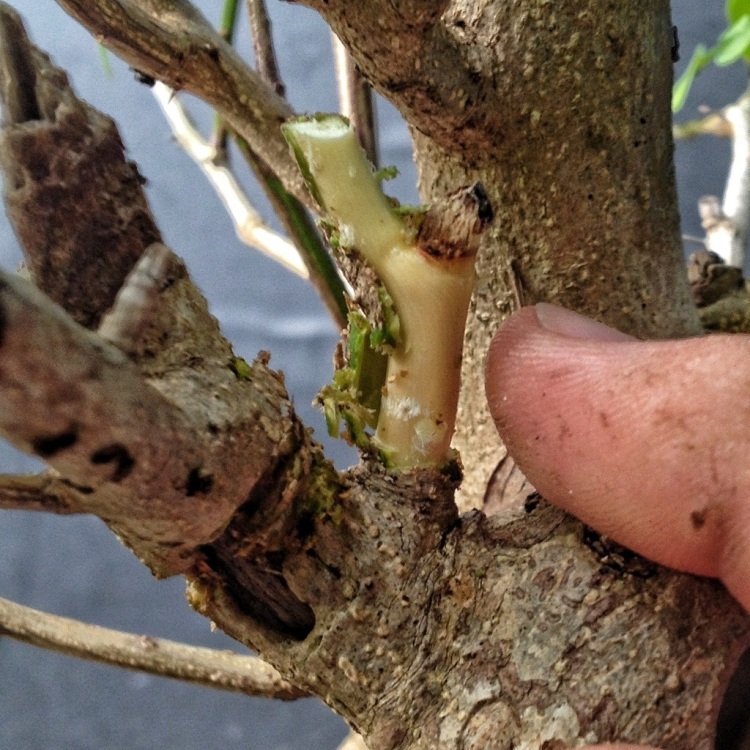 You have to perform this de-barking while the branch is still green; if you wait and the branch dries out, the bark will have to be carved off.

Like most of this above. Pain in the ass it is.
One more thing before I prune. This is one of those plants that have dieback the the next node. The nodes are where the thorns are 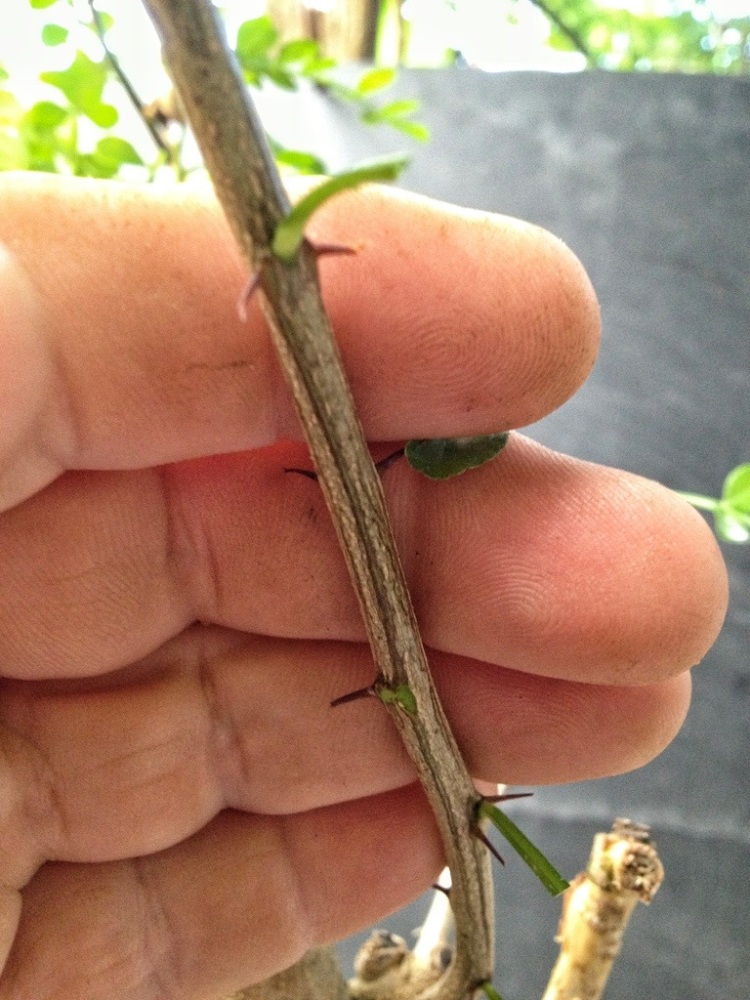 For the newbies, a node is the area where the leaf and branch bud emerge from (and often a thorn if the tree has them as well.) and if you cut above the node, all that branch above it will just die.
As illustrated perfectly here with colorful arrows and a nifty bracket thingy

The orange arrow indicates the growth direction. The red arrow is a node and the teal (TEAL!) bracket is the internode; that’s the part which will die back if I cut at the red arrow.
There will be an exam later, memorize it.
Here’s a real world example

Before I go further, I will de-thorn this tree 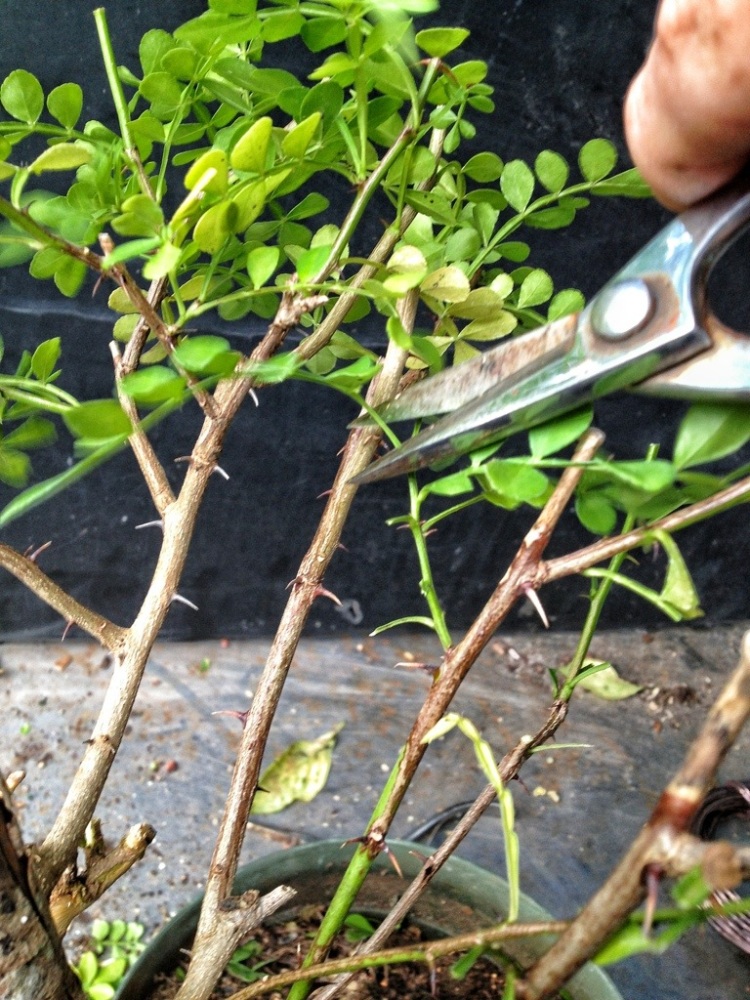 Bad joke warning!
I prefer prick-less ashes.
The thorn is a little like a rose thorn and you can almost just break them off by applying side pressure.
And my hands are tough enough to handle that…..ouch!

(Insert George Carlin joke -web search: prick your finger+George Carlin. Watch the video. You’re welcome)
The tip broke off and I ended up having to dig it out of my finger later with a pointy knife.
I’m here to testify, there’s nothing that hurts as bad as a thorn under the skin.
In retaliation, I butcher the tree mercilessly

It’ll grow back.
Now it’s time we turn our weird intelligences towards the root of our subject
(I have a million bad jokes, sorry)

If I could just focus on the roots, everything would be clear.
The roots on this tree are very fibrous and prolific. Which makes me believe that it can handle a pretty thorough root pruning with no problem.
Using my trusty chopstick I …

Damn.
I hate it when I do that.
Time to bust out a new one

Wow!
Where did I get this fancy thing?
I don’t remember…Dave, Jerry?
Anyway…
Rake, rake, rake…

I like when I get roots like this.
It makes me happy.
I would prefer for the tree to ultimately be potted in a round pot. But, since I am lacking round pots at the moment, this will have to do 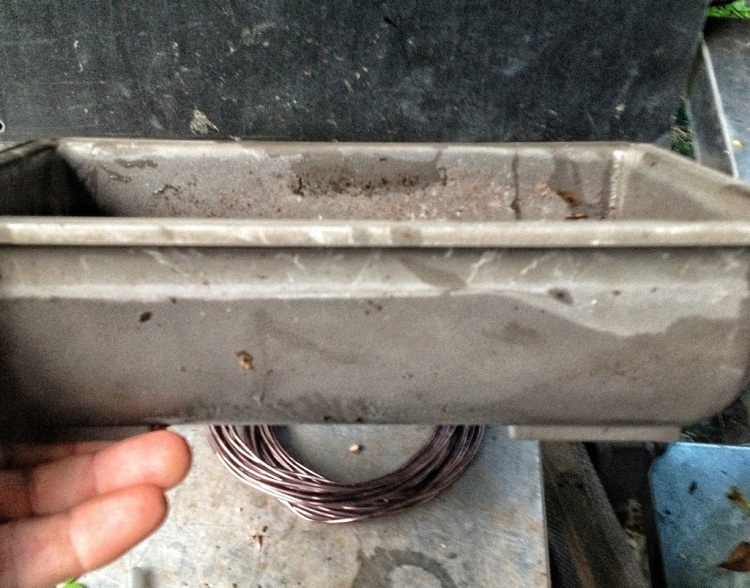 And of course, I tie the tree into the pot (To answer my friend Rob, it is four children and three cats. A perilous equation for bonsai) 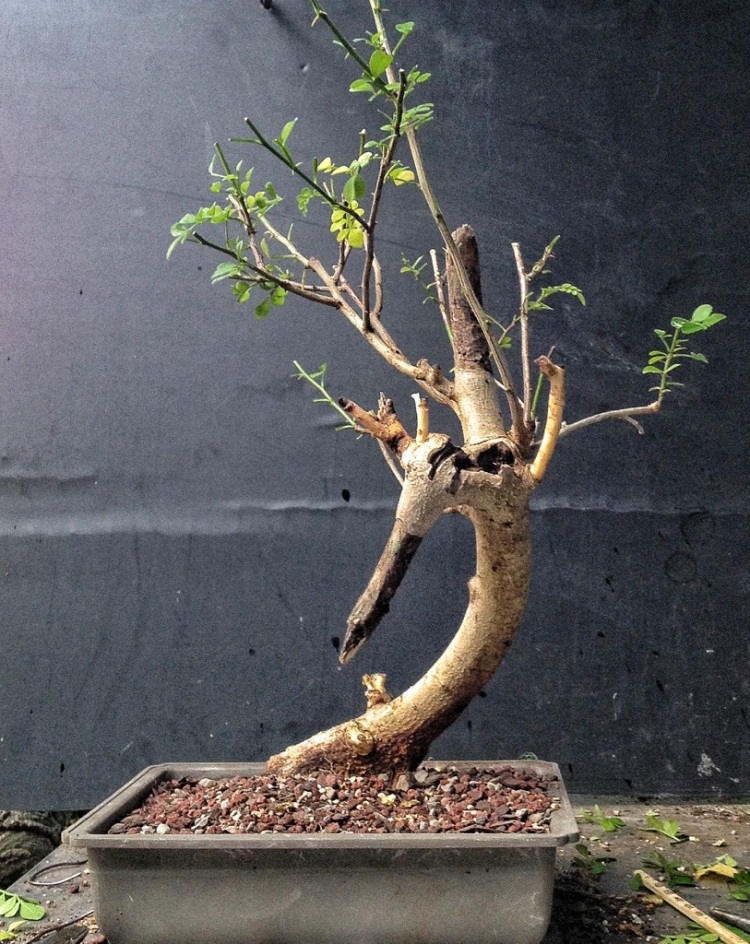 I am pleased by the basal flare. That was an unexpected surprise

I promise that I’ll do a wiring post soon, in the interim, here’s a progression 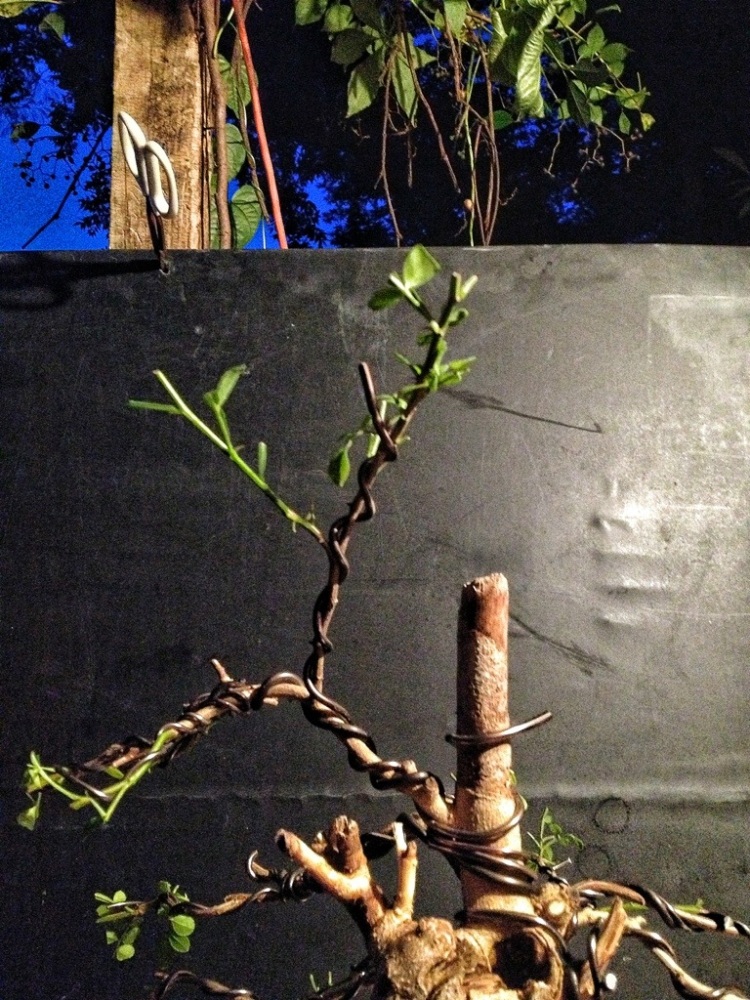 I bend the branches down to build the canopy and fill the spaces.
I expect new branches in the bald spot in back (this is a side view) 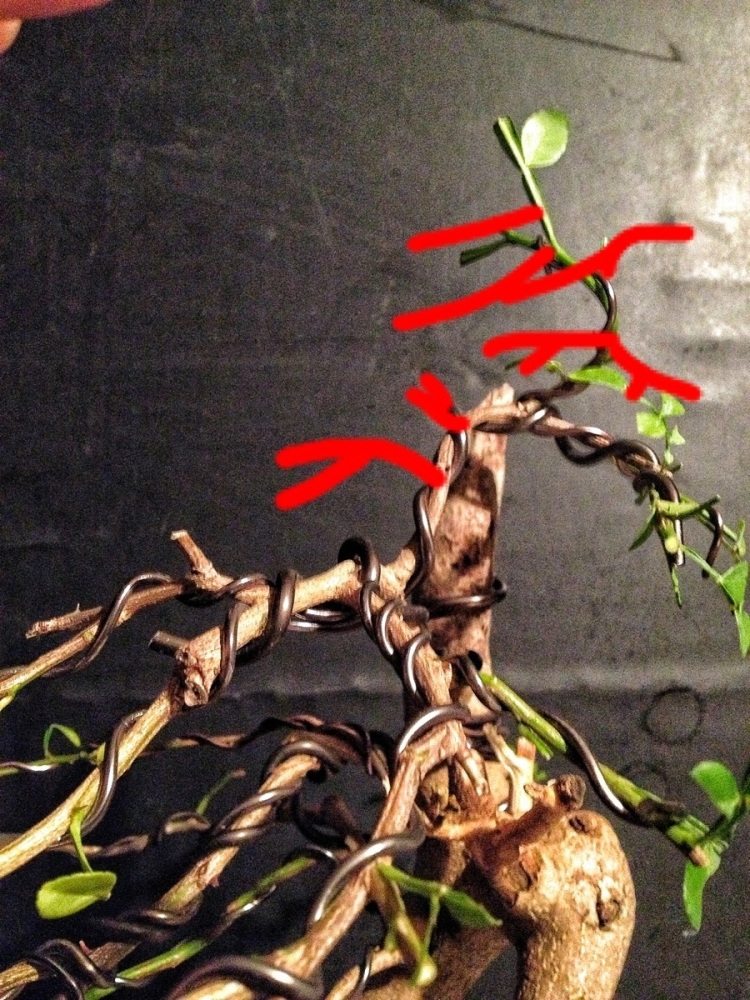 I will hold up on the carving until then. Expect the update to be a carving/repotting post, if I find a good pot that is. 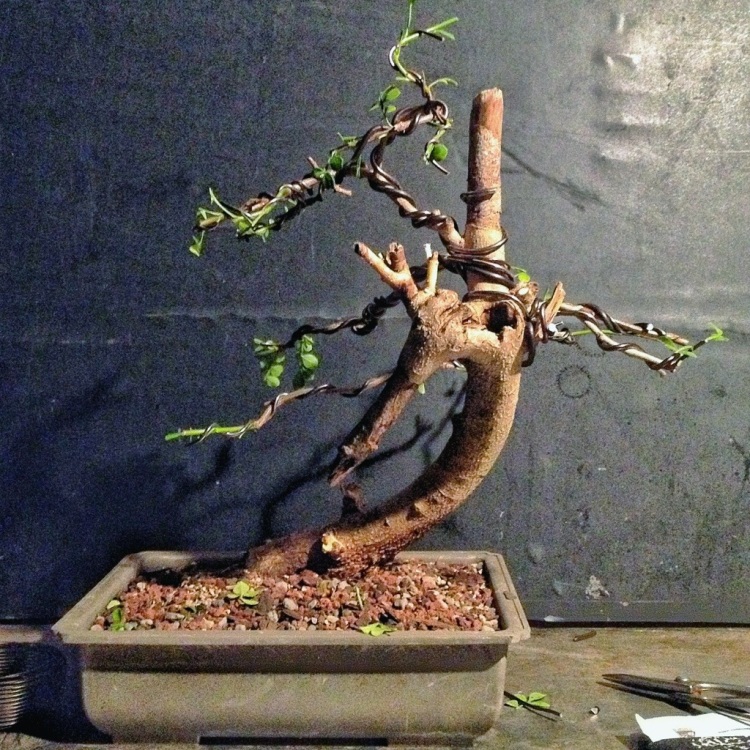 Until then, I need another tree to work on…..I’m sure I can find something around here…..