Sorry about that last post and those mighty ugly trees I had to show. But, as Tom said in the comment section, most of the time a bonsai looks ugly sitting on the bench.

Three trees for your perusal today.

All ficus salicaria (the willow leaf ficus- f. Nerifolia, f. Salicifolia).
I’m going to pretend I’m getting them ready for a show.
Speaking of shows coming up; this weekend, October 11-13 in Bunnell, Florida, the Kawa Bonsai Society is holding a special Joy of Bonsai show specifically for smaller trees. Up to about 12 inches tall.
Their website is kawabonsai.com for directions et al. 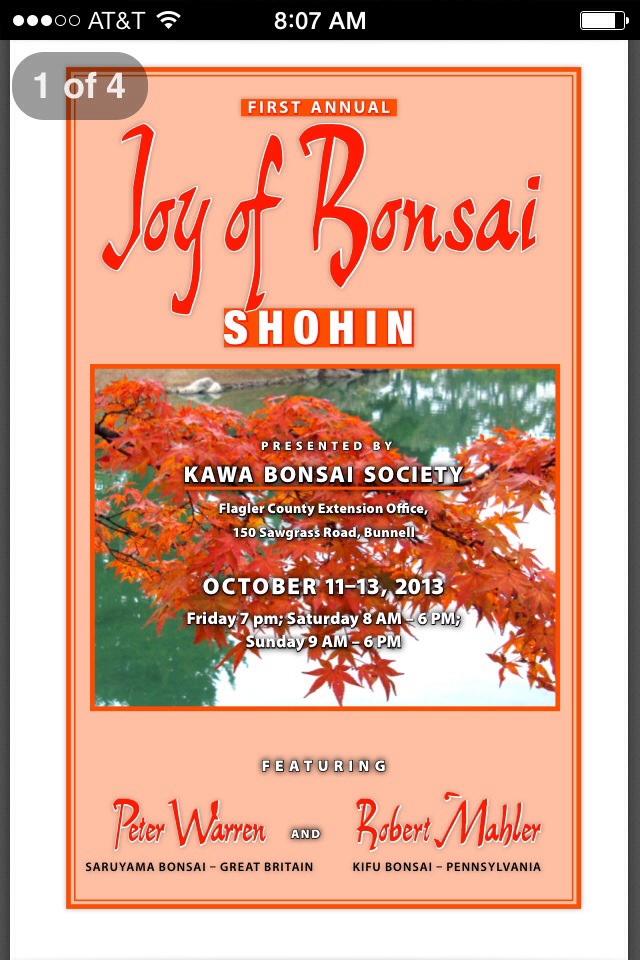 I would love to be there but I was scheduled to teach at Erik Wigert’s months before they announced the show. I love shohin trees and one of my favorite bonsai guys is Peter Warren.
And, unless you’re singed up for my class, you should make an effort to go.
Let’s talk ficus salicaria.
We will start with this one:

I originally got the tree from one of the best shohin artists in South Florida, Toby Diaz. The pot is by……I’m not allowed to say. He considers it a failure. I think its a serendipitous masterpiece.
The tree just requires a trim-

You can see that’s it’s extensively wired already but, looking at the next pic-

It’s grown past the wires about a half an inch.
It’s scissor time! 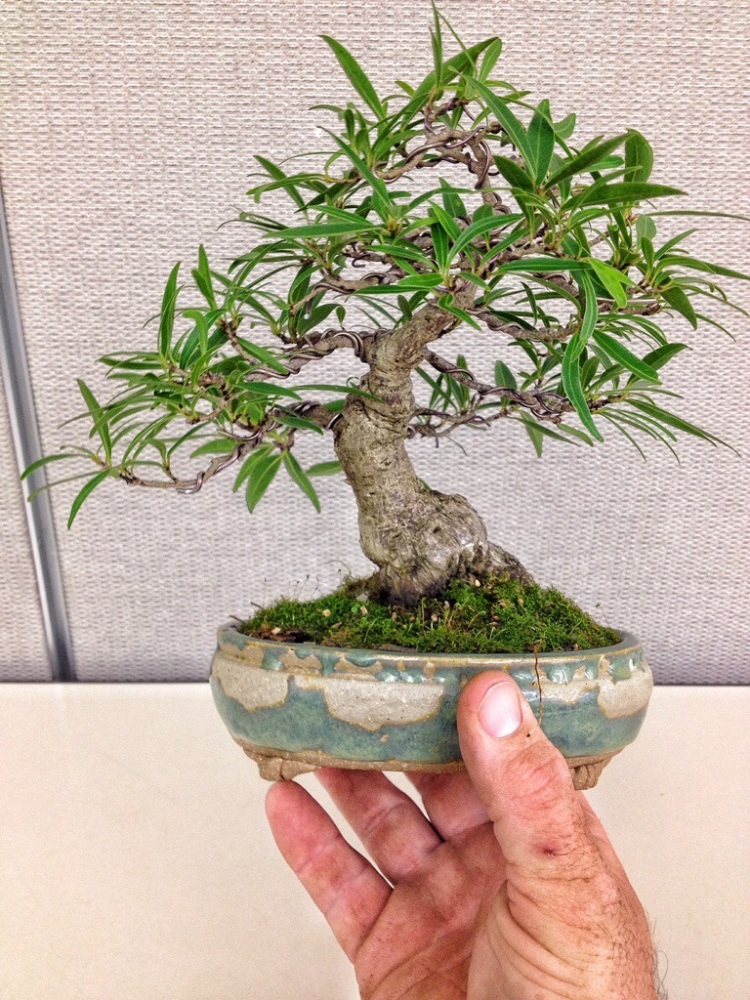 Jeez, what a messy man you are Adam. 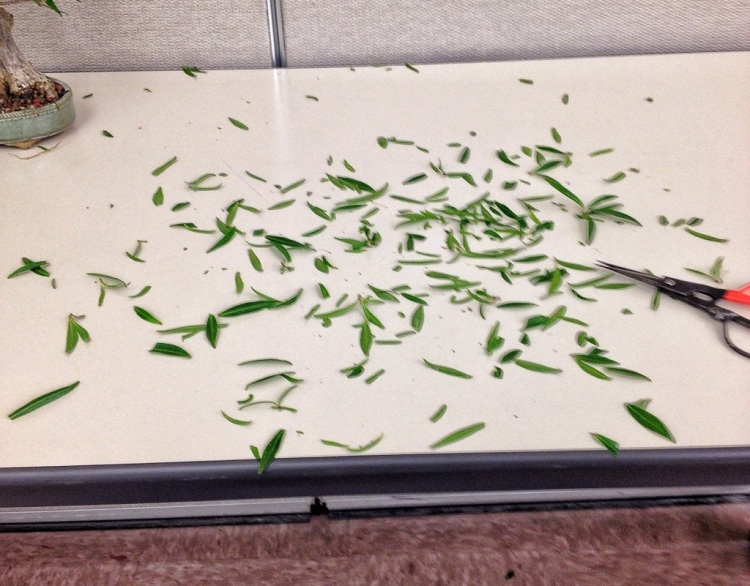 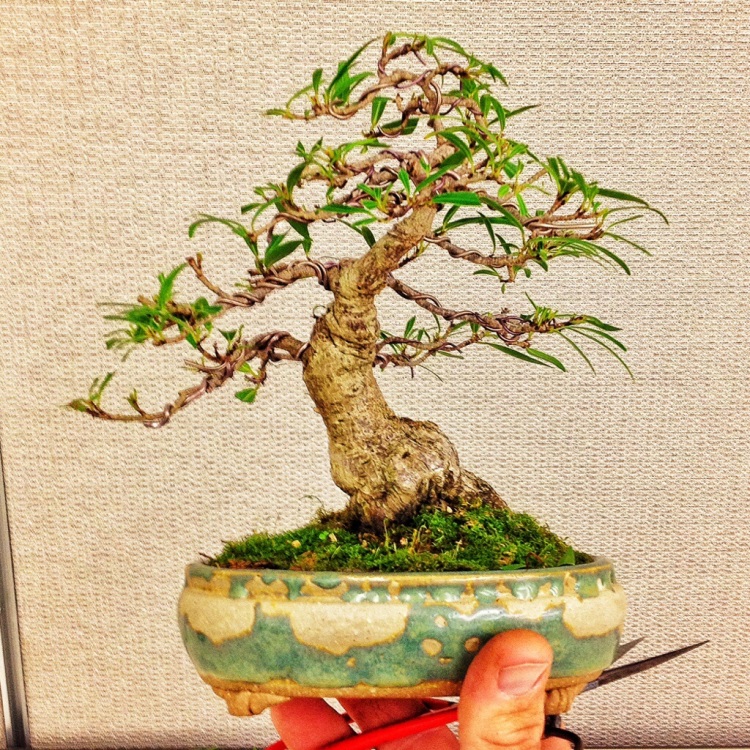 Basically what I did was topiary trim it but I made sure to trim each tip as well. From each trimmed tip I’ll get 2-4 new buds emerge and it will fill in nicely. If I do this about 2-3 weeks before a show I’ll have tiny bronze leaves and a nice, full canopy.
The next tree is about a half year behind the first one- 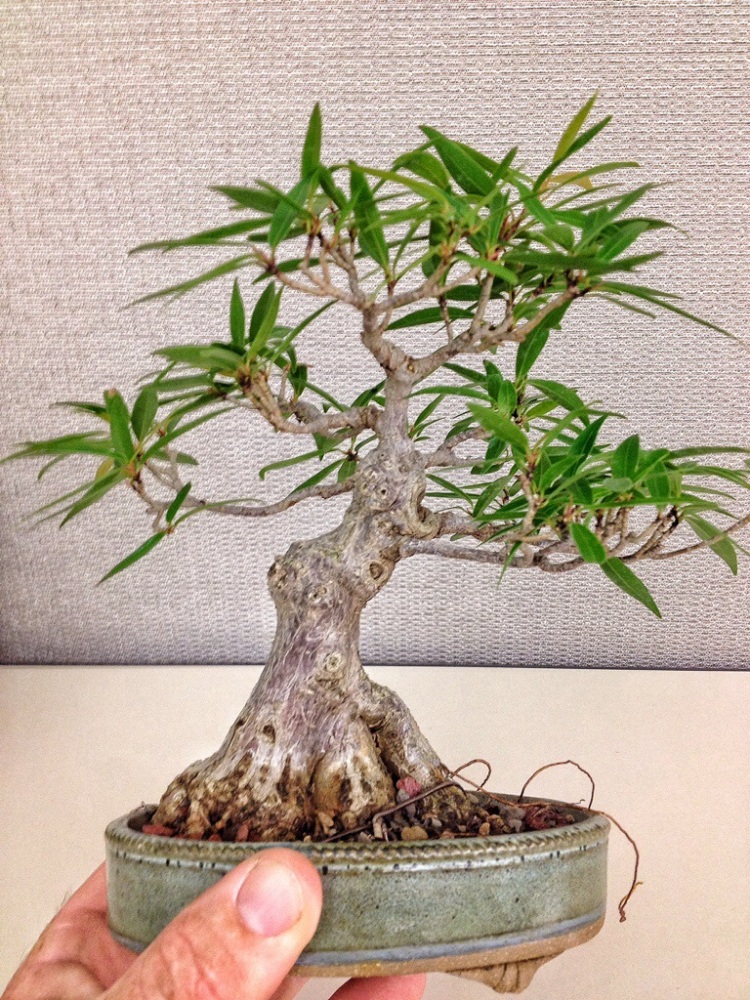 I got it from Jason Schley (www.schleysbonsai.com).
The base is magnificent-

from the front.
That’s ok, we can only look at it from one side at a time anyway.
This tree needs a trim and some wiring.

Trim above and wire below: 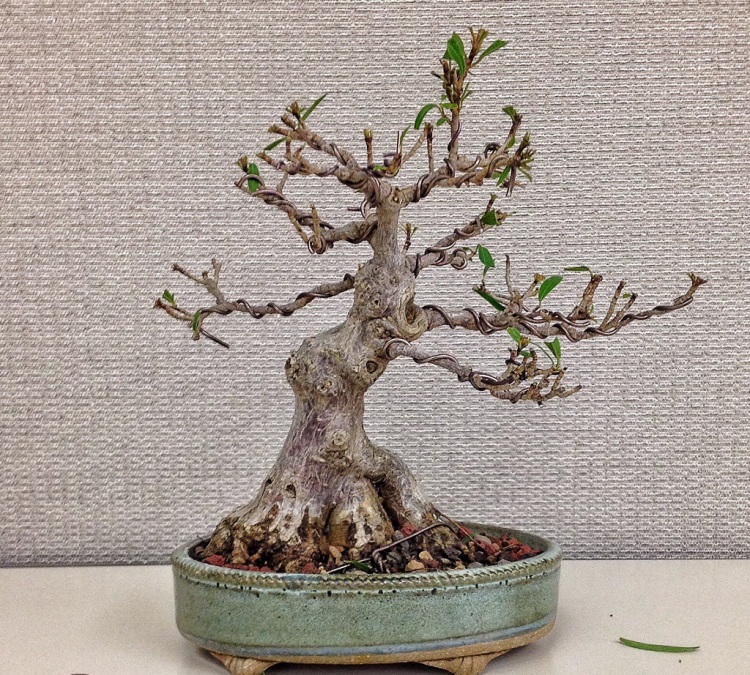 The pot is by Rob Addonizio (Taiko Earth Pottery), a good friend and a great potter.
Now to place the wires.
The tough part on this tree will be the apex. To achieve the rounded dome I’m after with that bald spot will be tough:

I think that’s about right.
I’ll put some moss on it when I get back to the nursery (you may have noticed the different background. I’m at a Central Florida Bonsai Club workshop. Check out the website: www.centralfloridabonsaiclub.com for our schedule and visit us when you’re in Orlando for a vacation. We meet twice a month so that should be easy. The hard part is convincing the family to let you go.)
The next ficus is the furthest along development-wise:

And I’m going to try to wire a only a few branches and keep the foliage intact (which is tough. I’m an “every branch” kinda guy)
But I’m going to pretend the show is tomorrow.
The wiring that needs to be done is on places like this:

The branch has been wired several times but, as a ficus is want to do, it grows back up in time.
A little bend-

And that’s what the wiring will consist of; little changes.
Get to work then already.
I do need to trim the tips and the odd growths- 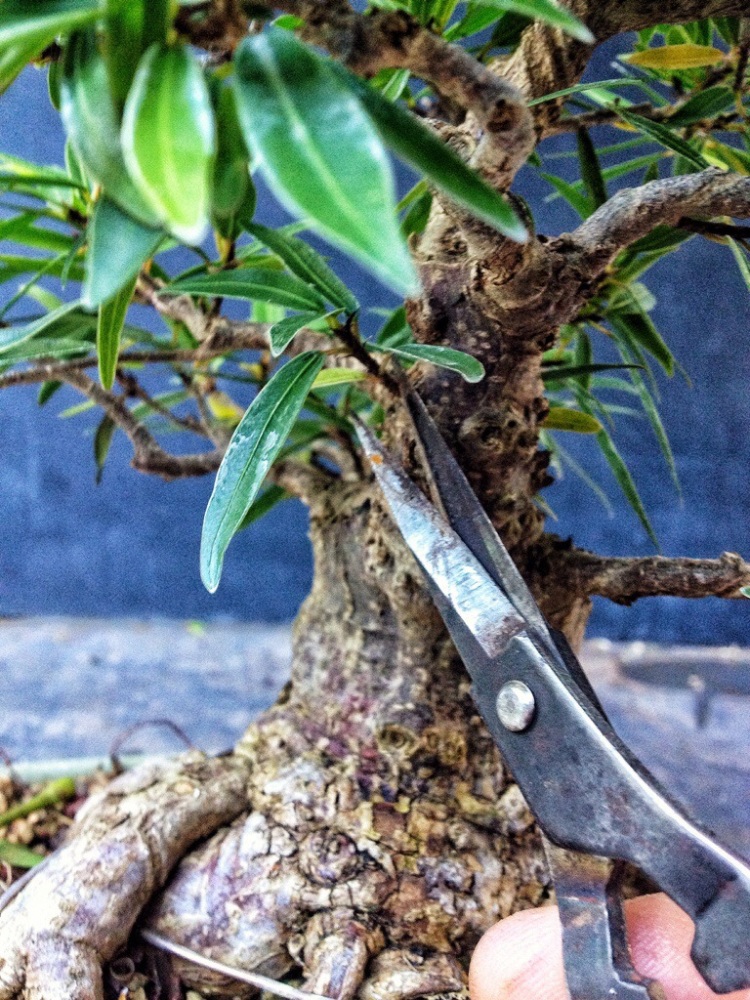 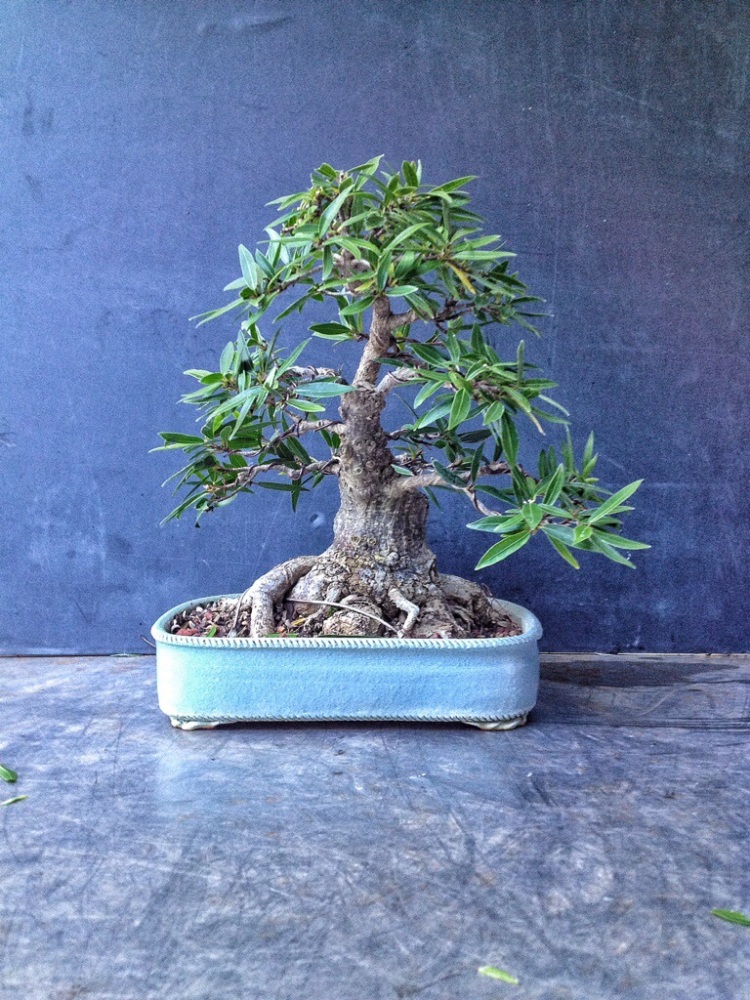 I couldn’t help myself. Really. I had to add more wire.
It’ll grow back quickly.
Now for the moss.
I’m not happy with the root base on this tree but I don’t want to do any serious chopping on it now, so I’ll hide it with the moss.

What I don’t like is this root. In the spring I have two options; cut it off or excise the one below it-

The problem is the roots cross over one another and one is on top. My biggest pet peeve is crossing, tangled roots on a ficus (unless the design calls for it, of course).
So, since I’m pretending that this is going into a show I’ll hide this “ficus bonsai etiquette breach” with moss.
I don’t need this wire-

Not bad, right?
The pot is another Rob Addonizio creation.
I got the tree from my club somehow. There was a beginners class (I didn’t participate, it was a year before my joining) and this tree was either left over or was used for demonstration purposes. I either won it in a raffle or in an auction.
Paul Pikel (of orlandobonsaiTV YouTube fame) was the teacher of that class.
I promised some moss on the second tree.
Here’s a tip:
When placing the moss, overlap the pot edge and then, using the spatula feature on your tweezers, tuck it in.

There is a lot of confusion about moss. Generally, I only put it on if I’m going to show the tree or if I need a little more protection from the soil drying out. I have written a post on it (click here).
Anyway, time for the spread: 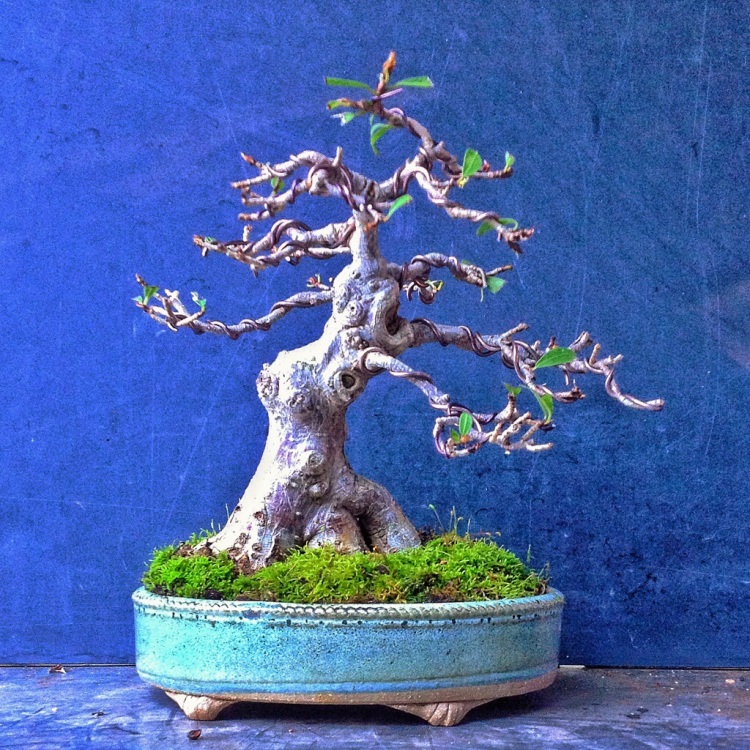 The next post will be on carving tools, safety and some technique.
It feels like homework because Erik is making me give a PowerPoint presentation for the class next weekend so I figured I could do a blogpost and translate it over. Still feels like work.
Wish me luck.