This is it.
The body bag.

I’m afraid it was pretty brutal.
I was asked to do a demonstration for the Central Florida Bonsai Club (my own club) on two old, large ilex vomitoria schillings.
Here are the victims before the slaughter.

With this being my club, I didn’t pull any punches in the styling process on these poor trees. 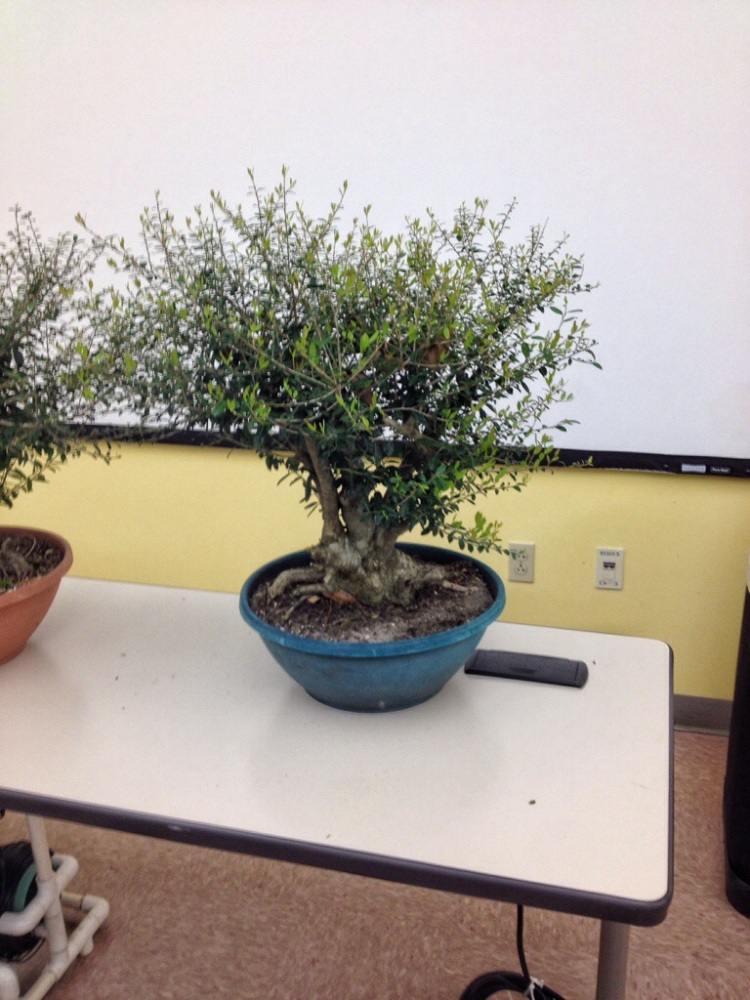 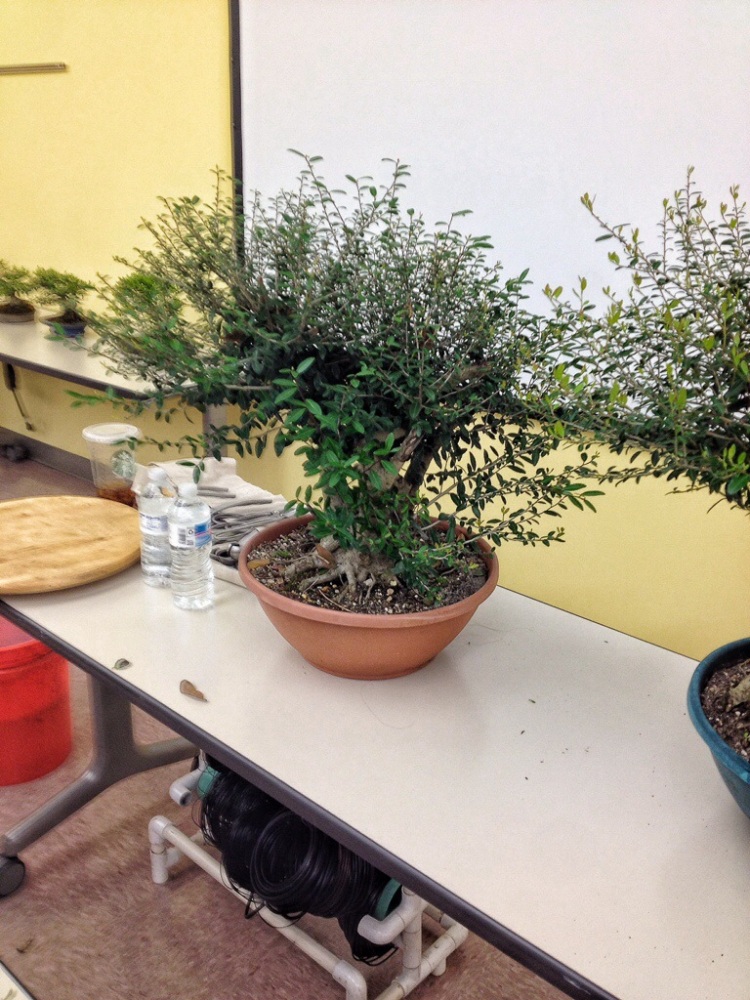 I took them back to where they needed to be in order to build a tree.
No more, no less.
I wasn’t grandstanding or showing off.
I chose an honest, brutal route in my demo instead of the safe route.
And they trusted me, which is the amazing thing.
First, though, we spoke about the schillings….my favorite tree.
I brought along several trees from my collection that demonstrated one point I was trying to make.

That point being: how adaptable the tree is to so many different styles.
The tree above is a very naturalistic tree.
Below, a very stylized tree.

The next tree is very nice (when it’s filled in). 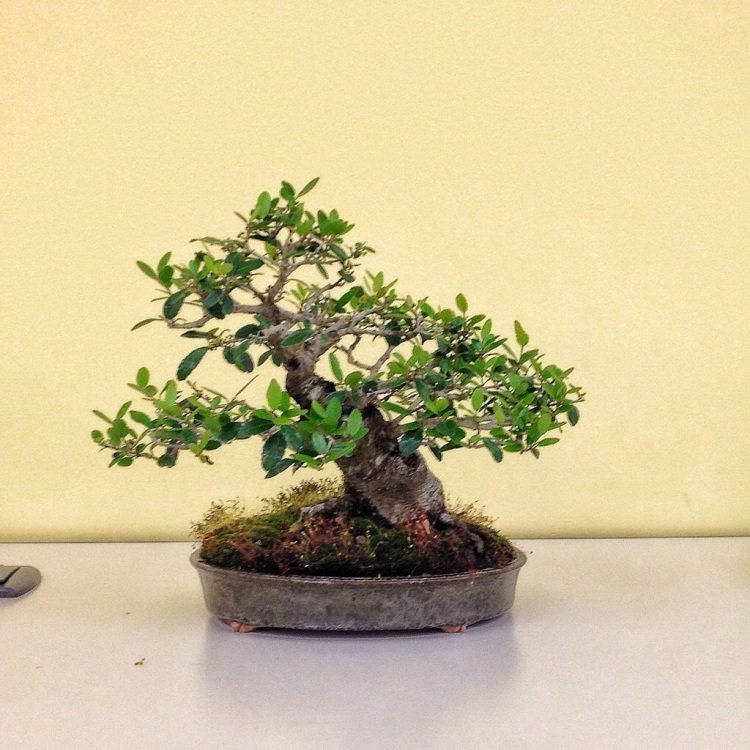 You’ll have to take my word for it.
Next we have a big pig. Almost a Hershey’s Kiss.

And then a very striking and unique tree. One of my favorites.

People hate it or love it.
It’s old looking and gnarly but it breaks so many rules.
I then explain to them about The Black Drink and how it doesn’t make you vomit and all that (a tea made from the leaves was the favorite drink of the native floridians. It somehow was mistakenly thought to cause vomiting. I just think it was a conspiracy to sell more coffee myself…but that was another, previous post though).
Regardless of all these trees, I still have a demo to do.
First tree! 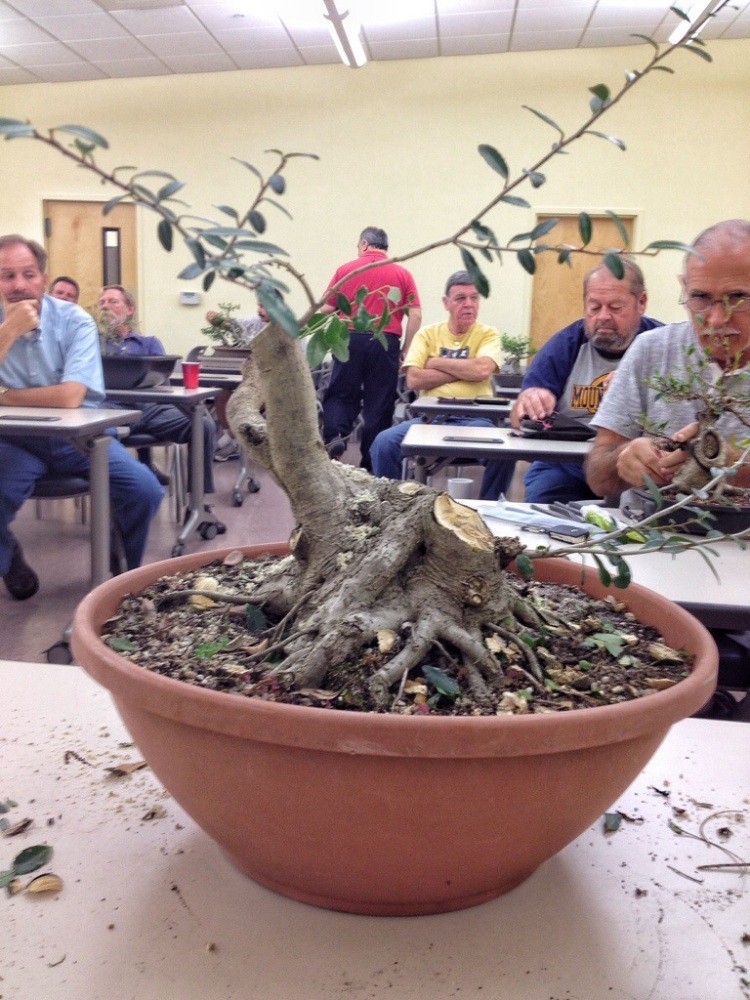 I warned you.
Look at the reactions of the club members.

I did leave a few branches to wire.
Mostly to show how flexible the new growth is.

The apex won’t stay like that, I literally corkscrewed it in the illustration of another point:
Young branches can be wired.
But young branches are also important for horticultural reasons too.
The process of developing an ilex is one where we want to keep the young limbs and remove (gradually) the old, inflexible ones.
By doing this we can obviously wire them but it also keeps the tree growing and vibrant.
One complaint against the ilex is that it gets old and declines.
If we keep cutting out the old branches and replacing them with new ones that problem doesn’t happen.
On to the next tree.
Before: 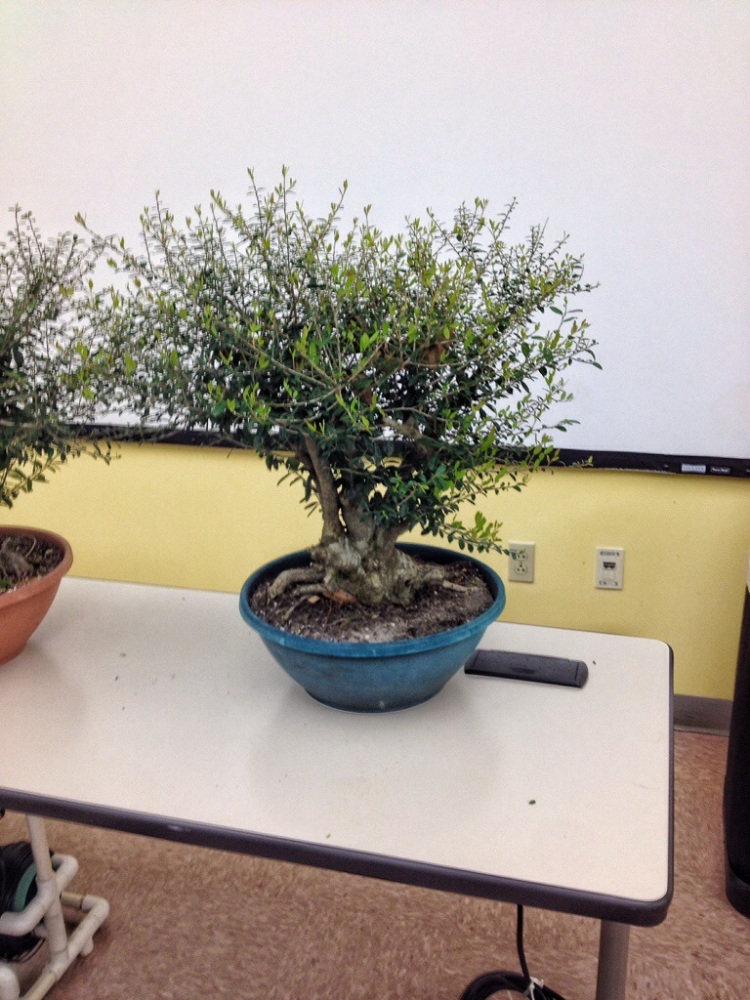 And after some of my subtle ministrations.

You’ll notice on this tree I left knobs instead of cutting off the old branches flush with the trunk.

The reason for this is twofold. Both horticultural.
First, the latent buds cells are more present at the base of the branch knob and if you prune flush to the trunk (as is usually taught) you’ll lose all those cells.
Second, the pruning scar has a better chance of healing if a new branch if nearby. 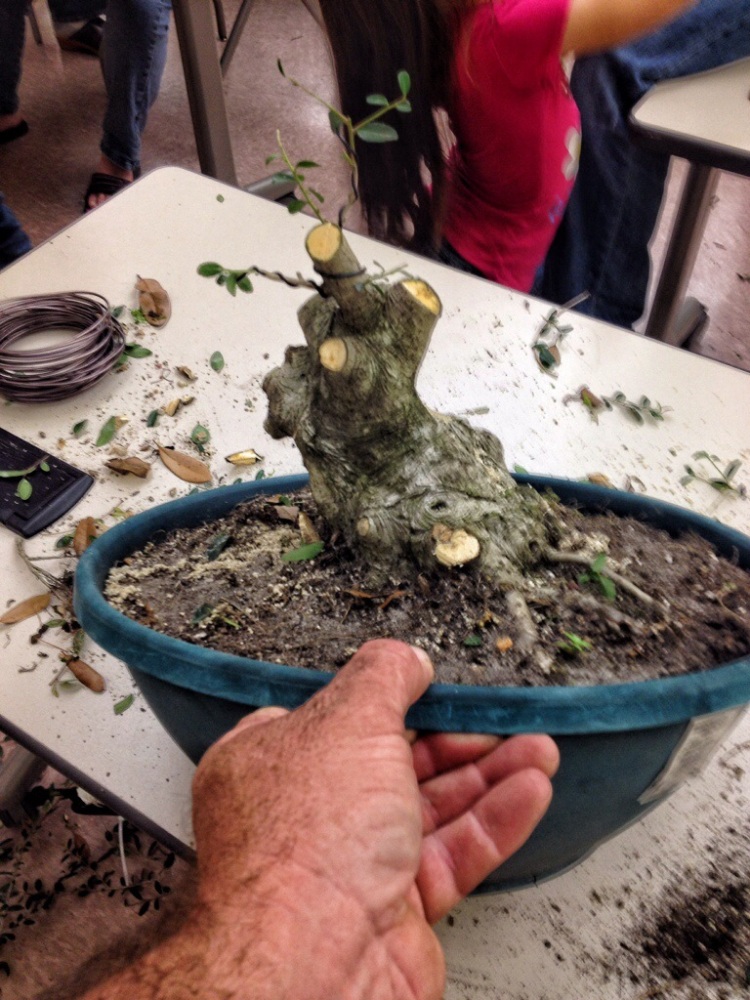 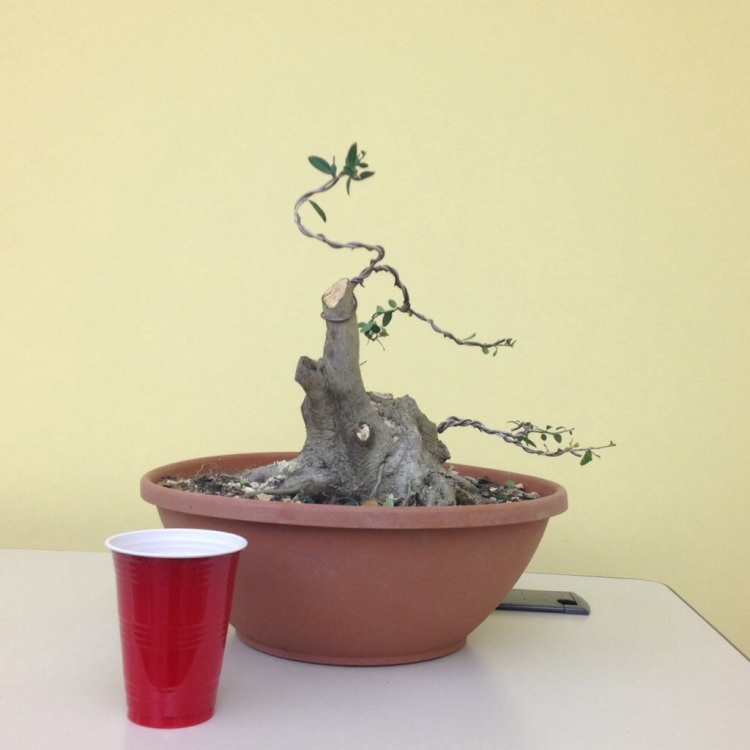 The club held a raffle and the winner got to choose which tree they won; the other tree will be auctioned at our June picnic.
Juan, as usual, won. He was very tickled:

He chose the second tree for some reason.
The first tree will have a sketch to accompany it at the auction. 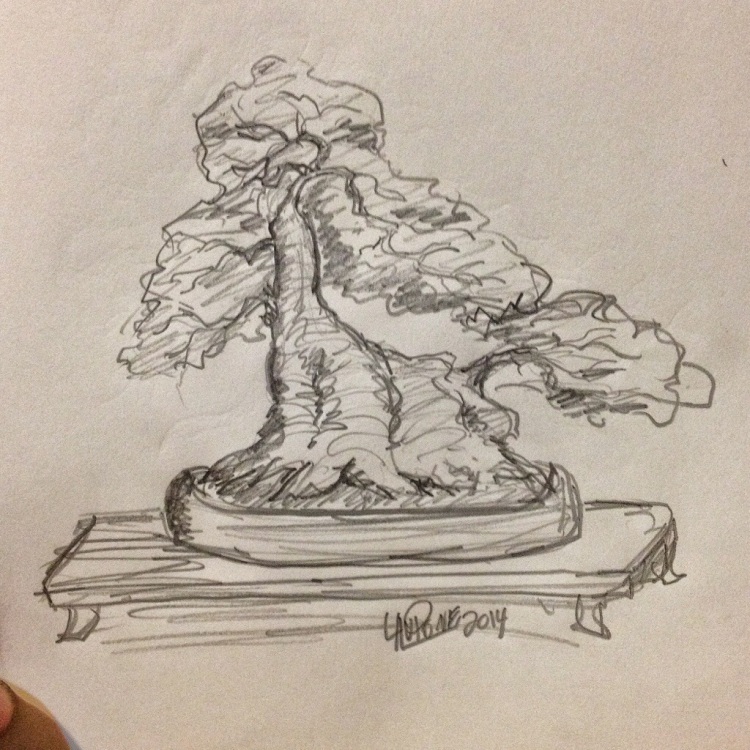 Which will hopefully help the winner see the tree after my mutilation.
What I did won’t kill these trees.
The club members are used to chopping trees back to bare bones, we did grow up with the originators of Florida bonsai doing the same things.
The growth rate in Florida allow us to do these insane things to trees and we know that it grow back within the season.
So, no tears, no curses at my wanton pruning, these trees will survive.
And that’s all.
I bet a few of you were hoping for blood though?
Don’t deny it, I know you.