Nick came over the other day to work on his big ficus microcarpa.
It is the very beginning of September and, considering that he wanted to repot the tree, he came in the nick of time to do it…..sorry, I had to make the joke, but seriously, this is the absolute latest I would repot a ficus in Florida.
Well, maybe I might consider it if it were a warm winter.
Anyway, here’s his tree. 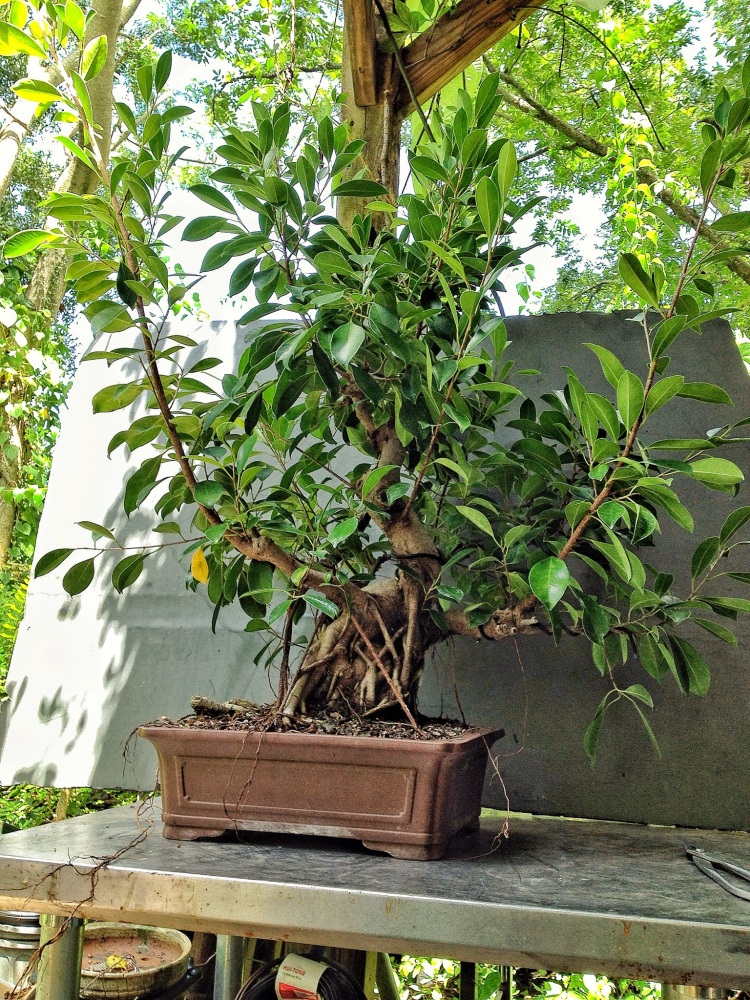 Nice base and trunk.
I noticed these damaged leaves.

This is thrip damage. I usually treat with a systemic insecticide called Merit. The name of the active ingredient is Imidacloprid. It is also the active ingredient in the Bayer Advanced 2 in 1 products.
Let me stand upon my soapbox for a moment.
Actually, let me not, except to say this: I just erased about 800 words about this insecticide, about bees, and about organic vs. synthetic insecticides; there is way too much controversy for me to expound on that subject here.
Maybe I’ll write another post in the future. Not now though.
Back to Nick’s ficus.
If you open the leaf.

You’ll see the thrips. Nick has treated the tree already but if he hadn’t, the bugs would be moving. 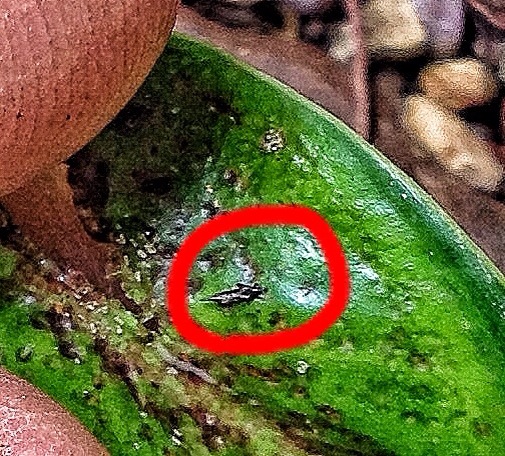 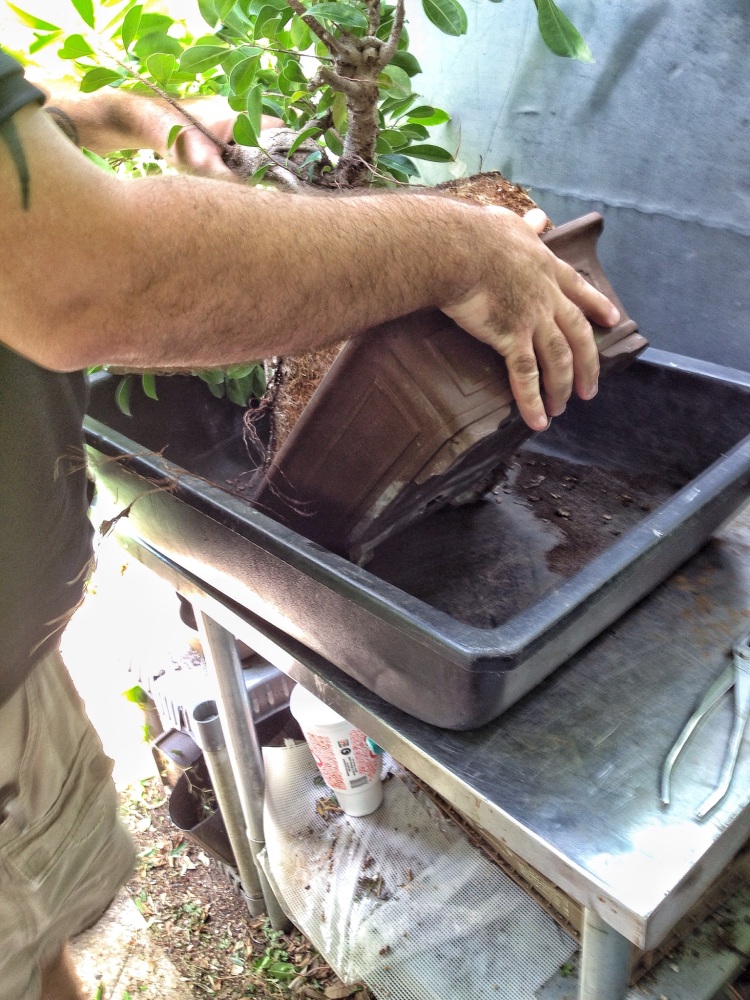 This is one year root growth.

Nick says it looks textbook.
Seems a shame to rake it out.
And a lot of work.
I let Nick do it.

He is here to learn, after all.
We find some big roots that need to be removed. 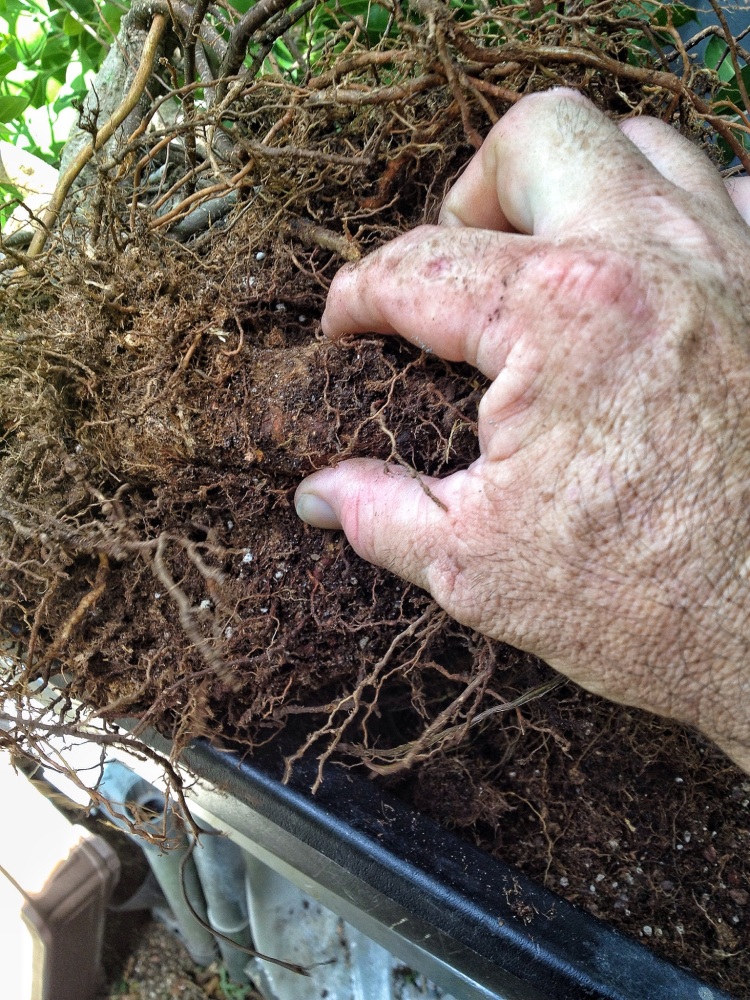 At this point you’re asking, “Why bother cutting off those roots when the tree obviously can fit in the pot with them there?”
It is true that the tree fits in the pot as is.
But we should prune in anticipation of future growth.
A big root takes up room in the pot that could be filled with the small, productive, feeder roots.
Big roots are there to hold a tree into the ground, we have wire to do that in a bonsai pot.
Sooooo…..

Gelded.
I feel like I’m holding up a prize pig.

New soil, Nick brought his own but it’s identical to mine, nothing to say about it except I sift more.

There’s lots of room for the roots to grow, which will come in handy with what we do later to the tree.
We tie it in, and do some chopsticking.

And a little arranging of some aerial roots. 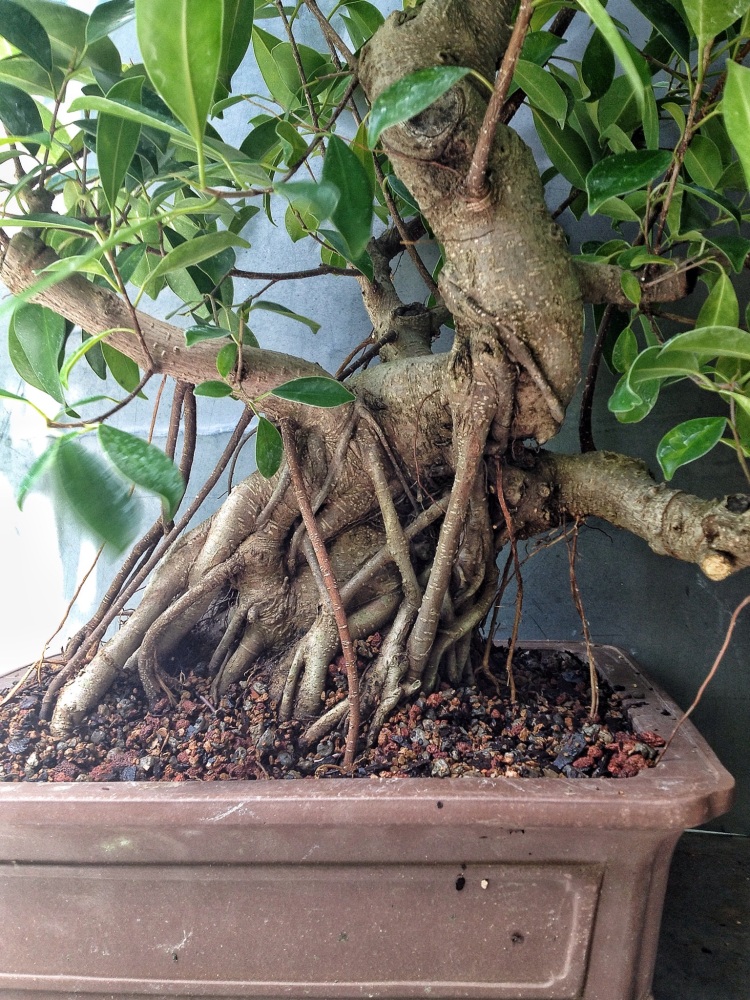 Fantastic!
Ok, with that done, it’s time to style. 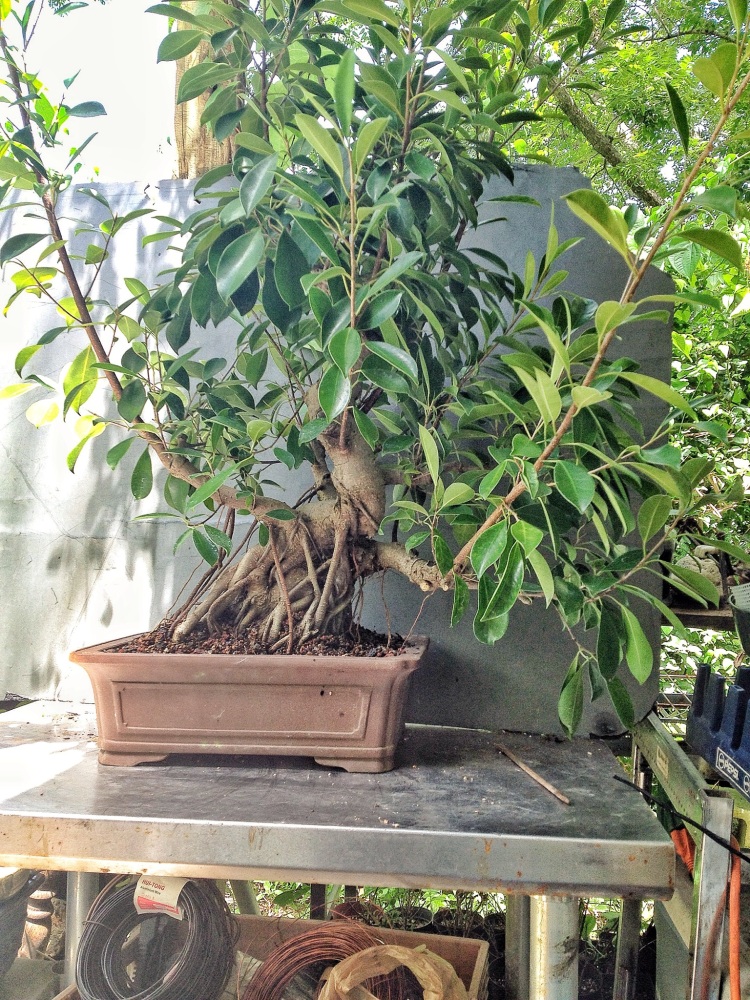 I set Nick to the task of defoliation.

Nah, I’m not that mean. We pruned out the unwanted branches first.
Then I made him defoliate. 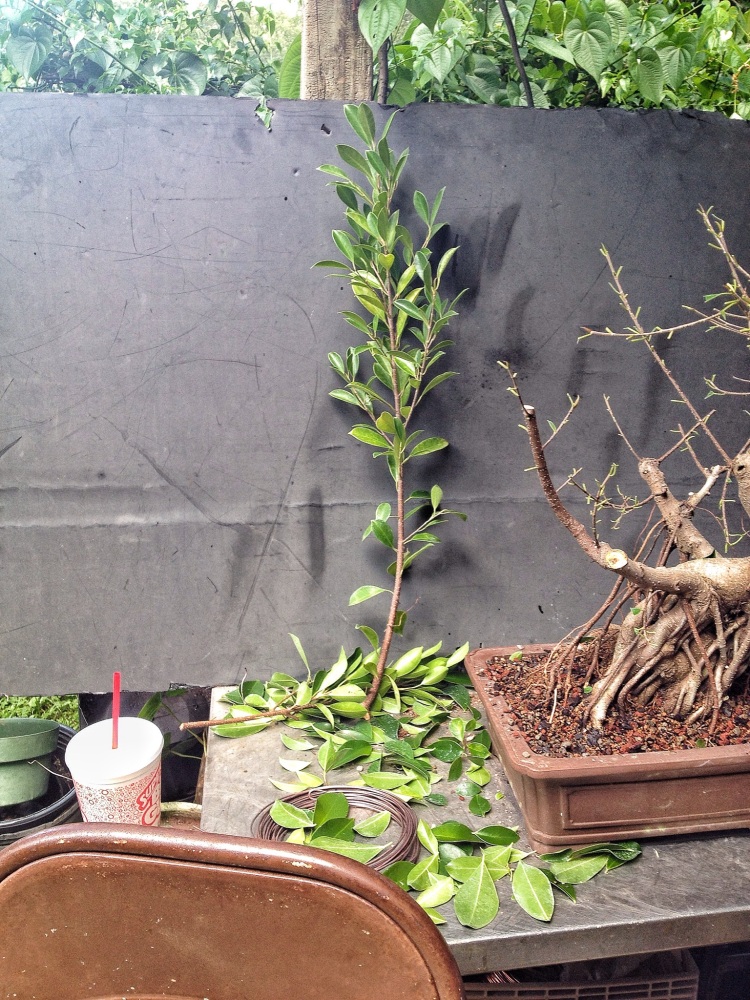 Hee hee!
The one long branch I have propped up next to the tree above is just one year’s growth. Makes you wonder why you don’t live in Florida, right?
Now we come to the hard decision.
The big gimmick of the blog.
See the problem?

The big part of the branch is just unbendable.
The end part is bendable, but it’ll just look bizarre. 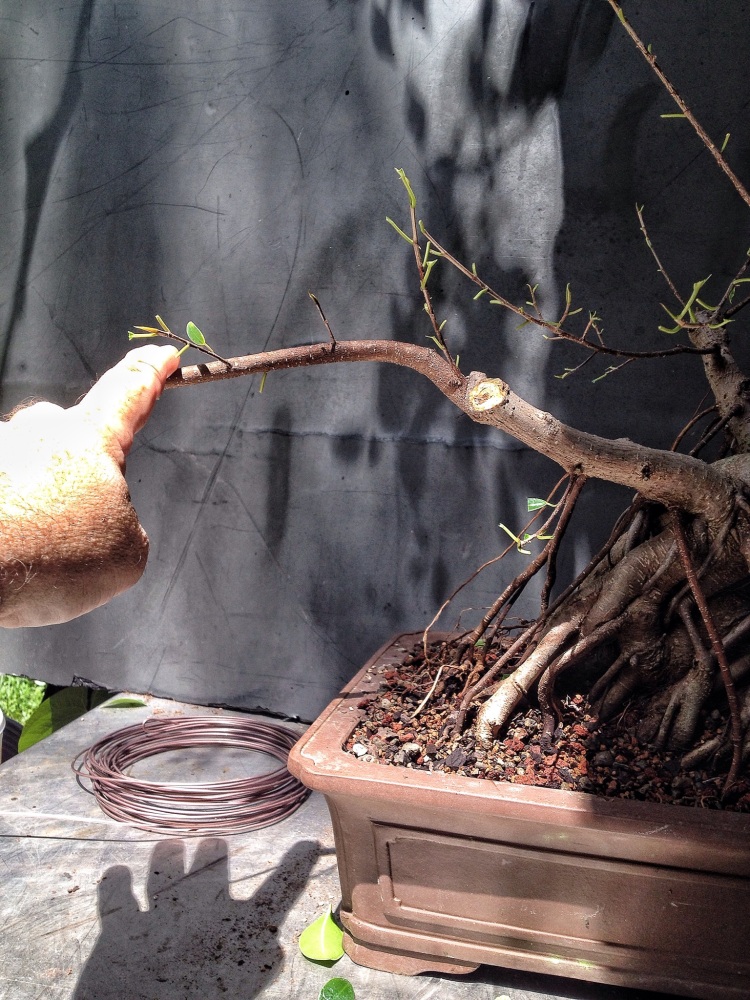 Here’s my proposal to Nick.
We cut it here. 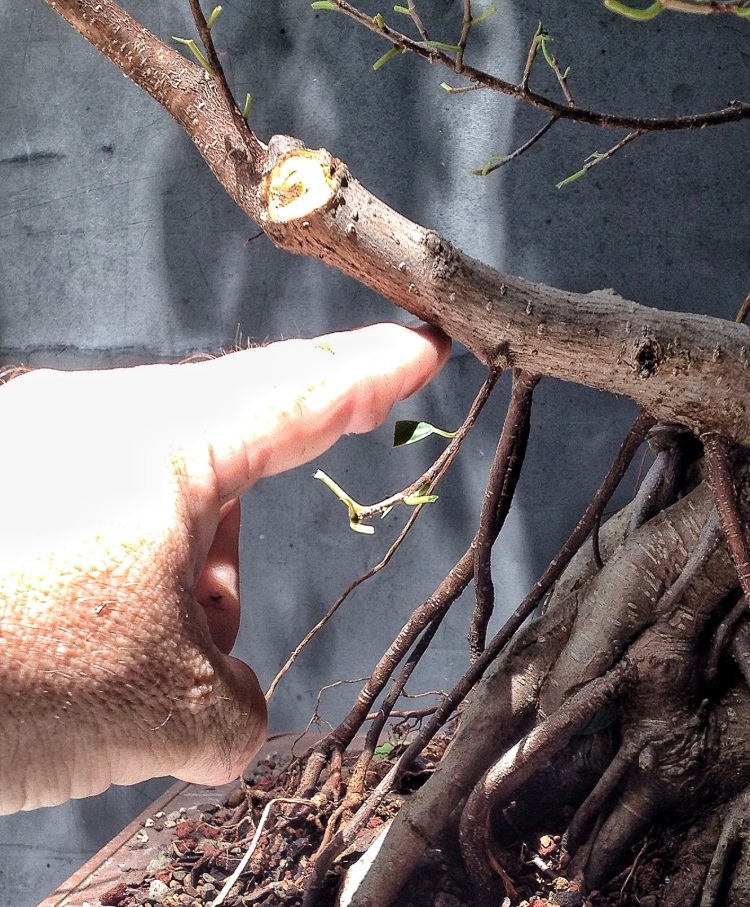 Whoa man!
Drastic, isn’t it?
No.
I take him out to the display area and show him this ficus.
Which we will call exhibit A: 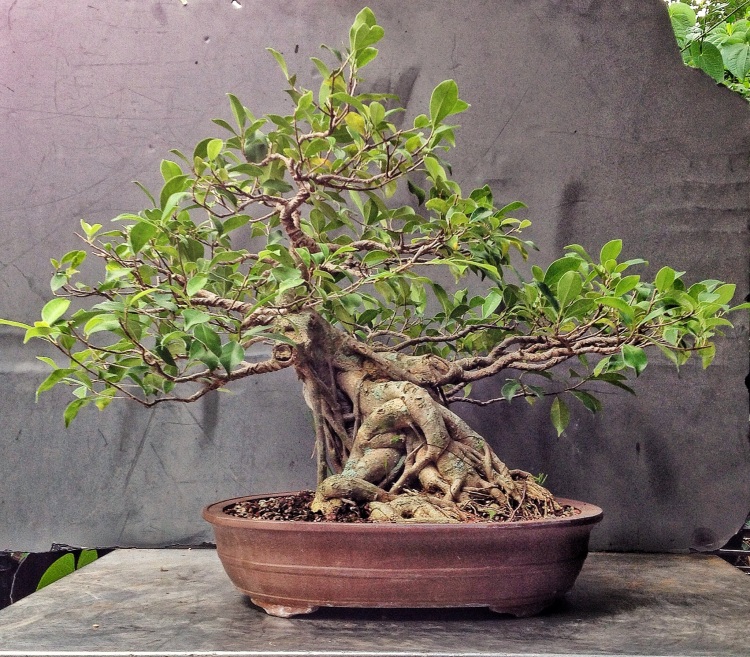 I did the same branch chopping on this tree.

Aha…look what’s waiting for us out there. 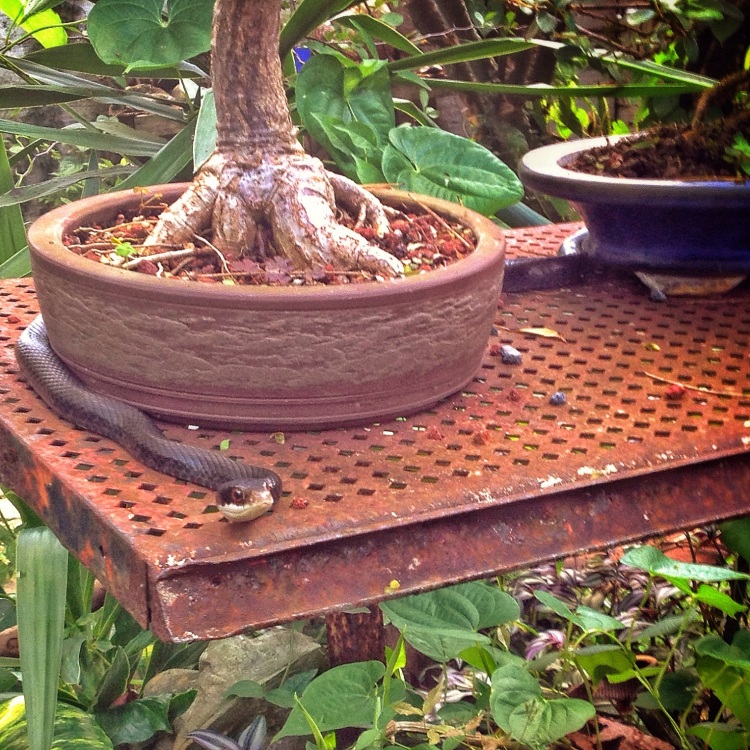 Do not tell my wife.

Cute guy.
I was talking about the snake, sorry Nick.
You know, maybe you should tell my wife about the snake. Then she won’t come outside and bug me so much when I’m working on my trees.
Back to work, leave the snake alone.
Time to chop!
Nick took this picture. 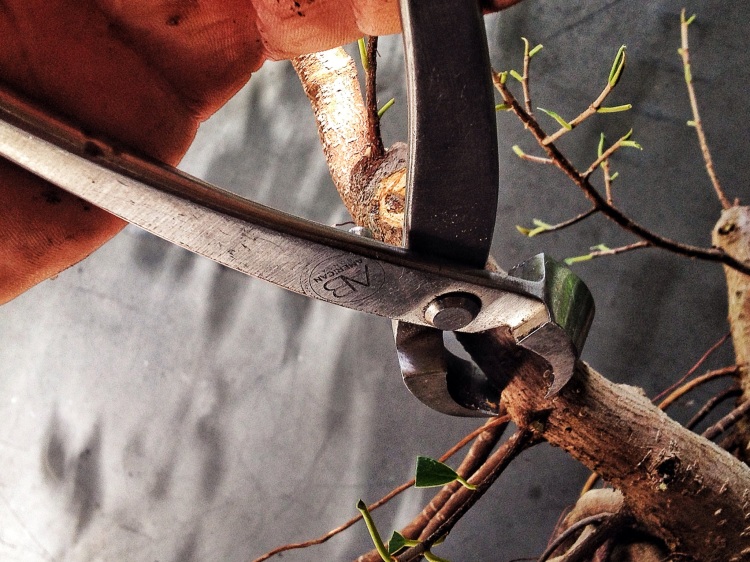 Did I mention that he’s a photographer?
He got all dramatic and angular and everything.
And…. 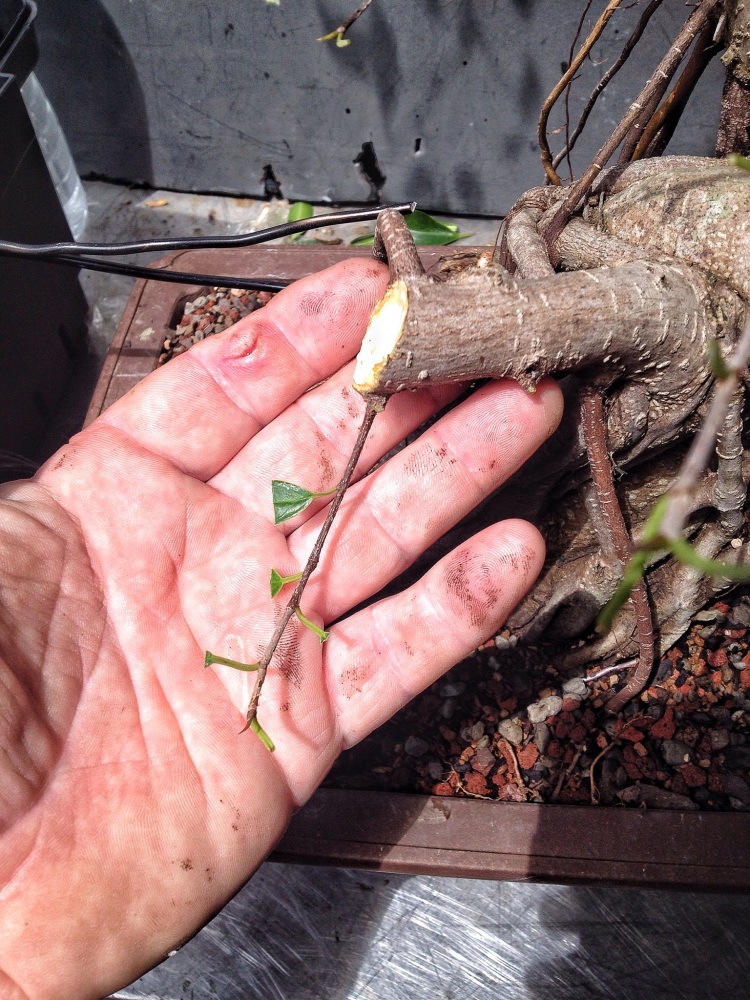 Wow! That is a bit drastic.
It’s done now, it’ll grow back.
How about some wire?
In fact, I’ll give you some quick tips.
First, here’s Nick’s solution to the wire holder question.

Next, I have invented a device for sale (only $19.99) to measure the angle of the wire as it’s wrapped on the branch.

As we’ve all been taught, the angle must be 45 degrees, no more, no less.
Just like this….

Ok, maybe not. The angle really depends on a few things.
First, how tight a bend you are making.
The more extreme the bend, the more obtuse the angle. The more flowing the bend, the more acute the angle.
Next, is it against the law to cross a wire?
Why, yes it is, the Bonsai Police will take you away…..
You should know better.
Look at this scenario. 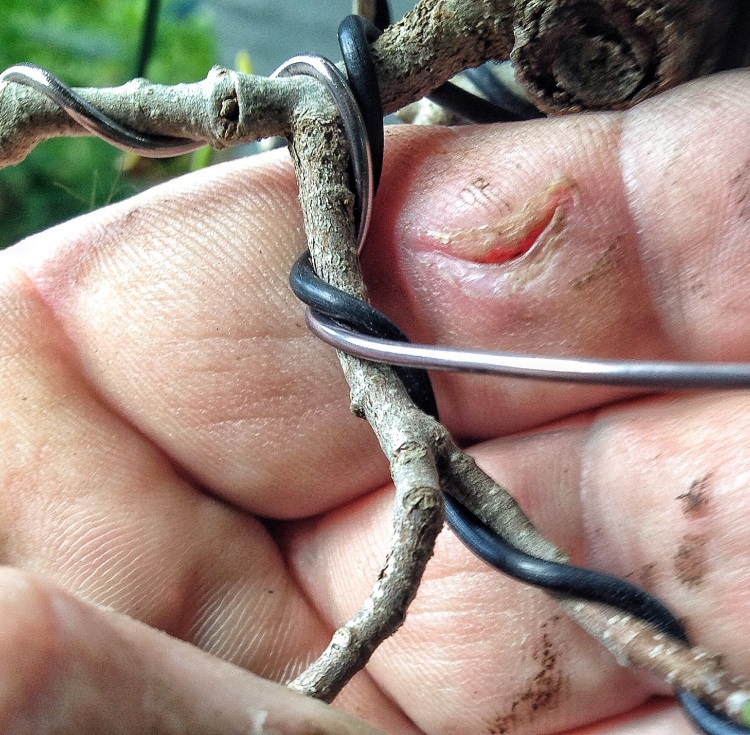 I need to wire the left hand branch on the fork.
If I use the “no crossing wire” law, I will not get a good anchor on the left branch.

Even if I started the wire from the branch tip it’s the same thing.
The wire just isn’t anchored and with a bump the branch could just break off.
Here’s the solution. 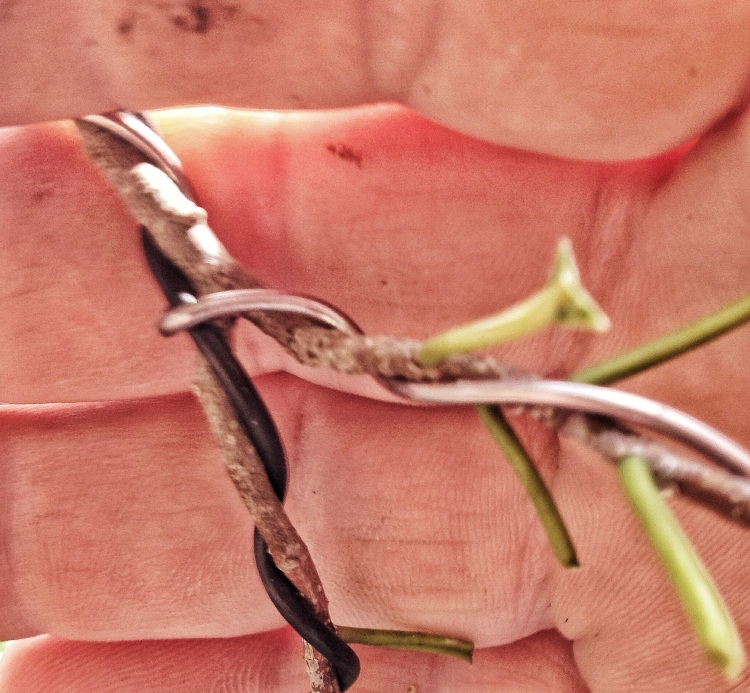 What are the reasons people say you shouldn’t cross wires?
It’s supposed to create a pinch point and cause the wire to cut in faster.
That’s an easy one to answer: Ahhhh, it is metal wire, if the tree grows, the metal isn’t going to stretch no way, no how anyway.
The most cited reason is that it’s unsightly.
It most often is but how does this look? 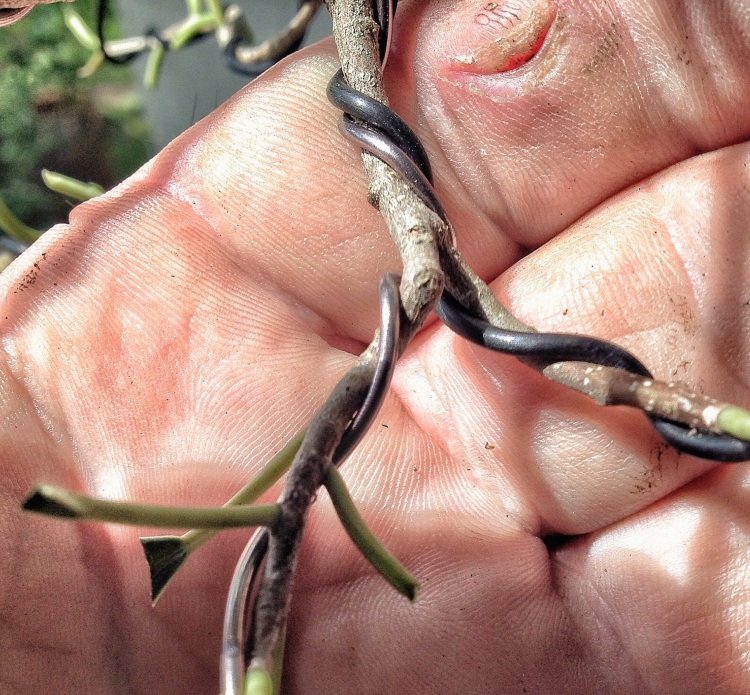 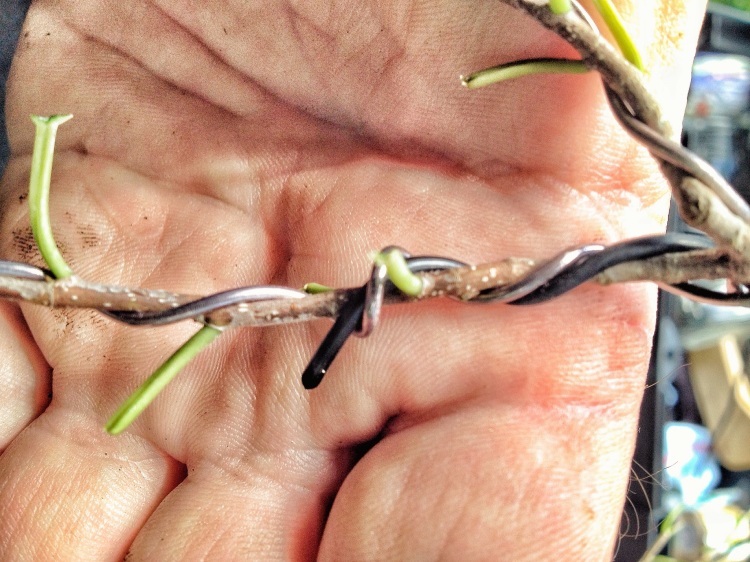 This helps anchor the smaller wire and the bigger wire.
Wanna see the tree?
Ok, but ignore the amputated branch.

It’s a glaring absence, kinda like when Denise Cosby disappeared from the TV show A Different World (there’s a reference both the youngsters and old timers will have to google).
This might help. 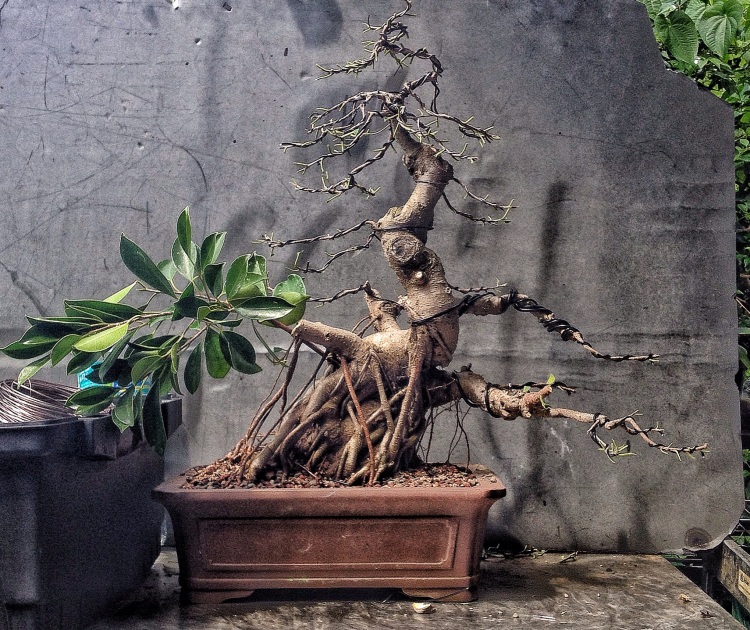 That’s kinda weird, like when Ted Danson stopped dyeing his hair.
What about this? 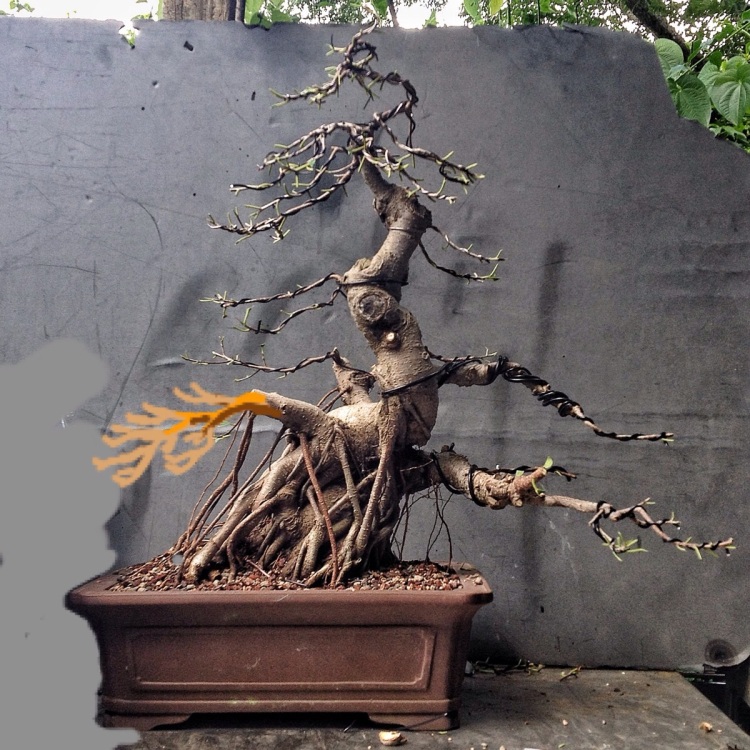 That’s a bit like the first Lord of the Rings movie way back in the 70’s with the weird rotoscoped animation over film.
This is even worse.

I think it ultimately will be shorter than it is now. The apex is always changing on a ficus. And maybe removing the first branch on the right….hmmm, maybe.
Now, I have some work to do on my own tree.

A repot, some trimming and defoliation and two wires.
Ready? 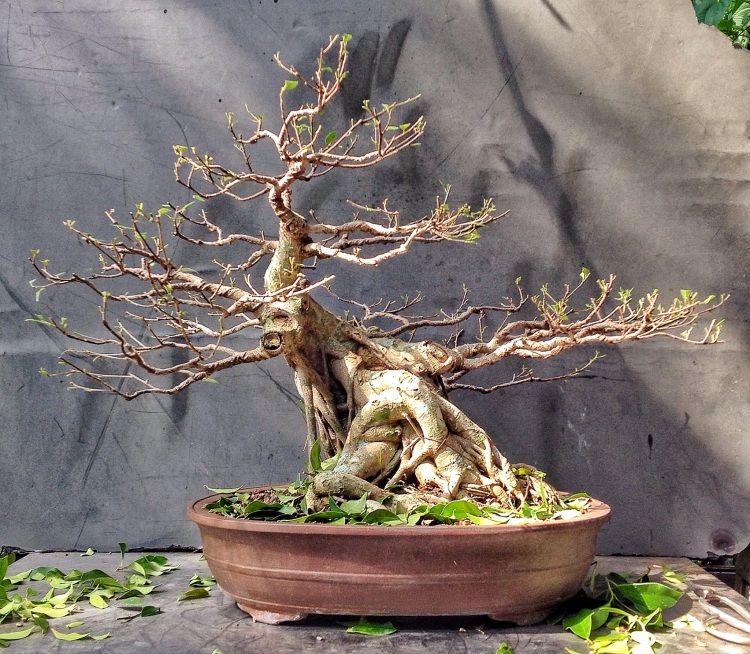 Here’s an interesting thing I found in the soil:

Can you see the mycorrhizae?
Cool, must be the pine bark. When you see this beneficial soil fungus make sure you sprinkle it in the new soil. It is a symbiotic organism that helps the plant take up nutrients and water and the plant reciprocates by providing sugar.
The big reveal!

It’s been about two years getting this tree to this point (the last post on this tree was here about a year and a month ago). It’s really getting ramified.
In Nick’s case, he should be able to get his tree to this point in less time; he has the advantage of an apex where I had to build mine (go read that post).
I’ll make sure to get update pics from Nick for you.
They’ll probably have sad clowns in the background, you know how weird photographers are.