I need to get my tools in shape for my Louisiana tour.
It’s always a battle with rust on carbon steel tools (the “black” bonsai tools you see for sale).
Now don’t get me wrong, you still need to clean and oil your stainless steel tools too.

For one thing, if you have carbon steel that’s making contact with stainless, the rust from the carbon will transfer over to the stainless. I think it has to do with negative and positive charges.
And often the sap from whatever you worked on last is acidic and could etch the metal.
On to it then.
Unfortunately for you all, this won’t be a sharpening tutorial but just a cleaning and oiling lesson.
Sharpening is a full post in itself.
First, I use a plastic bristled brush (like a toothbrush) to remove all the dirt and dust etc.
Then I break out the synthetic steel wool.

Synthetic steel wool has the abrasiveness of regular steel wool (which is very little) but it won’t rust. It’s like one of those green scotchbrite pads, but better.
For the really dirty areas, I use a sanding block that has abrasive material throughout the whole body of the block. Which means that, as you use it, the abrasiveness doesn’t wear out.

On the stainless tools only, and with dried ficus juice especially, I’ll use Magic Erasers. It’s like magic.
After cleaning, I’ll usually sharpen, but you don’t get to see that part yet, so now it’s oil.
I’ve researched the question of oil quite a bit.
What most bonsai people recommend (and sell) is this magical sounding stuff called “camellia oil”.
This is what I use.

What is camellia oil? It is an organic oil pressed from the camellia plant (the same plant we get tea from) and the reason it’s used is its ultra-fine viscosity and (because of the viscosity) its ability to bond with steel molecules and prevent rust.
It is also the traditional oil used for samurai swords.
As such, you would guess correctly that it is pricey (unless you buy it by the gallon).
Here’s the rub. You know the stuff I use? Because camellia oil is plant based, it has a tendency to spoil, to turn rancid and smelly, as it were. Modern day camellia oil is a mixture of the highly refined 3-in-1 oil and camellia oil, just enough to call it camellia oil and still keep it from spoiling.
They mix it, you see, because 3-in-1 oil is also ideal for bonding with steel.
Just like camellia oil.

Done with the tools.
The last bit of maintenance is on my tool roll.

I made it (with my wife’s help) out of canvas.
I prefer canvas to vinyl or leather because I can spray oil on it and not ruin it…..too much. 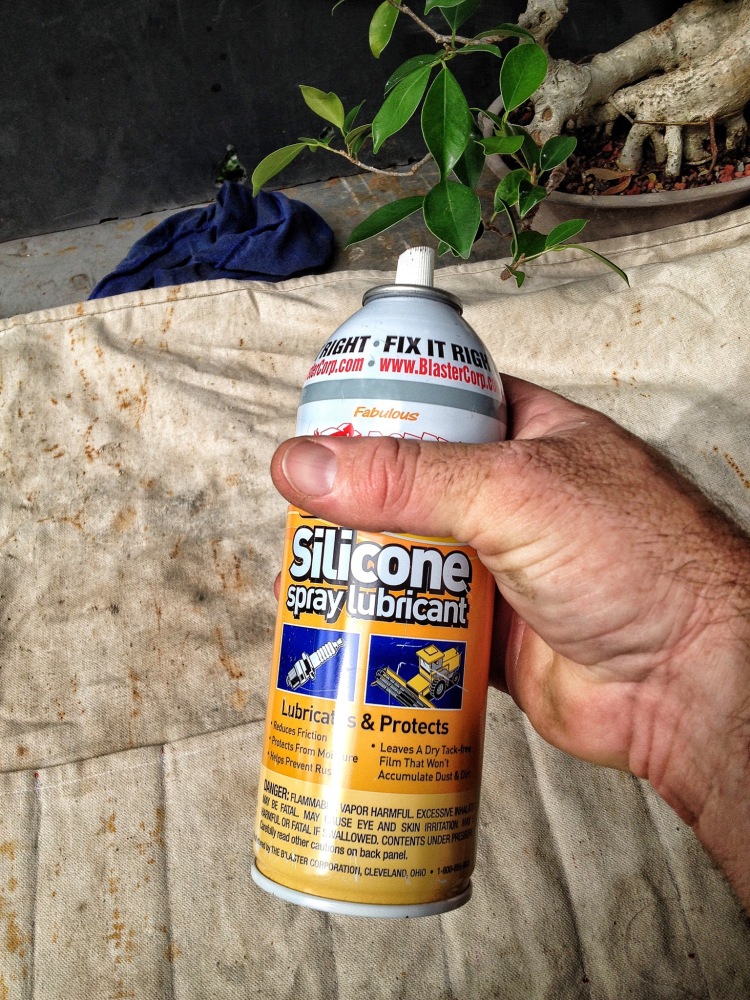 The reason I spray oil on my tool roll is to keep water out.
It’s kinda an old timey way of protecting tools, but I like it.
With my tools cleaned and all slippery….

….I’m going to turn my attention to a Florida privet I’m carrying along as a visual aid for my stop at The Lake Charles club.

I’ve already applied lime sulphur to the carved portion and done a topiary trim.
Now I’m looking at it and just not liking what I see.
The reason I’m taking the tree on the Louisiana Tour is for the Lake Charles club to see what carving can do in making a somewhat average tree look a little better.
At the moment though, it still looks rather average.
There’s something that’s just not right.
Maybe I need to clean it out more?

No….still something not right
This is a good example of using the camera to spot flaws.
Can you see what I see?
How about now? 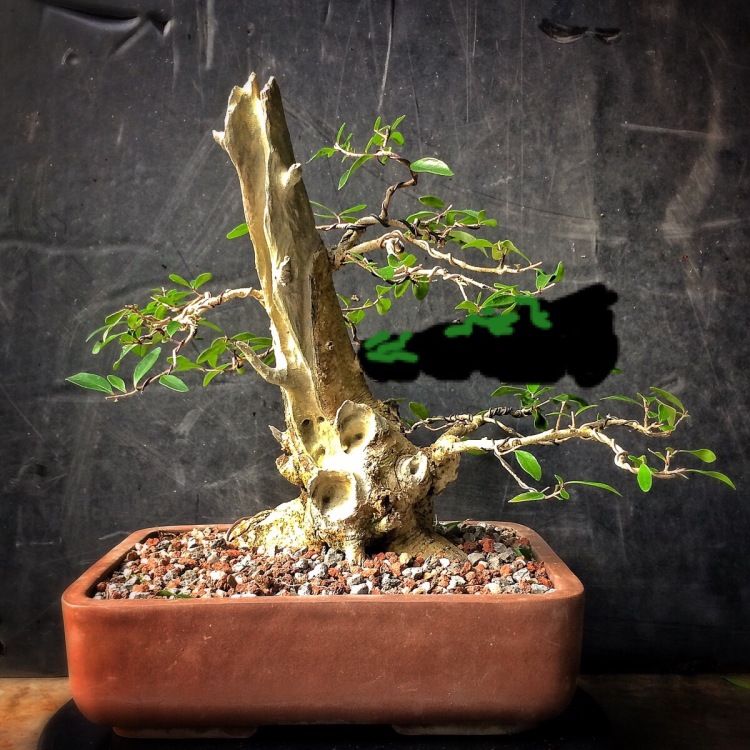 Of course you can’t see it now, I doodled it out.
This branch, which has been my nemesis the whole time I’ve been styling the tree, has to go.

A little tweak of the branching and….

Damn Florida sun, you can’t see it very well right now, let’s hope that the sun goes behind a cloud.
In the meantime, the light is good for some dramatic shots.
Imagine you are a hawk and you’re just about to land on the dead treetop.

Now that I think of it, the way we look at these trees if just the way a bird would see one. 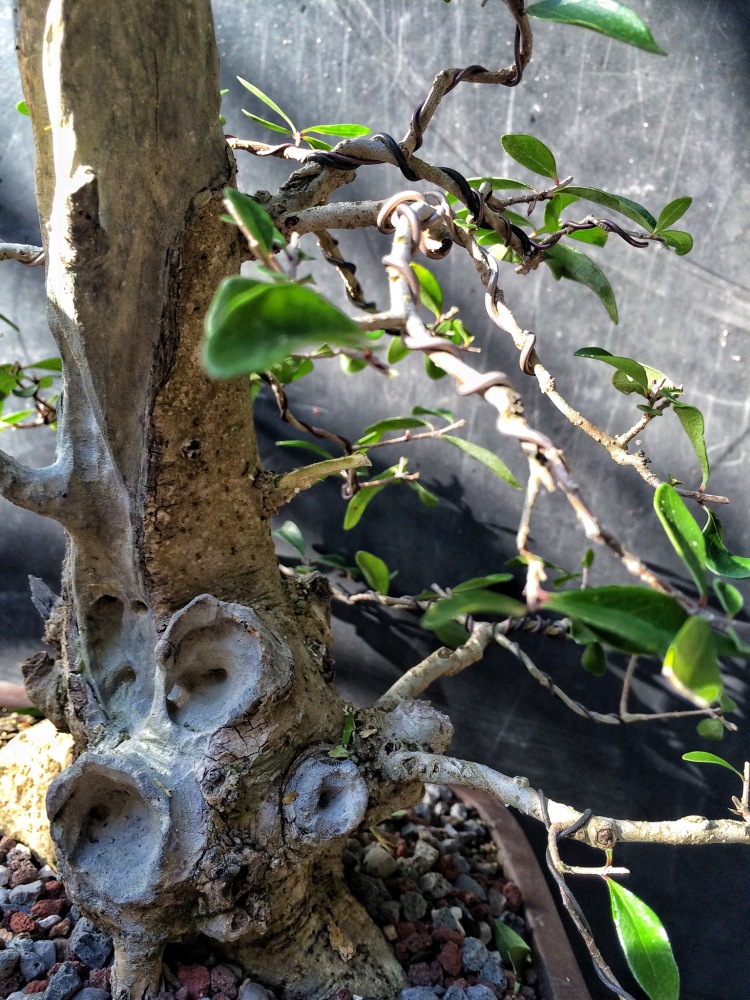 Or Superman.
Ah, the sun is behind a cloud!
Take the pic quick.

Now I’m ready to for my trip, except the hundred other things I have to get ready.
It’s Thursday night and I’m leaving at 6 am Friday morning; it’s not a bad journey, only 650 miles or so to my first stop, New Orleans . Yup, at this time tomorrow, I’ll be giving a demo for the New Orleans Bonsai Society.