This post has the possibility to be either profound or profane.
And the day begins: I woke up with a slight headache.
It was almost like a hangover. I probably should have gone out on the town and had a good time and therefore had a real hangover and then the migraine that my small headache exploded into later would have been a badge instead of just a burden.
This was the sky I was greeted with outside.

It’s a good thing that the camera doesn’t show the mood of the photographer, otherwise the pic would have been all greys and browns.
Coffee, eggs, bacon. Need.
And about 800 mgs of ibuprofen.
Gerald took me to Ihop for breakfast, it was good and I was starting to feel better.
Time to go to work.

Here are the trees, all purchased from Wigert’s s Bonsai and hand picked by moi (Erik gives a good discount to clubs ordering workshop quantities, and I pick out good trees, mostly…)
The first two are the most balanced with abundant branches and good nebari.

This one offered some challenges but was more dynamic than most of the others. 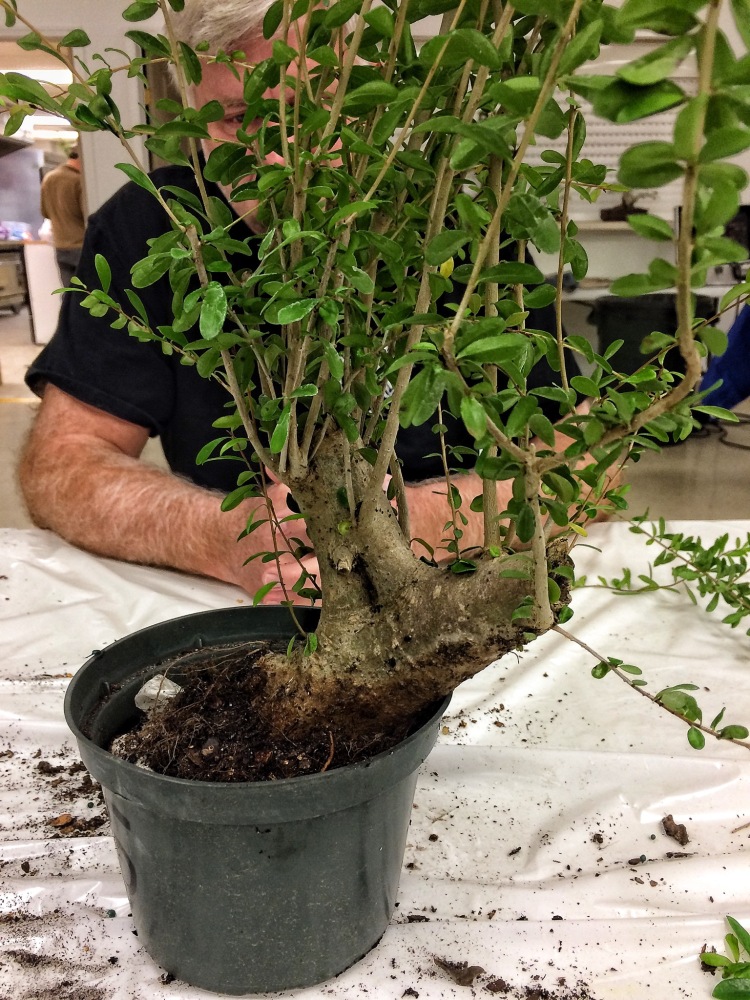 A beautiful short one with a nice bend.

This is another one that had dynamic movement.

The most difficult one.

This next one had the best natural deadwood.

And another dynamic one.

This last one was not a collected neea but a nursery grown one that originally came from Jupiter Bonsai. 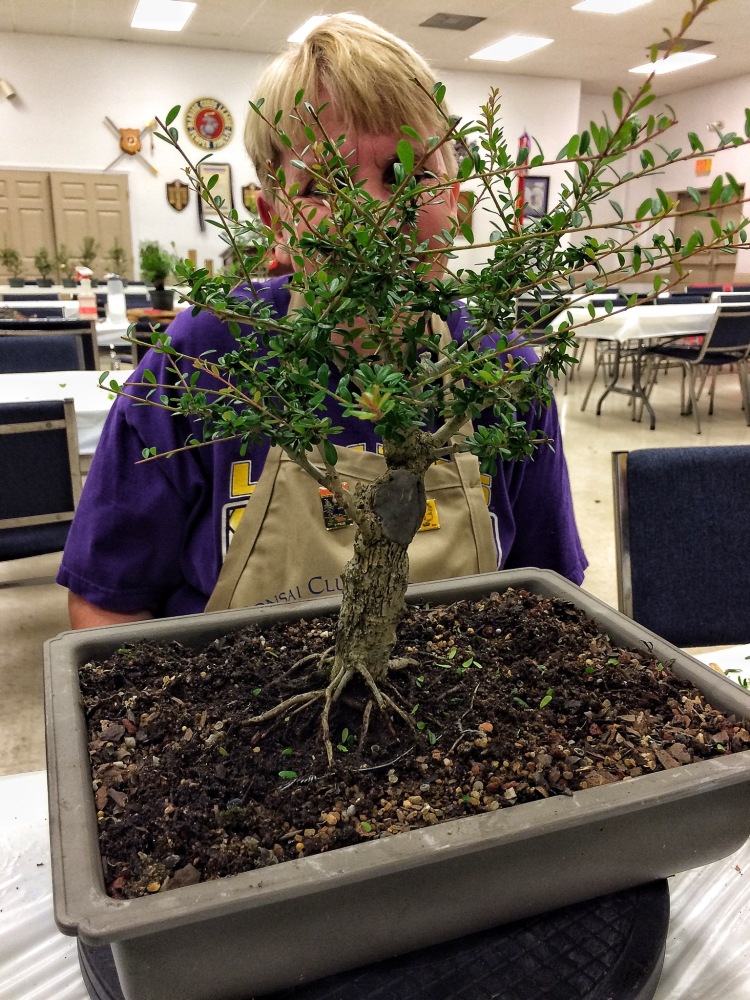 The way I run a workshop is to first have the students try to find the front of the tree.
Then I visit each person and we have a debate. If they are beginners, I’ll explain how we arrive at the front (the widest base or nebari) or, barring that, what the back is.
If they have experience, it’s more of a give and take than a lecture.
Often a tree might have two fronts based on the nebari and then the talk is of branch structure, taper, deadwood etc.
Unfortunately for y’all, I didn’t document, in pictorial form, everything we did to the trees.
That said, here are the after pics of 8 of them. 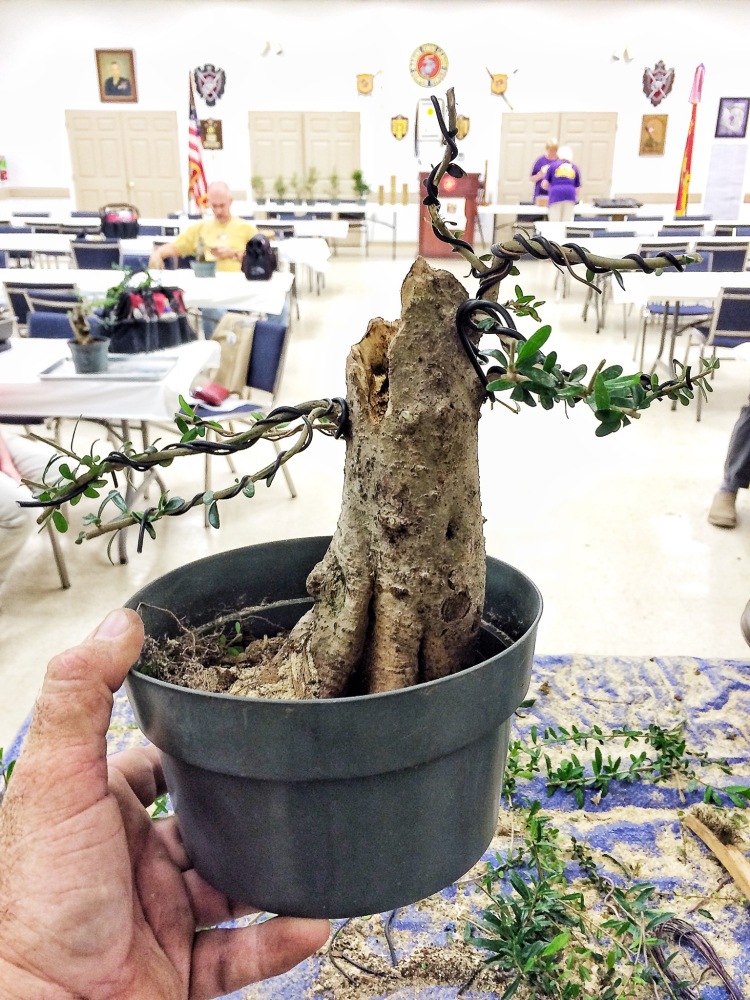 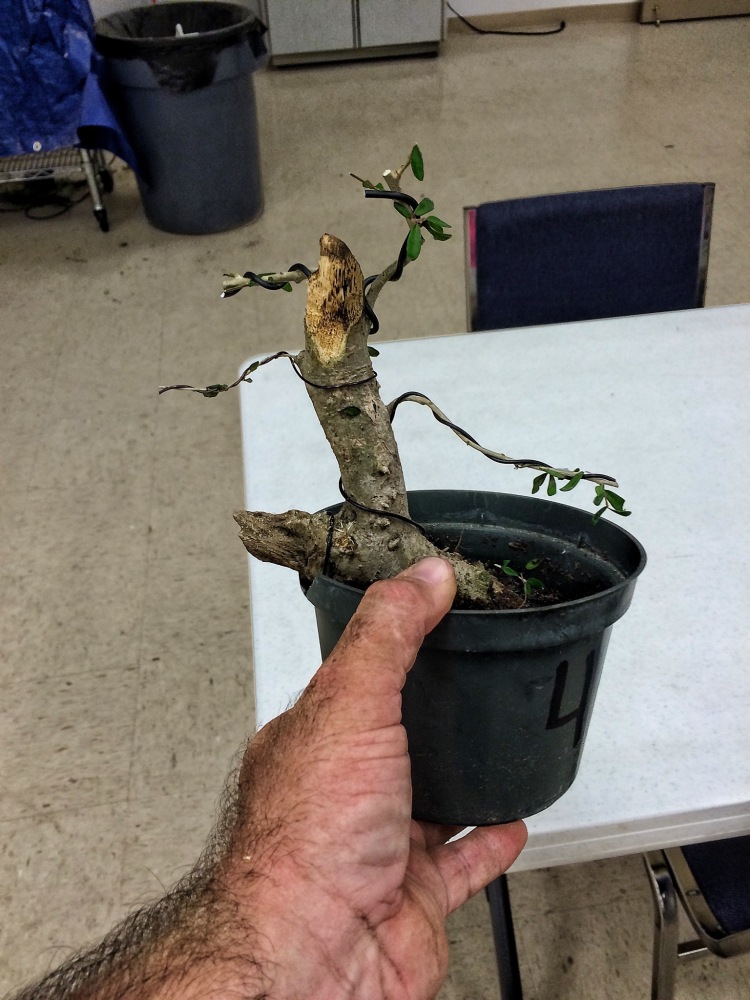 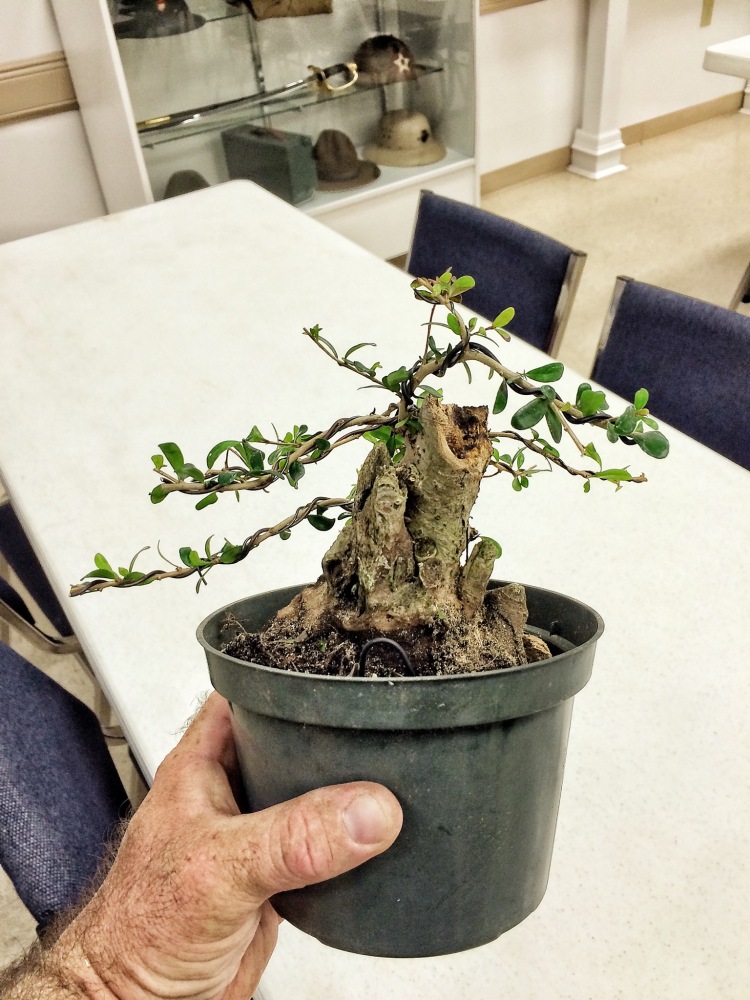 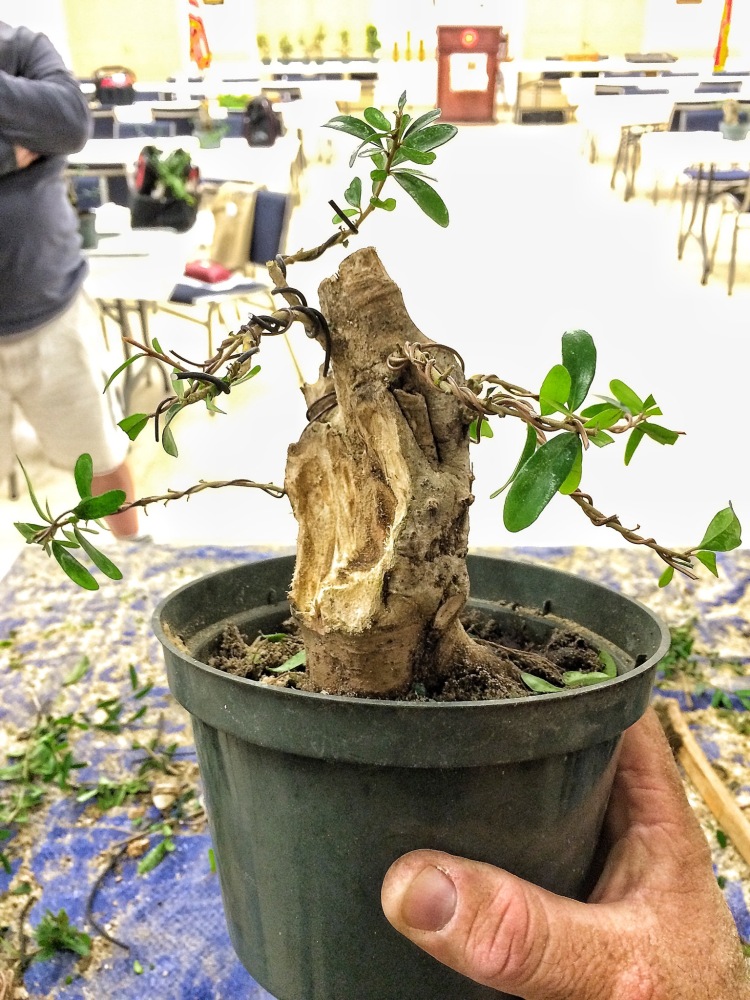 I didn’t get an after pic of the nursery grown neea. It was a wiring job turning it into a nice deciduous tree style.
The one tree I should have gotten an after pic of was this one. 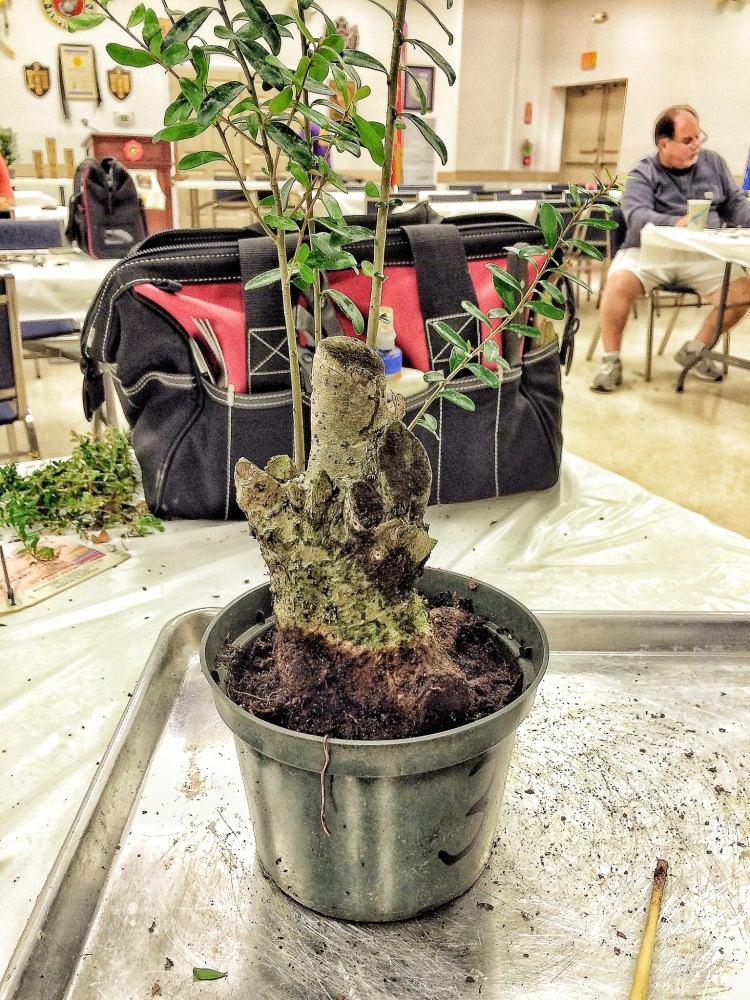 As you see, there was only growth coming out of the back of it.
Maybe I can get a pic from the guys in the New Orleans club to show you my solution? If I can, I’ll post it at the end.
The reason I didn’t get a pic was at this point, after all the carving and all the smoke and dust that entails, my head was about to explode. I’ve been getting migraines since as long as I can remember. I should get a doctor to prescribe a specific migraine medicine, but I’m stupid and stubborn sometimes.
Ah, but if I weren’t, you wouldn’t like this blog so much now, would you?
Onward to the the latest mercantile pursuit of mon frére en arte, the prodigious Guy Guidry and his new storefront, NOLA BONSAI. It’s in the Garden District of New Orleans on Jackson ave. near St Charles

Here’s Guy on the right and Jim on the left.
Can you guess what’s in the background?

That metal framework coming to a point?
Believe it or not, that is the original top to the Eiffel Tower.
No, really…back in 1981 it was decided to remove the top (which held a restaurant) because it was weighing down the structure too much.
A chef decided to buy it and ship it to New Orleans so he could open his own restaurant. It, as many restaurants do, didn’t last, and the structure has been many things.
Now, it is owned by an organization that’s called the Eiffel Society and the building is a rental space (you could be be married, baptized, or eulogized there I guess).
Talk about a neighbor with a history. How would you like to see that everyday?
How about these trees?
Trident maple, big boy.

I couldn’t get a good pic of the foliage pads on this juniper but here’s the deadwood and trunk.

Let’s take a walk inside, shall we?
He has a sunroom filled with trees as you first walk in. 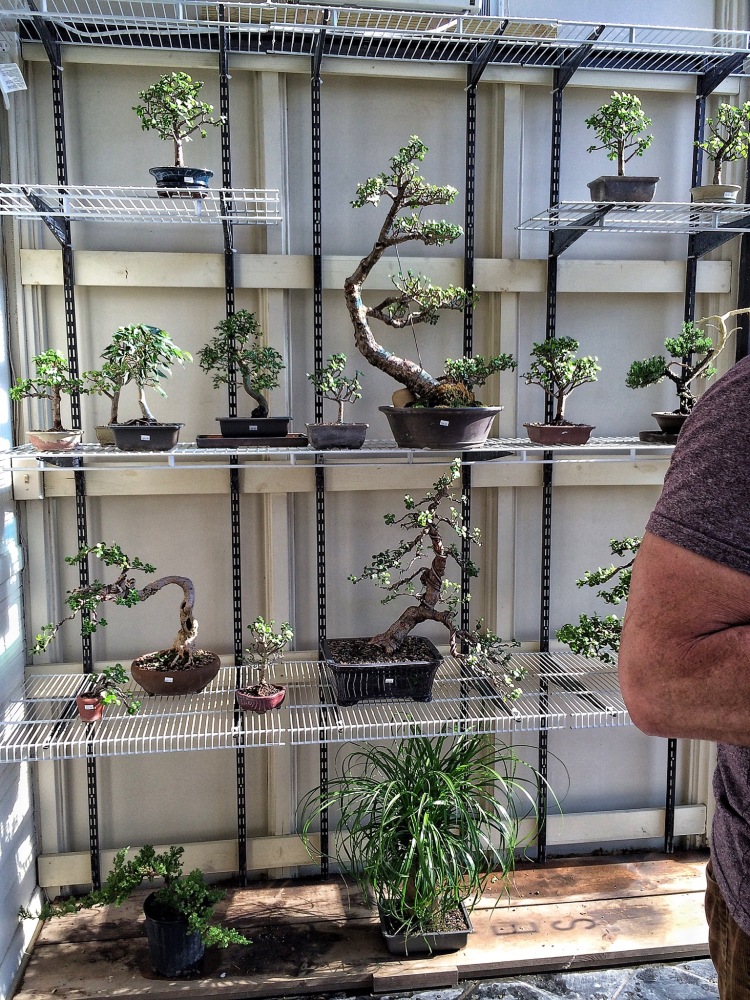 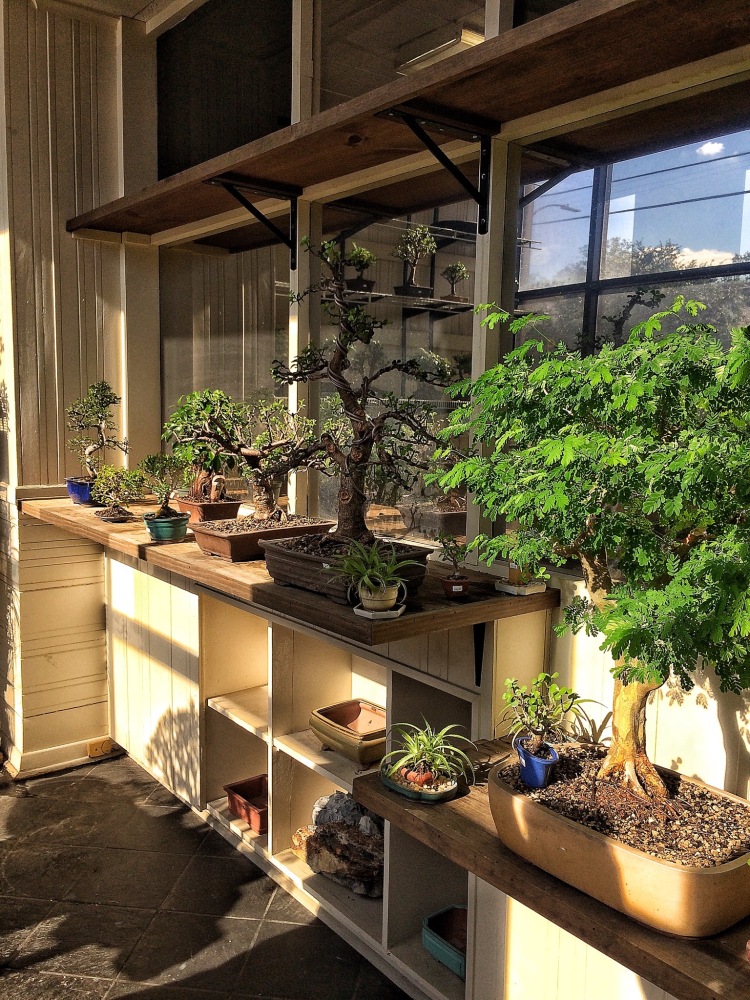 And a perfect classroom space beyond that.

He’s using the same strategy on beginners that I am: dwarf jade. 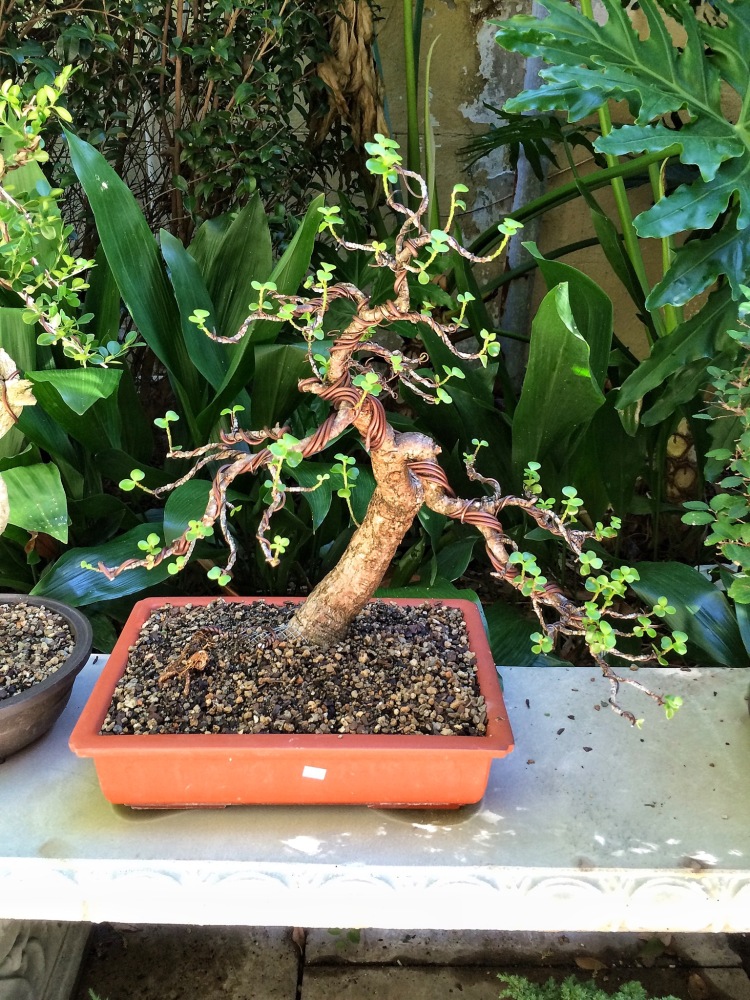 It’s a tree that’s easy to take care of but it can be refined into a beautiful bonsai in time.
He had all sizes, shapes and price ranges.
After some catching up and bullshitting, and letting him take care of a future bonsai artist (a boy of about 9) We bid adieu to Jim and I then took my life into my hands in a mad dash across New Orleans and over the longest bridge in the world trying to follow Guy to his new home in Covington. My head began to pound.
Originally, I had planned on traveling to Lake Charles that night, but Guy invited me to a party at his new fiancé’s parents house. The father happens to be a judge.
And Guy also promised me a taste of a dish that he is a master of:
Redfish Couvillion.
I could not refuse.
Oh, and you did read that right, I said “new home”.
Here’s where I have some sad news. Due to a divorce and having to split up the property and the trees, Guy’s nursery “Northshore Bonsai” is shutting down. The property has been sold and the trees are up for sale.
Just damn.
But Guy is an optimist and isn’t taking it too hard. He’ll bounce back.
And his new girl has a real calming influence on Guy.
After that harrowing trip, it is needless to say that I had to check my drawers….I mean, use the lavatory, upon arrival at the new homestead.

I love Louisiana! Look at that heating device (I think). I can only imagine, on a frosty, Cajun, January morning, the blue flame licking from those ceramic elements above my head as I complete my morning constitutional.
Yes, it was on the wall above and behind the toilet.
Talk about a hot shit.
With my business done, it was time for a few libations to try to ease my poor tortured head.
We had a few minutes before we had to leave for the party so I took some more ibuprofen and studied this juniper.

I think I lost myself enough in its curves that, at this point, my migraine finally went away.
Here’s a YouTube clip to really show you the complexity of the deadwood.
Amazing for such a small tree.
Then it was off to the Judge’s party.
It was a night of firsts.
The Redfish Couvillion (of which I can honestly say was the best I’ve ever tried).

I had a just-about-extinct mixed drink called The Roffingac.
It was….different. I’ll let you do some research on your own about it.
I had headcheese and artichoke leaves. A strange combo, I know.
It was a good party, different than I was used to.
Then it was back to Guy’s place for the after party.
I got my guitar out and played some blues while we talked and talked.
About family and bonsai and life. 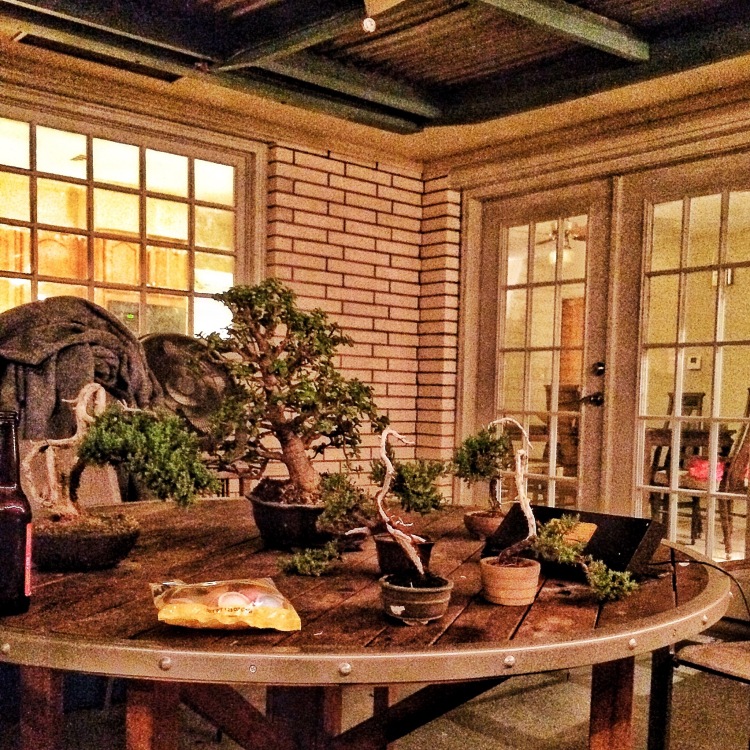 I had to crawl myself into bed around am. The after party continued on without me.
I had to be on the road by 9 and in Lake Charles (30 miles from Texas!) by noon.
I said goodbye to Guy and his new Gal and I left Covington at 8:30.
I am, after all, a professional.
In the next post you’ll see if I totally botched my BYOT workshop with the Lake Charles Bonsai Society or not.