I’m outside and working on trees again.
Well, one small tree, to begin with.
It’s a willow leaf ficus (ficus salicaria or nerifolia, salicaria etc..) I’ve had for about ten years or so. When I got it it had maybe half the girth it does now.
I need to remove the wire and do some trimming. 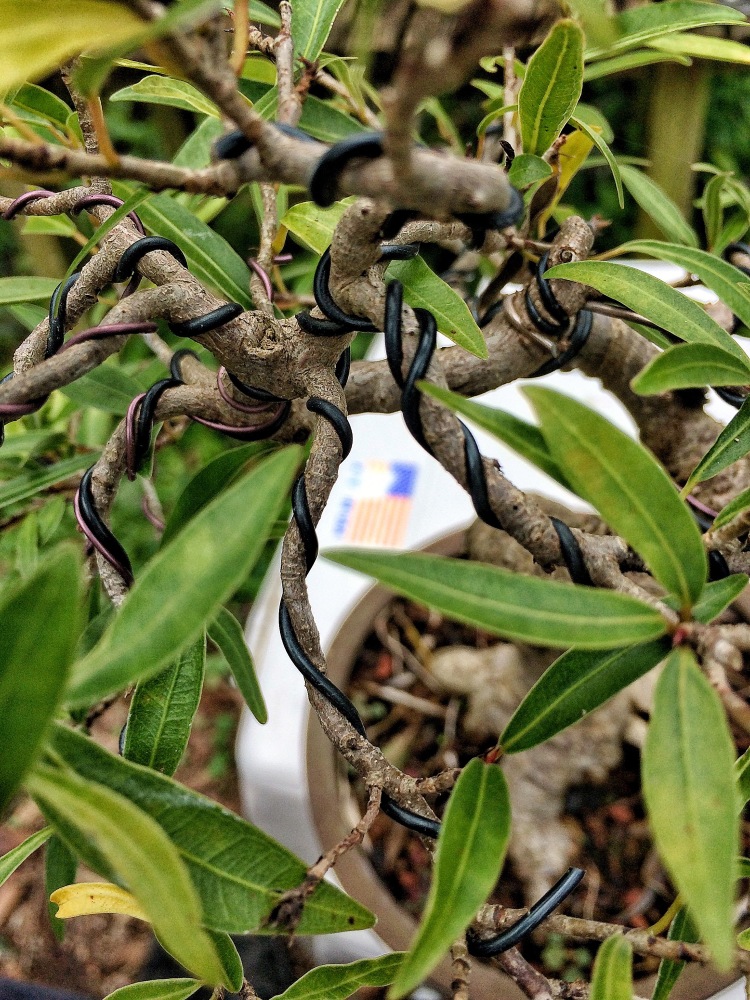 Now, except for one root, I like the nebari. It’s natural looking with roots radiating the full 360 degrees around the trunk. They’re not artificially uniform either.
Now (here’s where I might get in trouble) this is a pic by my friend, Mark Fields, an excellent bonsai artist and teacher who is in Japan as we speak.

It seems that this “look” is becoming fashionable, kinda like how high waisted shorts on women are coming into style.
Here’s a close up.

It doesn’t look very natural to me. In fact, it looks like poured concrete or melted plastic. The purpose of the nebari is to make the tree appear to be grabbing or clutching strongly into the earth. To give the tree stability.
This melted look, to me, makes the tree appear to be made of clay and someone splattered it onto the ground. It’s the opposite of strength and stability. It looks like it could fall over at any moment.
In fact, if this were a real tree in the ground and a tree surgeon (they call them arborists nowadays) were to look at it they’d say that the tree was unhealthy and in danger of falling over because the soil it is growing in is too shallow and the roots don’t go deep enough. Dare I say it but, an exaggerated and even grotesque looking root system like this one is glorifying an example of an unhealthy tree just waiting for a violent enough windstorm to knock it over.
Ok, rant over. I’m a little grumpy from my convalescence. Sorry.
Back to my tree. 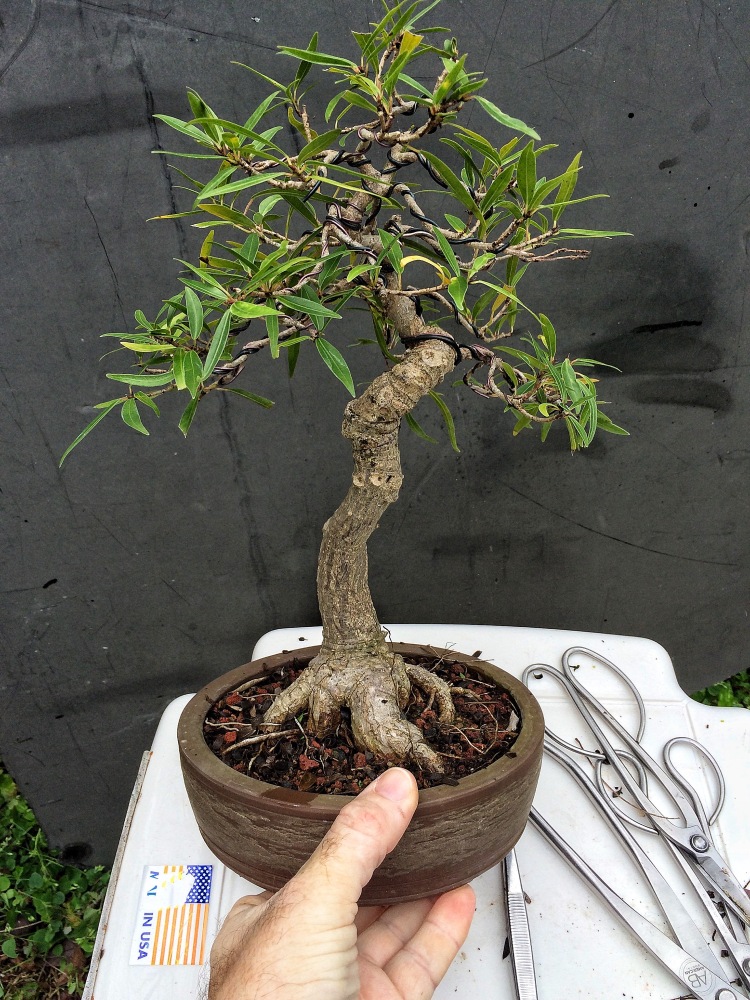 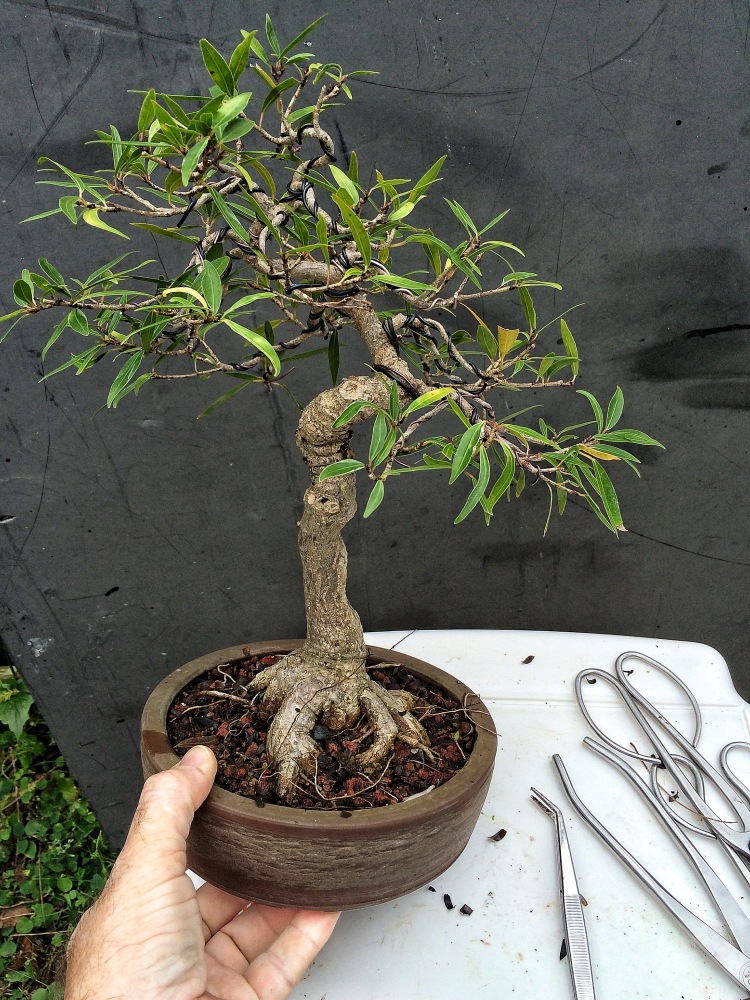 Since this is a bunjin style (or literati as many people call it. Which means that it is a free form, no rules style of tree) and it is in a round pot, the front of the tree is kinda around one of the above views.
First order of business, remove the wire.

I’m sure I puzzled a few people when I made the statement earlier (Perfecto! Just enough) when I noticed that the wire was biting into the branches.
One will hear from many bonsai enthusiasts that it’s a serious breach of bonsai etiquette to allow the wire to bite into your trees. In fact, second to the tree having reverse (inverse, obverse) taper in the trunk line, wire cutting is the second most evil sin one can commit when growing bonsai.
So why am I so excited about these wire marks?
Wiring a tree helps us to position a limb where we want or need it for the artistic design we are trying to achieve.
The mechanism that makes the process of wiring useful is simple: the growth and lignification of a branch over time. The wire holds said branch in place and, when the branch hardens off, the wire comes off.
I work with ficus and ficus limbs tend to not want to stay where you’ve wired them, unless you’ve allowed the wire to cut in (to a small degree).
So, the small bit of wire cutting I’ve allowed should be just enough to ensure that the main branches stay put.
Hopefully.
Let’s see how this branch holds. 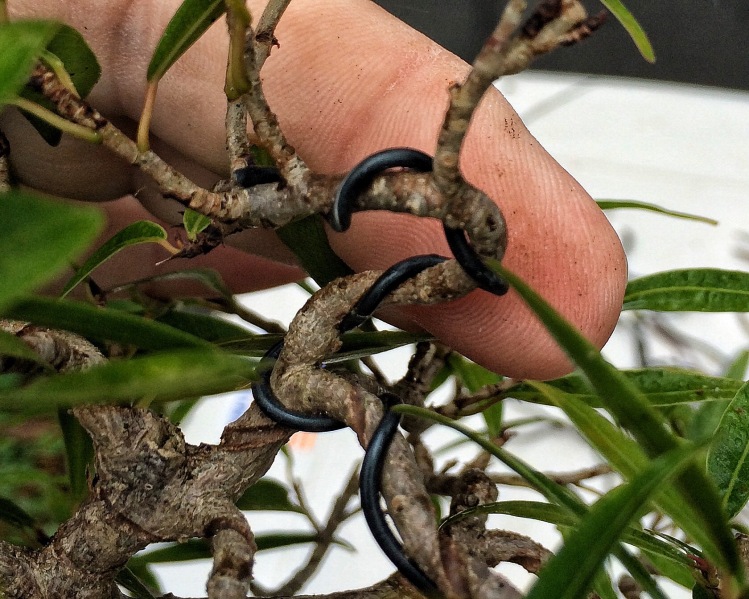 I’ll let you know if it’s still holding a week from next Tuesday.
I need to trim every branch tip on this tree. Now’s not the best time to do it though. It is mid January here in the F. L. A. Which means winter, and tropical trees in winter don’t grow much, unless, one has a greenhouse.
I, thanks to Dave, Paul, Steve, Guaracha, and Mark, do. 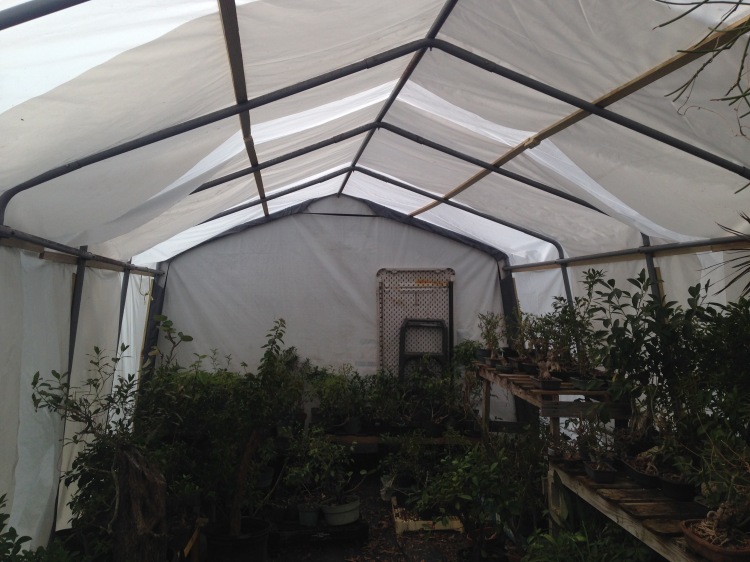 Since the tree has been outside in the couple of cold spells we’ve had, it’s dormant.

I’m going to trim all the tips……damn, it’s starting to rain.
We must move this operation inside. 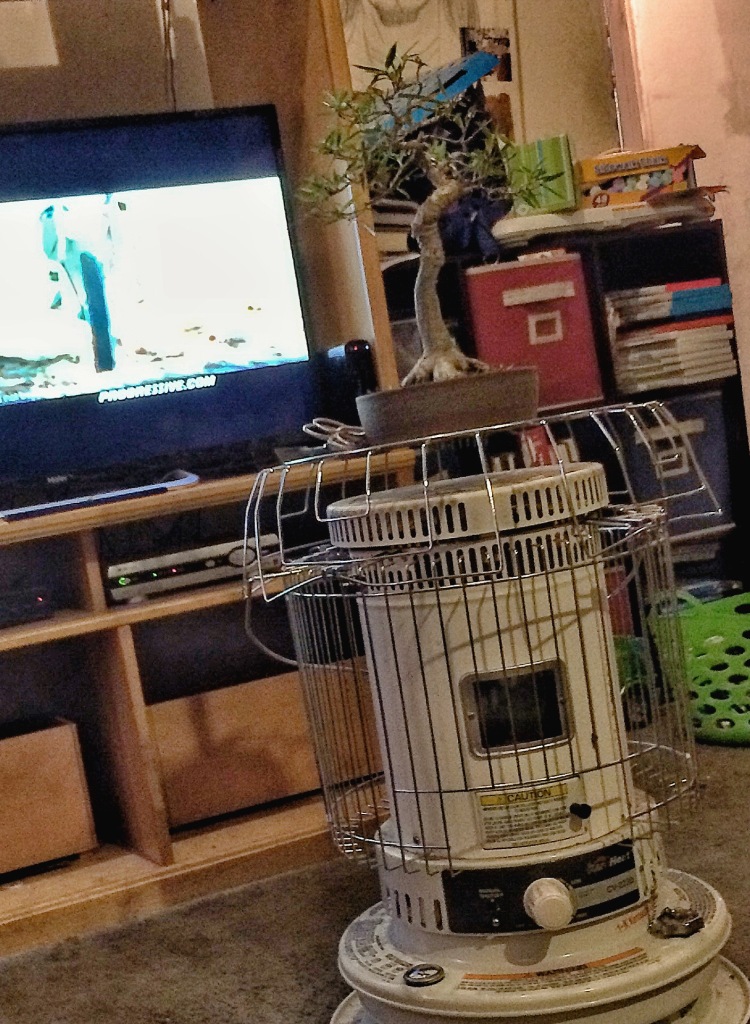 Back to it then, righty-o.

I’m going to make a mess on the carpet.
My wife said to go ahead so…,

Now’s a good time to point out the root I don’t like.

What I’ll do when I repot in the spring is maybe either remove it. 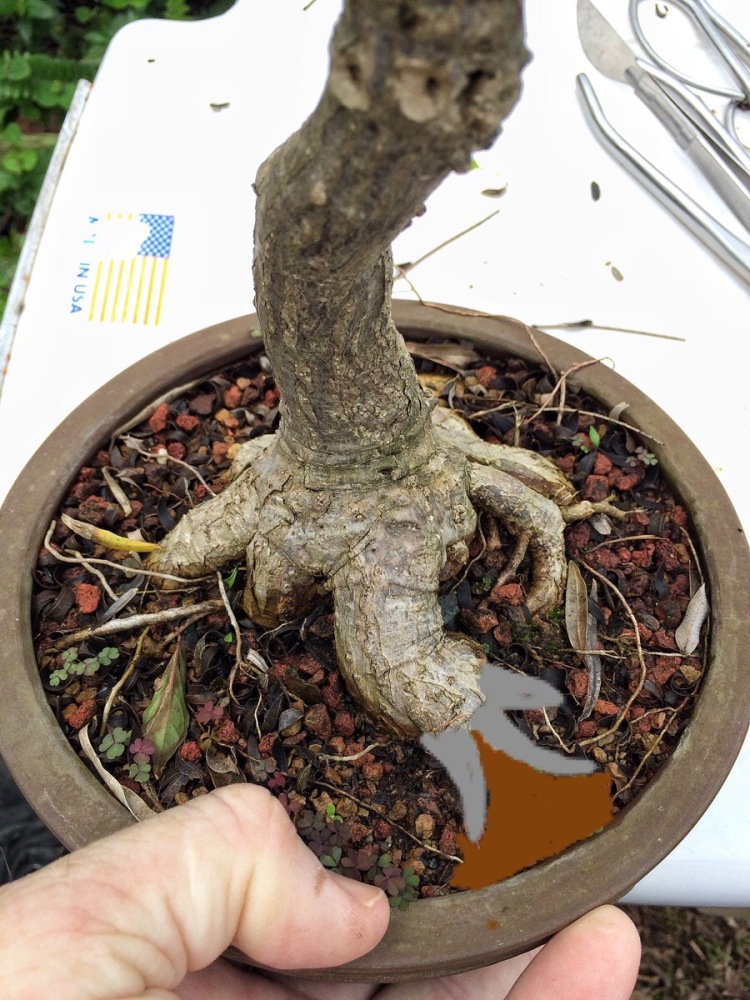 Which is what I’ll probably do.
But that’s several months away.
Here’s the tree all trimmed.

What now? I dump gobs of organic fertilizer on the soil surface, water it in well, and I put it in the greenhouse.
The temp inside is about 10-15 degrees Fahrenheit higher than outside, which should start pushing growth tomorrow rather that in late March, which is what would happen if I left it outside.
And even though it is a bunjin, I prefer this view best.

That’s the last tropical I need to worry about, next post I start the work on my deciduous trees.
A sweet little elm, in fact.
See you soon.