Earlier this year during, I’ll admit, a period of time where lucidity had been suppressed chemically, I defoliated and unwired this ficus.

I can’t tell you exactly when because my sense of time was altered, as I said, with the application of free-flowing opiates I received, first, whilst hospitalized, and then during the subsequent recovery.

I know that I didn’t repot it (or I hope I didn’t, ‘cuz I’m a gunna do it in a minute). The leaves have gotten pretty big since the initial defoliation, which seems contrary to the teaching, but I think I may have fertilized it…..maybe. P’raps I should start writing things down, I am getting old and I kinda have this good chance of developing lesions on the brain in the near future due to B vitamin deficiency.

This is an ungrafted ficus microcarpa, most likely grown from seed, that started life as one of those evil, much despised and maligned, and, so-called, ginseng ficus. 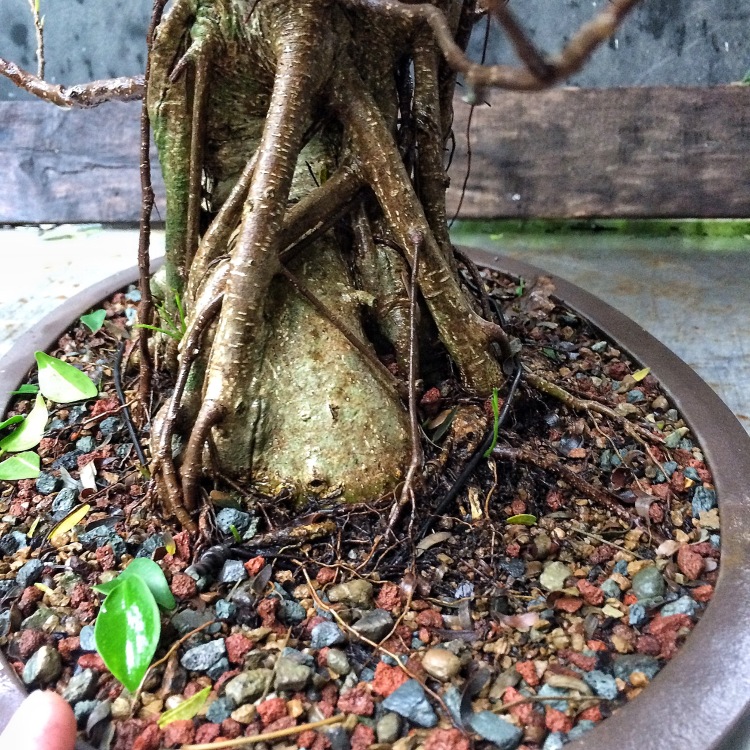 You can see the bulbous nature underneath those aerial roots. I last wrote about this tree in this award winning and controversial, even troublemaking, post here.

I know that these ficus seedlings are ubiquitous and often sold as bonsai but, as a definition, it’s not bonsai unless it looks like a tree. I know, I know, it’s all art, yadda yadda yadda….but a landscape painting tends to have the land and the sky, maybe trees or such. A rock n roll song tends to have a backbeat. A figure drawing tends to have a human (often nude, heehee) in it. So when we say a bonsai, it is more than a plant in a pot: it’s a stylized representation of a tree. And these seedlings tend not to have many of those characteristics of a tree that we are looking for.

It doesn’t mean that they can’t. It just takes a few years of growing. If you do want to buy one and develop it, try to get one with a nice trunk and a good transition into the soil.

The above pic is a drawing of one with potential. Try to get a tree with an even distribution of those ugly tuberous roots around the base.

One way to develop it into the tree-ish look is to plant it deeper, the way it’s supposed to be as a wild tree.

Another way is to chop the roots off like so. 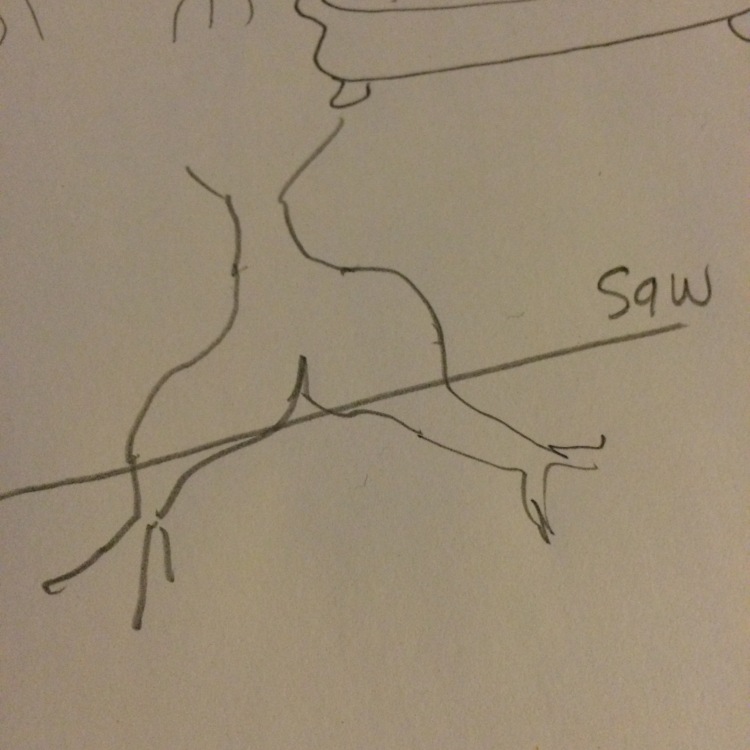 And then, again, plant it deep. This is what you’ll get.

You’ll get better surface roots (nebari) faster but the trunk won’t mature as quick if you cut the roots.

Grafting is a valid bonsai technique,  but not in this way on a ficus. Now, on a pine they’ll graft Japanese while pine (pinus parviflora) onto Japanese black pine (pinus thunbergiana) root stock because the roots on the Jbp are stronger and convey that toughness to the jwp. On the ficus, the f. microcarpa grows faster and has a whiter, smoother bark than most other leaf varieties they use for grafting, therefore, a trunk/root graft just doesn’t look right. So, just chop off the grafted branches on top, and grow the original foliage, the tree will be more even looking. If you like the grafted leaves better (and you should have rooted that chopped part), you do the graft after all the primary branching is mature, then you graft onto those mature branches, not onto the trunk. That’s how many of those spectacular Taiwanese ficus are created. Some are totally a result of the easy willingness of ficus to graft: the trunks are made up of two or three smaller trees, the mature branches are grafts, the nebari is all grafted, and then the secondary branching (with the most desirable leaf) is grafted. I’ve seen pics with nails and tacks and grafting tape and plastic baggies all over a tree: looked like Madonna getting ready for a photo shoot.

Here is one tree I’m growing out, I think this is a year from first planting it. 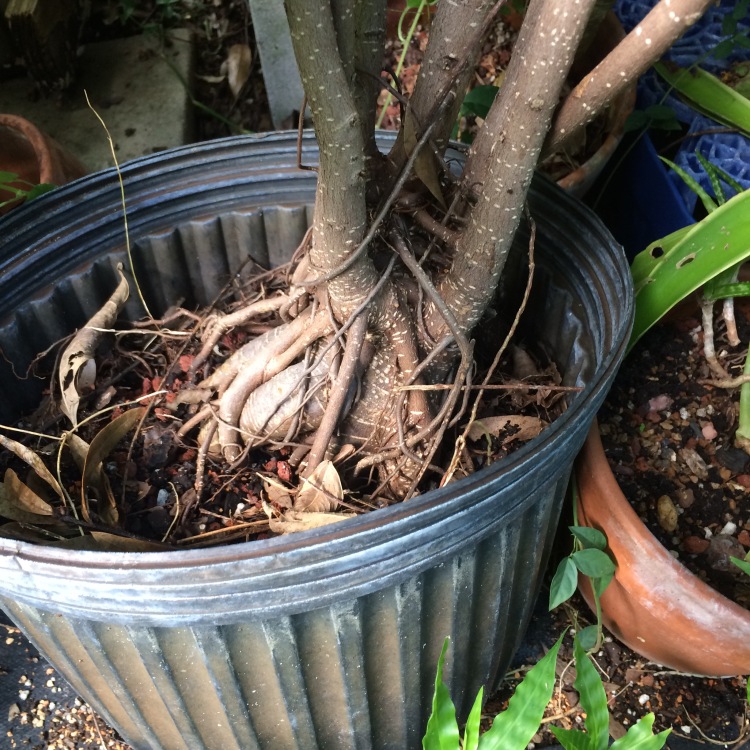 Jealous? Move to Florida. The base is filling in sweetly, I’ll probably give it a few more years like that though. The secret was letting the roots grow out of the drain hole and into the ground.

And here’s one a friend gave me. 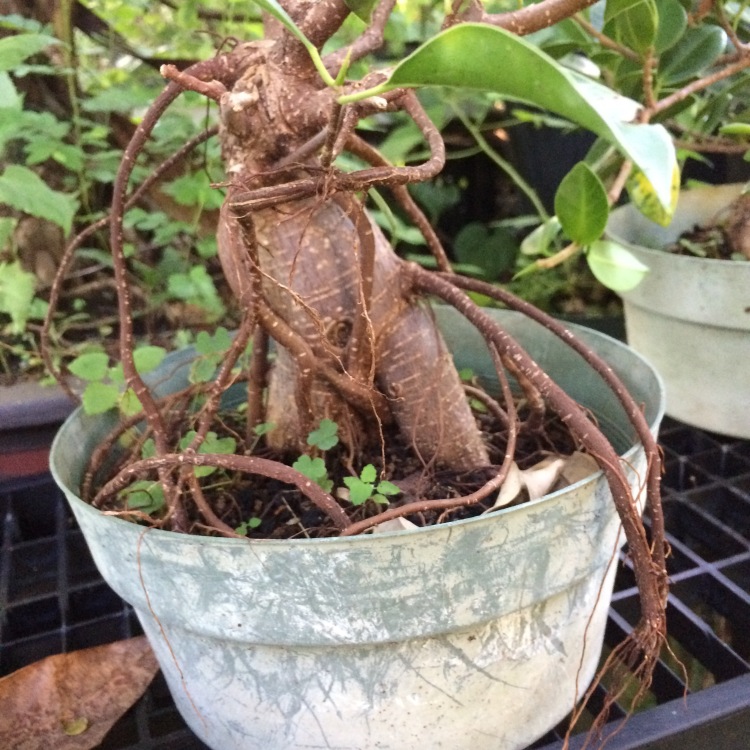 If you can find one with aerial roots that are there already, all you have to do is straighten them out and stick them into the soil.

I put the whe dealie in the next size growing pot to give the roots some room to spread out (8″ pot to 10″).

We will see it next year. Maybe I’ll try some grafting techniques on it.

Anyway, after all that, let’s get back to the main tree. 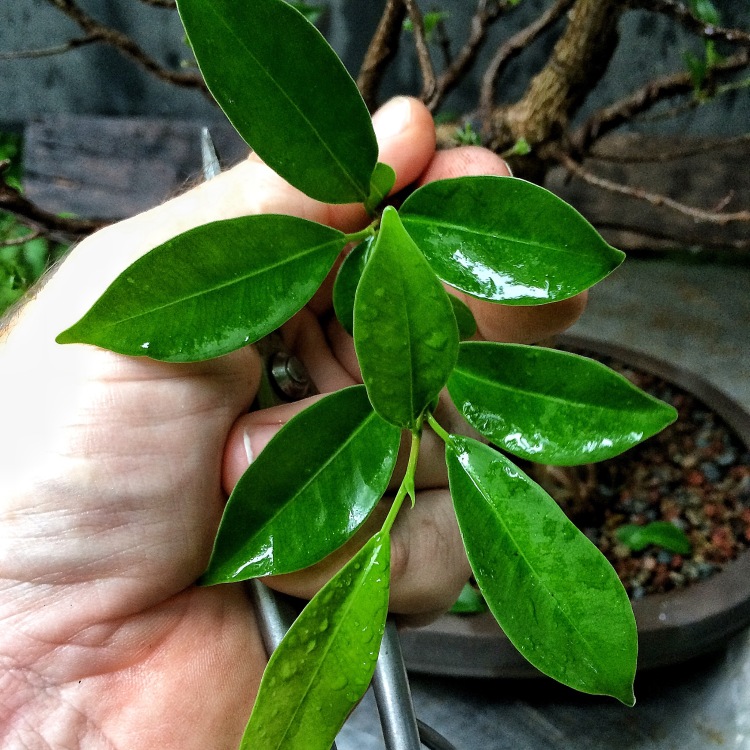 On the agenda: defoliation, minor wiring, if any, and a repot.

Right after this public service message: I get asked this a lot.  “What is this? Is it a fungus? A bug?”

When you look closer, you will see closed up leaves as well.

Almost like a cocoon. It is a nasty bug called the Cuban laurel thrip. Cuban laurel being a common name for f. microcarpa. A thrip is an insidious creature that is tough to get rid of. I use a granular, systemic insecticide myself but you can use a spray; either an insecticide or an oil spray. Here’s the bug:

Can you see it? How’s this?

Thats the adult stage. There’s the egg stage, 2 larval stages, 2 pupal stages, and adult. They are fairly resistant to treatment in the pupal stages, as are most insects, so if you are spraying you need to have a regimine and stick to it. That’s why I use a systemic in granular form (meaning that the plant takes it up in its vascular system and, when the bug eats it, it gets a dose of the insecticide) I prefer granular because a spray can kill bugs you don’t want killed. Like bees or ladybugs.

And I trim each tip back to increase ramification. When you do this to your f. microcarpa, just remember that you will have dieback between the nodes.

That’s the space between the two leaf stems.  It’s called an internode.

Try not to hold the branch like that while trimming. That’s where most of those scars came from; I keep my scissors sharp and I drink too much beer.

I’ll either use the brown rectangle for the new pot or, O_o…..I’m excited, the marble slab I carved in this post.

I’m going with the slab because……slab. And I made it myself and it’s what they call an opportunity for a back link. 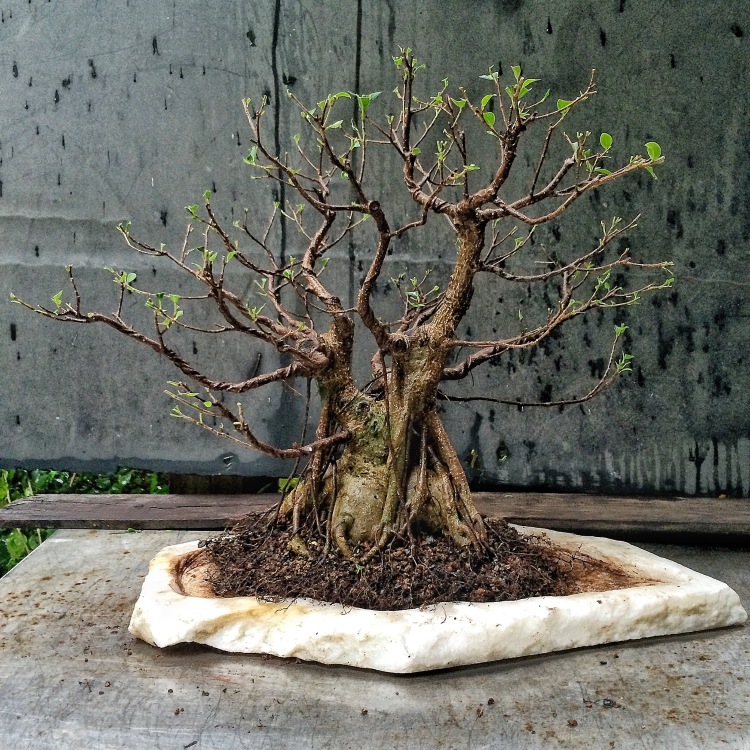 Man that’s shallow, who made this piece of crap. And it’s so white. Like Emminem at the BET video music awards (that’ll get me in trouble).

I definitely need some tie downs. Good thing I made holes for that. I must be a genius.

Some a pickin’ an’ a grinnin’ 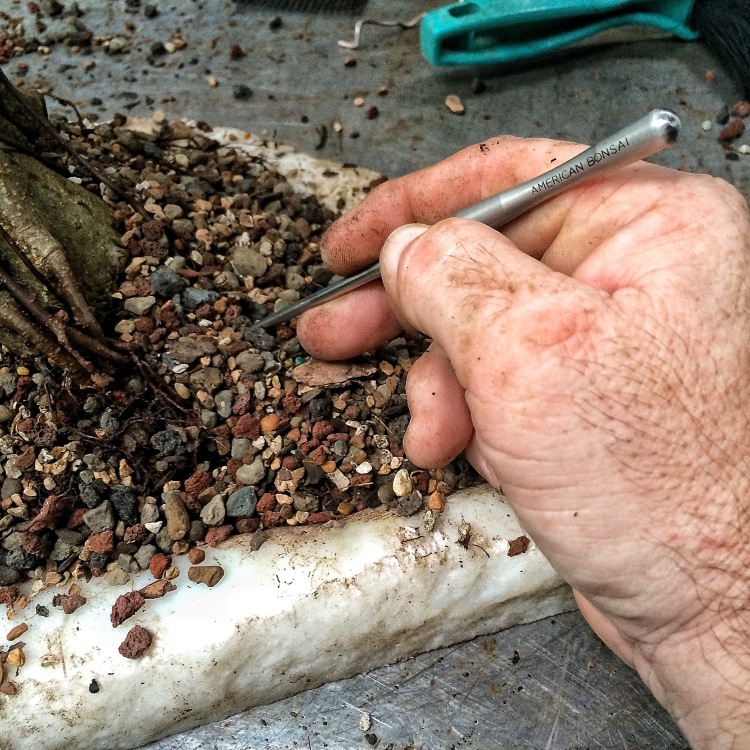 Man, this slab is malformed, who made it, the dumbass.

I’m liking the grime that the stone is acquiring. It’s almost rusty.

How’s it look so far?

Hmmmmmnnnnn? I thinking I don’t need that one branch and I need to wire that other one. And then one more thing.  Well, two more things. I need a caramel to fortify the spirit. 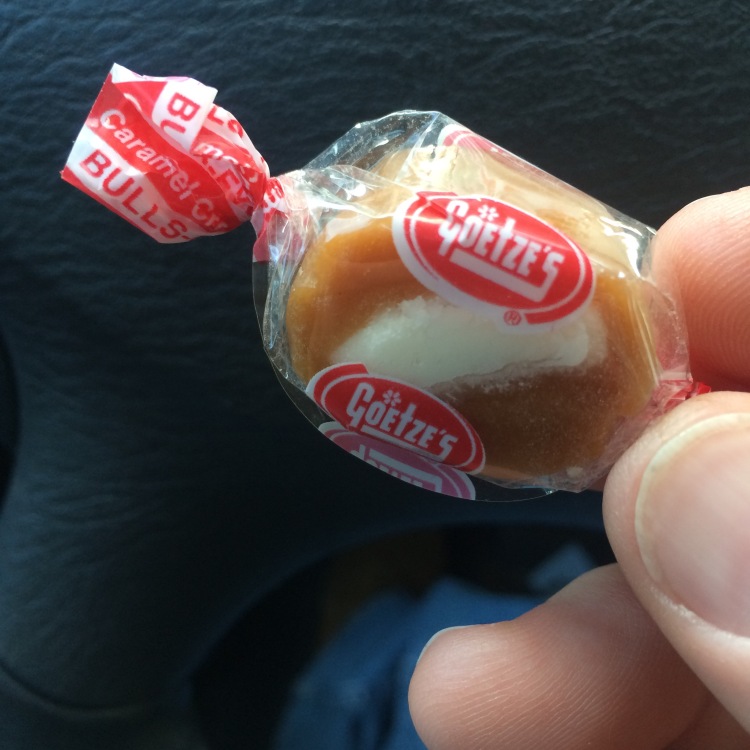 That branch in the back won’t stay put. I’ve let the wire cut in heavily not once but twice.  Damn ficus. 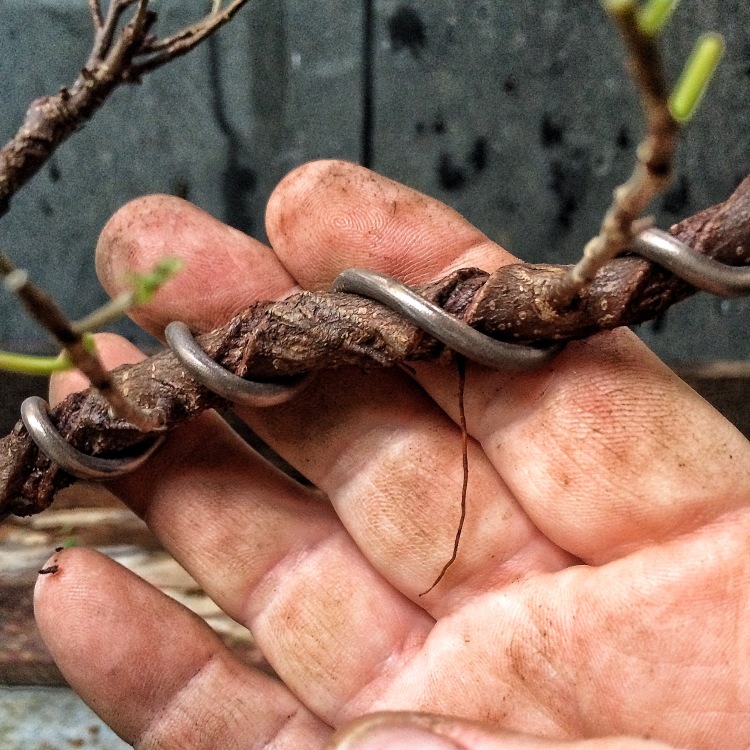 Well, as they say, third time pays for all. Notice that the first wire scar is almost gone, the second was wired across the first, and so the third wire should be in a different space than the first and second. Let me also point out those pleasingly dirty hands. My wife loves it when those filthy, calloused hands run down her naked buttocks. Like it or not baby, I’m baaaaack! (Much to the dismay of a few, I’m sure)

We have moss! I had to steal it off another tree, but the green of the moss against the white of the slab just seems to pays the bills. Everybody loves moss.

I need about one or two years on it, at least, but it’s making me happy right now.