A bucket of podocarpus trimmings. If it could be smoked, I’d move to Colorado and make more money selling it than I’d ever make doing bonsai. Or not. Maybe.  I know of at least  two bonsai professionals just waiting for legalization in their respective states to begin another horticultural enterprise. Let me show you what I’ve been up to lately.

I know, the last one is interesting. Let’s begin with the first one though. Just to be regular and things.

This was my second tree to be exhibited at the Epcot International Flower and Garden festival. It just needs a trim. Well, a hard trim. I need a step stool though, it’s a little tall for me.

I had let the tree go a little to regain some strength from the show. But that was three years ago, so it’s time for The Scissor Discipline.

I’ll let it grow through the winter, trimming the shoots for ramification, and then start really pushing it hard in the spring.

Next, a podo you’ve seen before: click here. Read that post if you  really want to learn about the podocarpus. I’ll just touch on the topic a bit in this post.

The tree has grown out quite a lot, which you’d know if you read the first post about this tree. I was on a good track keeping the leaves reduced, but I lost a month (have you seen where June went? I need to defoliate my trident maples…..)

Here’re the leaves, the big one is the newer one. 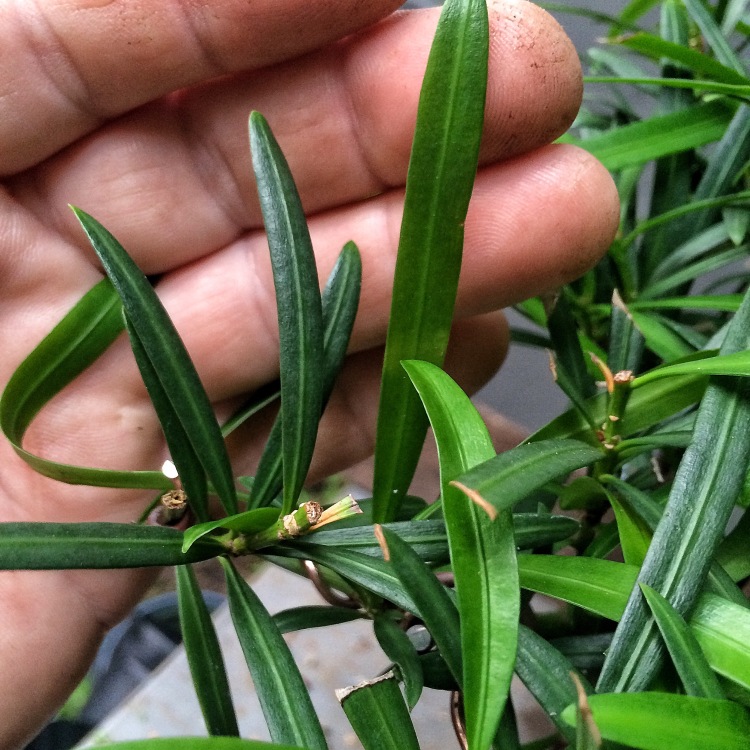 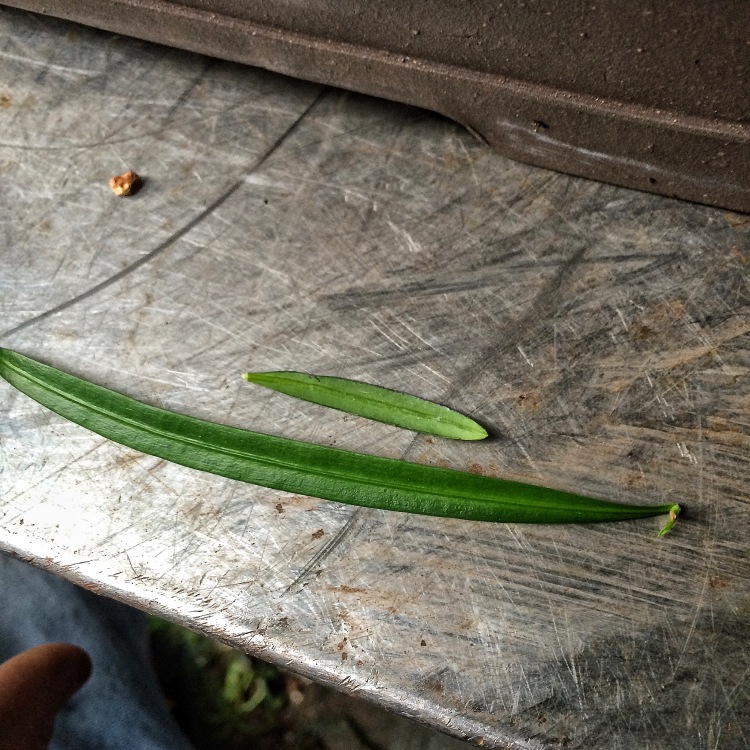 I had really gotten them that small. It’s a real battle though, with each new seasonal growth spurt, the tree wants to push out those big leaves. I’ll show you one technique to reduce the leaf size and increase ramification a little later on in the program.

First, I consider the front of the tree to be like so.

And it might be this warm, old, honey wheat ale speaking but I’m feeling the need to adjust its attitude in the pot.

I’m a little out of season doing this but I’m not really doing a repot. 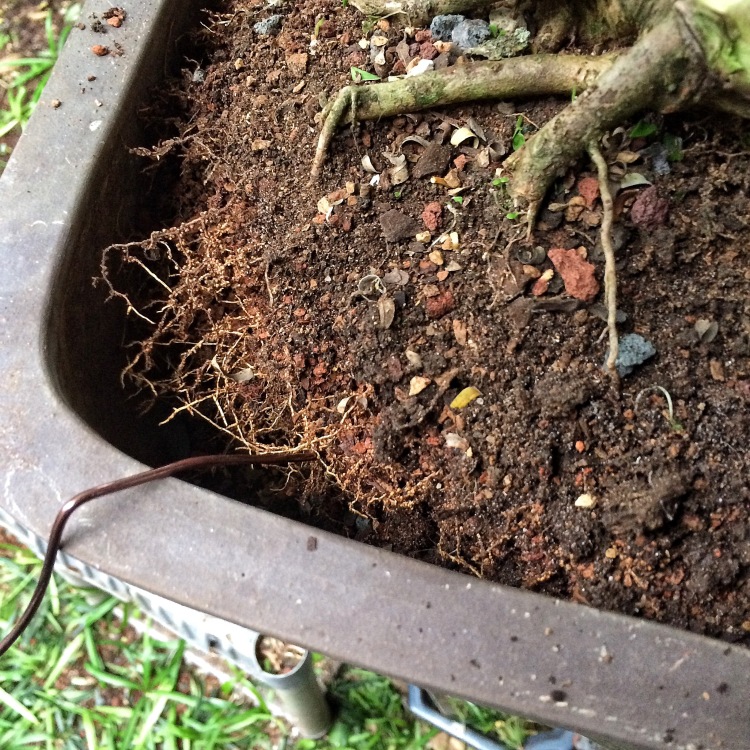 What I’m doing could be equated with planting the tree in the ground.

When you plant a tree in the ground you are supposed to rough up the root ball to stimulate new root growth. I’m not doing much more than this here.

Or it’s just that ale talking. I hope I didn’t kill it. Oh, I killed the ale, it’s so much more easy to chug when it’s warm.

Next podocarpus is the first tree I ever collected.

It was during a field trip put on by the Central Florida Bonsai Club to a members home who was removing her old landscape to make room for a new house. The first styling and carving happened years later in a demonstration for the Bonsai Society of Brevard. 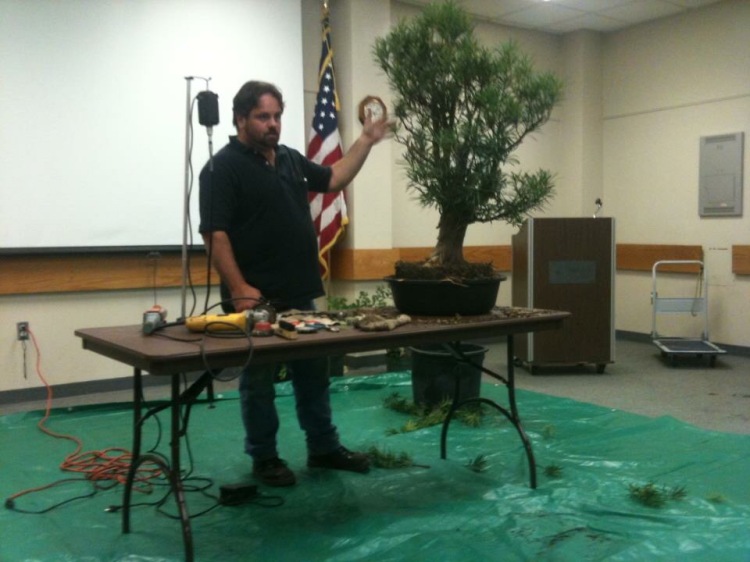 That’s me, probably telling a dirty joke about how hard the wood is and how much I like to work it. My bud Mike won the tree in the raffle and granted me custodianship of the tree to develop it (because it was my first collected tree, he thought I should keep it).

I can’t just turn it in the pot like I did with the previous tree because the pot is too small. Or the roots are too big, you decide. But I can put it into a round pot that’s bigger. 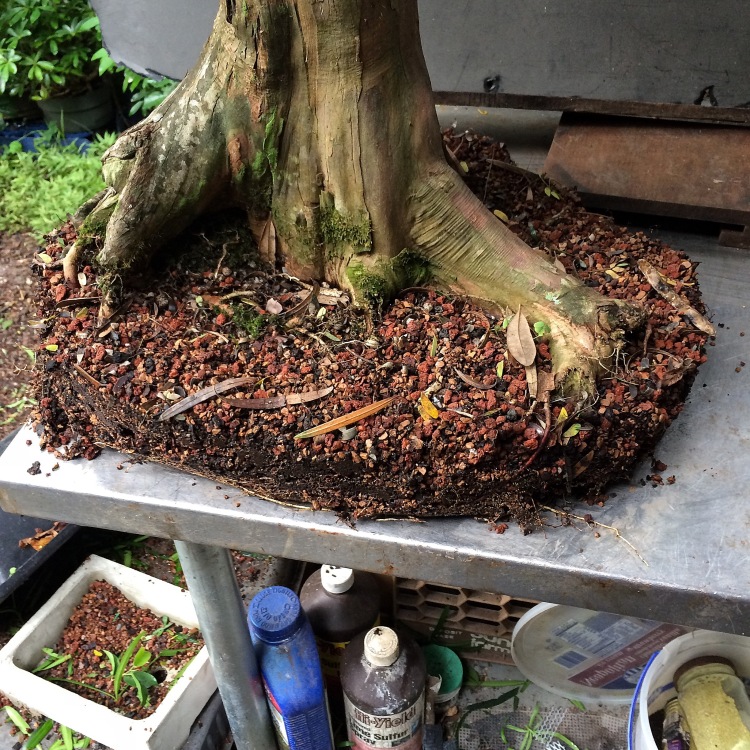 Now I’ll show you how I begin the process of ramification and leaf reduction. First, so I don’t mess up my fresh soil…. Like this…

I’ll take the opportunity to slip in a product placement whilst protecting the soil at the same time.

Available soon on the website, the Adam’s Art and Bonsai shop towel. Perfect for polishing your tools, masking a branch to see if you need it in the design, or just wiping the sweat from your brow after a hard days work on bonsai. Taking orders now!

And now, back to the program.

Step one: I defoliated most of the leaves except the ones towards the edge. Those were cut in half. This reduces the leaf surface area, stimulating the tree to put out more shoots (the leaf surface area for a tree is a fixed thing that that tree needs for photosynthesis and a tree will rush to put out new leaves, often doubling the number of them, when they’ve been removed.  But once that surface area limit has been met, those leaves stop getting bigger. That’s basically how we reduce leaf size. The more leaves, the smaller they get.)

I need to redo the carving, I’m still not satisfied with it yet.

Maybe next month. I need to study it some more. Next! 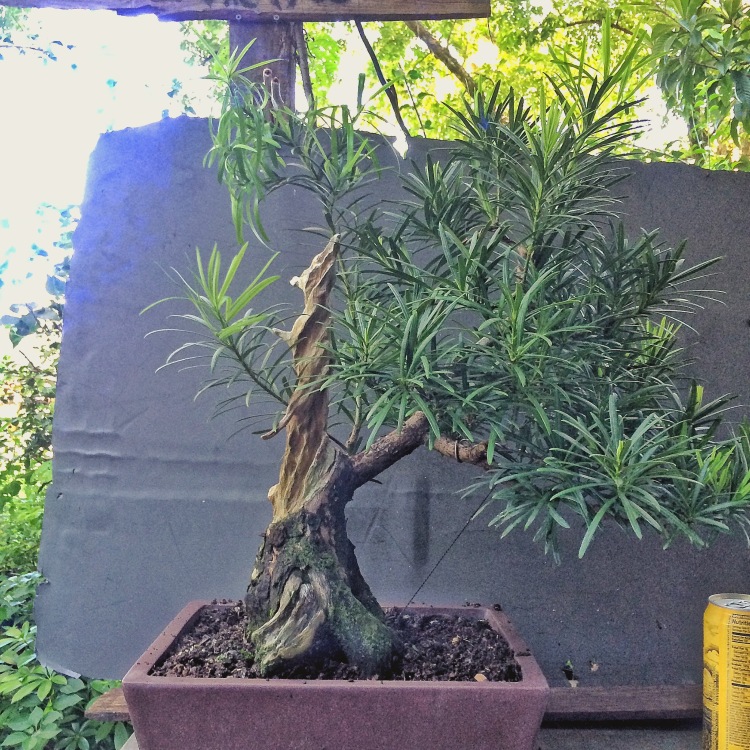 This tree belongs to my friend Bobby. He entrusted it to me when he was moving to South Africa for a non profit he had started. He told me to develop it.  Defoliate, cut the tips, a little wire (a lot) and…..

This branch is in an odd place but we need a lower back branch. 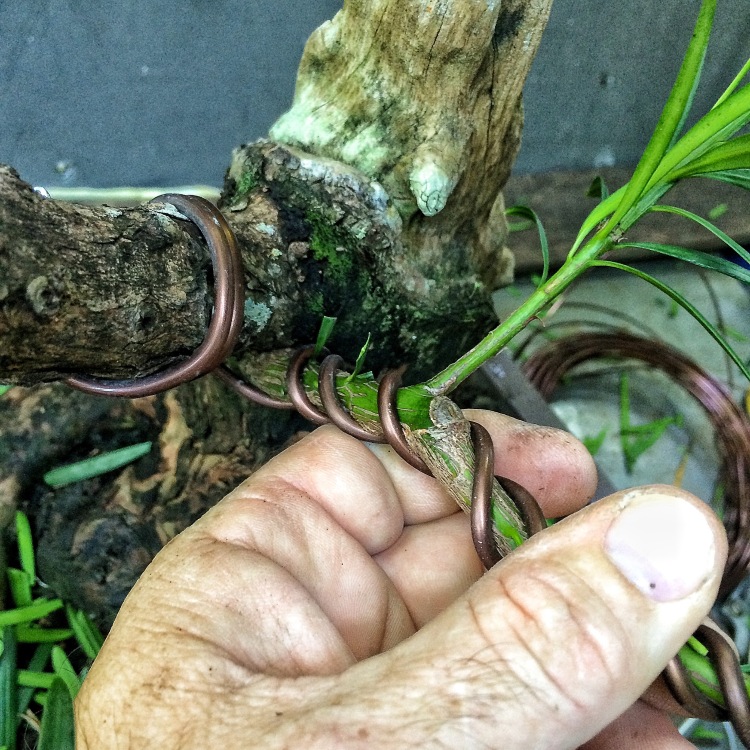 And, again, as seems to be the theme, I’d like to twist the tree in the pot. 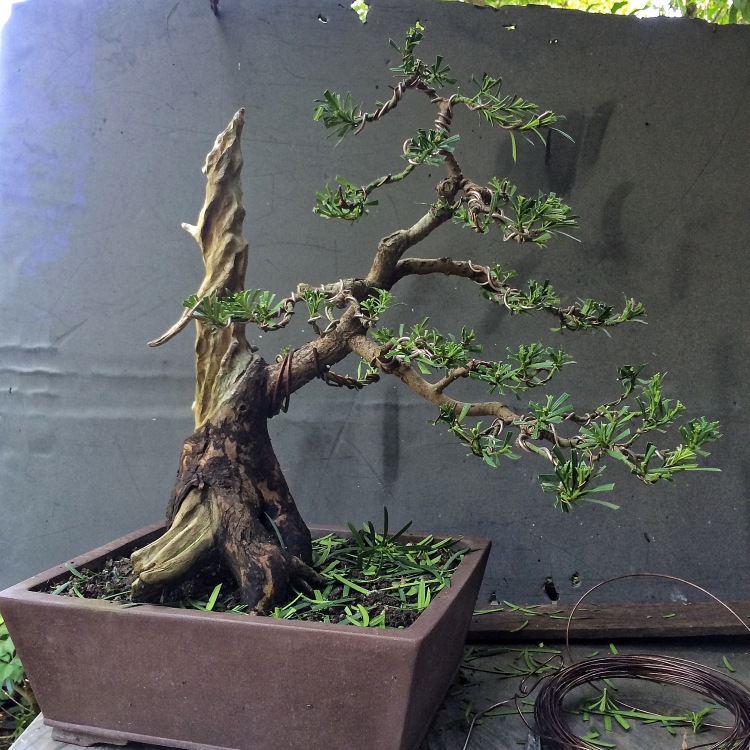 Now to the carving. 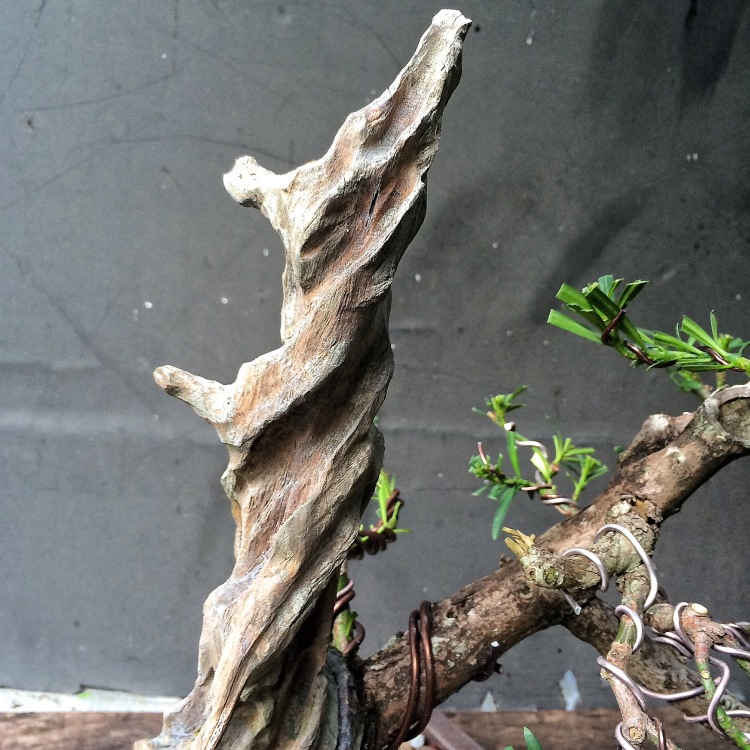 The original carving was done by a certain famous bonsai artist of whom will remain nameless. I’m not a fan of the swirly sharp stick style,so I tried to make it a little more natural. I’m still not satisfied with it, so…… 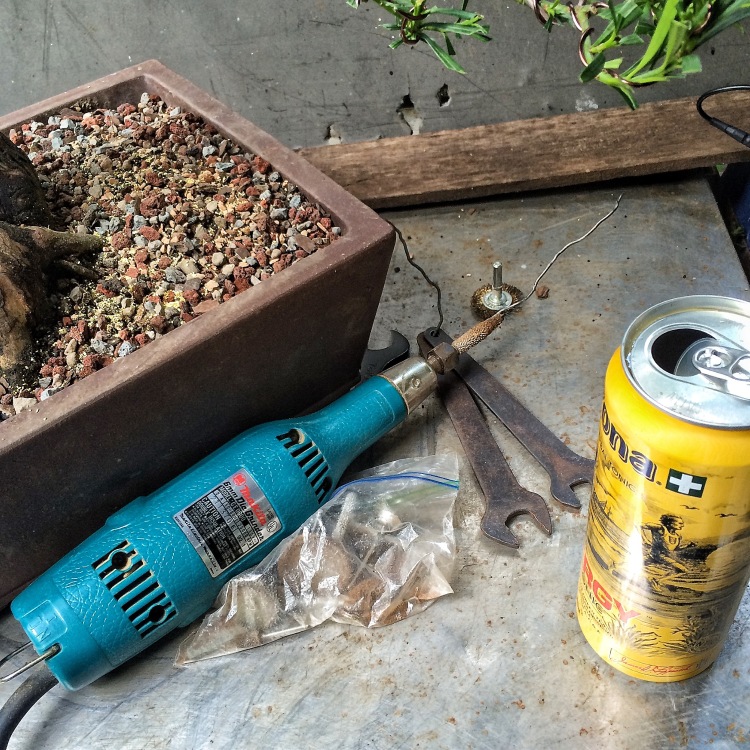 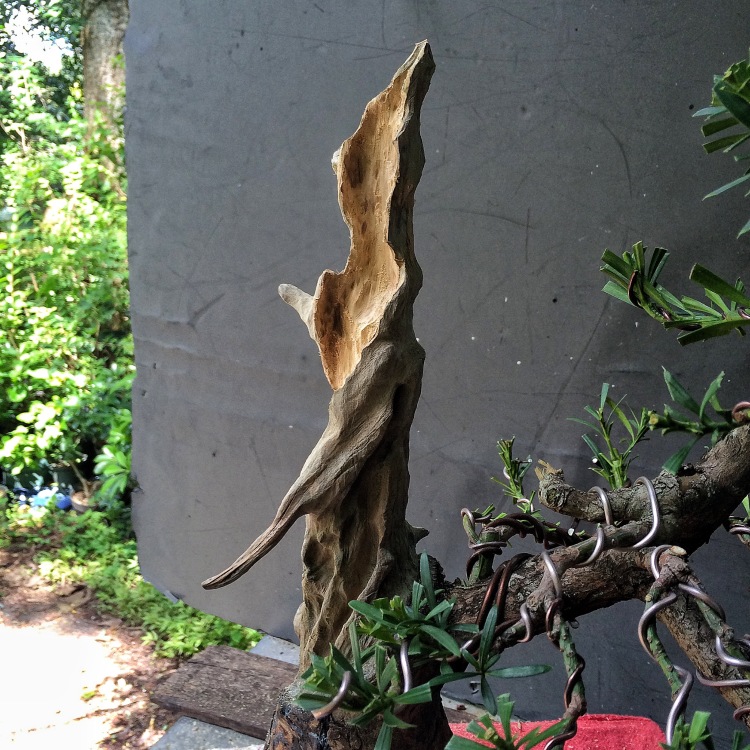 Not bad. I still might shorten it. I need to study it some more too.

Some fire and a wire brush, then some lime sulfur.

And that’s that. In case you were curious, this work took place over several days. Hence the different beverages and light levels/intensities. The wiring on the last tree took about two hours or so.

On all of them I fertilized heavily. Here in Florida I’ll get what I call a second spring. Most trees here stop growing during the summer, just soaking in the sun and storing energy. But, when the temps begin to cool, they’ll put out a whole new flush of growth before winter. This second spring is why you should be jealous of us Florida bonsai growers.