This, I believe (I’ll have another beer) is a pink pixie bouganvillea. It just might be a purple one though.

It is thornless, and that is what makes me believe in the pink pixie paradigm (sounds like a conspiracy theory. Or a punk rock band). Although I dunno why they calls it pink. It’s more of a lilac. Maybe orchid or lavender even.

But that would confuse you, calling a bougie’s color lilac, orchid or lavender. That might be the conspiracy, calling a shade of purple, pink, to test the color sensitivity of plant collectors in order to dupe them when they start selling puce colored candy canes for Christmas (a nickel to whomever can tell me what that reference is from)

Or maybe just the guy that hybridized it wasn’t able to pass the color tone test from the last blog. But that hypotheses is boring. Pointing out the inequities of my fellow man is the recreation of choice when I’m tying one on at the bar, not for my bonsai blog. Unless I happen to be writing  while I’m sitting at ‘ye old watering hole. Which I suspect some of my dear readers are thinking is happening at the moment. To the tree!

Pretty cool. And short/fat too. I got the tree years ago from a man named, amazingly, John Petterson. He has the deepest, most resonant voice in bonsai, I believe. He is often tapped as the auctioneer at various clubs’ Christmas parties. I don’t know what that has to do with bonsai but…..sold, to the man in back with the cane!

Anyway, I had Jason Osborne in for the last NoNaMé Bonsai studygroup meeting and somehow (don’t remember how) I showed him the tree and he held it all crooked like and said, quote “You know Boss, this would make a keen semi-cascade….” 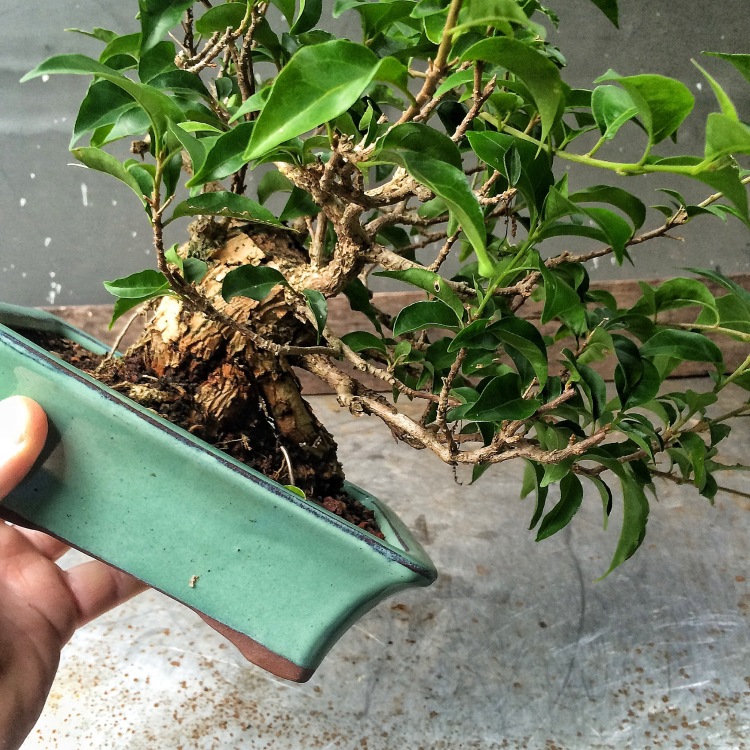 I looked at him, all crooked like, and said, quote “I think you are correct, Chef…” To which he replied, quote “fer sure, dude….” I looked at him even more crooked like (hey, if I’m going to make up dialogue I might as well get a laugh or two. He is a chef btw. In fact, some of my best bonsai friends are chefs, or rehabbing chefs (chef-ery is sometimes an addiction). There’s Jason, Ryan, Glenn…..well, that’s it I guess….and who puts a parentheses  inside a parentheses any way?)

You know what comes next, right? Defoliation! 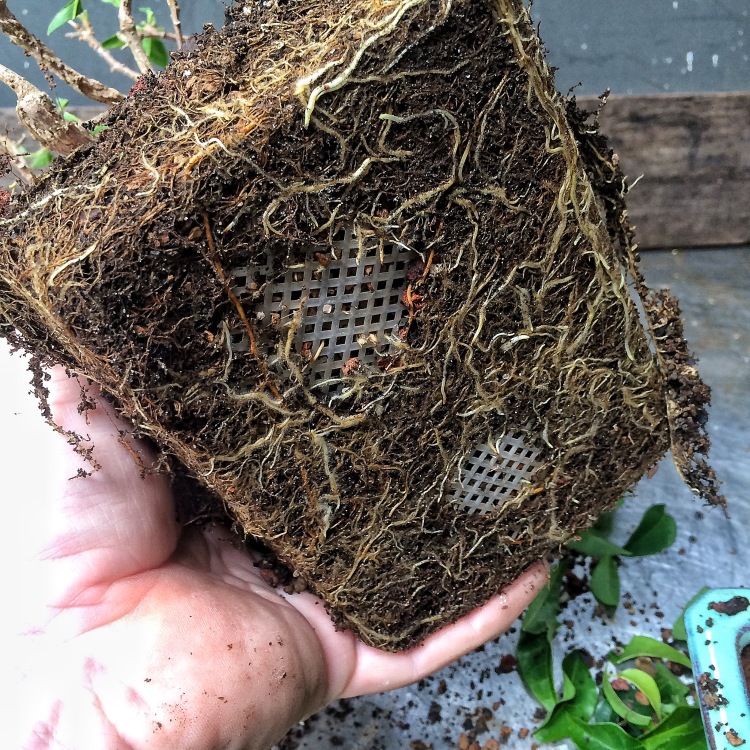 It needed it, fer sure, dude. 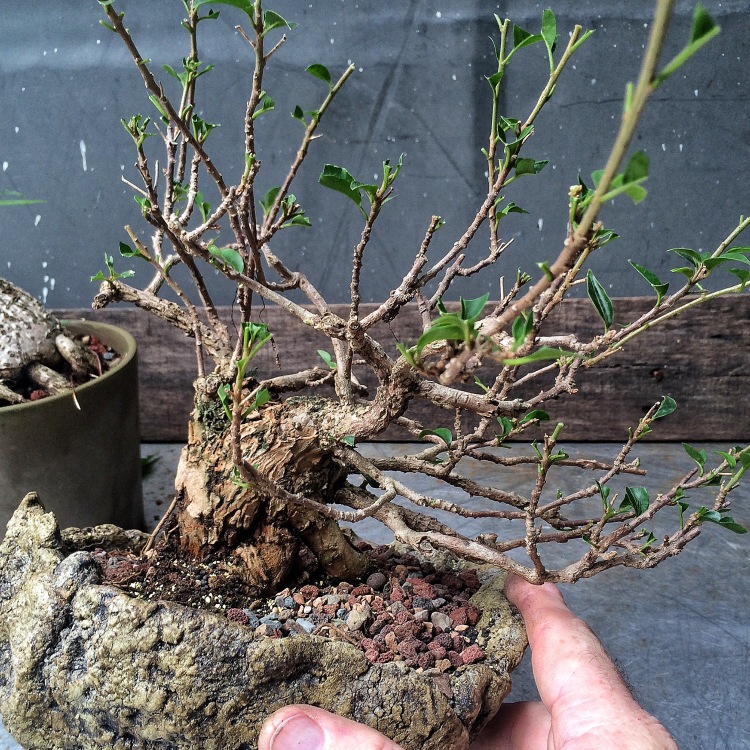 You see all the branches? What I’ve been doing to this tree (and this is the way to develop a bougie) is topiary (or hedge) pruning.

Then, when the time comes to style it (and with a thin, but narrative, word salad to accompany the pics) you suddenly have all kinds of branches to prune, wire and bend now. 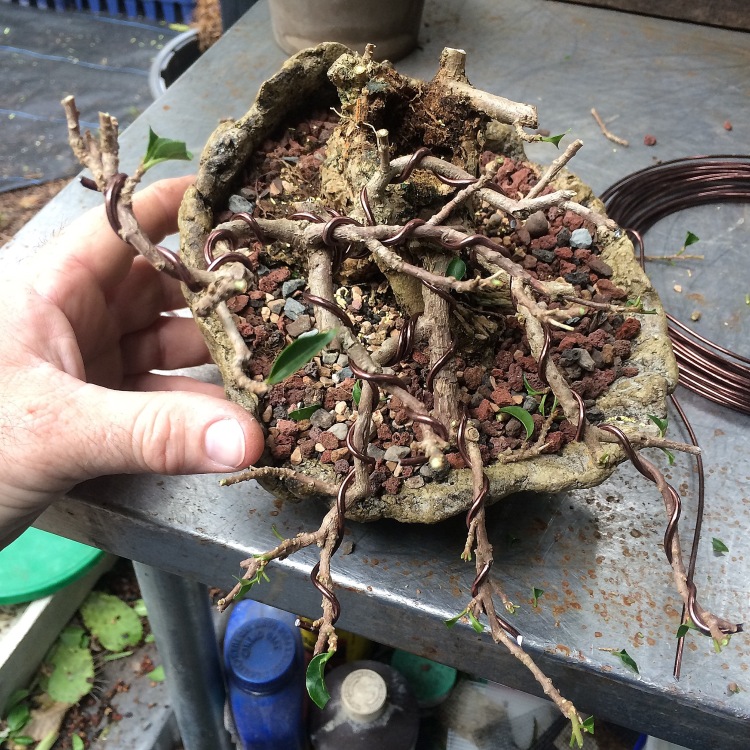 It’s gonna look all cool and stuff with flowers (pink or lilac or whatever color they are).

Hum. It seems we have a little more space to fill……how about an update on a Willow leaf ficus we’ve been watching?  A ficus salicaria from this post.

The wire is, again, beginning to cut in. 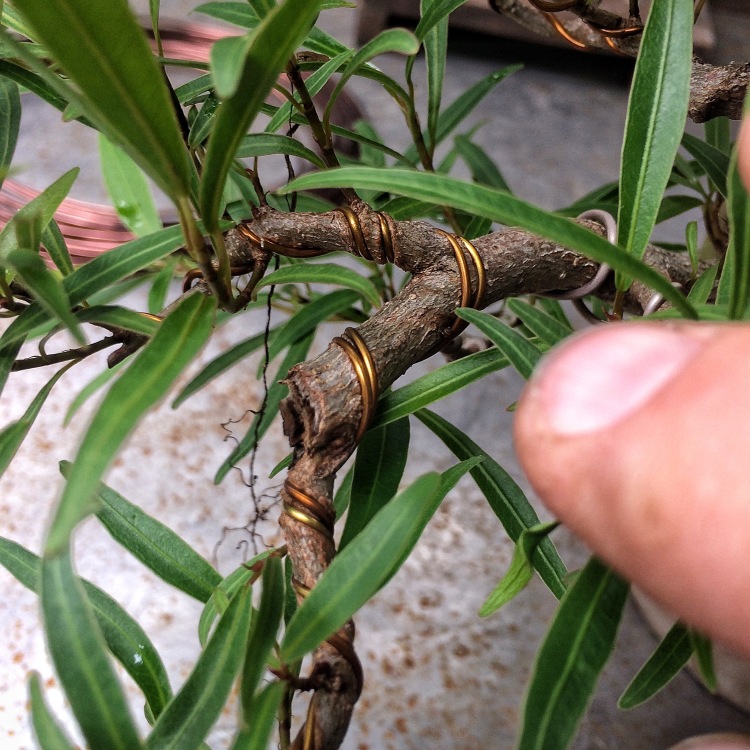 But the main cascading branch is creeping back up.

This was at the beginning: 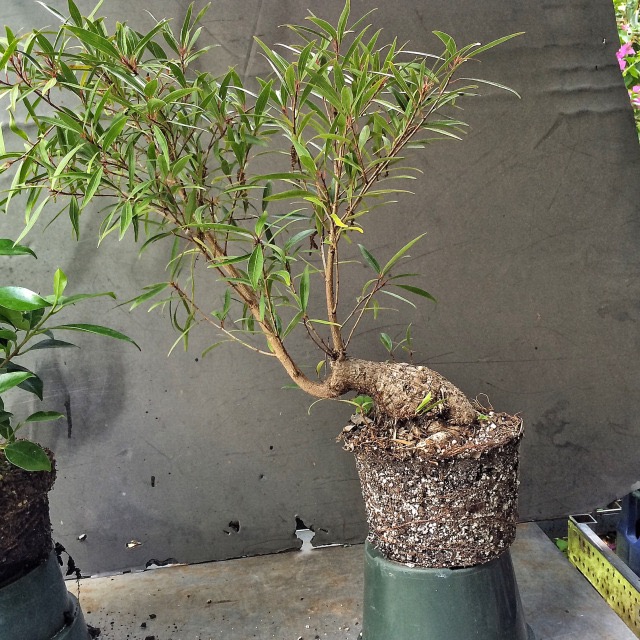 This was after the first styling:

And after the second styling: 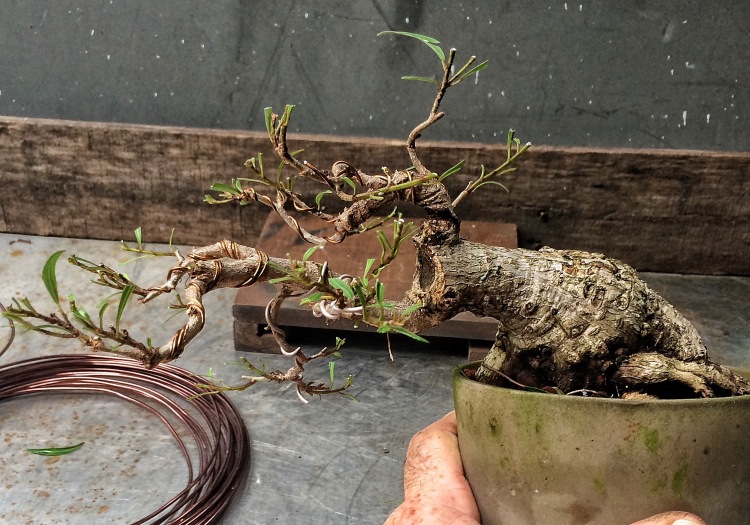 I’m going to have to reapply some heavy wire to the branch or this will be a formal upright in just a few months.

And, unfortunately, it ain’t gonna be pretty.

But, sometimes we have to make our trees ugly so that they will be more beautiful in the future.

I have a feeling I’ll have to keep this wire on until some serious scarring occurs, and then wrap it in the opposite direction and do the same. Maybe even a third time. We shall see.

A cool meme you can share with your peeps: 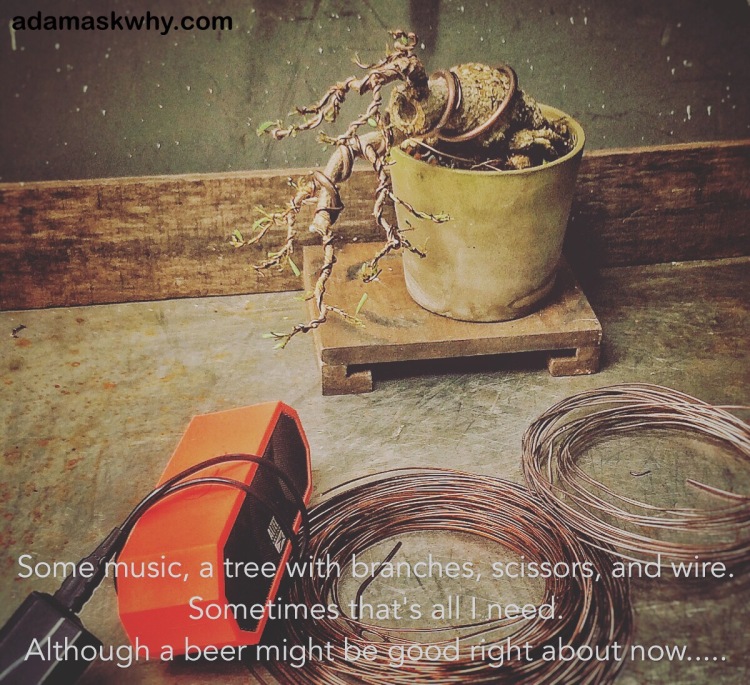 The very first visiting artist I ever saw (a Canadian, if you can believe that…in Florida!) called cascades the “pain in the neck” style. I thought it was bacause of the angle you have to hold your head when working on them. I now realize, after training them for several years, that he called them that because they don’t want to grow that way. You have to fight the tree at every step. I think it would have been less confusing if he had called it a “pain in the ass” style. But they are, to steal from the above mentioned Ryan, a dynamic and dramatic tree to view.

And that makes it worth it.