This could possibly be the last Joy of Bonsai the the Kawa Bonsai Society of Florida puts on. It’s definitely the last one in its historical venue; the Vp, Louise Leister, had been employed by the Volusia County Agricultural Extension office and was able to secure the building for the show, she is now an independent consultant and doesn’t have that prove large anymore. And considering that the Club is technically in the middle of no where, there is a distinct lack of places for next year’s show (the city the building is located in is called Bunnel, look it up on a map. There are roads but not much else. I don’t think there’s even a McDonald’s in the town…..think about that!). Maybe they’ll find an indoor sports arena like Bill Valavanis did for his National Show. One can hope, I think more bonsai shows should be held over AstroTurf®.

Anyway, I think I’ve alarmed you enough, let’s calm ourselves by looking at the trees, shall we? First, the long shot: 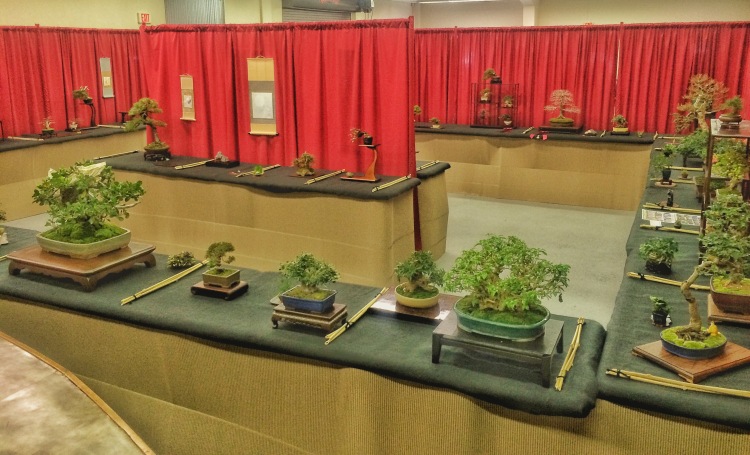 What you see, for those who wish to organize their own exhibitions, are regular 6 or 8 foot tables that are on foot tall, pvc pipe risers. The table tops are a blue-grey burlap and the skirts are corrugated cardboard packing material. All very re-usable. Notice also that each display is separated with a bamboo bundle.

The real investment the club made was the red cloth backdrops. They are specialized backdrops with tubular steel structures and heavy plates on the floor. Very usable but definitely not cheap.

Ok, to the trees, with little commentary. Some of the trees I’ll guess the species. But I’m good at guessing. And, as always with these things, if I make a mistake or left one out, let me know and I’ll fix it. 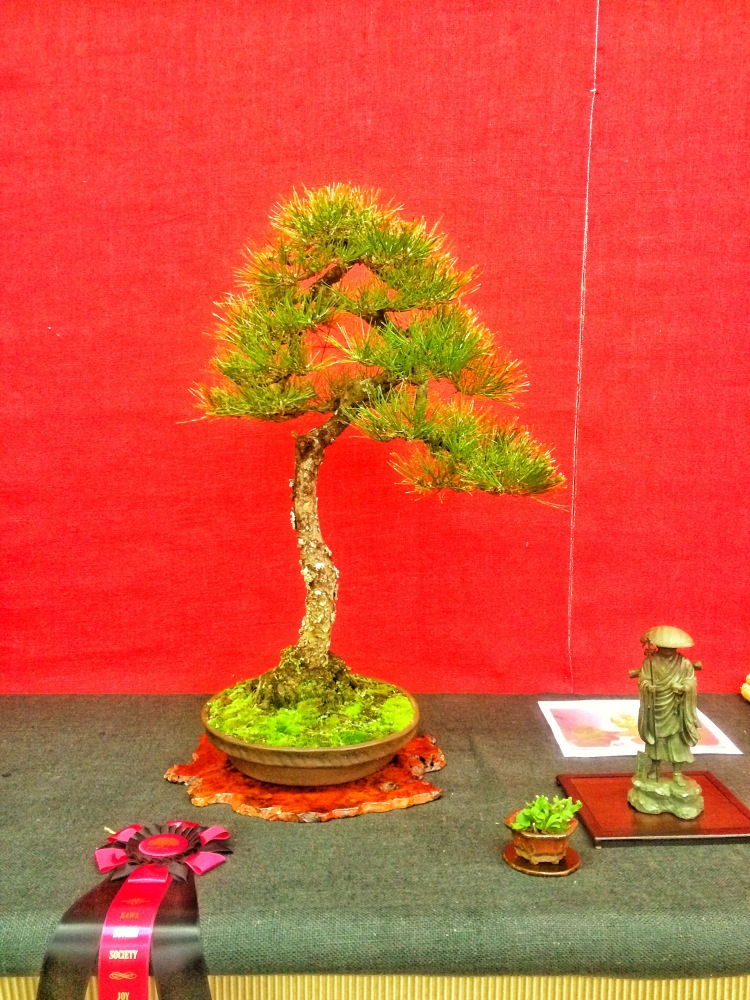 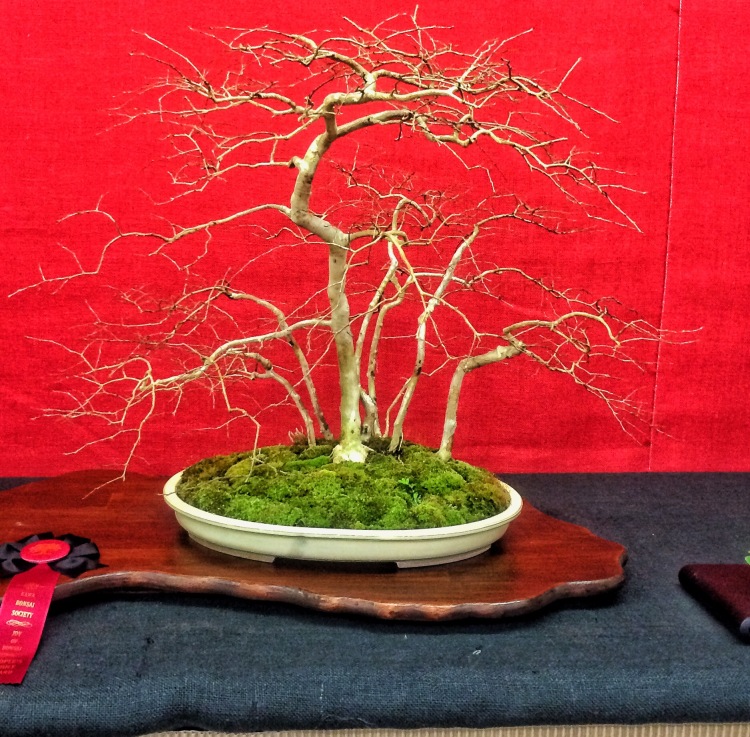 I think the next is a foemina juniper 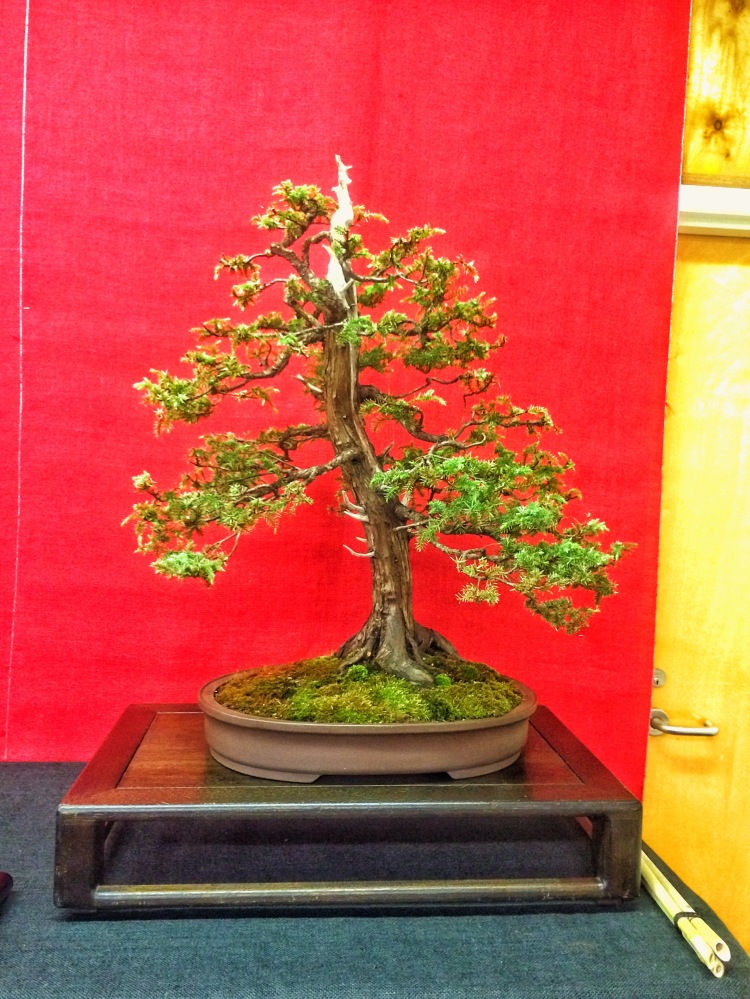 This one looks like maybe a maple, or it could be a hackberry.

I’m not sure of this one, the bark looks like it could be pomegranate.

Here’s a look at the pics before I edited them.

I cropped and levelled them obviously but the real challenge was making the tree look good with the red background.

The next is a hackberry. 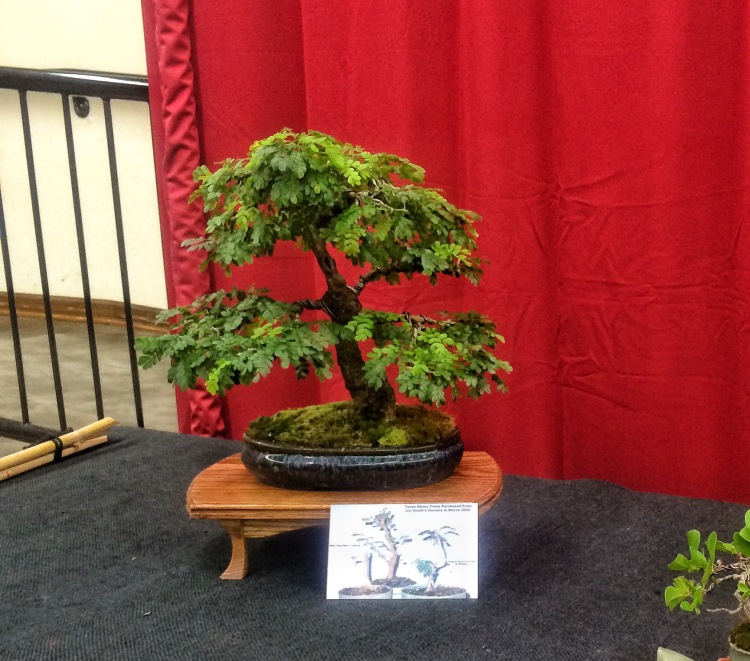 You’ll notice there are ribbons a on various trees. Honestly, I didn’t pay attention to the categories but this might have been best shohin. 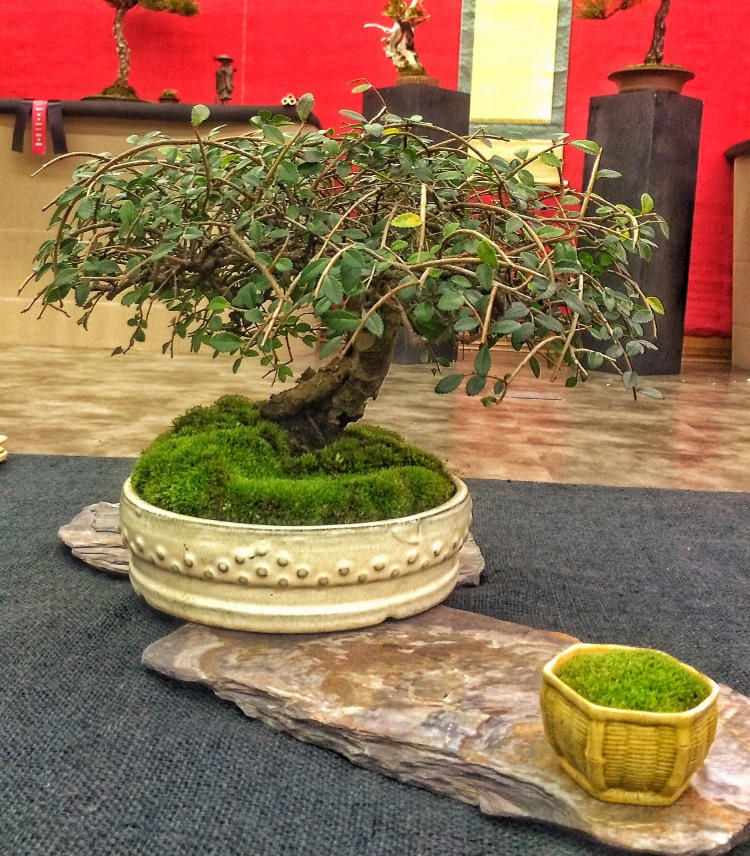 The weeping branches come from a treatment of a growth inhibitor when the tree was imported.

From the bark, I’d say jaboticaba

A shohin display with various trees.

An azalea of some sort. 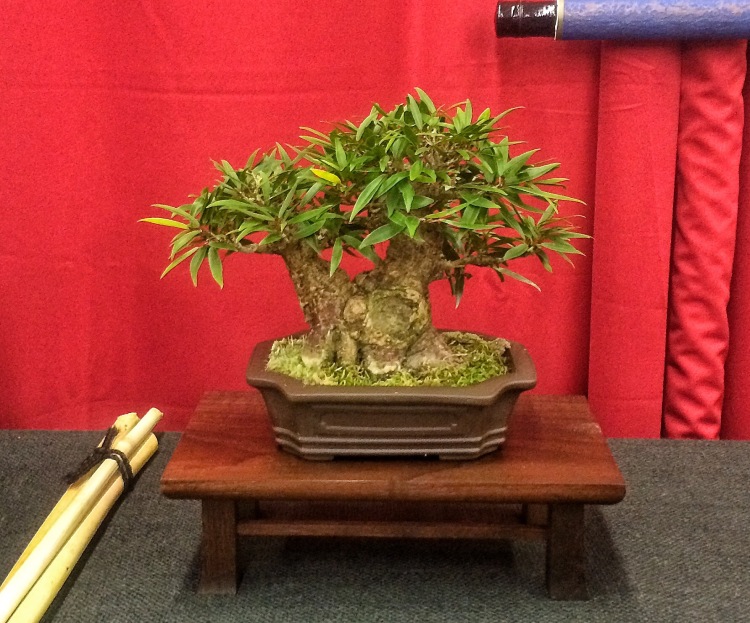 A defoliated ficus microcarpa (I think) 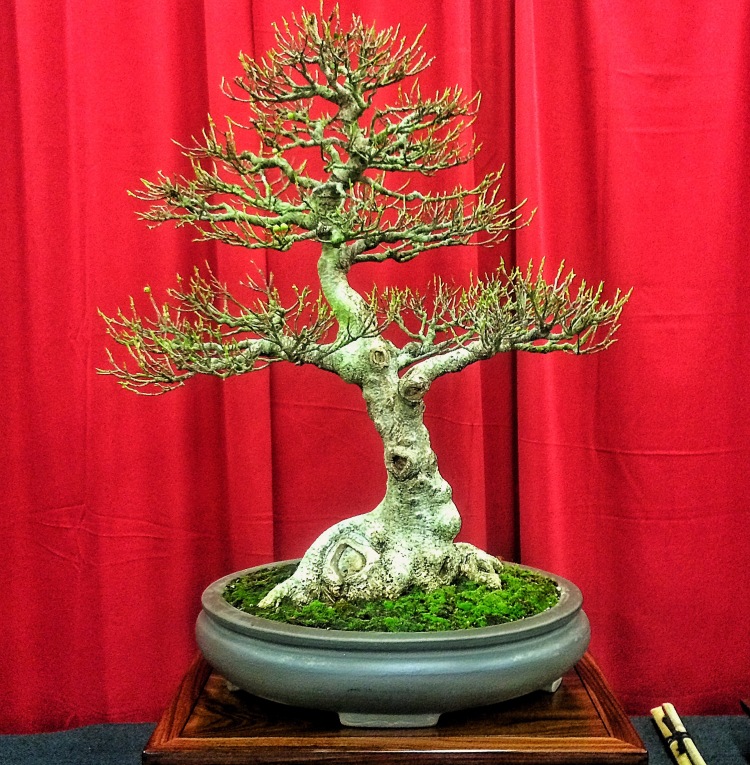 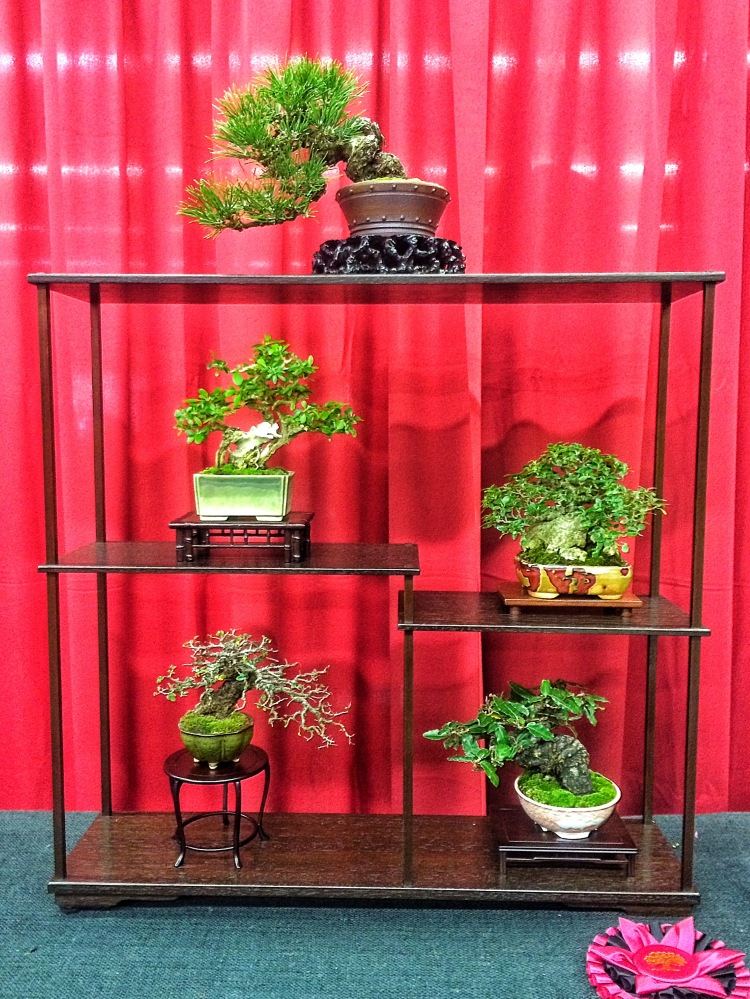 Sargent’s juniper on a root stand carved by Sean Smith, I believe. 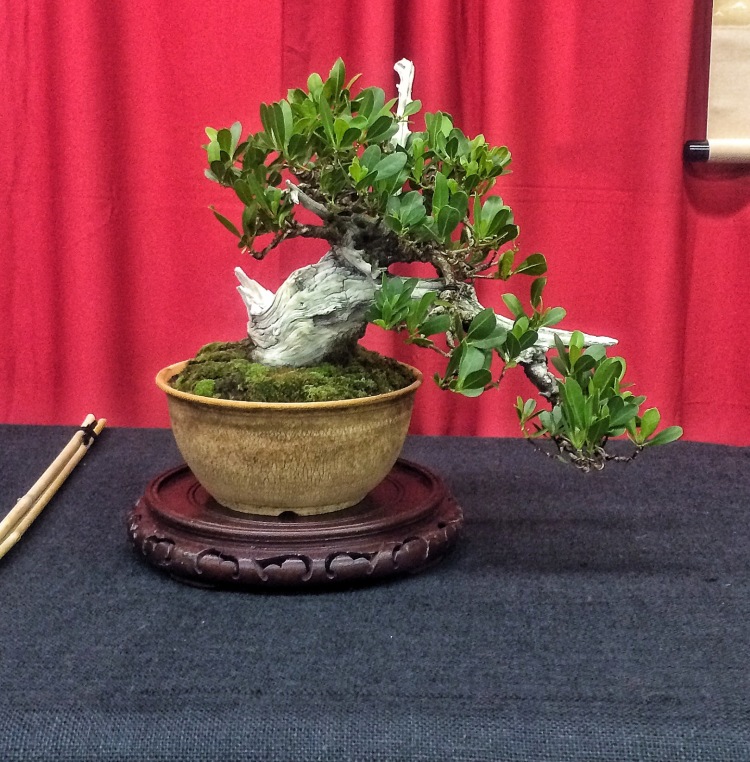 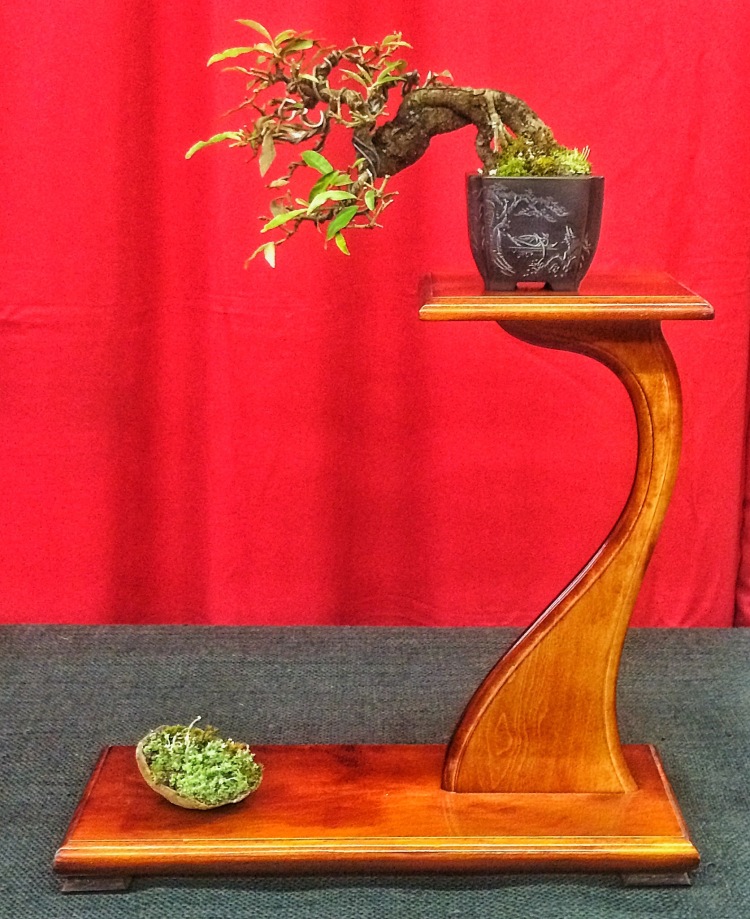 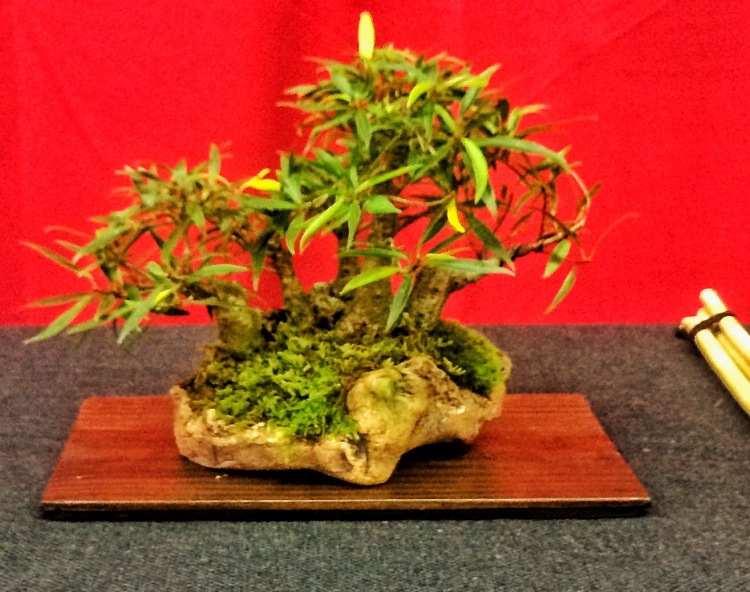 And lastly, a Japanese black pine. This one is very natural, I like it the best. It looks like an old Florida slash pine.

And that’s that. Let’s hope Louise finds a venue for next year, this show deserves a good spot.