So, my friends, you are wondering what’s going to happen to that stumpy ilex I left you with in the last post.

I gave you a not-so-precise idea in a virtual scribble and a possible future for the tree. 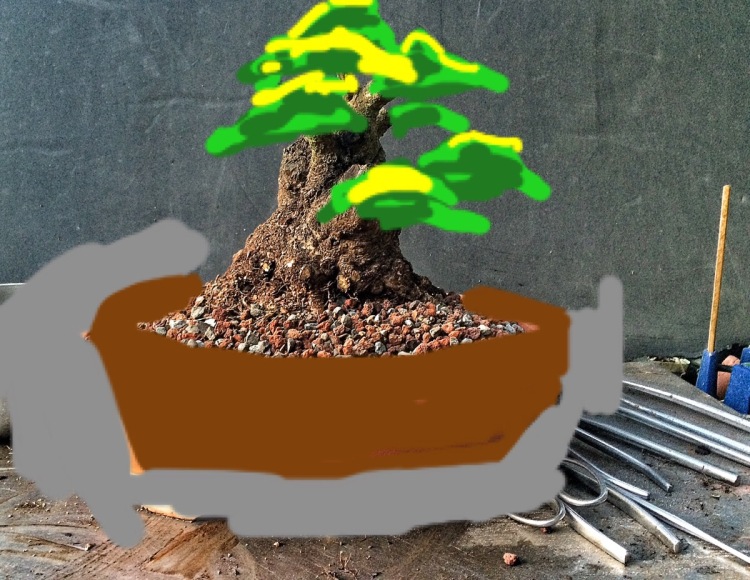 Which could happen, I can see a very tight, sumo style tree there. Else I wouldn’t have drawn it that way.

But the knowledge of how it could grow has come from the experience I have working with this species. You can say that I have a certain obsession with the Schillings holly. Let me share with you some of the growing secrets I’ve learned, which, amazingly, are applicable to other trees as well as the ilex vomitoria.

Here’s an ilex that’s ready for its initial potting that I can teach on.

It has a fat base and excellent taper.

It was a tree that grew in a hedge at Rollins College here in the Orlando area. The groundskeepers were removing them and a CFBC club member, Alan (who is the greenhouse manager there) rescued several of the bigger ones. This being one of them.

He potted them up and, after a few years,offered them to the club for demo purposes. That’s where I come in.

The CFBC then had me do a demo on two of them. My friend Juan won the tree in a raffle and was so happy….

….he did a little dance.

Here’s the sad part, Juan passed away very suddenly a few years ago and his widow, Barbara thought I should take the tree. I have several of Juan’s trees and I am developing them to the best of my abilities.

I am glad to. They will never be for sale either.

Back to our subject, the ilex demo went almost identical to the “masterful styling” I did on the ilex from the last post. I didn’t lie, they grow back with serious intent. 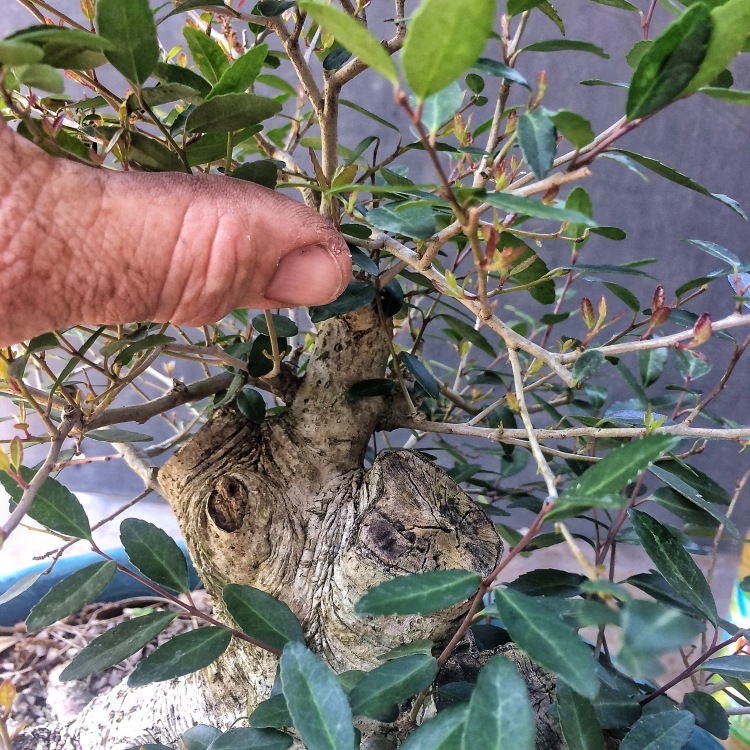 I’ve had the tree those two years and I think I’ve trimmed it, majorly, about 10 times. It almost seems like the tree is set on overdrive if you prune it often.

The ilex vomitoria “schillings” variety is a sport of the male I. Vomitoria. Which means that one branch, on one tree, so long ago that no one has put the story on the internet yet, started growing in an accelerated but dwarfed habit. Imagine a 15 foot tree with a tuft of schillings bush growing off the side. They sometimes call that a witches broom. Something, maybe a bacteria or a virus, caused the DNA to shut off some genes or activate others and create the bushy dwarf tree I so enjoy for bonsai.

You can see the original chop marks from the CFBC demo, in red. 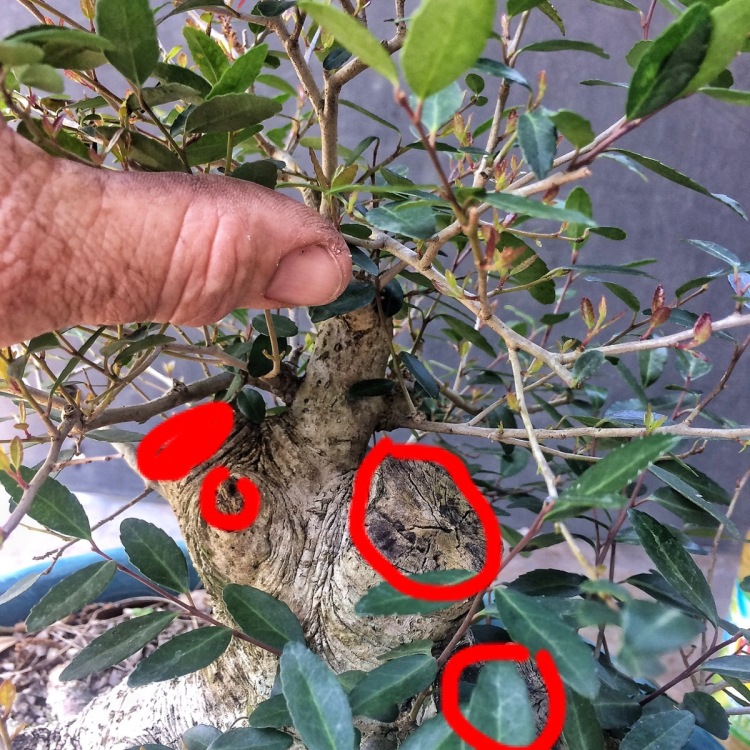 One thing I’ve learned working with these trees is that the best way to get branches where you need them is to leave stumps (or knobs, as John from Facebook wanted them to be called. I think he just wanted me to say I was playing with big knobs) when you prune off big branches. Let me explain.

Here’s a typical tree (this technique I’m illustrating will work for many, if not most trees)

My crudely sharpened pencil point is indicating what is called the “branch collar”. When pruning a bonsai with concave cutters, we tend to remove the branch collar because we think we need a flat or slightly indented cut.

And sometimes that is exactly what we want. But….BUT…if you want a new branch to grow, leave a stub. Like so:

What will happen is you’ll get a new bud (and  therefore a branch) close to that spot (usually under it). The reason one cuts off heavy branches like this on an ilex is easy to explain: the branches, once grown to a certain thickness, just won’t bend or, are so brittle, they’ll just snap if you try to bend them.

And here’s proof from our tree today that leaving an intact branch collar causes new buds to form around it.

The branch collar is actually the node (from whence new buds form).

Like I said, I’ve had to remove a lot of branches, so what you’re seeing is the result of choosing the strongest of all those shoots. But now it’s time to pick a front.

I like this one. I hope it works. I haven’t seen what’s under that soil. 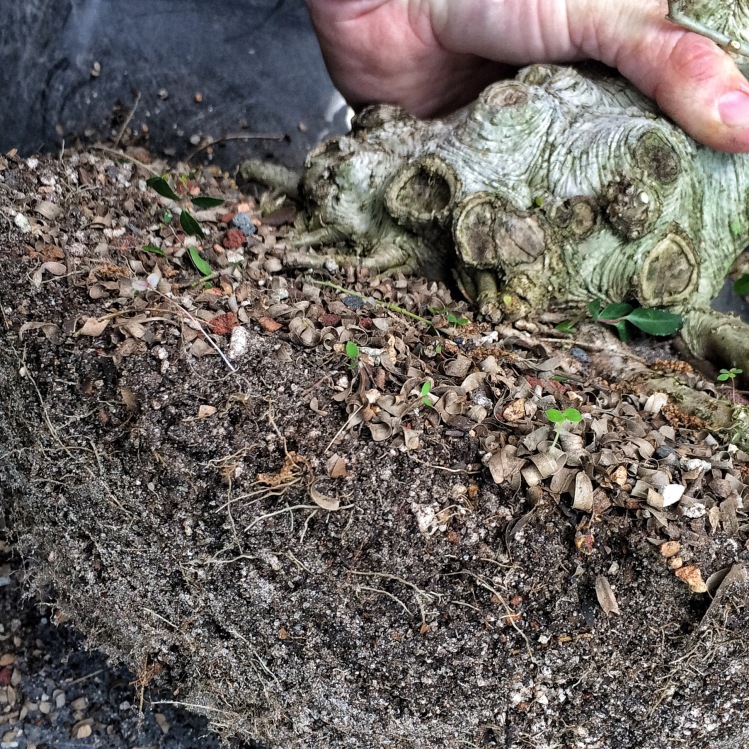 Gently, gently, I tease out the old soil.

I don’t like this. There’s a huge root mass under the surface roots.

Not good for putting the tree into a shallow pot now, is it?

I guess there’s a reason I have these heavy duty root pruners. 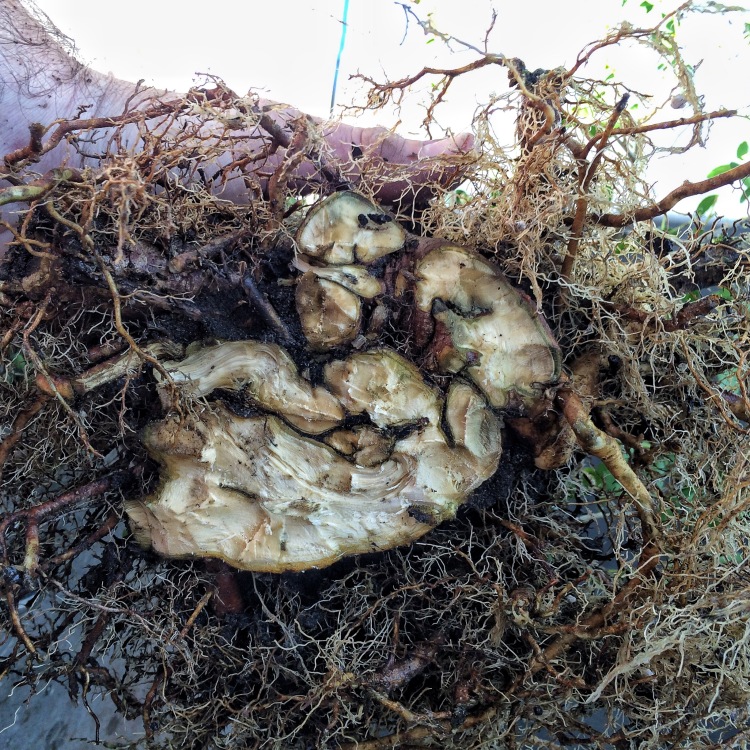 That’s about as good as I can do at this time.

It should be good for now. It’s only going into a training pot.

And, technically, it is shallow enough to fit into a properly proportioned pot.

Which means the pot should be as deep as the trunk’s thickness. I think I have something that will work.

I think I’m cookin’ with gas now. Some soil. 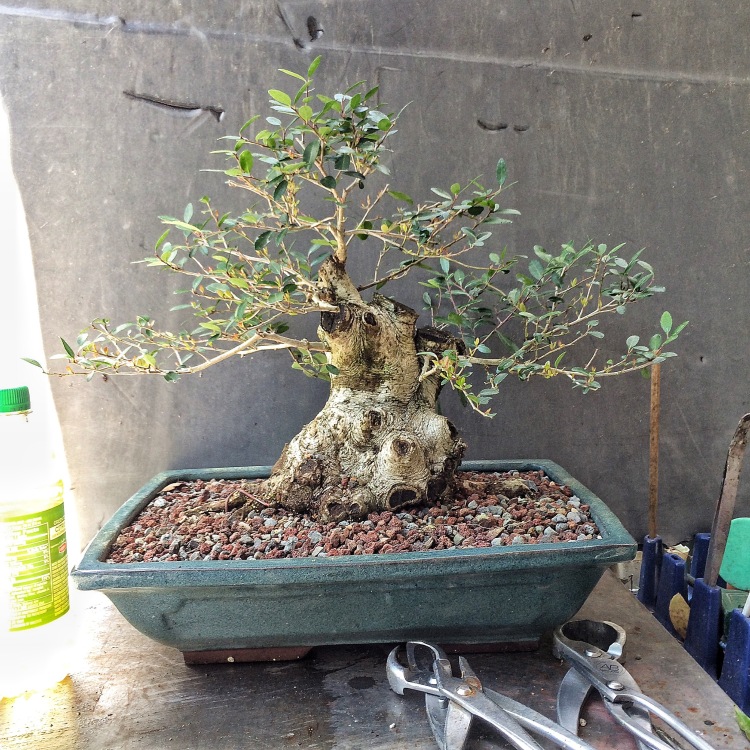 I mentioned earlier that the branches tend to be brittle on an ilex. That is very true, unless you let the new branches grow without trimming. Once you begin trimming the ends, instead of pushing length, the tree starts to lignify that branch, making it more brittle as a result.

So the whole lesson here is to cut the big branches and make sure you wire the new ones before they get too brittle.

Which means that, here, today, in this place, in The Nook, it is time to wire.

Ok, after I trim back the knobs with my spherical knob cutter.

It’s a little weak on the right but it will fill in fast. Watch social media for progress and I’ll update here in a few months.