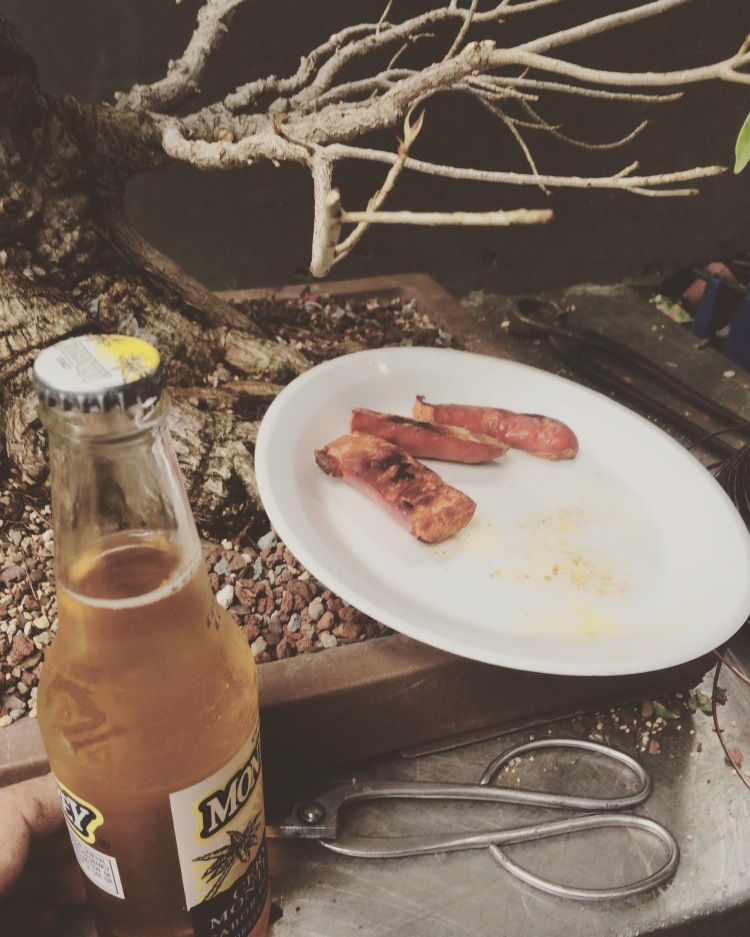 Linguica sausage and Mexican beer, a meal fit for royalty. I’ll need it for all the work on this magnificent specimen.

Ficus salicaria (willow leaf ficus. And yes, I don’t care who you are, it is f. salicaria, not nerifolia, not salicifolia, not even subulata, as one prominent bonsai professional has taken to calling it). This is one of the trees I’m babysitting for Steve. He definitely knows how to grow them (wanna know his secret? Let them grow! They don’t need to be perfectly groomed all the time, as much as you think you need to be fiddling with it.)

First step, weed. It needs it.

And yes, I use tweezers. 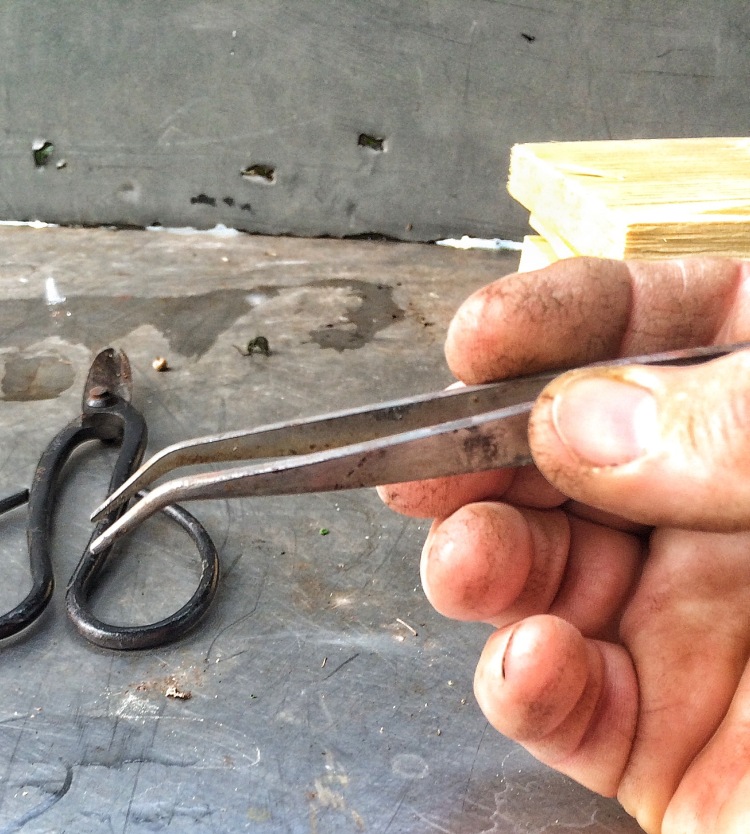 In the last blog post (where I actually worked on a tree), I talked about oxalis. This time I’ll expound on the evils of artillery fern. 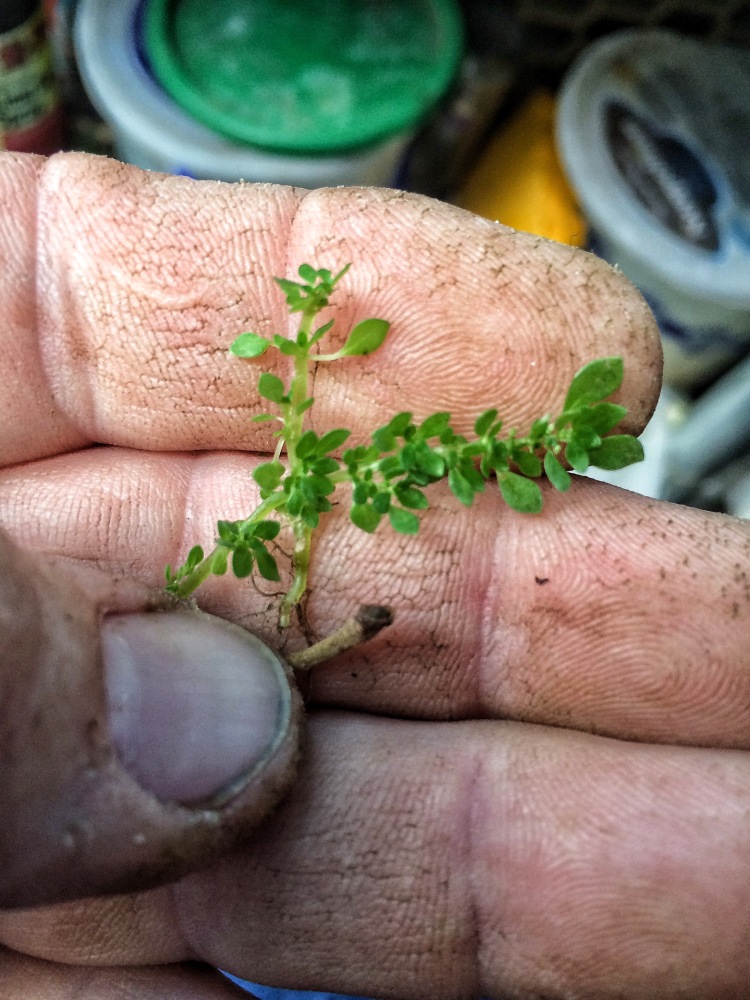 This isn’t the first nor shall it be the last time I talk about this noxious hell plant, pilea microphylla. In doing research on the plant, it amused me that it is considered an ornamental and is even sold as such. I find it even funnier that the method of propagation recommends the use of rooting hormone. Let me tell you…..one could take said weed, grind it in a food processor, add it to pesto, put it on a pita chip, eat said pita chip, digest and pass it, dedicate the poo and scatterit on the ruins of an ancient Pictish city state destroyed by Conan the Barbarian, the houses burned, the survivors crucified, the land salted so that no other crop could ever grow the earth again (except for maybe the grass on a soccer pitch, but that’s another type of hell I won’t go into here), and you would have artillery fern covering the earth like a hippie chicks pits in a month. I mean, I mean! Even the evil chemical glyphosate merely dwarfs it. Making it seem even more cute to those who don’t know the insidiousness of the weed. And it is kinda cute and all. But it is evil. Evil!

There we go. I feel better now.

Lots of roots. Wait ’till you see the fibrous roots underneath. Today’s work will be a repot, prune and wire job. Basics. 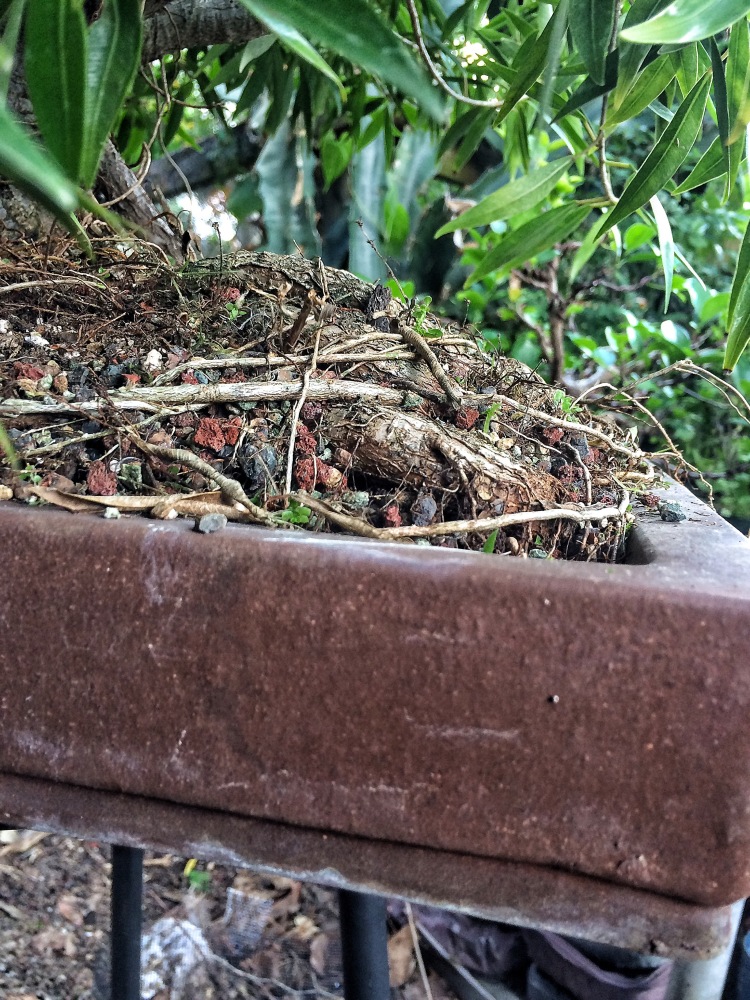 It’s pushing out of the pot. But first I’ll defoliate so you can see the branch structure (defoliating a tropical tree helps to reduce the stress of repotting, try not to defoliate a juniper. Not good).

Enough talk. I gots work to do.

And you thought decandling and plucking pines was dirty work.

I made a go at counting the leaves. If you can gues how many I got to, I’ll give you a wooden nickel. 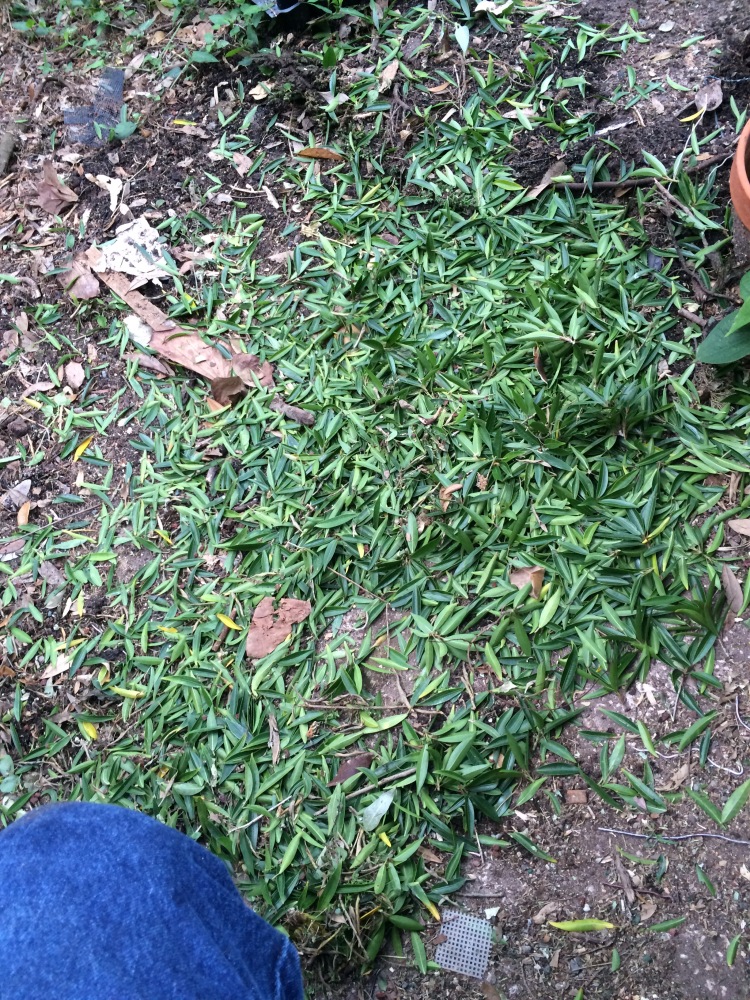 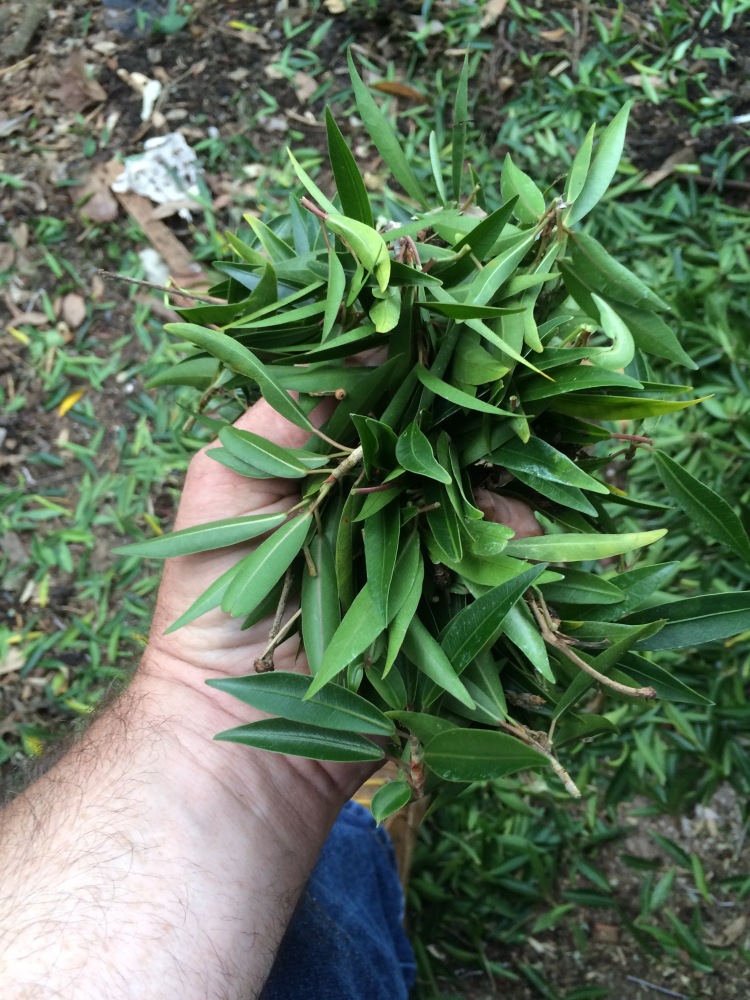 You’ll notice the exuberant amount of fine aerial roots on the trunk. 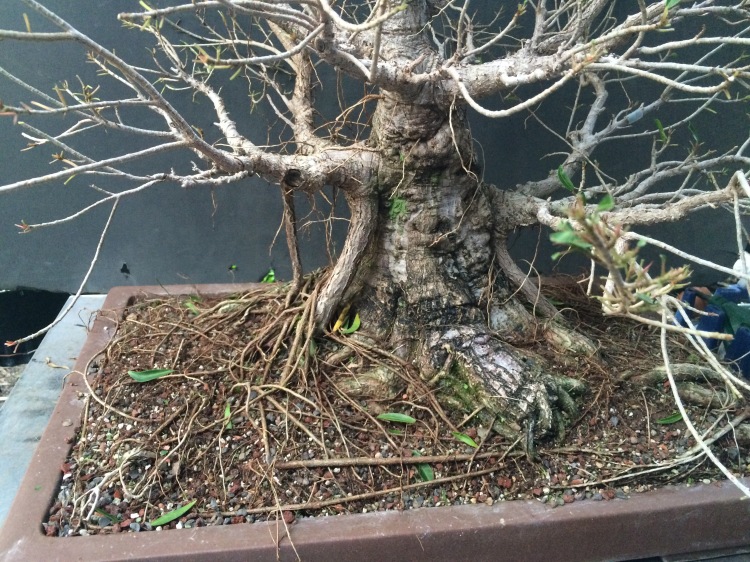 Reminds me of my wife’s legs in the winter.

We don’t want them here, the trunk is too pretty.

I’ll get in trouble for the joke about my wife’s legs, pray for me.

The aerial roots on the trunk do have uses. This is the trunk chop site.

It’s in the back of the tree and its just about healed. The big roots helped heal the chop. I could use these to continue the job. 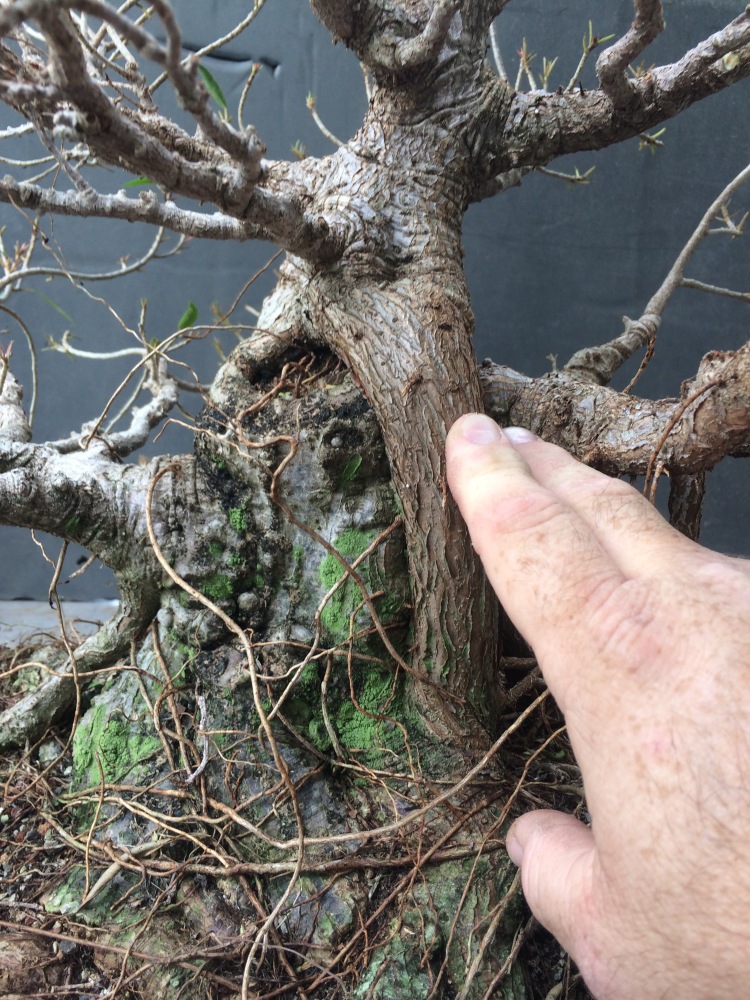 Some of the inner circle who saw the trunk with all the aerial roots in front urged me to remove them. Sorry guys, I like them. It’s not a ficus without them. They especially don’t like this one.

But it hides the one in back that’s healing the chop.

Without it there’s actually reverse taper.

And, as I said. Ficus means aerial roots. 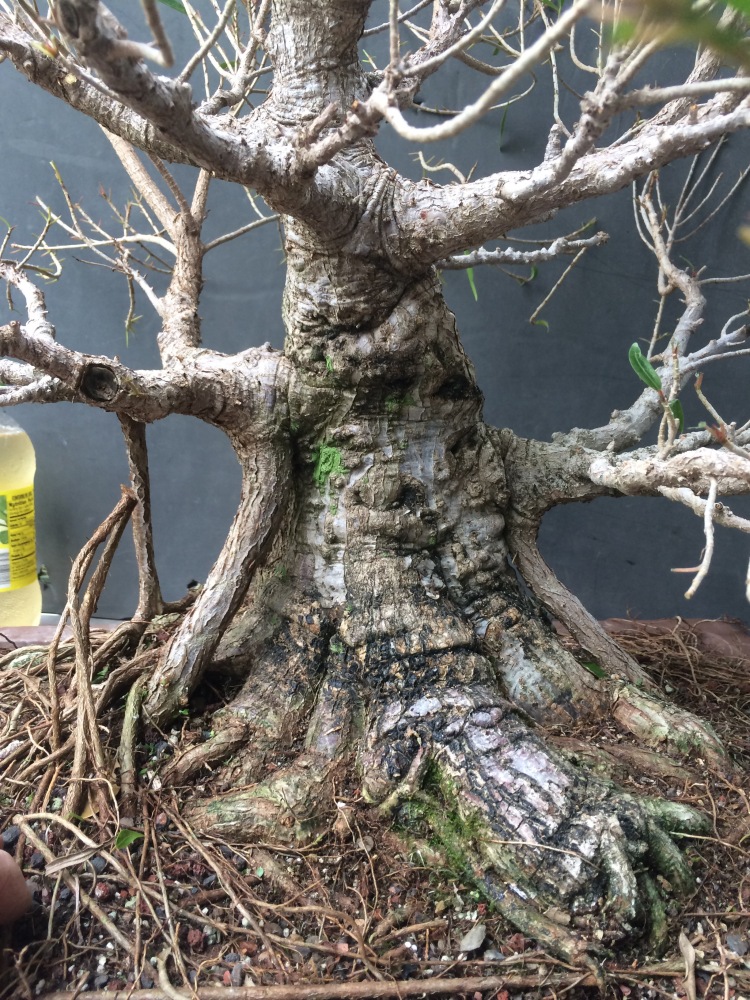 They do need some cleaning up though. 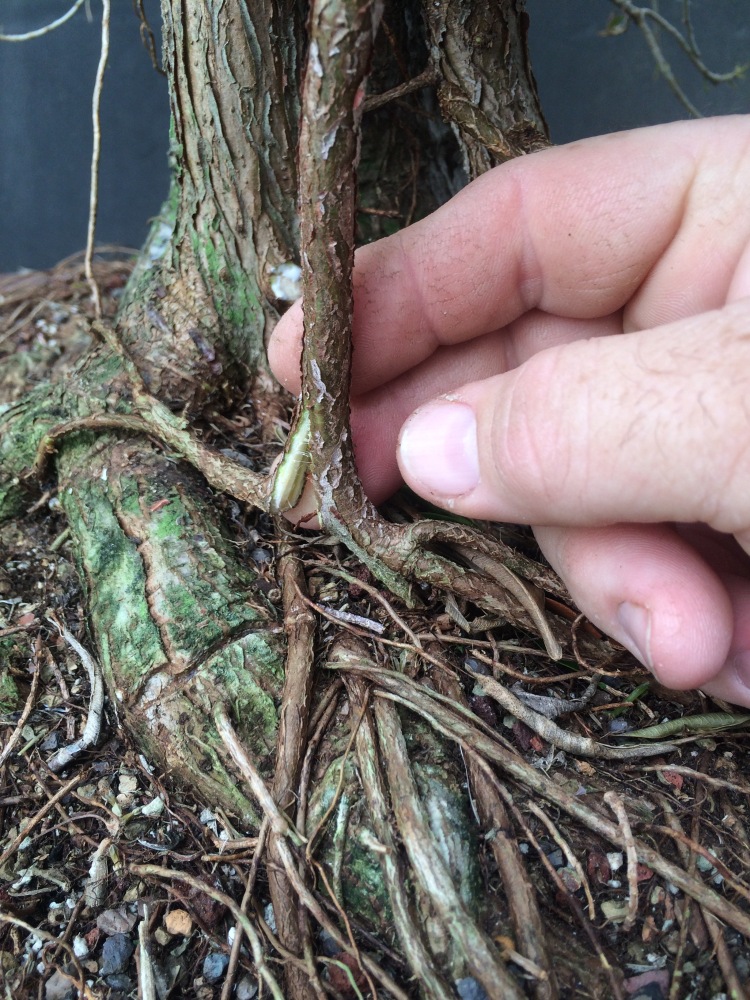 Next step: branch simplification. This tree is like the old question: “How do you eat an elephant?”

The answer? One bite at a time.

Some branch removal is easy to figure out-

Some not so much.

Normally you’d remove the ones growing up. But we can wire this to work for us. 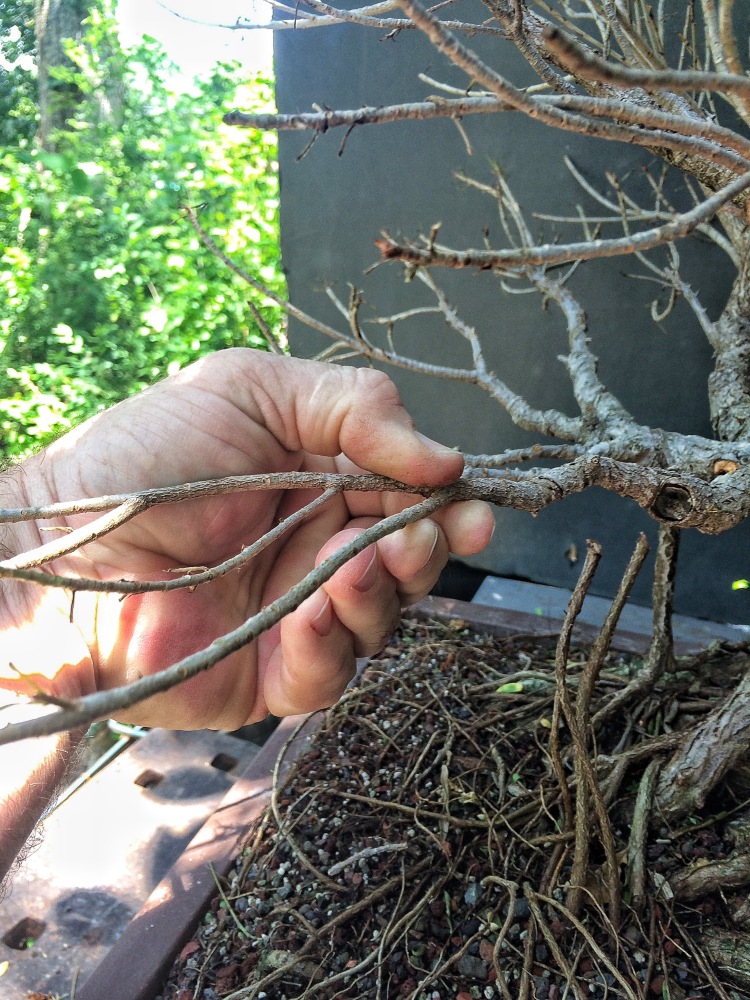 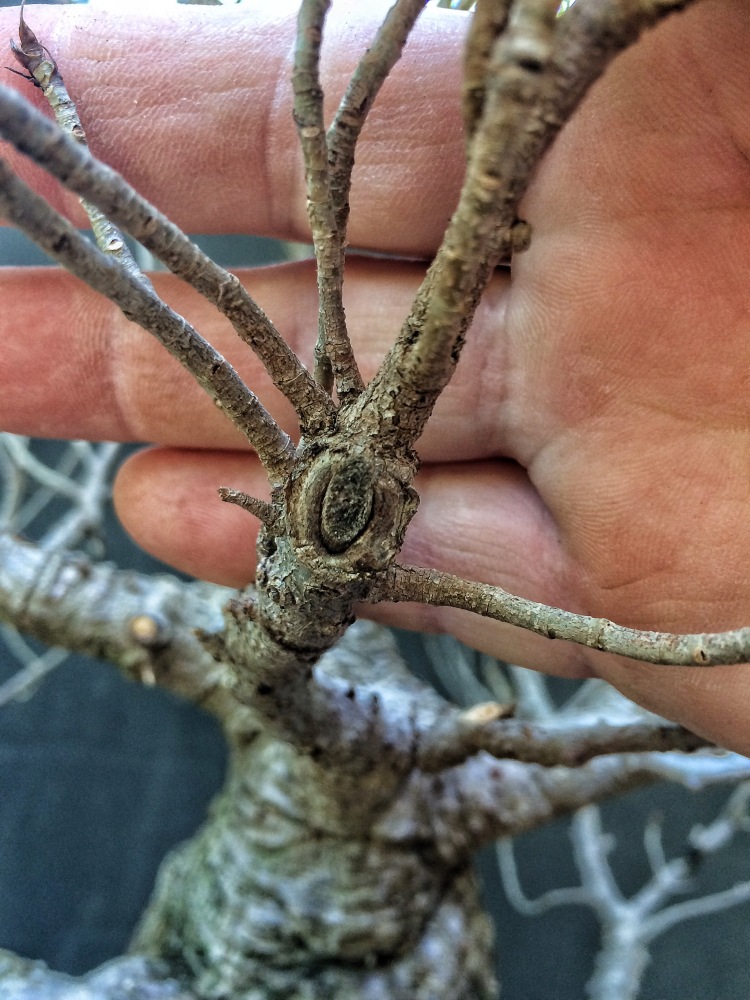 That’s all I can do until I repot. 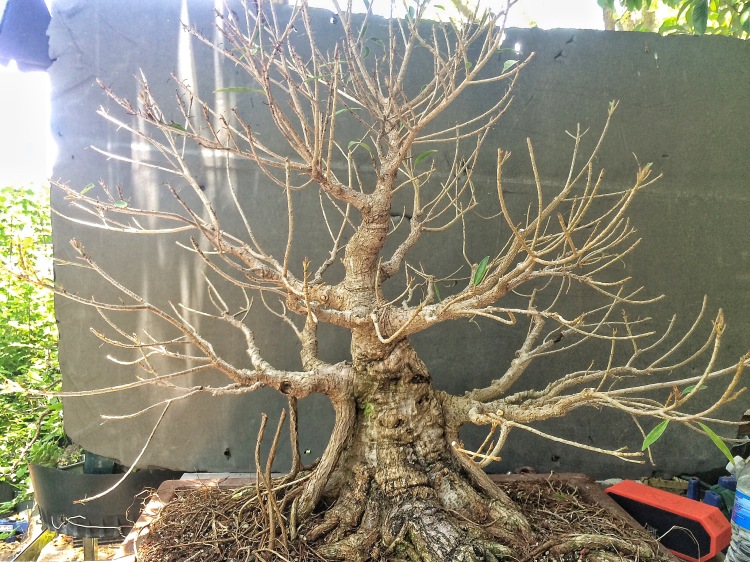 I’m saving the top for after I adjust the front and start wiring. 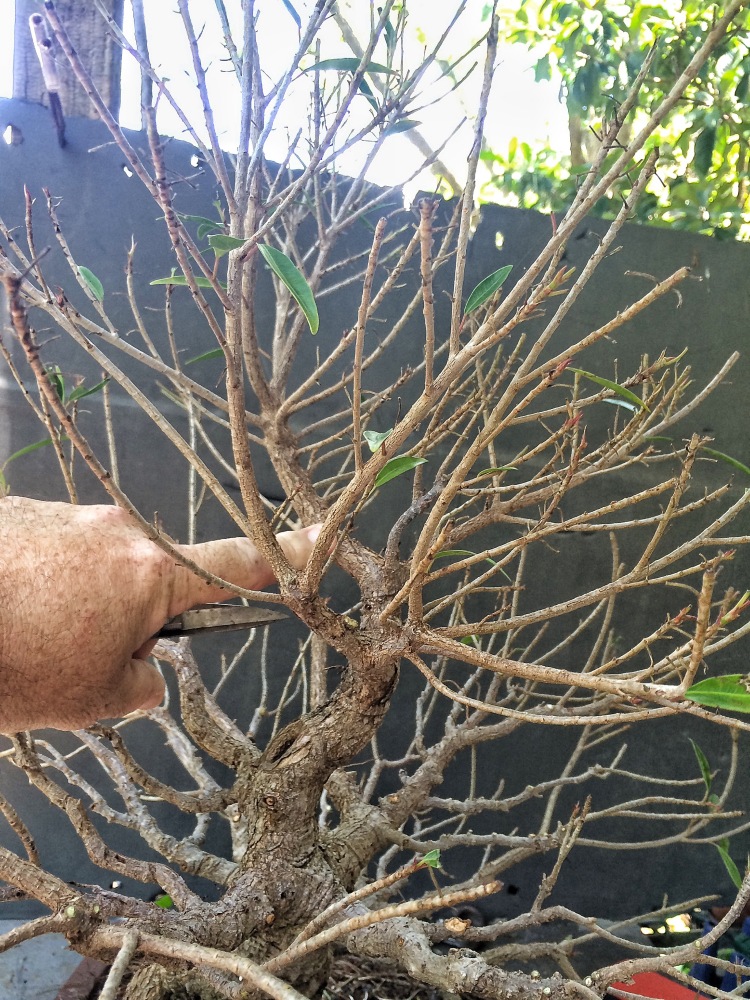 The dominant shoot is growing away and back. I’ll have to do some serious bending there.

But first, the repot. The roots are pushing the tree out of the pot.

It is only about an inch and a half deep.

To make less of a mess I usually do the work in a cement mixing tub.

Not that I’m not messy anyway. As you can see. But I still try.

Gently rake the roots out. 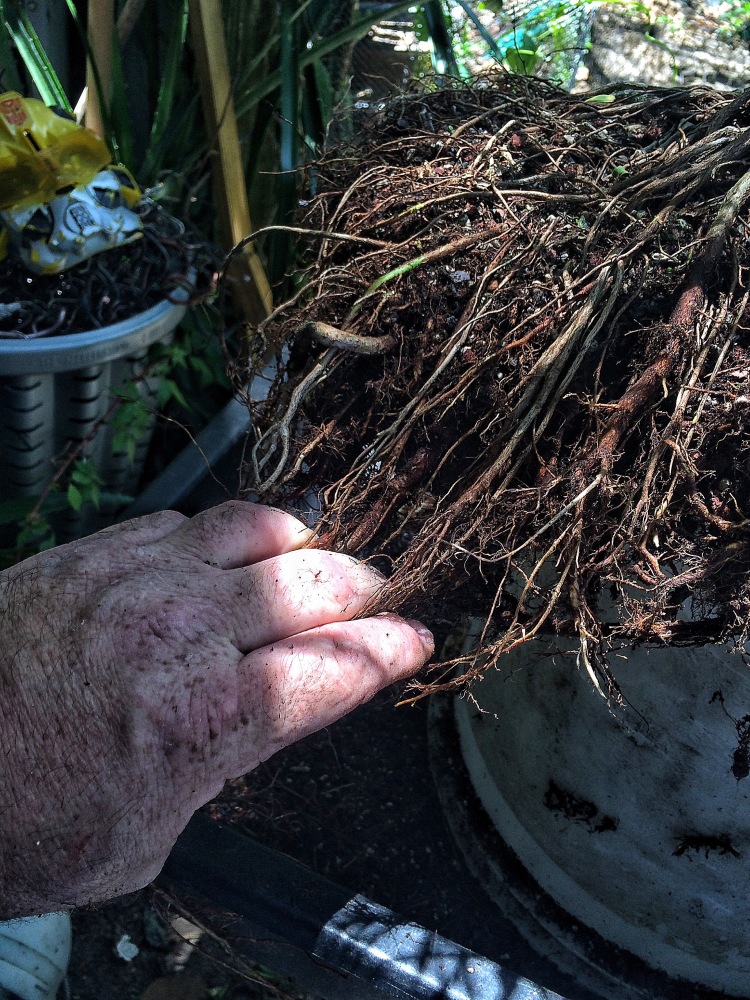 And remove the big ones. We want root division, the more roots ultimately, the healthier it will be. 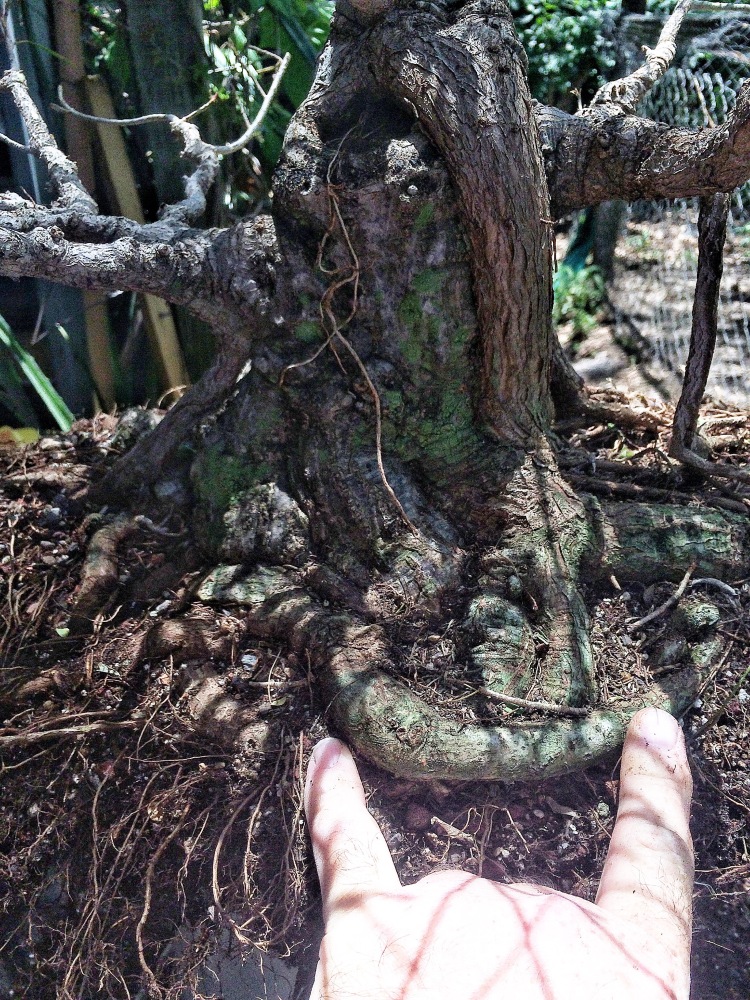 From each cut end there will emerge many new roots. Like a hydra. Cut one head off, two more emerge.

Yeah, I’ve been immersing myself in the MCU lately.

Cut the bottom roots for the same reason. 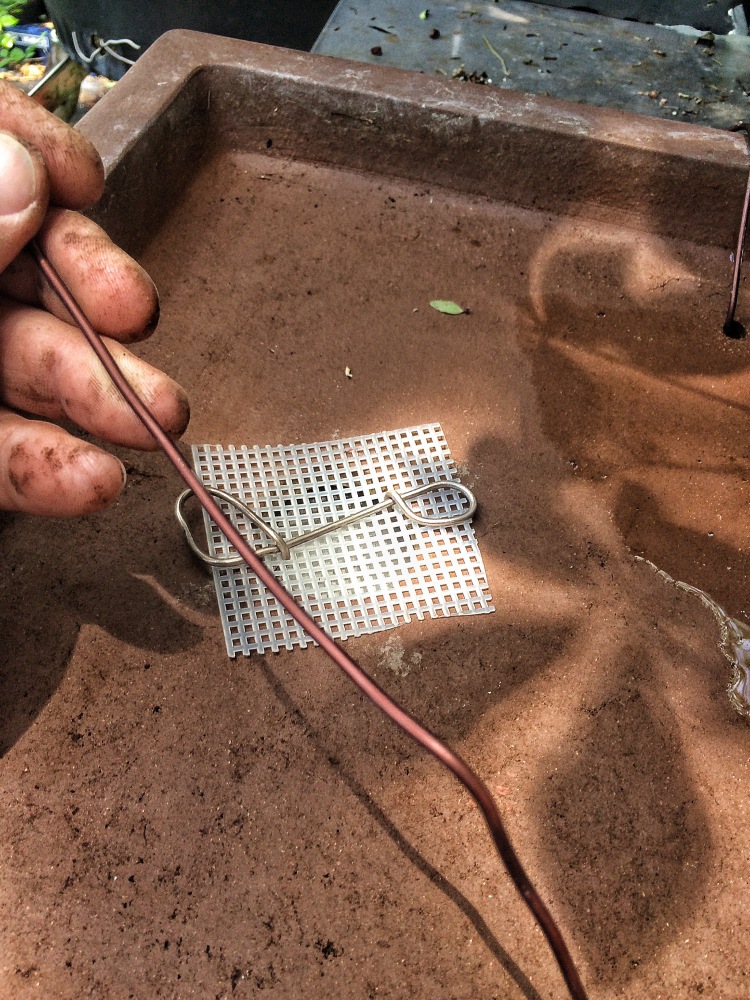 A cone of soil

And you push the tree onto the cone and wiggle it down. Wiggle wiggle wiggle! 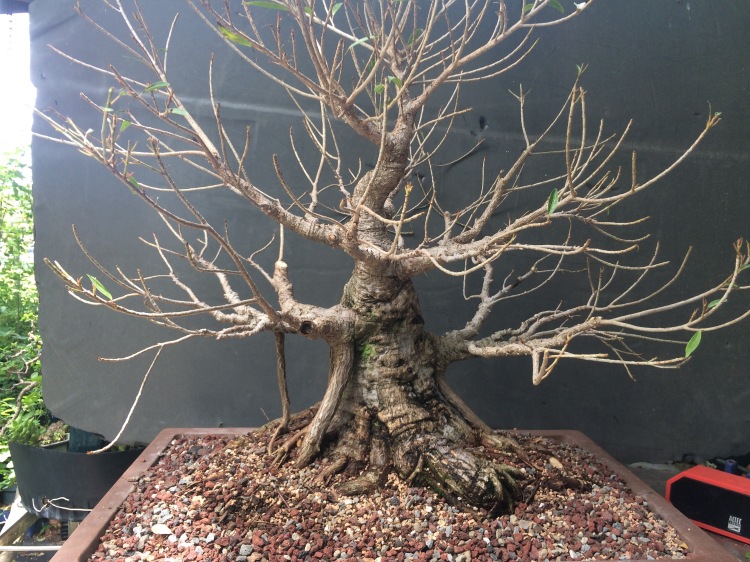 And chopstick it all in. 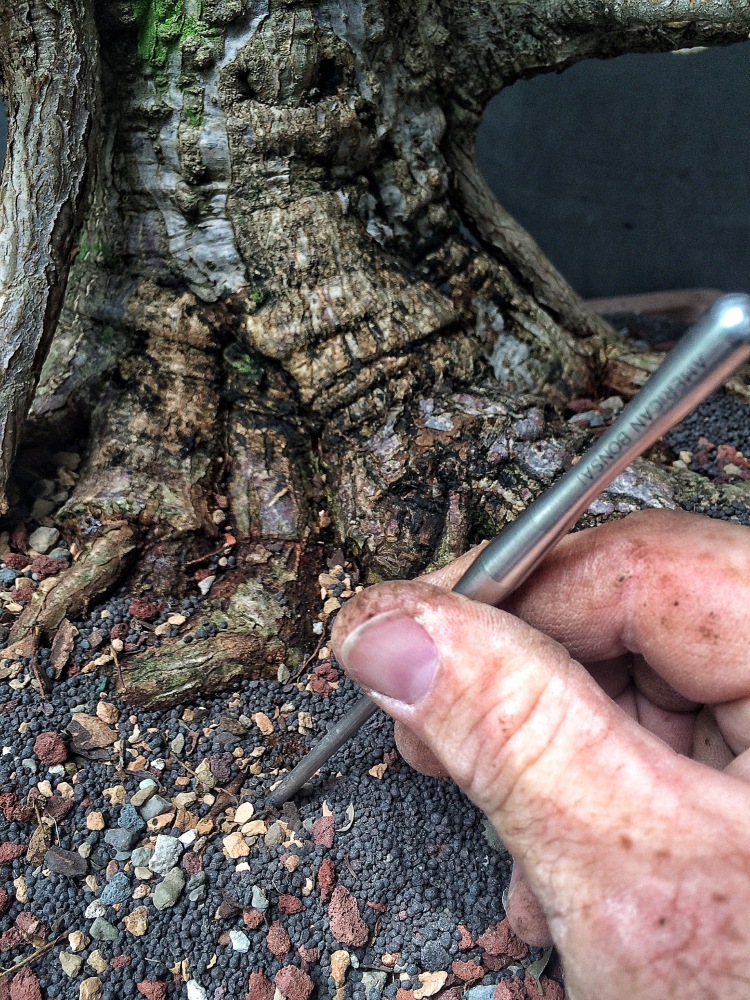 Now for the real fun. I need to bend the top…. 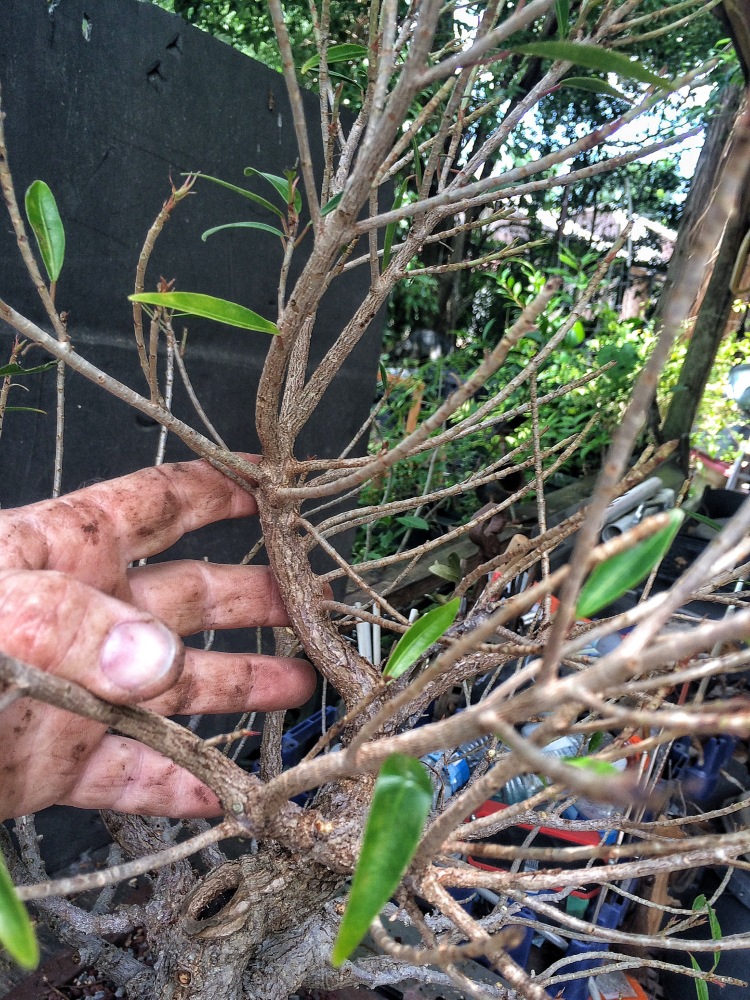 I tend to go from the bottom up. Some people teach to go from top to bottom. To each his own.

There’s a lot of branches. Now for the top. 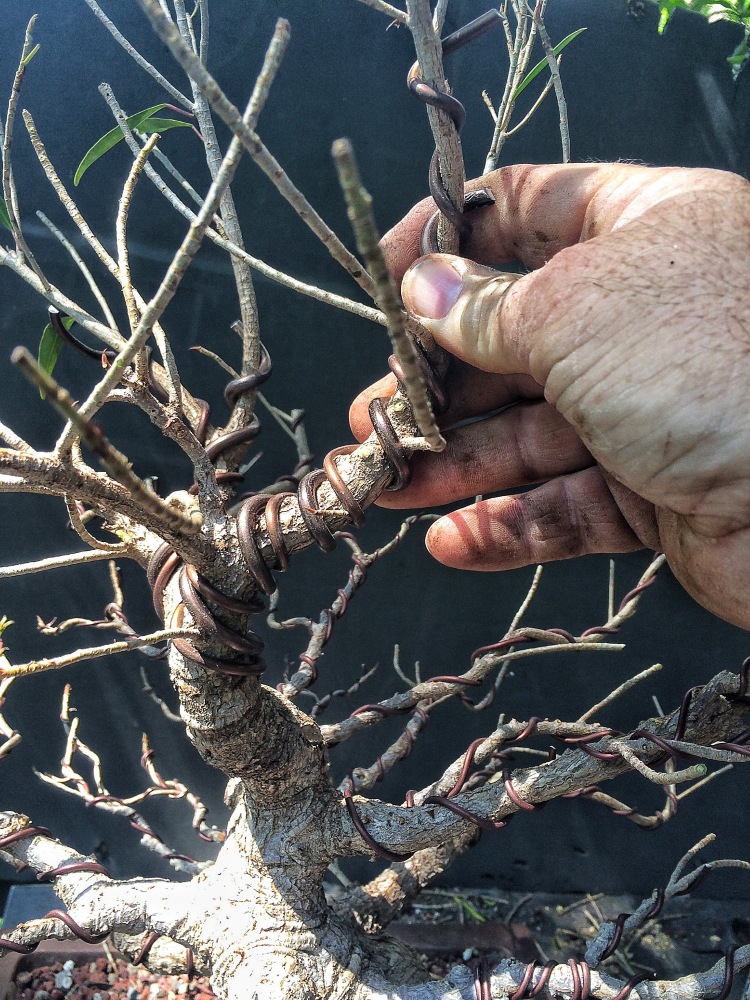 You’ll notice that I didn’t put the wire side by side and all pretty, like they say in the book. By spreading the wire out you actually reduce the possibility of snapping the branch. 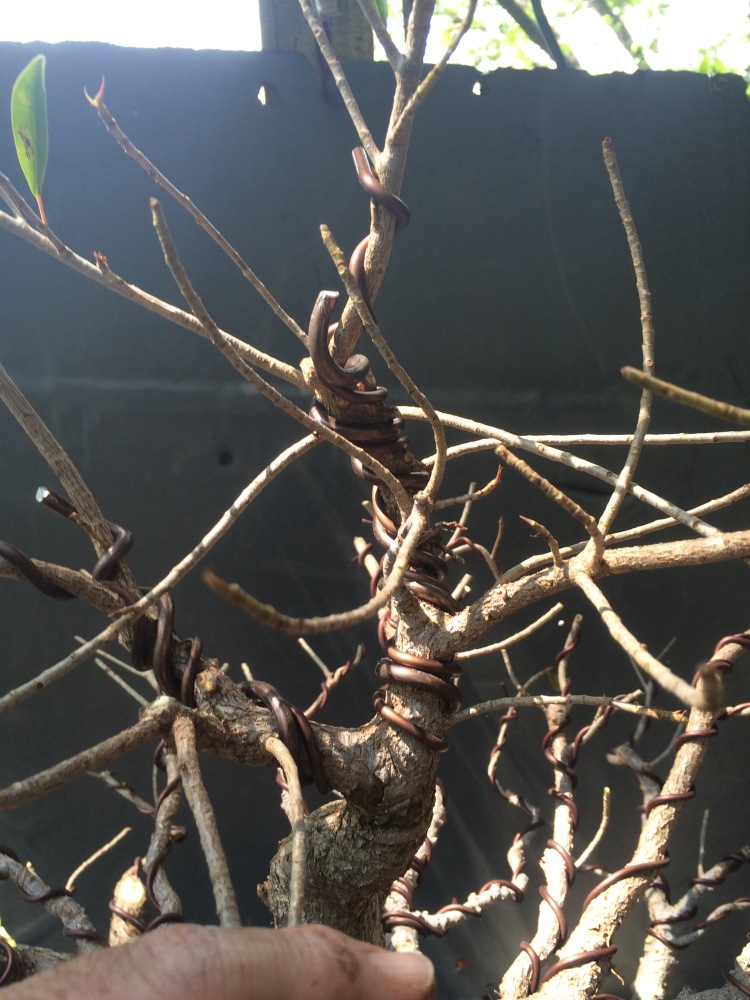 A few more wires and bends. 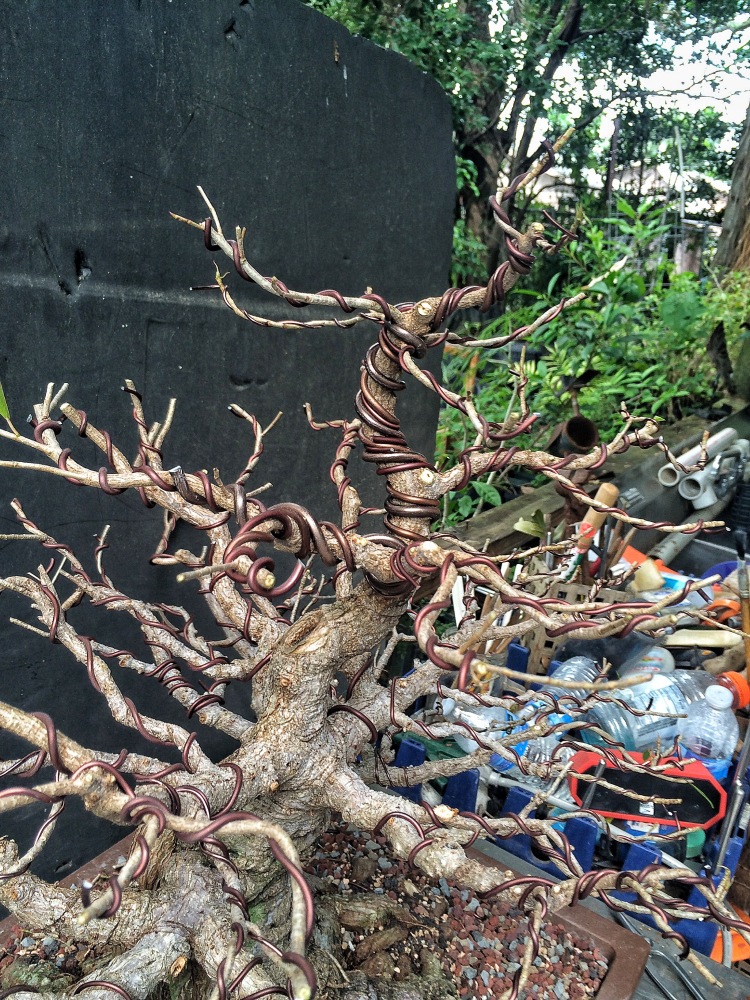 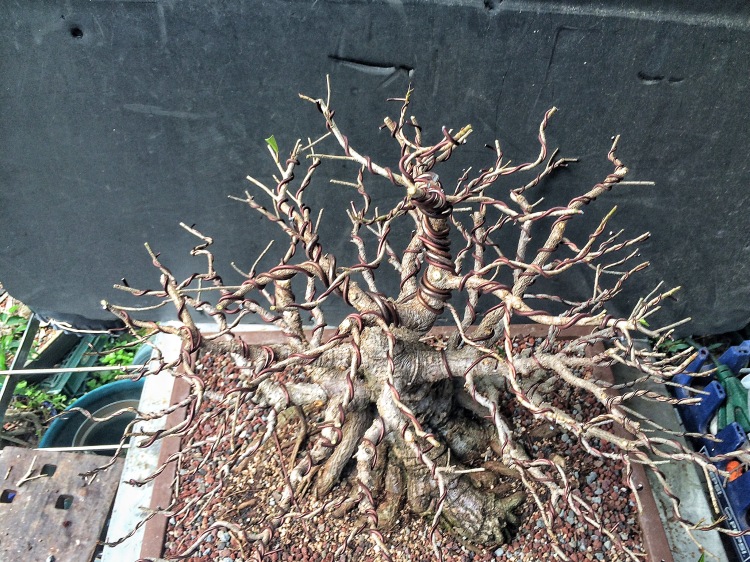 And, as I’m prone to say at this point, Bob’s your uncle!

Here’s the before,  for self edification purposes:

But there’s one more branch that’s needs some wire. 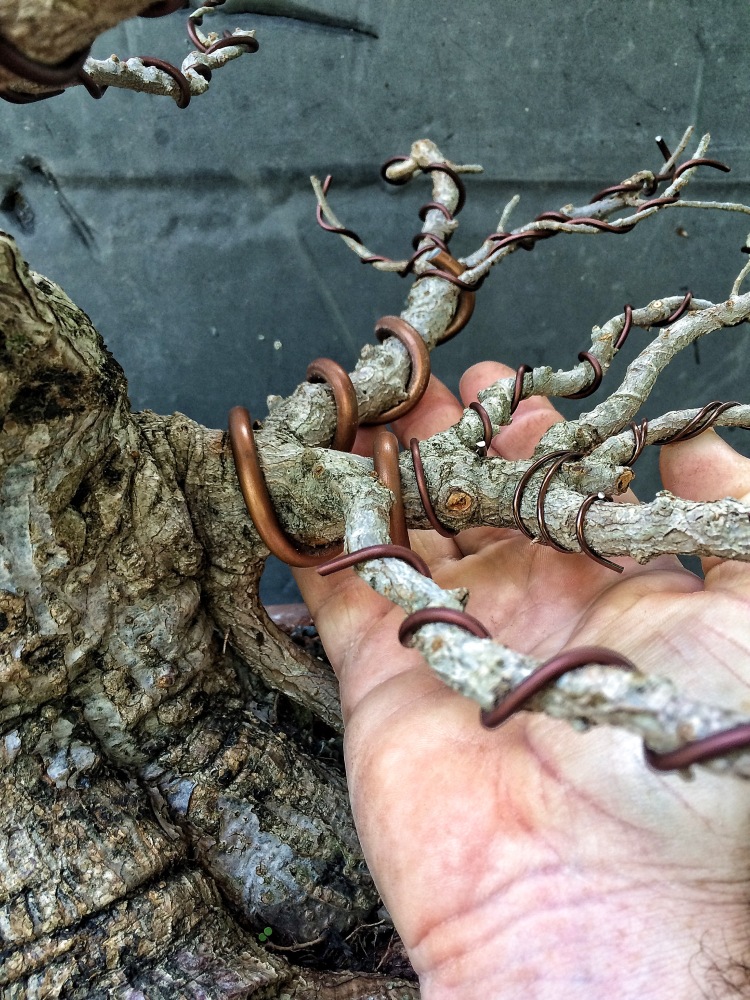 I’m going to try to write one more blogpost this week on the trees from the Bsf/Epcot exhibit, but if I don’t it’s because I’m scrambling to get ready for the Bsf convention. 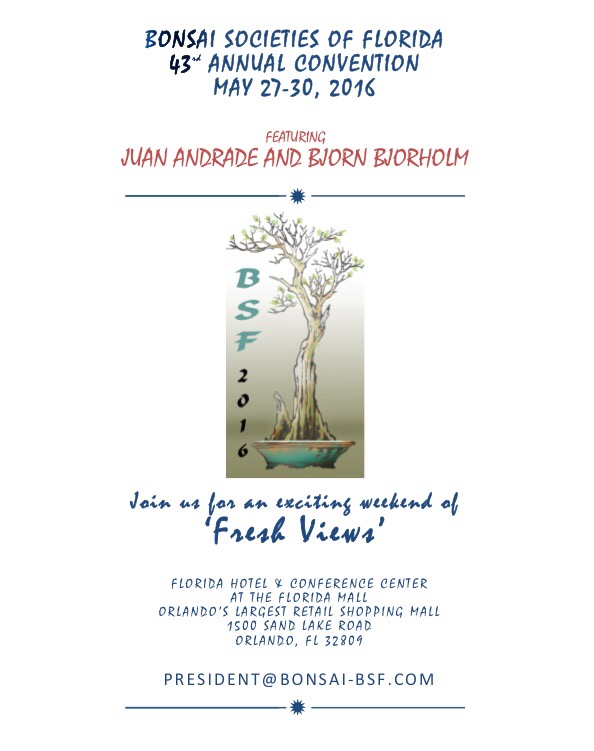 I will be vending (my wife will be manning my booth. Don’t tell her about the hairy leg joke) as well as leading two workshops and performing a duelling demo alongside Bjorn Bjorholm. I expect to win. Go to www.bonsai-Bsf.com for full details.