I made a stop at a friends house after a soil program I presented to the Bonsai Society of Brevard (a PowerPoint program based on This Post. I was literally dishing the dirt on bonsai culture…hyuk hyuk). He’s trying to raise money for a mission trip and asked if I was interested in some trees. He has some quality material and I wish I had had more money to help him out, but I was able to pick up some fantastic material. One of those trees is this wild willow leaf ficus.

When I said wild, I meant it. It’s busting out of the pot. Here’s a contrast, side by side, with one of my trees.

My friend, who goes by the name of  Donnie (it may be an alias, he seems like the spy type to me, or a superhero) had come upon the realization that he wants to be more of a bonsai artist and less of a farmer. This epiphany hit him after a talk a prominent bonsai professional gave at his club. And add that and to the fact that Donnie just has too many trees to keep up with and it was like an anvil dropping. And so, like a vulture, in sweeps Adam, to help him weed out (literally and figuratively) the wheat from the chaff.

There comes a point when you just don’t have time to develop every tree you have to it’s full potential. 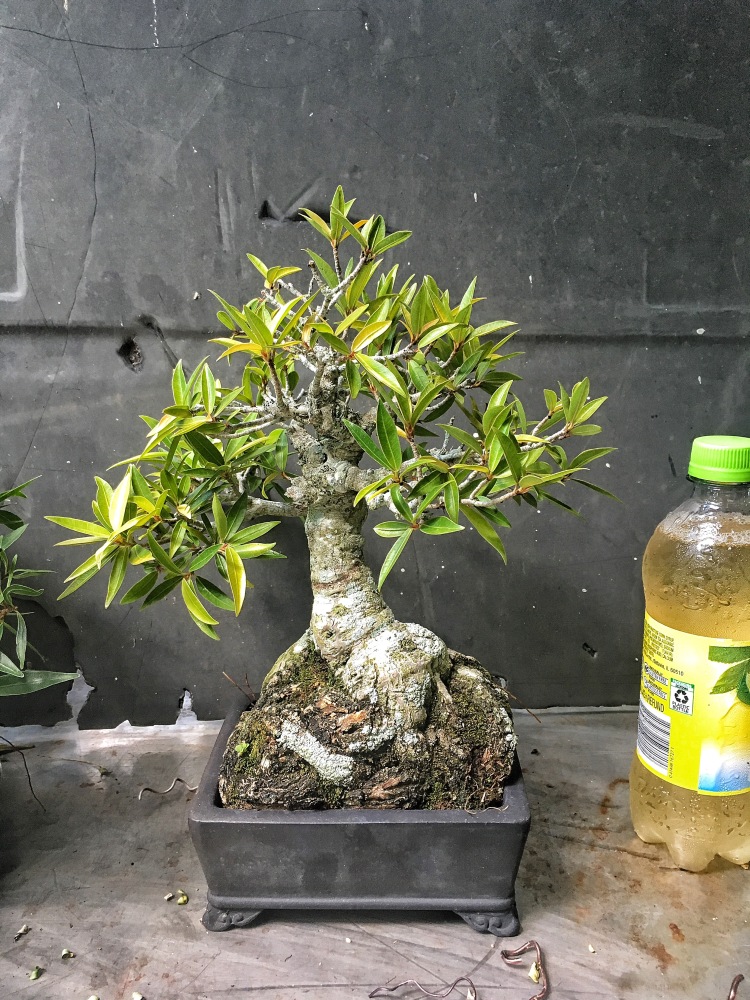 It might be because you have better ones that hold your interest (this one has great potential, you’ll see. Right now, it’s just on the verge), or maybe you have too many of one species or whatever (maybe you just fell in love with the snakes….). 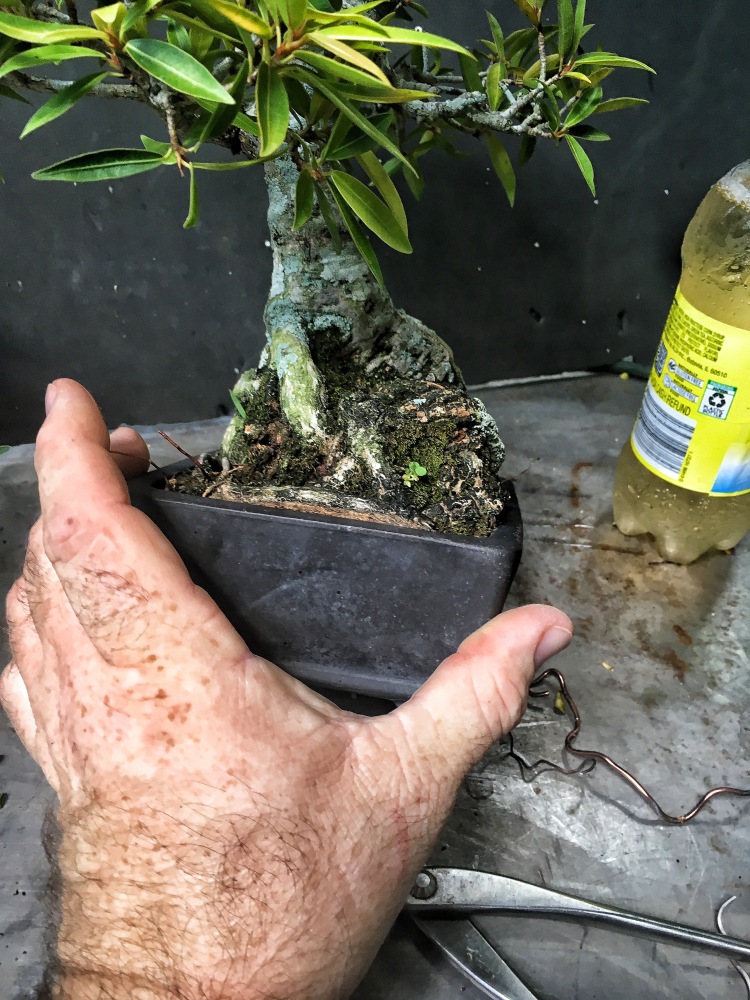 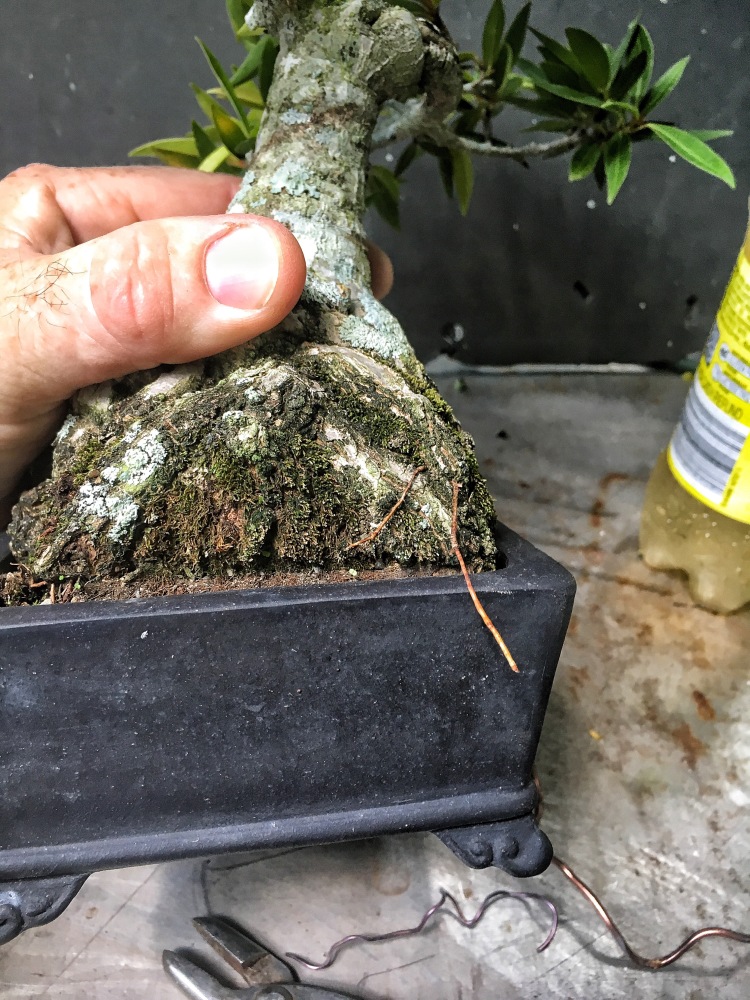 Donnie probably has about ten trees like this, all with amazing bones and great futures but then again,  he has ten more that he likes better, and they show it. Better pots, more time spent wiring and pruning and fertilizing. There just comes a time when you need to stop buying new stuff and make your collection into a small number of great trees instead of a large number of mediocre ones. Sell them off, donate them to your club, give them to beginners. Can you imagine if you had started with an old tree that just needed some attention instead of the sticks in pots you started with? This tree started as a stick in a pot from Jim Smith’s nursery or maybe Old Florida Bonsai or maybe even from me.

Before I begin, let’s address something that I’m sure at least one person will point out. The leaf color.

I’m sure you noticed my trees green-ness compared to this one. 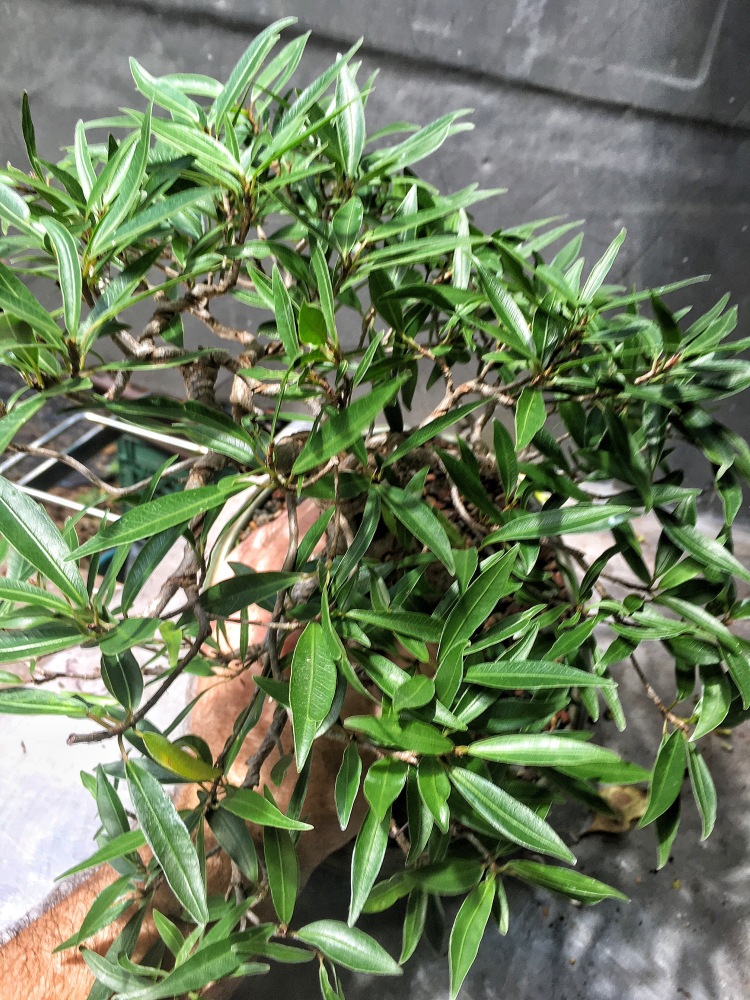 It’s generally not a good thing to torture a tree, the way I will be torturing it soon, if it’s not healthy. Even though it seems more yellow, it’s actually pretty healthy, trying to escape the pot notwithstanding. Willow leafs go through a moulting period, which happens at slightly different times for each individual tree. Mine has just done it sooner than this one and, therefore, had greener leaves than this one. The bronze color is just what new growth on a ficus salicaria looks like.

Generously, it’s selectively pruned most of the unneeded growth out for me, too.

Whereas on mine, I’ve kept it pruned out pretty well (if one cannot use the word “whereas” properly in a sentence, one should not be writing)

Looking at the roots…. 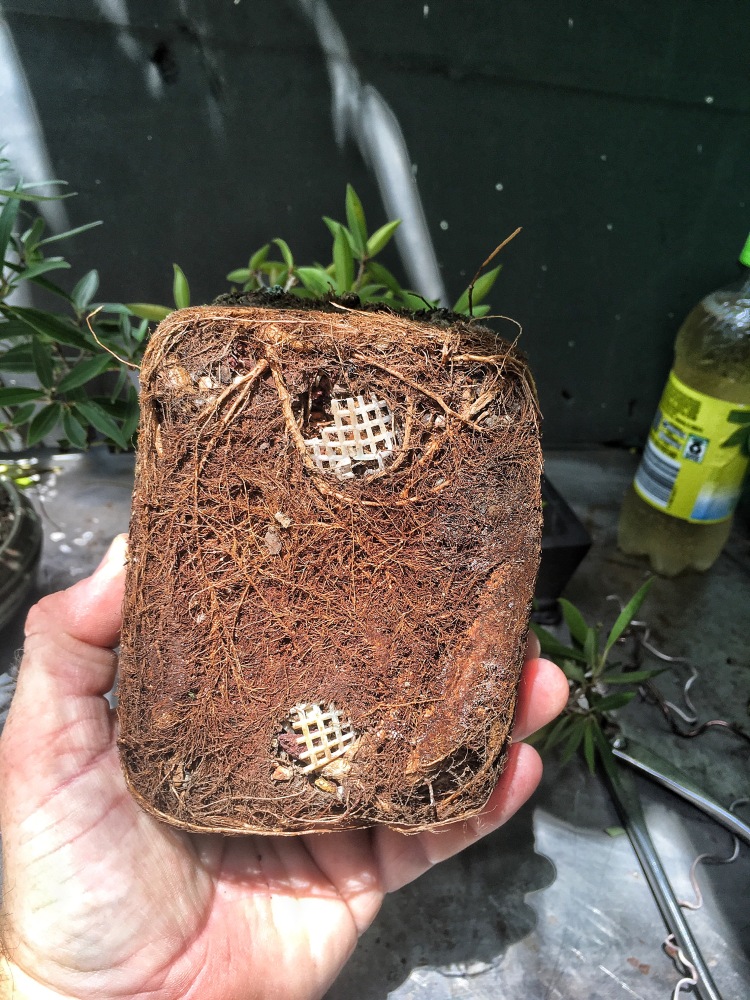 ….tells us that it’s probably time to repot. I know, the sky is blue too.

Now, it seems counterintuitive but a fig getting this root bound isn’t too bad a thing to let happen. Sometimes neglect is the best thing for a ficus, when developing it as a bonsai. This tree would never have gotten to this level of wildness and awesomeness  without its un-molested time in a pot. 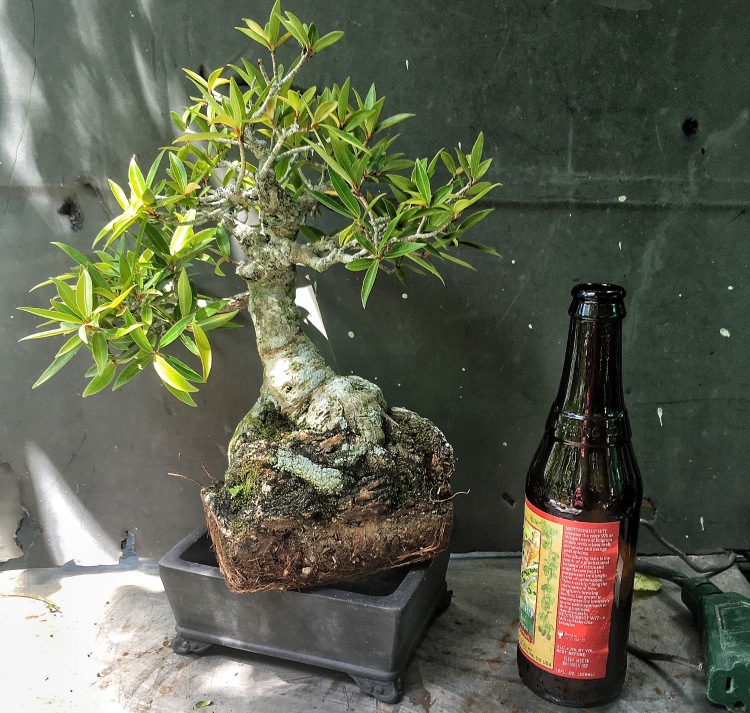 Continuing…..Uh oh. You see I’ve switched from the green tea to the beer. What does that mean? I don’t know.

Now, to contrast again, this tree….

….was in a similar state when I found it. Ready for refinement. Or wiring. Or a trunk chop. 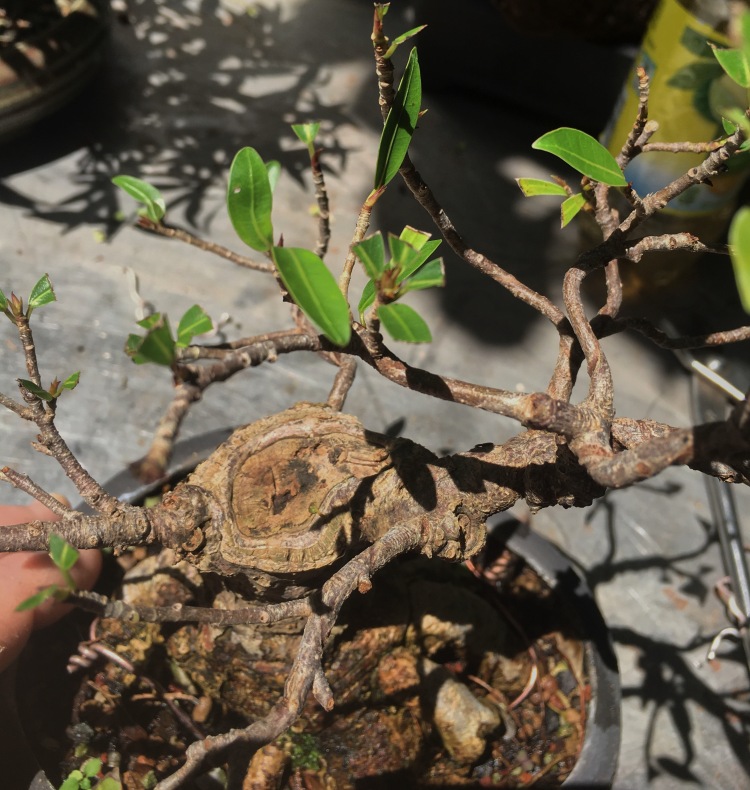 You see I chose the trunk chop. 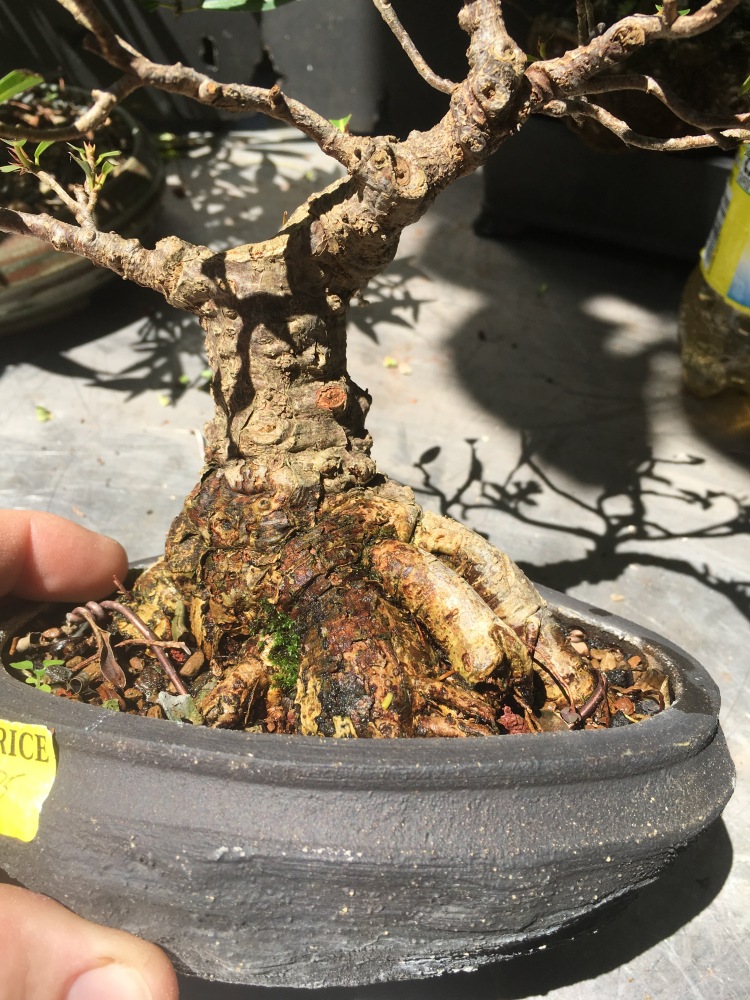 It needed to fit into the pot after all.

But I think I’ll be a little more kind with today’s tree. At least on the top. So, putting those other trees to the side for now…..

……let us, finally, begin then, shall we? The first step, always, is figuring out the front. This is done at the roots, generally.

Deciding what roots need to come off because they might be crossing….

Or a just ugly. 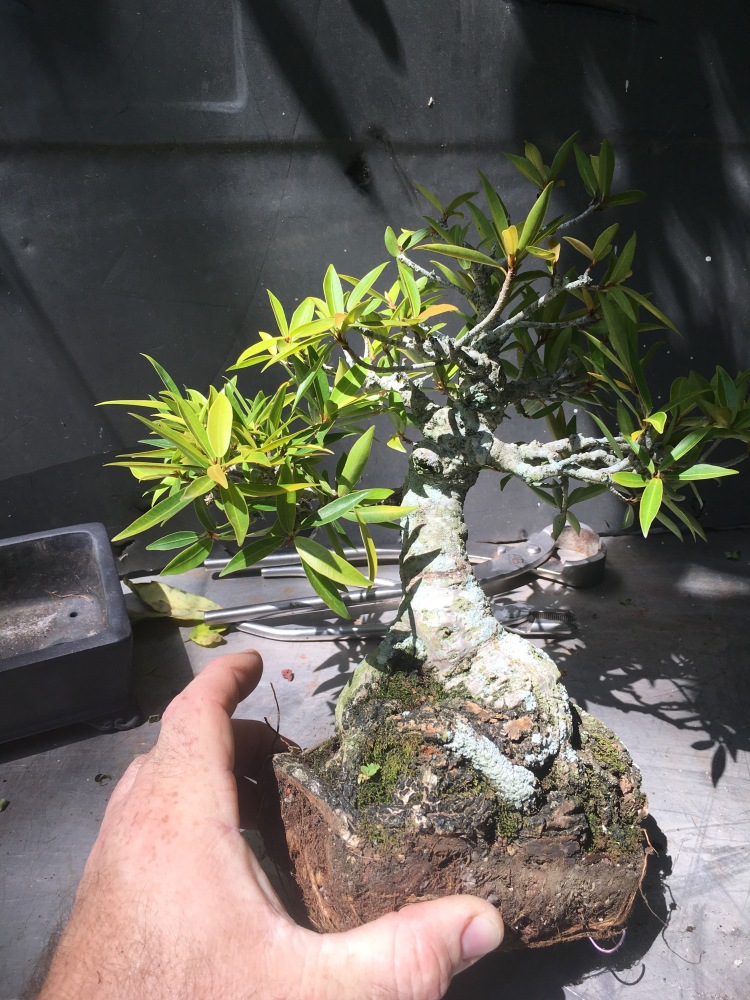 Or are maybe too high up on the trunk.

It’ll help to see them better if I clean up the roots and trunk with a brush and some water.

I’m not liken’ the lichen.

The trunk is actually red.

I can see what’s there now.

I could just do the old hack and saw number on it. 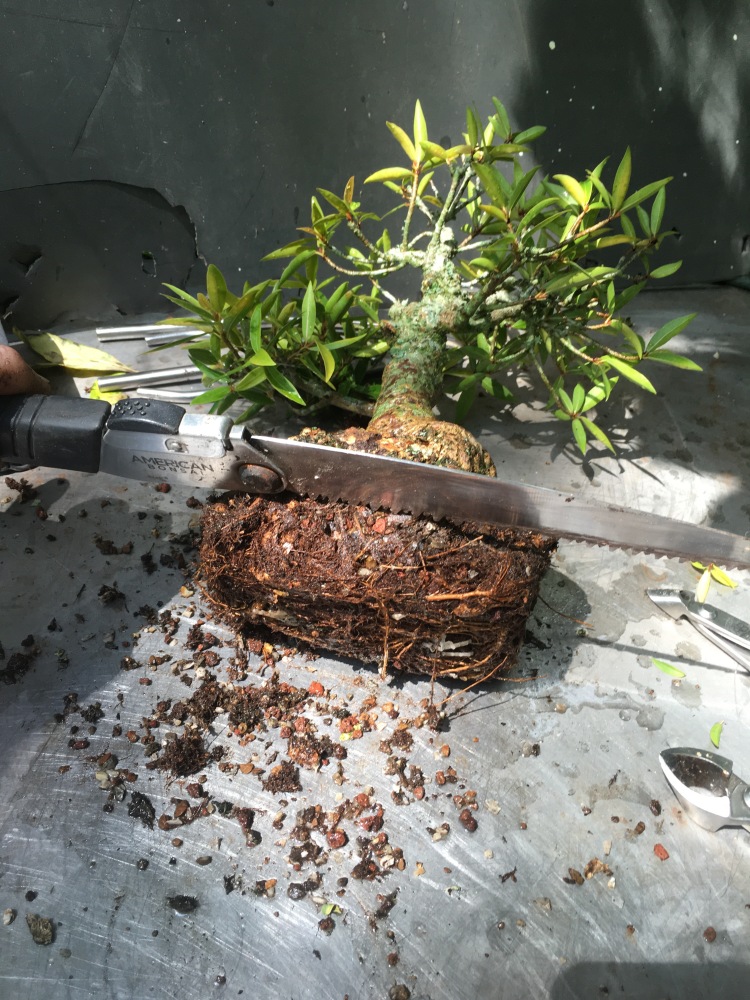 But I usually don’t. I tend to be a little more precise in my hack jobs.

The idea is to get rid of any downward pointing roots by pruning like this…. 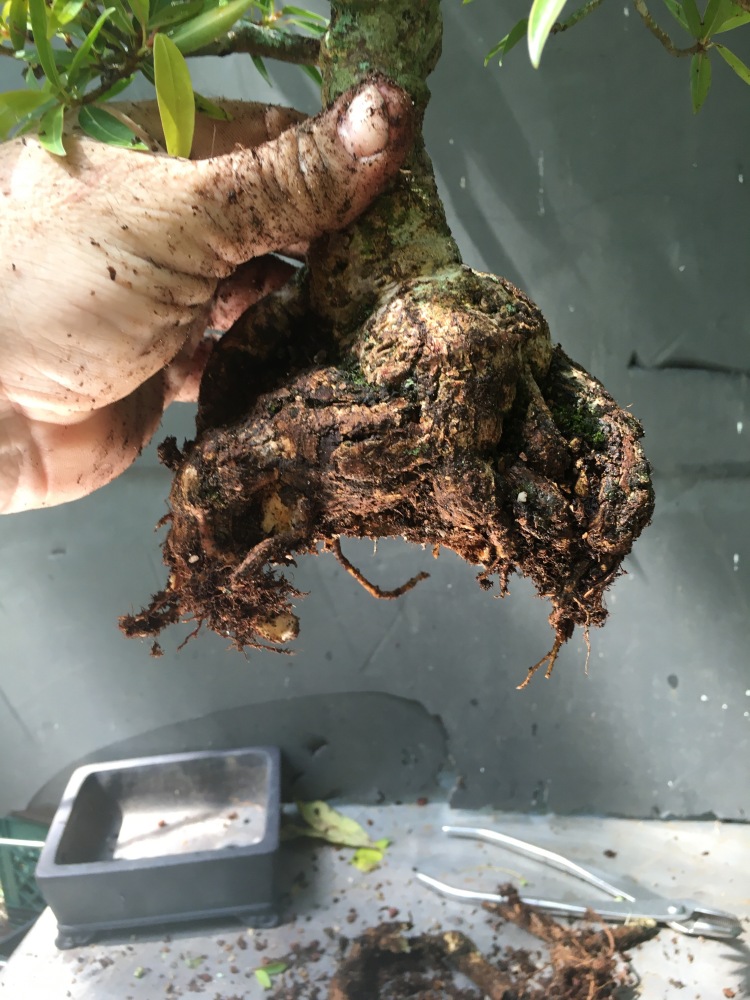 I’ve chosen this amazingly perfect  pot from Bellotta Enterprises out of Jacksonville FL.

I think it contrasts nicely with the wildness the ficus exudes.

For it to fit though, I’ll need to cut the roots just a bit more.

And I think this high root….

Even though it contributes to the overall width of the root spread, just doesn’t go with the movement. 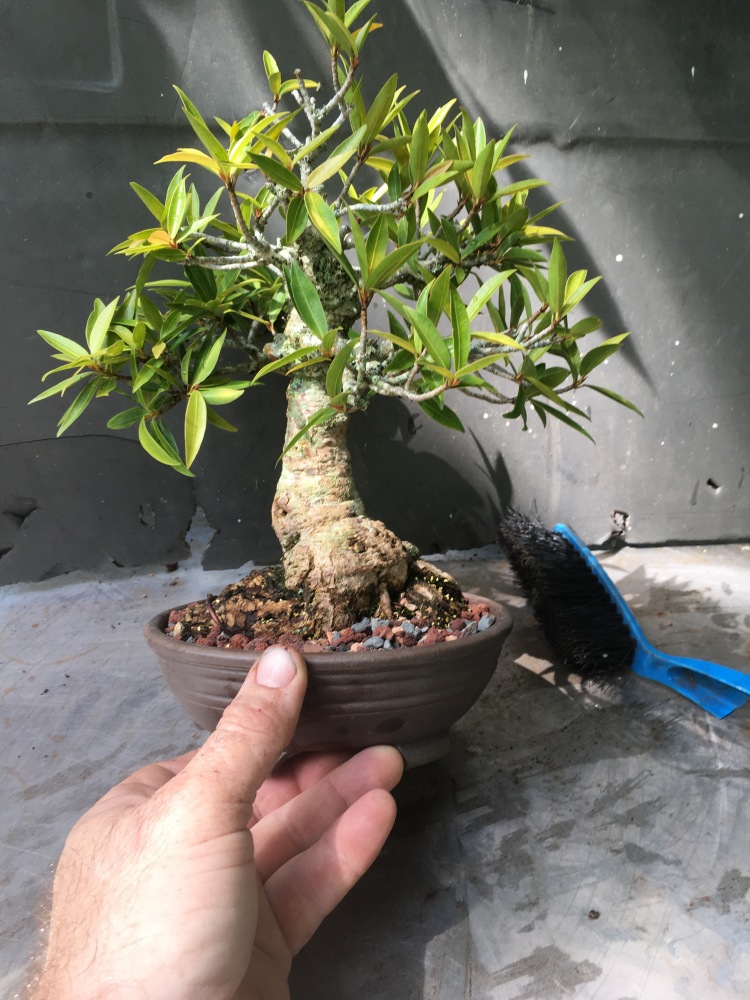 Aha! A curve when there wasn’t one before.

There we go, I’m starting to tame it.

One up high. The branch is too thick for being so high in the tree. 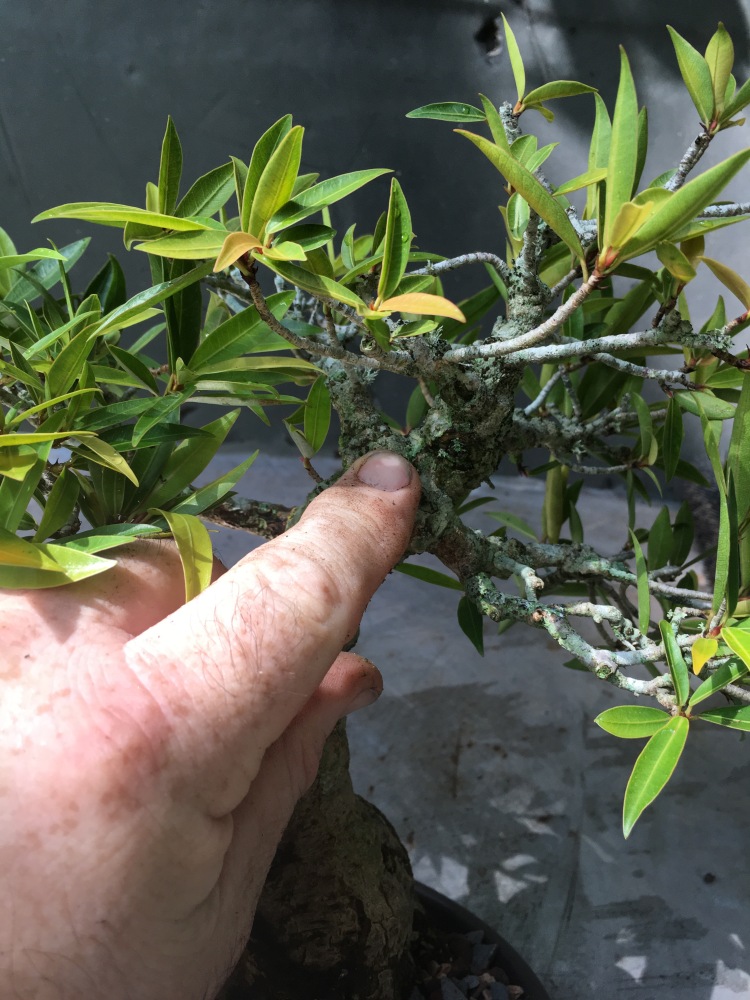 Yup, the first branch. Because it’s bent at an awkward angle. 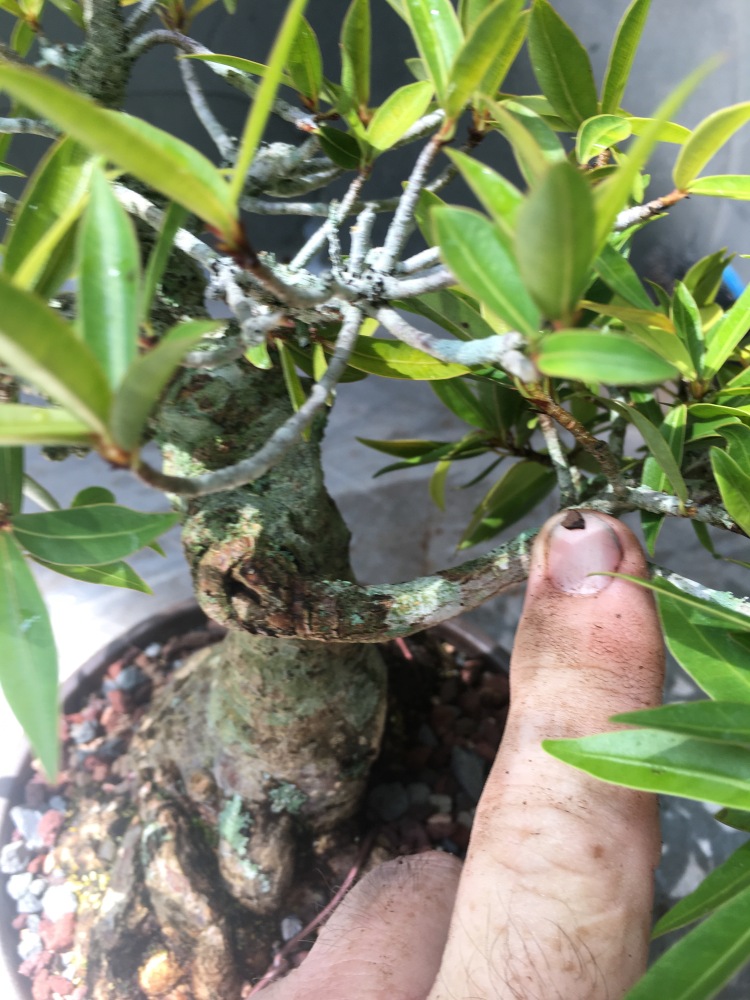 It’s bent around almost to the front. 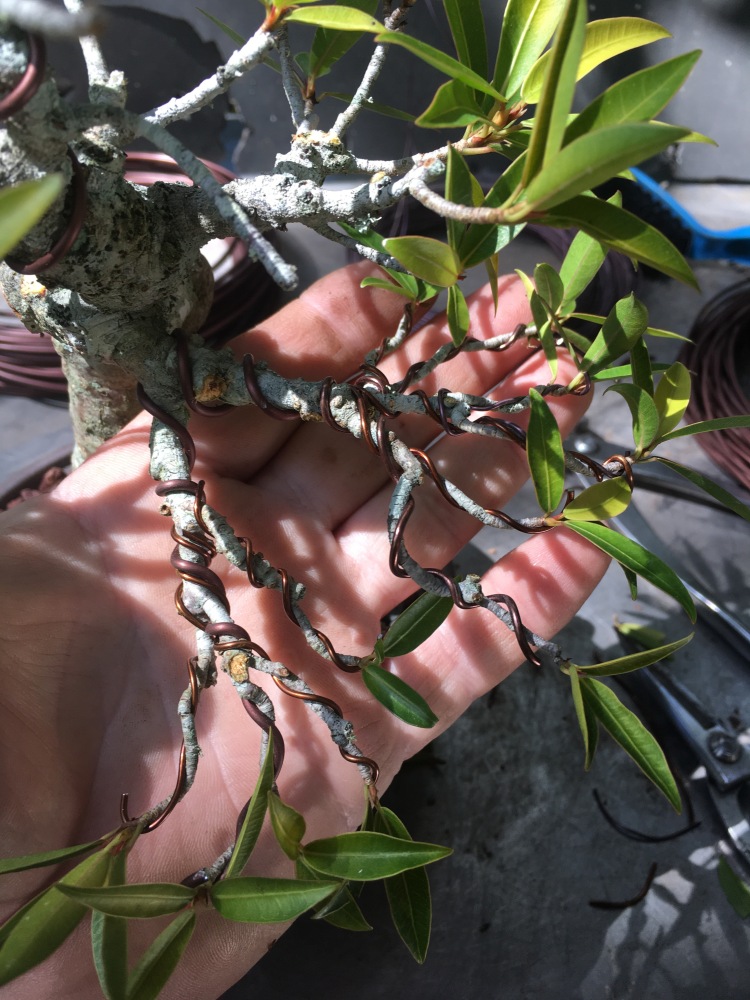 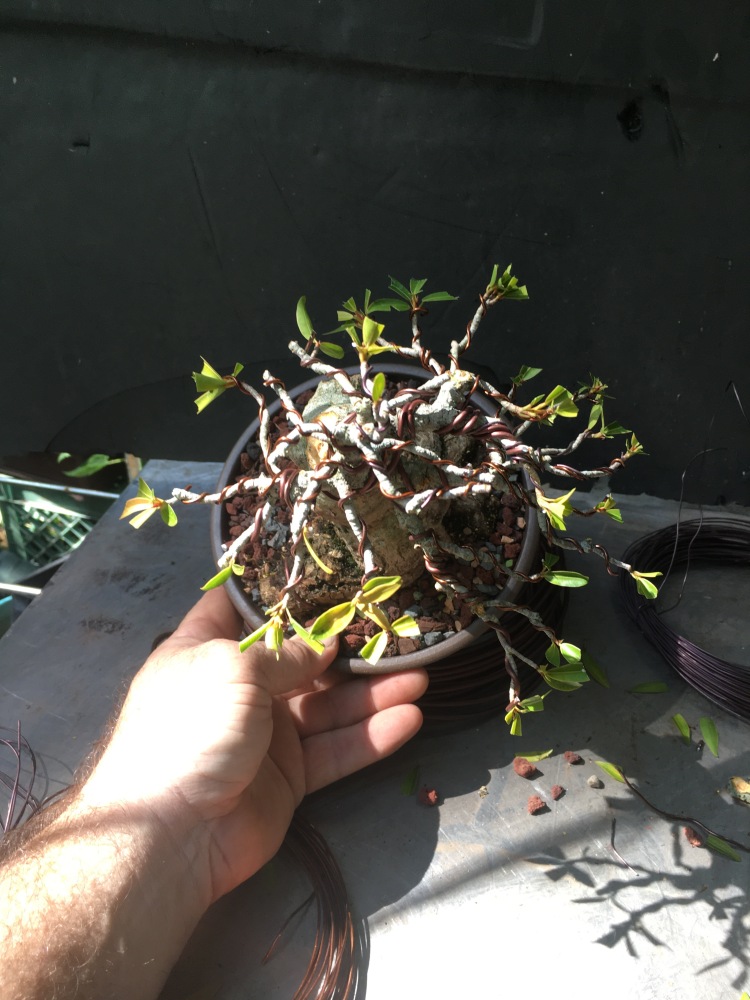 This is a redesign, so the idea with the branch placement is to open it up, get the sun inside the branching, make sure no branch is on top of another. 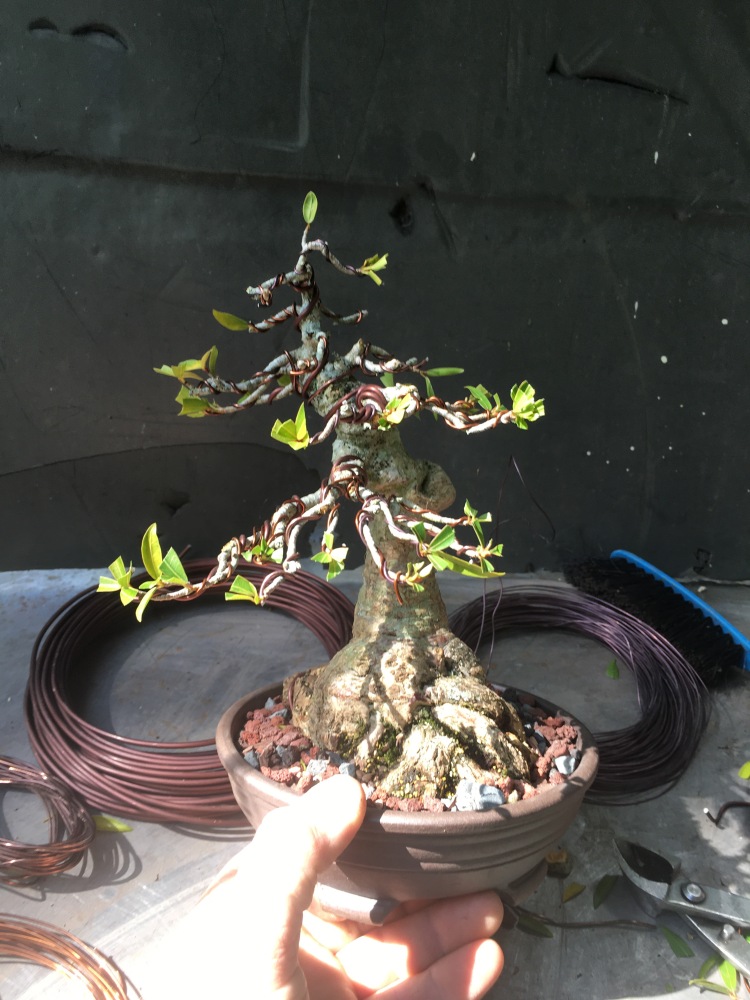 Looking a bit more refined. Like a troll in a tux, kinda. 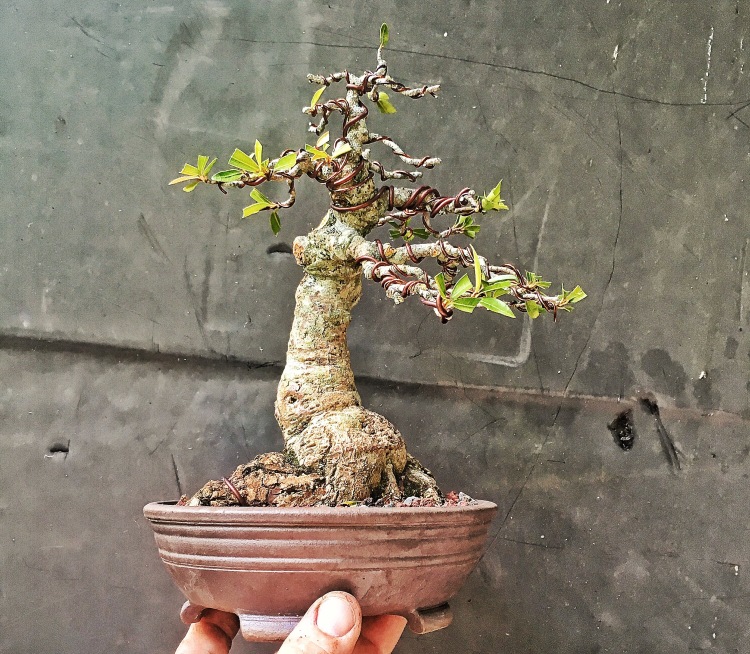 Mostly. The root spread is best from this angle. Looking at the other views, it almost looks good from every position. That’s the goal, really, a three dimensional tree. And that’s why it’s in a round pot.

Thank you Donnie, I’ll be back for more soon.