You remember this tree?

It made an appearance earlier this year in a post called Time of the Ficus, in which I not only gave a pretty good breakdown of wiring using proper anchors but also presented a thoughtful essay on the idea of defoliation as a horticultural technique in bonsai. Got in trouble for that last bit. Oops. 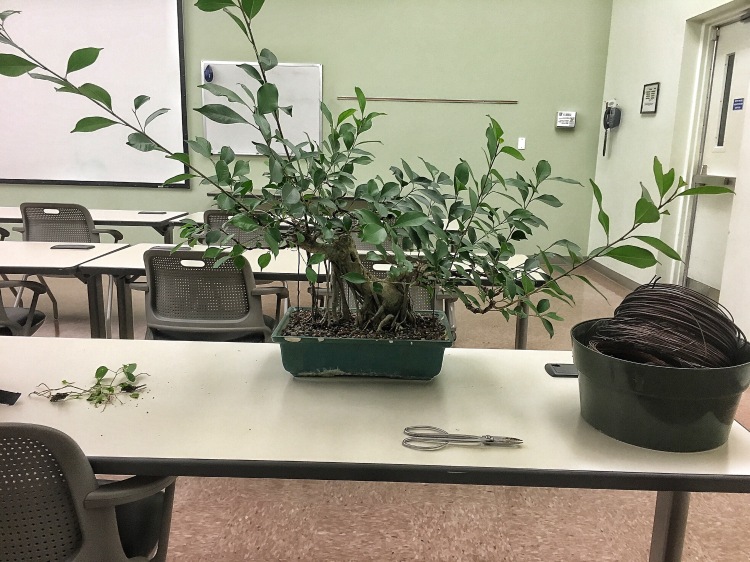 Anyway, I’ve let this one grow since then. As you can see.

First lesson: if’n you want trees to grow, fertilize. If you want fast fertilizer uptake and quick growth, use synthetic. If you want to control the growth more, and be able to keep up with it, go organic.

If you have a ficus and it’s summer and the rainy season in Florida, all you need to do is waft the smell of fresh turned dung in its direction- it will grow. Truly, there’s no such thing as dwarfing a ficus, it’s a battle, an epic war, to beat a ficus into shape. I’ve seen a branch move upwards with even when wired with #3 wire. Granted, one can topiary trim a ficus into shape, much as you can any bush, like a juniper or such, but to really develop the branch structure for a great tree, you gotta be on top of it like nuts on a boar hog. Like flatus in a vegan commune. Like a beard and irony on a hipster. Like……you get the idea.

I got some needed branching. 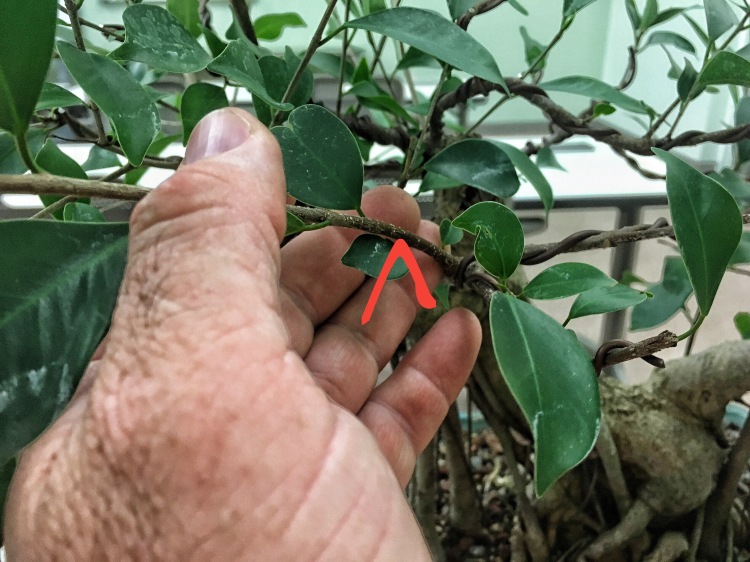 The wire cut in in some places it grew so quickly.

But that doesn’t bother me so much. You really have to let the wire dig in to set the branches. And, with a ficus, those scars heal pretty quickly. Not to worry.

I did get more new growth than I wanted.

Which is easy to remedy with some scissors.

And I got not one, but two branches right where I needed them. 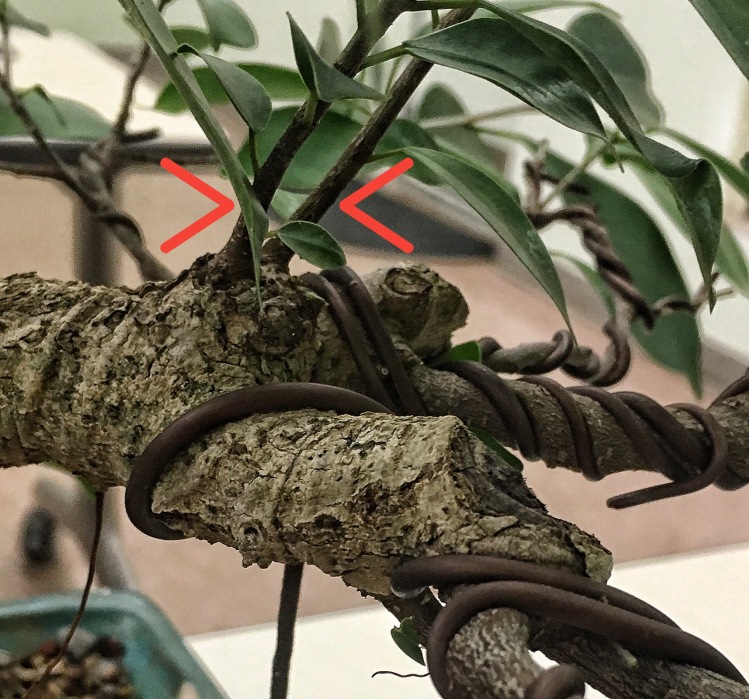 Here’s the tree before defoliation and after some selective pruning.

You may have noticed that in not in my usual work place. I’m at the Central Florida Bonsai Club meeting. And I have some help (and some hecklers too).

First step tonight is to defoliate. My technique is to use scissors to cut the leaves off and to leave the petiole intact.

The petiole is basically the leaf stem.

My first helper is my daughter. I dragged her here to get her out of the house. She’s addicted to YouTube and I thought some human interaction might be good for her.

She is literally saying “Don’t take my picture!”

A new CFBC member is helping too, Joel.

Between the two of them they were done before I could even sit down.

Next is to take the wire off.

I showed my daughter how to use the pliers to remove the heavier wire.

And left her at it while I shot the shit with Guaracha. 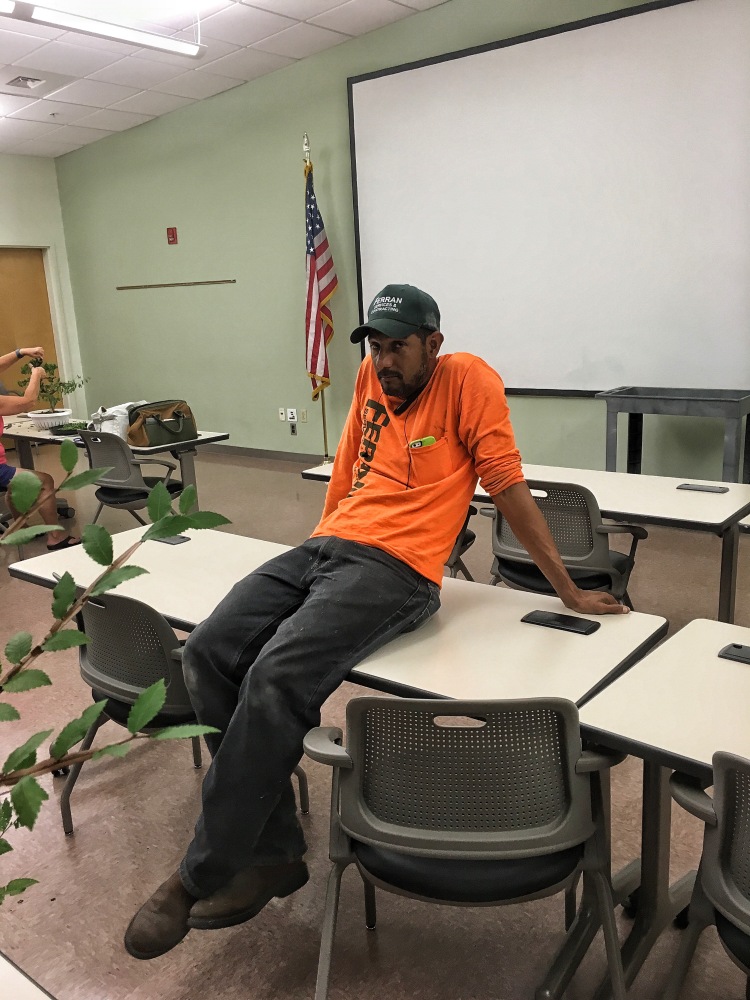 I also helped out Jose a bit with his portulacaria. 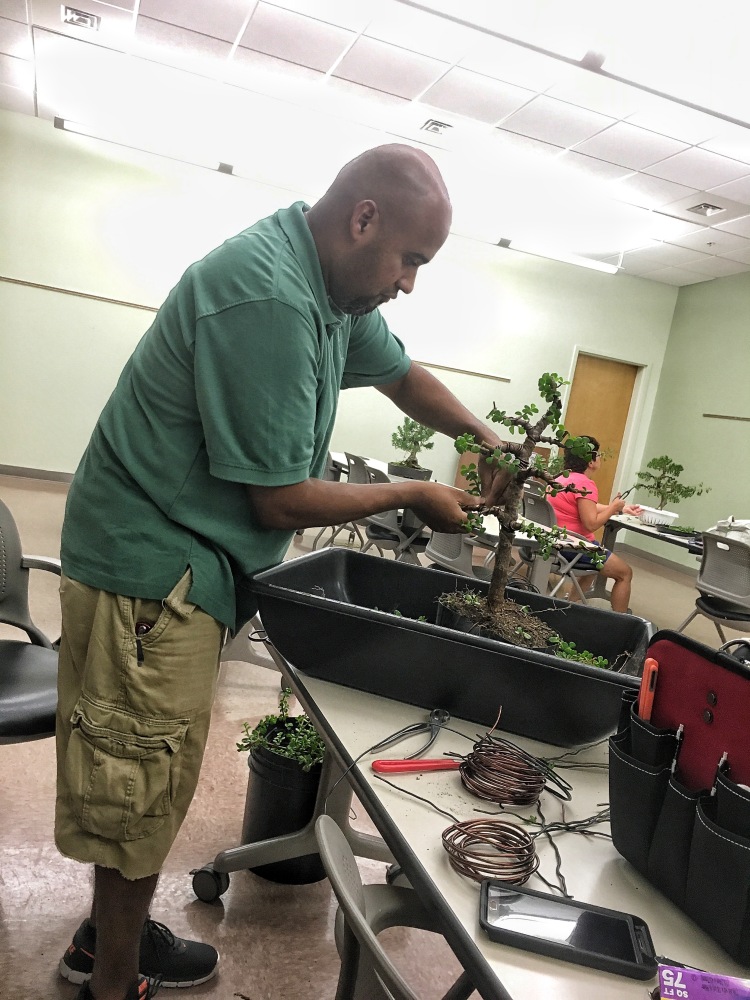 And that’s Diane in the background. It was really an impromptu meeting, I had scheduled the room at the facility (we meet at the Orange County IFAS/UF Agricultural Extension office) but I didn’t really schedule it on our calendar on the Club’s Website. But Jose and Diane both called me that day and I decided to go.

In the meantime, Gwendolyn had finished unwiring my tree. 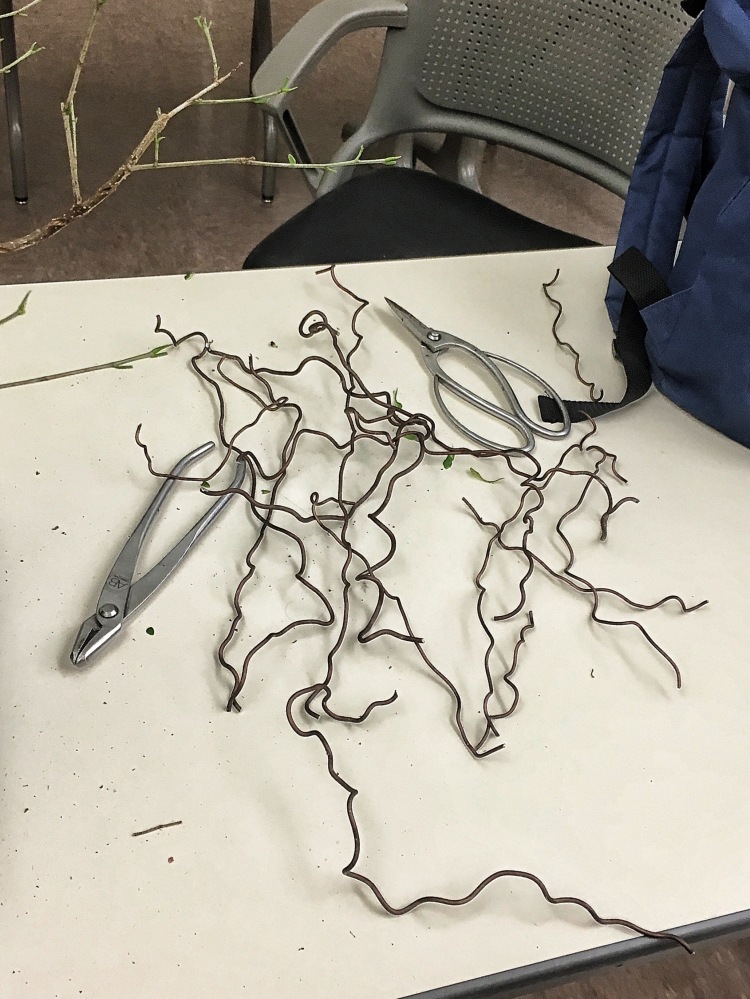 This was the easiest tree I’ve ever worked on!

But now it’s time for me to get started. I did a bit more pruning.

And some dead ends. 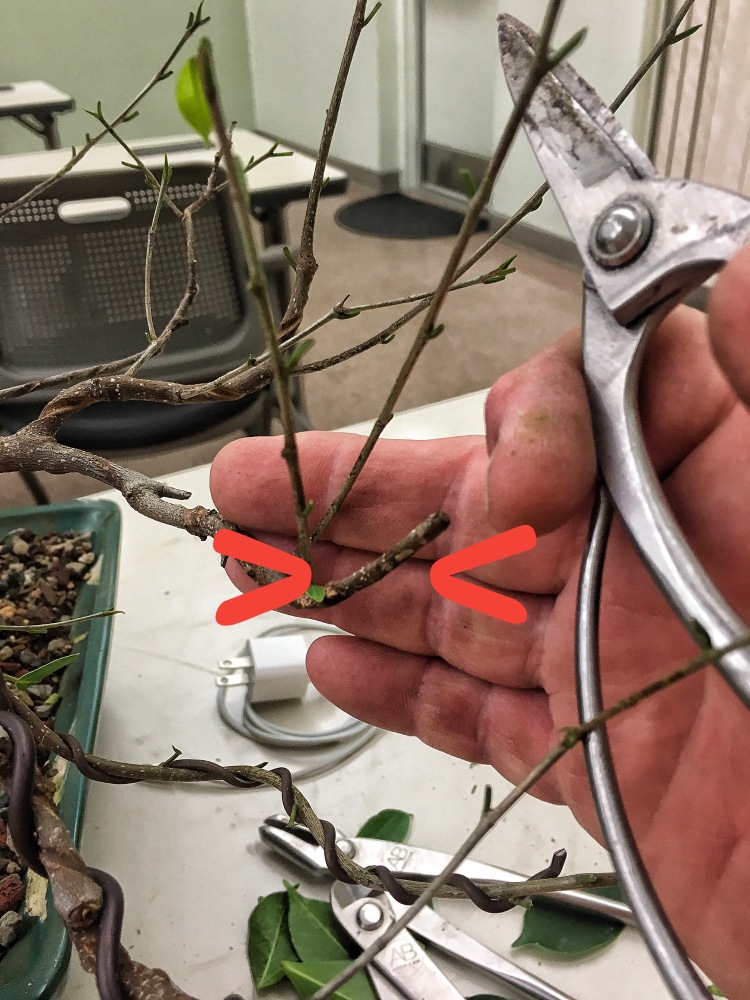 Which a ficus microcarpa is know for.

And then I rewired all the new growth.

This is only the second wiring on this tree so I had to keep some “whippy dips” to fill space.

That’s what I call the curly cues I sometimes use for apexes. 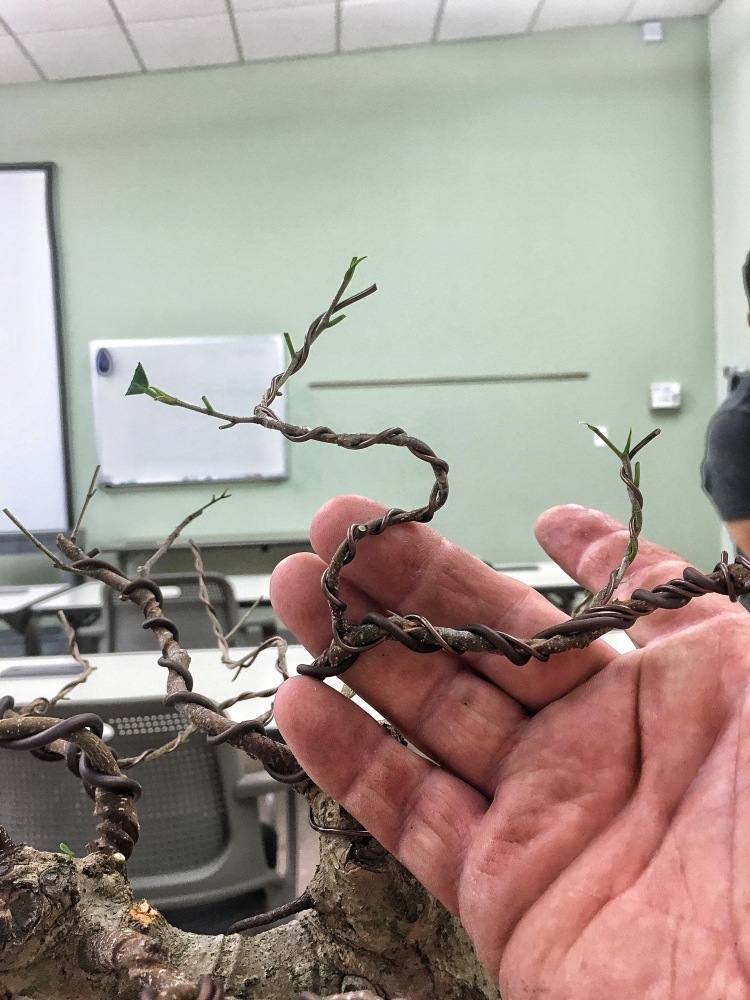 I showed my sister the above pic and she remarked how the branch structure resembled the veins of a human body. Here’s the tree after the wiring.

And here’s it is, back at the Nook the next day, after adding this one more wire.

Can you spot the difference? 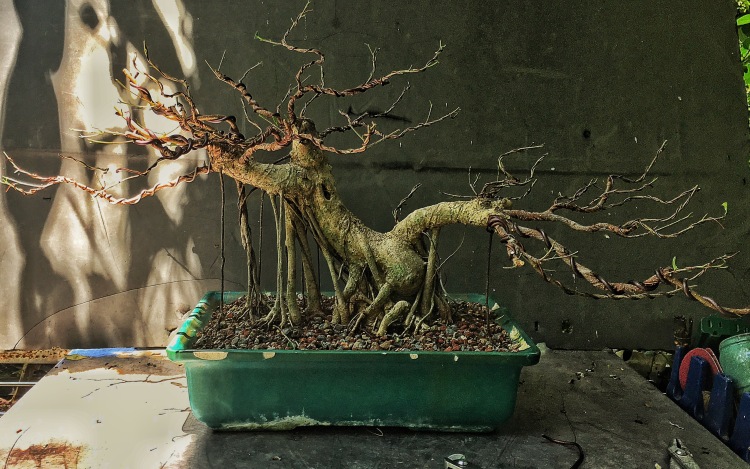 More fertilizer and back on the bench. I think it’s progressing greatly.

Keep an eye out on my YouTube channel, I’ll be posting an aerial video soon.

I think I’ll continue the banyan theme again for the next post. See ya’ soon.