I got it from my oldest son’s 7th grade teacher, Mr. Myers. That was a few years ago and it’s finally ready. 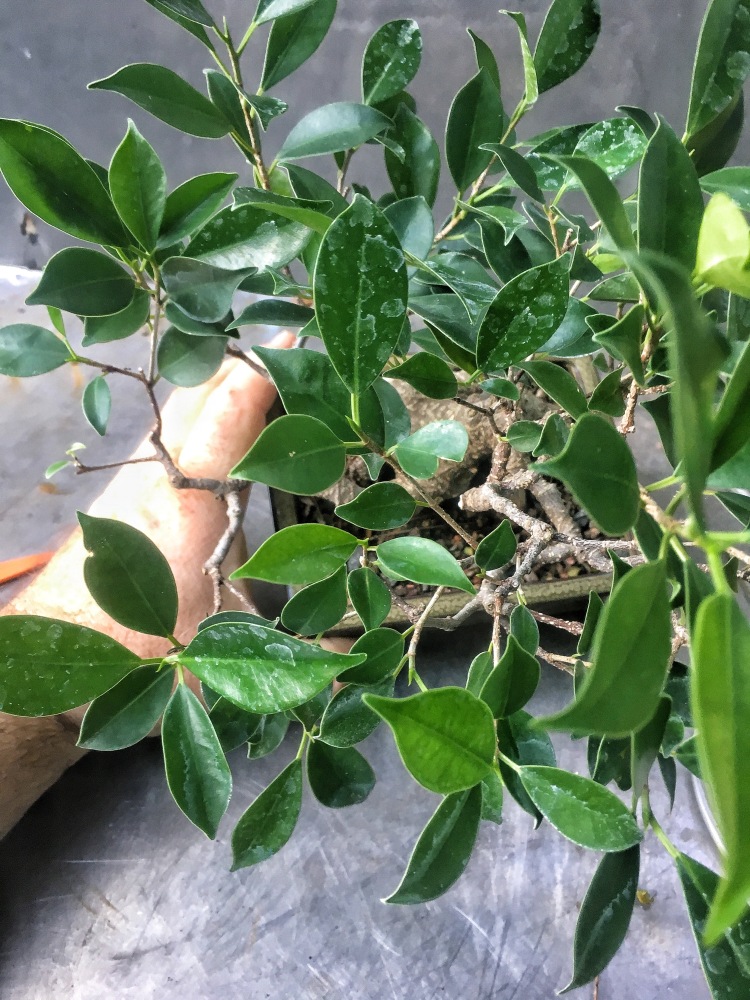 It’s taken a little while to get it to grow. He had nearly killed it and that’s why he gave it to me, to revive it.

I did some serious branch work on it, you can tell by the, almost, healed scars on the main branches.

The first branch does break one of my “rules” though. 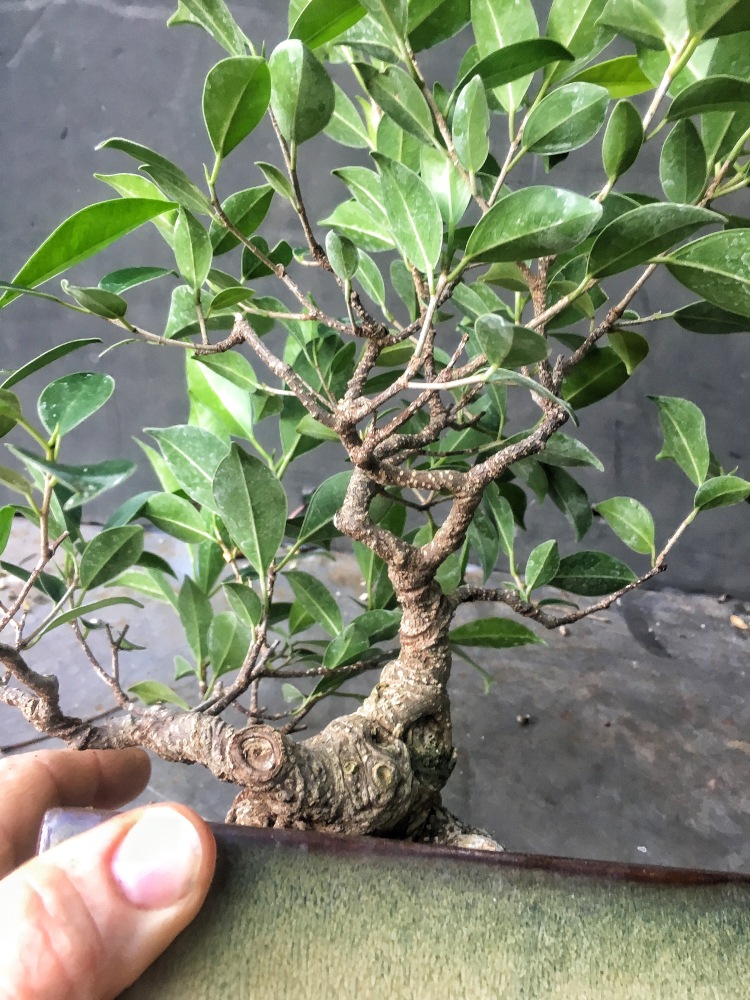 The first bend goes back instead of forward. But that’s because, as you see by that half healed scar, the “forward” part of it died back.

But there is a reality that over turns rules, “one must do what one can with shohin trees”. Meaning, there’s so little space on a small tree sometimes you have to “cheat” to get branches where you need them.

I’m calling this a tiger bark ficus. It’s also known as “golden gate” for some reason. 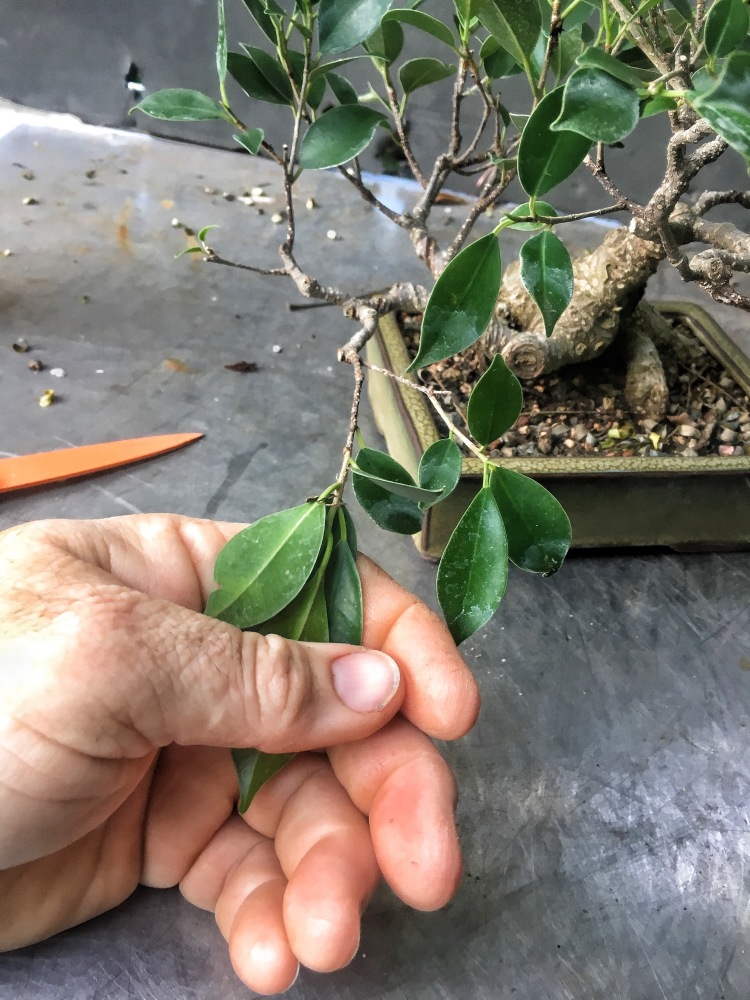 It’s a good, if not the best, ficus microcarpa varieties (don’t call it retusa, please….) the internodes are short, the leaves smaller, and the bark has that cool texture. Like a, well, tiger…..bark.

A quick aside: I see this on the forums and pages all the time, do you see the white, chalky looking stuff on the leaves? 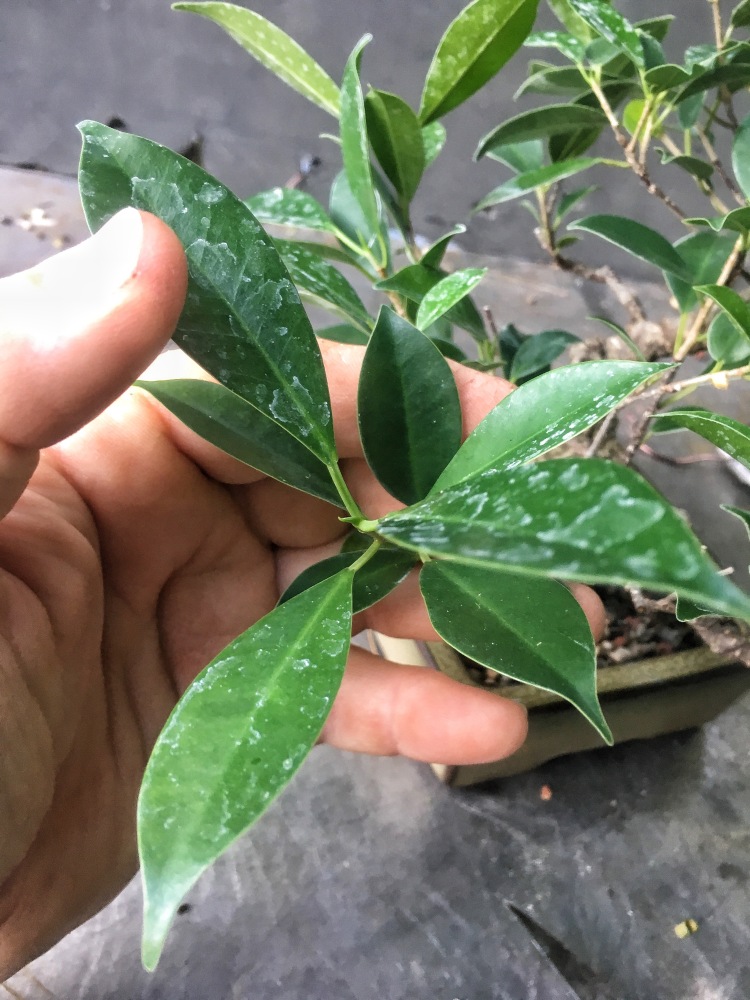 That’s just water, usually it’s calcium or lime or some other dissolved solid. It just means that the water you are using is hard. If it bugs you, you can use a soft cloth to polish it off, use that “leaf shine” stuff on it, rub it off with your thumb. And try not to get the leaves wet when you water. That last bit is actually a good hygiene practice; wet leaves invite fungus. I see this more in the winter and spring (the dry seasons) because I’m having to water by hose more often (as opposed to watering by hoes, which adds so many more complications…..sorry, I know. Bad Adam). 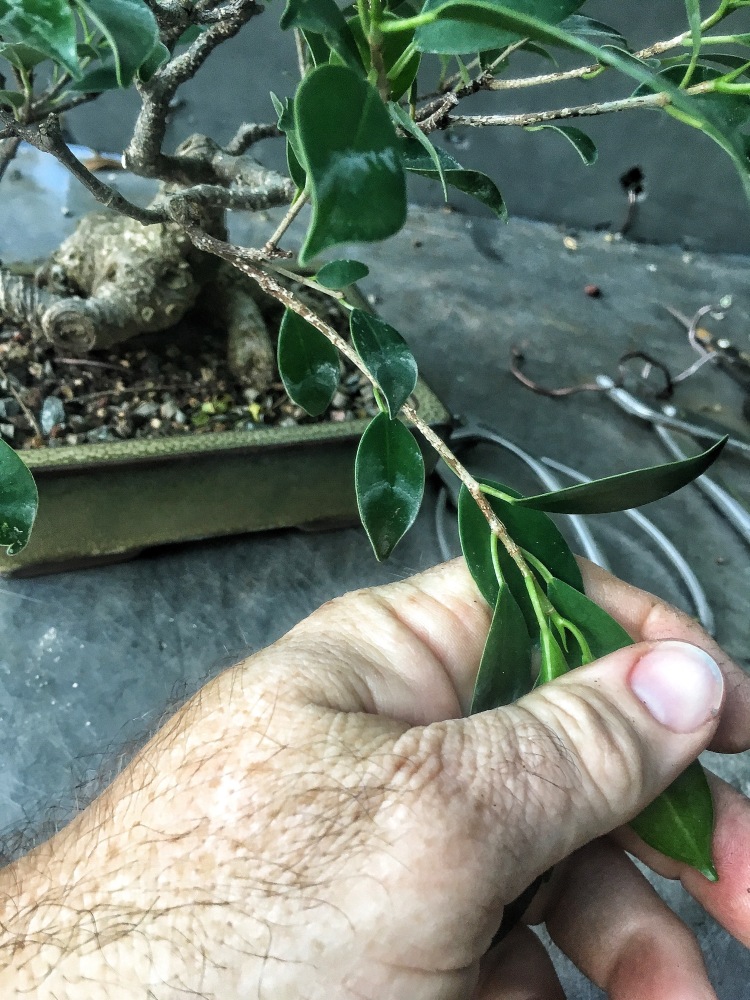 Therefore, using deductive reasoning (as opposed to inductive reasoning, which is what makes an electric motor work) it’s deducible that it, is, indeed, the Winter when I am doing this work. What can I do to this poor tree now, eh? It’s a tropical, do I want it to live? Thrive? Continue to give me pleasure? Well, how about a partial defoliation of the older leaves? I think I can do that. 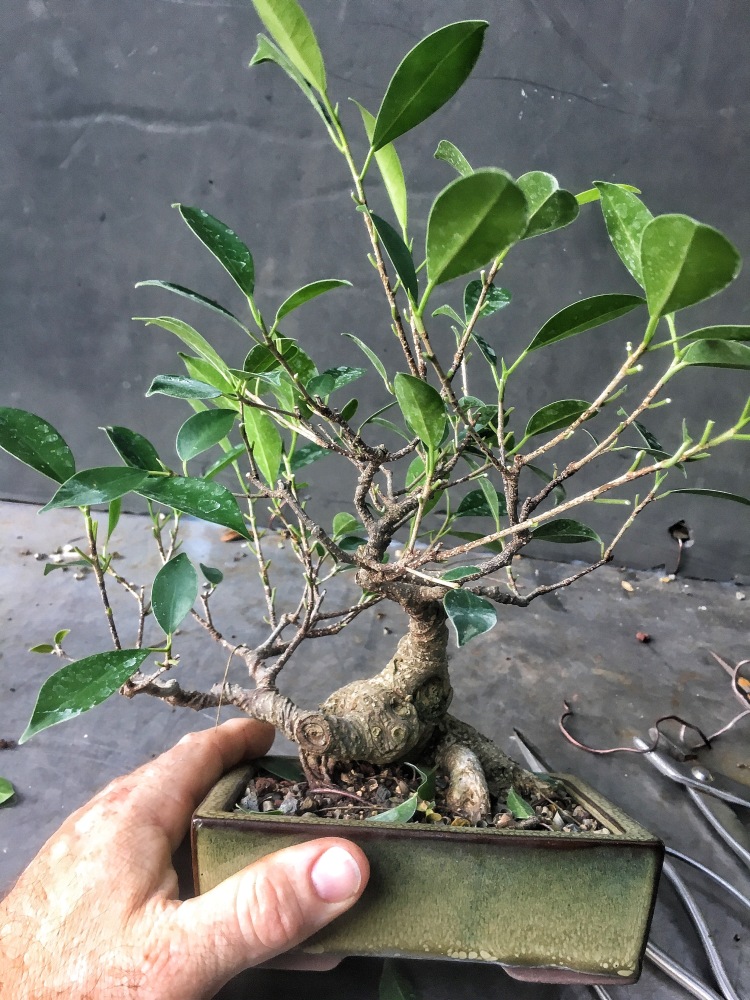 Look at all the branches! That is a bonsai artists wet dream (hence the “give me pleasure” line above).

That means that, one: we have something to work with and, B, it’s healthy. Maybe “B” should come before “one”. Meh, it’s just bonsai, right? 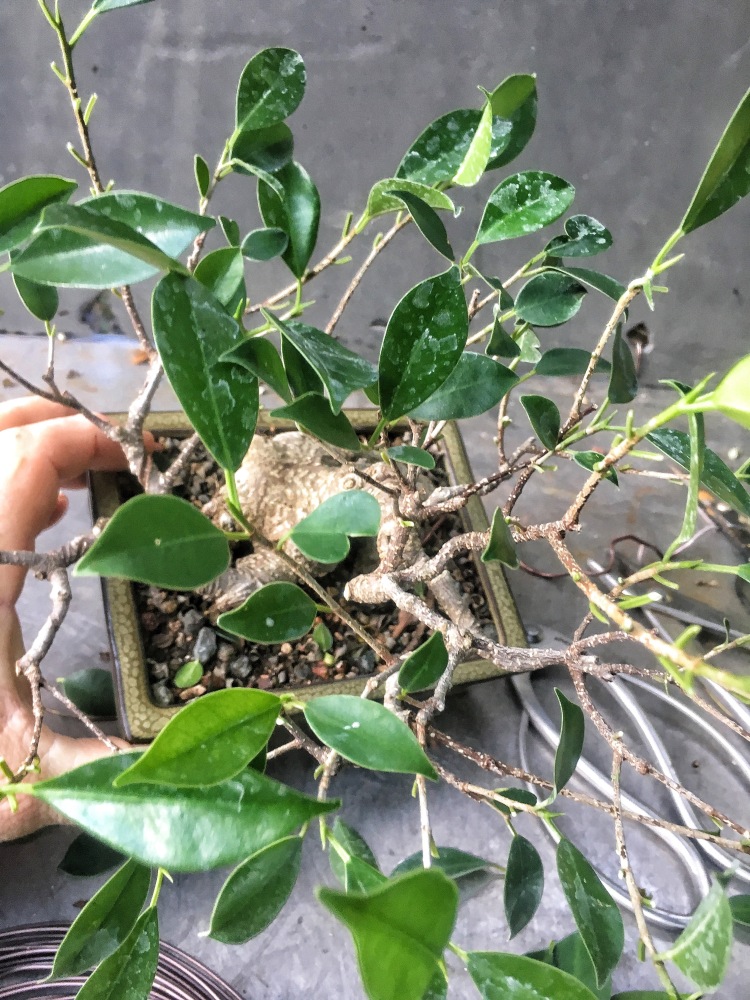 How do you achieve branching on a small tree that doesn’t really get as dense as you’d like?

Style it. Let it grow. Then, topiary trim it. Or hedge prune,  but it’s the pruning that causes ramification. It doesn’t have to be fancy, just prune it like you’re using a hedge trimmer.  You can’t be afraid to cut. In bonsai we have two tools to shape a tree. The scissor and the wire. Prune and bend, cut and shape. Which brings us to the wiring.

A little loose. That will be a problem in a second or two.

I had removed wire just a few days ago, which you can see some of the newer scars on the top branch.

It amazes me how torqued people get at seeing wire scars. It’s either horror or a holier than thou response. But, and I’ll say it again, on a ficus (and many trees), if you don’t let the wire cut in, the wiring job will be inneffectual. It will just mice back to the original position.

Oh! Here’s what happens when your sloppy with the wire coils. Tsk tsk tsk! 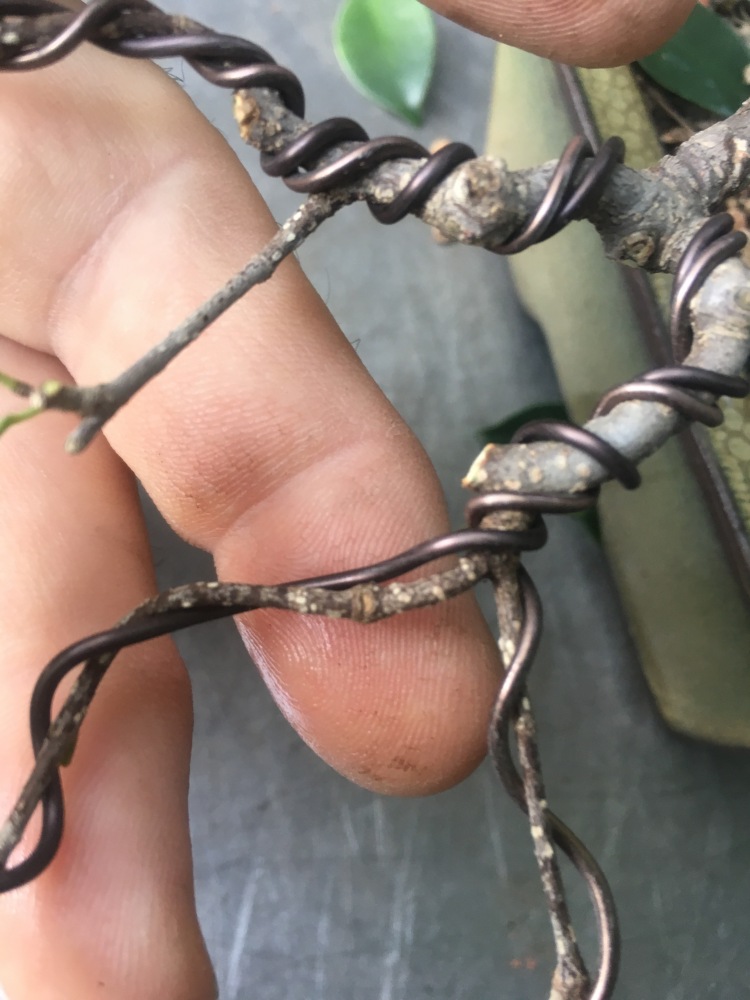 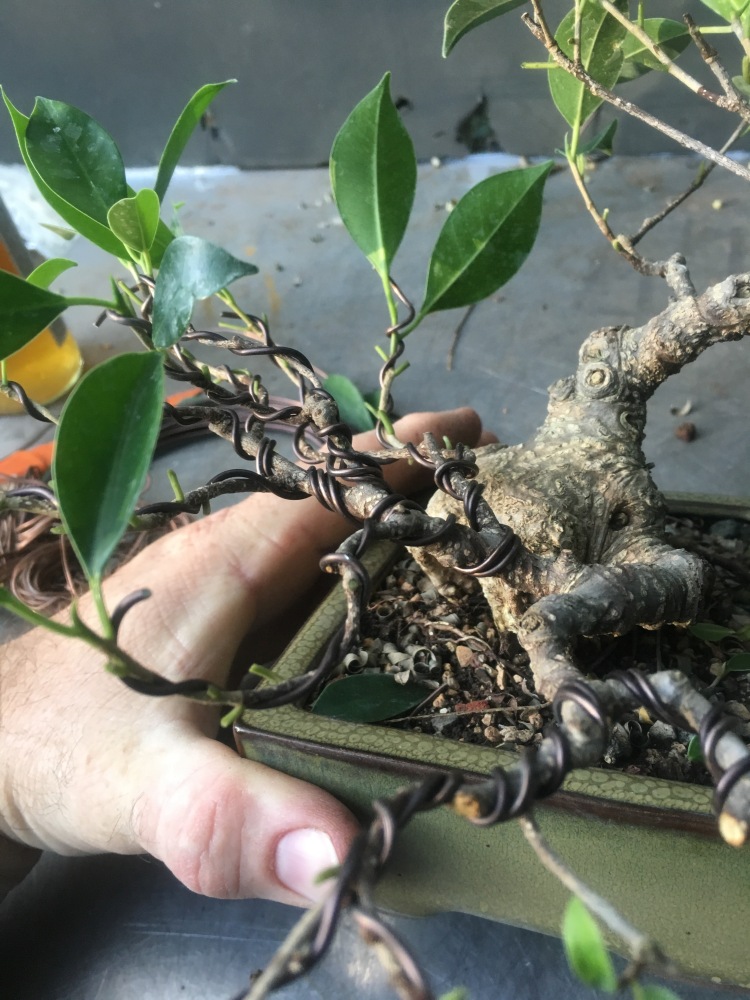 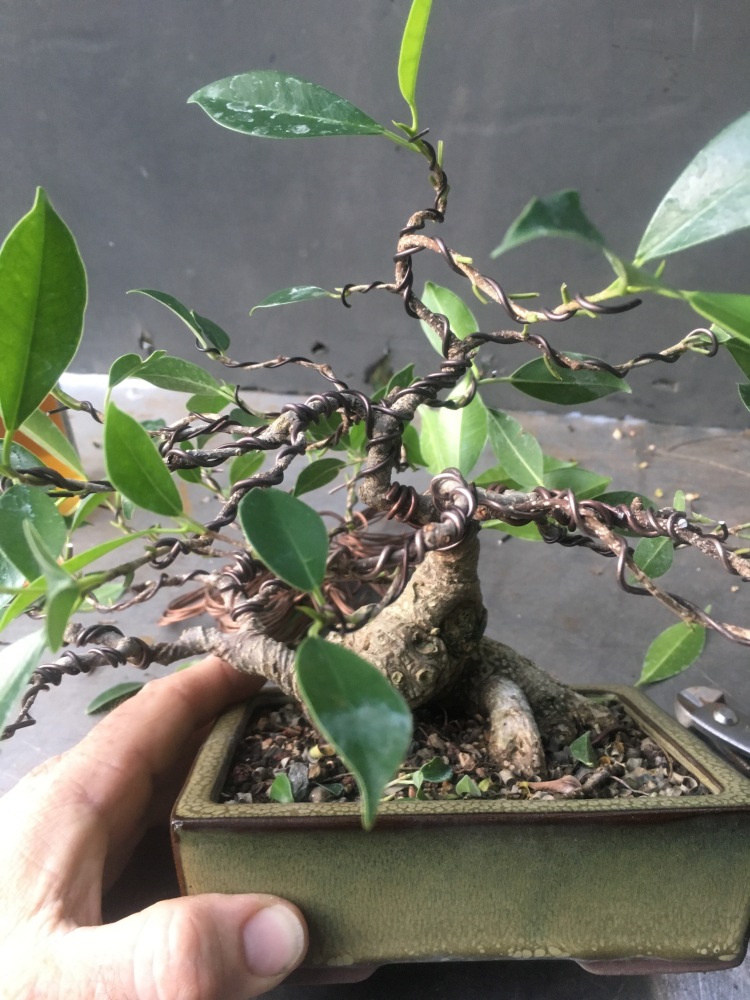 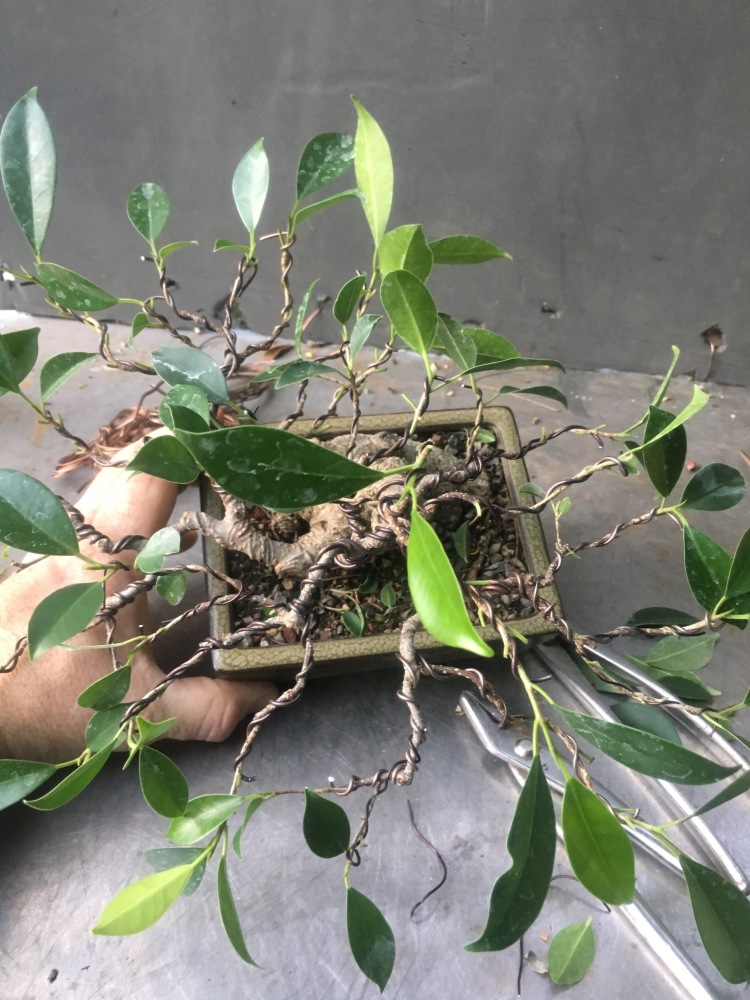 If’n you’re paying attention, you’ll see that I haven’t trimmed the tips yet. If this were a colder winter, I may keep it this way, to minimize dieback.

But, since I’m such a rebel, an iconoclast, a loner, and just a plain contrary ass, I’ll prune it too. Just so your eyes aren’t so fixated on the  out-of-sorts leaves.

Which, truth be told, aren’t going to help much, photosynthesis-wise anyway. 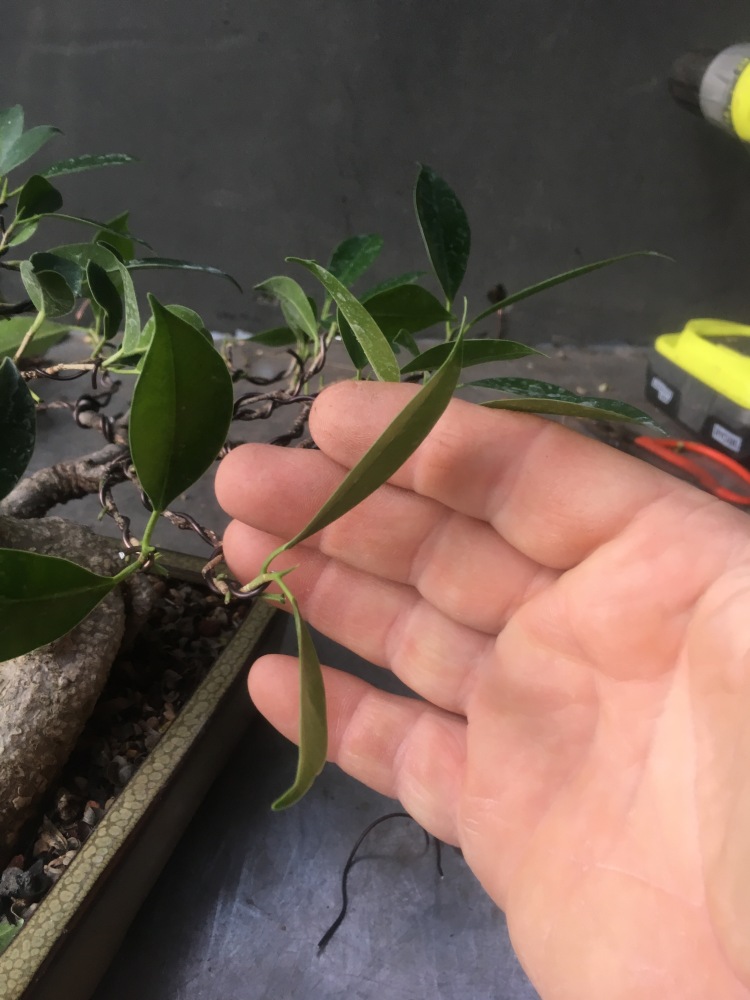 How’s the sun gonna hit that? 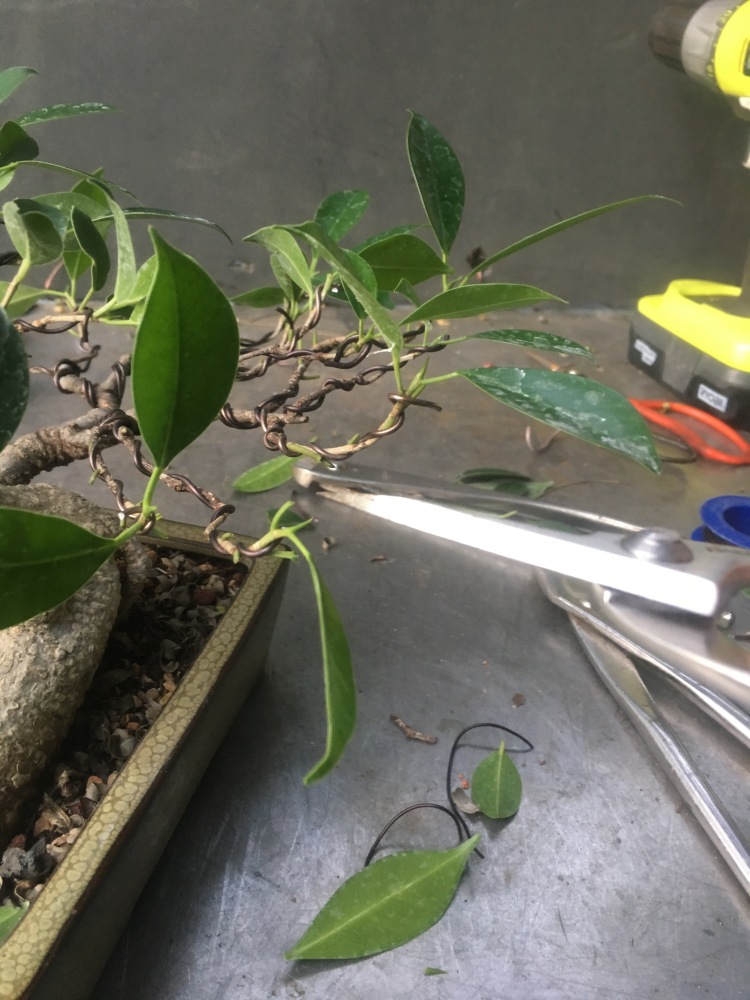 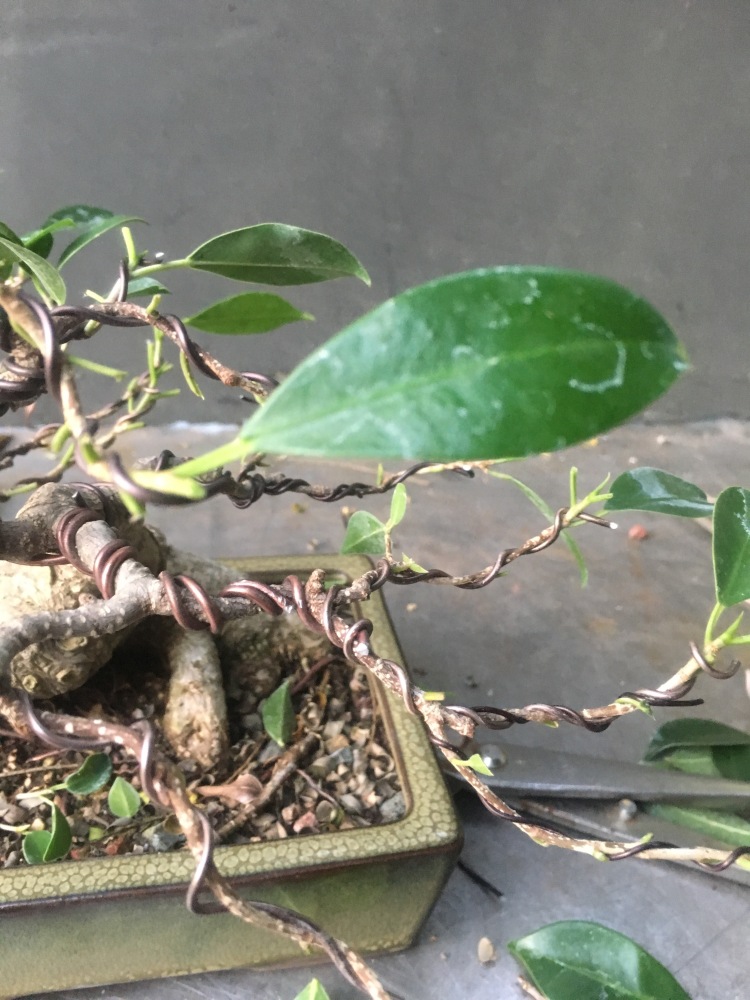 Try to leave the leaves that are horizontal with the maximal surface attitudinally adjusted for optimum photosythnthetic effect…….don’t you hate it when people use 25¢ words?  Make sure the tops of the leaves are on top. 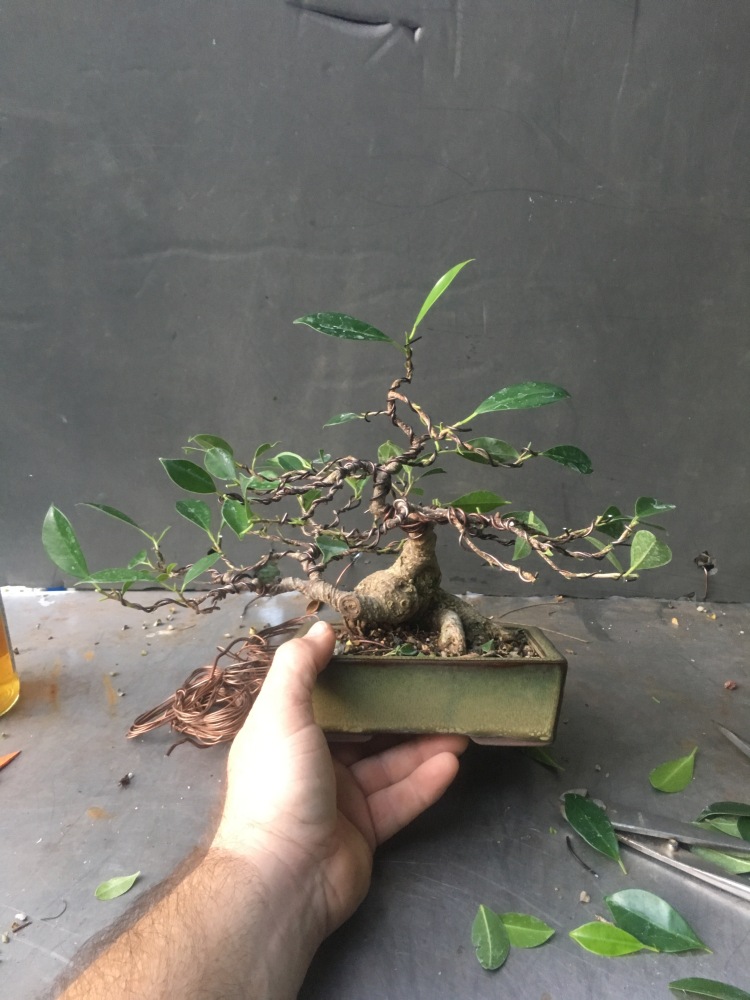 Now then, that might be all you poor people in the frozen north should do now, with your tree inside under lights. 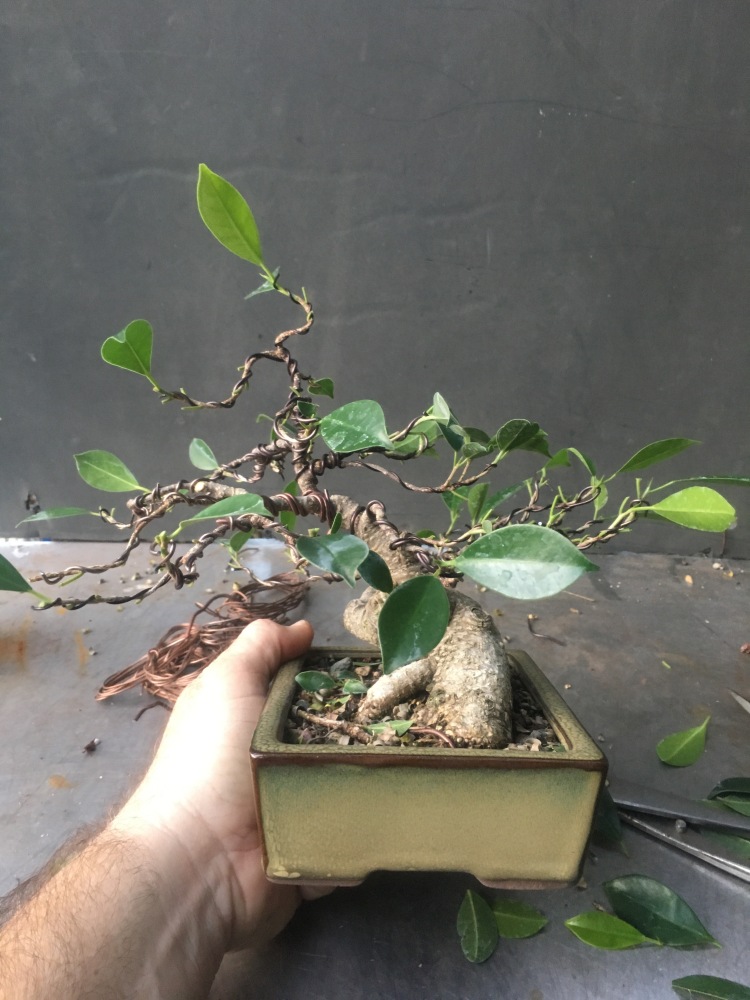 Push the envelope, so to say. 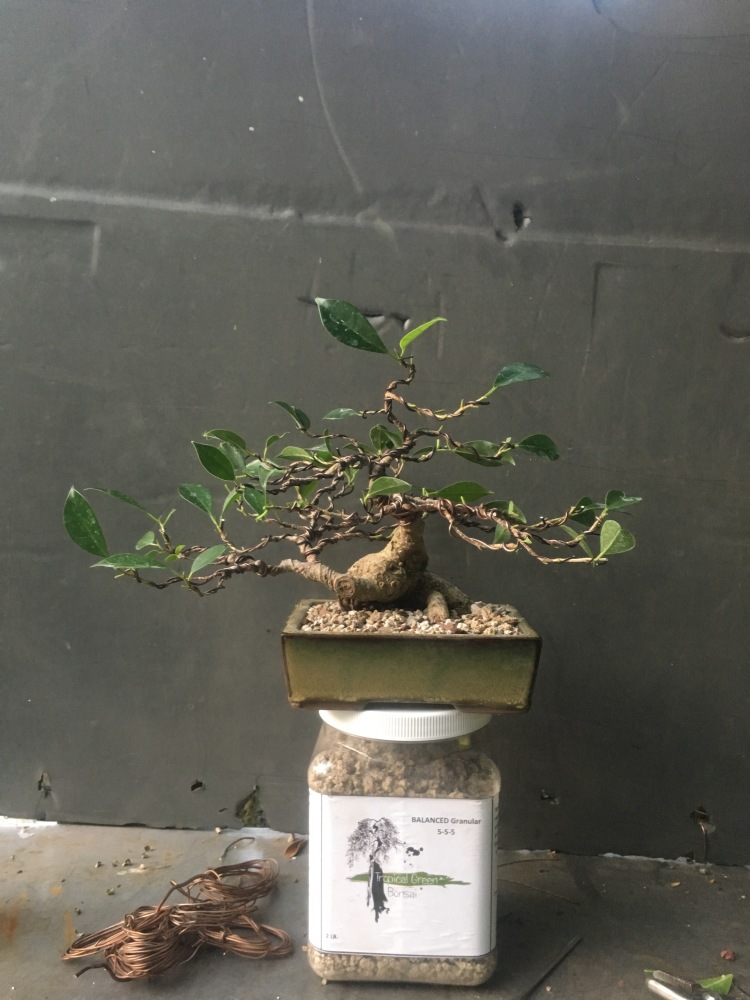 Let’s see if good ol’ Ma Nature slaps me down with a cold front. 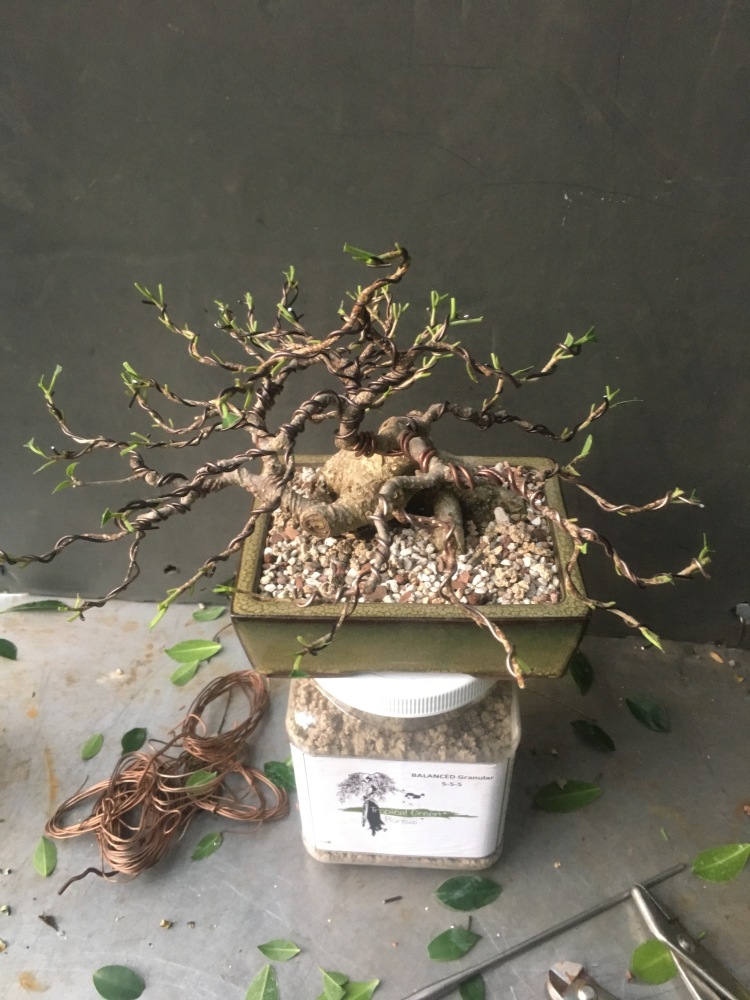 Yup, I full out defoliated and pruned. 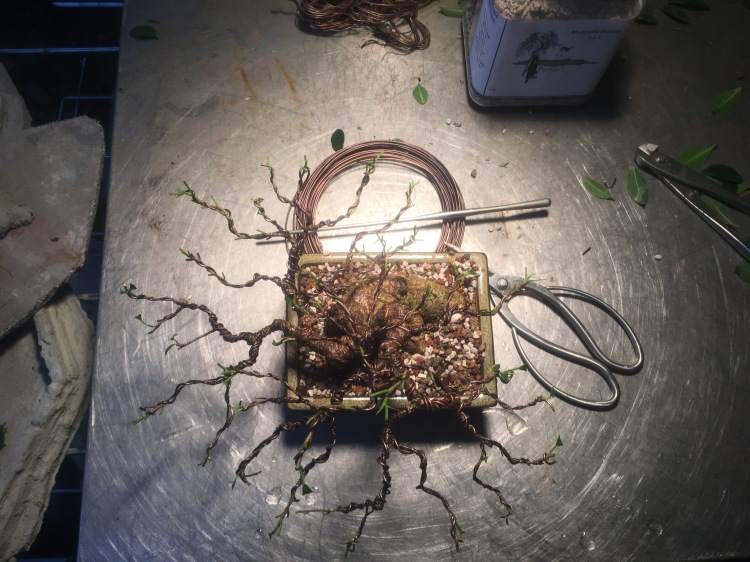 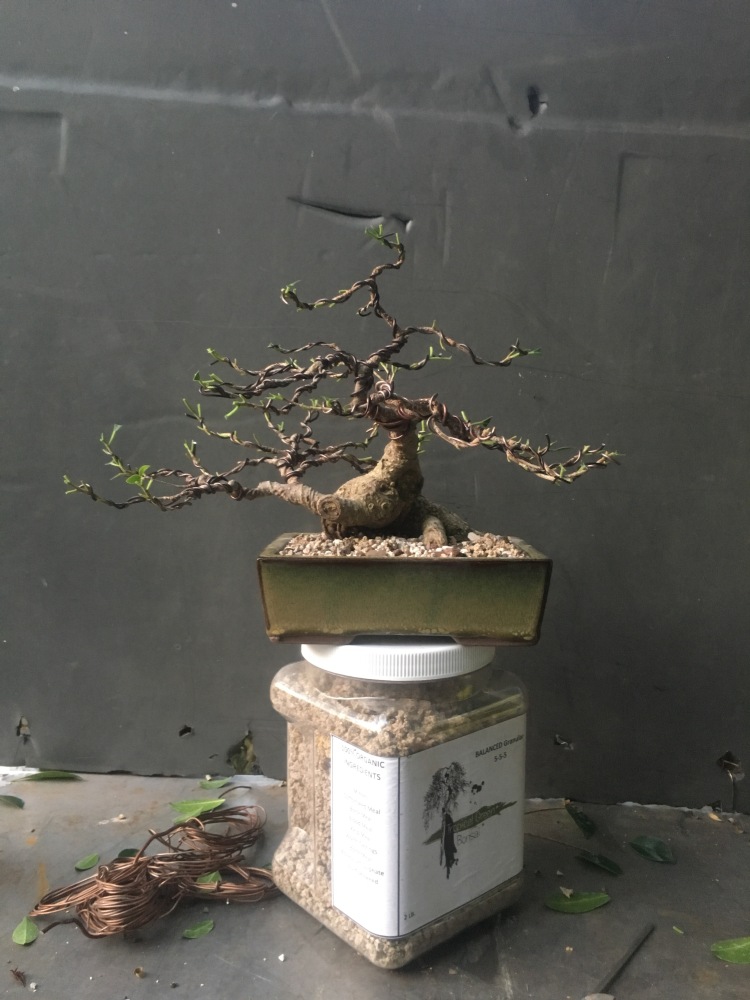 You can really see the structure this way, and the taper too. I’m doing it for you all. No, really, so you can see. And I’m trusting in the magic of the Internet to keep this tree growing.

It got fertilizer, of course, I used Martha Goff’s Tropical Green brand. It’s my first time using it so we will see how well it works. Now, let’s see how the weather holds…..

I did the work about Christmas time and I’m writing the post on January 12th. We had two cold nights, one at 37f and one at 40f (2-4c).  Let’s see what havoc I’ve wrought. Was Mother Nature kind? Did she smack me up side the mouth?

I fixed that wiring by the way.

There’s even budding back!

I count four new buds, do you see them?

Sometimes you just need to thumb your nose at convention and do what you think will work.

If it doesn’t work then, well, they say that it takes a person killing about a thousand trees before they can become a Master.

Looks like I need to prune it back on the left…….
Now, seriously, don’t do this to a tree unless you can provide proper conditions essential to growth. I knew that I would have them (above 60f nights, adequate light, moisture etc) and if you are keeping them inside, just invest in some indoor growing stuff like full spectrum lighting, a horticultural heating pad, a humidifier etc. You can push the envelope too, as long as you pronounce it the douchie way, “aaahnvelowpe!”