Just because you have a fancy name,  chloroluceun tortum, doesn’t mean you’re safe. Most just think of you as the Brazilian raintree.

Let me tell you a story. I recently picked up some trees for my vendor table at the upcoming Bsf/Abs joint convention in Orlando (Click here for details). I was looking for trees that I could pot up for quick sale. Like this jade:

Or this other raintree:

Look at that movement, dayum!

But you, the tree I have in front of me now is….ummm, just wrong. 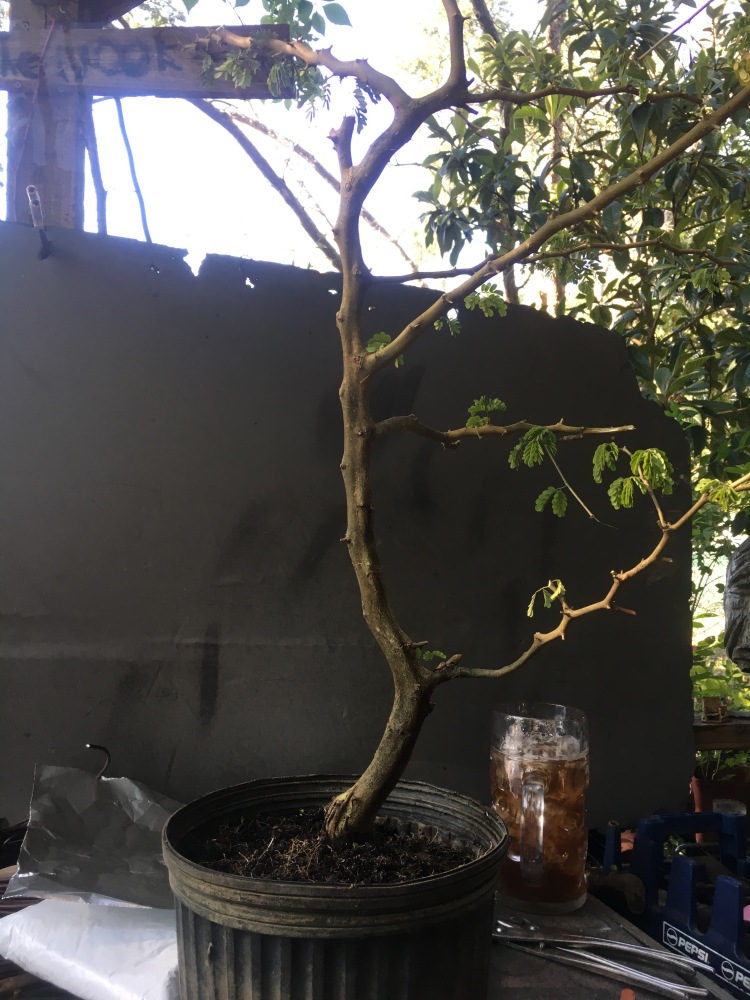 Well, actually, from here down… 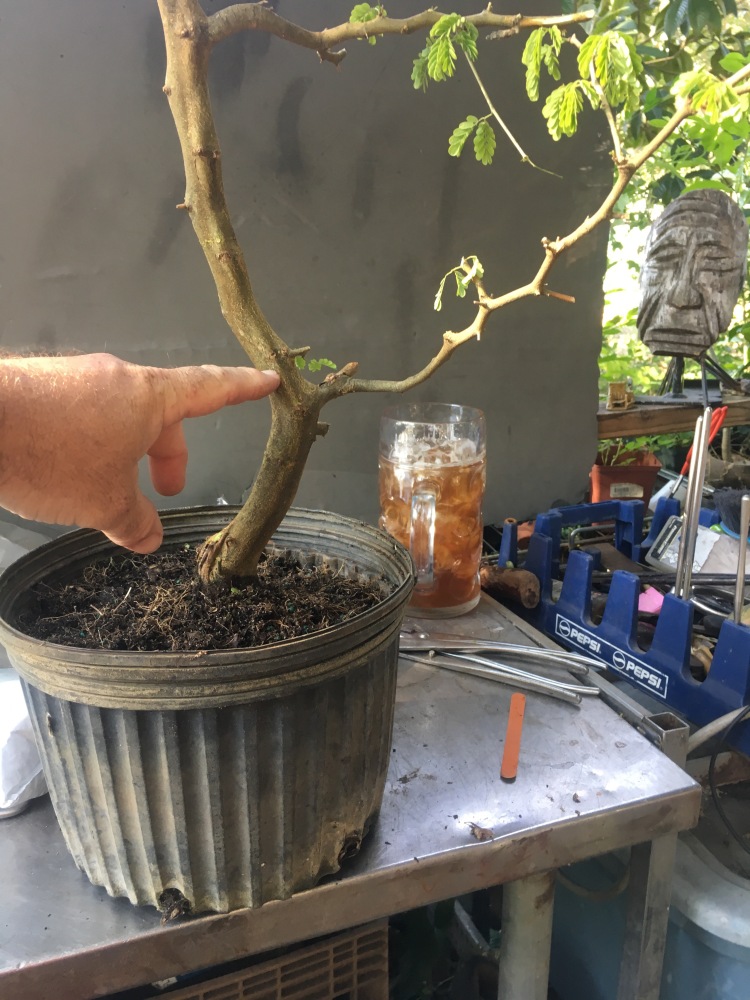 ….you’re not bad. But this long section….

……you have no taper, no interest and you’re just kinda flat. Soooooooo……since I am contractually obligated to make at least one airlayer post a year and, it’s the month of May in Florida, I think I know what to do….

We have the moss. 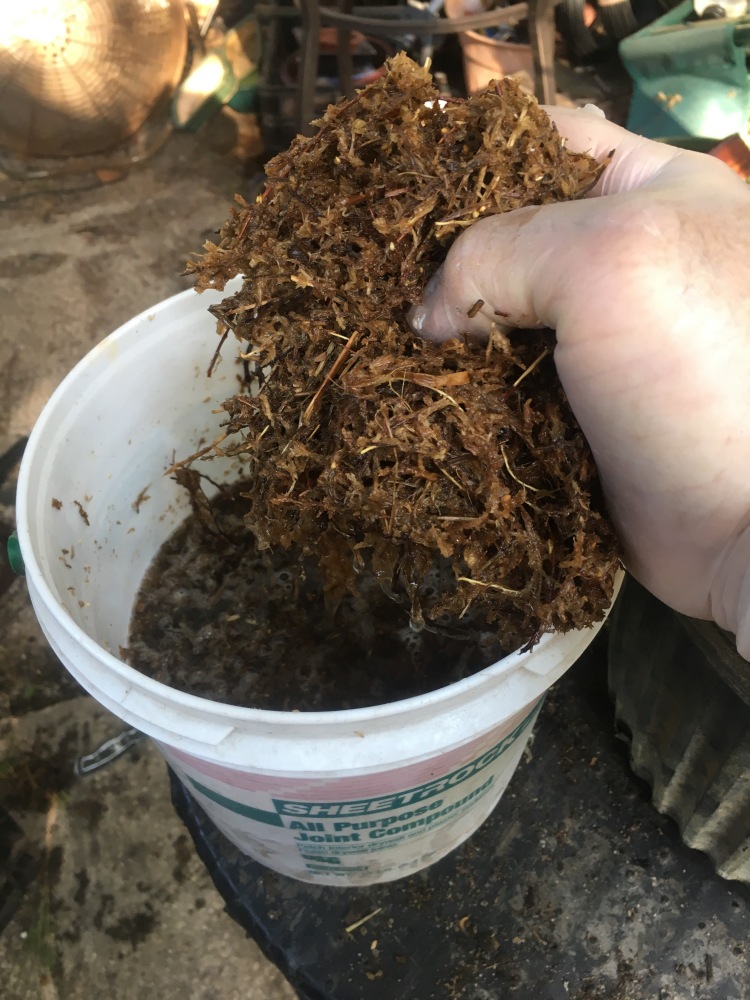 We have the foil.

And, of course, the knife….

The basic operation: make two cuts, parallel, and about the thickness of the branch or trunk apart. Then scrape or carve off the bark, cambium, et al, betwixt the two cuts. Like so:

​​
Yes, it’s a vertical video. I did that to annoy someone. Maybe it’s you, yeah, you, you know who you are, you butthole.

Be conscientious in the scraping of the outer layers of tissues. You don’t want to see any green.

It should be the color of the wood, in this case white.

Now, holding the foil in your mouth: 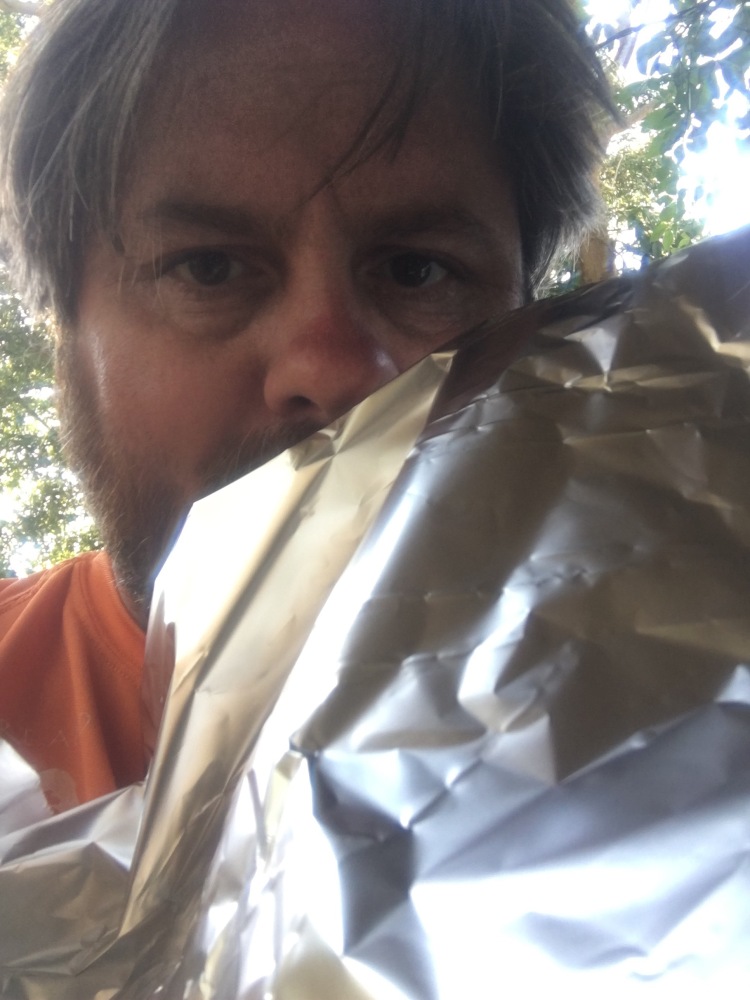 (Ignore that odd electrical sensation one gets while doing so)..,…

…..and holding the moss in one hand and the camera in the other… 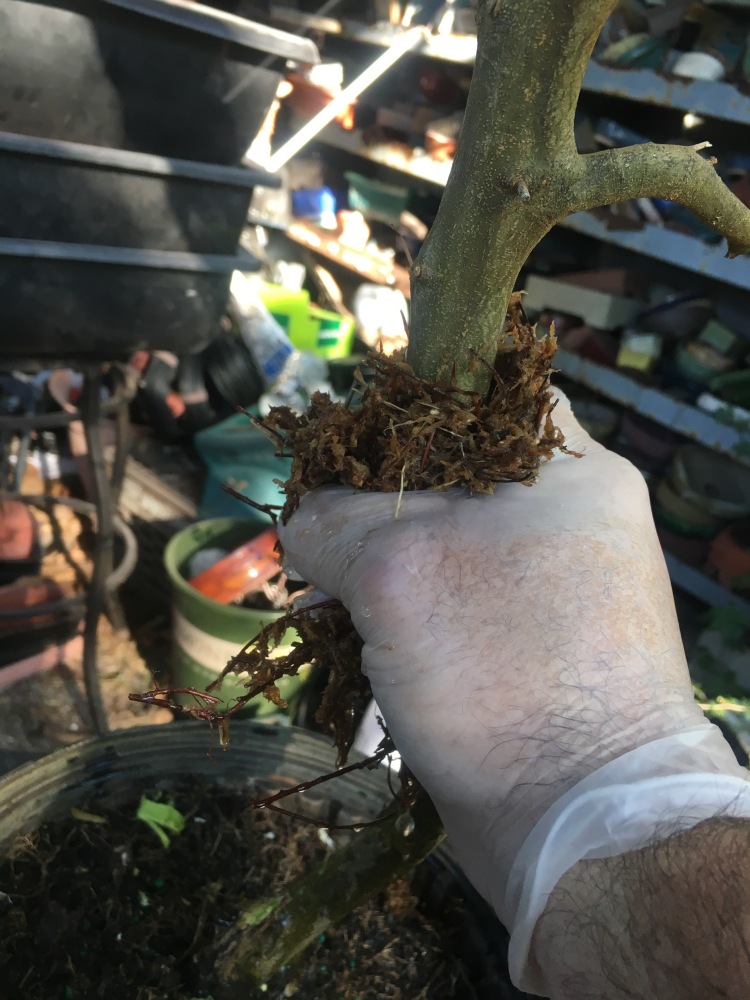 (……notice the glove, sorry, here’s a quick PSA, to save me from getting sued: when working with sphagnum moss, first, always say sphagnum like you are Daffy Duck. Second, use gloves. There is a nasty fungus one could get from sphagnum moss called, and I quote the CDC:

“Sporotrichosis (also known as “rose gardener’s disease”) is a rare infection caused by a fungus called Sporothrix. This fungus lives throughout the world in soil and on plant matter such as sphagnum moss, rose bushes, and hay. People get sporotrichosis by coming in contact with the fungal spores in the environment.”

……..wrap the foil around the sphagnum, which has been wrapped around the cut on the tree. Man, that last sentence was laborious, with two or three pictures and a quotation in parenthesis and all.

Now, before you all ask, no, I don’t use the so called “rooting hormone”. I find that it’s not really needed and, if you use too much, and who can really say how much is too much, it will just heal your cut and you have a failed air layer. You see, rooting hormone is a form of auxin called indolebutric acid. If you remember from my plant hormone post, auxins are responsible for elongation of stems, healing of wounds, and developing roots (ok, it does technically stimulate root growth, but all hormones seem to do that). But, if you read carefully, the amount of hormones in a plant are so small as to be almost immeasurable. High doses of auxins stimulate the formation of ethylene gas (yes, the gas responsible for making tomatoes red) which can cause leaf drop, stunted grows and even stem death. And, if you read even more carefully, when you take two other types of auxin and apply them as a foliar spray, you get Agent Orange. For those to whom the study of history holds no interest, Agent Orange was an herbicide used in the Vietnam conflict to destroy the jungle. It worked, and caused all sorts of health problems for those who were exposed to it.

As a caveat, some plants do need the rooting hormone. But our Raintree does not. I suggest your first attempt at an  airlayer be done on a BRT, it can be accomplished almost every day of the year.

To continue, I wrap the foil shiny side out. 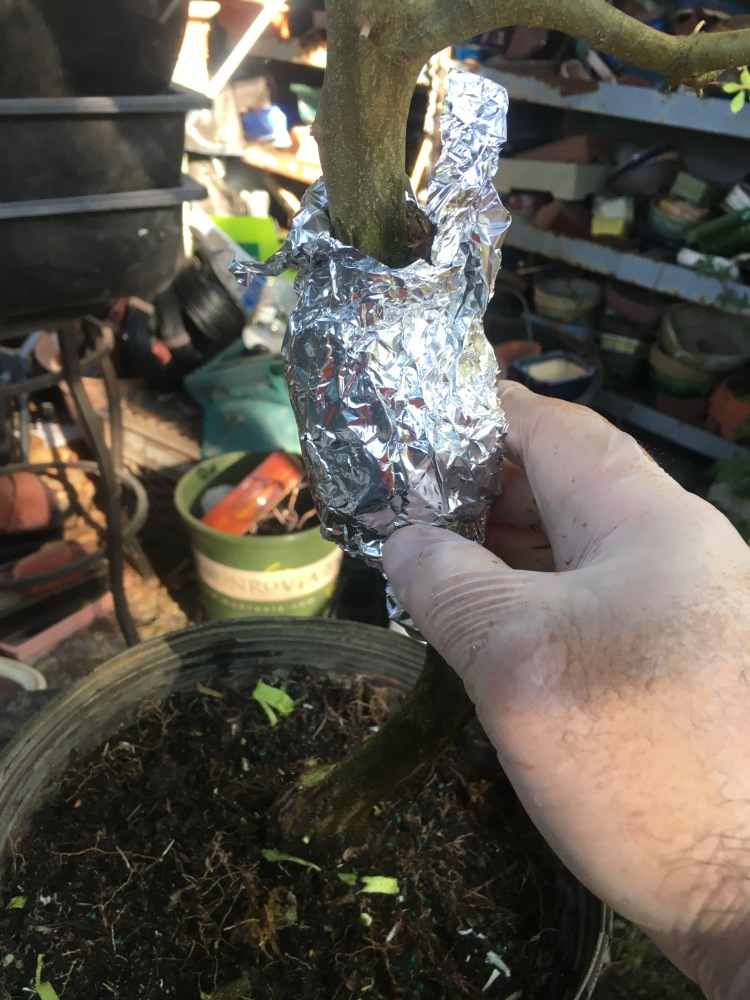 I use foil for several reasons. First, it’s easier to mold around the moss than plastic. So putting it on the tree is easy, especially with a camera in one hand. Second, it reflects the sun, keeping the roots cooler in the summer sun. And third, unless you use black plastic, which could get hot, it keeps light out of the moss ball. One requirement for root formation is, strangely enough since roots happen under the dirt, darkness.
I like to use wire to close off the two ends of the foil.

It’s my bondage kink. But I will leave a slight opening at the top to allow water to enter my foil package. 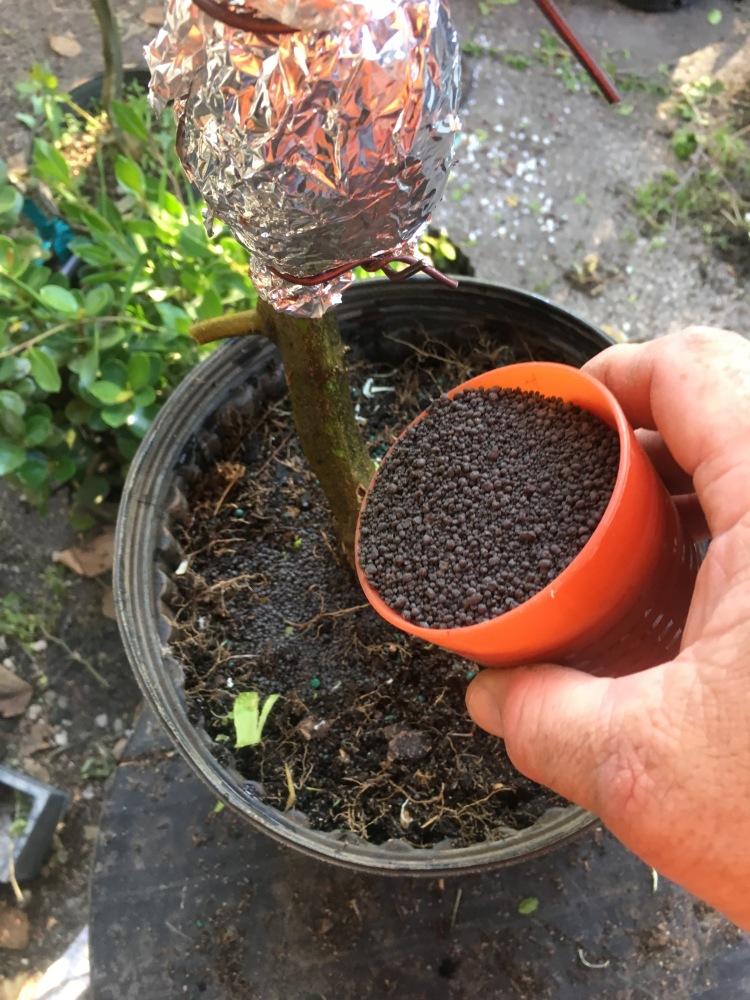 Growth on top equals roots on bottom. I like to use an organic with my raintrees, to help feed the bacteria in the nitrogen fixing nodules. 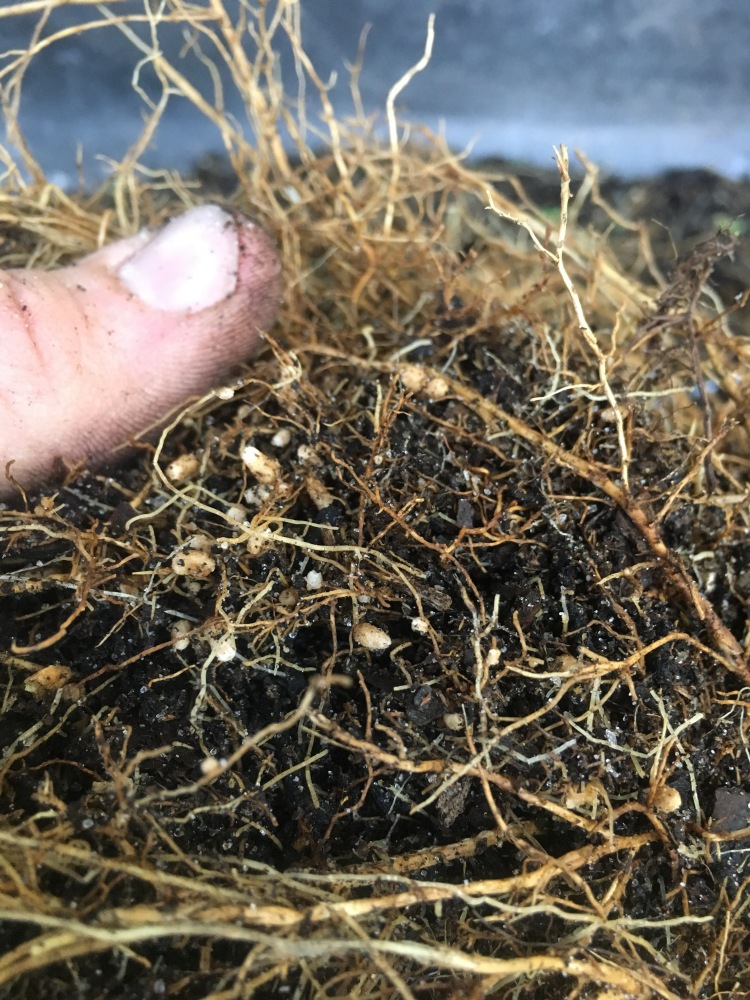 I explain the nodules particularly well in the post Skinny Vanilla Latte Raintree. A masterful piece written in an inspired, neo-classical prose style, following a suspenseful and surprising plot arc. You’ll gasp at the ending after being on the edge of your seat, anxious and worried for the trees plight……

And, after all that abuse, my plain tree, you and I need but wait. It’s been fun propagating with you, even though I needed a knife to do it. I’ll check back in two weeks. Let’s see how fast those new roots grow. Or four weeks. Six at the most.  Soon we will have two of you!