I picked this Hackberry up at the 2018 BSF convention from a gentleman named Gene. 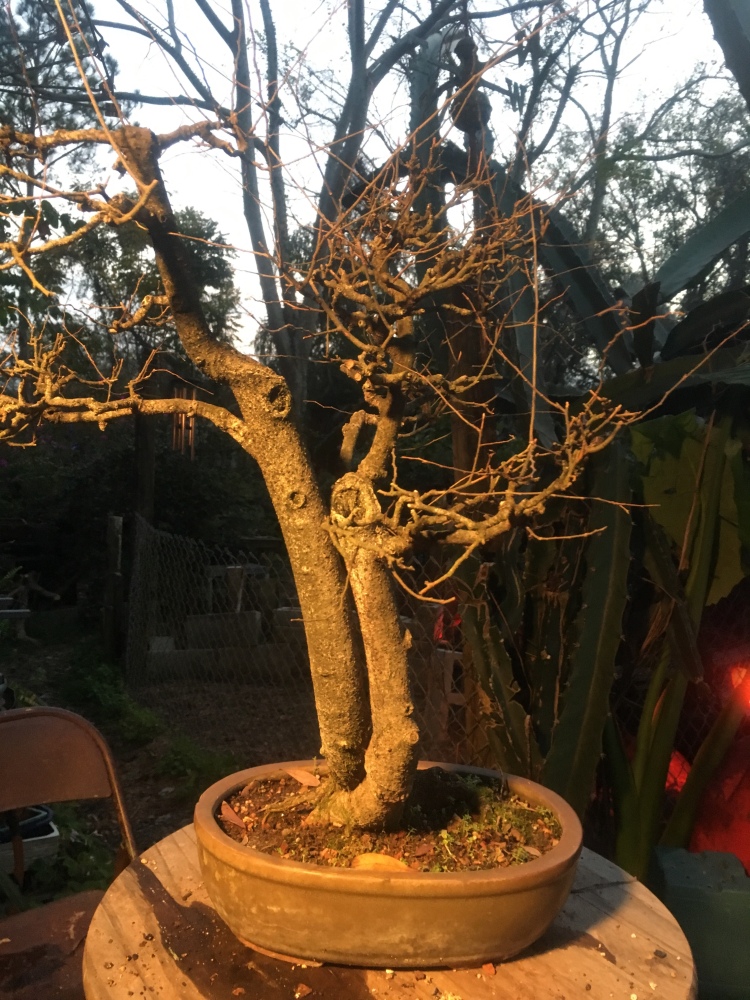 It called to me, as they say. Those who’ve gone to a major show understand it. I was a vendor, as usual, and I’d been looking at the tree every time I made the rounds in the vendor room. Gene has been selling off his collection for the last few years and he’s sold some real beauties. Things he’s been growing for thirty years or more. Being the bohemian artistic soul I am (read that as dirt poor) I never could afford his bigger trees. But, if you’re a Regular Reader of the Blog, you know I don’t go for conventional trees anyhow.

And with this tree, there’s something very interesting, to me….I’m not sure if it’s the ramification, or the root base, or the movement.

Well, I know it’s all those that I like. Those features give the tree age. But I think it’s going to be the challenge of finding the best view for the piece that I’m really intrigued by. And savoring. 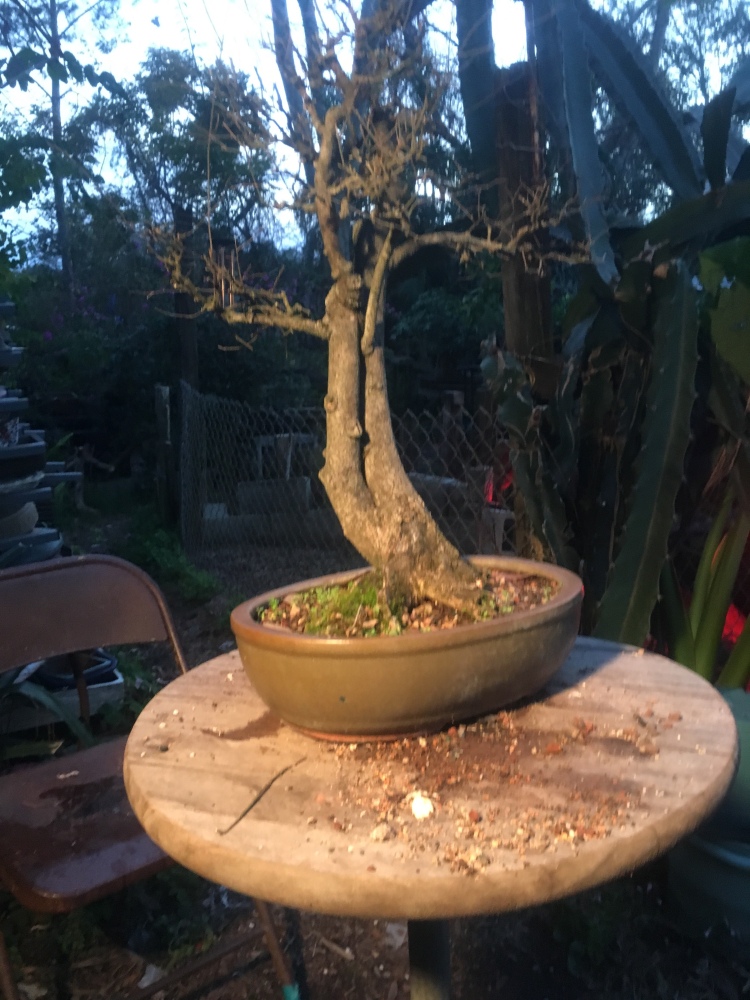 Savoring, in the sense that I have literally been turning the tree, round and round, changing the angle of attack, standing it upside-down, and looking at it for 8 months (literally meaning the actual, factual and dictionary definition of the word “literally”, not how many of the younger generation use it, meaning metaphorically. Now, don’t get me wrong, there is a slight change in the way words are defined, and used, as time marches on, but a word like “literally” has this very concrete and specific definition, meaning, literally, exact, specific, word for word, verbatim.

As I said, the tree came from one of the old timer Bonsai Society of Brevard club members, Gene. I have an idea where it may have even been collected, one of my favorite spots I go to (I’ve been twice this year and plan on one more trip) where the trees grow in a ditch on the side of a dirt road and they are slowly being destroyed by the road maintenance crew, every time they resurface it. It’s really quite sad, seeing the full sized hackberry with trunk scars from the road equipment, the roots sawn off at the road edge, weakening the old trunks.

This little tree, a root sucker for sure, is a twin trunk, technically, but has fused at the base (not this view, but on the inverse side)

Surprisingly, the tree is still flexible on some of these old branches. 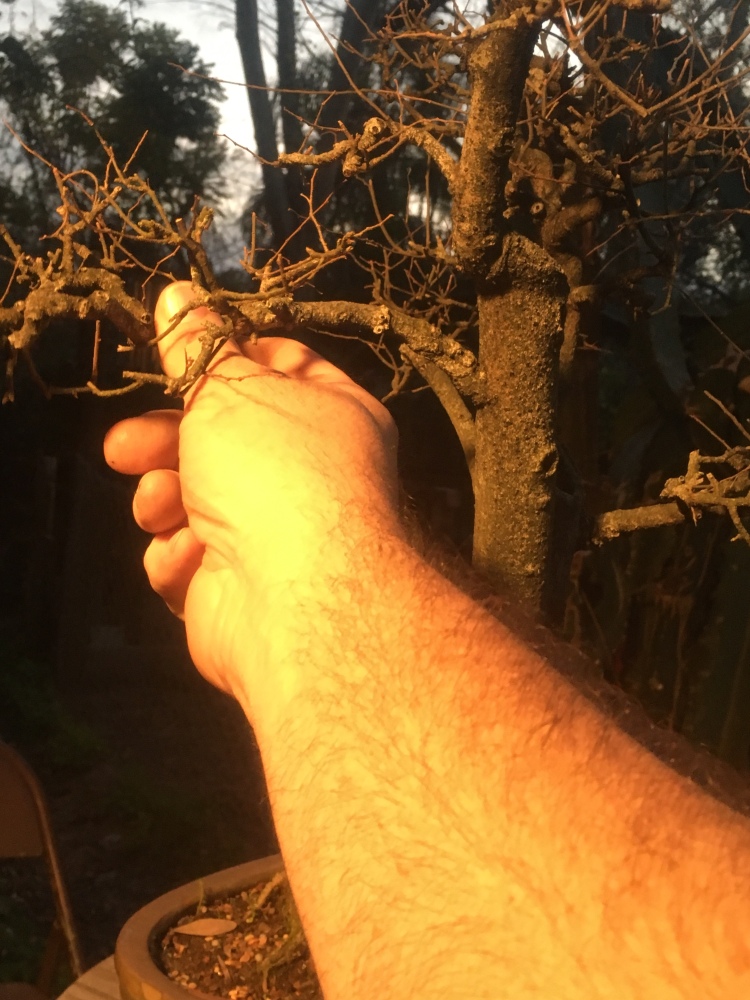 But…..not that bendy. I broke off this branch doing the same thing above, trying to get a similar pic.

I’m not afraid to admit it. I’m not proud, just honest and willing to admit when I’m clumsy.

Not when I’m wrong, mind you. No man will ever admit when he’s wrong. It’s in the contract.

But I can admit when I break things. Especially if there’s photographic evidence to implicate me. 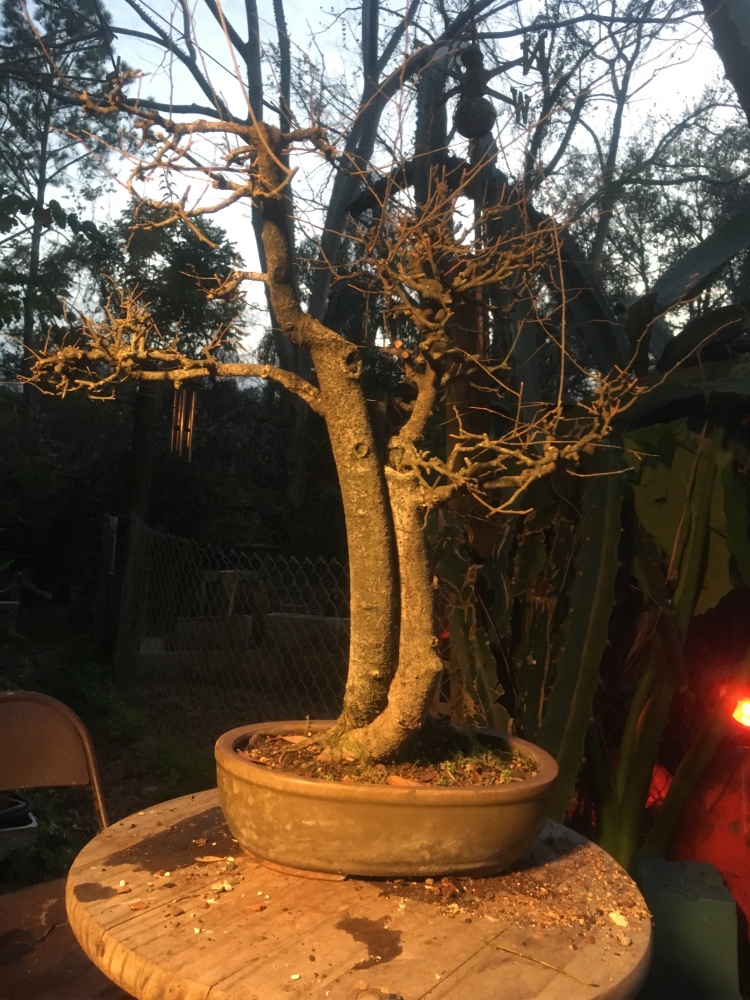 The smaller of the trunks is a bit too tall, so…..

…….as they say, the first cut is the deepest…

It’s a little cool tonight, and chucking the cut ends in a fire makes for easy cleanup.

Mid summer I plan on doing some carving out on these old chops. Make them look like a hurricane ripped out the tops.

The one drawback to a hackberry, as some people say, is that they don’t close old wounds.

It’s true, they don’t, but, as with all things, you just have to work with what you got.

That’s why carving a more natural looking scar is the better artistic choice. 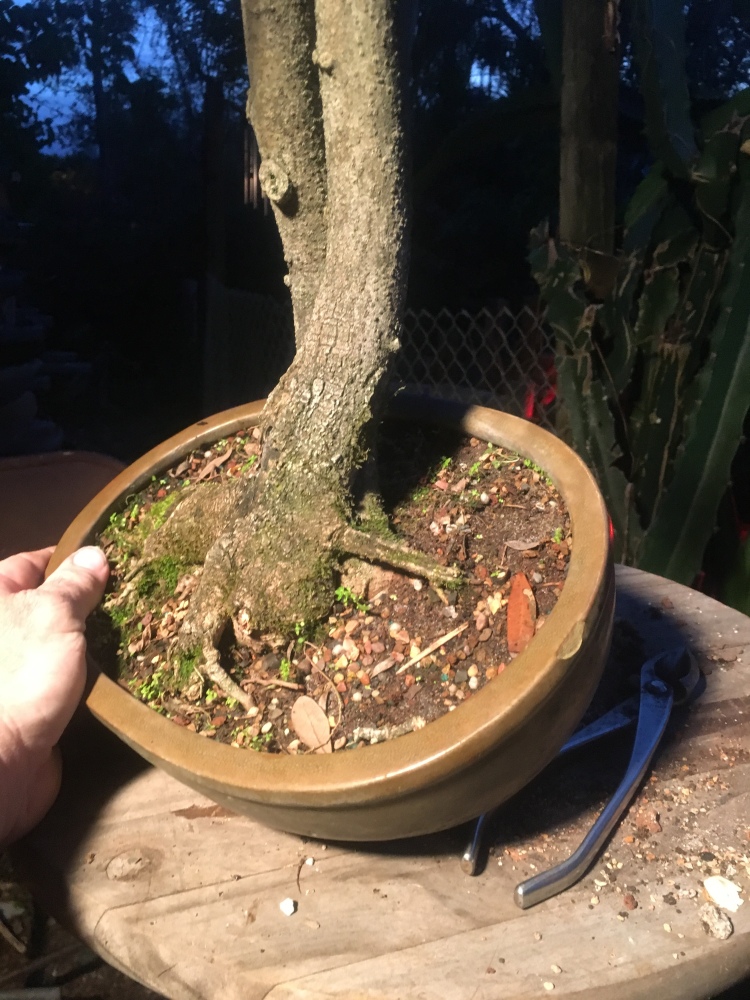 Let’s first get it out of the pot to see what’s even possible with the roots. 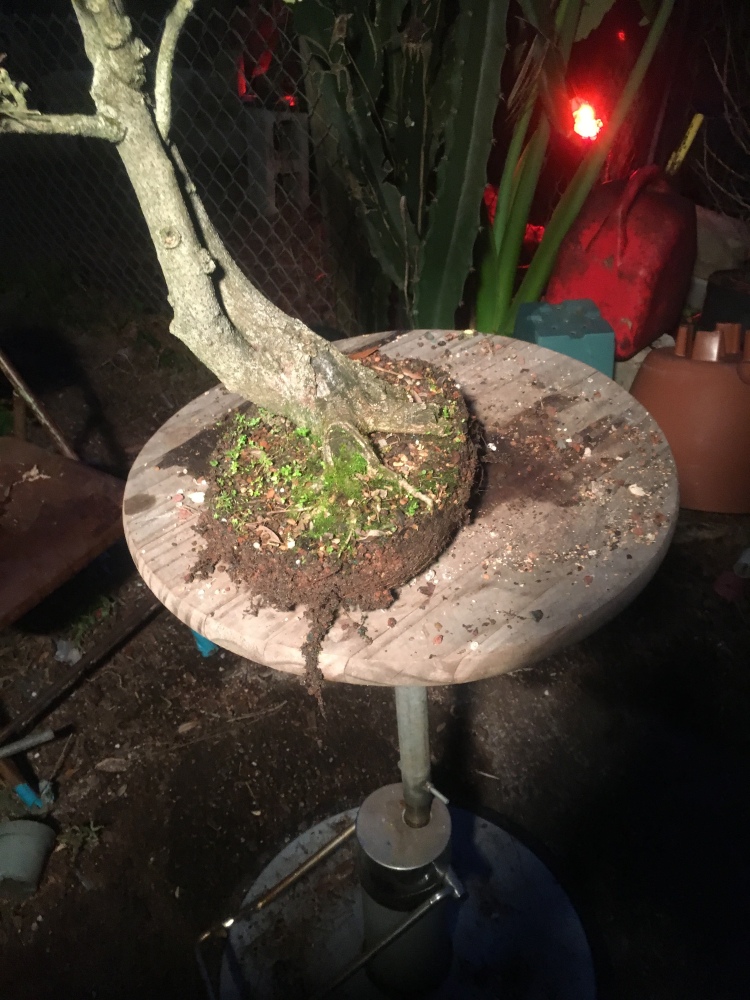 I’m not sure when it was repotted last.

But those roots look fine. Pun intended. A little tousle and a slap. 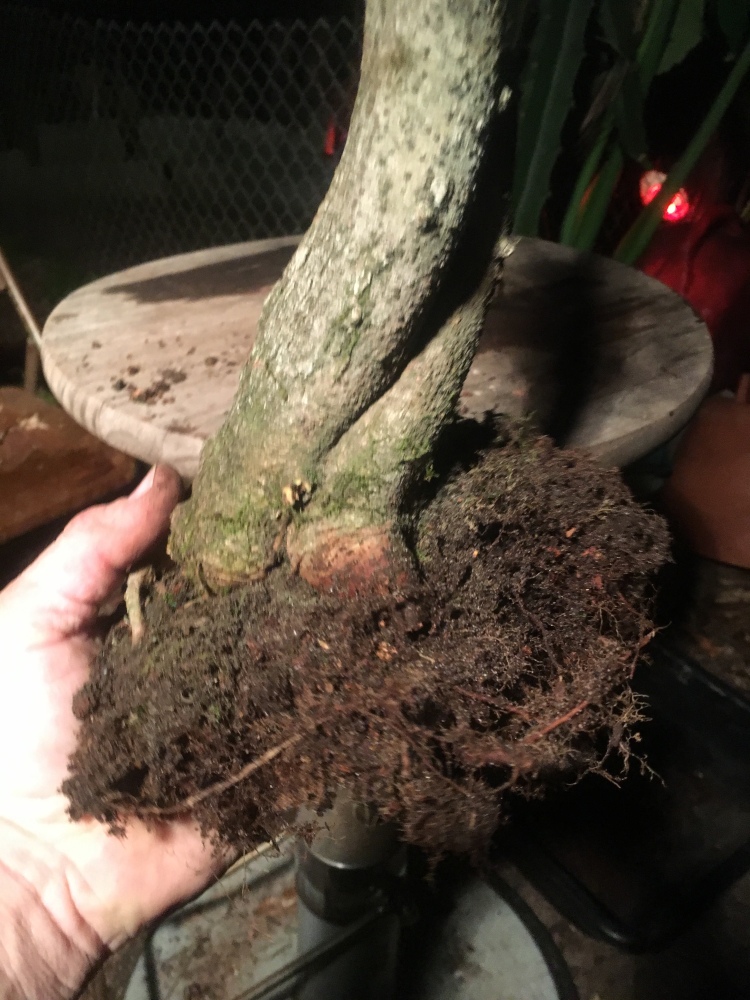 Run my fingers through its hair…..roots.

I think I can have my way with it. 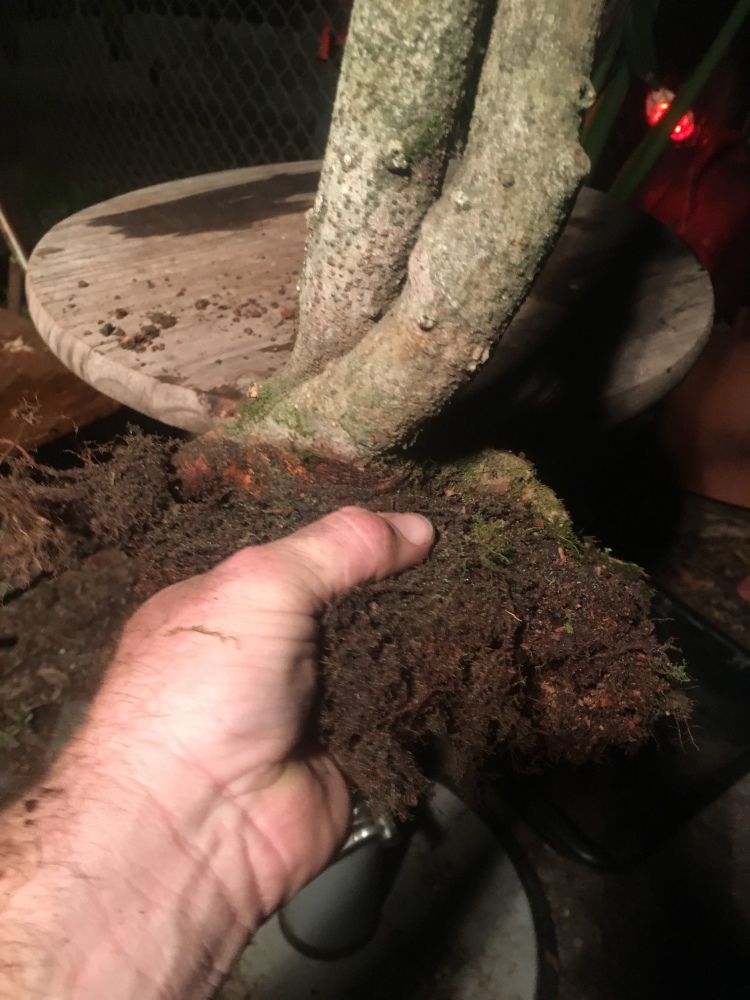 Any which way, but loose, that is.

But what is the best front. Hmmmmmmmmnnnn.

Here’s the pot I chose. It was made by one of my studygroup students, Pete. 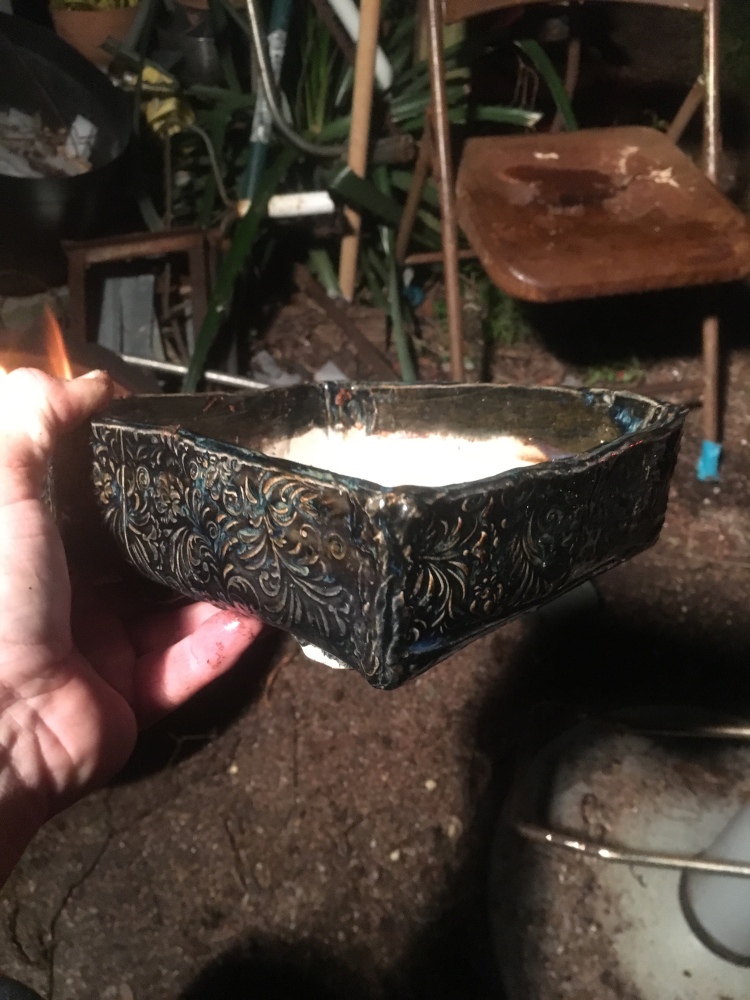 I love the shape. 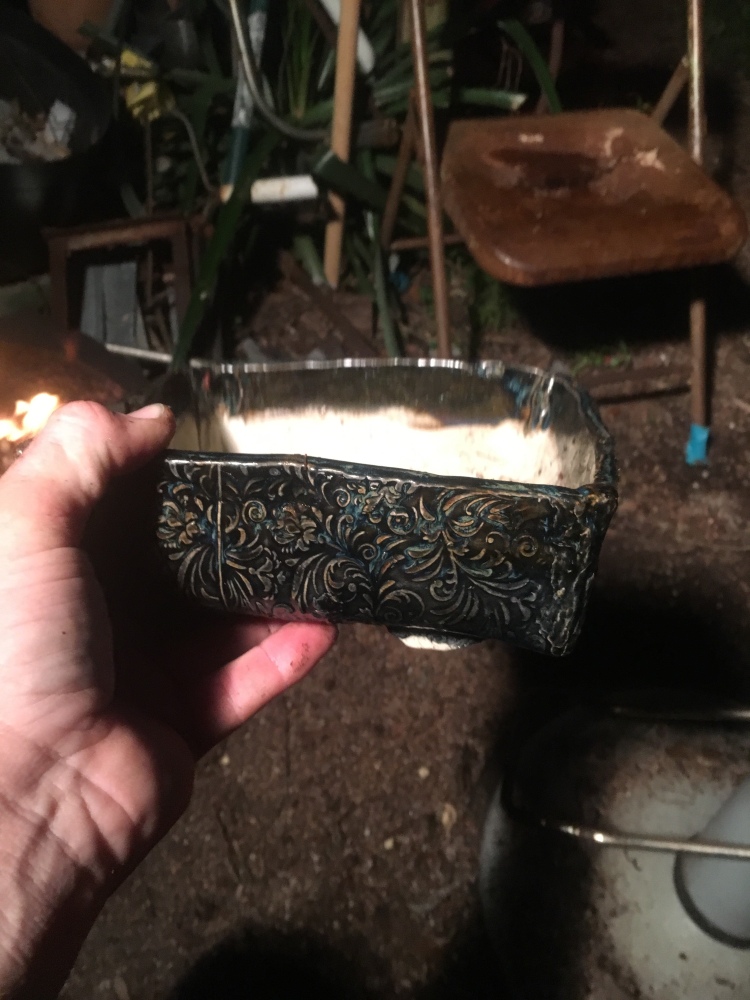 And I think it’ll go well with the design I have in mind.

The texture is spectacular. I’ve not seen anything like it in the bonsai world.

I think they call that pattern “paisley”. It I’m not sure. Perhaps we can get a reader to educate us.

The glaze is one of my favorites. There’s a Japanese word, (I can’t recall it at the moment) for the glaze, but it’s a brown and blue and white mixture that changes qualities depending on the clay body.

What’s important is that, though it’s not a “perfect” shape (which is on purpose) it still sits flat on the bench. One of my pet peeves are rocking pots. Learn the clay first, potters. Then learn to glaze.

And, being that it’s not a perfect shape, it looks even better using it in an unconventional way: with a corner as the front.

I do realize that this is a no-no, especially in heavily Buddhist influenced cultures (or at Disney, where you get in serious trouble for “pointing”) but I’m an artist, and the lines work. Sometimes Art should make you uncomfortable.

And I do believe this is the best front. It’s the widest view, the roots are going into the soil in a stable and natural way.

I’m in love with this tree/pot combo. It looks good all around……

From the front, the left, the right.

This is the definite “not front”. 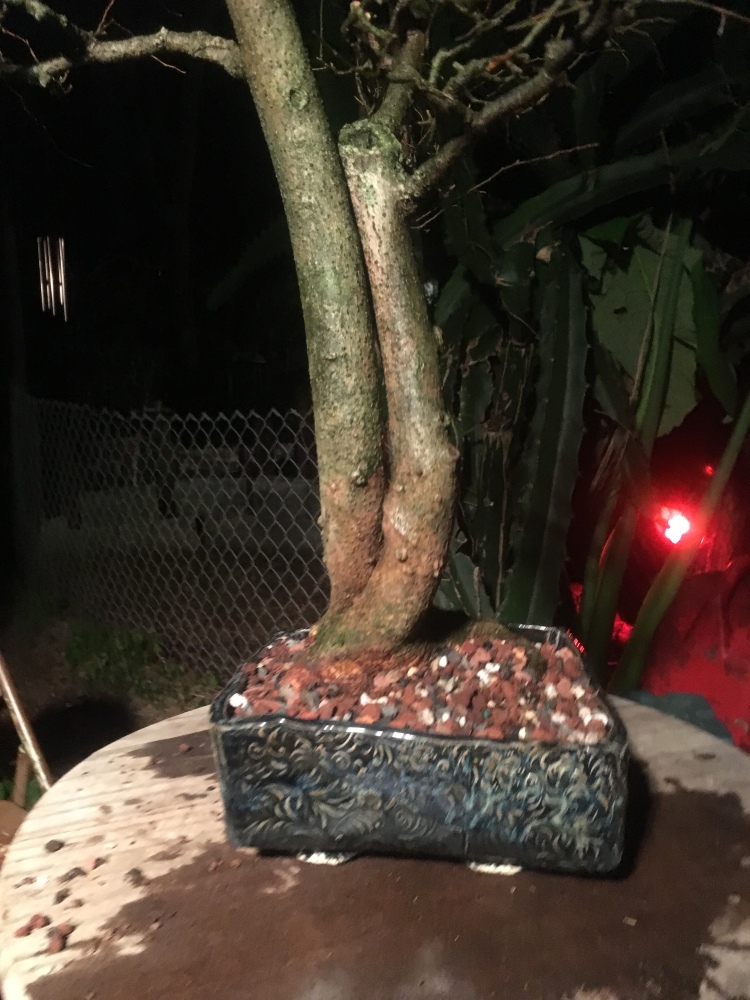 Now, to prune it. After I acquired it last May, I just let it grow, as evidenced by those long shoots below.

This strategy, allowing a tree to go Wild the year before you plan on hitting it hard, is an important horticultural technique.

It’s not an easy thing for those people that want perfect trees all the time, or the impatient people that are constantly picking at their trees, but letting a tree grow, getting big leaves and long shoots, helps that tree to create sugars and carbohydrates and, in the case of a deciduous tree like this, to store that energy for future growth.

Now, you’ve seen me work tropical species and just destroy them repeatedly with no rest. Tropical species are more efficient in sugar production, sugar storage, and with their accelerated growth rate, can replace anything I remove and manufacture sugars quickly, and not miss a beat.

Deciduous trees, not so much.

They go dormant in the winter and need stored energy to push new growth in spring.

And, to compliment that idea, now is a good time to do deciduous work, before the tree uses that stored energy with the new spring growth coming out. If a deciduous tree has popped new growth, it’s best to wait until that growth hardens off, and has a chance to make some more energy, before doing a styling.

‘Tis time for some scissor discipline. 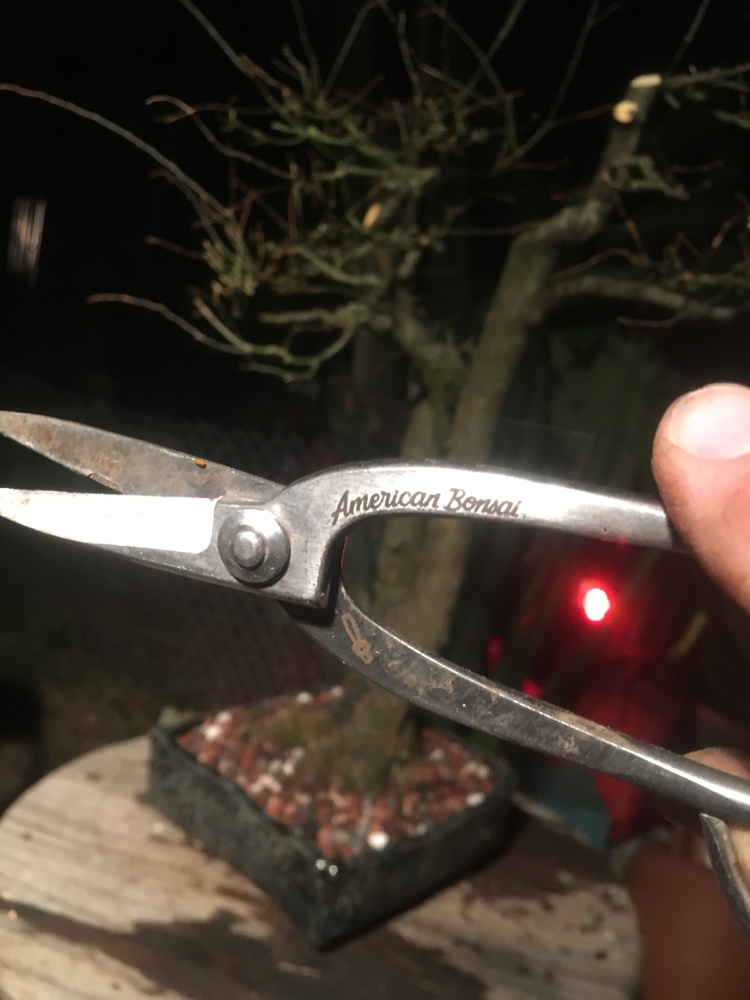 Yes, that is a chainsaw laser etched on my scissor. 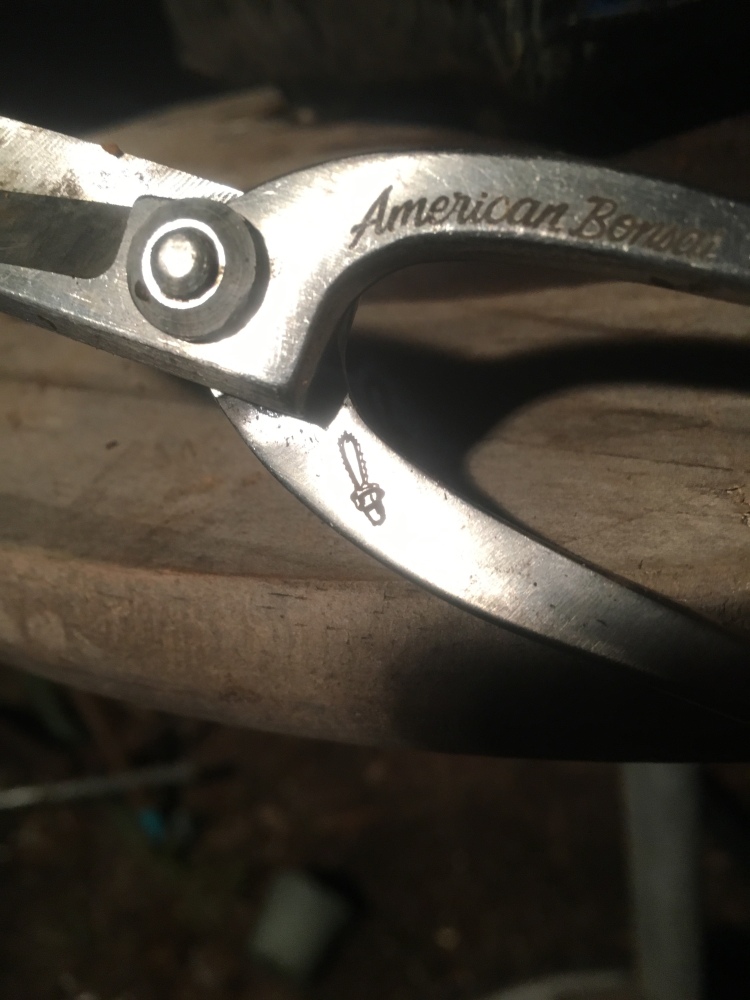 The boys at American Bonsai felt I needed something to distinguish my tools from everyone else’s. They’re always looking out for me.

The first things to prune off, on any tree, are, logically, the dead tips and die back.

Which is easy to tell which is which, on this tree.

Brown is dead, green is alive. 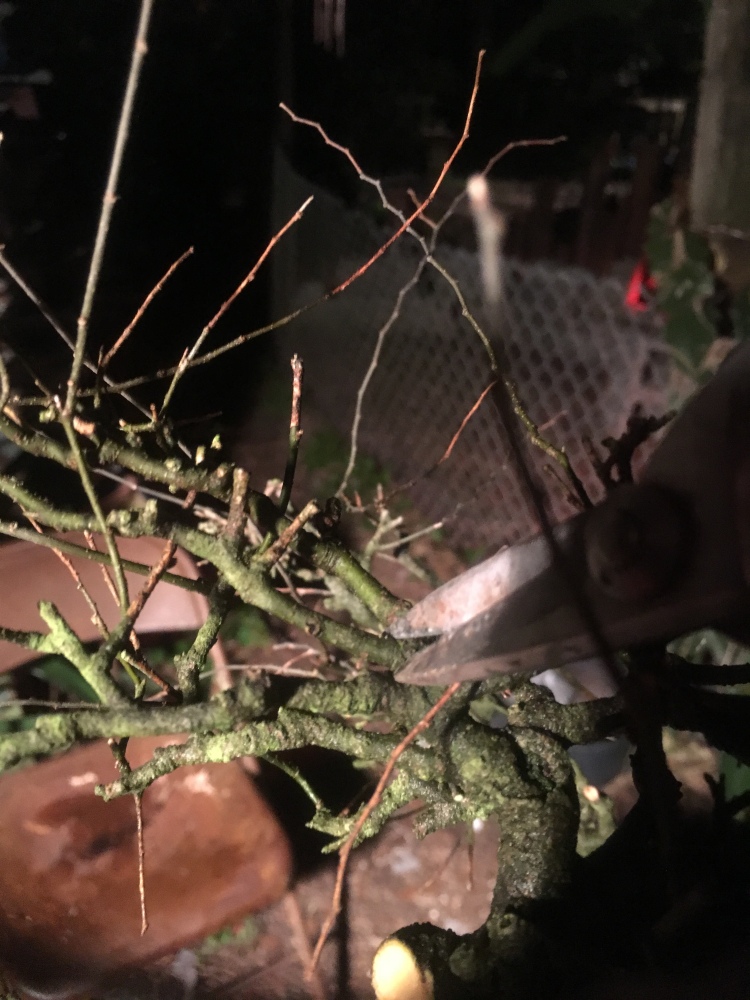 The next step is to remove the crossing, multiple, and superfluous branches.

And that’s that. Quick work (I know, easy if you’ve done it before). 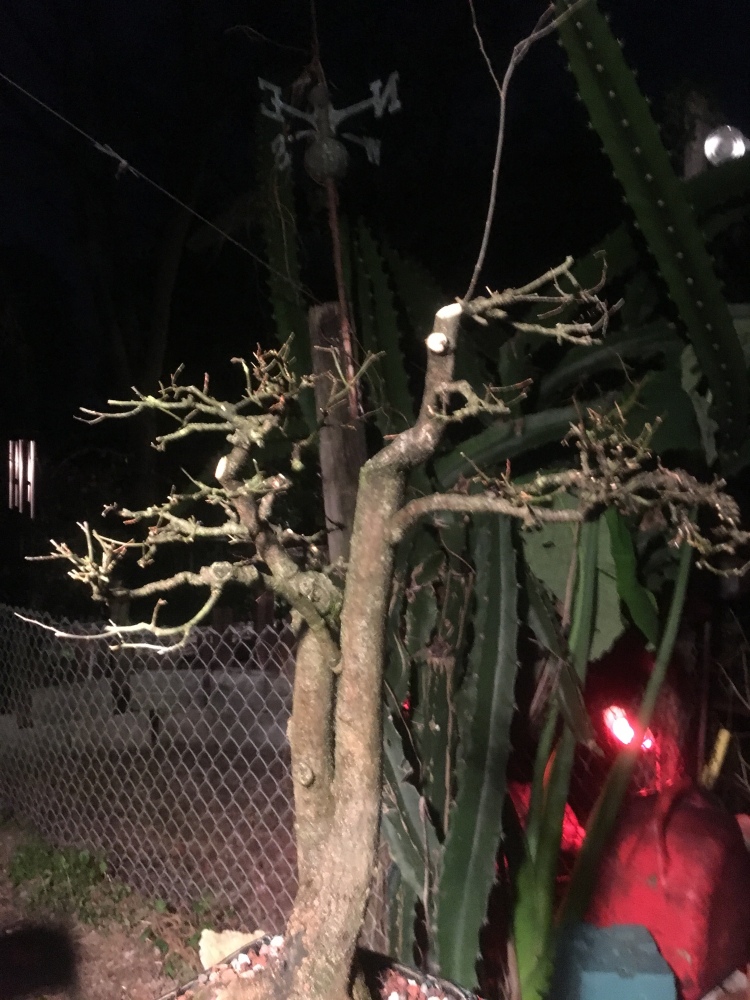 Thinking about the future for the tree, I need new shoots from here (that’s the branch I snapped off)

So what I do to promote new growth, is to leave a nub, which keeps a thing called the branch collar, intact, which is where the meristematic tissue is concentrated and from which the new growth emerges the quickest. Let me illustrate:

At the junction between the branch and the trunk we have the branch collar.

It’s sometimes a raised ridge. When you prune a tree in the landscape, Dr. Shigo tells us we should cut at the outside, but right up to, the branch collar (google Dr. Shigo).

This allows for those meristematic cells, which are undifferentiated and, therefore adaptable to what the plant needs (with roots or branches or callous) to do what needs to be done, which would be to heal a cut in the case of the landscape tree.

In this case, with this tree, we cut and leave a small nub. 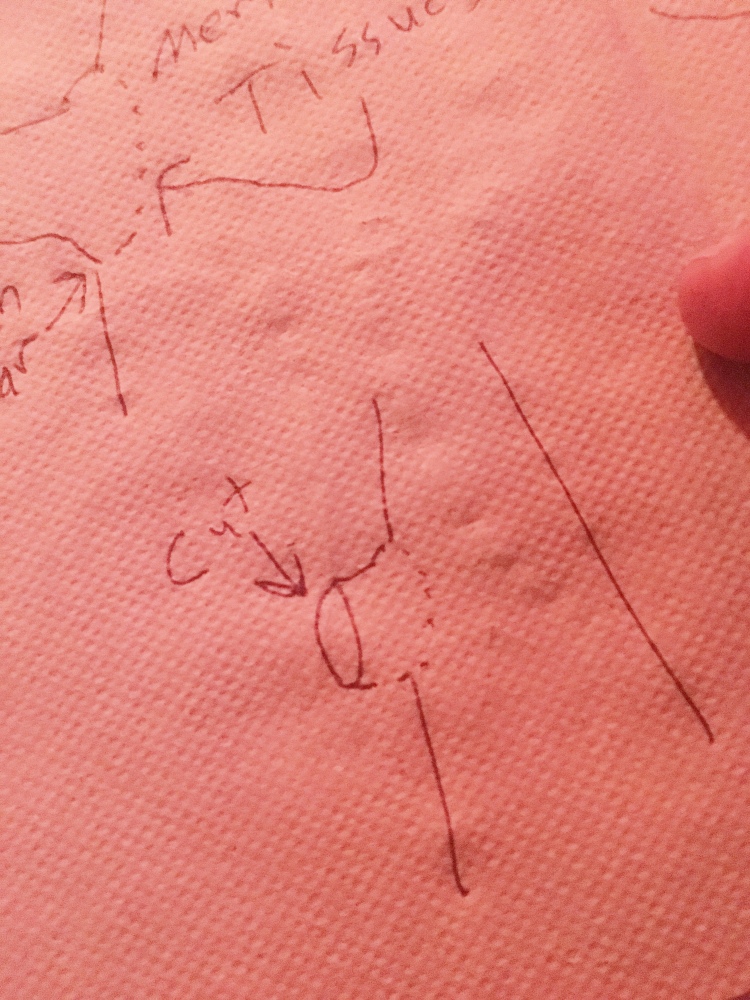 In our tree, we want a new shoot. So by leaving a nub, it most often causes a new branch to form on the underside of that nub. I’m not sure why the underside, but it does.

Some trees, like a ficus salicaria or a Chinese elm, will push new growth from the cut end. So you don’t need to leave a nub, as it’ll put multiple new buds from a flush cut (sorry Dr. Shigo, but cultivated trees sometimes don’t fit into a theory).

And then we have beer.

Now is the time for the wire. 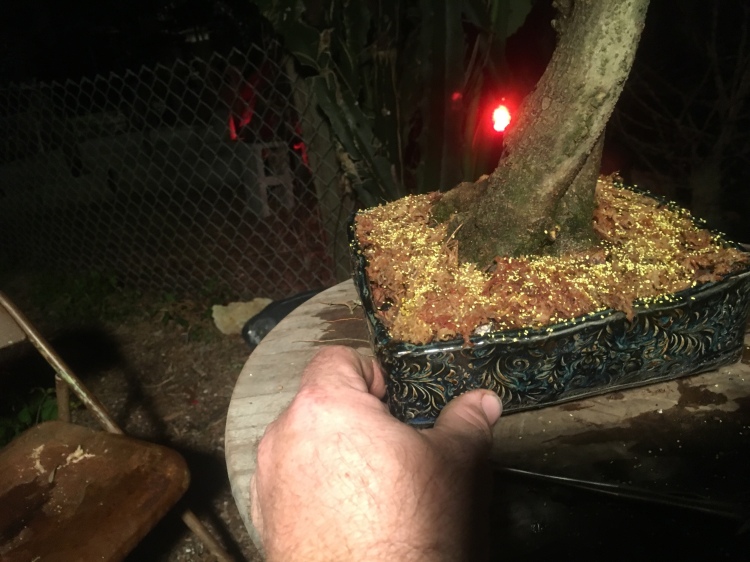 Just two short lengths, in this case, believe it or not. Gene did such a good job working the tree, I don’t need to move anything.

That chop had left the top empty, so, by moving that back branch forward and over, we have a top now. Like a comb-over 1970’s style.

It’ll fill in quickly, a hackberry is fairly apically dominant.

The straw colored stuff is sphagnum moss. It’ll help the tree retain moisture in the coming dry season (this winter has been cooler and wetter than usual, but spring is mostly dry right up until the end of May, when monsoon comes)

I can’t help it, I’m totally digging the pot and tree pairing. Is that wrong or should I wait for approval from the Gatekeepers of the Status Quo before saying that? 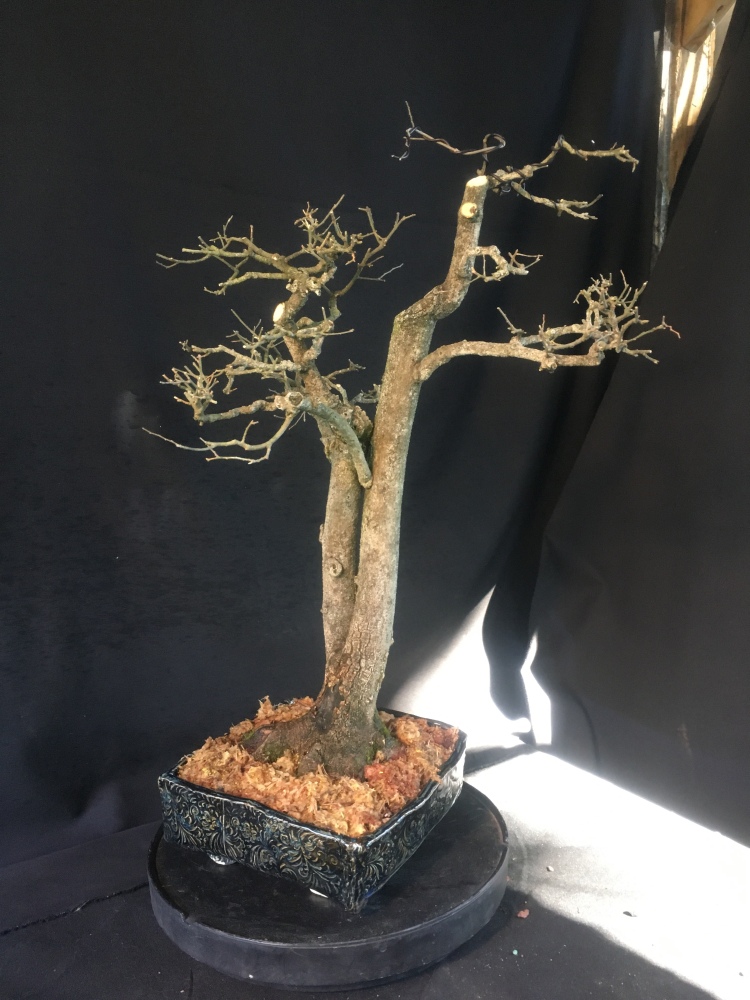 And that’s all I have to say about that.

I’ll update as usual, I think you’ll be seeing pics of this tree so much it’ll make you sick.