Here is a podocarpus I had carved as a demonstration for the Brevard Bonsai Society in Melbourne Florida. Some of you may recognize it.

This was one of the first trees I ever collected. I got it when the CFBC went to a members house (Sigrid) to remove plants that were going to be bulldozed.
When I first carved it I thought it would look ok with just jins but I’ve since changed my mind. 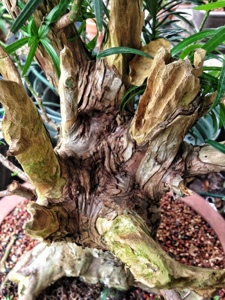 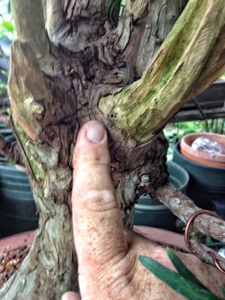 What is surprising is this bark is all living. On a podocarpus the living bark will grow anywhere, it doesn’t need a bud to feed it. Unfortunately it is also twice as hard to carve living, wet wood than seasoned wood. Yippee…..

After days of gnawing away at the tree…….are you kidding? 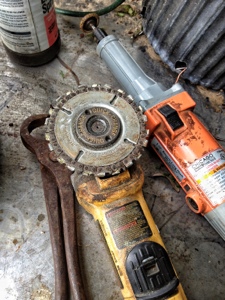 We go to the big boy toys for this baby!
That’s an angle grinder fitted with a chainsaw wheel made by King Arthur Tools. When people see it they are a bit intimidated. They should be a little. An angle grinder is a heavy tool. It can wear you out quickly. I don’t recommend it for everyone. And the chainsaw wheel looks really dangerous but it’s actually safer than some of those fixed blade attachments for either an angle or die grinder.
The “chain” on this floats between 2 discs giving it the ability to “slip” when it hits a snag. This minimizes kickback and therefore unintentional face carving. Plus the teeth on the chain are the same as on a regular chainsaw. Which means that in one pass the tool can only cut a predetermined depth (due to the shape of the tooth; it has a limiter built in as a safety feature).
It is dangerous still. It just takes practice and stamina.

Anyway, 2 minutes later, we have this ruined mess. Let’s hope I can fix it. 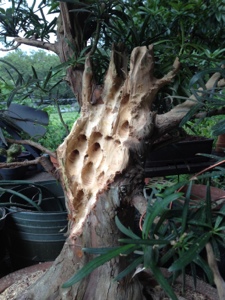 Some blocking and shaping with the die grinder and a 3/4 inch flame shaped carbide burr. 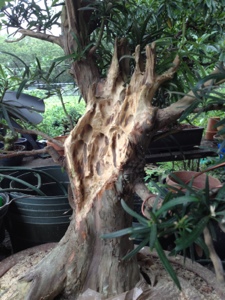 A little shaping with a 1 inch rotosaw. 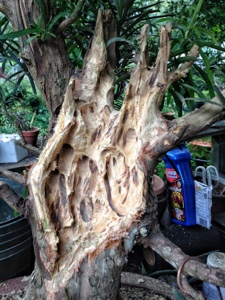 The detail is not bad but the shape is wrong. It’s still too wide and bulky.

That’s better. I ground down the left top edge and that gave it some movement. I also burned the pithy fibers off and softened the edges with a wire brush attachment. Plus some detail work.

It’s like I carved off 5 pounds. It’s funny how the lime sulfur is bright orange or yellow and it bleaches to white. 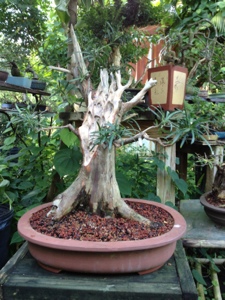 And some detail shots: 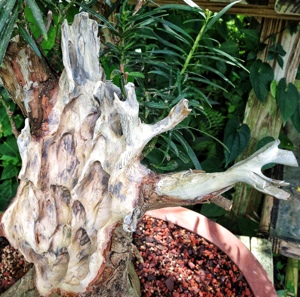 It might need more thinning on the right side but I need a little distance and time from it. To “see” it again. Right now I’m still only seeing the details.
Tell me what you think.