So, people…
I must say that, as there are more and more serious bonsai-ists out there trying their best to turn Bonsai into an industry, even into a Big Business, with supply chains and professional this and thats, we must not forget that what we are really only doing is playing with little trees.
Really.
That’s all.
And, like most ART, most people wouldn’t pay $5 for that stupid (fill in the blank) that you’re asking $2000 for.
So,take it easy.
Relax.
Have fun.
Whatever dude.
That said, let the madness ensue…..
This month, the NoNaMe study group hosted Guy Guidry, cypress man extraordinaire.

The cast of rogues participating:

Nick, late of the Russian mafia

Hey, look! Jerry made it! Careful, he’s known to go Postal on anyone who crosses him 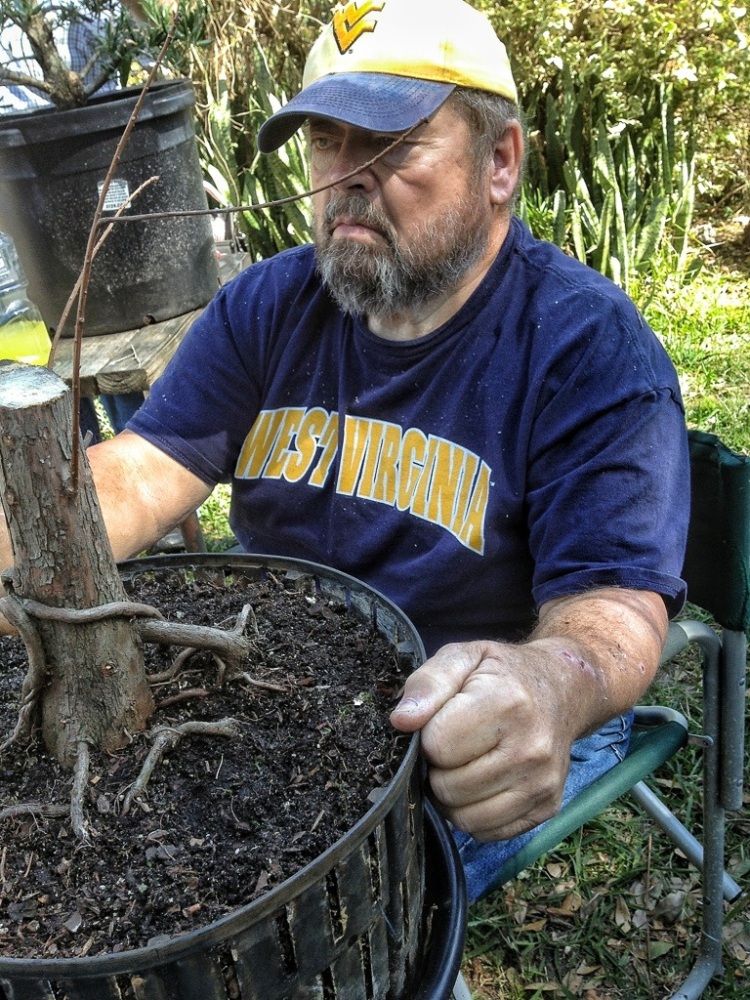 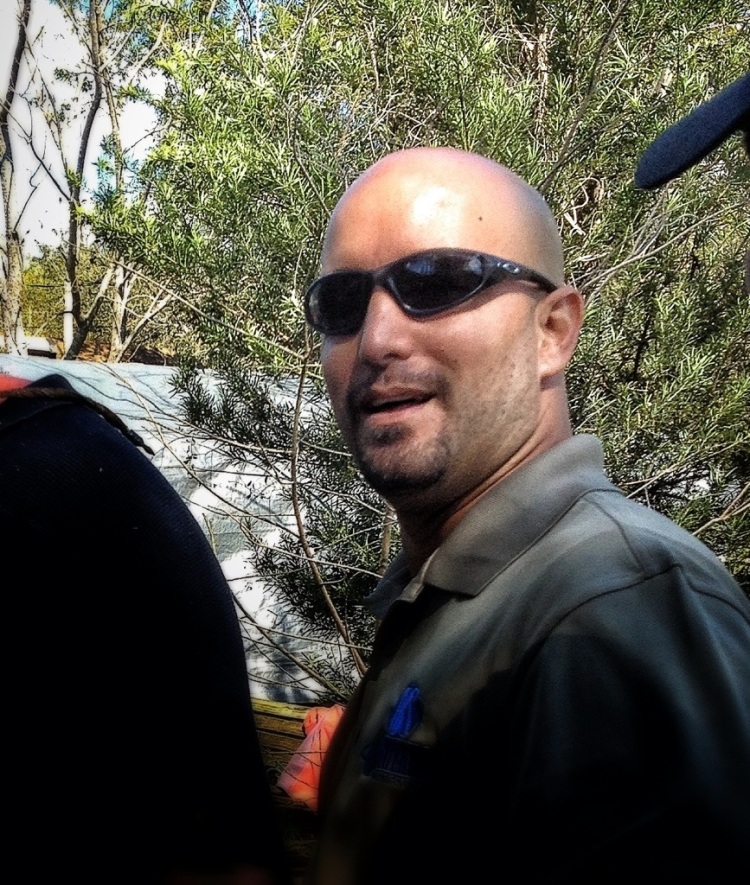 Dave, mi amigo. He gets things done, he’s a Fixer. 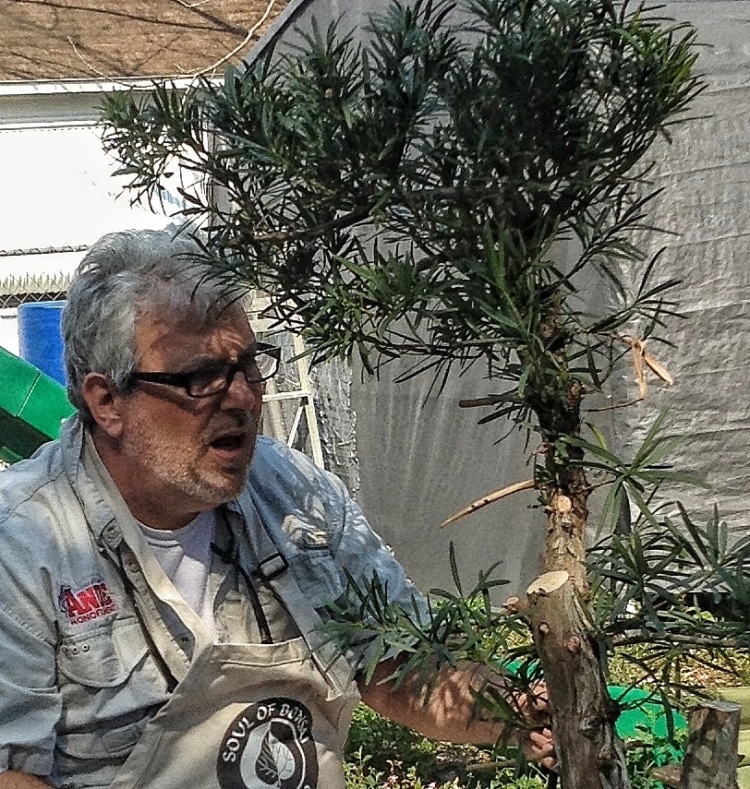 Bobby, knows the Who, What,Where,When and How. 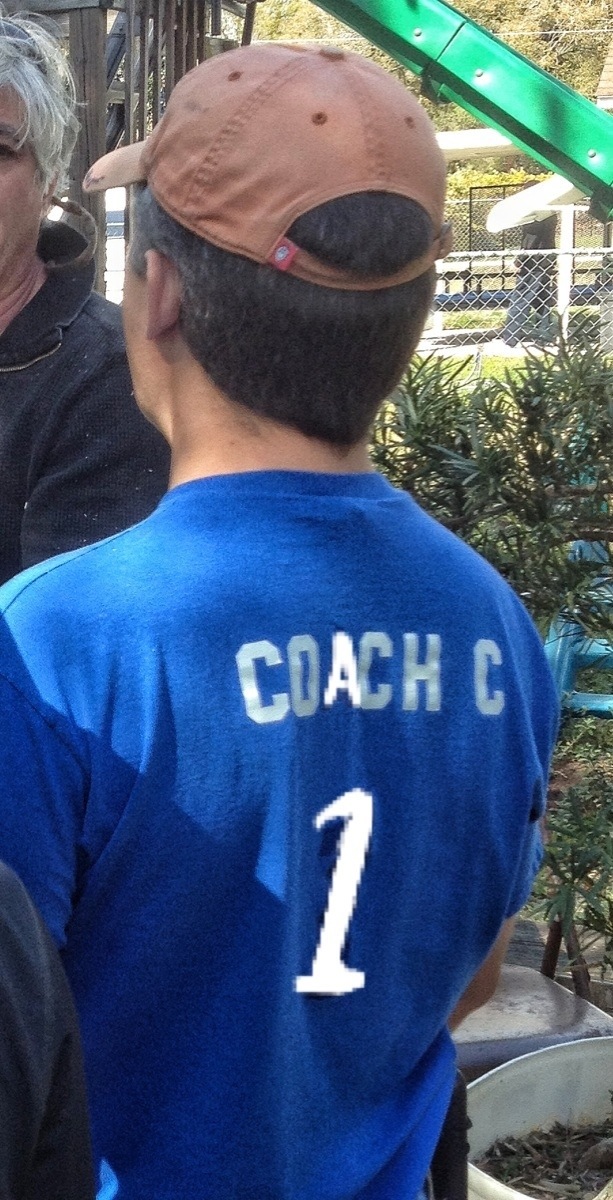 He’s number 1 in my book. Need to get him a new shirt. 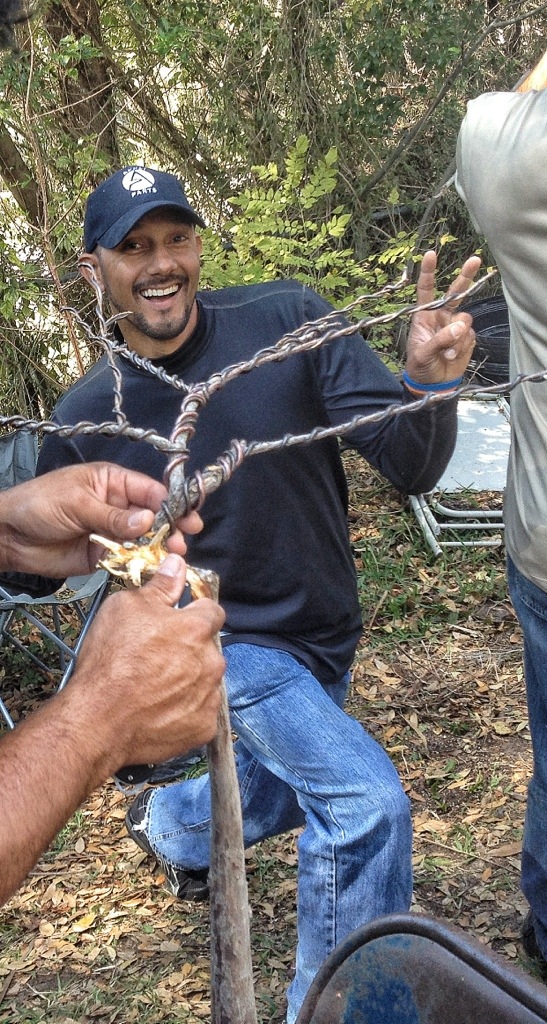 Guaracha! He’s The Collector. Very familiar with The Jungle.

The tree of the day was taxodium distichum. Bald cypress (this is Guy Guidry, after all)
We did have a couple of podocarpus

And some pines, buttonwood.
But mostly cypress. Which was fine by Guy.

There was loads of carving done 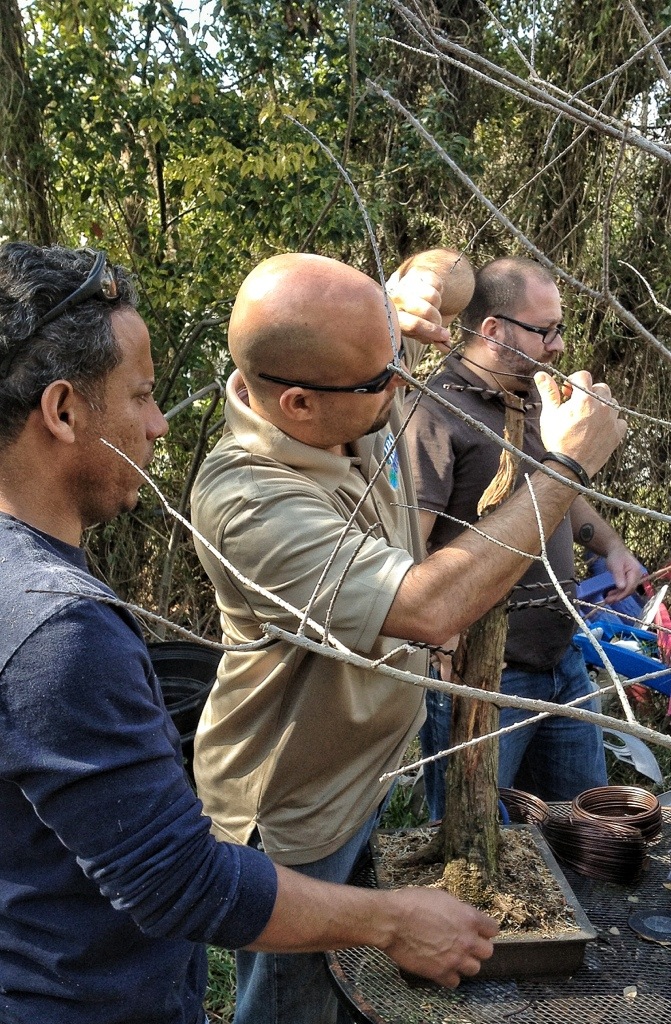 And even some burning 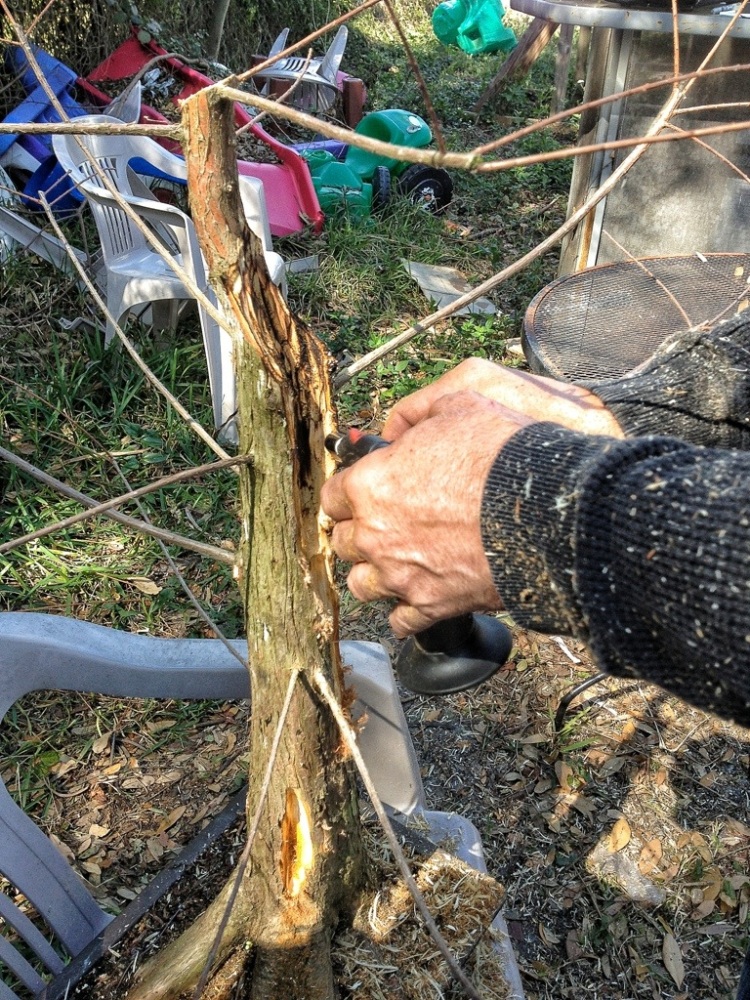 It was quite a day. If you can get him, I suggest booking Guy for a club event or even a private session. His nursery is in Covington Louisiana. And he just opened up a bonsai boutique in New Orleans. Check them out.
He’s been working on bonsai for close to 30 yrs and his depth of knowledge is impressive. And his knowledge is seasoned with experience. He knows his trees, his techniques and his art.
Plus he’s very personable and expressive.
Which comes out in his art.
Here’s one cypress tree, start to finish.

It gets wrapped in raffia and not one, not two but three lengths of aluminum wire. 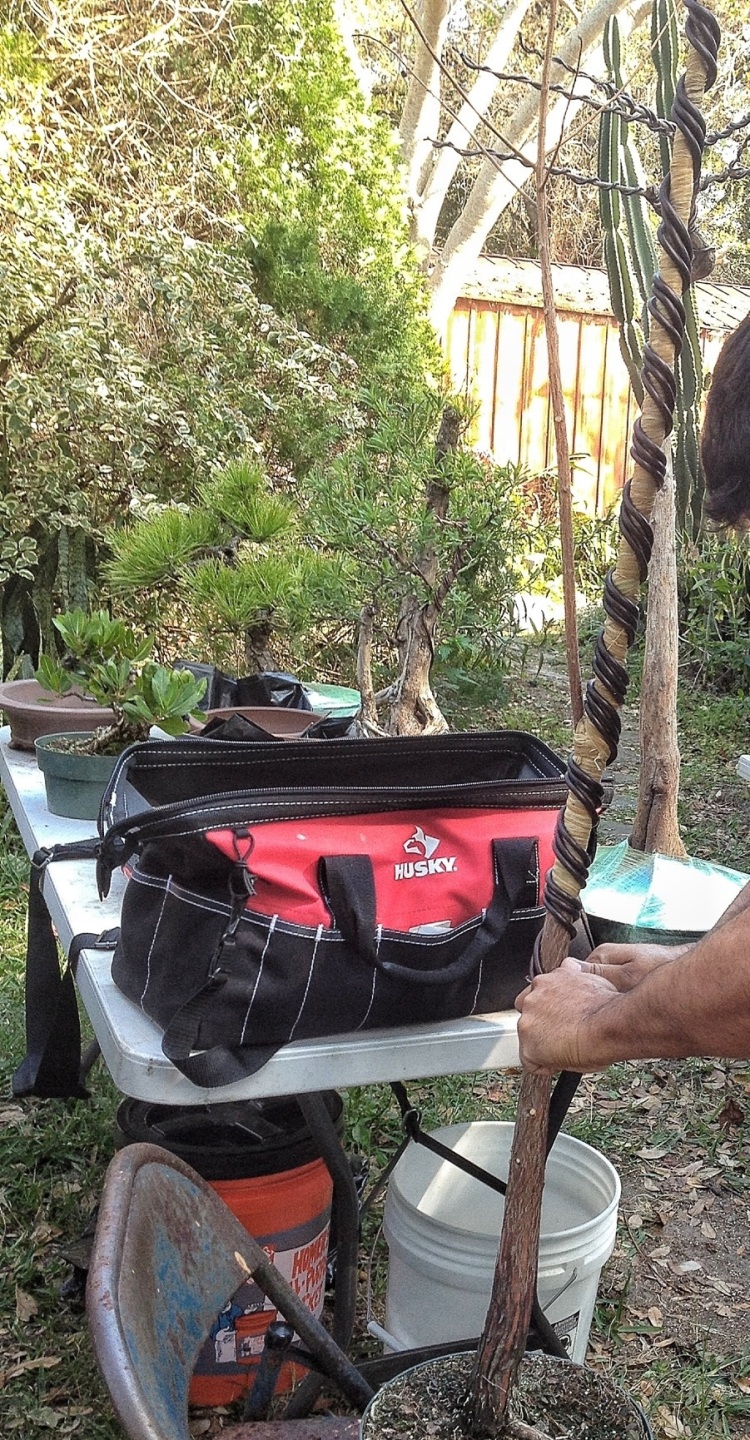 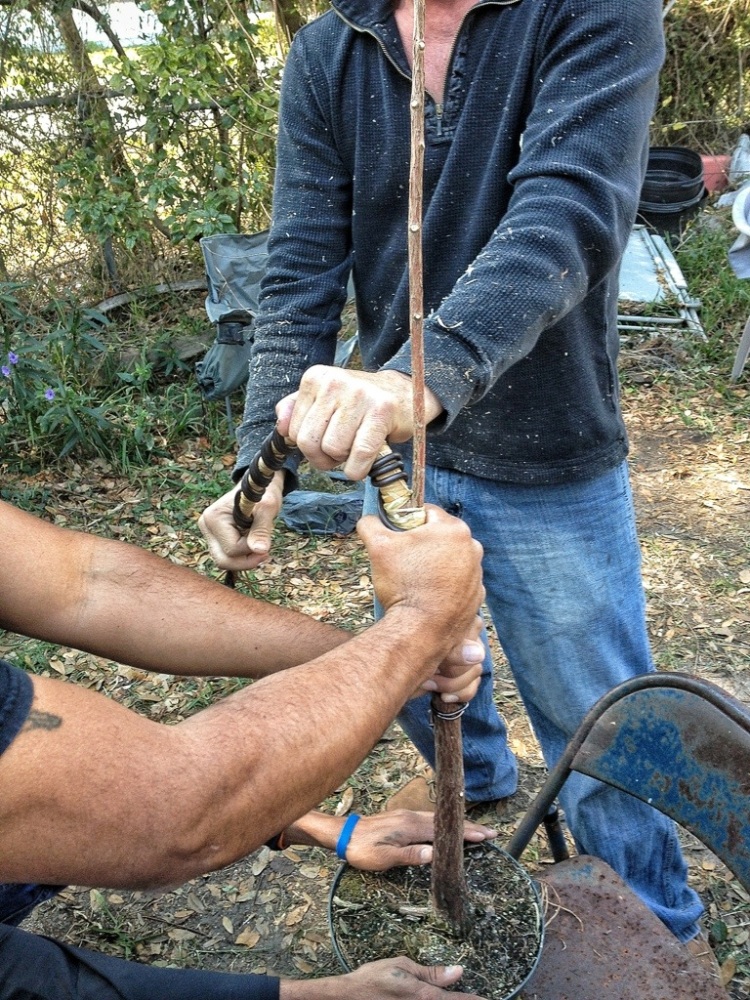 this was the “uh oh!” Branch. In case the main trunk broke. 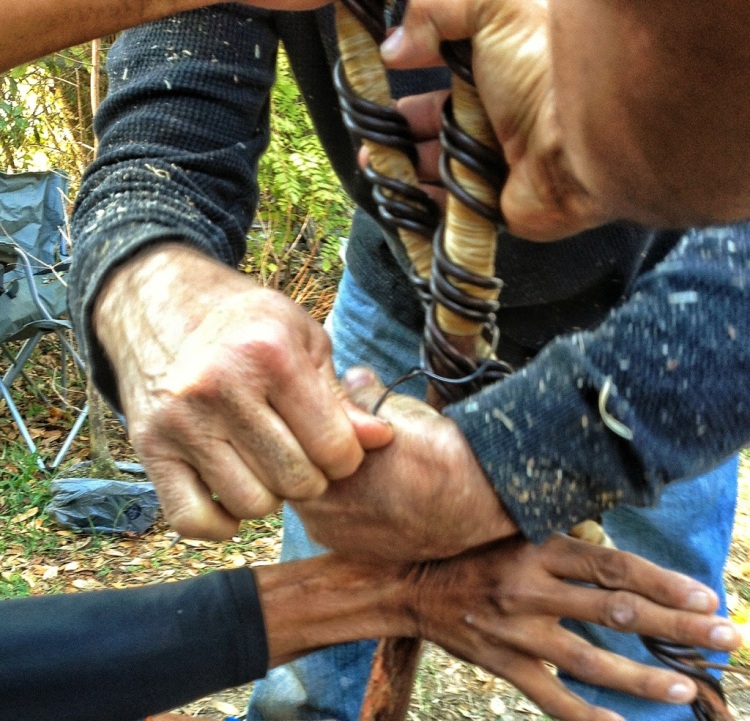 Then Guy tied it off

Then bent some more. 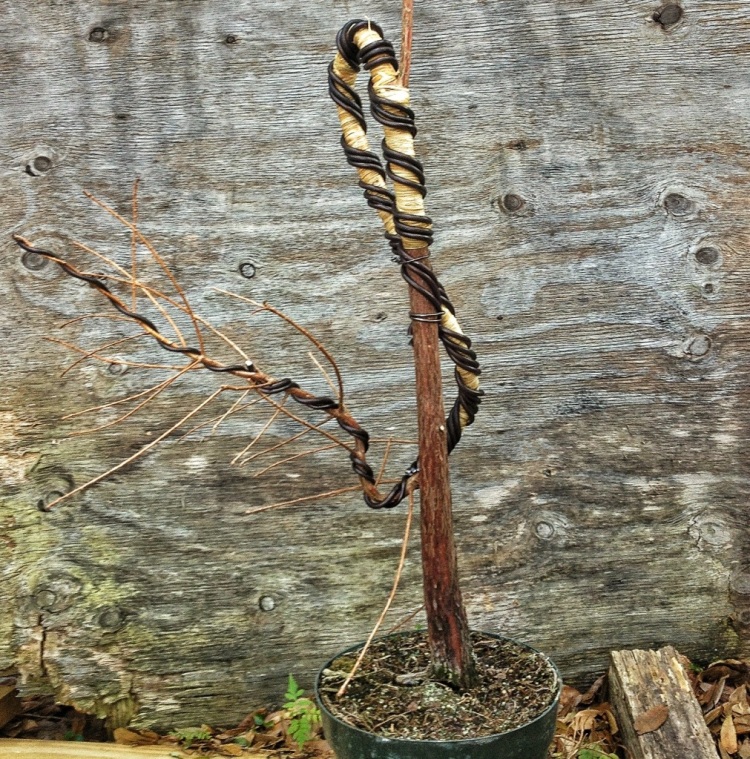 There will be those out there who are going to say “that doesn’t look like a tree, cypress don’t grow like that in nature!”
Well, my friends, they do. Look up Joe Samuels. The logo tree for the 2007 BSF Convention was a cypress tree that existed (see here).
Most old dwarfed cypress look like the next tree though.
This one was nursery bought, believe it or not.

Here is the progression 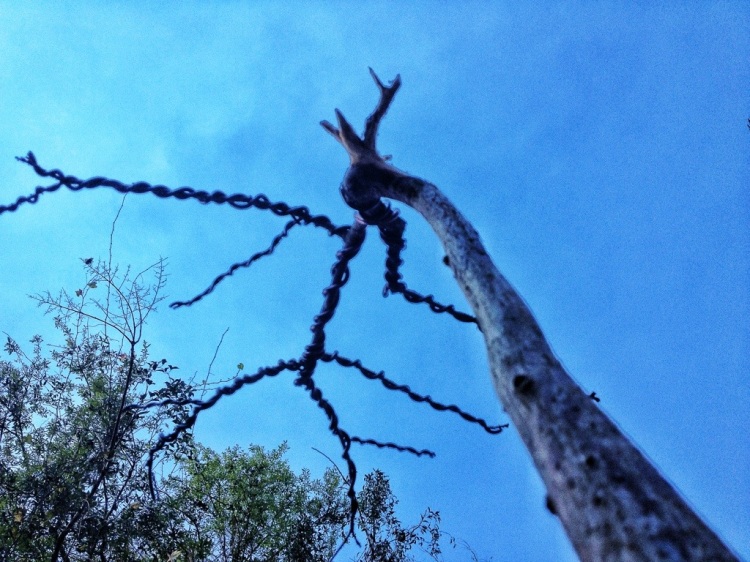 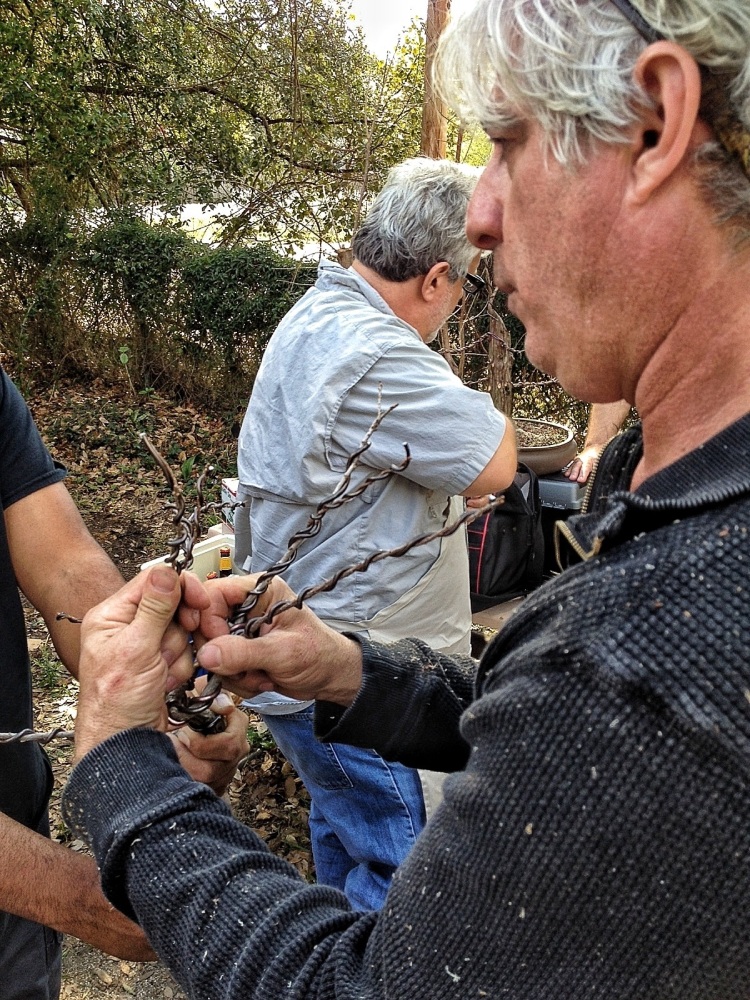 Helluva day. See you next meeting!