This weekend I attended the 2013 Bonsai Societies of Florida annual convention in Lake Mary Florida.
This is what I saw, experienced and learned. At least mostly. Some of the names have been changed to protect the innocent.
First question I have though is this: is a lecherous person called a lech or a lecher?
I was a vendor this year again and I did make some money even though there weren’t many people.
My booth

The three artists were Mike Feduccia, Sean Smith and Suthin Sukolsolvisit.
Since I was a vendor I could only slip away every once and a while to see the demos and workshops.
There was everything from scroll making to big bald cypress; buttonwood, ficus salicaria, and shimpaku juniper.
Suthin had a bring your own tree workshop.
My friend Bobby took that one

I didn’t get good pics of all the demo trees (I know, I’m sorry…)
But I did get one of Suthin’s JBP demo tree

And I got some good pics of his last demo, not a complete set unfortunately but some good shots 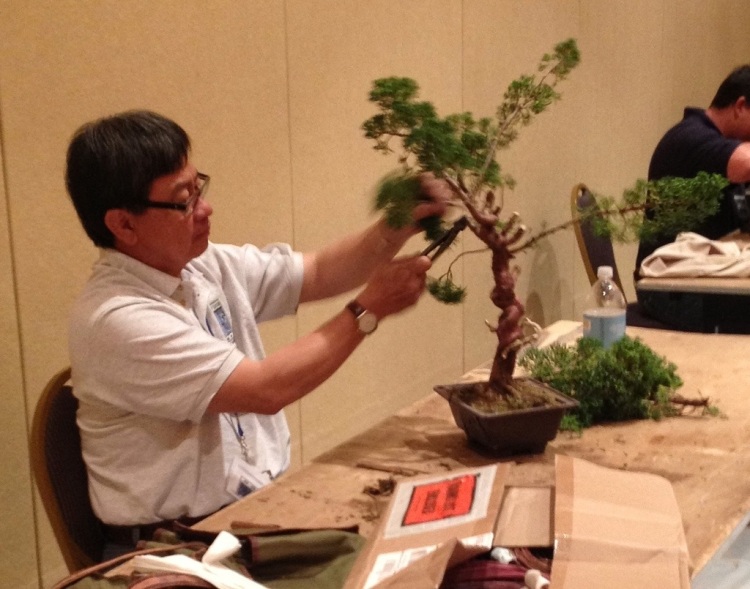 This was a round robin demo. In the back you can see Mike Feduccia and the blurry guy is Sean Smith. He was running around so much I don’t think anyone got a clear pic of him. 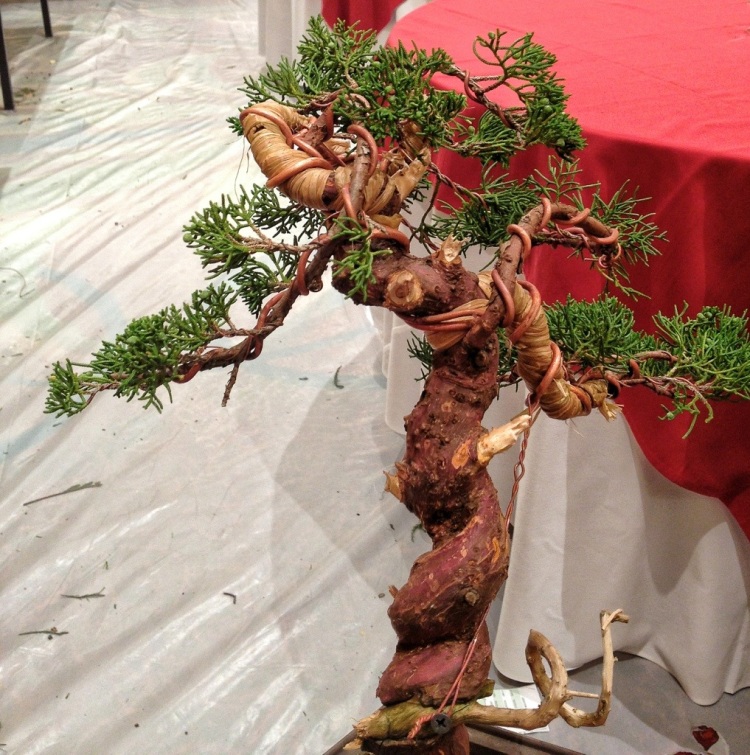 He is, in my opinion, one of the best, if not the best, artists in the country.

Getting back to my booth, I did sell some of the trees I had prepared and blogged on in this post.
Here they are. 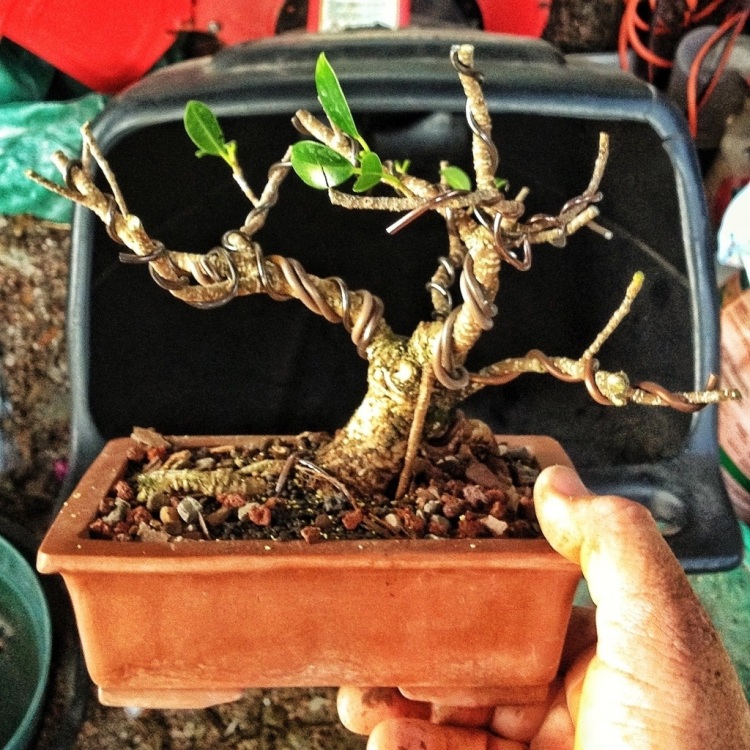 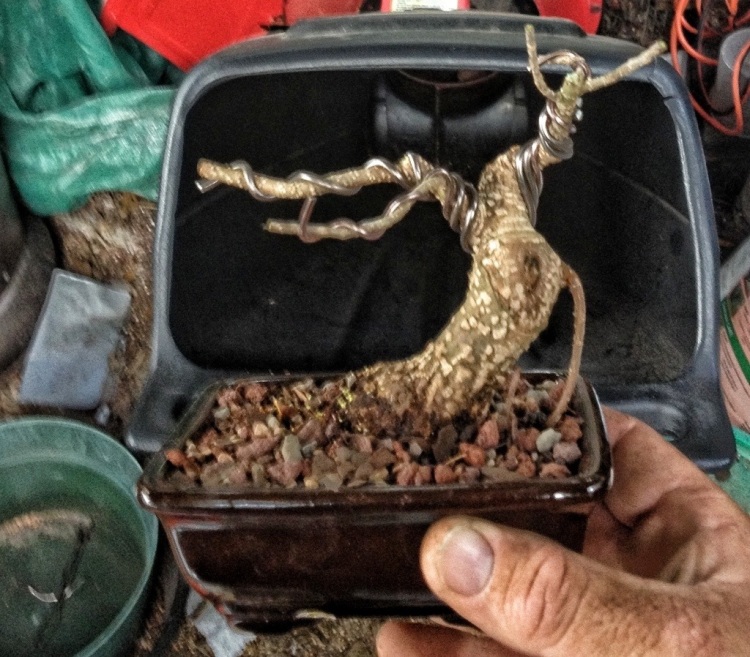 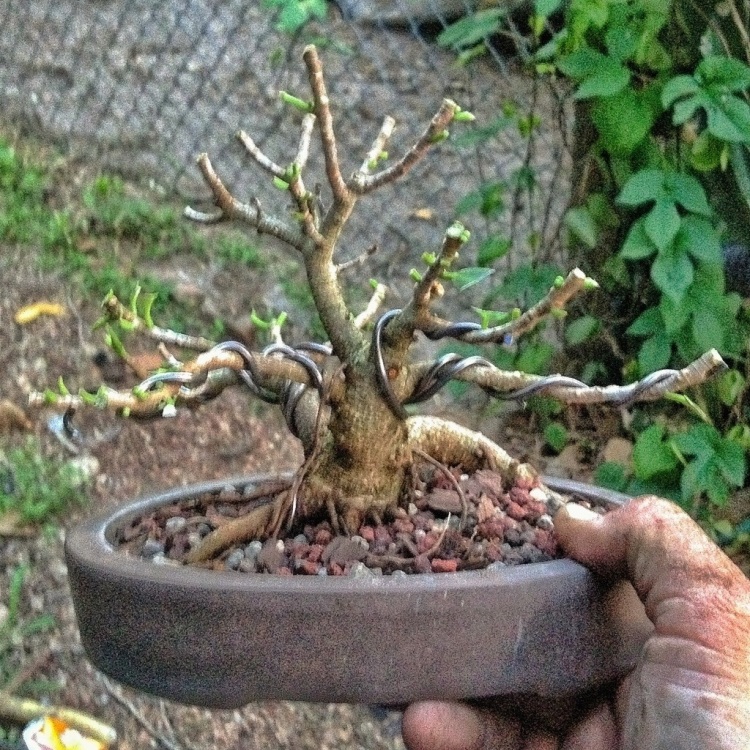 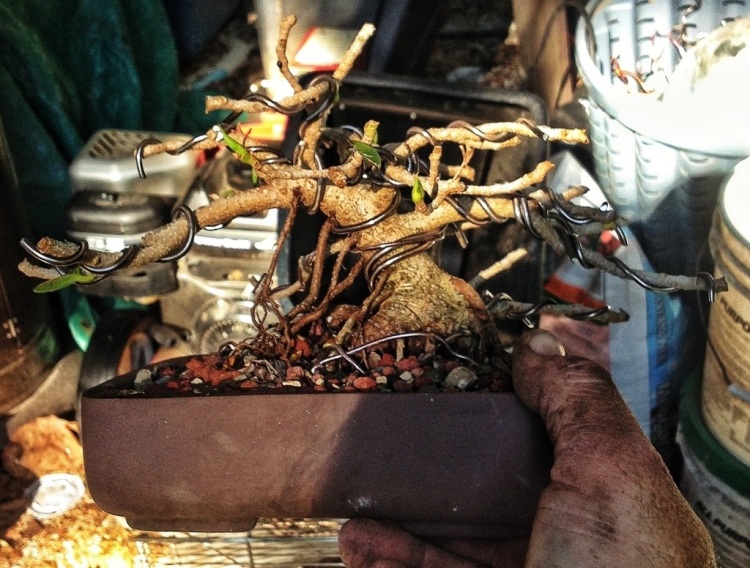 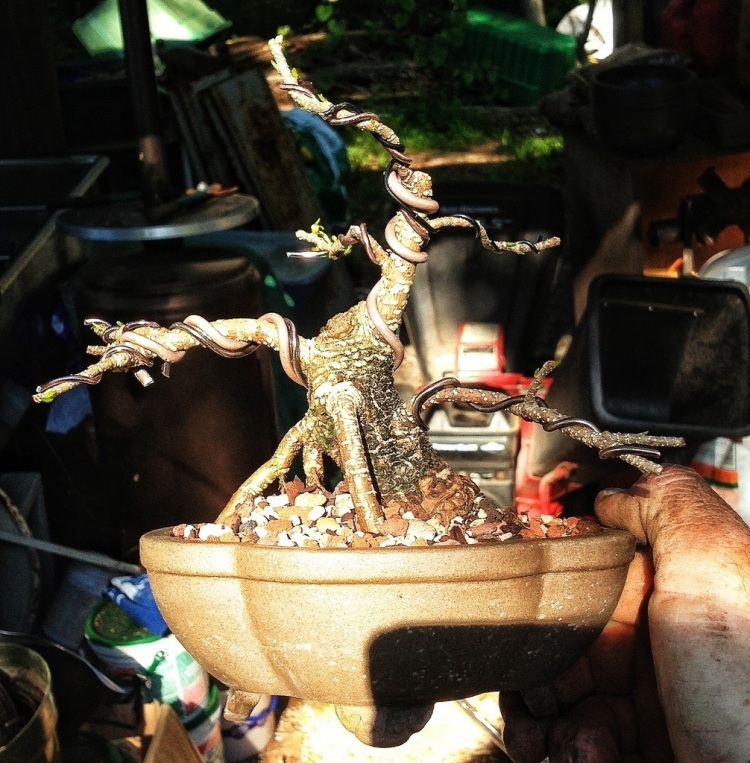 I know there are a few in there I said I wasn’t going to sell but people just wanted them. It is, for me, hard to sell them; it’s like giving up your children.

I did not get a picture of every tree in the exhibit but here are a few
I didn’t touch this pic up at all:
A beautiful bougainvillea

The iPhone camera had a hard time with the blue background and the flourescent lighting.
An example: my tree with my phone 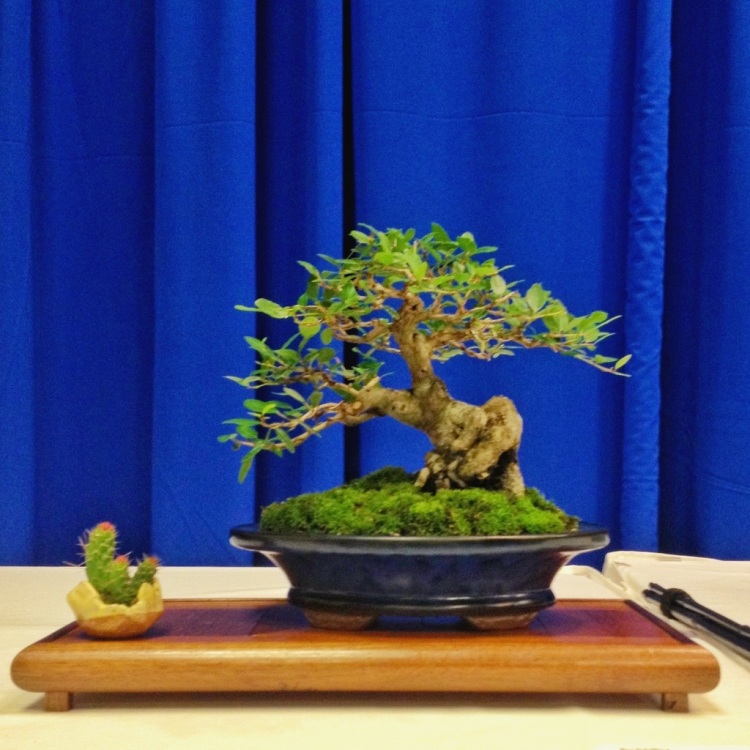 And again by Paul Pikel

See the difference?
Next is a couple of shohin groupings 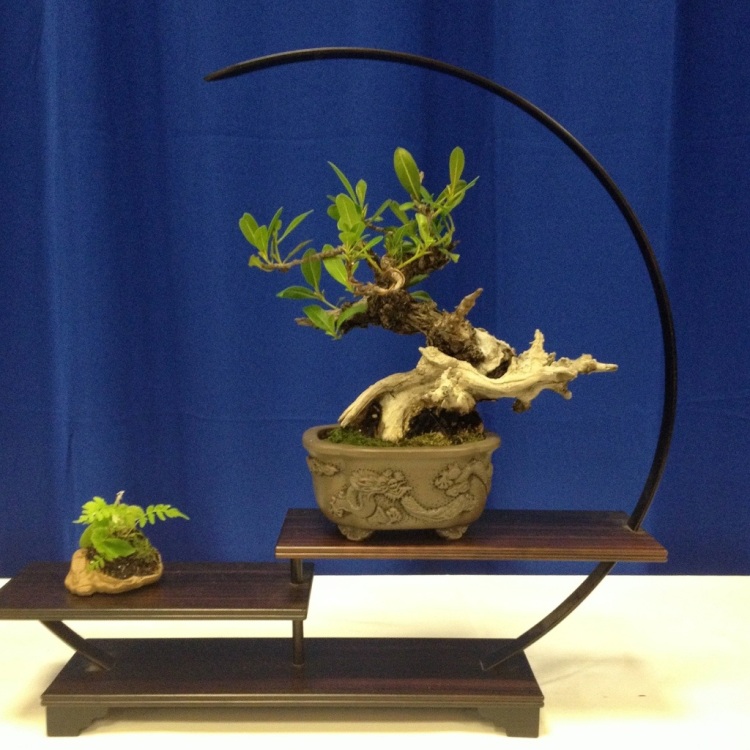 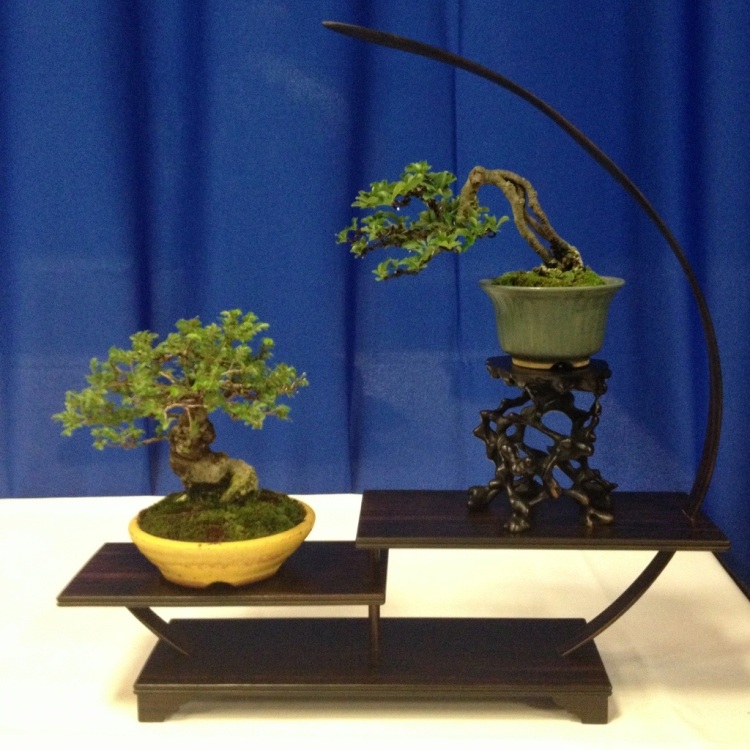 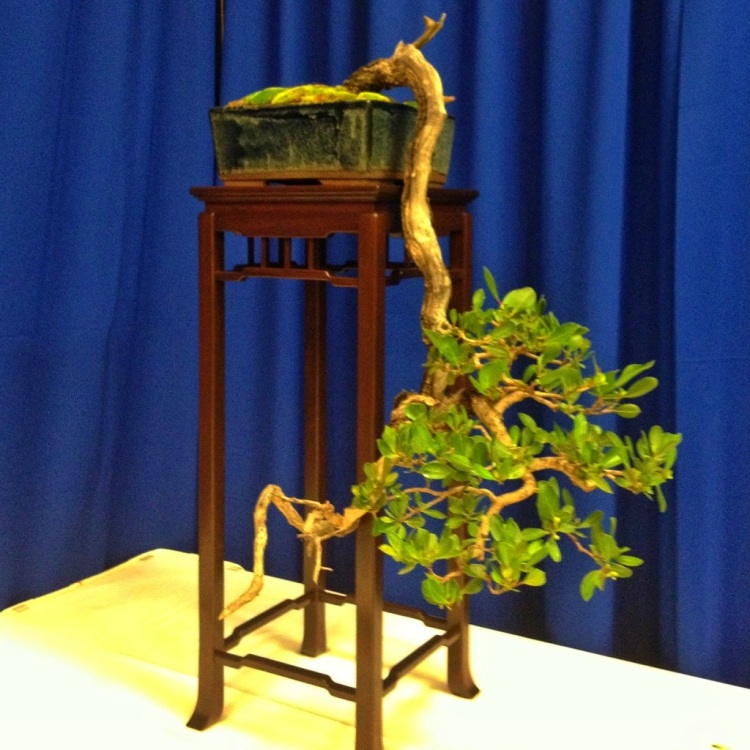 And something different, a real baobab tree 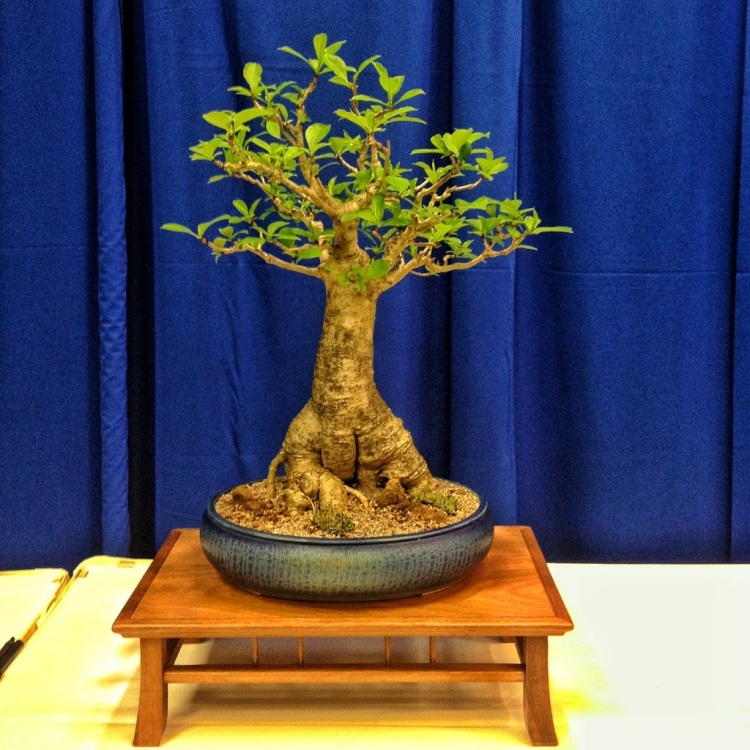 My dwarf jade again, they turned the stand around though

There were many more beautiful trees (for a full gallery by Paul Pikel click on the BSF website here. Paul is a vastly better photographer than I)
One of the major events of the convention was the stepping down of the old BSF board and the installation of the new board. I must disclose that I am the new 2nd VP.
I would like to thank, sincerely, everyone on the old board. Each one of you had an important role to play for the many years you all served and we, as the newbies, have some shoes to fill.
We have your contact info. Don’t leave the country.
These next few paragraphs are for the Florida readers.
This convention I did what I do best: I watched and listened. I tried not to subjective in these observations.
I tried to be Leonard Nimoy and act Spock-like.
There are serious divisions within BSF.
One thing we (as a board) are adamant about is the reunification of the clubs throughout the state.
I am not blaming anyone here. Please note this. There were mistakes, miscommunications and feelings hurt on all sides and from all corners of the state that has led to this situation.
I spoke with many members and asked questions and allowed them to speak. I was pulled aside by many members and officers and I allowed them to speak. I listened.
We, as a board, are asking for your help in making the organization better.
Please, I know that this is a blatantly political act but we cannot do it without you.
Thank you.

It wasn’t serious all the time though.
There were many beverages of spiritual nature imbibed. Good food, crappy food and too much chocolate (thanks Rob) eaten.

Here is Charles playing a ukulele 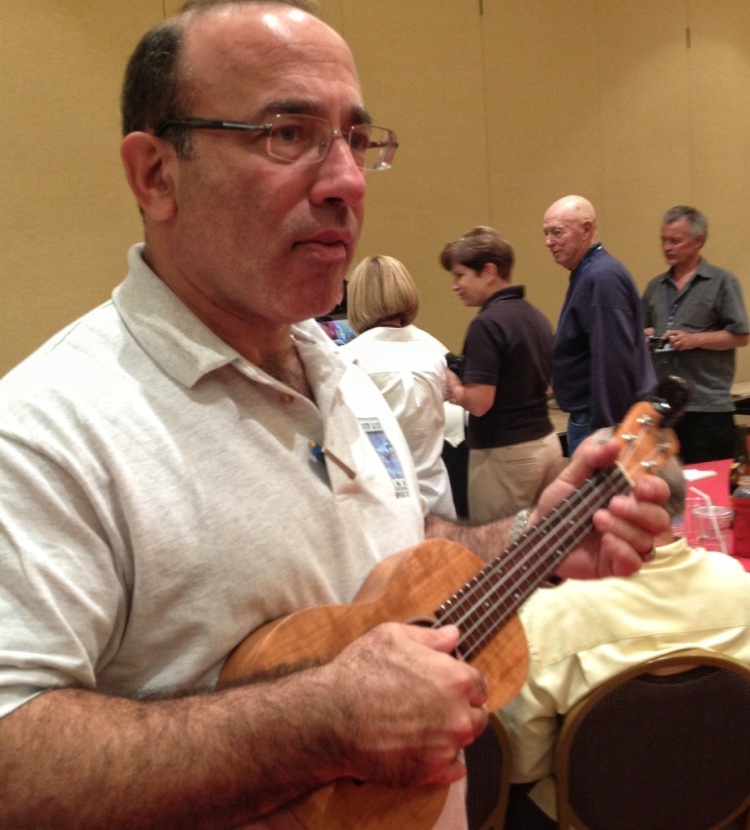 I, of course, had my guitar and we had a half rousing sing along of “Blister in the sun” by the Violent Femmes.
In my spare time I styled and worked on a few trees.
I promise they will be upcoming blog posts.
This crepe myrtle was one

And this hackberry (an update from this post) as well 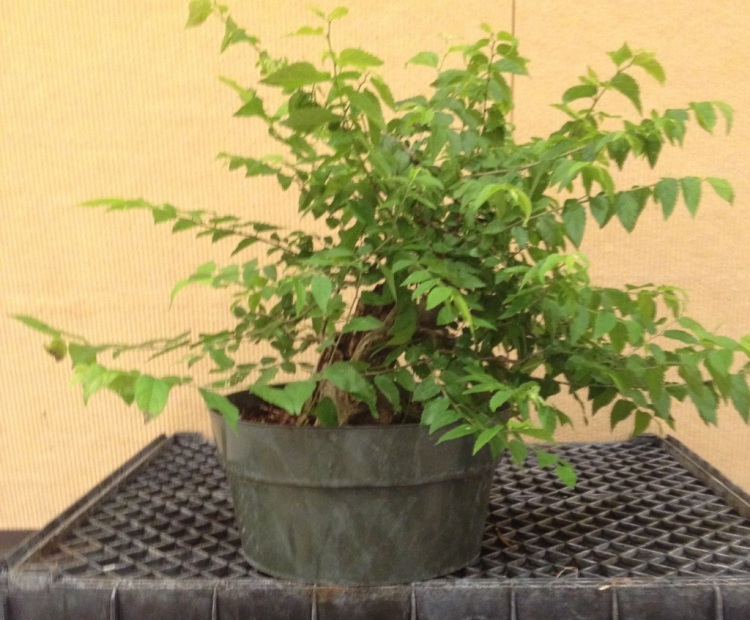 The best news; my local club took home the trophy for the Club Night competition with a three tree bucida spinosa planting

It was stiff competition but Betsy, Don, Walter and Juan beat them all.
I am proud of you. Good job!
And now, because I can’t conclude this post without it, these are the things I got.
A beautiful pot from Taiko Earth 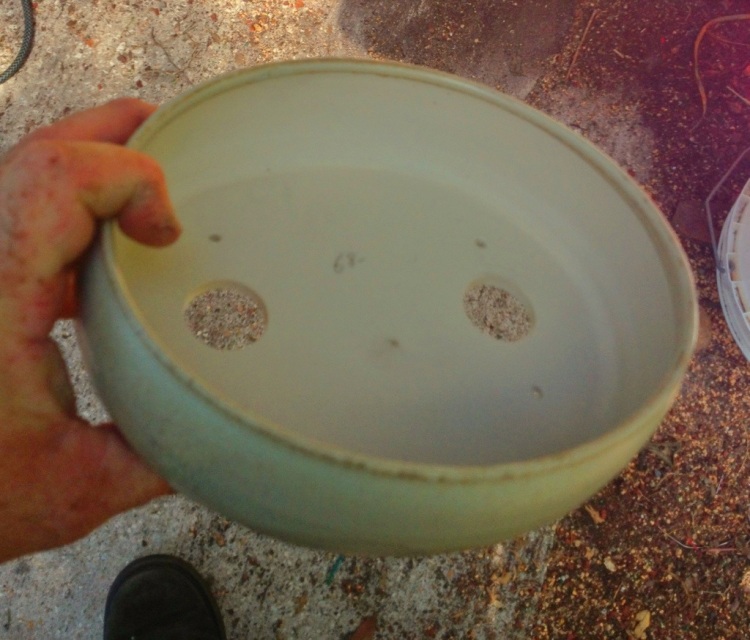 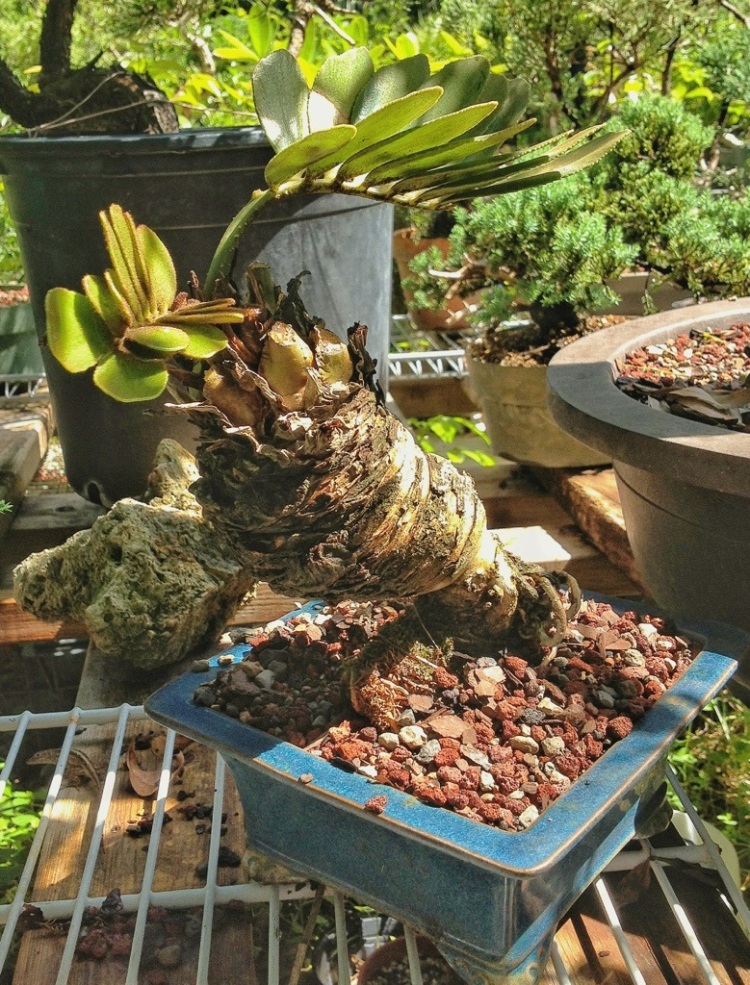 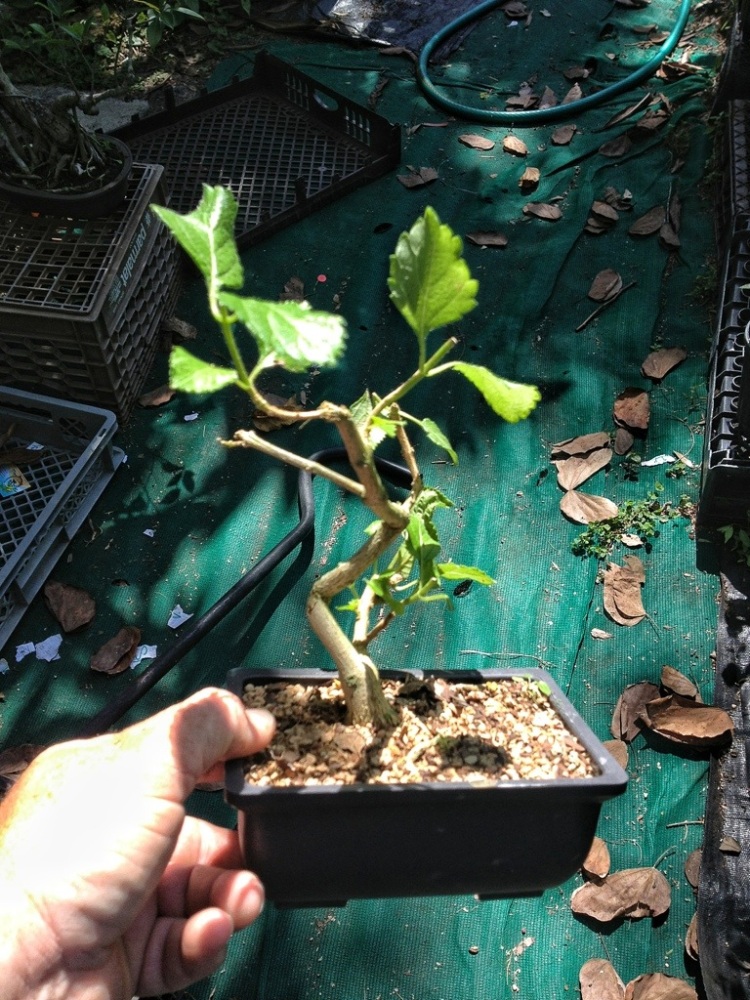 A nice project ficus from my buddy Ronn 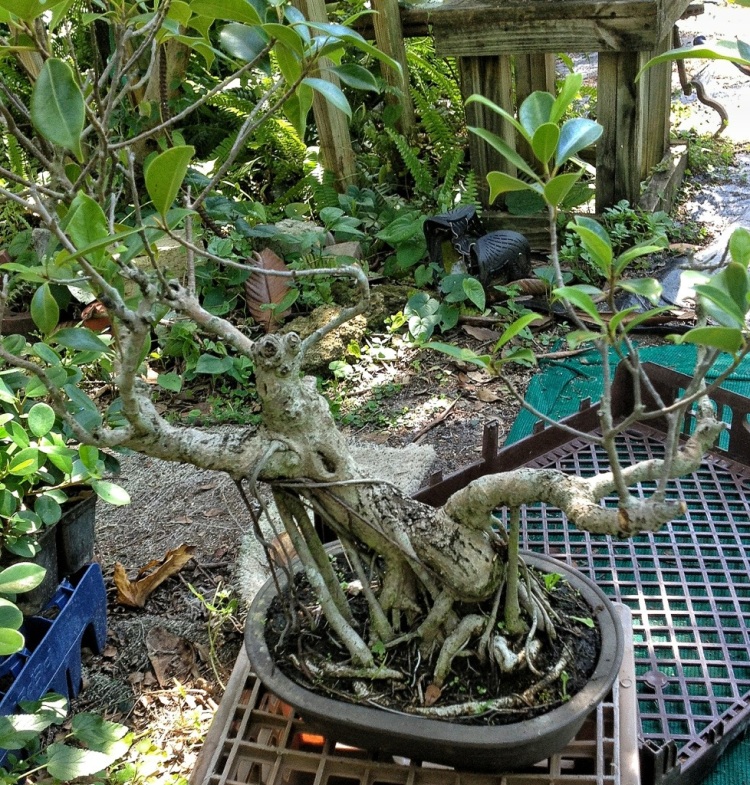 And this cool hornbeam from Mike Rogers. I may or may not blog about it. What do you think? 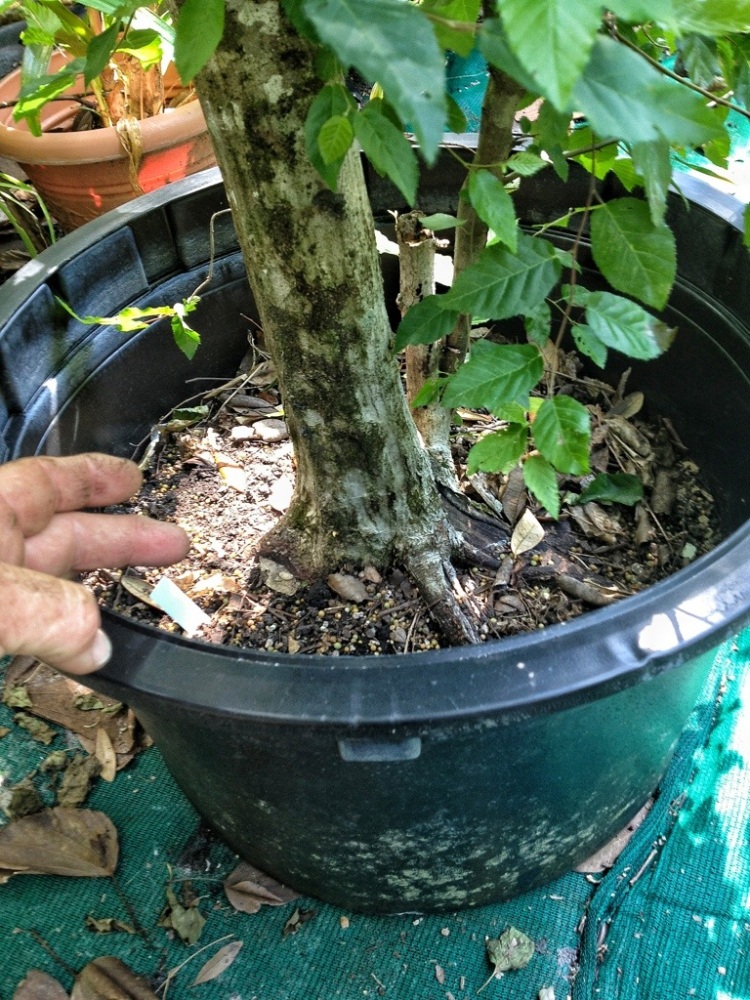 When I was cleaning up the rooms at the end I found a small carved figurine and a tokanoma pot that I knew belonged to Sean Smith. He was already packed and waiting on the shuttle when I showed them to him. He was so grateful that he gave me the pot. 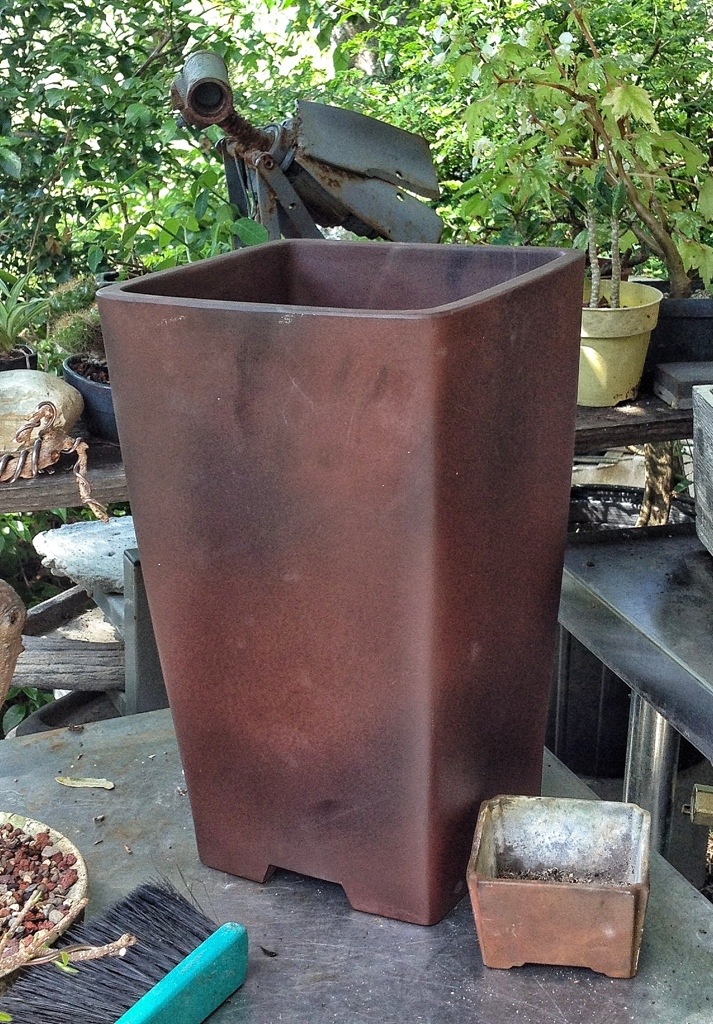 Thank you so much sir! You are a gentleman.
Overall, it was a good convention. I made some good connections (which is exciting) met new friends, and got ignored by old ones ( C’est la vie! I am a blue meanie I guess)
I also had a good talk with a lost friend and apologized for myself. And we agreed to wipe the slate clean and start over. I will try my best to make sure that happens.
And to conclude, I won an award

How’s that? Not too shabby, eh?