I get an email from a loyal reader, Matthew

I picked up a ficus nerifolia….. I thought the tree had potential when I first purchased it but now after staring at it for a while I’m pretty stumped. If I sent you a picture of it could you give me some guidance?

I said sure, I’m always up for a challenge.
He sends four pics (all the pictures are his except for the drawings)

Judging by the background I would say that the tree is in a eight or ten inch pot and that would make the base 3-4 inches wide.
It’s a good size willow leaf ficus ( I’ve been doing some research into the Latin name for this tree. It began as f. nerifolia; which was supposed to mean narrow leaf. But Latin for narrow is “angust”. Which should make this f. angustifolia. But there already is one of those. So the next name people came up with was f. salicifolia. Which means “willow leaf” and that is clearly correct Latin : salix=willow and folium=leaf. Then someone comes along and changes it to f. salicaria. The first part is “willow” but the last part is……cary? If we look up “caria” or “carium” in Latin we get “cary” which is a name. Like Cary Grant or Cary Ewles. The point of all this is; did the botanist who “discovered” the willow leaf ficus, even though we’d been using it for 40 years before he came around, name it after himself? Probably. I think we should go back to calling it f. salicifolia. That is correct Latin. ‘Nuff said.)
I got to looking at it.
At first glance you see the thick base and think “not bad”.
Then, looking closely you see how tough a tree it is to style. You have three trunks about the same thickness all in the same plane.
It’s like me asking you “what’s 1+2?” and you hold up three fingers.

It makes for a flat tree.
Let’s talk about the artistic/sculptural concept of planes.
Say we have a cube

We see one side or one plane.
If we look at it at an angle like the first pic

We have three planes.
A three dimensional object has many planes but some are so subtle it’s hard to discern them. Those are usually called curves.
A tree should present three or four planes for good depth

These planes should also taper as you get to the top.
This poor tree has (basically) one plane

How do you fix it?
One way is to turn the tree slightly so that you can see the corner (like with the cube) and then prune the branches so that you create a third plane.
I have two solutions, in virtual, for Matthew, hopefully he likes them.
I had him send some more pics, this time naked ones……sorry, defoliated ones.

These pics make it easier to see what I meant about planes.
The first thing in choosing a front is to find the widest view at the base.
With this tree it’s easy:
This side 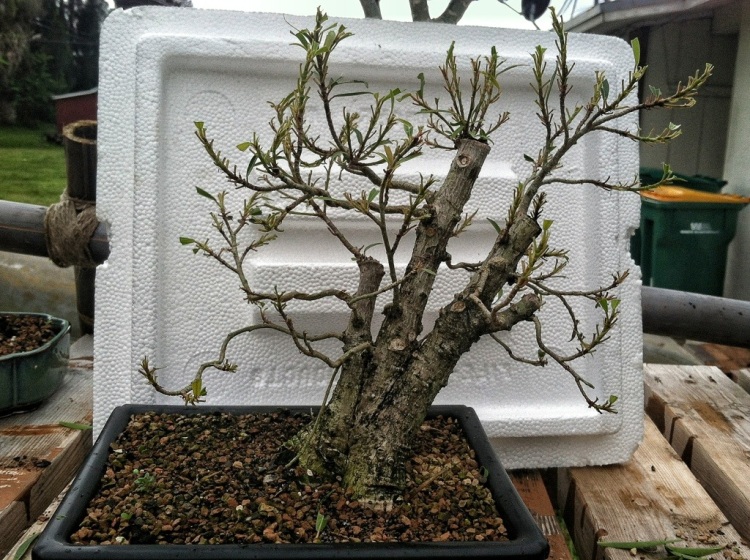 Since both sides are equally flat I came up with two (or three) solutions.
Using this as the front

The first step is to chop it back.
The plan here is to make the three trunks different heights.

The main trunk will be the right hand one. Readjust the angle more upright

And that’s a really terrible virtual.
It’s tough trying to draw with your finger on an iPhone screen.
How is this? 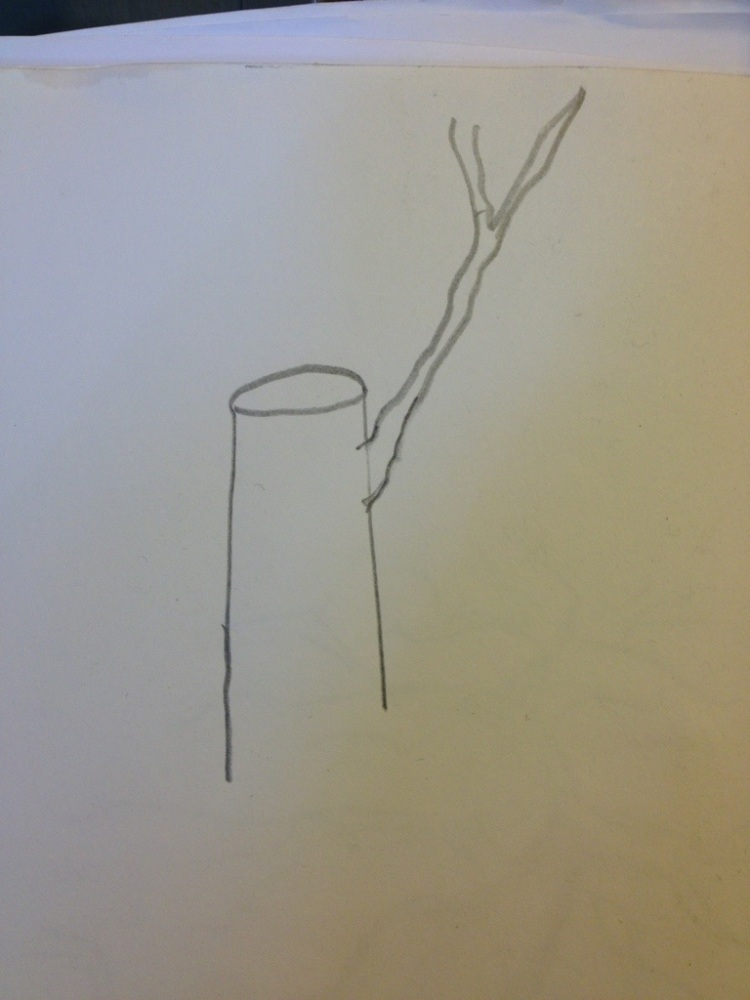 This being a willow leaf ficus it won’t hurt the tree doing this.
Contrary to popular belief though, it won’t heal quickly. It will close slowly from the inside out.
The next option is to use this side

And use the middle trunk as the leader

Remove the left one entirely (this was the leader in the first styling)
And use the first branch on the right trunk as the, uh, first branch.
Chop the middle at the red line and regrow.

I prefer this solution to the first one.
A third solution would be to just cut each trunk at a different level

Which is not bad but it will always look like a compromise.
Now, the faint of heart will be timid chopping tree this back. I assure you, wherever you cut

Will put out so many buds

You won’t have any idea what to do with them.
And not just on the cut end, all up and down the trunk as well.
When its time to repot, put the tree at such an angle that you see (just so slightly) one corner of the tree.

Well Matthew, I hope this post helps.
I feel like I’ve left so much out. It is always better to teach and learn one on one. Maybe one day we can get together for a class.
Keep this in mind, most people find that the initial cut is the hardest, but the next steps are actually harder; choosing what needs to stay or go from the hundreds of buds you have to choose from.
Good luck!