This batch of trees is still surprising me 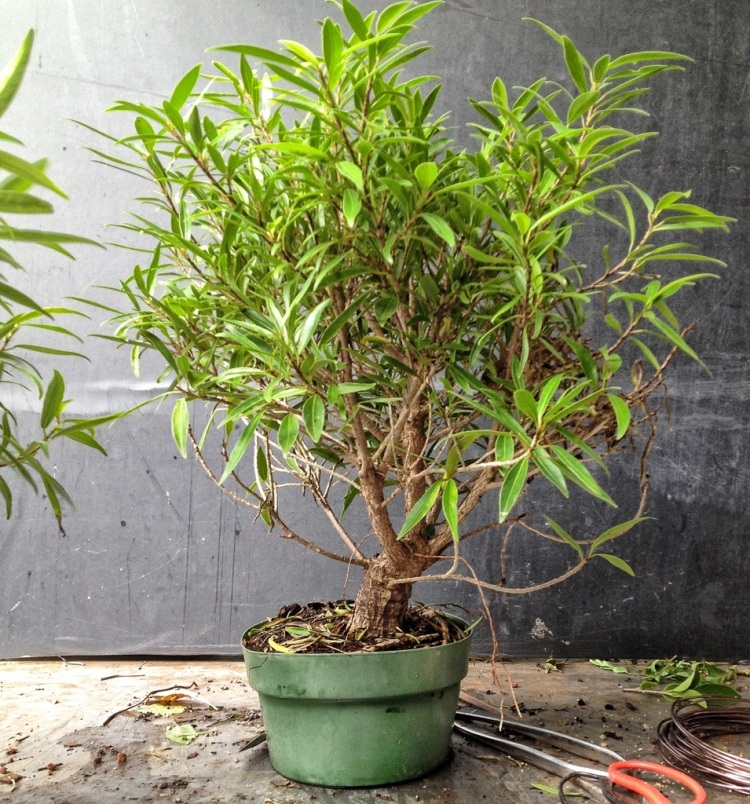 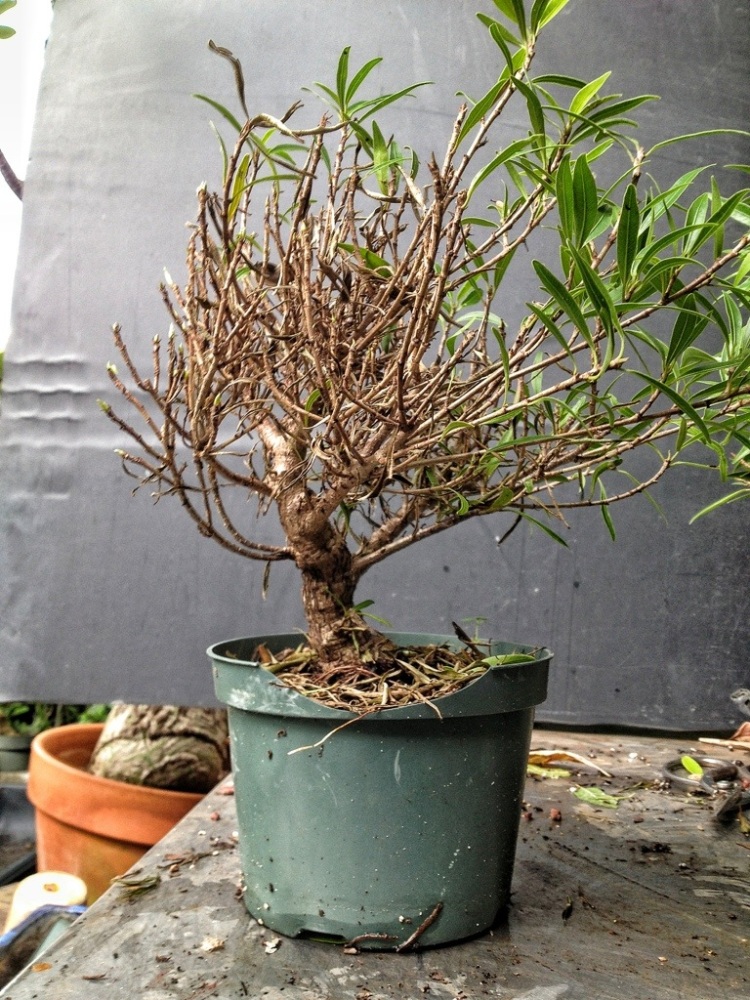 Watch and be amazed.
We have three ficus salicaria in 6 inch pots.
This is the lesson: Before you start working on your tree, you have to learn it’s true roots. You gotta dig down man!
Where does the story begin?
First willow leaf ficus:

These are modest trees, if you bought them at most nurseries here in Florida the price would be around $25.

These trees have been in these pots for a few years and are a bit rootbound. Don’t be put off with that on a ficus. What I am doing to these is standard procedure when initially potting and styling ficus. As long as your nighttime temps are 60 Fahrenheit (15 Celsius) and won’t drop below that for a month you are perfectly fine with the insanity you will see next.
A little digging,

and you see that my thumb is at the true base of the tree and my index finger is at the original soil level.
Pretty deeply buried I would say.
A little root pruning: 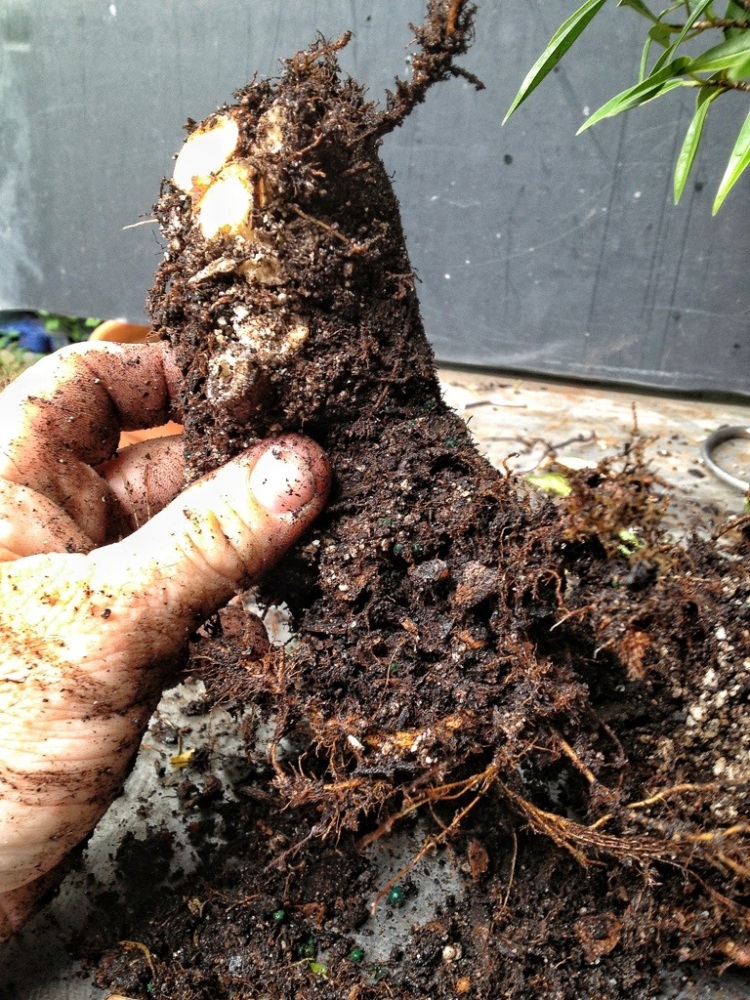 (yes, that’s a root) and that modest tree now has a pretty significant trunk and base. 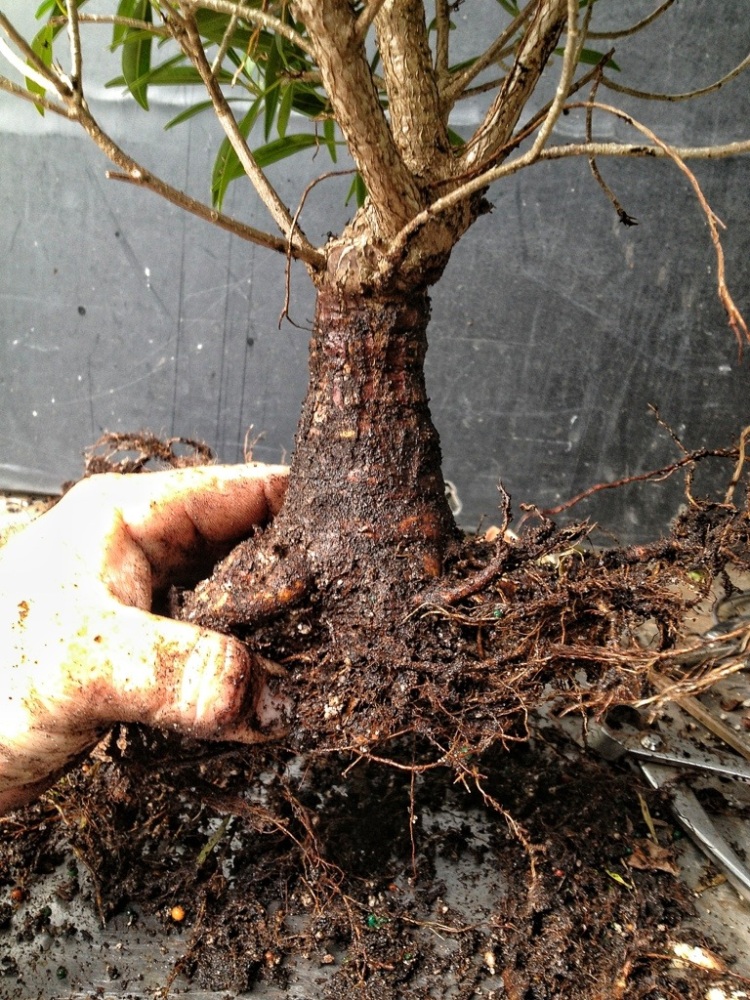 Hold on, let me wash up a bit

It is exceedingly difficult to use my iPhone with my fingers covered in mud.

That’s better.
With all the dirt washed off you can see that, even though I cut off that huge root, I still have a goodly amount of rootage around the base.
Now, a light trim

I do tend to pot a tree low on its first go around, especially if I’ve butchered the roots.

Which is why I’ve hidden those beautiful surface roots.
Now for some wire-

Realize that the wire on this tree now is just a rudimentary job and will be minimally effective on the smaller branches. I really only wire them now to give the tree a shape.
I’ve had a question on a forum about the apex branches on my trees being longer than it should. Let me expound… 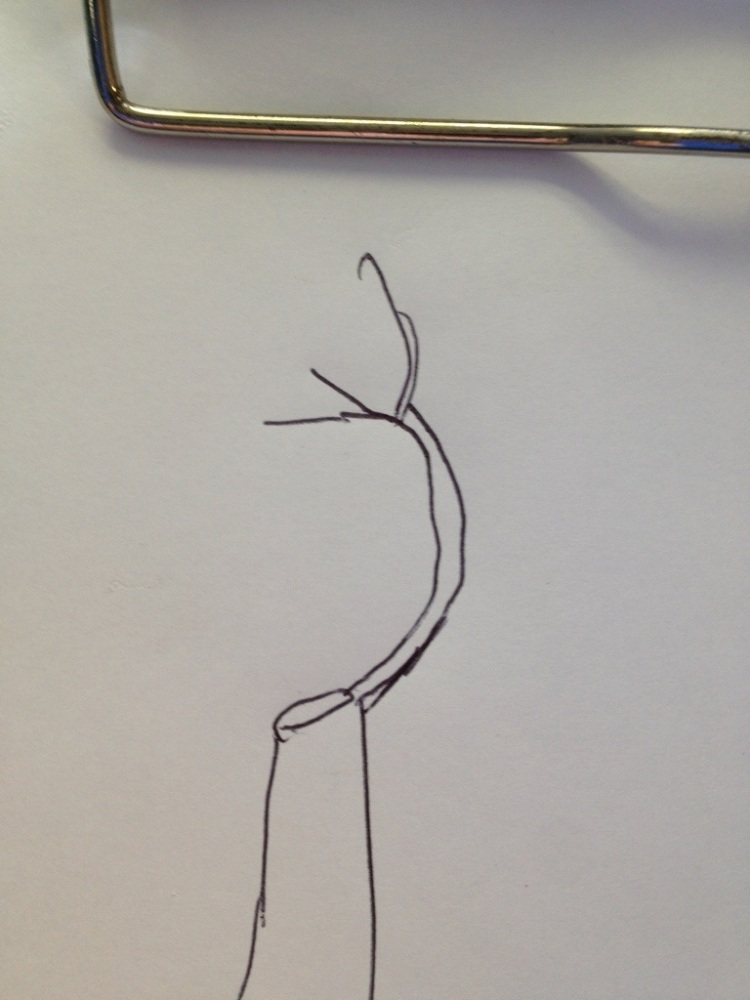 I could cut it here 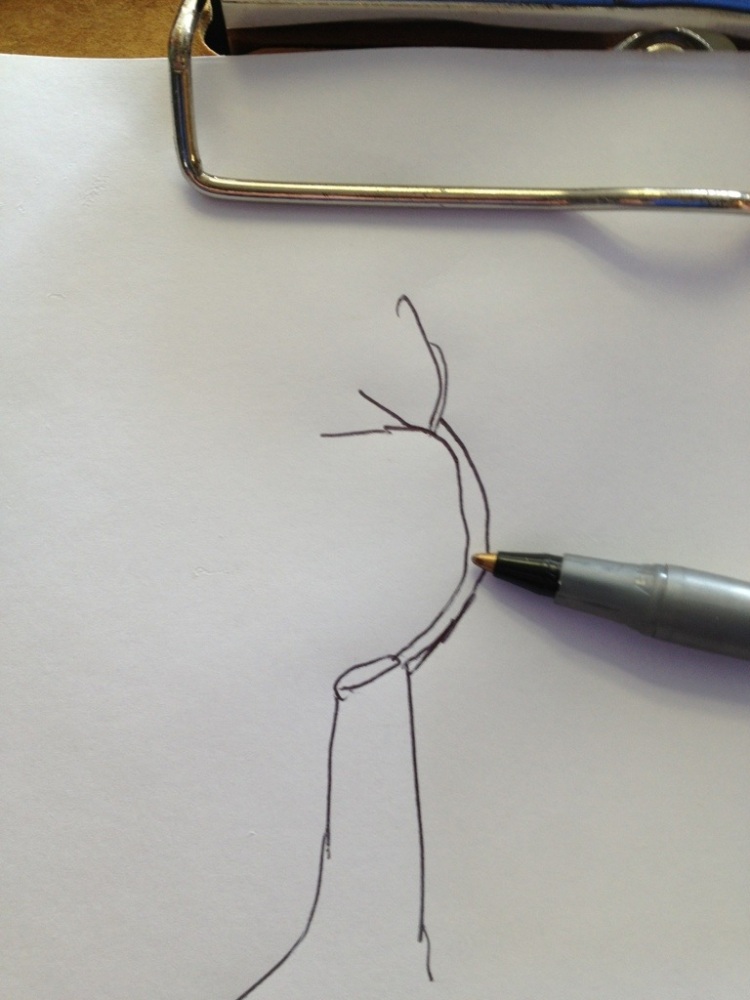 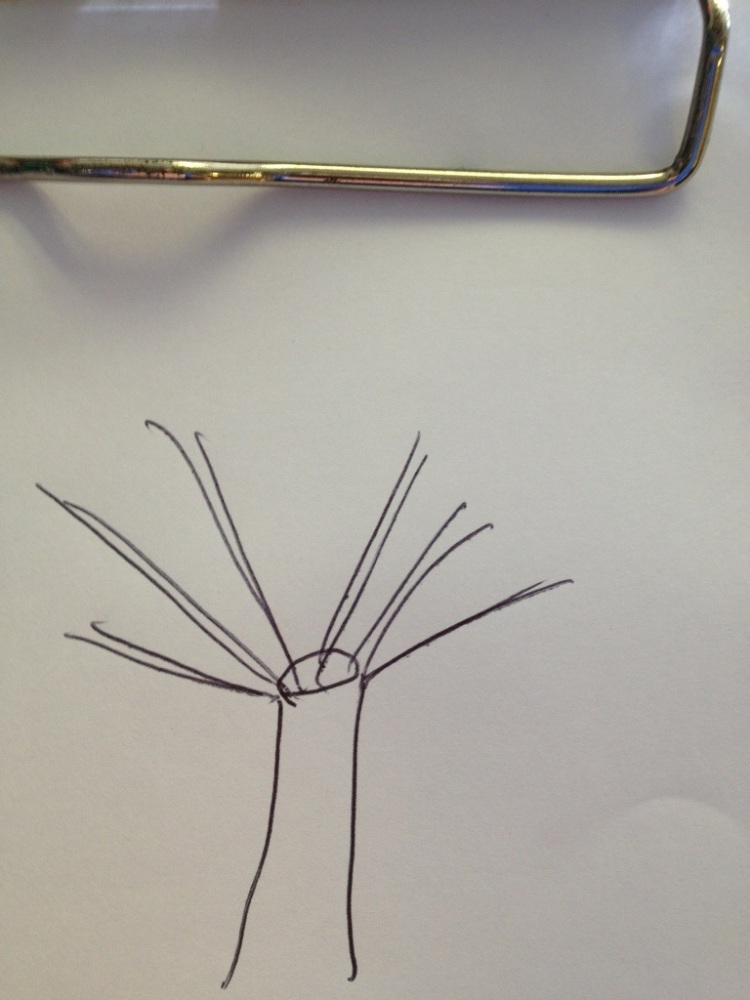 Which is how a lot of people build canopies on broadleaf trees.
They just keep cutting the top like so

I prefer to build my canopies one branch at a time.
I’ll let this branch thicken

And push out new growth

Then I’ll choose a new leader from that and reduce the height by wiring and so on and so forth and eventually the top will have both ramification and taper. Not just a stub with 20 shoots emerging from it in a bush-like canopy.

The next tree took a left turn (or right, depending on your point of view) 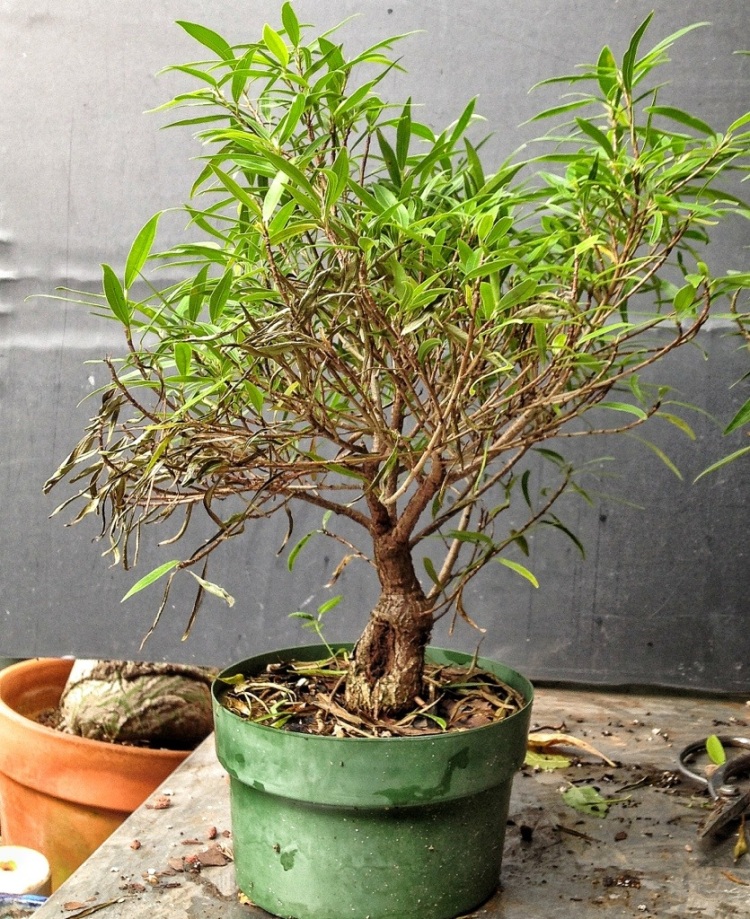 With a little digging I discover…..

I did not see this coming at all. It’s like that neea buxifolia I wrote about last month.
The ficus was planted like this

If I took this cutting I would want to have seen the bend so that I could take extra care of it at least. It’s significant since those natural bends don’t happen often.

The grower might have done it for the same reason I’m using my scissors as a crutch; it just wouldn’t stay in the pot.
Good thing I have wire to tie it in, right? 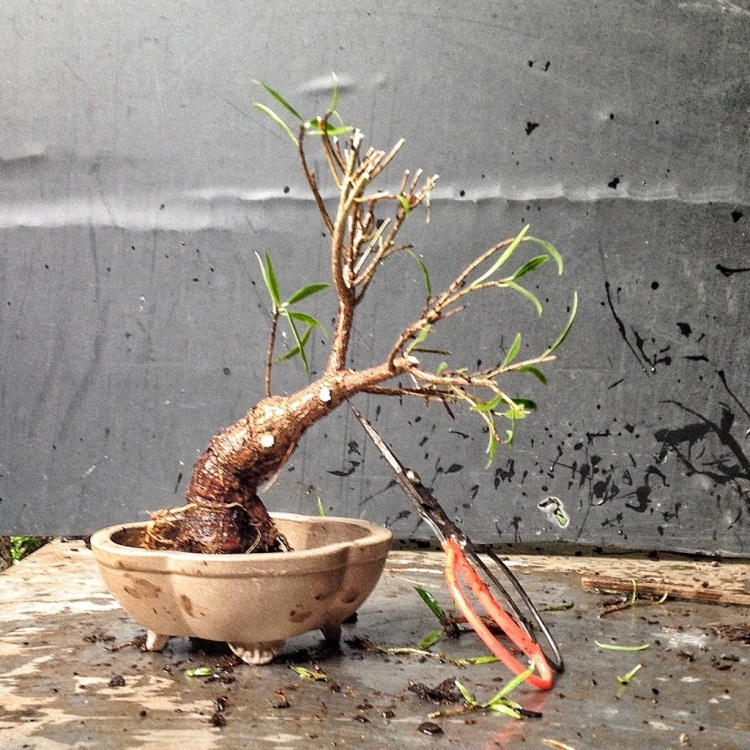 I could leave it like that, let the scissor grow into the tree- it would be very avant garde to show a tree in a show like that; I could title it:
“A post modern critique of the lingnan clip and grow technique and it’s effects on the affectation of bonsai culture in consumerist, bourgeois markets and aesthetic paradigms.”

Soil and one wire 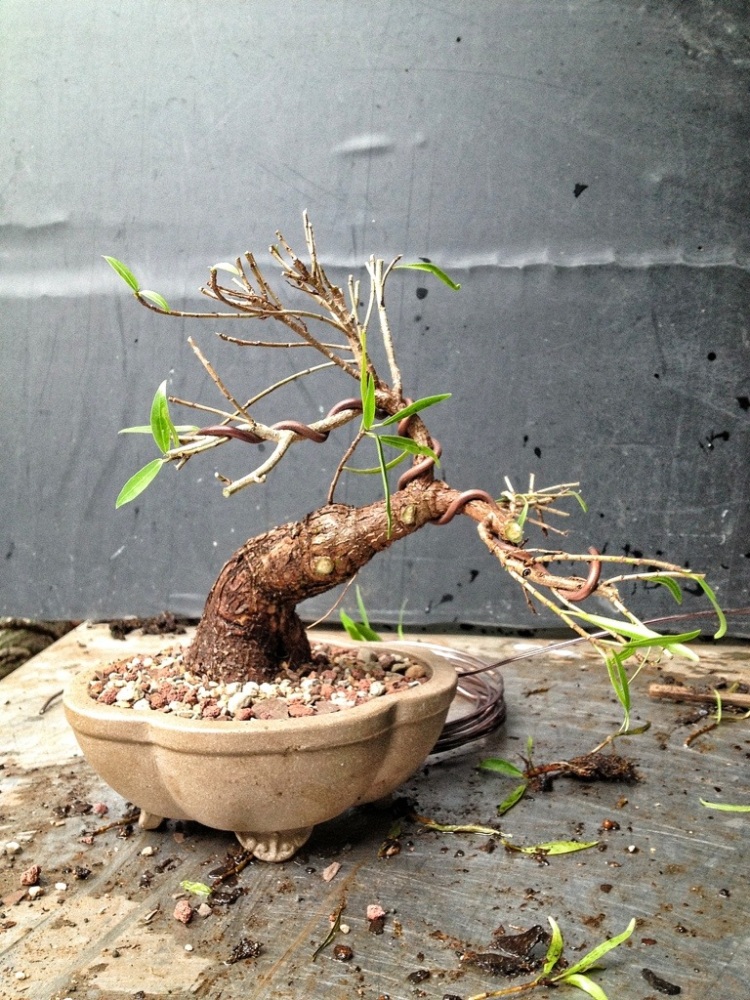 A little pruning and a few more bits of wire. 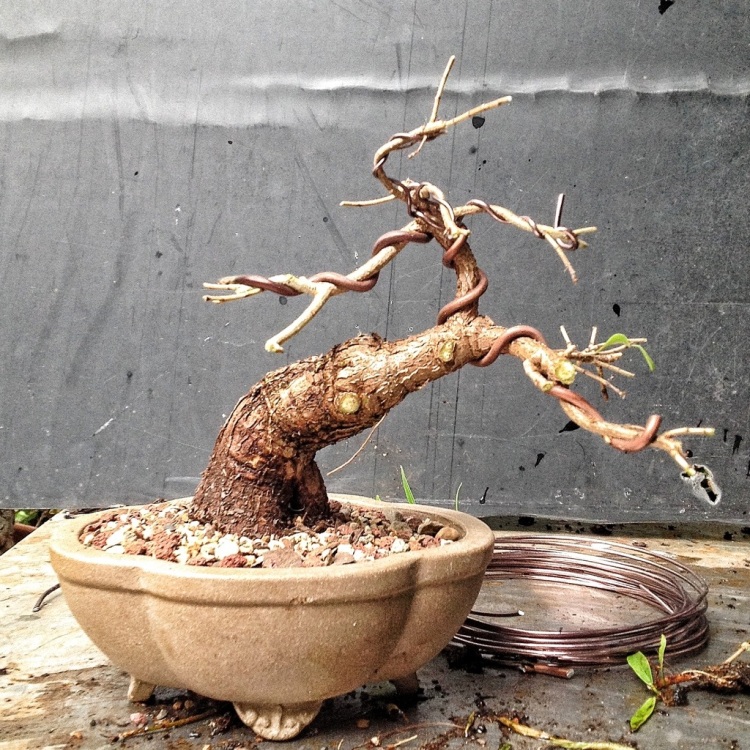 And I think this is going to be awesome tree.
Next!

You’ll notice that this tree is mostly defoliated. 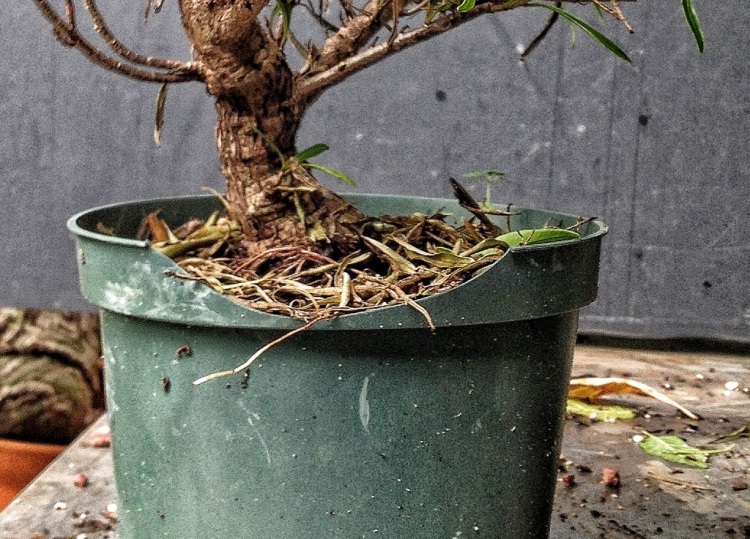 It wasn’t me this time.
In late summer, ficus salicaria are prone to a fungus-like event where suddenly all the leaves will fall off in swaths of vegetable demise. (That’s a good band name Vegetable Demise. The first album could be called “Salad Daze”)
This is not to be confused with the springtime leaf drop when the tree begins to grow again.
Usually this summer blight occurs on trees that are crowded and overwatered and are planted in regular potting soil or a too organic mix.
My guess as to why this happens is the leaves stay too wet and transpiration can’t occur so the tree aborts the leaf and grows new ones. It might be an adaption to an environmental condition where the leaf gets coated with something (dust, mud, etc) and in order for the tree to live it drops its leaves.
But no one knows the origin of this species as of yet so we just don’t know.
What I do know is that if I hold back water a bit, water only the soil when I do water, space out the trees so they get better airflow and remove the dead leaves the tree will pop out with new leaves fast.
That’s what makes me think it’s not a fungus because the tree will get better without chemical treatment.
I asked both Erik Wigert and Jason Schley what they do about this phenomenon and they do exactly the same thing.
Here’s a cautionary story about this weird event:
There once was a man who bought a large ficus salicaria for close to $2000 and took it up north. The tree dropped it’s leaves in this manner in the early fall and it didn’t push new growth so the man, thinking it was dead, threw it onto the dead tree pile. In the spring, to his surprise, it came back to life and he still has that tree now; he has continued his hobby now with a little more knowledge and a tad more patience.
Anyway, you can see that my tree has new growth.

I’m not too worried about the health of it.
Let’s examine the roots. 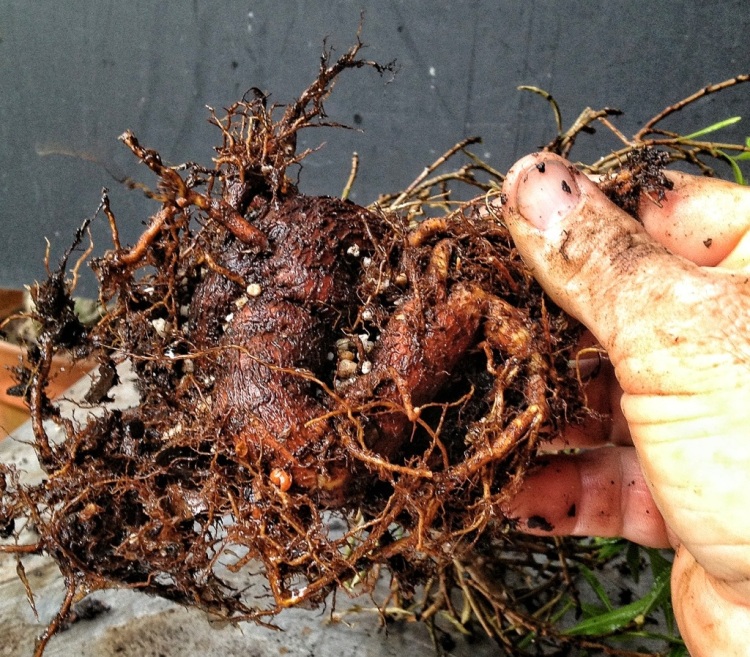 What am I seeing?
It’s kinda like a seahorse or a slug.

There’s one big root that wraps under and then squiggles about.
Very odd to say the least.
What do I do about it?
With this tree being a ficus salicaria I can just saw it off.

If you have to do something like this, make sure you do it in high summer or you can give this tree bottom heat to stimulate root growth.
It’s even late in the season for me to be doing this; I wouldn’t recommend a chopping like this at this time.
But I’m a rebel…an iconoclast, as they called me in school…..I am the Lizard King, I can do anything (sorry, obscure reference there).
I’ll let you know in a month or so what has happened.
In the mean time, tell me that this isn’t a lonely picture:

Let me play with it a bit more…. 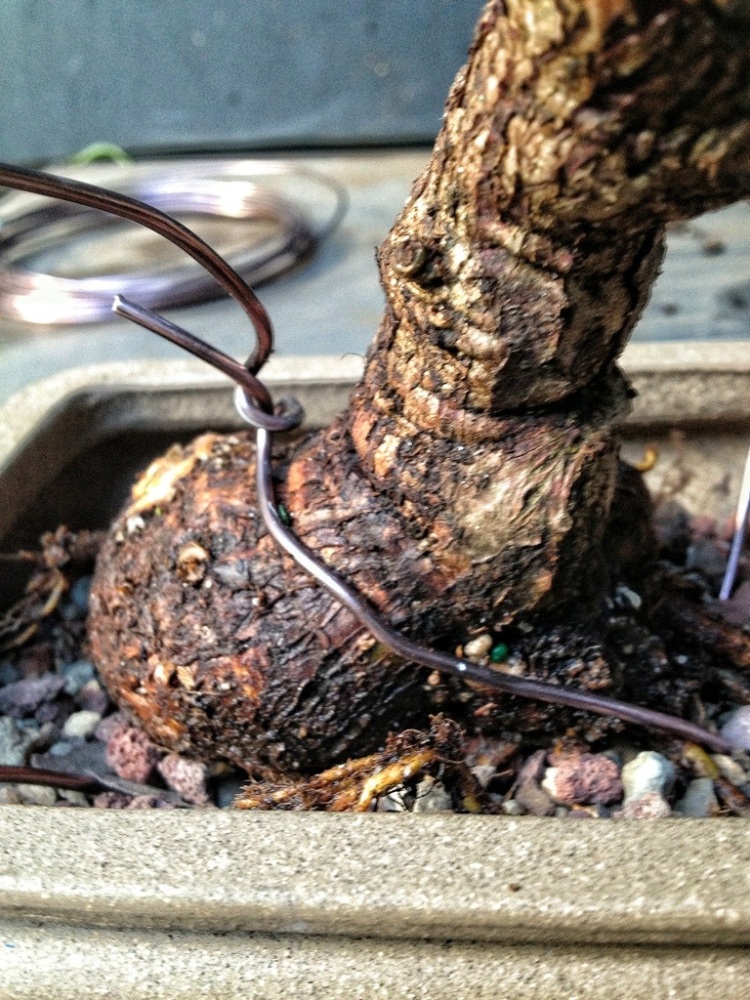 Some soil and a trim-

I did fertilize heavily, I want as much growth as I can until cooler weather sets in.
There are three more trees I worked on but it’s more of the same thing; second verse, same as the first!
I won’t bore you with them here. (Although I think I’ll post the picture progressions on my Facebook, Google+ and Tumblr accounts.)
What’s next?
I have no idea!