This tree is left over from my early days of bonsai, when I bought anything “bonsai-ish” and thought you could make a tree out of it.
But, I’m hearing someone say, you can make a bonsai out of anything.

Can that last statement be true?
Well, it’s a loaded question; anything can make a bonsai-
given time.
But we probably won’t live long enough for most plants though.
This is a fundamental truth that most people do not understand about bonsai: even though bonsai grow, we don’t grow bonsai.
To paraphrase Kurt Cobain: “..we… build a tree…”
How?
We take a grown tree and turn it into a bonsai.
The growth a bonsai does experience under our care is mostly limited to the branches. the trunk girth, except for some ficus, will not increase unless you take the tree out of “bonsai mode” and into growing mode.
You put it into a big pot or in the ground and let it grow. You don’t practice any bonsai techniques (or hardly any) and you’re basically just waiting for the tree to get big.
How does all this soapboxing apply to this tree? 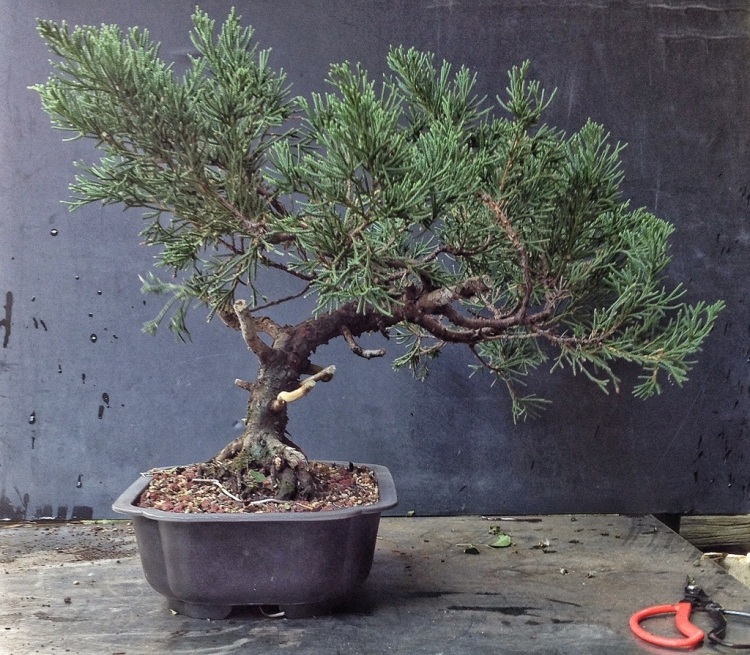 I got this tree in a landscape nursery (it is a juniperus chinensis “parsonii” or parsons juniper)
It was in a 3 gallon nursery pot and I bought it for some reason.
I never worked it, it worked itself.
What I mean by that is: a beginner plant person (or even an experienced one) will have a hard time keeping a plant healthy in a container for a long time.
(Which is the another reason most bonsai artists don’t grow trees. It’s a wee bit difficult)
So this tree suffered the inequities and iniquities of a too busy, part time bonsai enthusiast.
Poor tree.
It’s growing well now.
I repotted it from that 3 gallon nursery can into the training pot with my regular bonsai mix in January of this (2013) year. It’s now November. 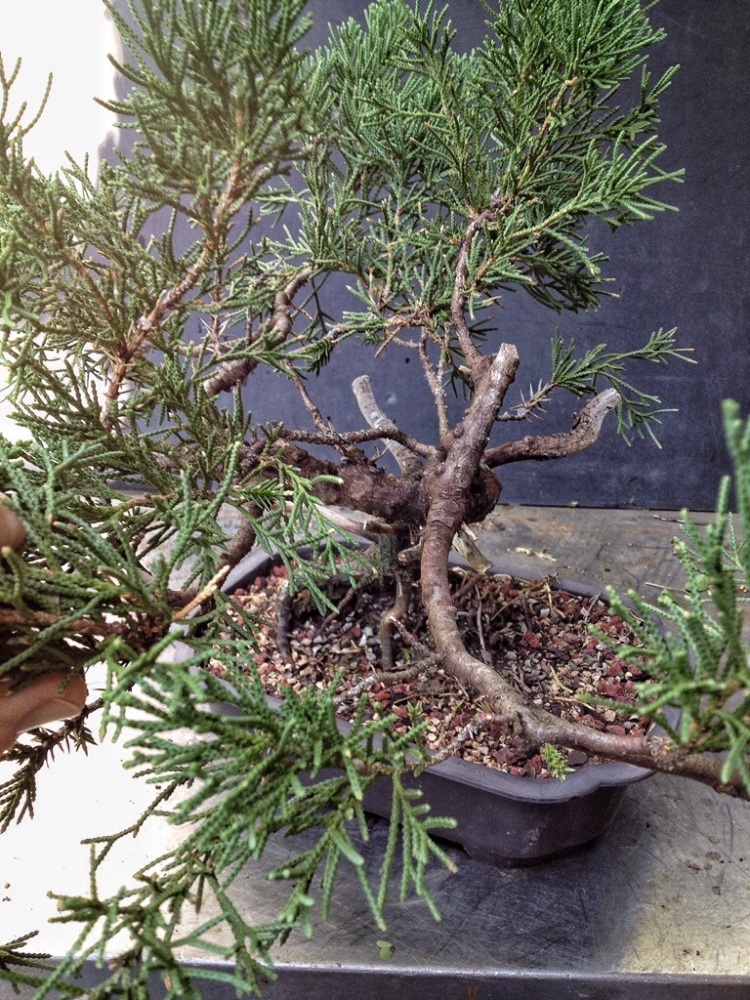 It has a not-too-bad trunk with some deadwood (again, it was unintentional on my part. The tree sat for years until I decided to work it in January). 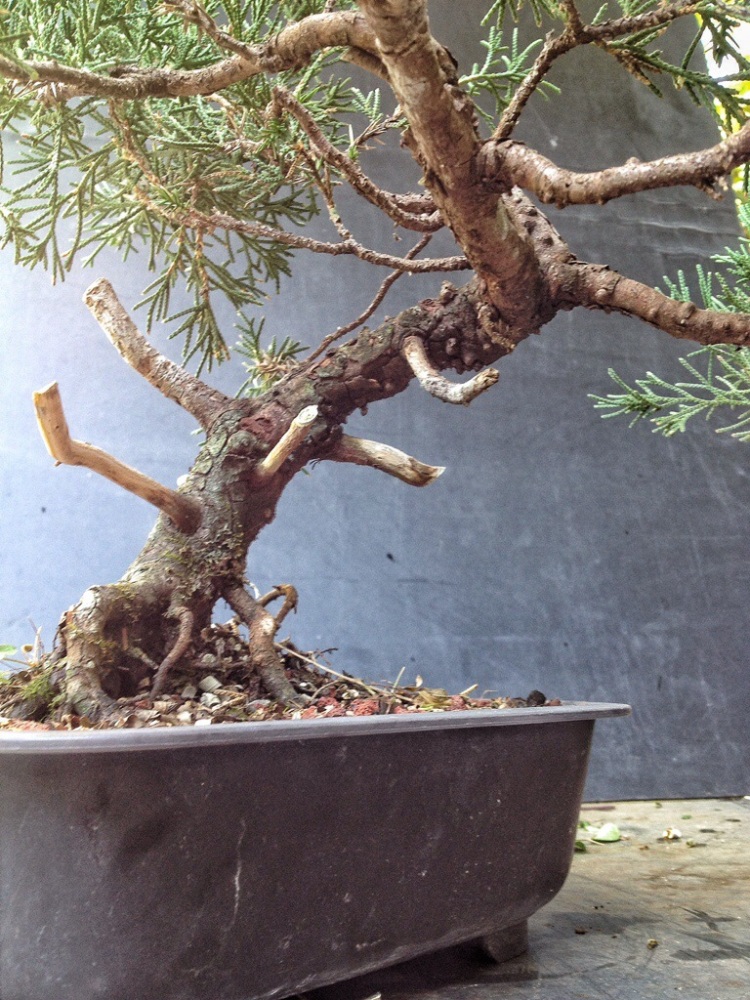 And it actually has a nebari (root spread) which is unusual for a juniper.
The difficulty (and why everyone who picks it up puts it right down again) is the awkward branching it has.

There’s a lot of oddly placed branching and straight, un bendable bits that I’ll deal with in a second, but my first bit of styling is jinning the top branch.

It needs to be reduced in thickness and length but that can wait. I’ll just be wiring this session.
Which will require some of this- 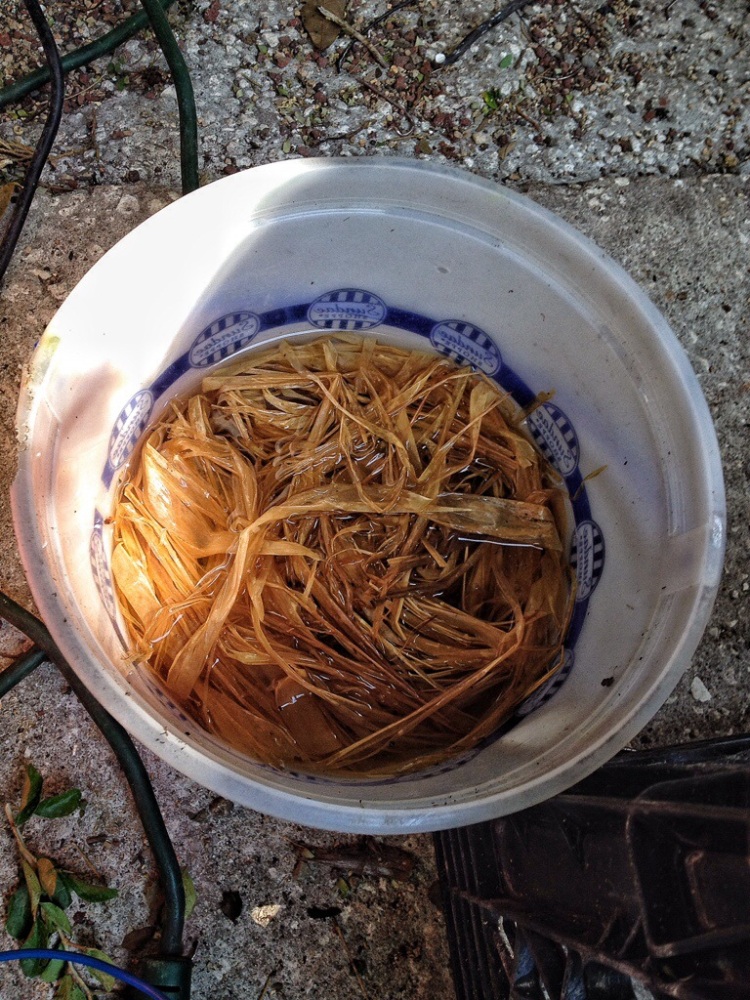 Raffia!
Basically, I’ll wet this stuff (available at most craft stores) and wrap it tightly around the recalcitrant branches that need some help in bending.
This protects the outside bark from cracking (there is an engineering principle at work here, when you bend a tube, which is basically what a tree branch is, the outside of the bend is breaking whereas the inside is compressing. So if you add another layer over the bark, the bark won’t split, it’s now being compressed.)
Anyway, wrap it tightly around the branch in question- 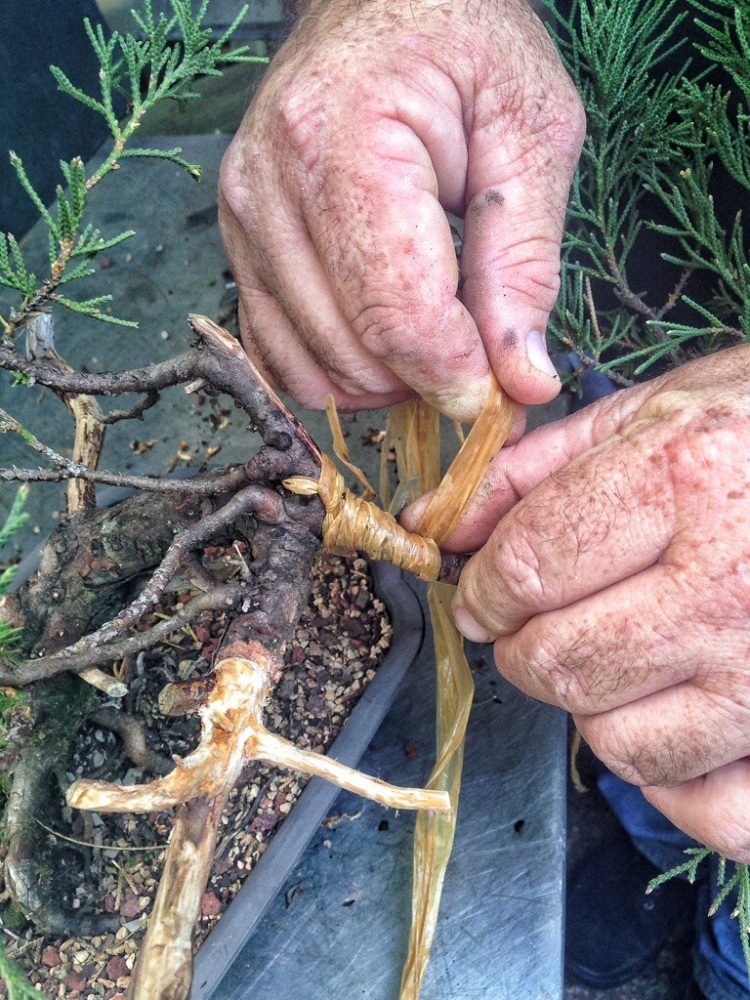 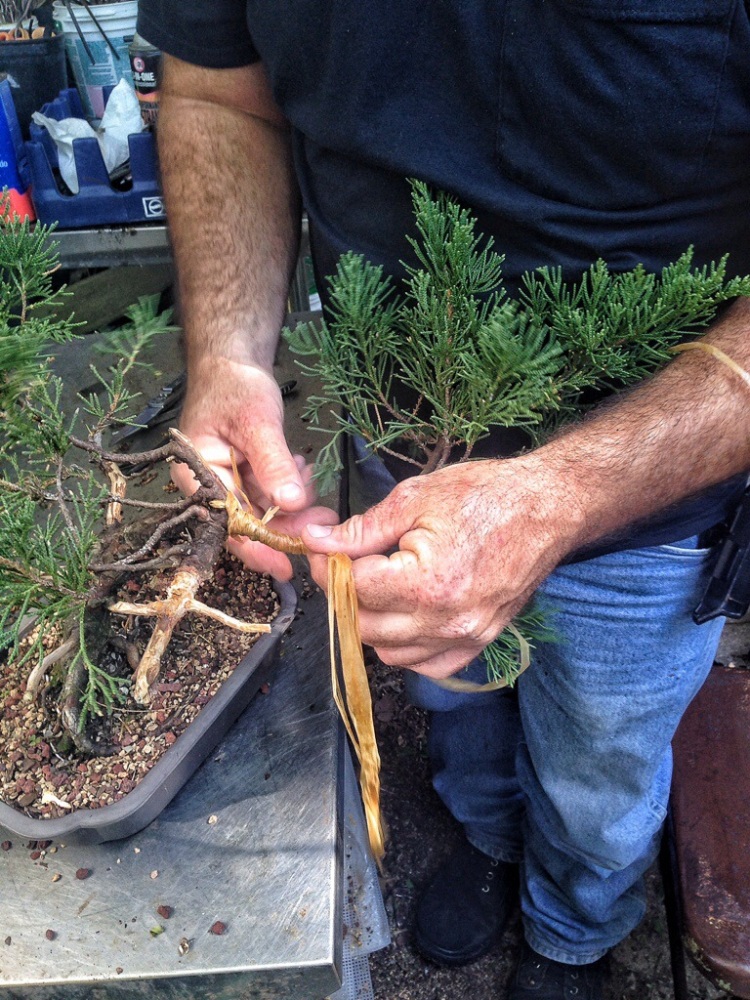 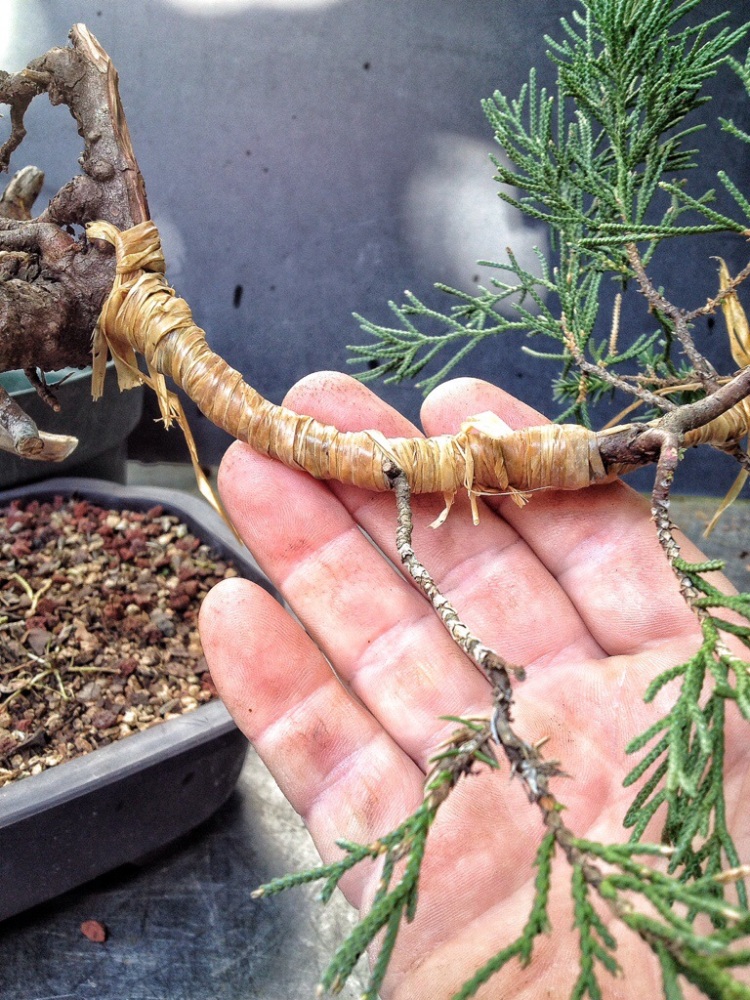 Doesn’t that just look so cool?
And now some wire.
One- 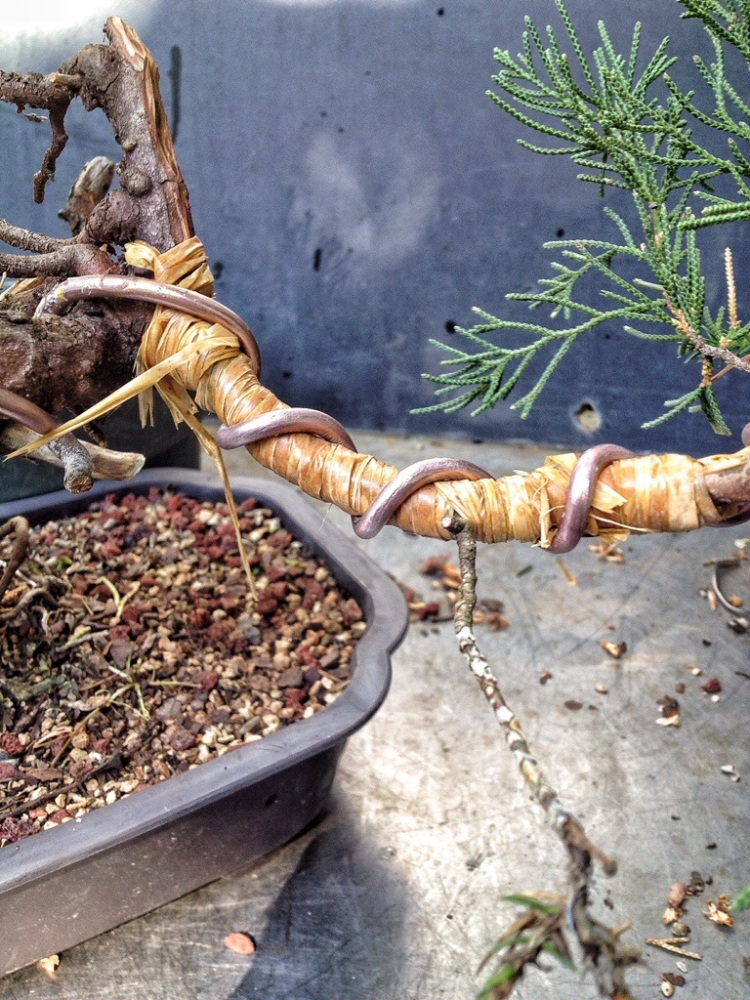 Now for some bending. 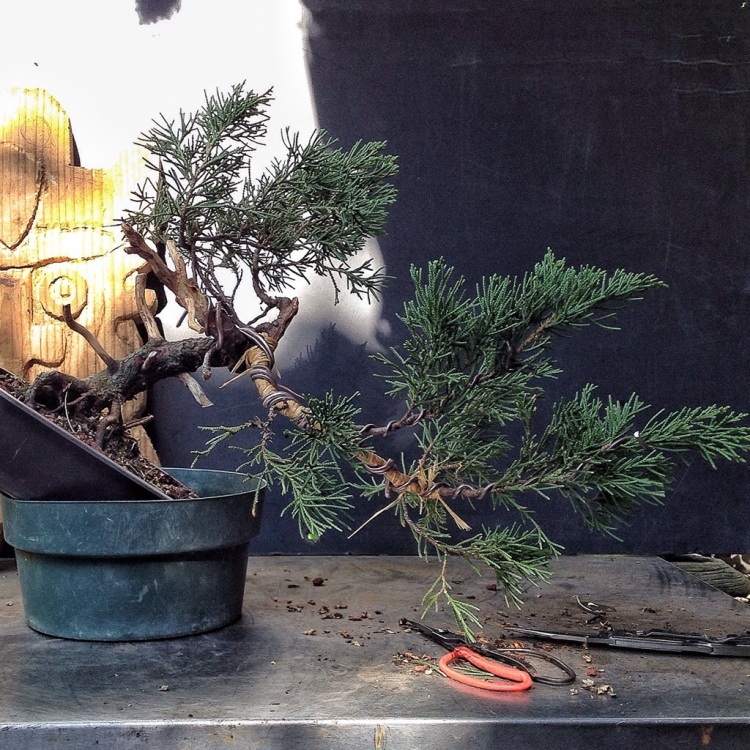 And the style begins to show itself. A cascade or semi cascade.
I’ll repot it again in January next year but for now it’ll sit in a bigger pot at the desired angle.
Next, the secondary and tertiary branches.
Before placement

Moving along quickly now-
All the weird branches on top? 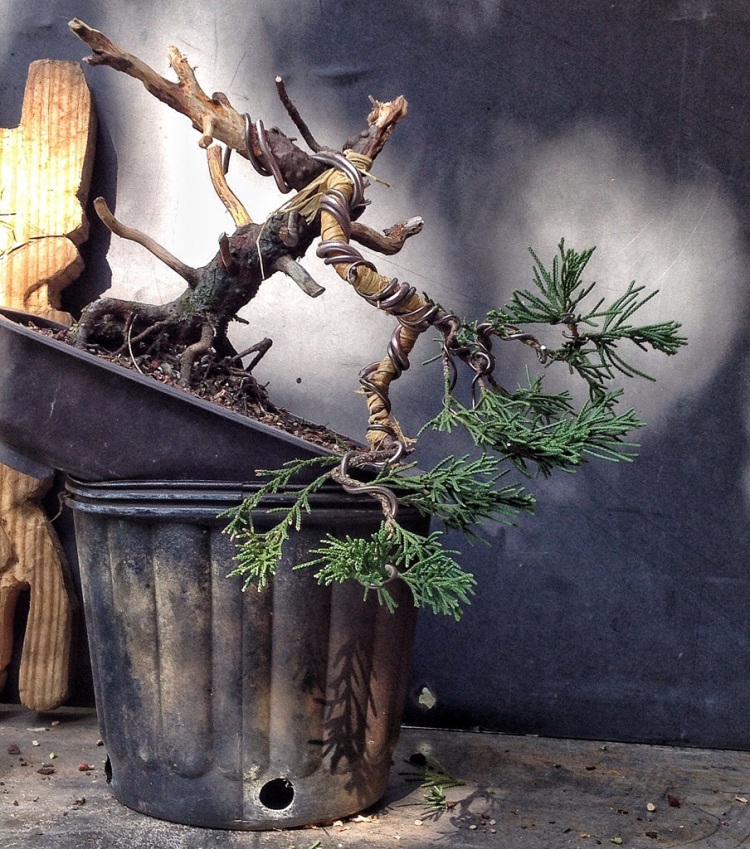 Not too bad, right?
Here are the side/back/side views-

It’s hard to really see what it should look like as it sits in that pot so, how’s this?

Neat trick, innit?
And of course, a sketch-

We have the ugly, awkward juniper that no one loved-

Some pruning, binding, wiring and a lot of bending and (just for my friend Nick)
Bob’s your uncle-

What’s the lesson?
Or is this post just me showing off by giving a rambling, deprecating build up and then styling the tree into a near facsimile of a bonsai?
The lesson-
It took eight years before this tree had the character and structure to make a decent bonsai. Eight years of looking at good trees and watching masters work and styling countless other trees before I had the vision to finally see the tree hidden inside this one.
Keep studying real bonsai, working and wiring every tree you can get ahold of, and, of course, drinking beer. I promise you’ll get there.
Cheers!