Why would I cut back this beautiful tree?

It looks pretty tree-like already, right?
The above picture was what it looked like a few weeks ago.
Here it is now:

Nice winter silhouette but it needs more.
Some of the branches are too long with no movement or taper.

It could use more (a lot more) ramification.
I picked up the tree from D&L nursery in Ocala.
When I got it it was in the middle of a treatment regimen for a leaf spot fungus attack so I had to continue that for a while.
So all I’ve done to it was to put it into this pot last year.
I’m thinking it might be an American elm.
At least maybe.
It could be what they call a “Drake” elm, which is a big leafed Chinese elm (ulmus parviflora) that’s sold in the landscape trade here in Florida.
I’m not quite sure.
Anyway, the changes (as per the title) will be subtle and minor.
And will make for a short post (unless I begin one of my long, off topic divergences……have I told you the story of the night and early morning where I met up with two nude women, Jimmy the Bejeweled One, the Ginger, and the Guitarist Sage in an all night, all-you-can-eat-pancake joint? There was a hot tub, a digital probe, a martyr, and my wife. (Which, if you have a wife, you know a wife and a martyr are sometimes the same thing; at least they’ll say they’re suffering from their husband’s inherent stupidity. I think they’re really laughing at us and just pretending to suffer. I’m gonna get in trouble for that last sentence. )
You haven’t heard that adventure yet?
Maybe when next we meet….I have a tree to work on here!)

How much am I going to cut it back?
Before: 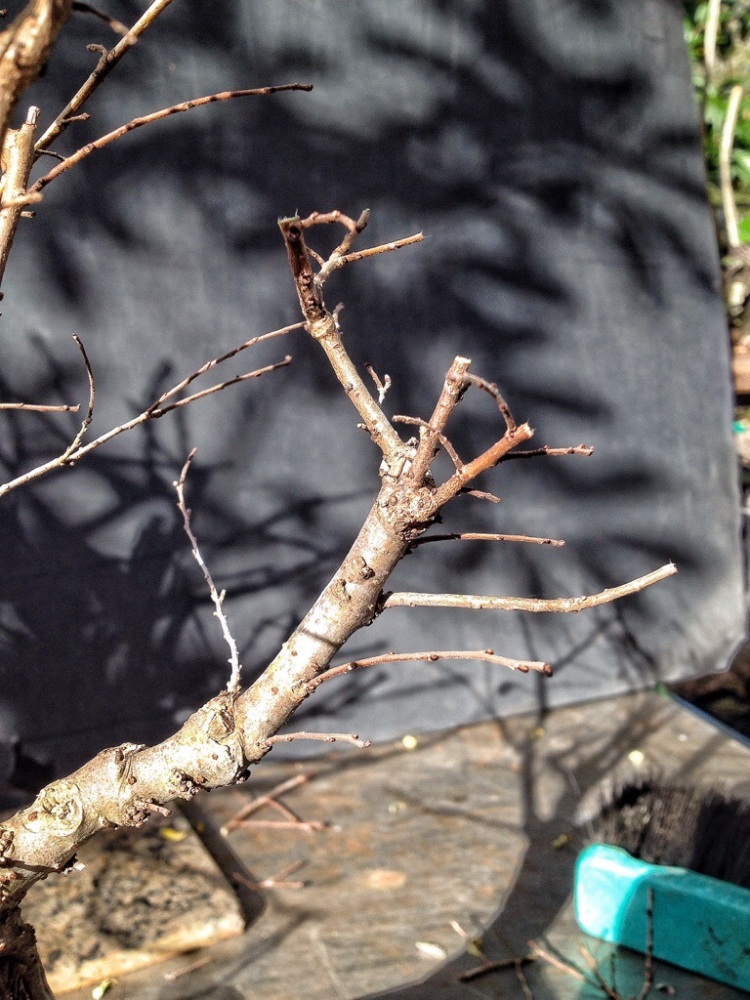 Not that bad of a hack job.

You might still be saying,
“Look at that Mabel, he done gone and cut off all the ramification!”
And I have done that, but to a purpose.
The tree will have better taper and, if I keep up the trimming (which I’ll get 3-4 good trims this year) I’ll have twice to three times the ramification than I began with at the beginning of this post.
And the tree won’t be any taller than it was.
Now, it needs a little wire.
Watch, the side view before:

I gave the tree some depth by bending the rear branches down.
Now the front. 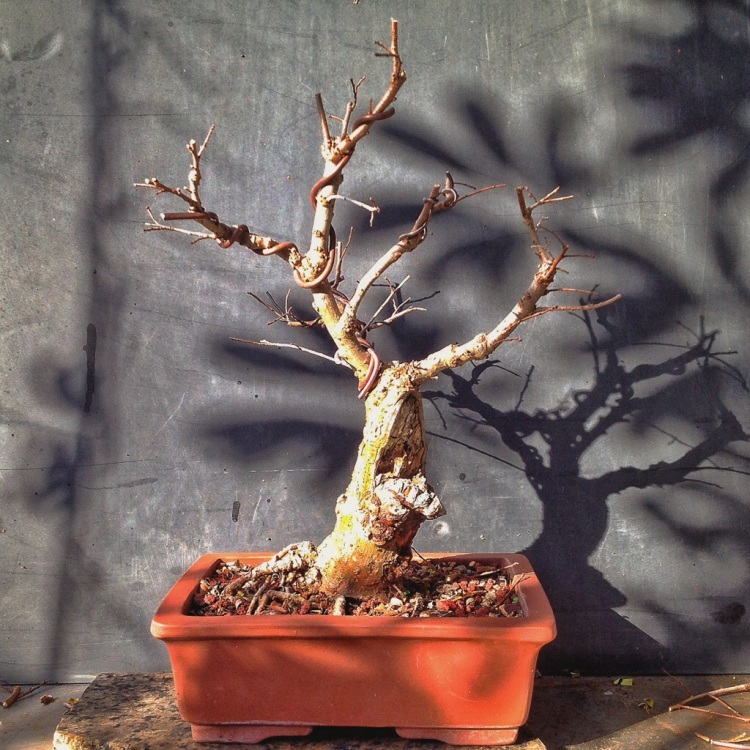 Just a little movement to break up the straightness of the higher branches.
The question some of you are asking is :
Why don’t you just hedge clip this (as many people do, even more advanced practitioners) and the tree will ramify all by itself?
Because, as an artist, it wouldn’t be honest.
First, it would look good with leaves but then in the winter it’ll look haphazard and messy.
It would be like me drawing a tree and just scribbling the foliage in.

You like the rock and the mountain?
Anyway, here’s the before, middle and end to compare in a row. 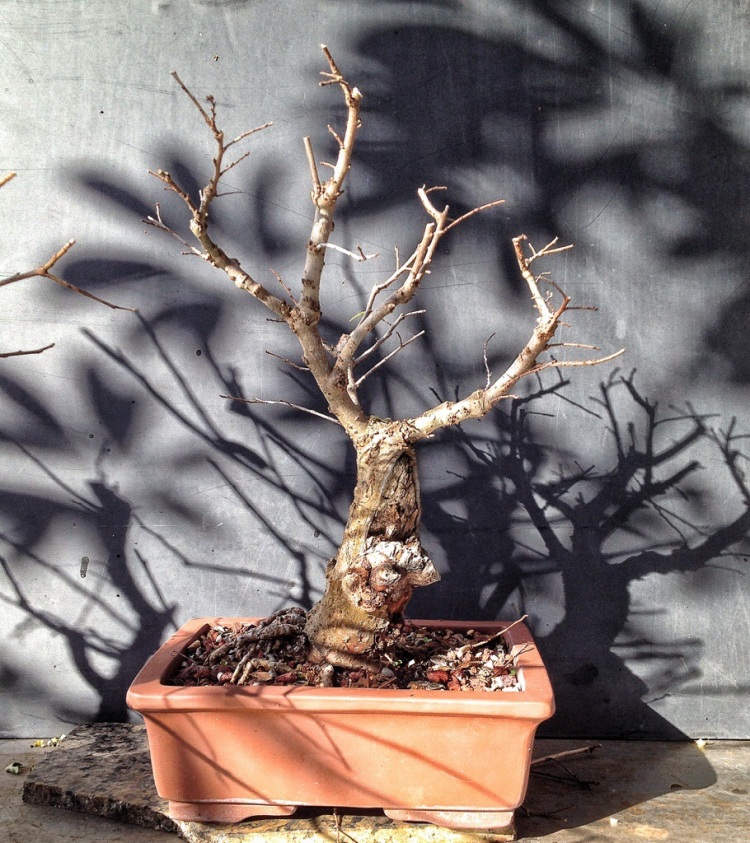 Oh, look for an update where I’ll carve out this odd deadwood feature. 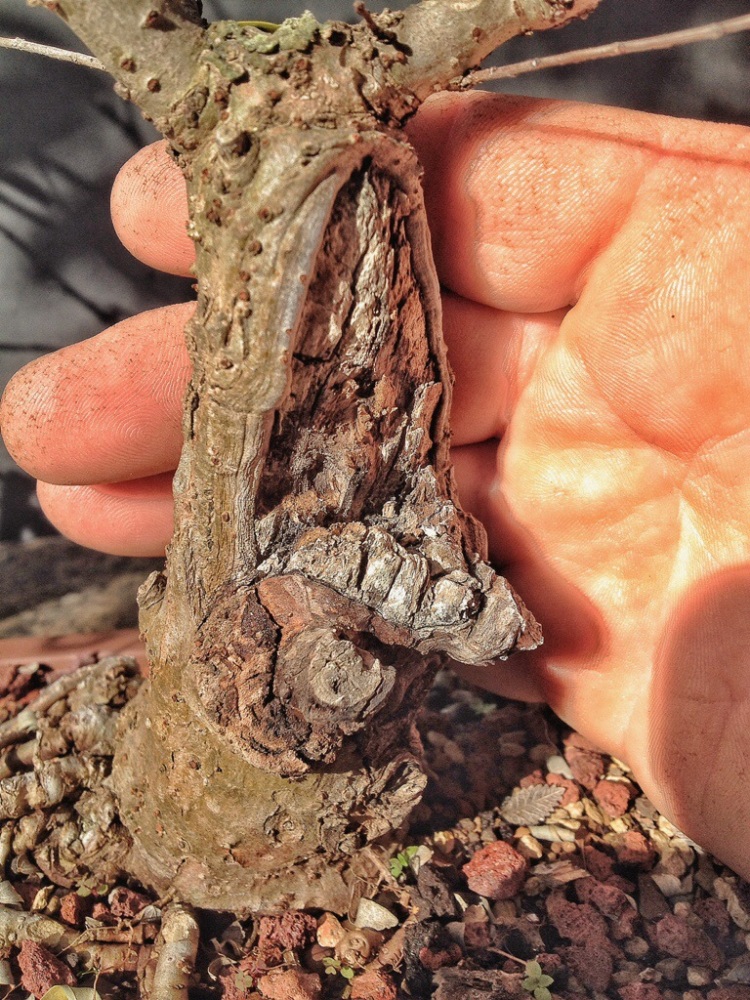