This will be a long term project I think.
Ten years? That might be enough time.
It has a good trunk, which is what one should look for as the first criteria:

It has some nice bark and good character; but the problem is….it goes up… 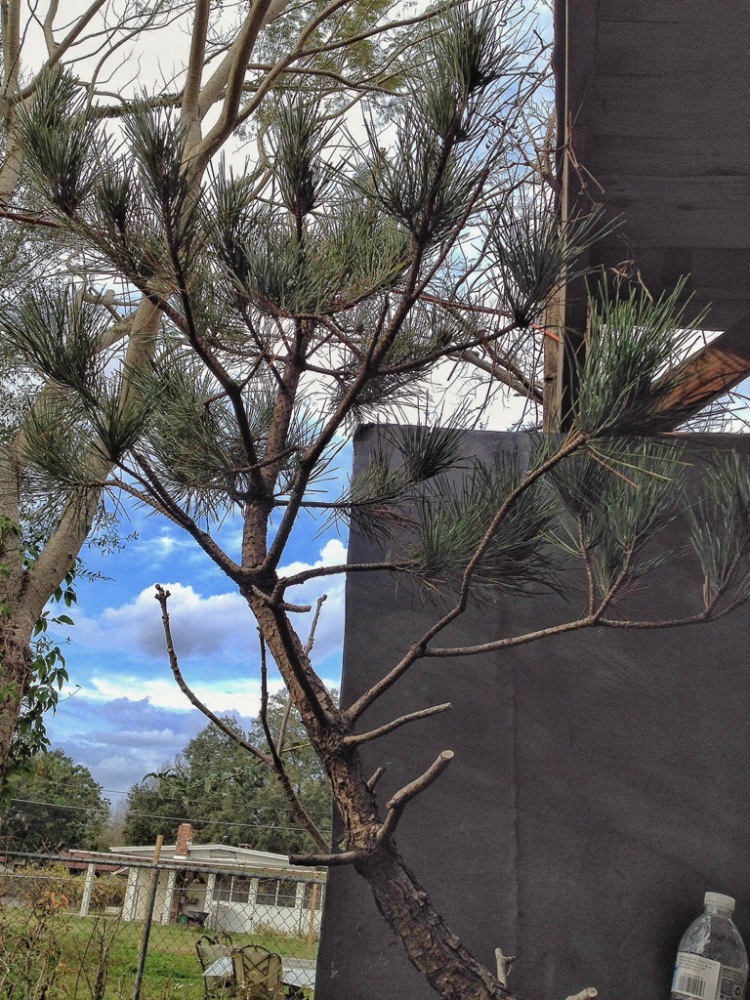 The branches are a little far away from where I need them.
And now you see why I am saying ten years.
But we are together at the beginning though, so come along and join me in this amazing journey.
The lowest branch-

will become the tallest branch.
That sounds somewhat prophetic and pretentious now, doesn’t it?
What I’m going to do today is an initial potting (which means reducing the root ball from a nursery-can size, down to a bonsai-tray size.)
The tree is really pot bound at the moment.

And it does not drain well at all; which is important for a pine, as you might know.
Now, how do I know it’s the right time of the year to do this? Or any root work on a pine for that matter?
Easy.
Ignore the fact that it is mid February; I’m in Florida and this is the time we do root work on a pine, generally.
When I teach seasonality (when to do things to our trees) I prefer to teach my students that it’s better to listen to the tree instead of using a calendar.
As an example, we don’t touch roots on ficus in the winter but I barerooted one in December.
A black pine will be ready for root work when the root tips begin to turn white, like so-

I learned this from one of my mentors, Mike Rogers, who has developed some of the best black pine in Florida.
Black pine? Why is it called black pine I wonder?
There already is a tree called “black pine”, which is the pinus nigra or Austrian pine. Which in German they call it Schwarzkiefer or Schwarzföhre.
Schwarzkiefer means black barrel maker, which I an assuming that it’s a description of the wood; good for barrels. Schwarzföhre, on the other hand, means “black pine”.
Which brings us to our first aside: Arnold Schwarzenegger’s last name means: black ploughman. I was watching an interview and somehow that topic came up. It’s also pronounced: zvarchen-ecker.
And now you know so if you meet him in person you can say his name correctly and, instead of CRUSHING you he might drop you some cash.
GET TO DA CHOPPA!
Ok, so…. The Japanese call the black pine: 黒松
Which, as we all know, says: kuromatsu. And that, oddly (and according to google translate) means: black pine.
The Japanese are so descriptive and obvious in their naming of things; I mean, what is a pinyon and why is a Jack pine called a Jack pine?
Oh, I forgot to tell you why the Japanese black pine is called black. Because the bark is really dark, actually black in places.
That is all. Simple really.
And the Austrian pine (remember that?) the Latin named black pine, was just named before the Japanese one (called pinus thunbergii after Mr. Carl Peter Thunberg, who was a disciple of Linnaeus, also known as the ” Namer of plants”. It’s great to have friends, right?). And they couldn’t have two black pines now, could they?
Damn, where was I?
Ah, right.
This is a post about a specific tree I was going to turn into a bonsai.
Here’s a shot of the base of the tree:

It will improve over time as I am going to put it into a shallower container and that tends to thicken the surface roots.
One more digression before I actually get to work.
This one is important.
Notice the white, fungus-like growth on the roots: 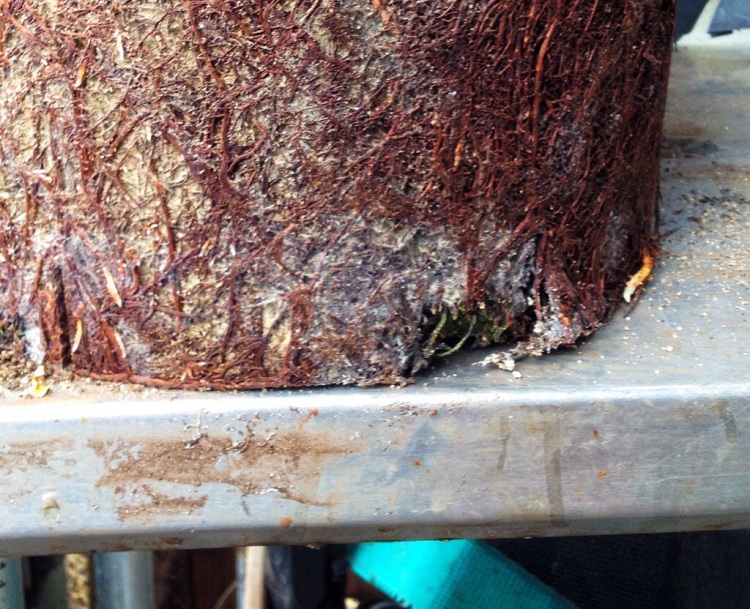 It’s kind of scary if you don’t know what it is, right?
It is actually a fungus called mycorrhizae (singular is mycorrhiza).
And, without going into a long dissertation on it, mycorrhizae is basically a symbiotic, beneficial fungus that help plants (95% of plants have been observed to be infected with some type of a mycorrhiza) in the uptake of nutrients and water.
In the case of pines, they are essential.
Pines tend to live in marginal environments and have evolved this relationship with the mycorrhizae where the fungus gets sugar and carbs and the pines gets a more efficient way to gather water and nutrients.
What does this mean to bonsai culture?
We must infect the soil we use with this fungus (what’s more hostile than a bonsai pot in bonsai soil?) and limit the fungicide we use to topical, foliar applications and make sure it doesn’t drip onto the soil.
Enough stalling, time for some work.

Using a heavy screwdriver type metal dealio I commence to rake out the roots.
It’s more like beating the roots into submission.
This is the most difficult root ball I’ve had to work with. Phew! 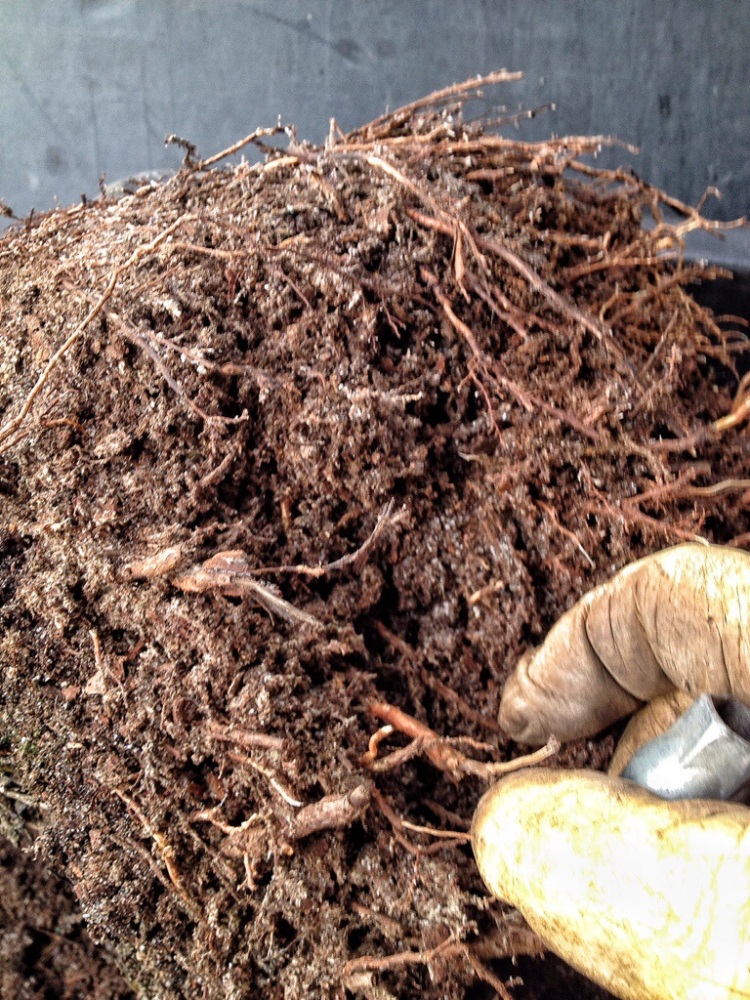 Talk about root bound.
I had though this was potted in pure sand but I’m finding out that it has a lot of pine bark in it.
An interesting factoid for your memory banks: pine trees grow best (according to the USDA/Forestry Service trials investigating pine bark as a soil amendment.) in pine bark.
I don’t recommend using it too much in your bonsai soil though. The trials were using regular size nursery containers and in the ground.
Not bonsai containers.
Bonsai pots need freely draining, coarse soil.
Unfortunately, pine bark breaks down too quickly and clogs the drainage holes and then we have slow drainage.
And pines, as I said earlier, need fast drainage.
The soil mix I am using for this pine:
1/3 Aoki Brand mix, 1/3 Japanese pumice, and 1/3 my own SuperMix.
Which means a little akadama, a little pumice and a little pine bark; plus all the other stuff: expanded shale, slate, calcined clay, lava rock, Japanese river rock, etc etc.
Here’s what it looks like: 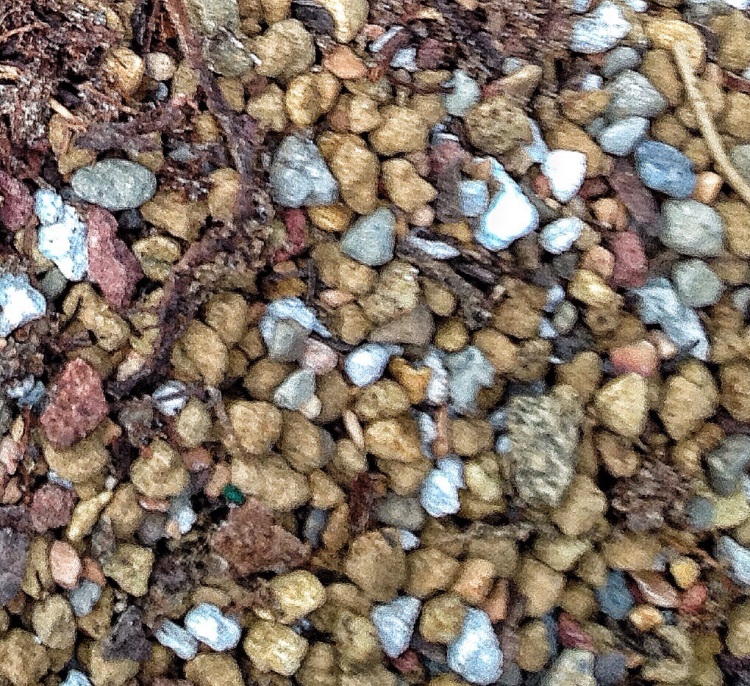 Oh! I also added some of the old soil (sifting out the fines of course) in order to infect (it makes me cringe when I hear bonsai professionals say “inoculate” instead of “infect”) the soil with the beneficial mycorrhizae.

Righty on then, all potted up in a wider but shallower container. 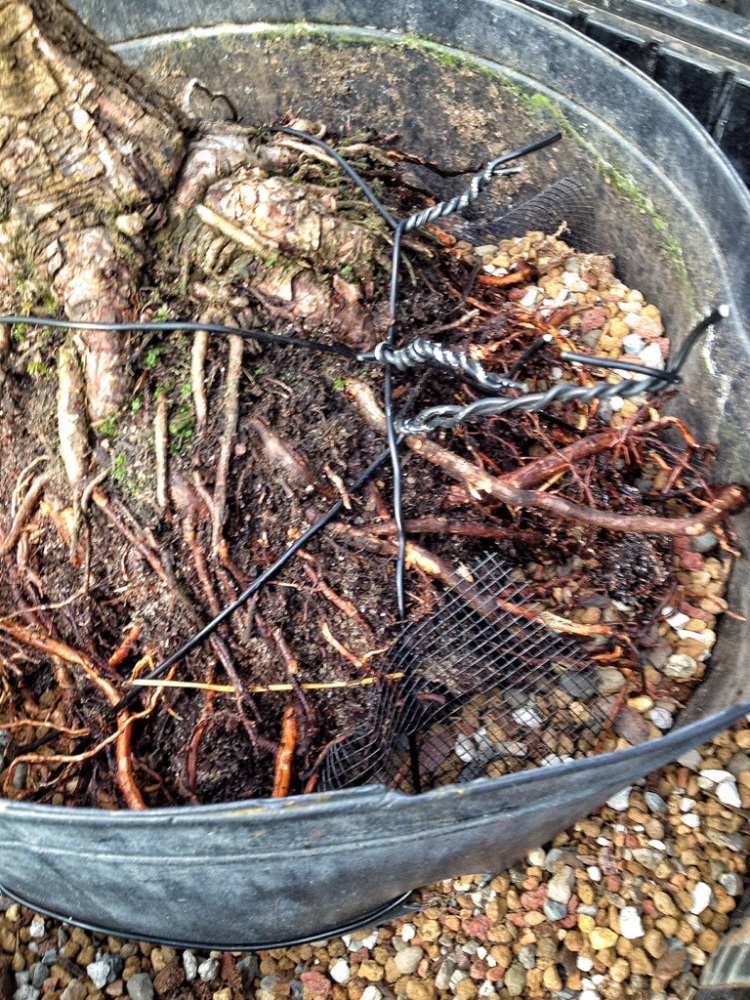 And back filled with the “SuperDuper Modified Aoki AAAB SuperMix.

And what is that big old hunk of pine bough next to the tree?
Instead of cutting this tree down to that first branch and risk killing the tree, I’ll make several cuts over a one or two year period.

I’ll also try to develop that first branch a bit, maybe some wire and candle pruning.
We shall see, I do have ten years.
I’ve discovered this product and I’ll try it today. 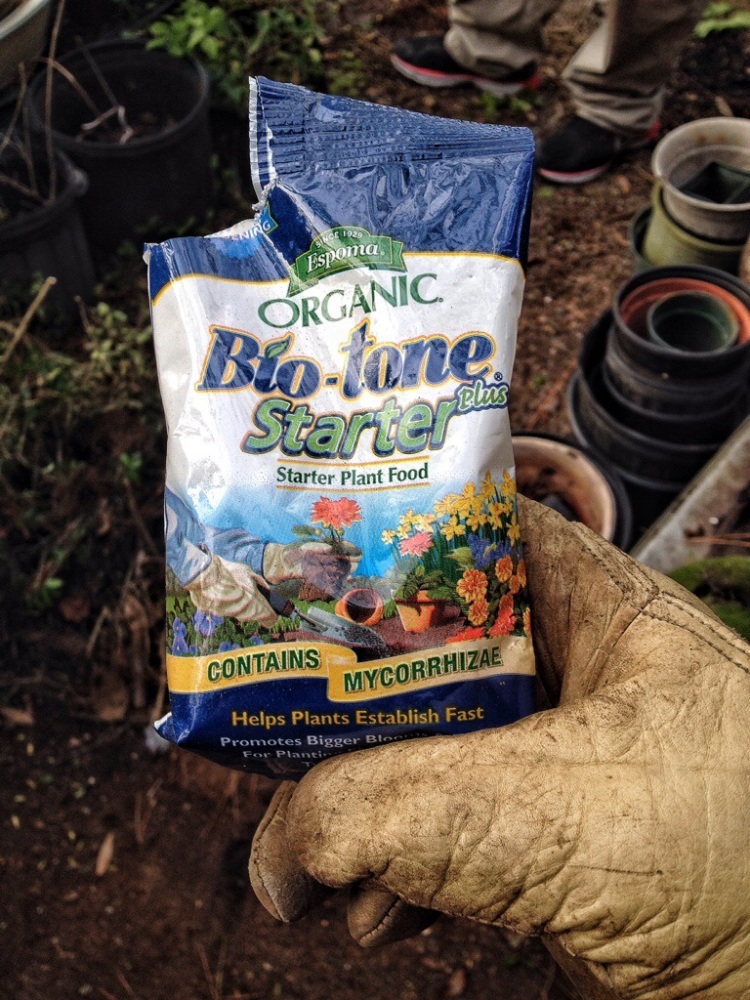 It shouldn’t hurt. It contains mycorrhizae.
I actually plan on using it on all my newly potted plants this year.
Here is the tree now: print it out on acid free paper for reference ten years from now-

And this is my sketch (you knew there would be a sketch, didn’t you?)