Now, I know that all the Japanese-philes out there, and I really mean those who know Japanese, always cringe when they hear us flat-landers call our collected trees “yamadori”.
Technically, a Yamadori is a tree collected in the mountains and, obviously, there aren’t any mountains in Florida.
Unless you count Space Mountain.
But I get your attention better if I use the word.
Sooooo….Yamadori!
Anyway, I was recently given a collected tree by my good friend Bobby, who is going “out country” for an organization he created.
Since he’s going overseas and not able to take care of his trees and he can’t take them along with him, he has sought out some local curators to take care of his favorites.
Therefore, I have been entrusted with several of the trees and with certain assignments and tasks to perform on each one (mostly it’s “carve the shit out of it”…) and also a strong admonition to keep them alive.
I would have done it as a friend but Bobby’s nature is a very (VERY) generous one, so I am now the owner of several big trees.
This post will be about (as the title might suggest) a celtis laevigata, or southern hackberry.
Here it is, in all it’s glory!

Sorry, a little photoshop to give it some drama, but when Bobby said it was mine that’s what it was like.
The chorus in the background “ohhhhhhhhhhh” the halo of light, cherubs with harps flitting around…..all that.
Yup.
Here it is in a more normal light.

Impressive, no?
A close up of the bark and trunk.

The tree does have flaws.
The original trunk chop will never heal but I think I can figure out something to do with it, to showcase it or hide it.

The exposed rootage on the nebari will need something done to it as well.

But if I didn’t have any work to do to it I wouldn’t have any fun now, would I?
Speaking of work, let’s get to it.
First, I feel the need, the need…to weed! 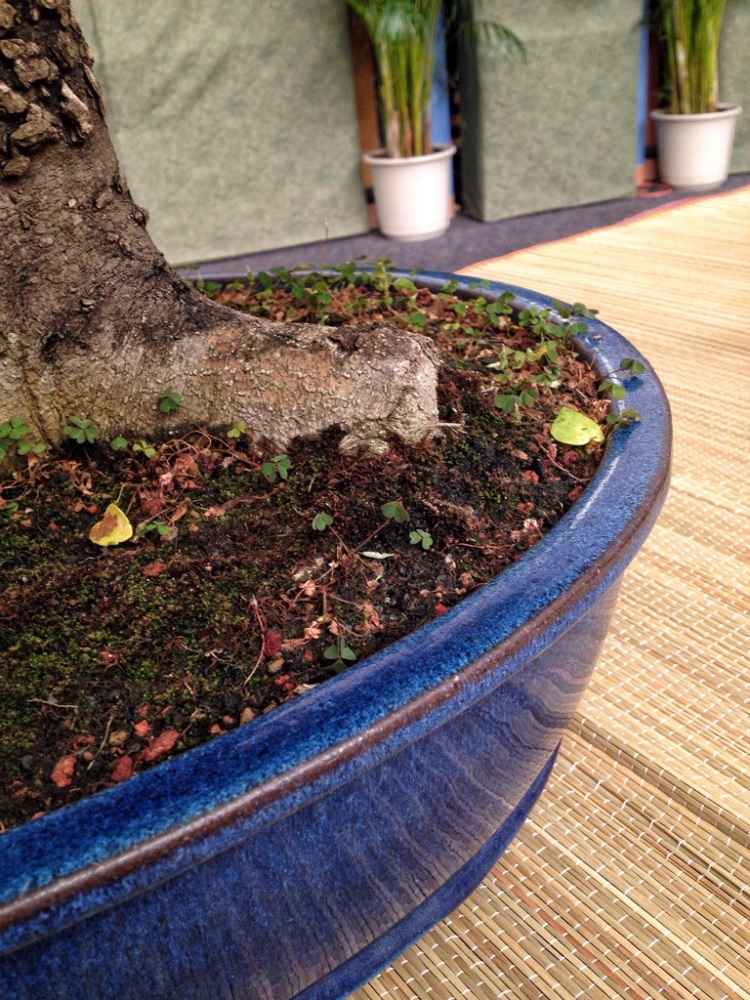 The tools of choice:
Chopsticks-

And even Jin pliers!

Wasn’t so hard, but I didn’t get them all.
It’s the clover looking things that are a bitch.
It’s called oxalis, it should be called “pain-in-my-alis”.

If you miss even just a tiny bit, it grows back. It’s like a bulb (it’s actually called a corm) and it puts off little baby plants from the roots.
Which means that if you pull the big one out, you’ll leave the babies behind.
There’s a joke that could be made but I’m not going there.
Now…time to tackle the bush.

In case you were wondering as to my location, I’m doing this at Epcot at the Central Florida Bonsai Club’s Meet ‘N Greet table.
It’s an interactive event, in partnership with Disney, to provide to the guests exposure to the Art of Bonsai.
It takes place at the Festival Center during the International Flower and Garden Festival on the weekends.
The Festival is over for the year but next year, if you’re in the Disney Parks between the months of March and May, come to Epcot to say “Hello!”
Anyway, I’m telling you all this to explain why it looks like I’m in a weird place with random people just walking around.
Like this young lady, she looks like she could be an officer for the National Junior Horticultural Association.
An organization that just happens to be having its convention next year in Orlando. 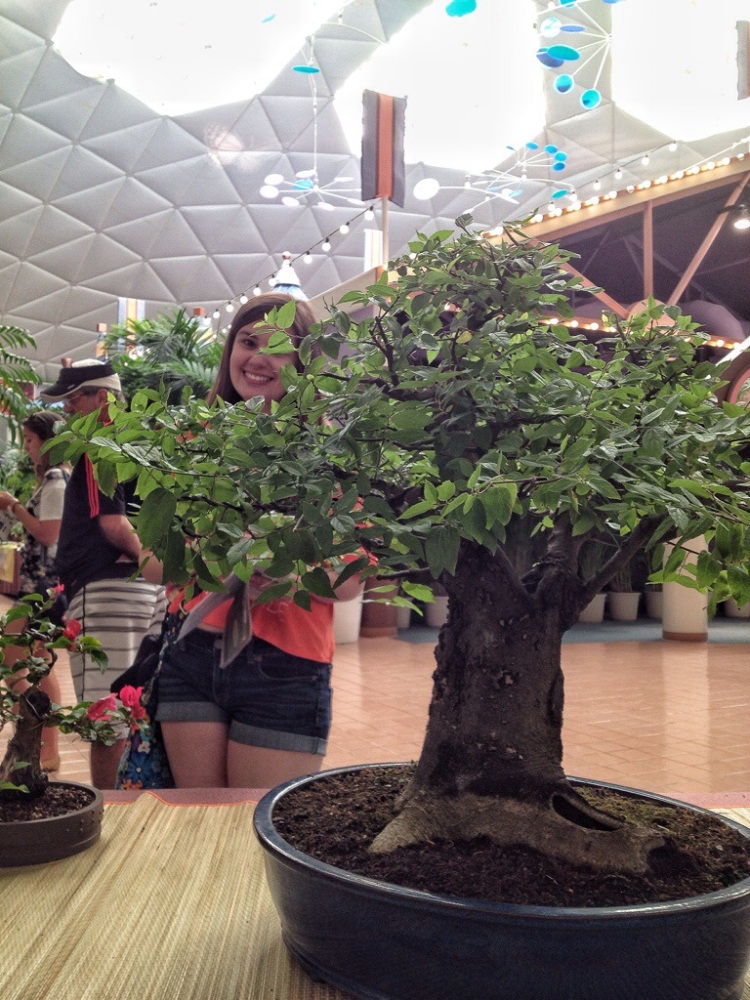 Actually, she is one of that fine organization’s officers.
Check out their website, maybe make a donation to help support them in their educational efforts (www.njha.org)
Back to the hackberry.
A funny name, hackberry, isn’t it?
What is a hackberry?
I’m not meaning the tree, though I’ll get to that, because it might give us a clue to the name in the end.
Celtis laevigata is generally called, in the south, sugarberry. The reason why is the fruit.
It is, apparently, very sweet when ripe.
I have not had one, I’m originally a Massachusetts boy and I had never heard of a hackberry until I began my bonsai journey.
The fruit also stays on the tree all winter, making it very good food for wildlife or the lost hiker running away from the stray black bear or alligator.
Which brings us to the distinction between celtis occidentalis (common hackberry) and c. laevigata: the former grows on hills generally and the latter, in wetter locations like riversides and wetlands.
Don’t ask me why they call it sugarberry (besides the sweetness of the fruit) as opposed to hackberry.
I guess as the fruit ages it becomes much like a date, which I’ve had and can attest to the sweetness of them.
I can’t really tell you what the name hackberry means either, except that the hack part of the name is very similar to the word hag. And, as we all know, hags have warts, which the bark of a hackberry does too.
Hag-hack.
I suppose if you have a mouth full of chewin’ tobacco they sound the same.
Coincidentally (or maybe not, the mystery deepens) the Greeks call their native hackberry (c. Australis) the honey berry.
Pliny the Elder, rockin’ dude that he was, named the species celtis, which means a lotus with sweet fruit.
Is there something deeper here in the naming of the tree that’s been lost to history?
We have a tree that’s been described as a hag like or even, in some cultures, a witch tree.
We have a fruit that is very sweet and nourishing, lasts through winter, but is a difficult fruit to acquire (I should mention this now, the tree can get to be about a hundred feet tall).
We have a Latin name meaning lotus (a metaphor in many cultures meaning a link or bridge between the worlds) with a sweet, hard to obtain fruit.
Are you seeing the matrix yet?
Hackberry occurs on every continent except Antarctica, was one of the first foraged foods of our Paleolithic ancestors and, like all deciduous trees, dies in winter but is reborn in spring.
Perhaps the hackberry had a deep meaning to primitive man that went beyond it being a mere food source that has been lost to modern history. But little clues, dropped here and there like breadcrumbs for us to follow back, are all that’s left of this mystery.
Maybe the hag, the lotus and the sugarberry are the protagonists in an ancient myth about our ascendency from animal to man in a lost winter year, trapped on a prehistoric riverside, cold, starving, but willing to climb that towering tree, so near the heavens where the mighty gods dwell, daring an elevation out of the mud from whence we emerged.
Whoooaaaa man!? What am I smoking?
I don’t know, but I do know that I love a hackberry bonsai.
If you don’t own one perhaps you’re just a little too facile to get into the spiritual and mysterious side of the trees we use.
That was a little long winded and weird but, ultimately necessary.
I think.
Maybe not, but I had fun researching it and asking why.
How about a photo?
Here’s that warty bark I was talking about.

Imagine trying to climb that while naked, searching for that high hanging fruit with your low dangling nuts so exposed and defenseless.
Maybe that’s why I work on bonsai; easier to prune and less abrasive to the naughty bits.
The main task with the tree is to bring it back through pruning to induce some taper and movement in the branching.
I have to remove this wire too

Get to it then, you long haired, squinty-eyed intellectual, let’s go Lavigne! Stop examining your navel.

These little branches and ones like them are out of place and should go.

There are several areas of dieback like this that just need to be cleaned up.

This branch is too long with little taper.

Before I begin, a before shot. 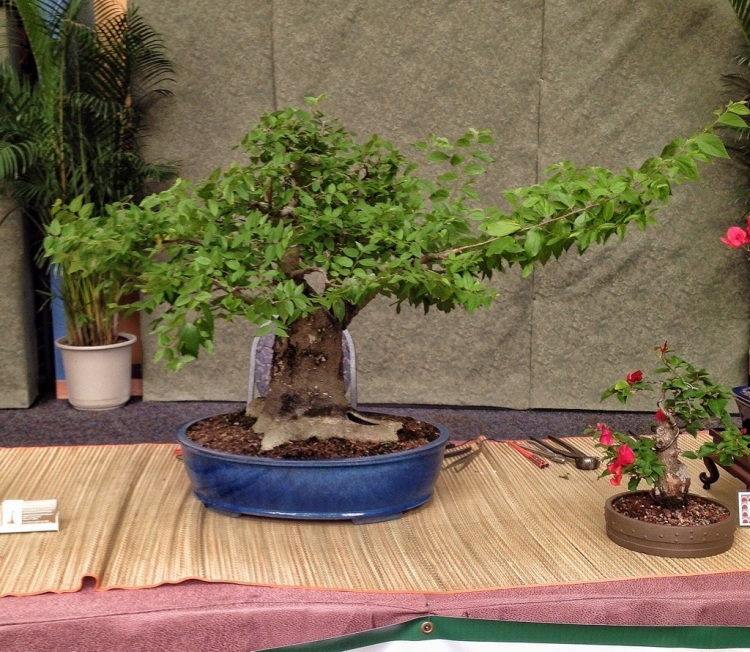 And now some mayhem. 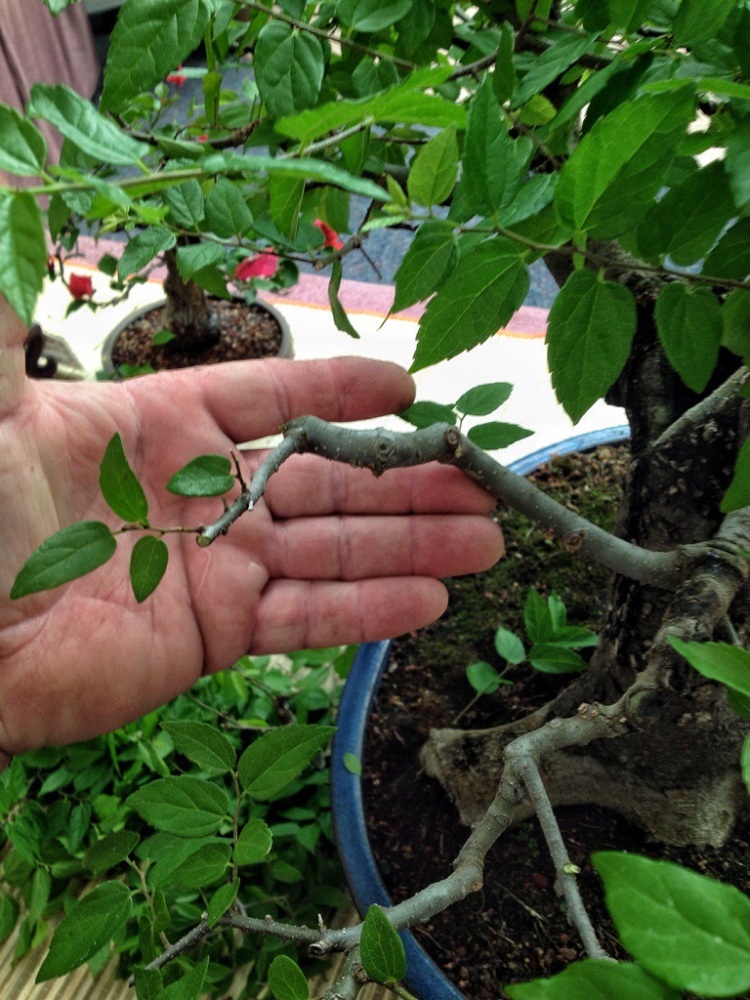 A bit of decapitation. 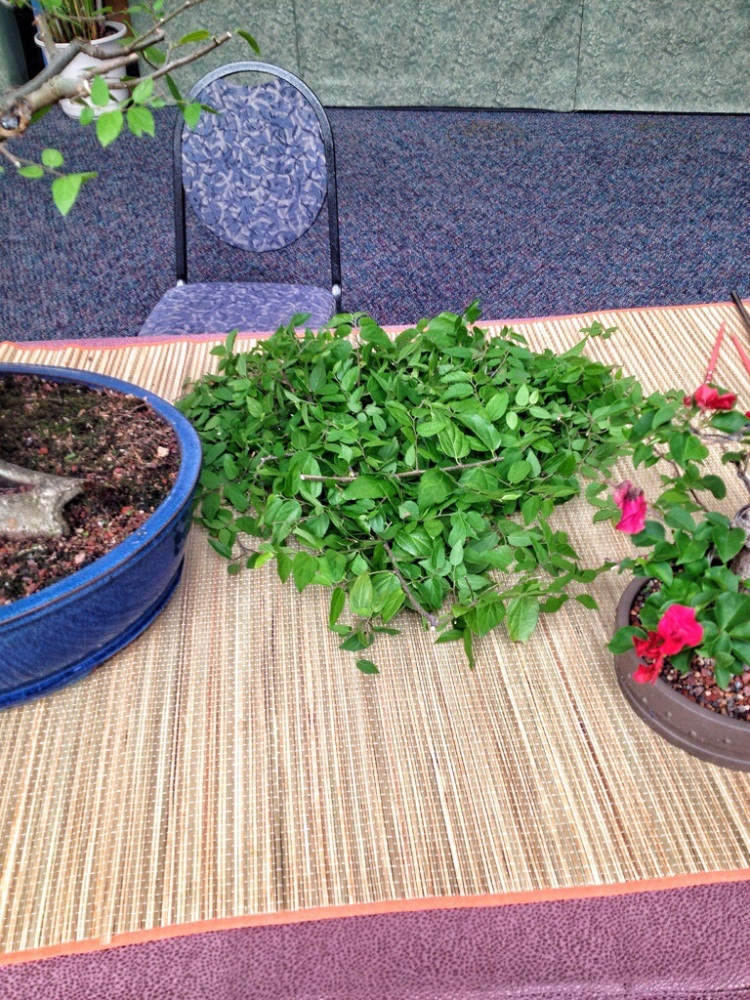 The biggest change was turning the tree around and, in the turning, I lowered the left, rear apex.

And the pruning is done.

Since it’s Mid-May, I can’t do any root work, so I’ll have to do a little iPhone doodling to show what I will do.
These two roots look like dried up ham bones.

This is a good, proper looking root.

Commence doodling.
As is-

As it should be- 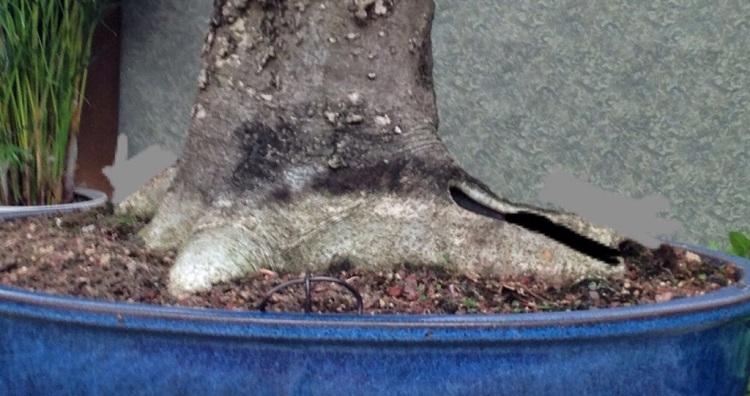 How will I achieve this?
Aha! You’ll have to wait until next January for that process.
Basically it involves power tools and baling wire and a little bubble gum.
Maybe some duct tape too.
Here’s the pruning progression so you don’t have to scroll back through all that text you probably skipped anyway. 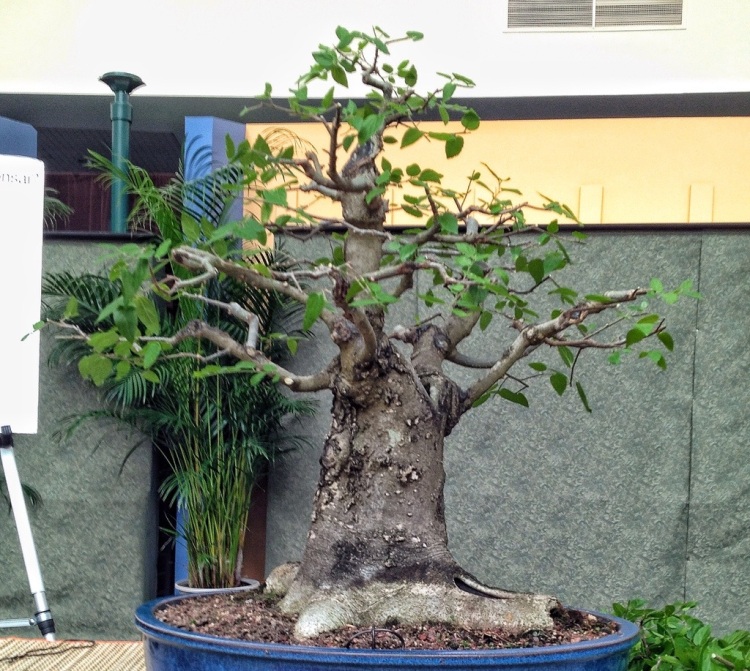 And because I have the app opened anyway, here’s the future digital doodle of the tree with some leaves back on it. 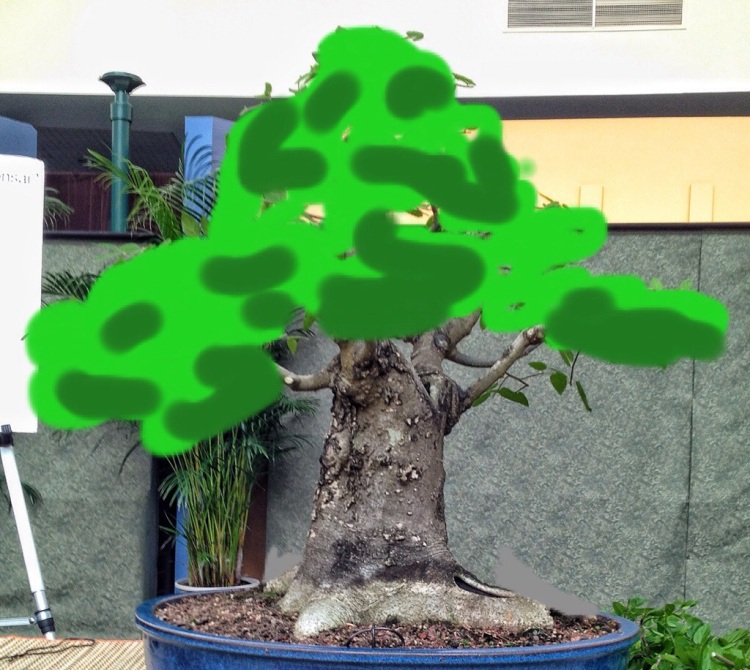 It’ll be like that in about two weeks.
No, seriously.
A hackberry is very fast growing and very forgiving.
It’s very much a good beginner tree and I recommend it for everyone.
Thanks Bobby, I shall not disappoint in my stewardship.